Art as Home for Jean Lowe and Kim MacConnel

Two artists challenge conventions in their Encinitas home, where nothing stays the same for long and art is everywhere 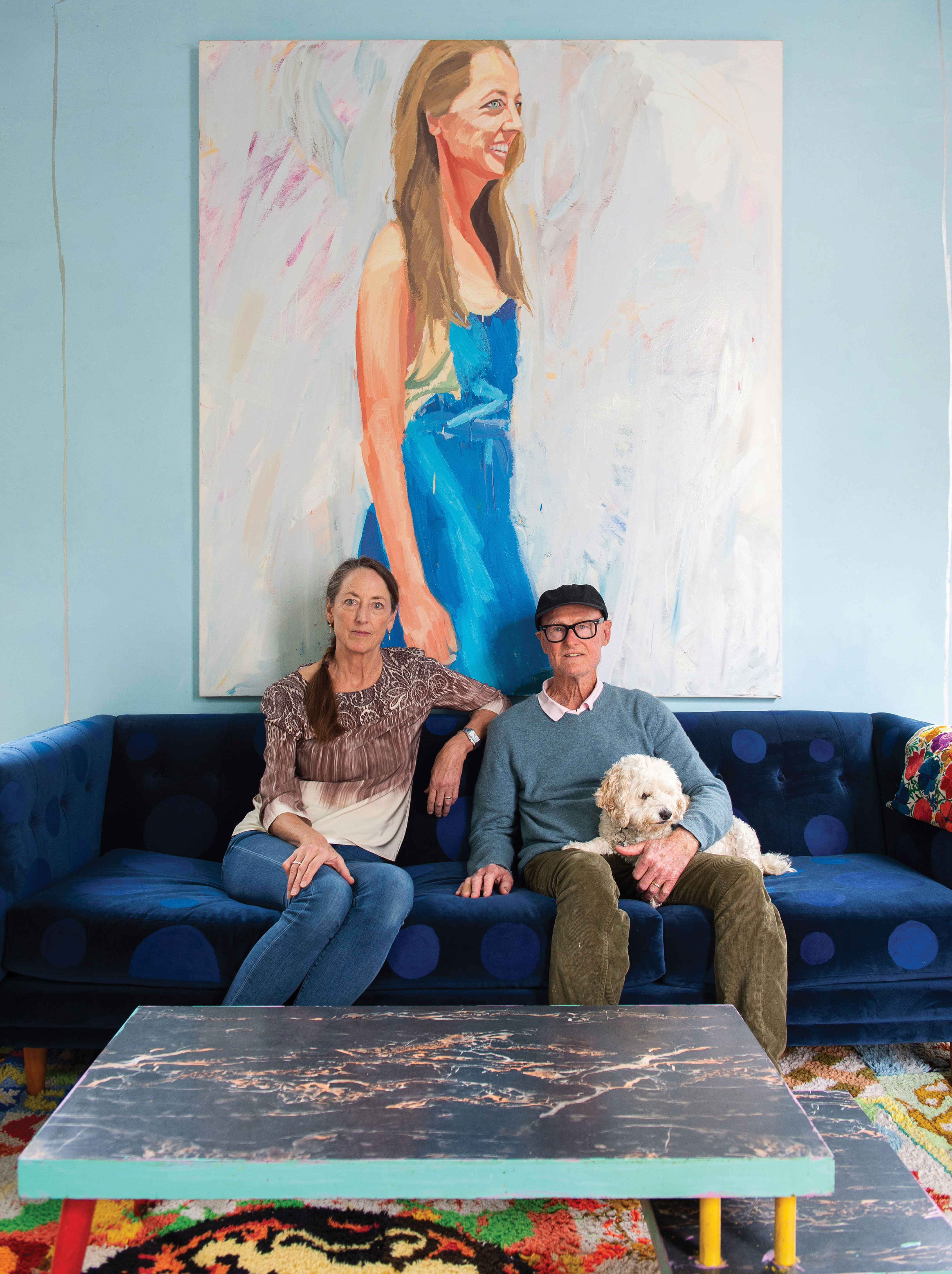 Rare is the house that can carry on a lively, shape-shifting, ever-new conversation with its owners for decades. Spaces, light, shelter and emotions all take the stage with artists Kim MacConnel and Jean Lowe in their home in northern San Diego County. Theatrical storytelling, humor and sheer delight are part of the script as well.

The couple, in partnership with the architectural team of Ted Smith and Kathleen McCormick of Smith & Others, turn homeness into a swirl of convention-challenging conceptual and decorative art—most of it their own. As you walk through there’s no telling what may emerge next onto the set, and it’s been that way since 1995 when the house was completed and first featured in San Diego Home/Garden Lifestyles. 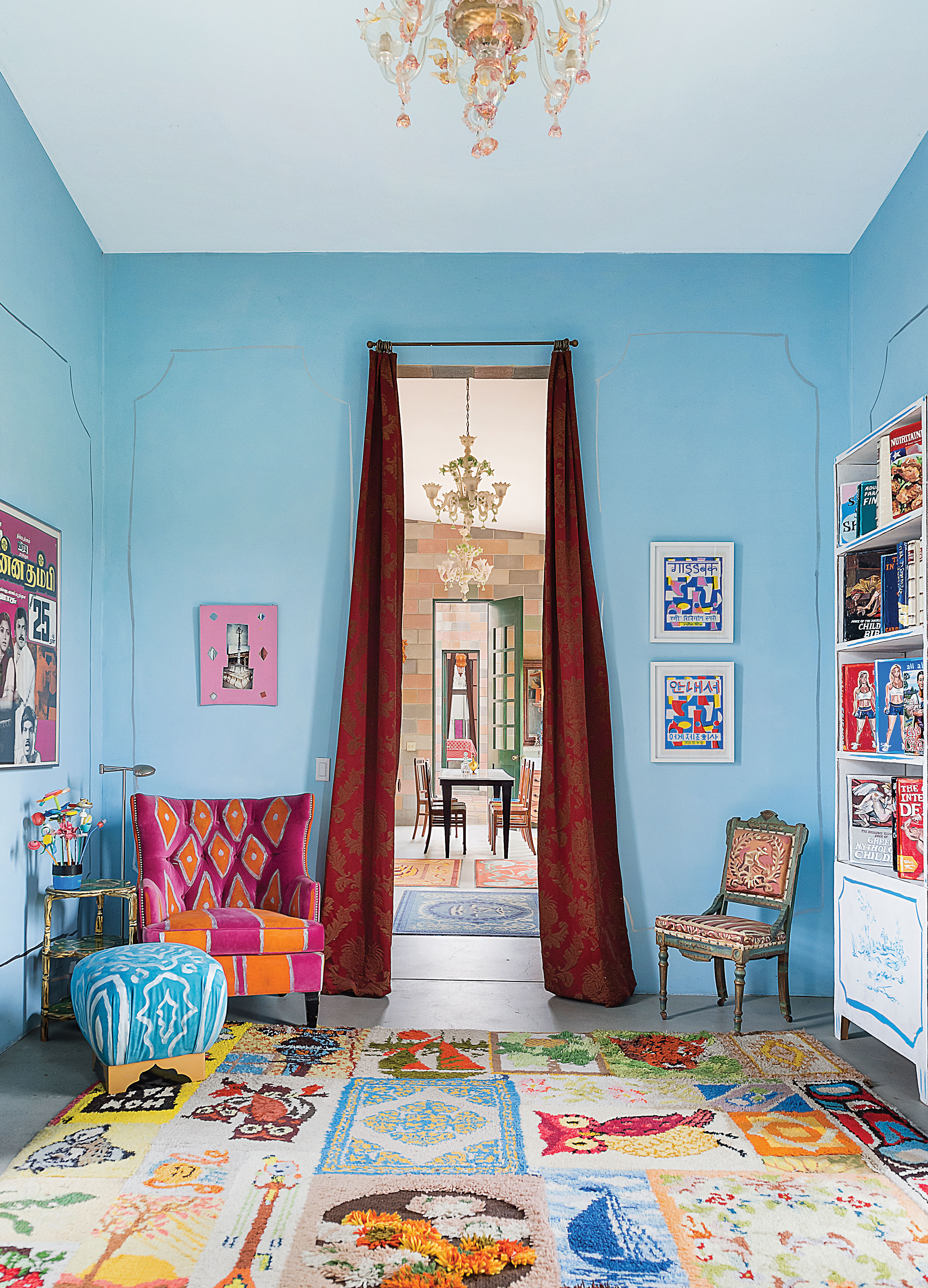 Visitors are struck not only by the depth and height of the living room, but the riotous colors and shapes of furnishings and artworks, almost all created by the artists-homeowners.

On a visit in person, you quickly learn to expect the unexpected, even when it comes to the property’s beginnings. This isn’t a simple “let’s build a home” story. Kim, an internationally renowned artist and leader in the Pattern and Decoration movement since the 1970s, had been bringing mango seeds back from various foreign climes with the hopes of planting them in San Diego. He found a piece of open land in Encinitas that seemed well-suited for mangoes, he bought it, and it wasn’t. 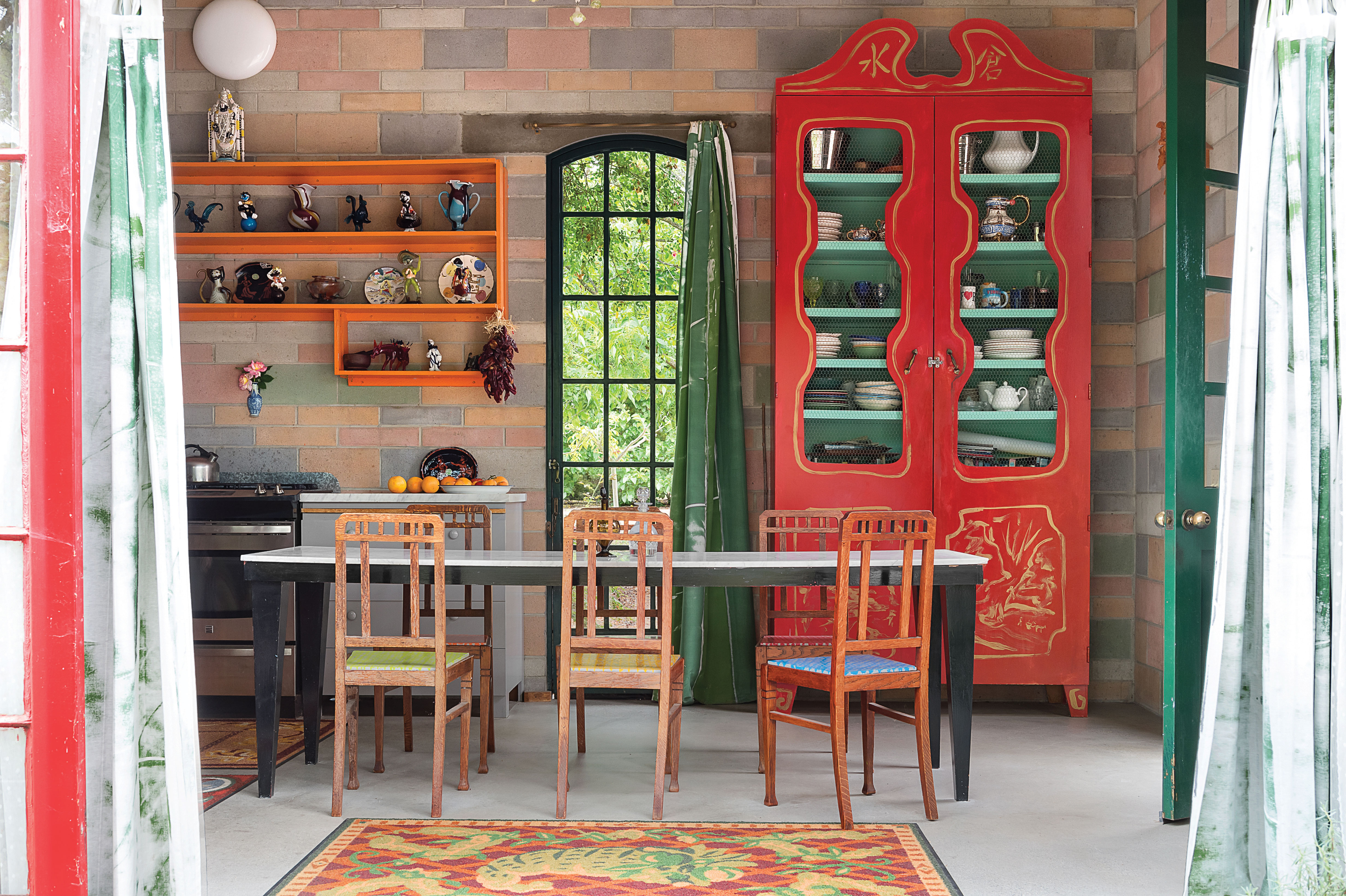 The heart of the house may be the kitchen, where shelves of salvaged wood hold a collection of glassware from an abandoned Tijuana glass factory. An armoire holds an eclectic dishware collection.

“I planted 40 of them, and by late October they had a ring of brown leaves on the ground and I thought, ‘What’s doing this?’ Over the next month it kept creeping up—the frost—coming up out of the wetlands. So basically I decided to grow peonies.”

And build his studio. But the newly formed City of Encinitas disagreed.

“They said that I couldn’t be an artist here because I’m in the same category as a battery-cleaning operation or a car wash…things like that. I said, ‘Well, how can I keep this as a studio…?’ And they said, ‘Well, you could build a house.’ Kim asked for the definition of a house’s minimum size. The city said, “It’s not the size. A house has to have a living room, bedroom, bathroom and a kitchen.” So, Kim says, “that’s what we set out to do, not as a square, but elongated because it preserves more of the property for growing things.” 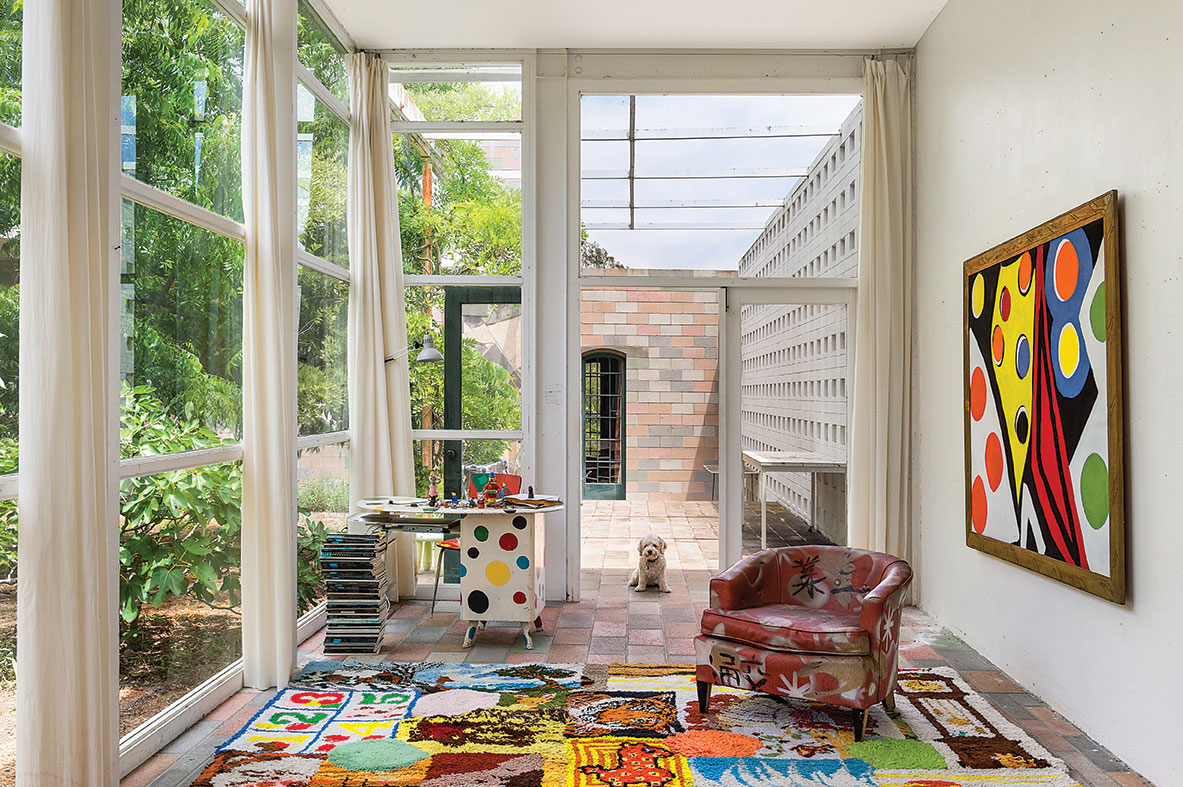 Kim and his partner Jean—an artist well-known for her inventive papier-mâché “books” with hilarious, genre-twisting titles—soon found themselves sitting in Ted and Kathleen’s office. 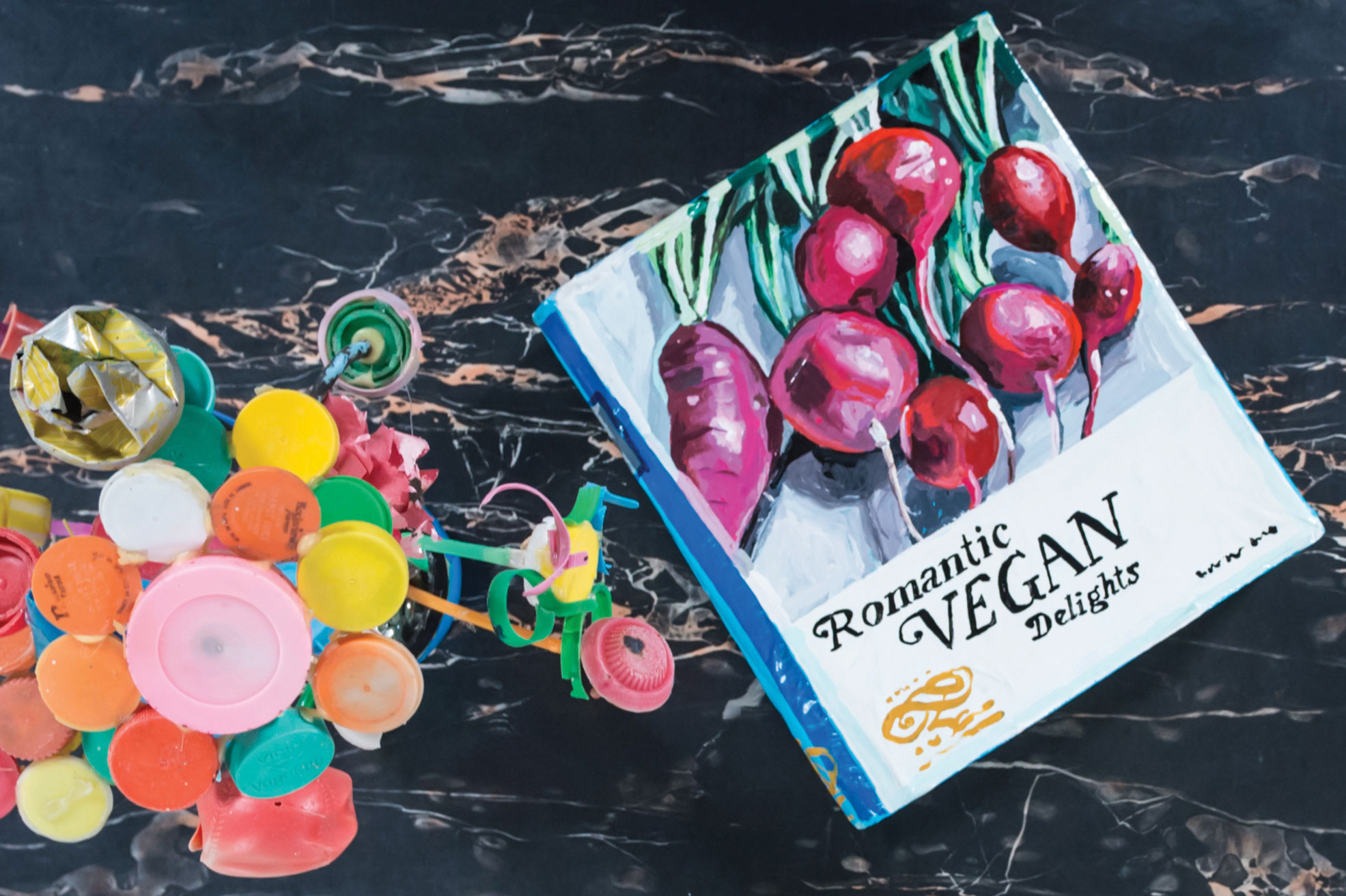 Two artworks—an enamel-painted papier-mâché sculpture of a cookbook by Jean and “Beach Bouquet” of found beach plastic by Kim—challenge the norm of what to display on a living room’s coffee table.

“We were conversing in a room where I felt ‘Wow, this feels great,’  Jean recalls. “Small but not small feeling because of the tall ceiling.” 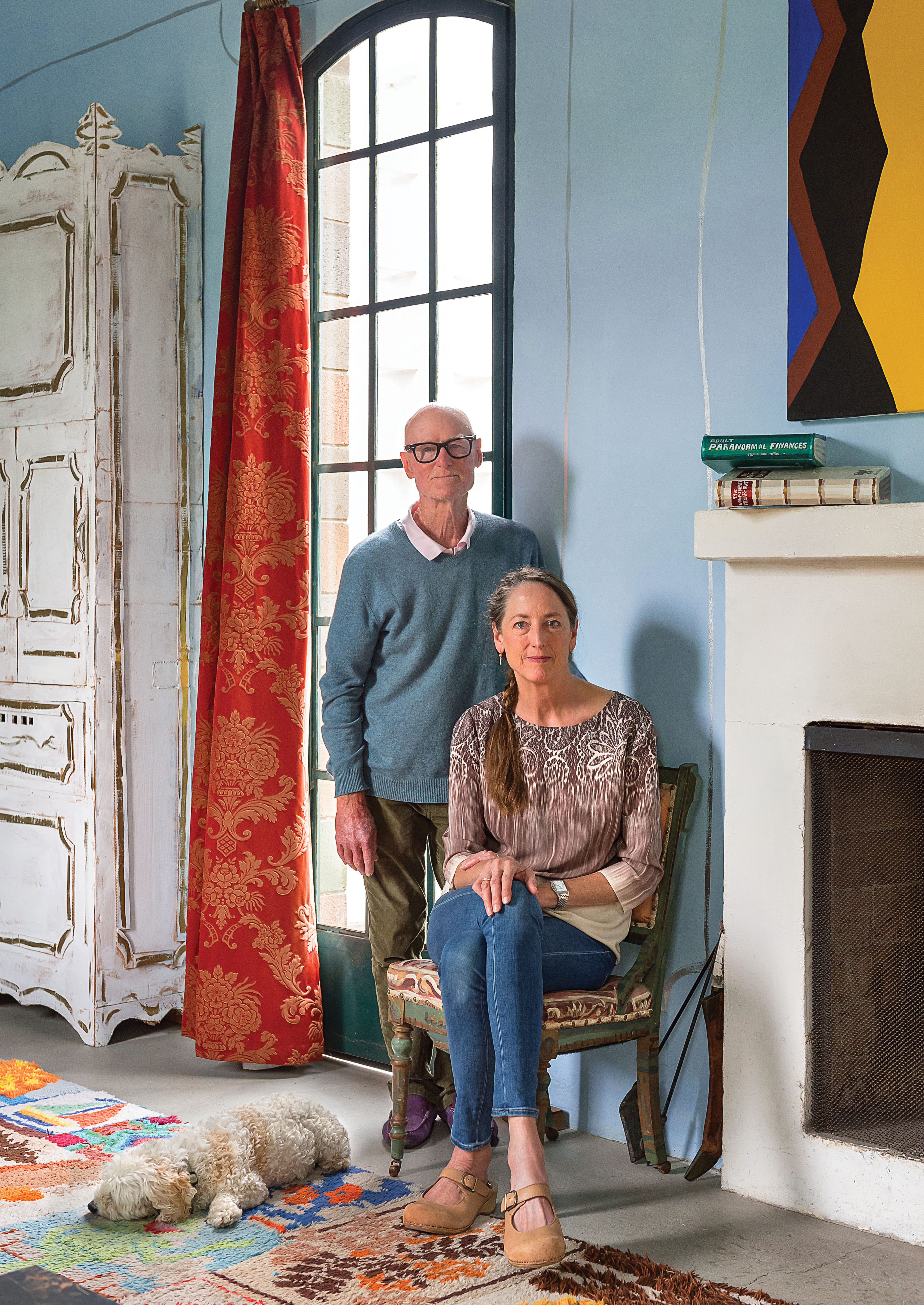 Talk evolved into a design on paper: Four identical-size rooms emerged, all in a row, with one of the rooms an open-air space between kitchen and bedroom. According to Ted, Kim told him, ‘I just want it to lay on the ground like a log,’ and “It was the best advice that I’ve ever gotten.”

Materials? “I wanted masonry,” Ted recalls, “and being a little stricter than Kim and Jean I pictured something orderly, but they wanted random color blocks.”

“We used to go backpacking a lot in the Sierra Nevada Mountains and take a different route home through the Central Valley each time,” Kim explains. “We passed a house that had a cacophony of brick [types and colors], and we decided to maybe use that idea someday. For Coastal Commission [approval], Ted and I went down and created an argument that the fracturing of color, rather than being solid, would make the house more camouflaged. It was a spurious argument, but we got approval. So we decided to make it truly random. We gave the ‘hopper,’ the guy who passes the blocks to the mason, the say in when to use a green.” 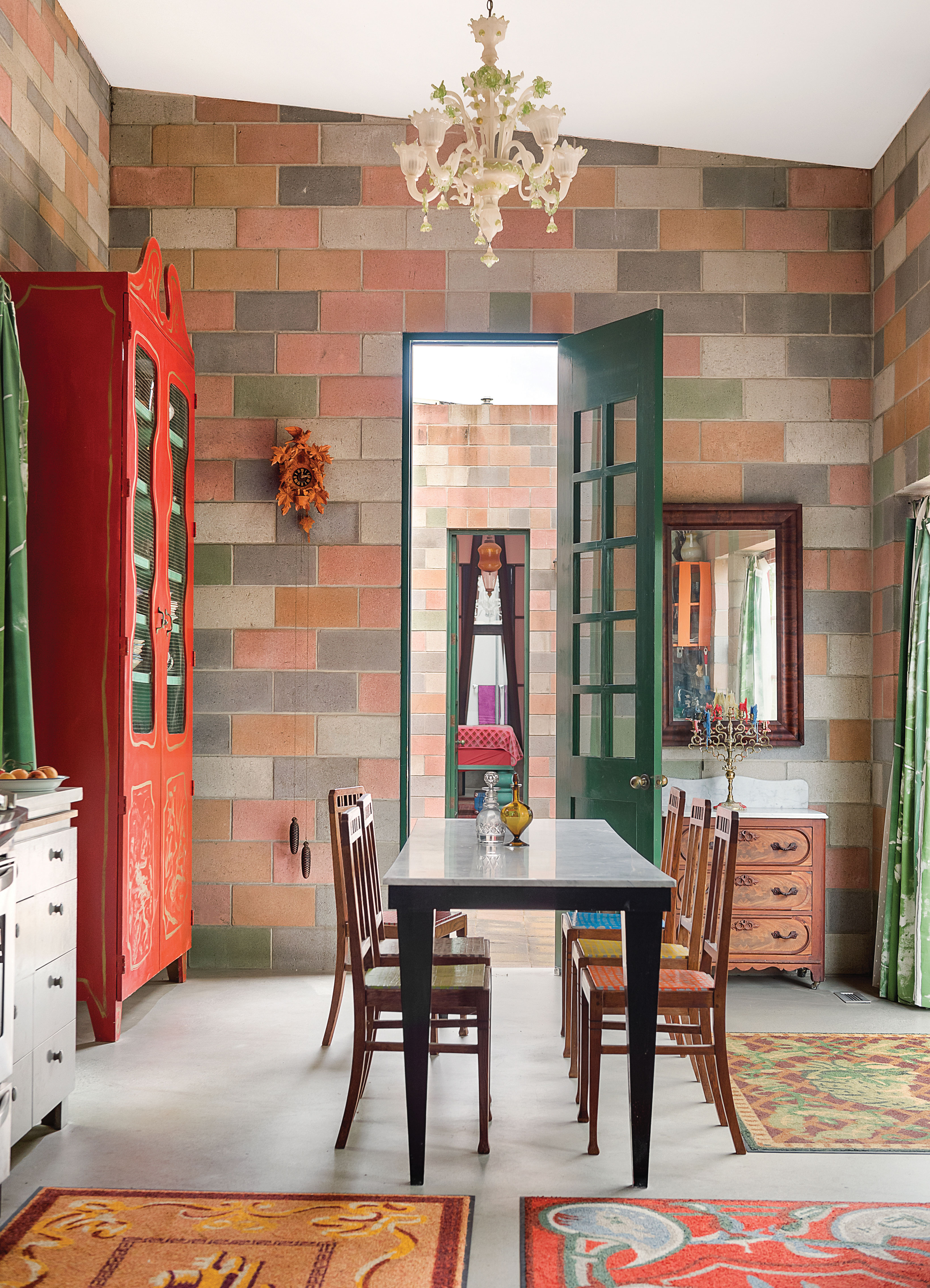 In the kitchen, even the long, tapered legs of the table play off the houses extreme verticality. Industrial rugs on the floor are copies of original public artworks by Jean created for the Point Loma Wastewater Treatment Plant.

Inspiration often comes to Kim from what art critic Richard Marshall described as “a delightful expedition to explore absurd imagery,” but is not limited to that. Both Kim and Jean are cultural omnivores who gather commercial iconography, social morays, found and castoff objects and scholarly historical references into their homelife. Their art and lifestyle become one, but so many of their interests are classical that the end result seems far less weird than you would expect…

…until, perhaps, you enter the master bedroom and see a bed so large and high off the floor one would have to be a track star to jump in. Even here, there’s a concept, a sly story, behind the disorienting humor:

“Some of the proportions in this room were for me to feel petite,” says Jean, who is very tall. “I like being able to sit on the bed and dangle my legs…A lot of my work toys with real/not real, asking a viewer to take a second look to actually figure out what they’re looking at.” This is especially the case in her book works and paintings of Persian carpets. 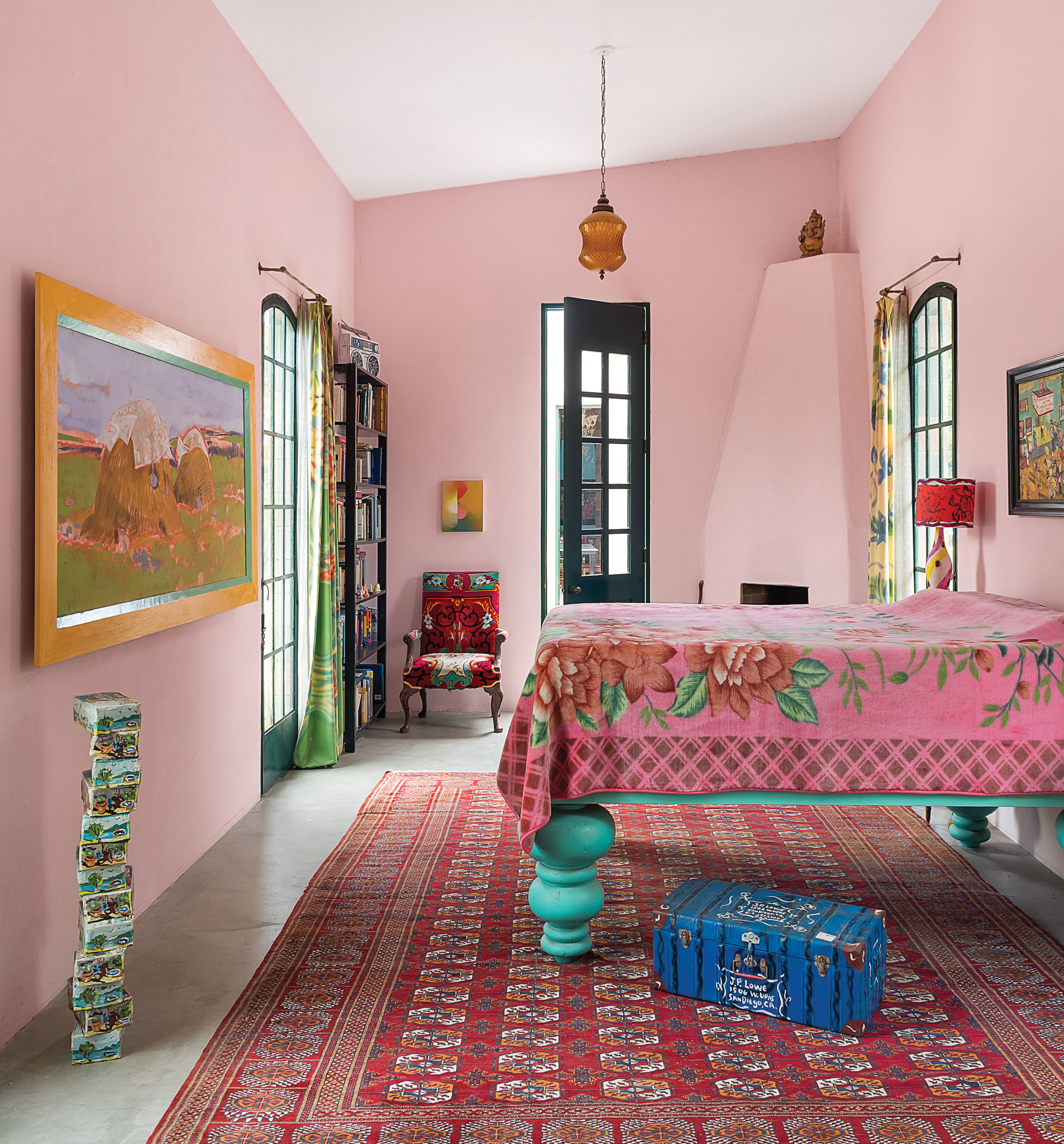 The bed is as high off the floor as it looks. A step on the blue chest is the only way to climb in. On the left wall: “Haystacks Aran Isles” by Patricia Patterson. “Stack of Kleenex Boxes” by Jean. Wick Alexanders “Syndroma de China” is partly visible above the bed.

The master bathroom is another example of design inspired by the unexpected. During his talks with Kim and Jean, Ted once placed the cap of a Sharpie marker on an end of the floor plan to indicate where a bathroom might go.

“We liked it [the location on the plan],” Jean says. “It didn’t interfere with the symmetry. And then we went ‘Oh, and that cap’s shape looks pretty good too.’”

“When we went for a permit the inspector wouldn’t sign it off as anything but an outhouse,” Kim says, so they added a quarter-moon design to the silo-looking structure. 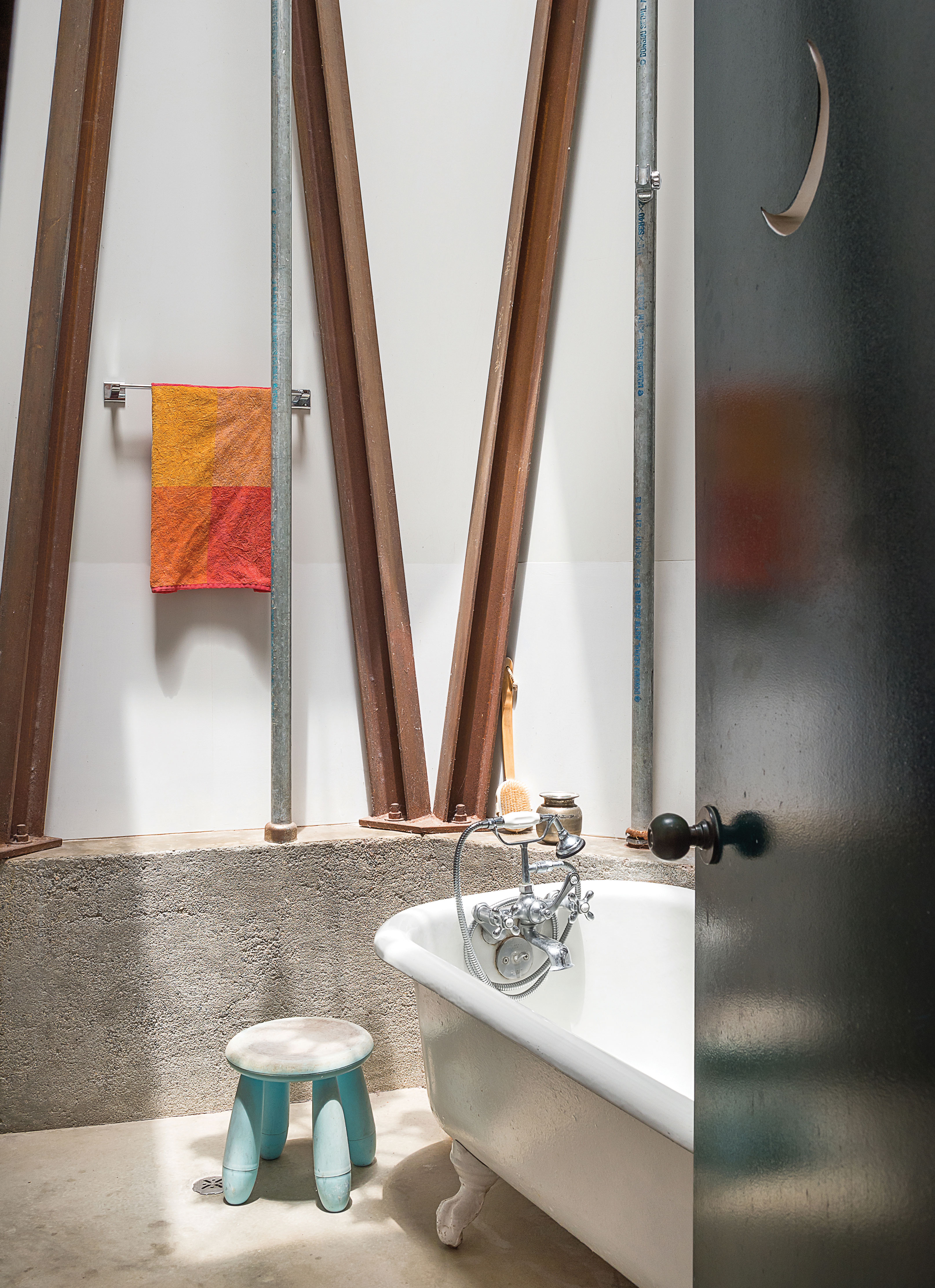 The living room, as you might expect, is the couple’s piece d’resistance. Everything sprang from the hands of the artists, and once again, everything invites a “second look.” The entire room is an art installation that’s comfortable and functional. 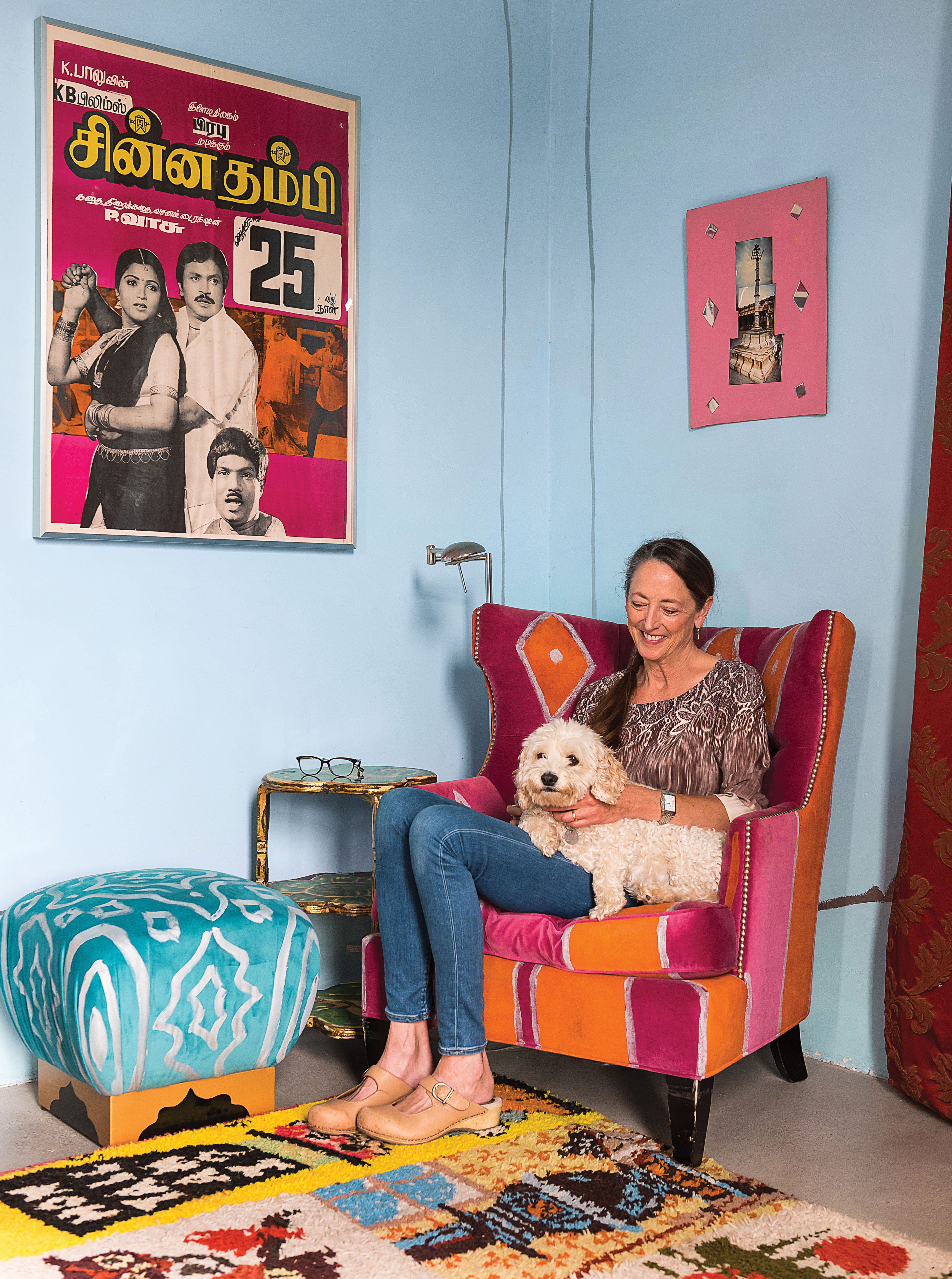 Jeans satiric, sometimes savage, cultural commentary in her art seems far away in a rural home life that celebrates quiet pleasures, a peaceful garden and the couple’s rescued best friend, Ceci. “Temple Mast With Child” in pink frame is by Kim. “Southern India” movie poster is one of the few artworks in the house not by the couple.

For Kim, it’s not the first time. His first exhibition at Museum of Contemporary Art San Diego’s La Jolla location turned a space into a salon. Three walls carried artwork, and he placed his custom-painted furniture in the middle. Museum guards reported that there was a “shoving match between two patrons in the museum over whether one should sit on the art or not.” 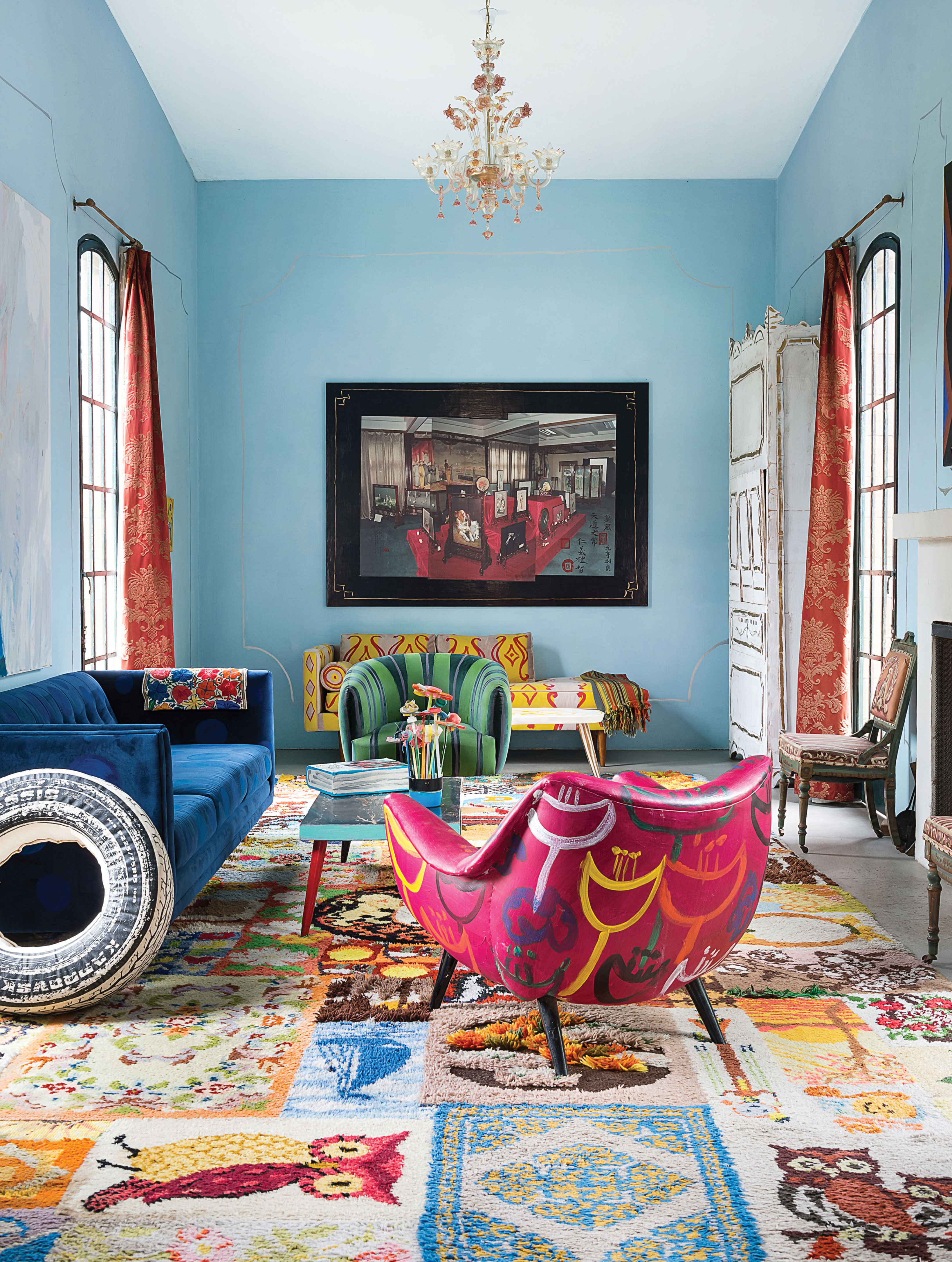 The living room’s huge and colorful hooked rug was purchased section by section in thrift stores, then sewn together to fit the room. “You could find jillions of these things,” Kim laments, “but someone recently told me you cant find them anymore.”

During workdays, each artist can retreat to their own studio: Kim’s is linear like the house and light-filled, while Jean’s is a vast, utilitarian metal shed. Gardens stitch the property together like a quilt and include a vegetable plot, fish ponds, orchards, a resident black-racer snake and plenty of gophers that have dodged the snake for now. Big sycamores in the front and back thrive because roots can drink from a brackish streamside water table only 5 to 8 feet beneath the surface. 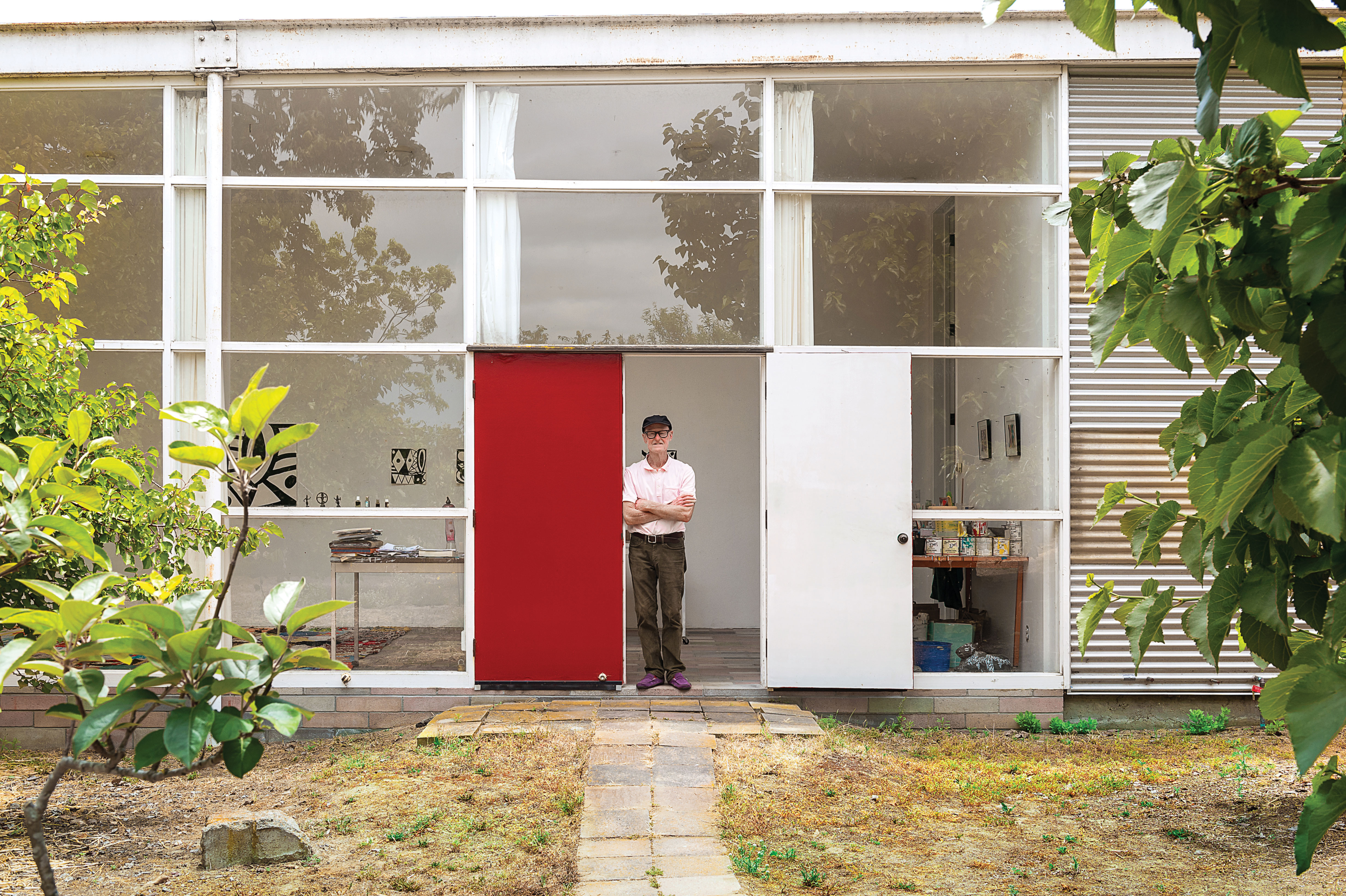 Kim’s studio, with a double-door entry, faces east for morning light. Corrugated metal siding on the right side of the building covers a large storage section adjacent to his workspace.

The couple’s only conventional—but still original and custom-made—piece of furniture can be found near the stream’s willow thicket. A huge picnic table made of salvaged wine-tank redwood invites long afternoons spent with friends. “It’s so beautiful here,” Kim says, “and when it gets really still, really hot, big cumulous clouds build over the desert and mountains. I wouldn’t want to be anywhere else.” 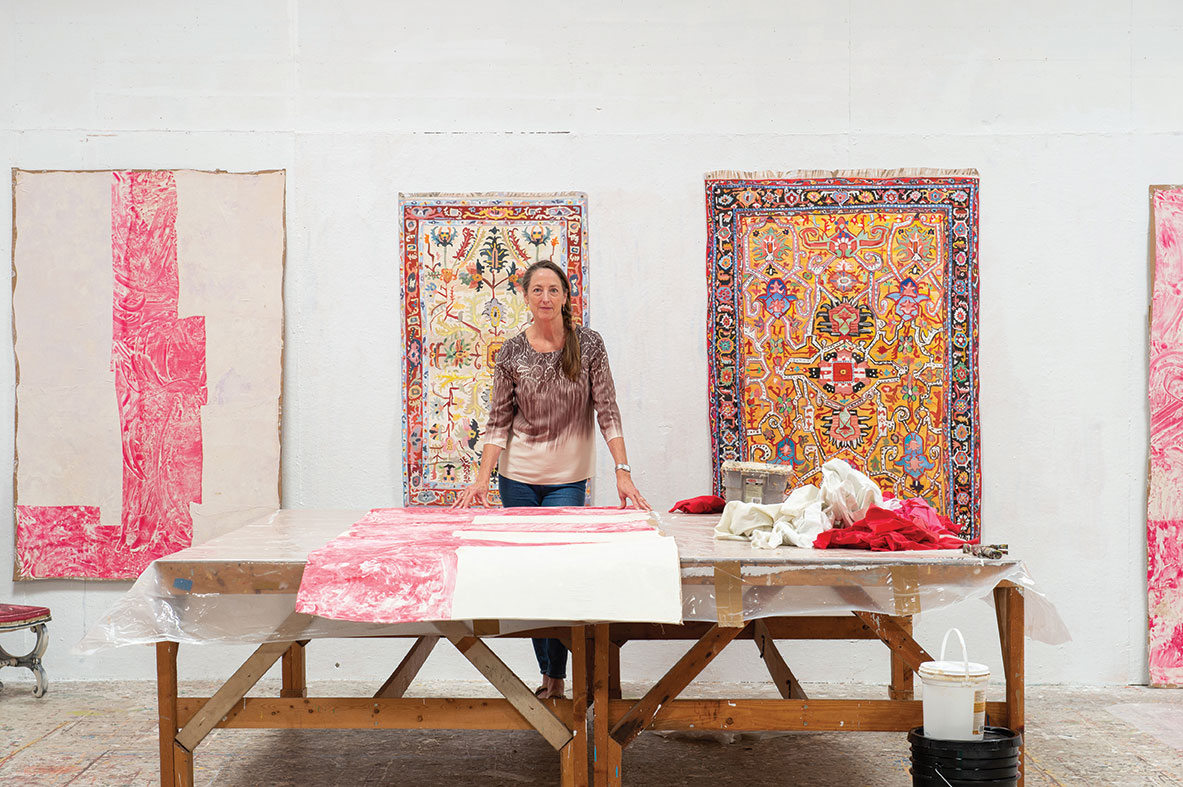 5 Ways to Decorate With Style—and a Sense of Humor

Get some the expert (and fun) decor tips from whimsical, storied artists Jean Lowe and Kim MacConnel.