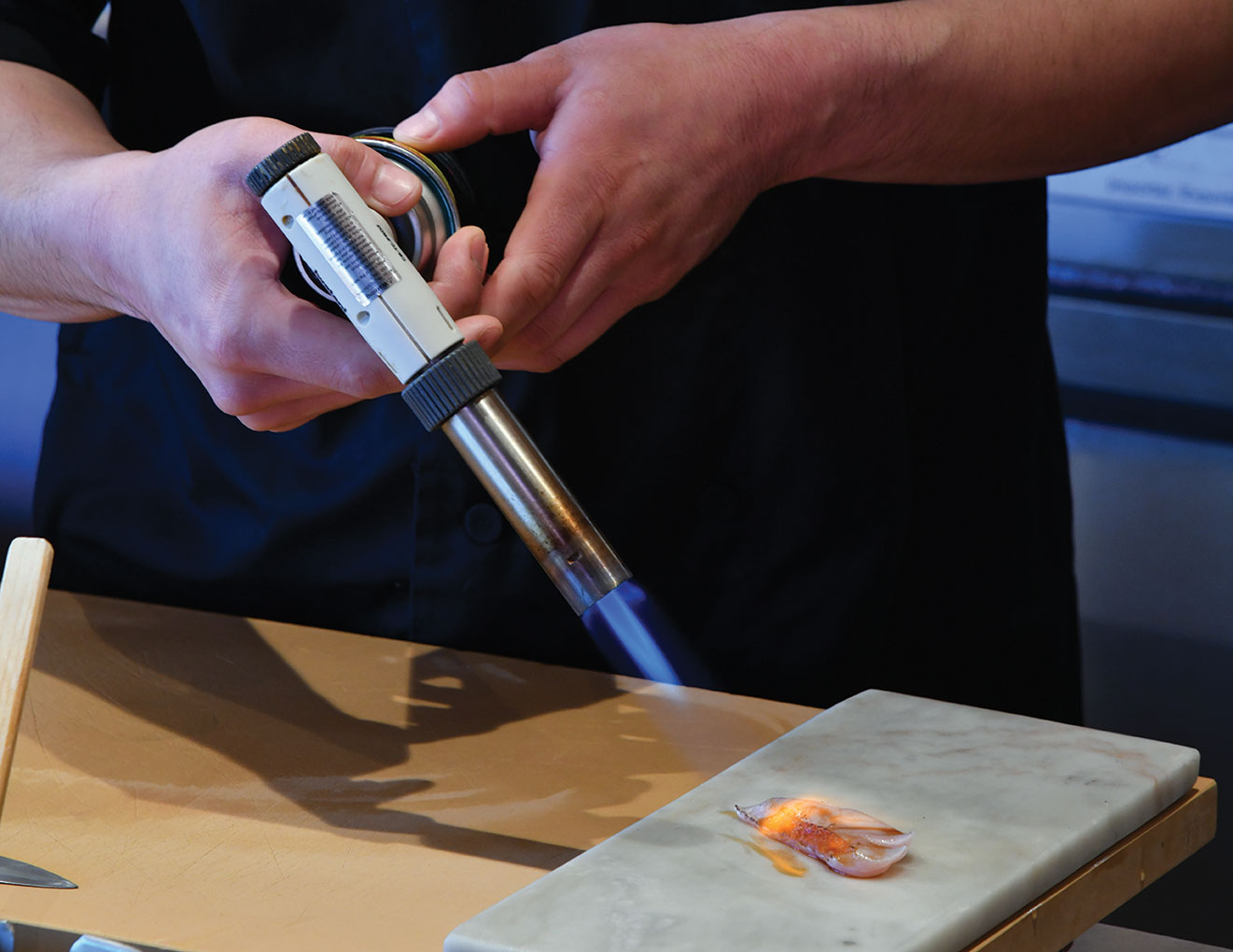 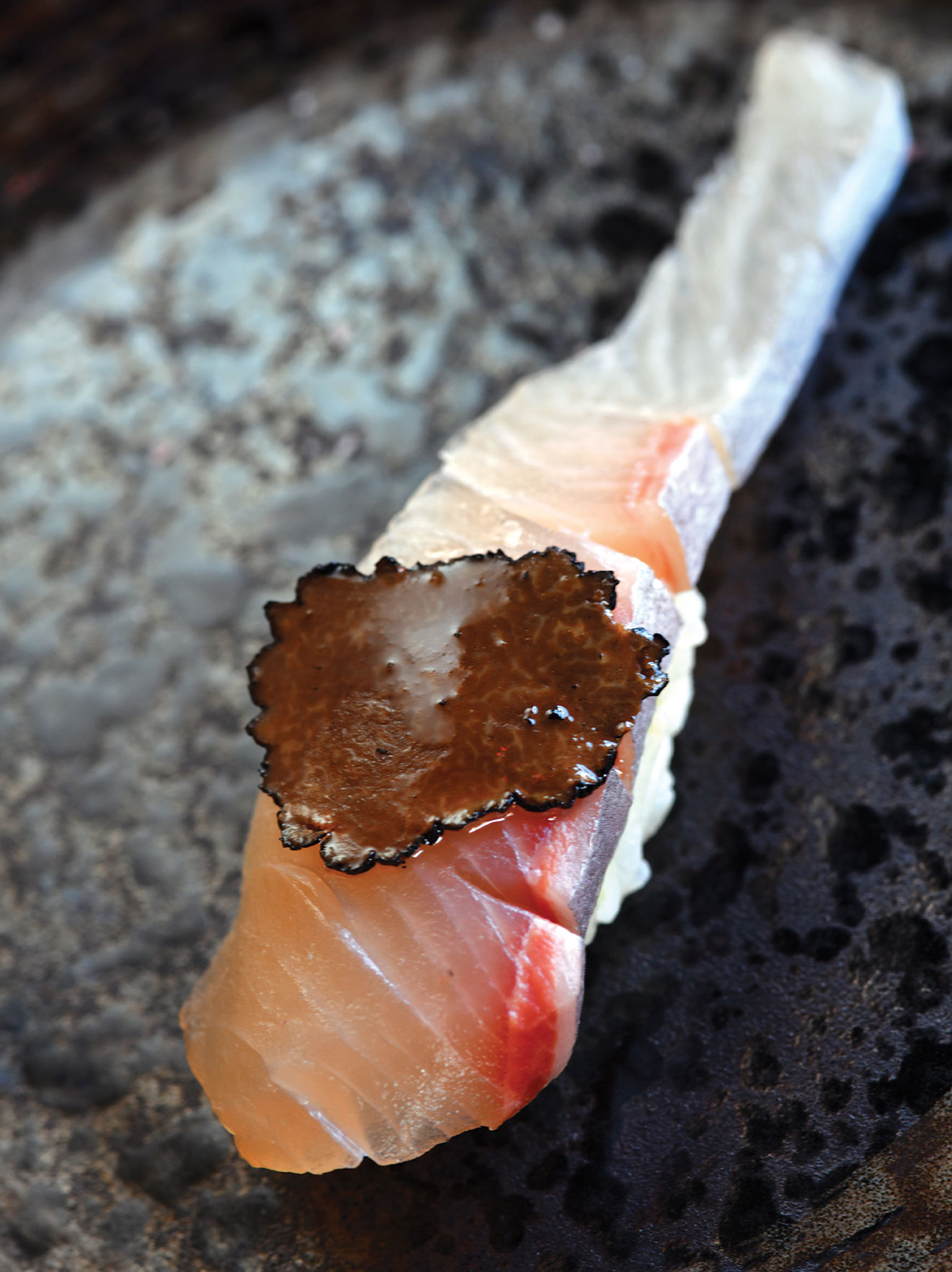 At about 5:20 p.m. one recent Wednesday, chef Steven Pfan sliced five precise portions of golden-eye snapper from a pristine filet, arranged them on warm sushi rice with tads of wasabi and lemon zest, dusted each with a whisper of pink Himalayan salt, and, bringing to mind Julia Child building brown sugar crusts on pots of crème brûlée, blow-torched each to crisp the salt. He then presented the mouthfuls to the five top-dinero patrons who booked the evening’s first 90-minute shift at the new Hidden Fish omakase restaurant on Convoy Street.

The snapper was the fourth in the epic 18-course “Premium” sushi dinner, which costs $90 per person (plus beverages, tax and tip) and is intended to artistically engage the eye and palate, if not necessarily to fill you up.

Omakase could be expressed as “chef’s choice,” and a second chef stood behind the counter to create 12 courses for the eight guests who reserved the night’s first 50-minute, $50 “Omakase Teaser.” The idea behind this restaurant co-owned by executive sushi chef John “Kappa” Hong, is to enchant through the medium of fish, and while the concept of apportioning the restaurant’s 13 seats between groups of five and eight enjoying meals of different price and duration is unusual locally, it works.

Staffers blithely serve drinks—dry sake in Champagne flutes!—and direct new arrivals to the lounge until their seats are ready.

Book in advance and look forward to items like seared albacore with garlic paste and radish ponzu; amberjack with sea salt and a truffle; and horse-mackerel with freshly grated ginger, scallions and ponzu.

The meal’s pace is relaxed (90 minutes is plenty of time) and if you want, you can stay on after to stuff yourself with classy à la carte sushi.

One day, balsamic vinegar was unknown in San Diego. The next, torrents of it gushed down the city’s restaurant rows—making some wonder how a seemingly precious resource became so available overnight. Scroll up to today, when the previously barely known Himalayan pink salt (mentioned earlier) suddenly is making welcome appearances at a variety of venues. At the head-spinningly deluxe Del Frisco’s Double Eagle Steakhouse downtown (which we covered in depth in last month’s column), a sprinkle of the stuff is the distinguishing flavor in the daily “simply prepared seafood” entrees, which are excellent. And in Gaslamp, a venerable eatery has built a whole wall of Himalayan pink to hide its new meat-aging room.

Chef Alex Carballo has traveled the county over the years (Indigo Grill, Stone World Brewery), so no surprise he’s finally set up on his own with Clara, a second-story restaurant in downtown Carlsbad’s well-established Carlsbad Village Faire. The place looks tiny from the door, but slide past the bar, take a left and find a comfortable, intimate, pleasantly decorated room. The menu is nothing if not inventive; the appetizer called Thai CBJ piles Thai strawberry jam, cashew butter, cucumbers and more on date-nut bread as a kind of out-of-control tea sandwich. Much more orderly, carefully braised lamb osso bucco is plated with mashed sweet potatoes, green beans and full-bodied jus. Dessert may be something Frenchified, like a baked galette (crust) with Sherry-soaked pears and a halo of whipped ricotta. 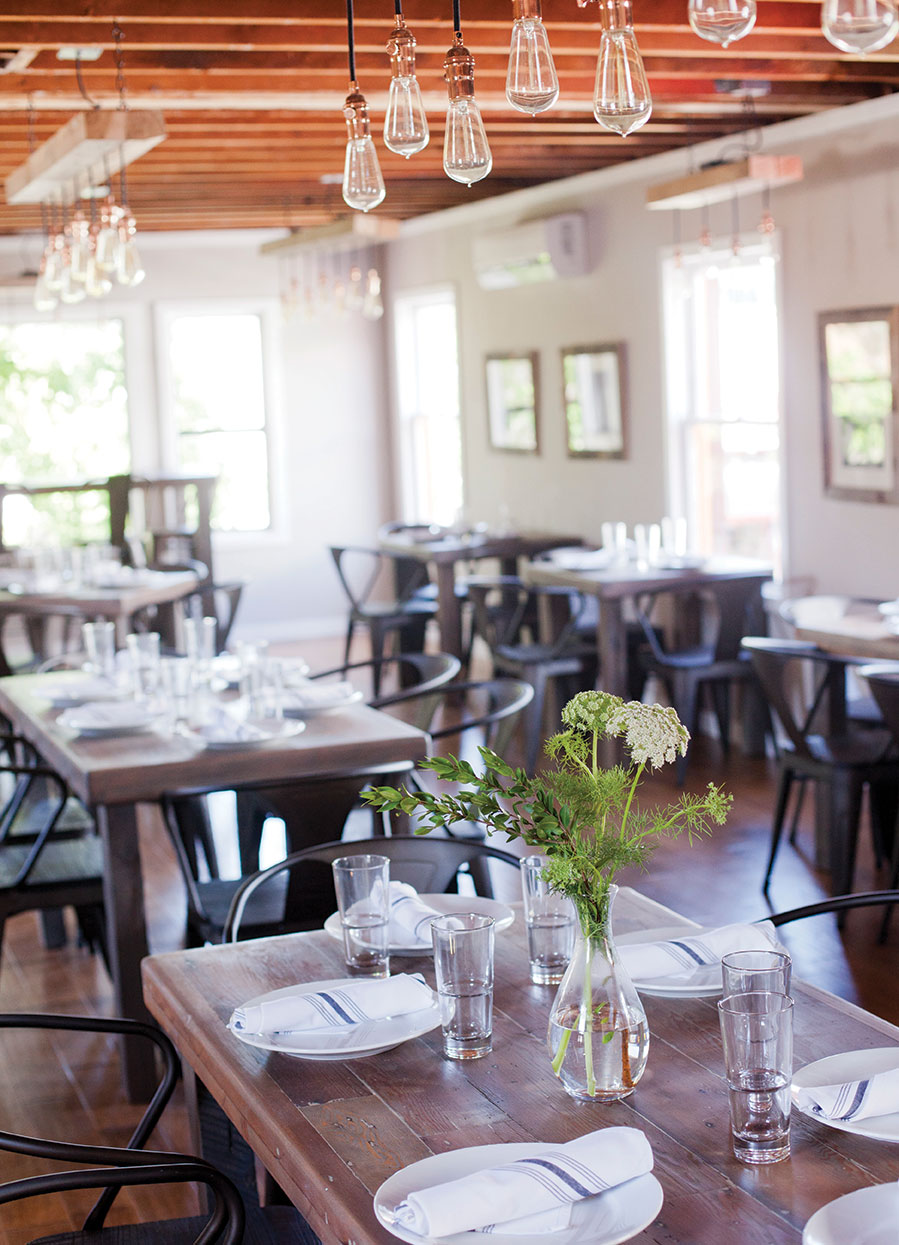 Sometimes restaurants get everything just right. Landini’s Pizzeria is not a new act on India Street, but it has punched up its performance by transforming a little-used upper floor (waaay up a long staircase) into the pleasant Ristorante Illando.

With good looks, a cheerful staff, a full Italian menu and the quite welcome, $15 Pranzo Pronto express lunch, it’s a cozy destination, especially between noon and 4 p.m. every day. “Build your own lunchbox!” enthuses the express menu about the meals, which open with several choices of bruschetta and salad, continue with four pasta options and cannoli or cheesecake for desert. So, you might order mixed greens with feta cheese and Kalamata olives, the deliciously creamy penne Chiantigiani with chopped sausage in vodka sauce, and a small but tasty cannoli. Presented on a square, three-compartmented plate, it’s something like an Italian bento box. 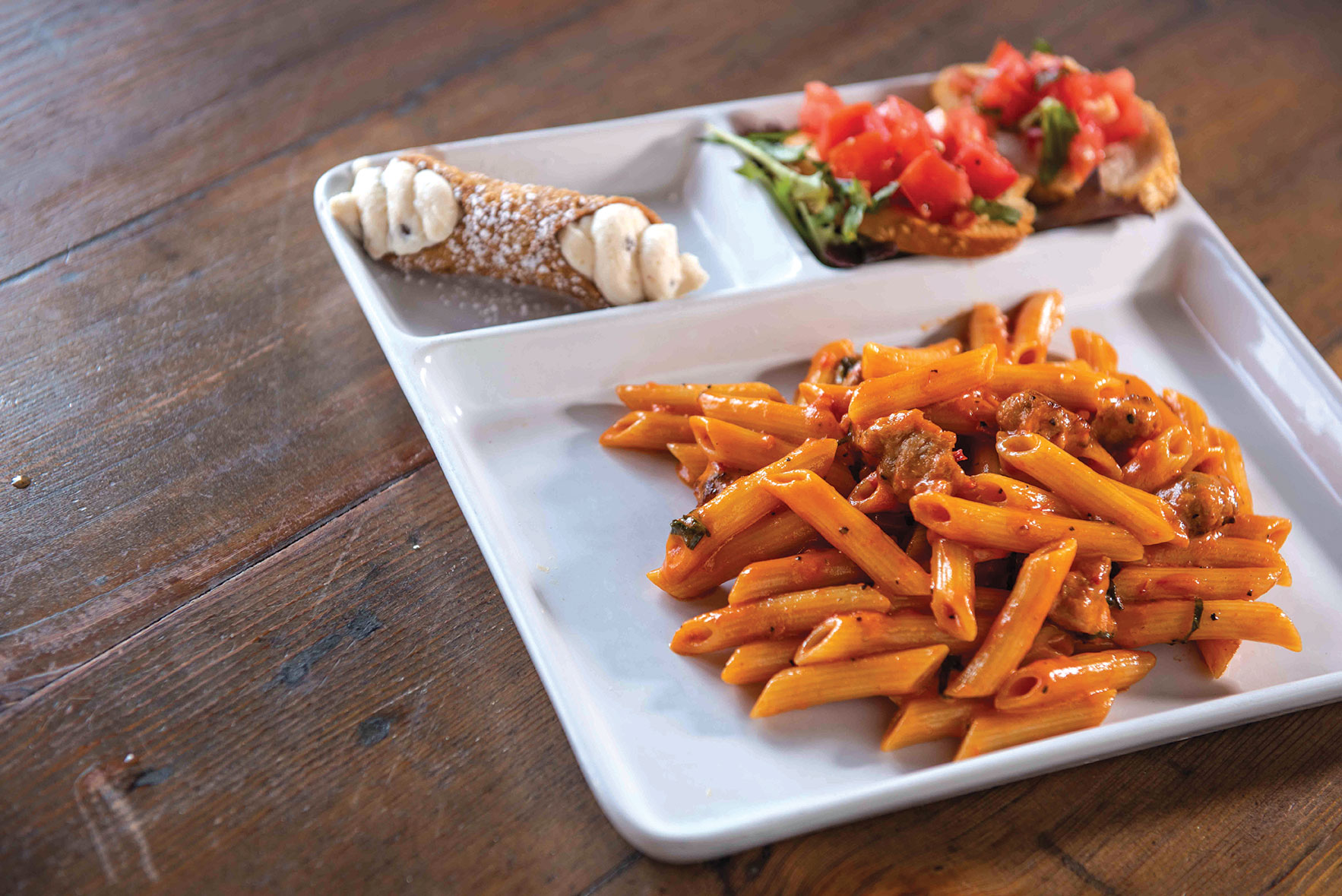 The Pranzo Pronto at Ristorante Illando, with bruschetta, penne Chiantigiani and a cannoli.

Bringing another restaurant with pasta offerings to Little Italy seems like importing pizzas to Naples, yet the new Farmer’s Table (the third in this young local chain) has settled comfortably in the neighborhood. Its considerable square footage in a residential building on beautiful Piazza della Famiglia has room for the same irrepressible, nearly endless menu as in La Mesa (see more about this restaurant in Around Town) and Bay Shores. Whether a cautious roast chicken-fancier or a daring game player (venison, etc.), this menu’s got you covered.