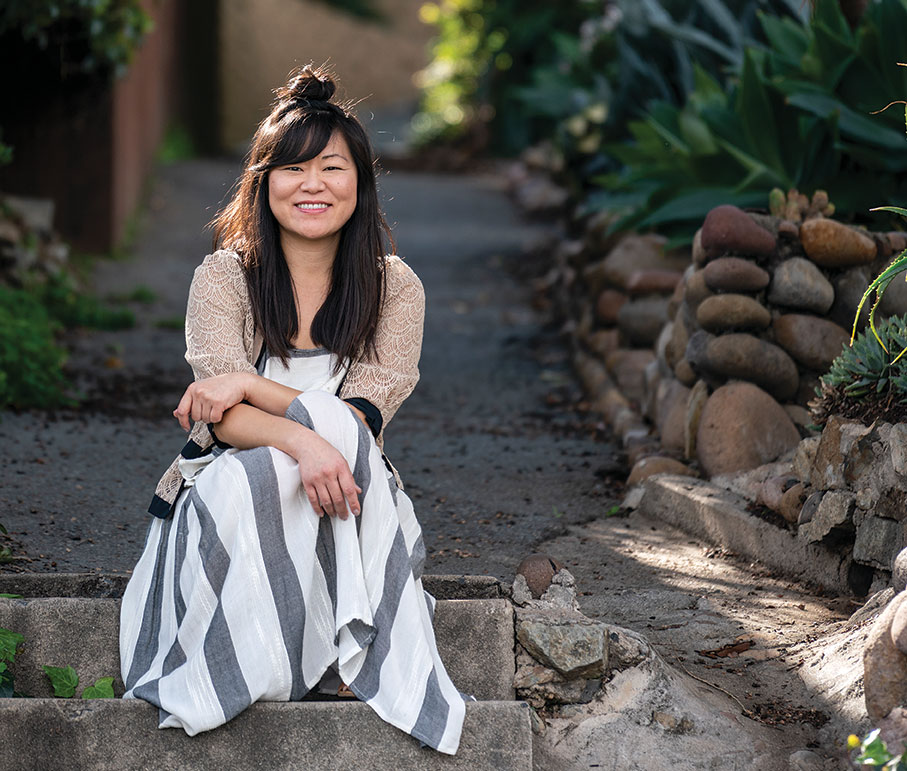 Jina Javier, of North Park’s Leo nail salon, and Liv3, the San Marcos boutique, shows us around her neighborhood of La Mesa.

If community connection wasn’t on the top of Jina Javier’s priority list, Liv3, the San Marcos lifestyle shop selling accessories, gifts and women’s clothing that she co-owns with her two younger sisters; and Leo, her North Park nail and massage salon, would be just that: a shop and a salon. Instead, they also create environments that are invitations to cozy camaraderie. Her penchant for reaching out to the community—plus the fact that she lives in La Mesa—made her the perfect person to take Gary and me around to show off her neck of the hood. Her tour menu was a tad food heavy, but Jina says La Mesa has more bars and restaurants than boutiques and shops. Her where-to-go choices made perfect sense, though. Since community connection makes her happy, why wouldn’t her favorite places be where you convene with friends and family to enjoy conversation and food?

What better place to meet at 10 a.m. than a coffeehouse? Jina says she sometimes likes to come here alone, “to a spot where I can take a moment to think more clearly.” The window announces Public Square is “Known For the Scone” and that they’ve got “Breakfast Served All Day, Hooray!” but Jina’s up for “Great Coffee” and orders a latte with handcrafted black-sesame syrup. She says black sesame appears in all types of Asian food and makes her feel at home. Amazing barista latte art—a patterned leaf design—topped this smoky-flavored waker-upper. The coffee zaps Jina’s taste buds—and her—into gear but it’s Public Square’s business credo, “We believe that people need a more genuine type of contact…” that gives her a true buzz. 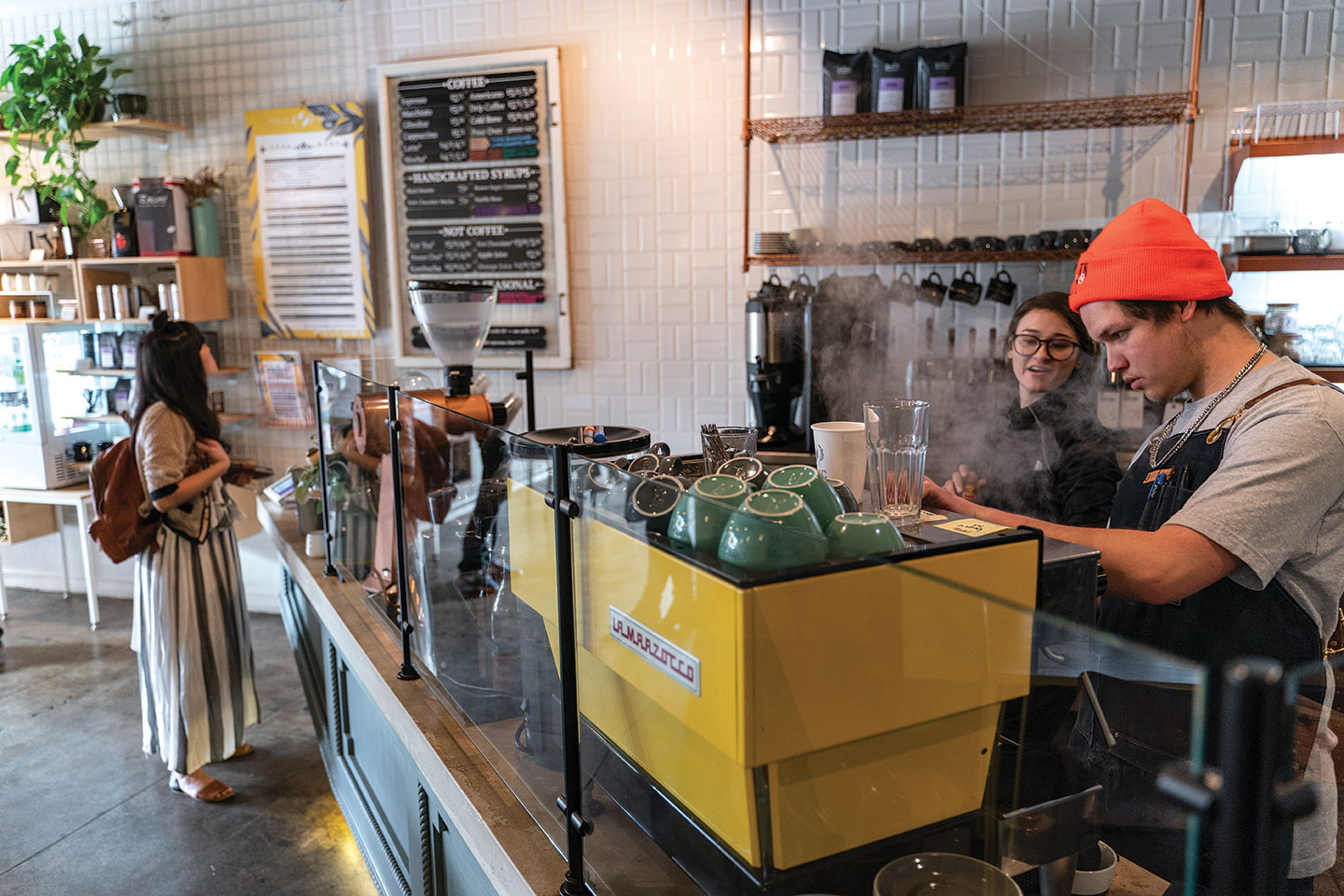 “Public Square has fun little touches that are so attentive and friendly, like the pocket cards they give you with your coffee that have a little message in them,” she says. Hers opens up to an Abraham Joshua Heschel quote: “…get up in the morning and look at the world in a way that takes nothing for granted. Everything is phenomenal; everything is incredible…” 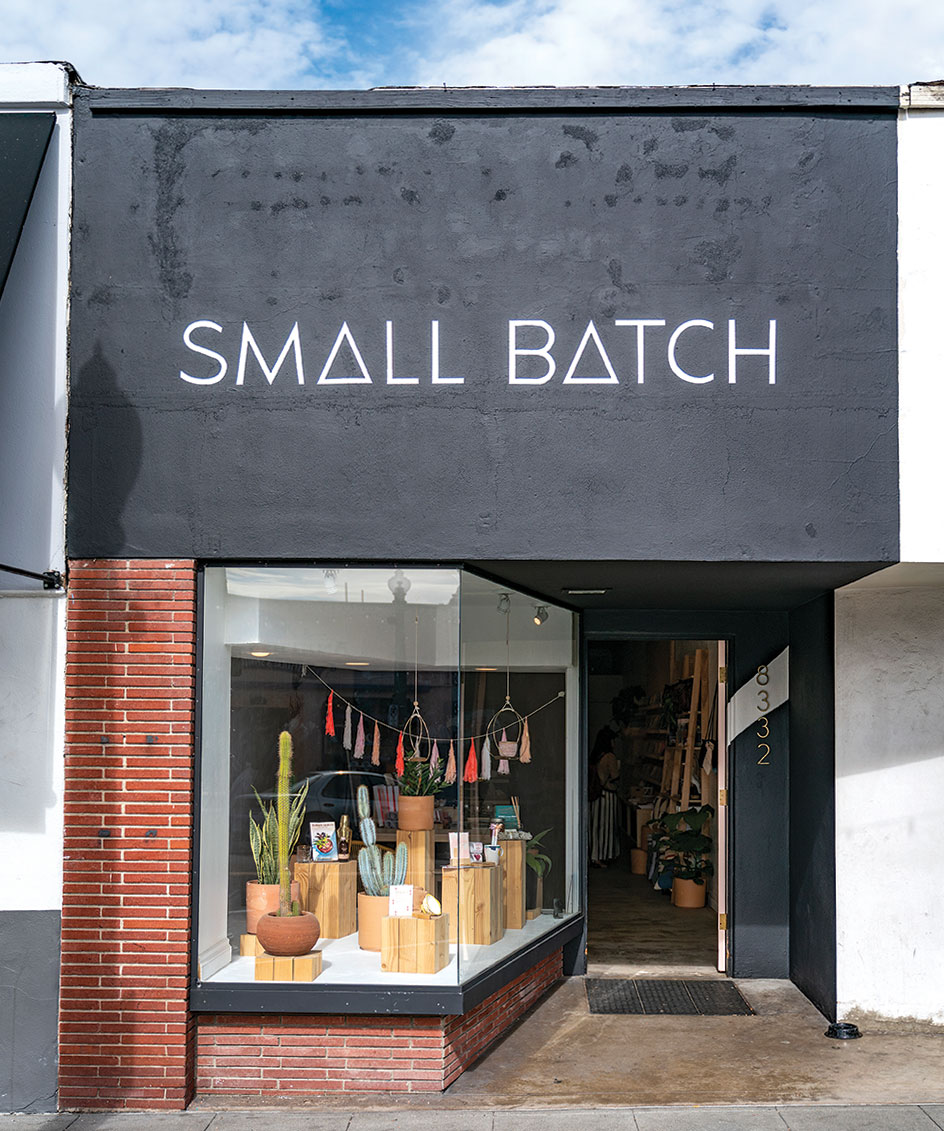 The pink door grabs my attention but when I open it, I can’t place the pleasant aroma that hits me. The sales associate, Holly Rone, says it might be the all-natural soy magnolia and sea salt or salt water and agave candle diffusers from 1502 Candle Co. in Ocean Beach. It’s important to owners Brittany Peña and Lacy Bird to support local makers in this diverse boutique.

They sell home accessories; jewelry; blankets; children’s books, toys and clothing; gifts and stationery. Jina hits the card display first, giggling over the hand-drawn Good Juju Ink cards that just came in. “I love how clean, calm and simple this shop is—how fresh—and how everything has purpose,” she says. “Just look what you can do in a small space.” 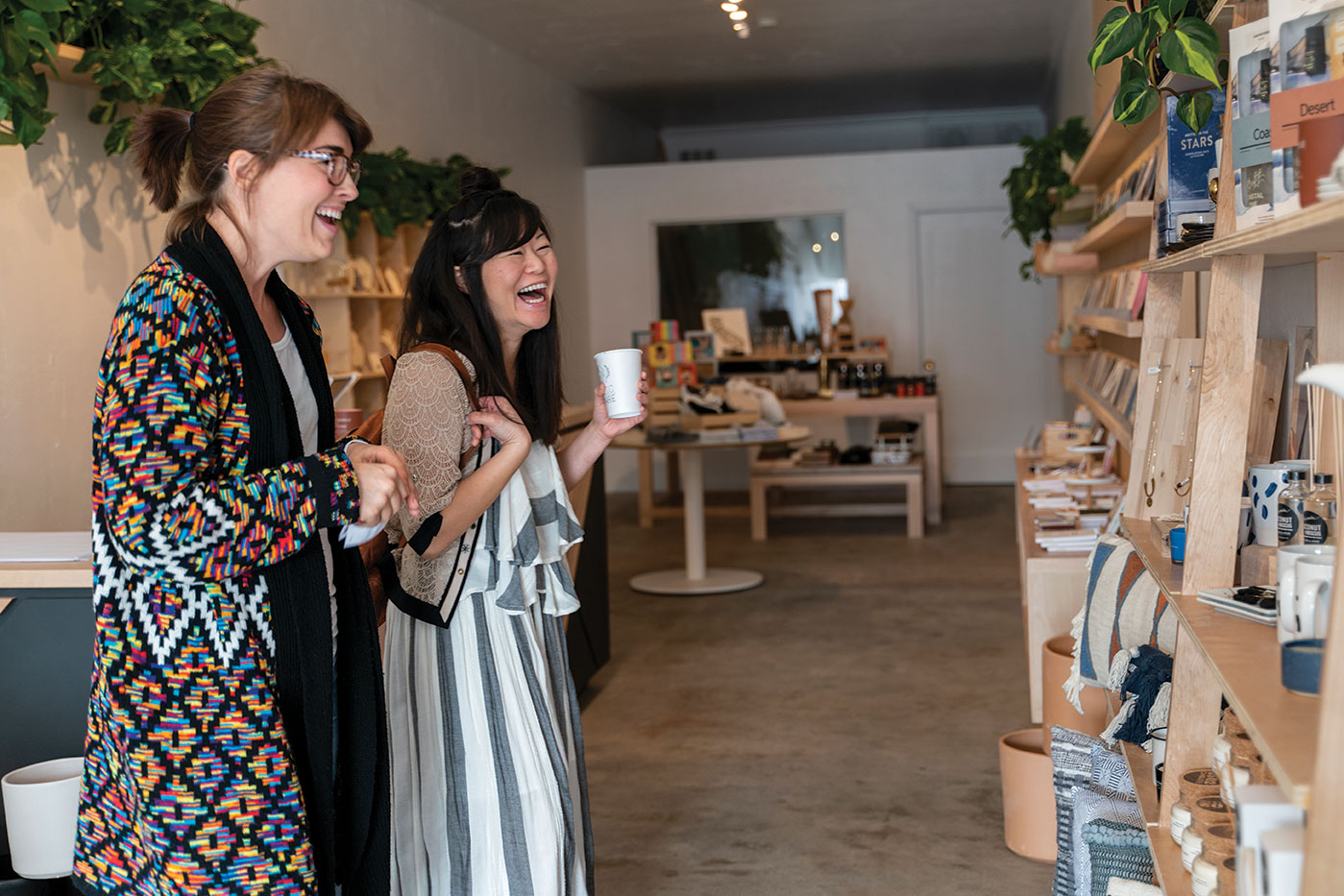 This breakfast-lunch patio spot on the site of a former 1920s gas station opened in October 2017, and before you could say, “Octoberfest,” the place turned into the hot neighborhood hangout.

Jina’s sister, Jane, lives just behind the café, so the duo often join up for breakfast with their kids—Jane has a 2-year-old and a 6-year-old; Jina, an 8-year-old and a 10-year-old. “This is a fun, outdoor space, where you don’t have to worry if your kids are a bit rambunctious,” Jina says. The kids usually get bacon and eggs (the eggs are cage-free, locally produced at Hi Desert Egg in Lucerne Valley) and her health-conscious sister likes avocado toast. “I get the bakery’s pastry and then eat off of everyone else’s plate,” Jina jokes. Today, though, she decides to be healthy and opts for the Milanese Avocado Toast on multigrain bread with arugula, Buratta cheese, tomatoes and balsamic reduction. The pleasant patio, where we sit, is a parking lot conversion from when the place was an art gallery, but owner Gy Kirk was proud that they retained an arched side window from the original flapper-era building when they remodeled. Patriarch and former mayor George Sheldon, who built the city’s first full-service gas station, would be proud. 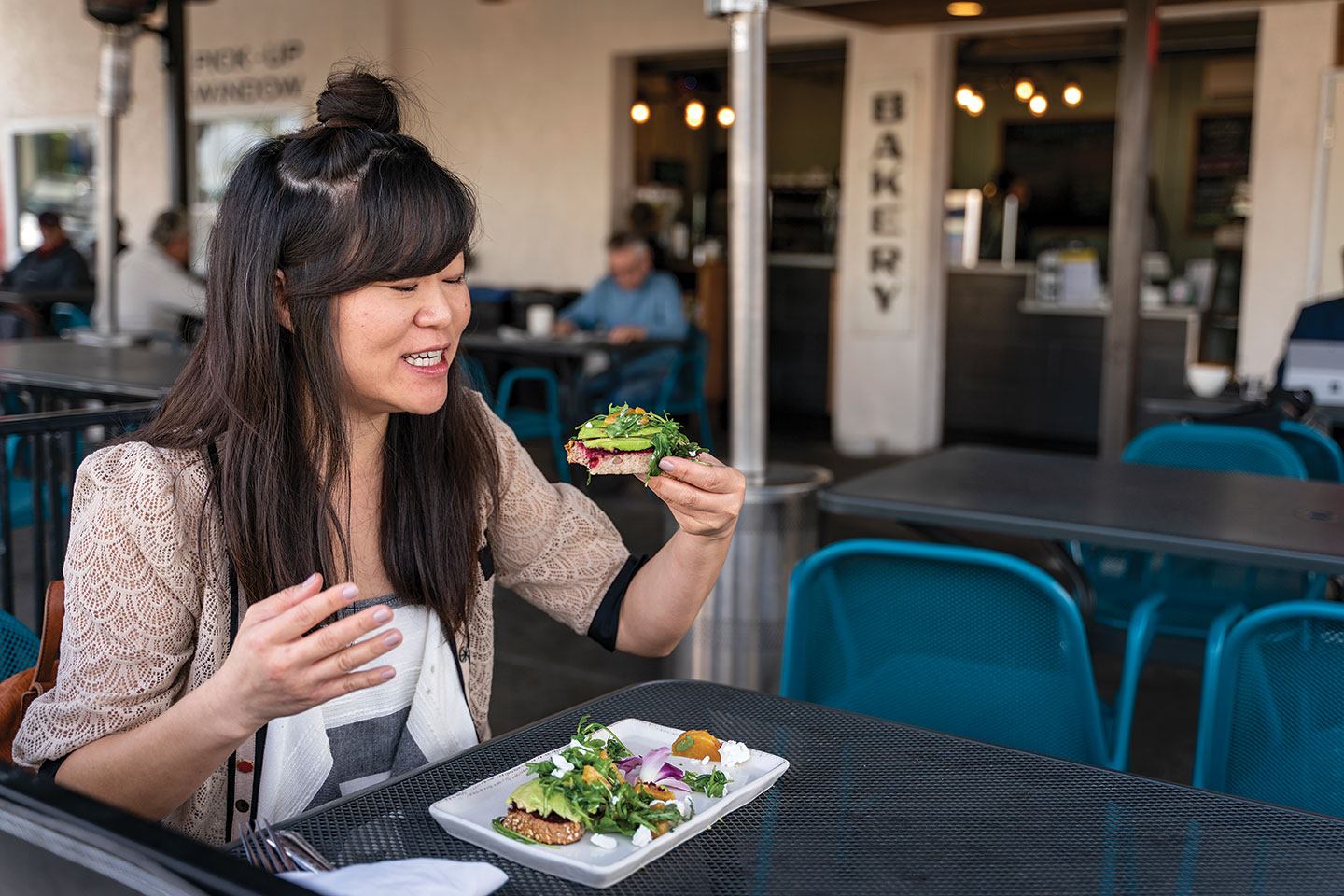 It’s nearing lunch time, so we head over to La Mesa’s latest pizza place, which opened last November. “Leo, my 8-year-old, loves pizza and he was counting the days for it to open,” Jina says. 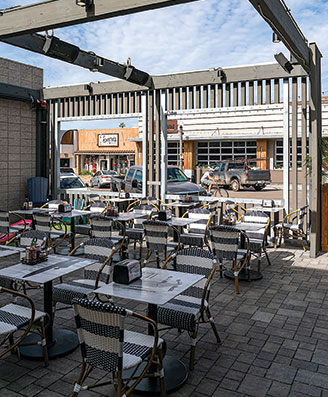 Another great outdoor space for kids, this surf-themed spot also has plenty of seating inside the 6,000-square-foot dining room. As expected from the diner’s name, there’s plenty of surfing memorabilia. That’s to honor co-founder Hilary Rossi’s surfer dad. Hilary hails from the Philly area, so it’s also not a shock that the hand-tossed pizza delivers East Coast-style pie—think crispy crust and whole-milk mozzarella (you can thank Hilary’s mom for the sauce; it’s her recipe)—or that hot cheesesteak sandwiches with authentic Amoroso rolls (a Philadelphia bakery) are on the menu. And, since the latest parlor landed in La Mesa to be part of this tight-knit community, it also makes sense that its Himmelberg Bar (where drinks have names like “Shaka” and “The Wipe Out”) was dubbed after much-loved philanthropist and community member, the late Joey Himmelberg.

But there is a surprise on the premises: a pastry kitchen. In fact, first on view is the display of Foundation Bakery’s desserts. Since Jina didn’t indulge in a pastry at Sheldon’s, she deserves a little dessert for her sweet tooth before lunch. She nabs a banana Oreo pudding. Hey, it’s got banana in it, so it’s got to be healthy. 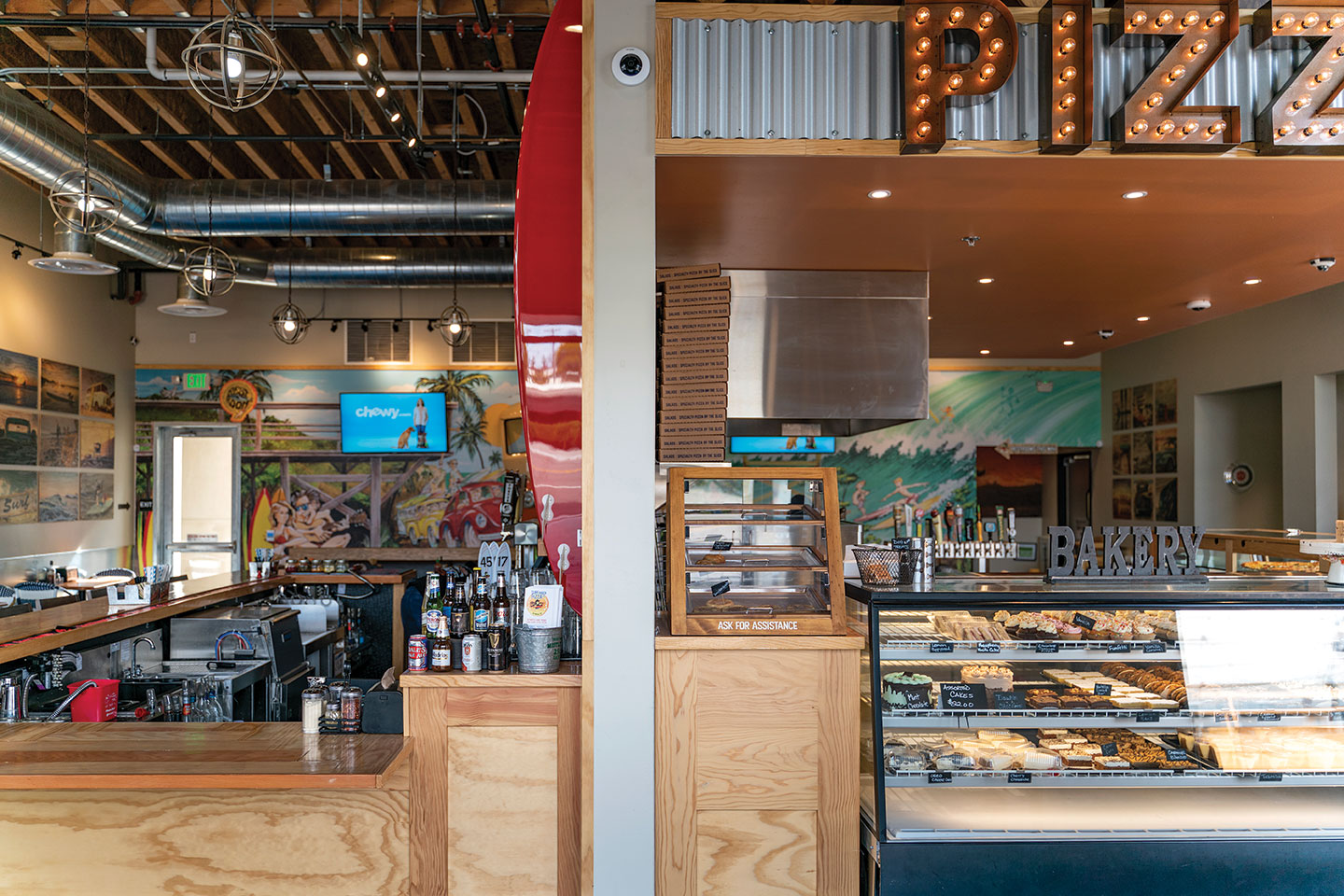 Now it really is time for lunch. We could walk but we opt to drive down La Mesa Boulevard and across busy Spring Street to the rustic ambience of this “farm-to-fork neighborhood eatery.” 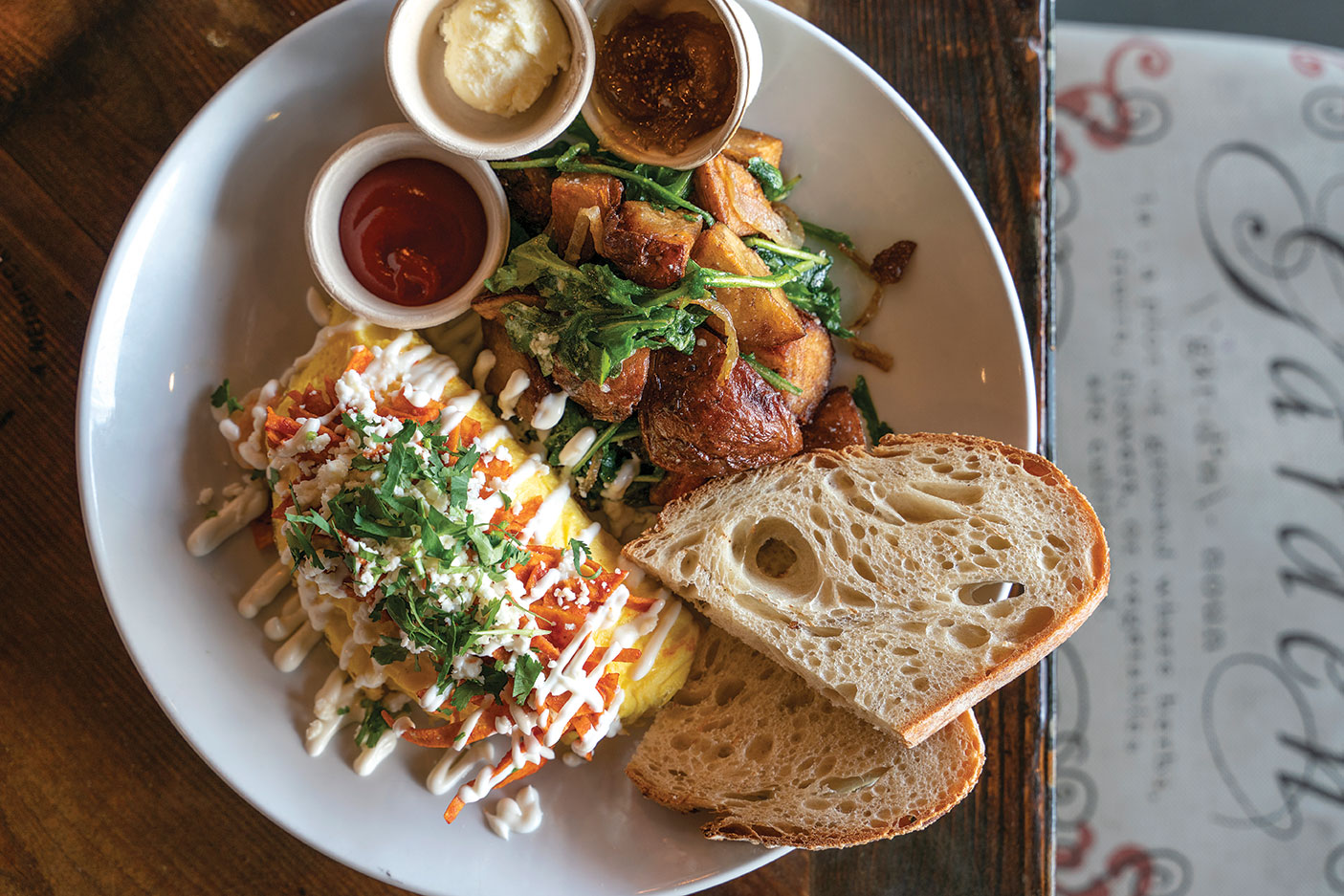 “There are so many modern places, it’s nice to have a spot that’s different,” Jina says. “And all the decor items lend themselves to a great game of I Spy with the kids.” I see what she means. A McCormick tractor greets us at the entrance. When there’s a wait (there wasn’t) diners can sit on a bench designed with a fragment from a classic Ford pickup truck. We sat on metal stools at a wood table with a base made from the body of a Massey Ferguson tractor. Flowers in galvanized milk-churn vases or dried wheat stalks in old milk jugs dress the tables. Some chair upholstery features chickens, and hats on display hang from chicken wire. When Jina does have the kids with her, they get a kick out of ordering the pizza that’s shaped like a fish. She and her husband, Jeff, usually have the ratatouille risotto made with seasonal vegetables—“unless we come here for breakfast,” she says. “Then we have the crab cake benedict with house-made crab cake.” The idea of breakfast, though, changes her mind. Instead of lunch, she orders a Santa Fe omelet with shrimp, fresh mozzarella and cotija cheese, Oaxaca cream and homemade tortilla strips. (What? Not the banana foster French toast with bananas, brown sugar and rum? It’s got bananas in it.) 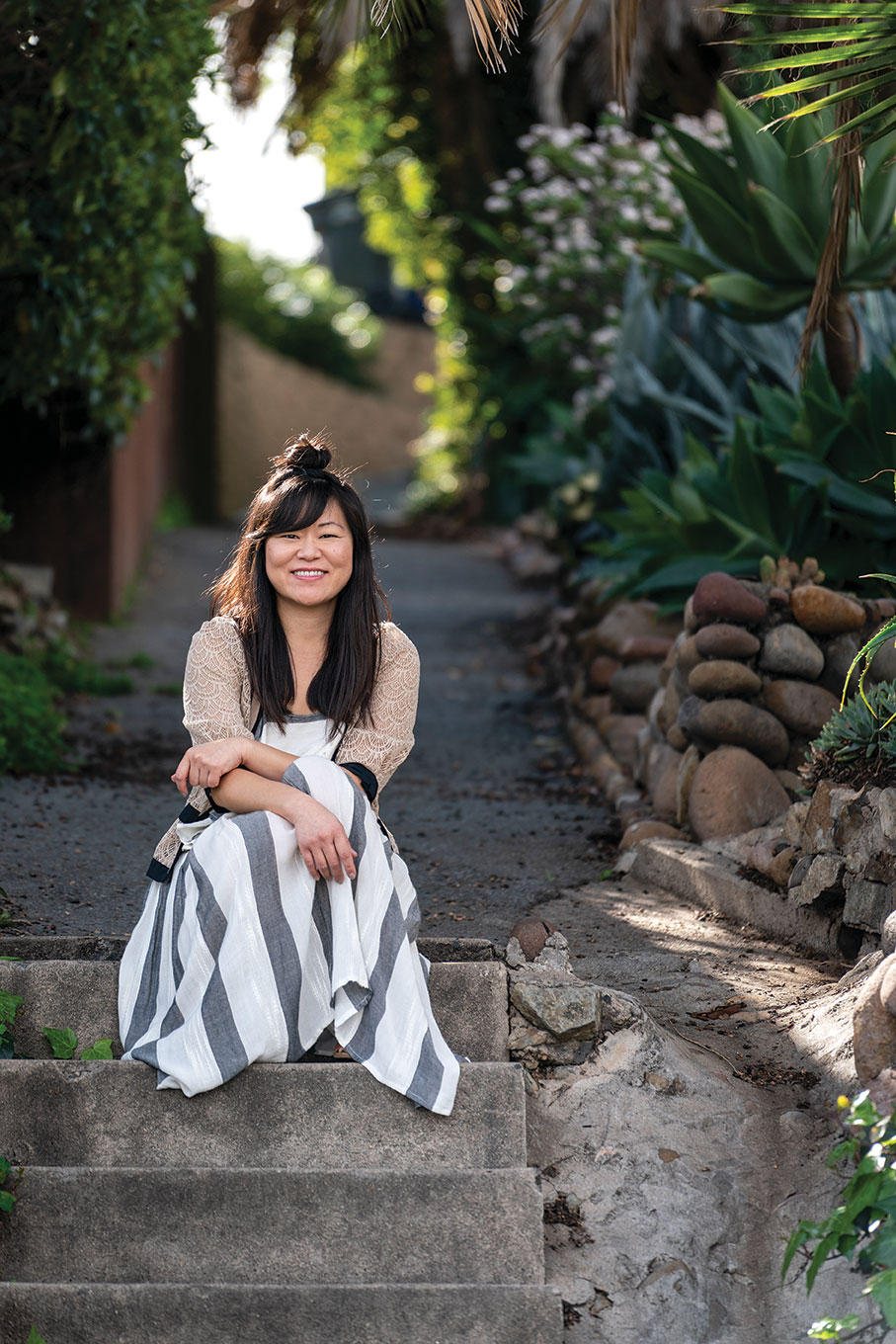 When you eat and eat and eat, you need exercise. Jina takes us to one of her favorite cardio workout places—a series of steps (489 of them in seven segments to be exact—and no, we did not stair-step them all) that date back to more than 100 years ago, with some sections constructed around 1912 and others built around 1927. This public stair trail travels from Fairview Avenue and kind of jig-jogs its way to Mount Nebo, which, if we would have made it that far, would have given us panoramic views of the sea, La Jolla, downtown San Diego and Mount Helix.

We hit the steps at Summit Drive (245 steps down to Pasadena Drive, and no, we did not do all 245 steps, either…) and still got an expansive view to Mount Helix. Plus, we enjoyed the peace of birds chirping, the smell of jasmine and plumeria in bloom and the beauty of jade, succulents and bougainvillea. Residents have homes next to the stairs, so we refrained from singing “The Hills Are Alive” from The Sound of Music. 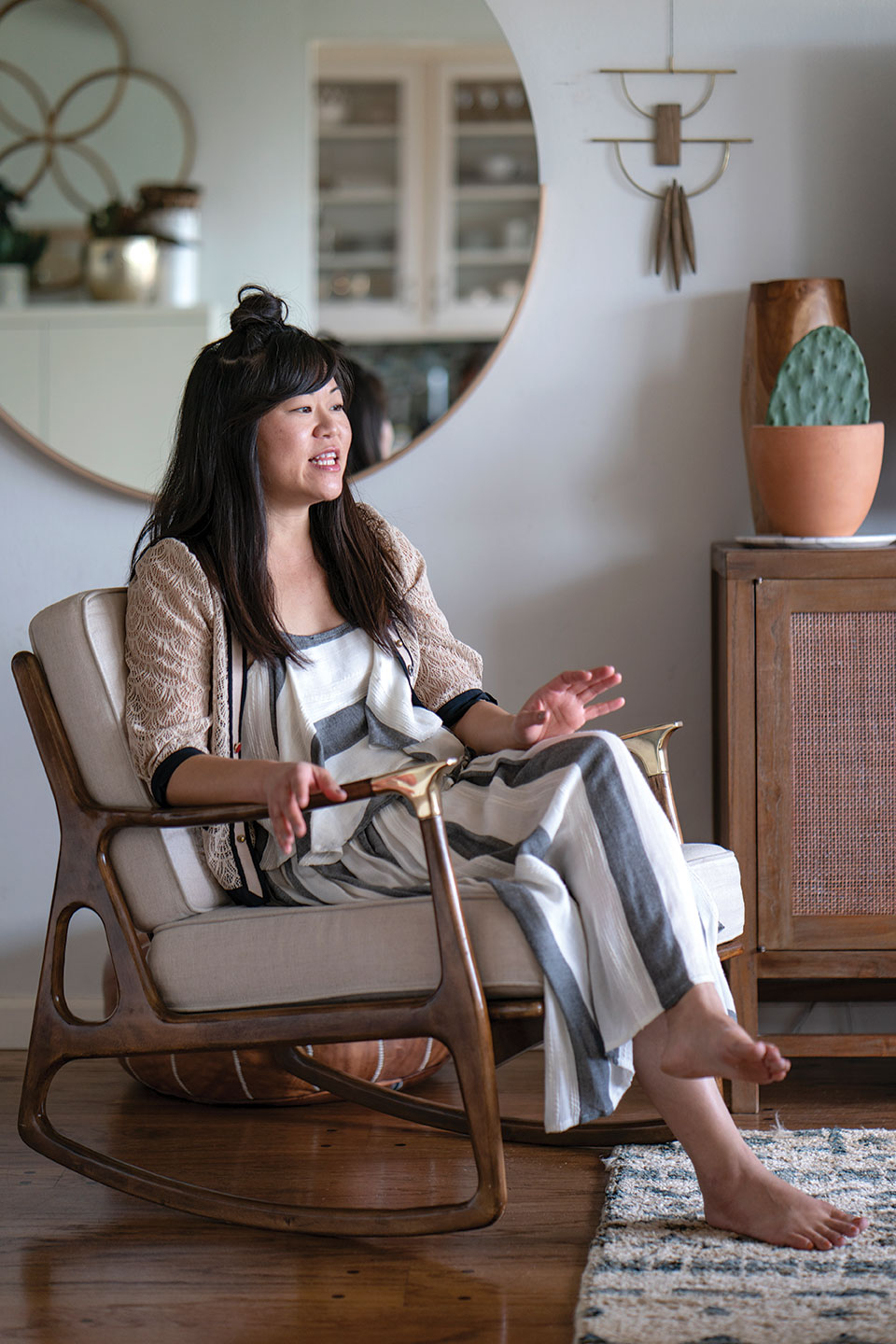 Since Jina’s home is a hop, skip and a jump away from the Secret Stairs, she leads us there next. Inspired by HGTV’s Tiny House Hunters, Jina imagined her family moving from their 3,000-square-foot Scripps Ranch residence to a cute, itty-bitty cottage, like this charming, 1950s, three-bedroom, one-bath house that is less than half the size. “It sounded magical,” she says, “but when we moved to this place two years ago, I felt claustrophobic for a year.” Then, before the Netflix series came out, she discovered Marie Kondo’s The Life-Changing Magic of Tidying Up. “This book changed my life,” Jina says. “I had dumpsters delivered and threw away my house—furniture, dishes, silverware. If I didn’t love it and feel joyful, I got rid of it.” Natural woods, neutral furniture—and an abundance of white—now permeates this calming space. “I chose white, which is terrible when you have kids, but I wanted a sense of peace,” she explains. “Leo [her North Park salon] is more colorful, so I love that this is different.” Arresting white, in combination with neutrals and a large picture window overlooking Mount Nebo, gives the space an airy, sunshiny disposition. “I love being up in the hills,” she says as she takes her sandals off and settles into a midcentury-modern rocker. “It feels like San Francisco. This is a great, walkable neighborhood. It brings me joy.”