Looking Back: the passing of the fire horse

Some of the San Diego Fire Department's horses found homes and other were honorably retire to city-owned land. 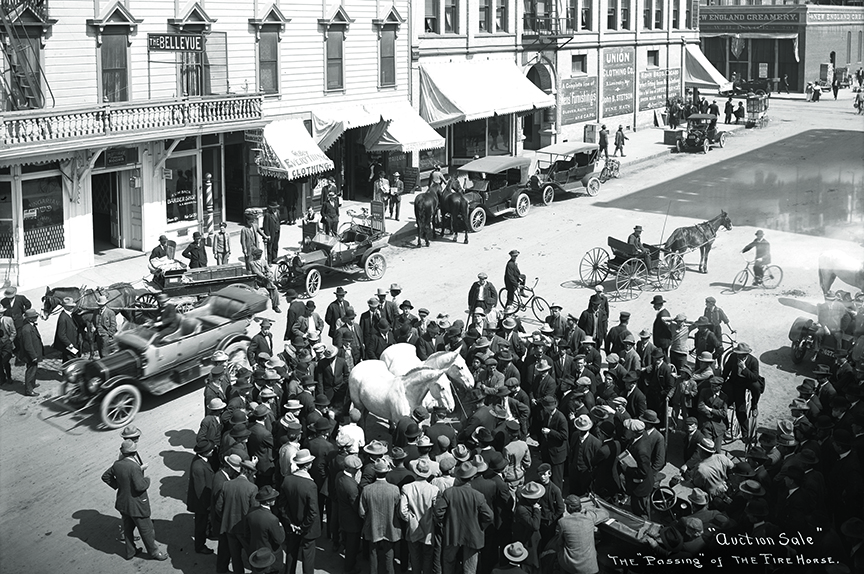 Fifteen San Diego fire horses were put up for auction at City Hall on March 8, 1913.

By 1913, San Diego’s modernizing Fire Department achieved national attention from the National Board of Fire Underwriters as one of the most efficient and innovative in the United States. The economic benefits of motorized rolling equipment were cited as essential to professional efficiency. On March 1, 1913, a San Diego Union article stated, “The installation of motor drawn fire apparatus has effected a remarkable saving in money, according to the report of Chief Almgren….One motor driven chemical engine answered 328 alarms during the year at an average monthly cost for gasoline and oil of $6.07. Other similar engines have cost little more than $5 a month for upkeep. They have replaced four and five horses each, whose upkeep averaged $100 to $125 a month. ‘The auto drawn apparatus has other advantages,’ says Almgren, ‘in being able to cover more territory at a greater speed, climbing hills where horses could not pull, and being able to respond to several alarms in succession without becoming exhausted, as horses would be. During the coming year four more pieces of motor driven apparatus will be installed, doing away with fifteen horses.’”

The public auction of those horses, nearly half of the Fire Department’s remaining stock, took place a week later at a horse broker’s stable located on G Street behind City Hall, the event seen here. Out of the 15 horses advertised, five two-horse teams found buyers, for a combined hammer price of $2,040, more than $53,000 in today’s dollars. The horse auctions continued as needed, and by 1917, the department was fully motorized, with some horses sold and others honorably retired to pasture on city-owned land.

The magnificent horses standing so patiently at the crowd’s center in Passmore’s photo were probably the same pair seen in a slightly older department photo, harnessed to the massive steam pump engine assigned to Engine Company No. 4, at Eighth and J streets.