This Hillcrest townhouse renovation is anything but ordinary 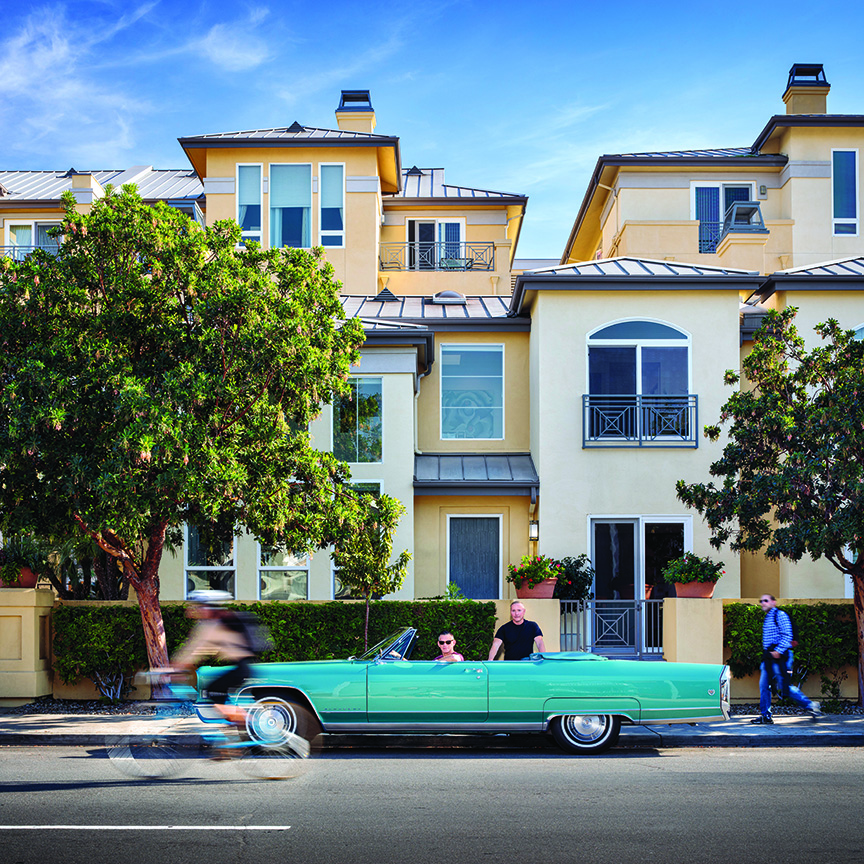 “Delicious” is how you might describe the three-bedroom, two-story townhouse that Barry LeBlanc and Michael McGee have made their 19th home in 28 years. Their residence snuggles in among a simpatico assemblage of butter-colored townhouses straight out of the playbook of intelligent inner-city redevelopment: leafy, with multifaceted frontages where neighbors can talk to neighbors on a quiet street not far from the cafe life of Hillcrest. For these row houses, “walkability” must be the first word on every real estate agent’s lips.

But deliciousness isn’t just about the outside. The adjective also comes into play when you experience what Barry and Michael have made of the inside with gently outrageous decor and a fabulous art collection on the walls.

They moved in here three and a half years ago. And yes, they were flipping. 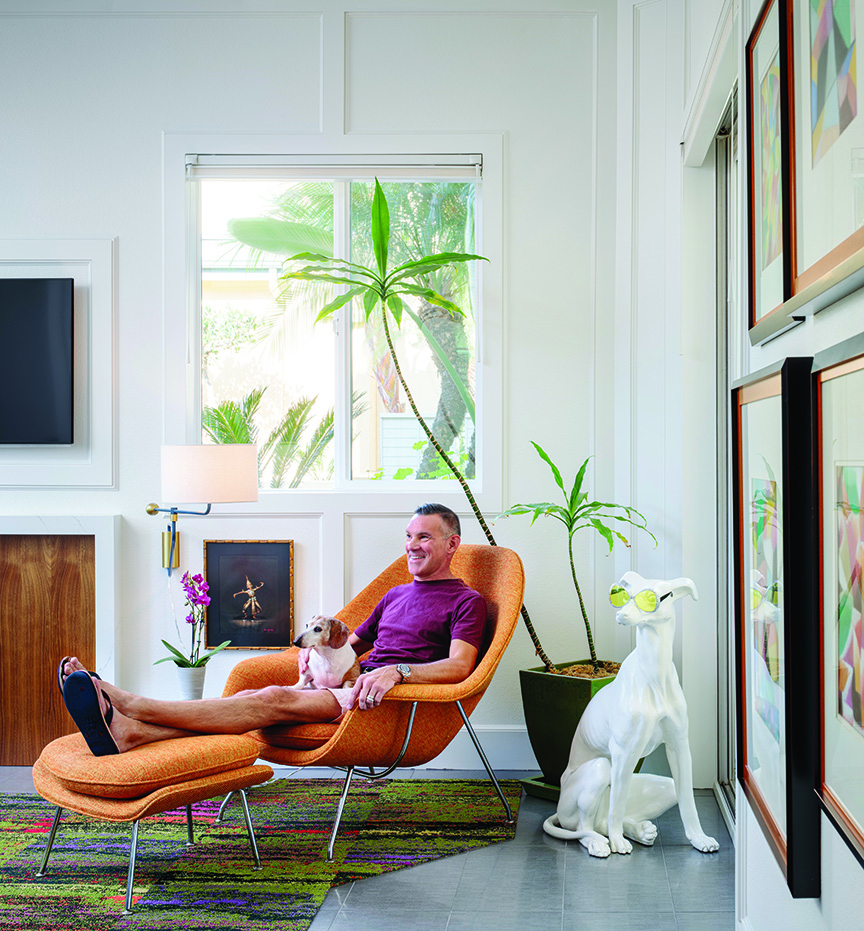 Jade, their 7-year-old dachshund, sits in Barry’s lap next to the life-size greyhound sculpture.

Barry says the idea happened when they met. “We both had full-time corporate jobs and it was a way to accomplish, to get further in life. We would buy a house, fix it up, sell it for a profit and move on to the next one. And again and again and again.

“We met in Atlanta in 1991, and started buying houses right away,” Barry continues. “I grew up with a construction background. My father was in construction. Michael and I both had an ability to work on it ourselves.

“So we were doing this in Atlanta for 12 years. And then, we decided we wanted to move away from our parents—as far as possible. And on Memorial Day, 1999, there was a special on an airline to San Diego. And it happened to be snowing in Atlanta on that particular day—in May. It was miserable. We got off the plane here, we crossed the [Coronado] bridge, and the boats were rocking ever so slightly, and it was 74 degrees and there was not a cloud in the sky, and it was just like stepping onto a movie set. We knew we were moving!”

Ever since that time, Michael and Barry have been adding value and reselling houses here. Then they heard about this Hillcrest townhouse.

“The biggest selling point for this was the location,” Michael says. “But also that we get a four-car garage here. Unheard of for a townhouse.”

“We have a little bit of a car problem,” Barry explains. “We collect cars. We have new cars and old cars. We have a ’66 Mustang convertible, and a ’66 Cadillac Eldorado convertible. We have five convertibles. Hey, it’s Southern California! And we have two other cars as well. 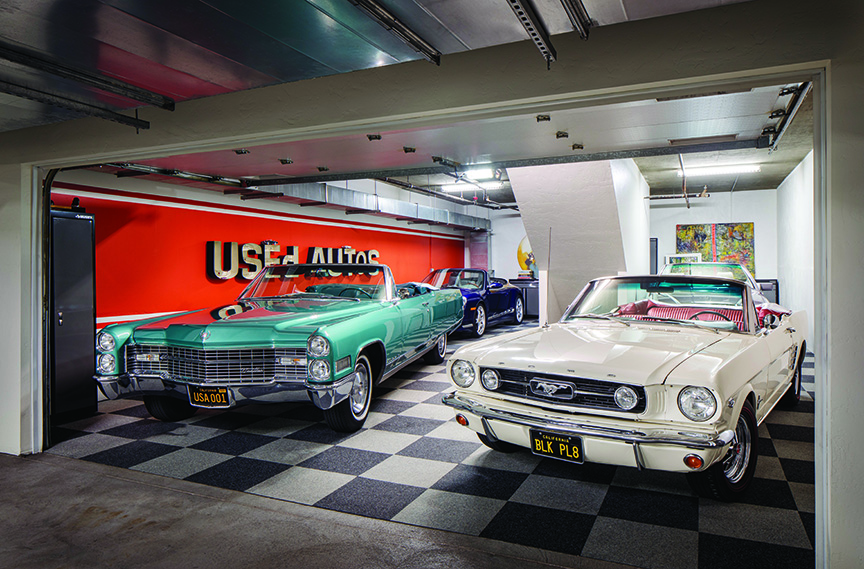 Barry LeBlanc and Michael McGee have amassed lots of art over the years, but it was in this house (their 19th) that Barry clustered some of them together like this. He spray-painted the console beneath for an added pop of color.

“Part of the reason we bought this house was we wanted something simpler to live in. The last one was an old house, a 1928 Spanish [style] in University Heights. We were getting to the age—I’m 56, Michael’s 57. We’ve been together for 28 years. We’ve been through 90 cars, 19 houses, 9 dachshunds—and we wanted to work a little less, travel a little more. We wanted something that was going to be easier to lock and leave.”

They had another reason to choose this place. “We are crazy for dachshunds,” Barry says. “We have three now: Jade, who’s 7 and deaf; Cooper, 7; and Joey, who is 15 and deaf and nearly blind. We love them because they’re hilarious, and mischievous and think they’re big, bad dogs. But they can’t climb stairs easily. It’s the reason we sold our last house. We were carrying them up and down all the time.

“In this house, they don’t have to go upstairs. And it is so much easier to let them out, having our own private entrance. It feels like a single-family house. This has the right layout where we have a bedroom 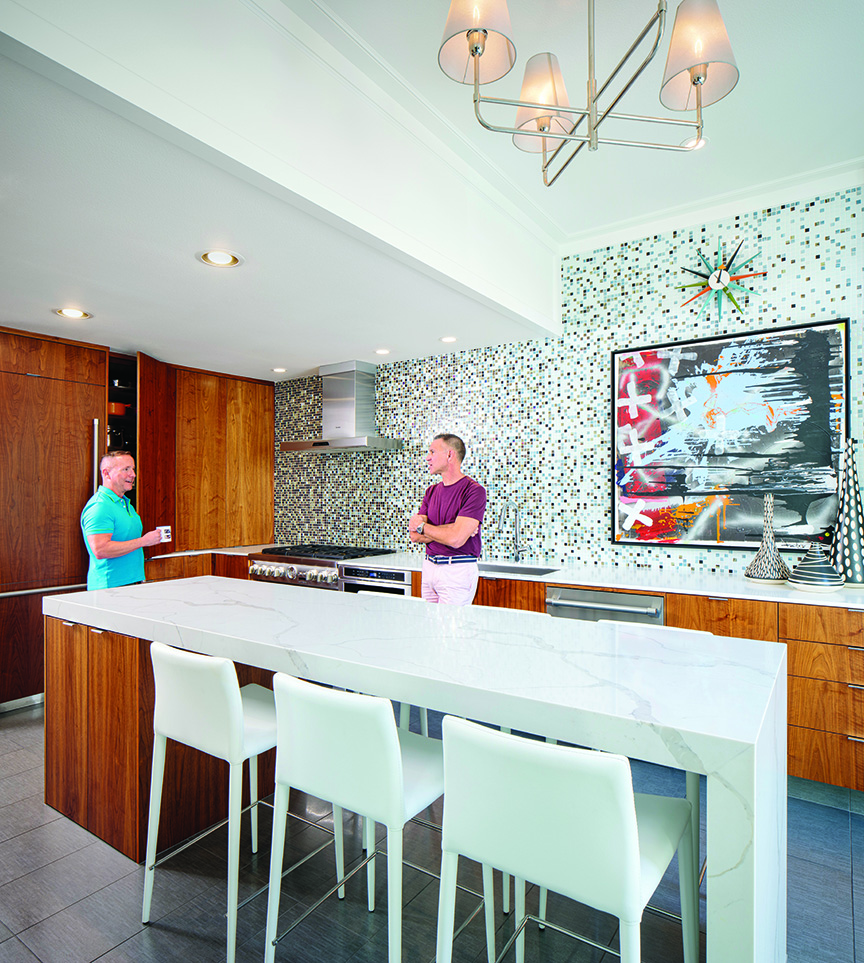 Barry selected the iridescent glass mosaic tile gradient to go from dark to light as the eye travels left to right in the kitchen. Countertop-to-ceiling cabinets keep necessities such as Michael’s coffee station out of sight but easily accessible.

down here and two other bedrooms upstairs. And we use this downstairs bedroom as Michael’s office. And that’s where the doggies stay too. So they never leave this floor. The layout was perfect. It’s just that everything you saw was ugly.”

He says the property was built in 2004. “It was very dated. The people who lived here before were into gold. The floors were gold, the walls were gold, the fixtures were gold—everything was gold.”

“They had vinyl flooring in the bathrooms,” Michael, who’s a mortgage broker, chimes in.

“Not a problem,” says Barry, who’s a real estate notary. “We have done this many, many, many times.”

But behind the brick and mortar, it is art that has captured Barry’s heart in this process, along with a kind of nostalgia. “This place really felt like a New York brownstone or townhouse. I wanted to create the feeling of living in the mid-’60s. I love the cleanness of midcentury modern. I wondered how those two would match up.

“You’d have that very colonial, dignified framing that you’ll see throughout the whole house, where almost everything is done like a panel—very big in New York. All those glamorous walk-ups, townhomes, are done so elegantly, and still matched up with materials of the day of the mid-’60s, which was walnut, marble, light, bright colors. But instead of doing a lot of color on the walls, we wanted to highlight the art. Art is another passion of ours. So all of the art had to be placed before we did any construction whatsoever. I had to know where the art was going to go beforehand, and then basically reverse-engineer where all the trim and the pieces were going to go around each piece.”

For instance, they commissioned an 8-foot-long  painting from a local artist they love, Eliza Tolley. “We have five or six of her paintings. But I had to know where it went first, because when the carpenter was here to create all this woodwork, he had to know exactly where it was going to be, so he could create a frame around it. It’s almost like a hanging easel.”

That is just the first of the artistic installations Barry has engineered, from a 3D metal abstract sculpture to the spectacular—and very expensive—fish-scale silver wallpaper in the master bedroom, to the Eames, Knoll and Le Corbusier furniture in the living room, not to mention the dachshund art everywhere. Or the full-size greyhound sculpture looking out the courtyard window, wearing Elton John glasses. Or, let’s not forget, the automotive art of the Eldorado and Mustang downstairs in their private four-car garage. A townhouse of delights indeed. It could just be that the dogs won’t let Michael and Barry flip this one. 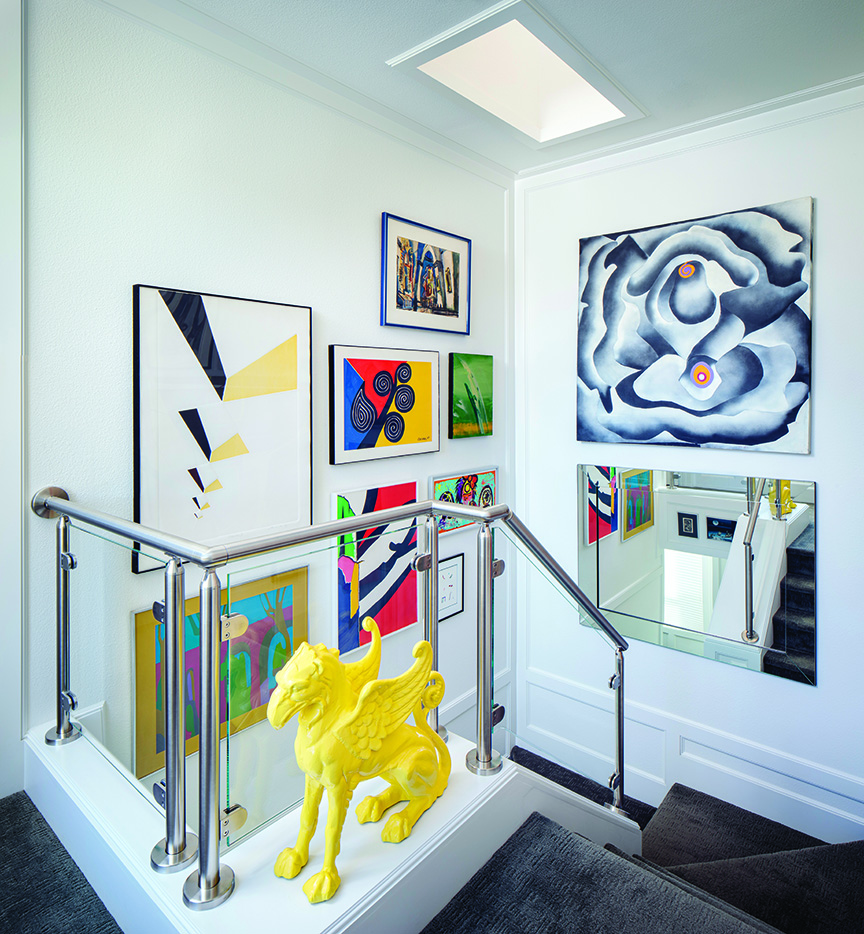 While art occupies many of the walls in Barry and Michael’s home, Barry says it’s important to keep some walls bare. “When moving about the house, your eyes need a place to rest so your brain doesn’t hit over-sensory mode,” he explains.

How to hand artwork correctly

Barry LeBlanc cleverly hung artwork throughout the home he shares with husband Michael McGee. He gave us his best tips.