From a sleek lap pool to a Japanese cat figurines collection, the interior aesthetic leaves traditional exterior behind. 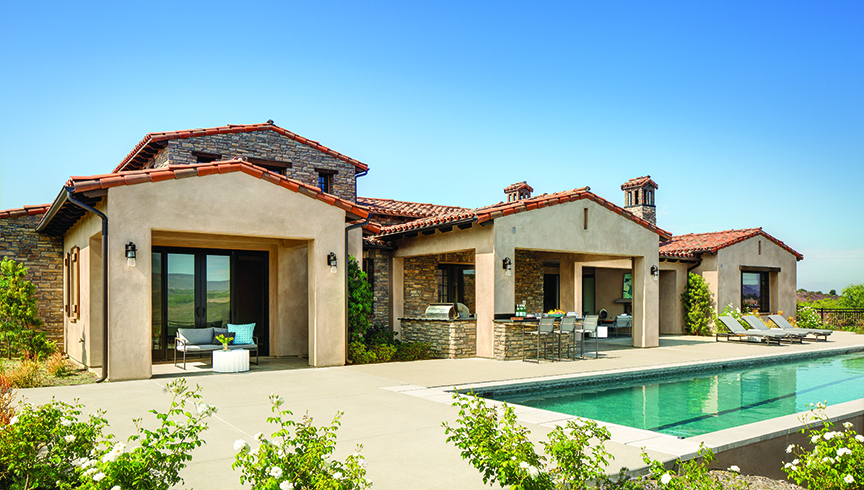 Robert and Mara chose a Tuscan-style home from the handful of variations permitted at Santa Luz. To add a contemporary touch, they installed a modern version of Tuscan wall sconces and opted for stacked stone.

Robert and Mara Opalsky delight in the ocean. They scuba dive and make special trips, especially to Bonaire, an island in the southern Caribbean, for the sport. They also have an affinity for midcentury-modern design.

“We have that in common,” Robert says. “Both our dads, who are still around, had the Eames chair, so we both grew up with that sensibility.” Why, then, did they choose a terra-cotta roof-tiled, Tuscan-look home in a waterless landscape?

Take a drive around the gated community of Santa Luz where the house sits, and you’ll know. This paradise, characterized by rolling country hillsides, intrigues like the magical Eden of a Lord of the Rings peace-filled shire landscape. “We have stressful jobs,” Robert explains. “We saw our lot, with its open canyon view that will never be built out, and it matched what we wanted: a tranquil, calm place.”

Yes, the house does have a natural stone exterior, which gives it that Old World elegance, but Monty McCullough and Wesley Nelson of McCullough Design Development stacked the stone façade in a linear fashion for a tad of untraditional Tuscan modernity. Beyond the front door, which Robert and Mara designed together incorporating intricate custom iron work and frosted glass, the interior’s essence takes a decidedly more contemporary turn. Inside, the desire for an overall simple, clean-lined look reigned, but Robert and Mara also had their heart set on each bedroom and bath having their own personalities. The resulting deluge of material choices made definitive decisions tough.

“Monty and Wesley were doing a fantastic job but we were struggling toward the end,” Robert admits. “We were running out of time and there were still quite a few details to finish up, a lot of selections to make such as lighting and materials for flooring and countertops.

“We found Dawson Design on Houzz and Anita [Dawson] came in at that stage and saved us.” 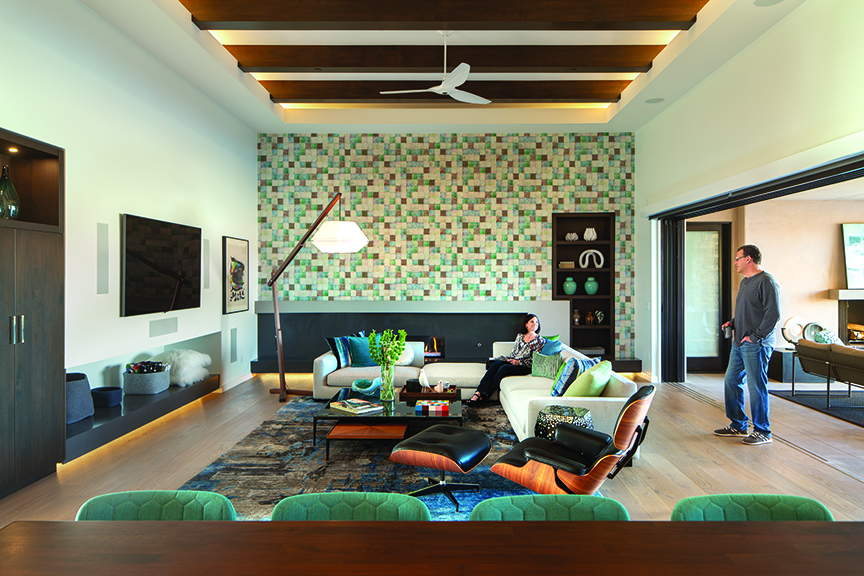 Robert and Mara enjoy their living space, which travels openly from indoors to out and from living to kitchen and dining spaces.

The finished 5,300-square-foot home contains a guest suite upstairs and three bedrooms, a home office, gym, craft room and great room (a kitchen, dining area and living space that’s open to the patio and lap pool) downstairs. “It may be big but it doesn’t feel imposing at all,” Anita says. “It’s a very quiet house; a welcoming house. Instantly at the entry you can see that this is not your average custom home. The foyer, with its simple, yet modern chandelier and console sets the stage for a different kind of aesthetic and lets you know that the homeowners are willing to take risks.”

In the great room, oohs and aahs go to the expansive view first. With its stretch-to-the-sky ceilings, the space would feel cavernous except for sophisticated—not rustic—wood beams. Next, attention diverts to colorful patterned wallpaper. “It’s a striking detail, a metallic patchwork of greens and blues with an iridescent look on a large wall,” Mara says. “People go up to it and touch it and are surprised it’s not tile.”

The sleek, rectangular fireplace here, designed by Anita, delivers a contemporary artwork vibe. A recessed area with a hearth echoes the fireplace’s minimal look—in the reverse—on the adjoining wall. “That wall is kind of a negative space and the fireplace wall is a positive space,” Robert explains. “They mirror each other so that if you pulled the walls together, the fireplace would fold into the recessed wall. It’s an interesting design detail.” The long, black rectangle of the fireplace repeats at the kitchen’s countertop on the other side of the great room, giving the space an organized rhythm. 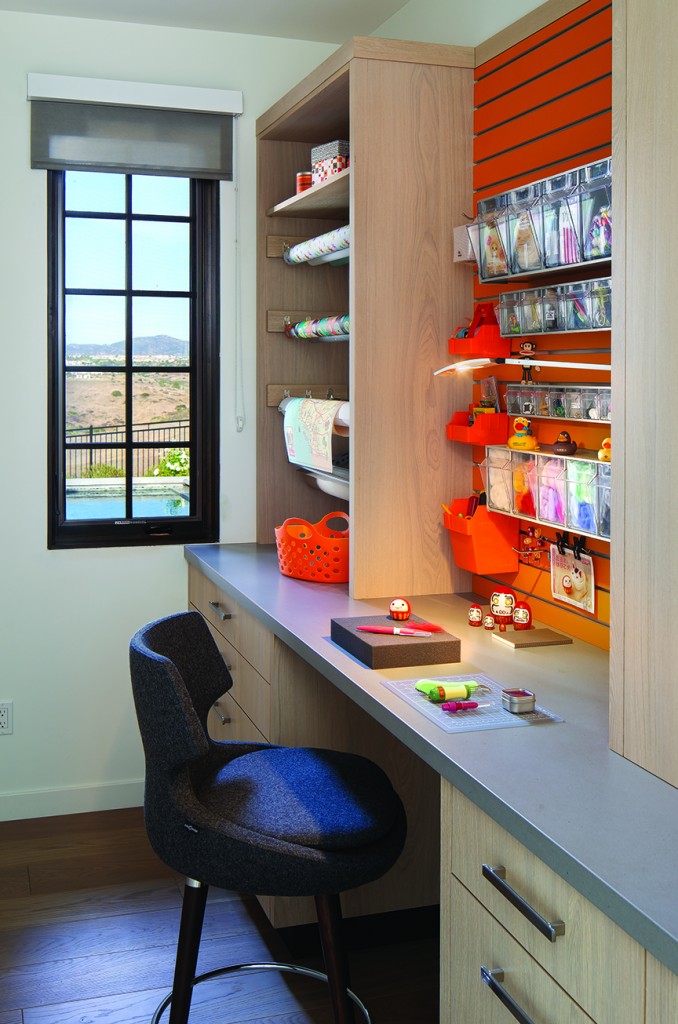 The home office (top) and Mara’s craft room (below) celebrate simplicity in design and clutter-free organization.

Mara and Robert are looking for just the right art pieces to place in a niche above the cooktop’s hood (that also has a material relating to the fireplace). In the meantime, the opening houses a ceramic maneki-neko collection, Japanese cat figurines said to bring good luck. Other Japanese moppets can be found in Mara’s tiny craft room behind the dining area where, when she has time to relax, she can be found shaping felted wool into adorable Japanese fictional characters and Daruma dolls (Japanese dolls modeled after Bodhidharma, the founder of Zen).

“I used to live in Japan and I have an affinity for the Japanese aesthetic,” Mara says, speaking not of the figurines, but rather of the home’s uncluttered, Zen style, which results in its serene sensibility. The way McCullough Design Development organized the residence gives spaces an airy feel and an ease of movement. For example, the layout places oven walls, a dedicated coffee station (“I’m a coffee addict,” Mara says, laughing, and then adds, “decaf coffee”) and a secluded pantry along a hall on one side of the kitchen. A gym and two guest bedrooms—one of which is age-in-place, wheelchair accessible—live down the hallway along the kitchen’s other side. The footprint then places the master bedroom suite and home office on the opposite end of the great room.

“This suits our lifestyle,” Robert explains. “It works well for us as far as maintaining privacy for our guests when we have someone staying for several weeks. We are really happy to have a home where we can have guests stay for extended periods and feel comfortable.”

Long hallways equipped with special lights create a gallery space for the couple’s art collection, displayed here as well as in rooms. “My dad had a side business of a frame shop,” Robert says. “A lot of times he took prints and other pieces in trade for framing. Some of the pieces we have here are from that time. We also have some prints from Thailand and Mara likes Japanese woodblocks. Some pieces I have from the ’60s and ’70s are woodblock prints.”

Artworks and a fun use of color add whimsy to the overall minimalist style. Happy hues, light woods and an easy, uncluttered design combine to create a lighthearted, cheerful home where carefree living abides.

“This place fits our needs perfectly—now and into the future too,” Robert says. “It has all the elements we were looking for.”

“In the morning, with my cup of coffee in the kitchen, I look out and see the sunrise from our canyon view,” Mara continues. “It’s such a great place. We are really lucky to live here.”

Japanese block prints feature prominently in the master bedroom. A hint of happy orange in Clyde Turner’s custom dresser and nightstands contrasts with deep blues elsewhere. Nightstand lights can be used as reading lamps or to create subtle, indirect light.