Baths of the Year 2020: Bigger and Better

Modern mingles with Old World in this year’s winning bathroom 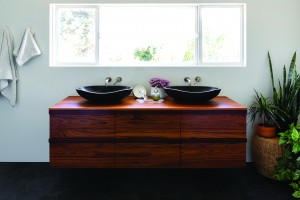 All photography by Jenny Siegwart.

This year’s winning bathrooms, judged by Ashley Goldman of The Gold Hive, Tatiana Machado-Rosas of Jackson Design & Remodeling, and Linda Medina of Linda Medina Interior Design, are filled with style surprises, including an up-and-coming material rarely seen in this interior space.

To gain size, Josh Fischer of San Diego Bath & Tile, Inc. stole the space from a large, basically unused area in the master bedroom that provided seating in front of a picture window. “It was obvious we could use that entire space, which was about 10-by-15 feet, to triple or even quadruple the master bathroom’s size,” he says.

It was decided this new area would be a fabulous spot for the vanity because it would leave almost the entire rest of the room for a new shower and soaking tub. There was no need for privacy (“There’s our yard with nothing behind it and beyond that there’s a cemetery,” Kelyn says), but looking out a window toward a natural space instead of looking at yourself in a mirror while brushing your teeth was a peculiar concept. But Kelyn and Jason embraced the idea. “It’s actually refreshing for us not to have a mirror there. It sounds weird but you don’t get so focused on staring at yourself,” Kelyn explains. 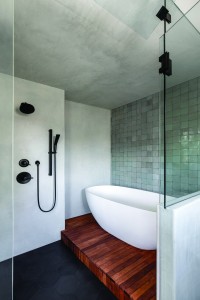 The tiles behind the tub were made by hand with natural clay.

“We knew the floating teak vanity would set the tone as you entered the space,” Josh adds. “To tie that in with the shower, we ran the same teak material, cut into slats and installed over black porcelain tile, on the raised-tub platform.”

The shower and tub coexist within the same glass enclosure. A subtle touch of soft color was brought into the bathroom with the tub’s zellige backsplash tile. Handmade, the natural clay tiles carry the charm that goes with imperfection. “When I saw the color and the variation on the edges when that tile was shipped to us, I was over the moon,” Kelyn says. “It would be a very different bathroom without that tile on the wall.”

It would also be a very different bathroom if Kelyn hadn’t opted for plaster in the shower. “If there’s any story to this bathroom, it’s around that plaster,” Josh says. “It was the natural look and the modern yet Old World feel that drew Kelyn to it. Although we’ve specked out a lot of tile, this was new for us—a whole new trade. Artisans in Europe have been using plaster forever but there’s a reason you don’t see a lot of it here. It’s a luxury finish that requires a whole other level of detail than tile.”

“I thought adding another tile would get overwhelming,” Kelyn adds. “I wanted it to be simple. I love the way the plaster feels. It’s almost soft—almost fuzzy. Josh actually went to Vegas so he could get trained in it. It has held up so well. It almost ages, like a patina, with its color weathering or changing to add character over time.”

“The way we took the plaster and integrated the tile and teak is something different,” Josh says. “Everyone working on the project felt it was something special for sure. You can’t help but like this. It’s pretty damn cool.” 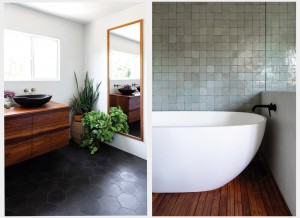