Where to eat, drink and ska in San Diego this weekend

Between the frenzy of food halls and a ska-themed Asian fusion spot, there's no shortage of new meals to try. 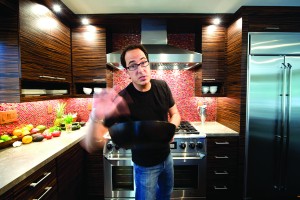 Sam the Cooking Guy is expanding his dining footprint with Graze in Little Italy Food Hall.

SAM ZIEN, aka Sam the Cooking Guy, became Sam the Restaurant Guy with the debut of his offbeat taco shop, Not Not Tacos, in 2018. He’s set to expand his dining footprint with the opening of Graze, located in a new addition to the Little Italy Food Hall, where his taqueria is ensconced. Graze will feature indoor and outdoor dining, with an international roster of sandwiches and salads, segueing to shareable plates for evening meals; there will also be a full bar, bottle shop and a lineup of wine and beer tastings.

There’s a heaping helping of Italian culture at another food emporium, RoVino The Foodery in the East Village. It boasts of being San Diego’s largest Italian market and is a spinoff of Little Italy’s charming RoVino Rotisserie + Wine. Sit-and-stay or grab-and-go, there’s a 55-seat, full-service restaurant and wine bar (with happy hour), as well as a bakery, deli and all the fresh, housemade pasta and imported ingredients to keep home chefs happy—not to mention Illy espresso and more than a dozen rotating flavors of gelato. 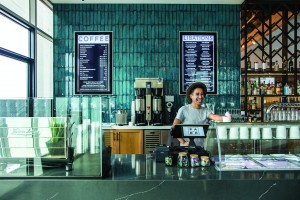 Food halls are as hot now as a Baby Yoda ASMR pickleball podcast, so it’s no surprise yet another one has debuted: Park Commons. Located in Sorrento Mesa, it was created by the brain trust behind Whisknladle and Catania, Ryan Johnston and Arturo Kassel, so it has legit cred.

It’s open for breakfast, lunch and happy hour, offering everything from hummus to hamburgers, making it a godsend for nearby office workers.

Meanwhile, over at Liberty Public Market in Point Loma, new tenants have joined the roster of the more than 30 vendors in the 25,000-square-foot venue. Asian fare is making a strong showing with the arrival of awkwardly named Bopjo Seoul in a Bowl … Or Tortilla!, a mashup of Korean barbecue and Mex influences; Bao Bar for boba milk teas and steamed buns; DuO Confections, serving up a popular Hong Kong-style street snack that wraps scoops of gelato into plump, crispy waffles; and an outpost of popular North Park eatery Chris’ Ono Grinds Island Grill, dishing out authentic Hawaiian fare. Other additions include a Nashville-style hot chicken spot, Liberty Chik Hot Chicken, and barbecue joint The Pig’s Gig, from the folks at Mastiff Sausage Co.

MONIKER, the hipster dream factory in Liberty Station that has its fingers in everything from community workspaces and custom furniture to clothing and coffee, has launched another foray: cocktail catering. In conjunction with its creative in-house bar, Moniker Cocktail Co. is offering full-bar service and custom cocktails, as well as coffee and tea service, for parties and events. What could be better than a hotshot bartender and a curated, personalized cocktail menu at your next soiree? 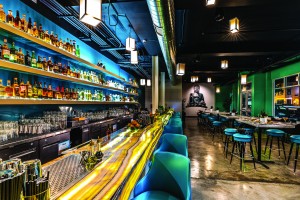 Sit and sip an Asian-inspired cocktail at SKA Bar & Restaurant.

You’re free to wear a pork pie hat and skinny tie to the new SKA Bar & Restaurant, (that, as the signage in front points out, is in “Abnormal Heights,”) but this new Asian fusion spot has nothing to do with ska music.

It’s a stylish, industrial space with a rooftop deck, part of a mixed-use building on Adams Avenue, serving fare like spring rolls, dumplings and grilled skewers, along with items that mix American pub food with Asian influences, like a burger with a kung pao sauce and fries topped with bulgogi (Korean poutine!).

Complex cocktails also go the fusion route, like a gin drink with ginseng bitters and Thai basil, or the Dark Magician, with the unlikely ingredients of rum, taro root, singani (a Bolivian spirit similar to pisco), rhubarb liqueur, yogurt, vanilla, lemon, and plum bitters. After a couple of those you might be ready to do some skanking, but that would be madness.