Beauty in a Box

Concrete, wood and glass unite for a simple home sanctuary 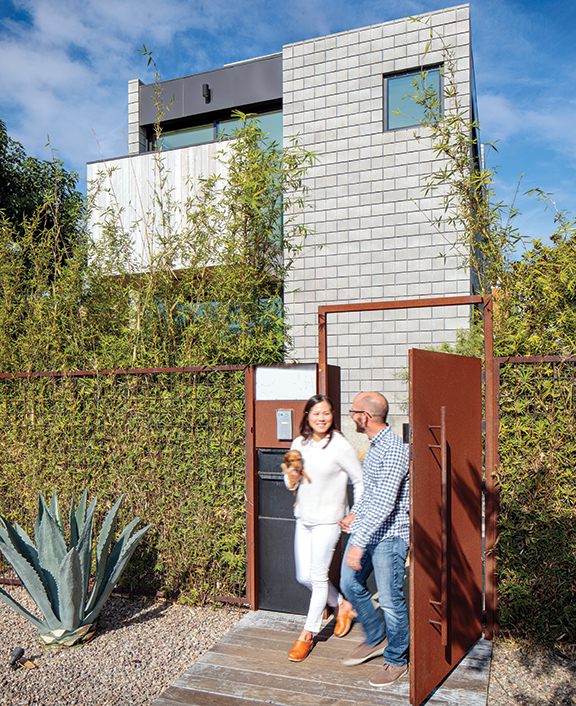 Elizabeth Yu and Allan Hansen walk through the corten-steel gateway of their La Jolla home, where greenery provides privacy

If you think that owning a small, rectangular lot next door to a high-school football field with action-packed games, sis-boom-bah cheerleading exercises and boom-bang-smash band practice precludes you from building a quiet home haven on the property, you’d be wrong.

“It is not the most ideal lot in La Jolla,” architect Dominique Houriet of [oo-d-a] Studio Inc. admits of the property owned by his clients Allan Hansen and Elizabeth Yu, “but it had belonged to the family for more than 60 years.”

“My grandma moved here in the ’50s from Mexico,” Allan explains. “The lot had a beach cottage that we bought in 2012.”

That was the same year their daughter Sage was born and the decision to expand the tiny living space was made. But a beach cottage was not the aesthetic of Allan and Elizabeth’s dreams. Allan grew up in a modern, concrete residence in Tucson, Arizona. To him, closed-off rooms were the antithesis of cozy and, as an adult, he still breathes easier in unwalled, open spaces where lines between inside and outside blur. Elizabeth, too, favors a more contemporary, simple style. She loved the openness of the converted Rhode Island loft the couple lived in before they moved to San Diego to complete their medical residency training at UCSD in 2006. 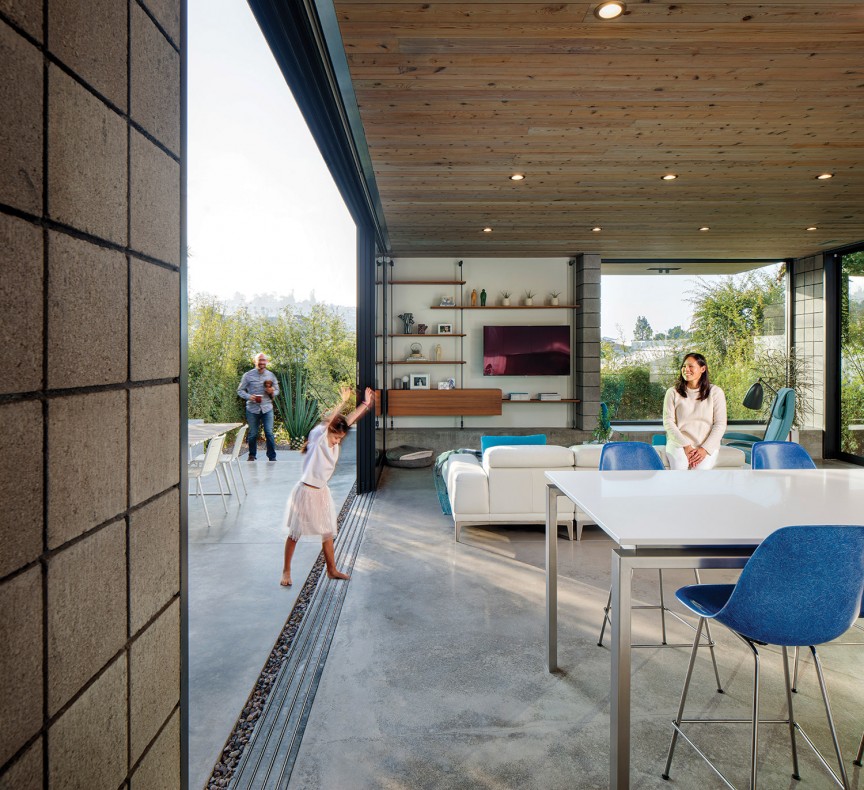 “We knew what we wanted to do,”

Elizabeth, now a pediatric gastroenterologist, says about their new-home build. “We wanted to maximize the efficiency and usage of the small lot we had. We wanted open space rather than multiple rooms. We wanted to blend indoor and outdoor spaces. We wanted simple, clean, as zero-maintenance as possible.”

In other words, they wanted to emulate Allan’s childhood home—as well as another modern home in their neighborhood that belonged to a friend. During a party at the friend’s home, Elizabeth and Allan met Dominique. They discovered the house they admired was one of two contemporary homes around the corner from them that Dominique had worked on with his previous boss Sebastian Mariscal. A short time later, the couple hired the architect—but more than a year passed before they could even begin construction. It turned out the size and location of the lot were not to be the main problems in building a new home more suited to their liking. During permit review meetings some board members were not on board when it came to the home’s design.

“It was crazy…hilarious looking back at it now,” Dominique says. “I showed them my design in 3D. There were nine individuals who came to vote and I needed a majority vote. I ended up with four votes ‘yes’ and five votes ‘no.’” 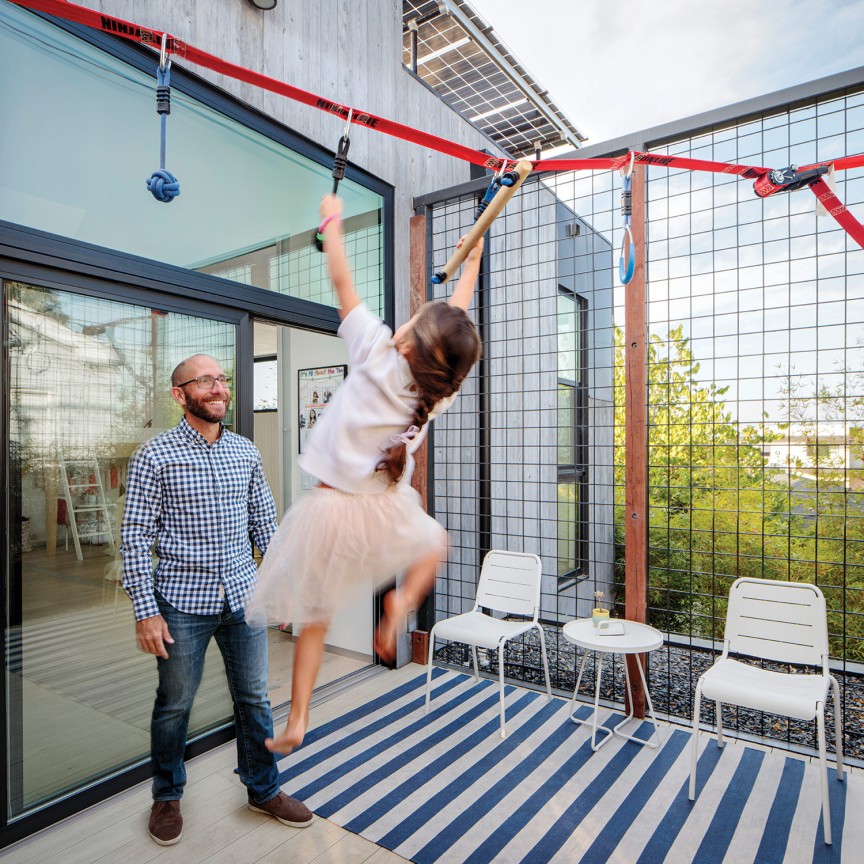 At issue was the intensity of a just-more-than-3,000-square-foot, two-story, rectangular home with an attached, two-car garage on a 4,010-square-foot lot (which was legal and an acceptable density level). A neighbor wondered if the flat-roof deck that included solar panels would cause flooding. But with plans for a roof garden to capture rainwater, a catchment system for rainwater to be used as irrigation and a French drain around the house, that possibility was as unlikely as a rain storm in the Atacama Desert of Chile, the driest place on earth. 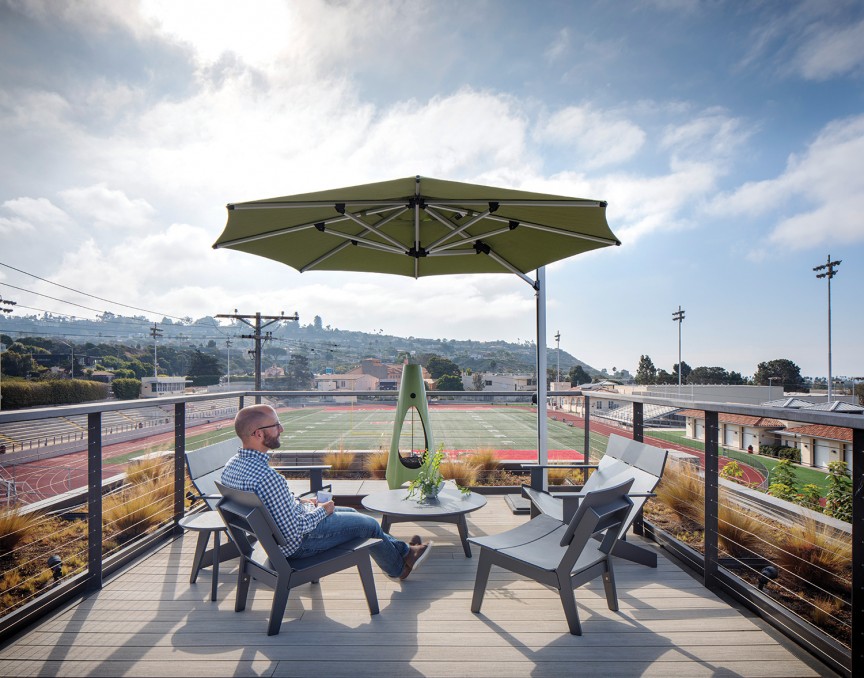 An oversized umbrella keeps Allan comfy as he contemplates life’s joys from his rooftop deck. 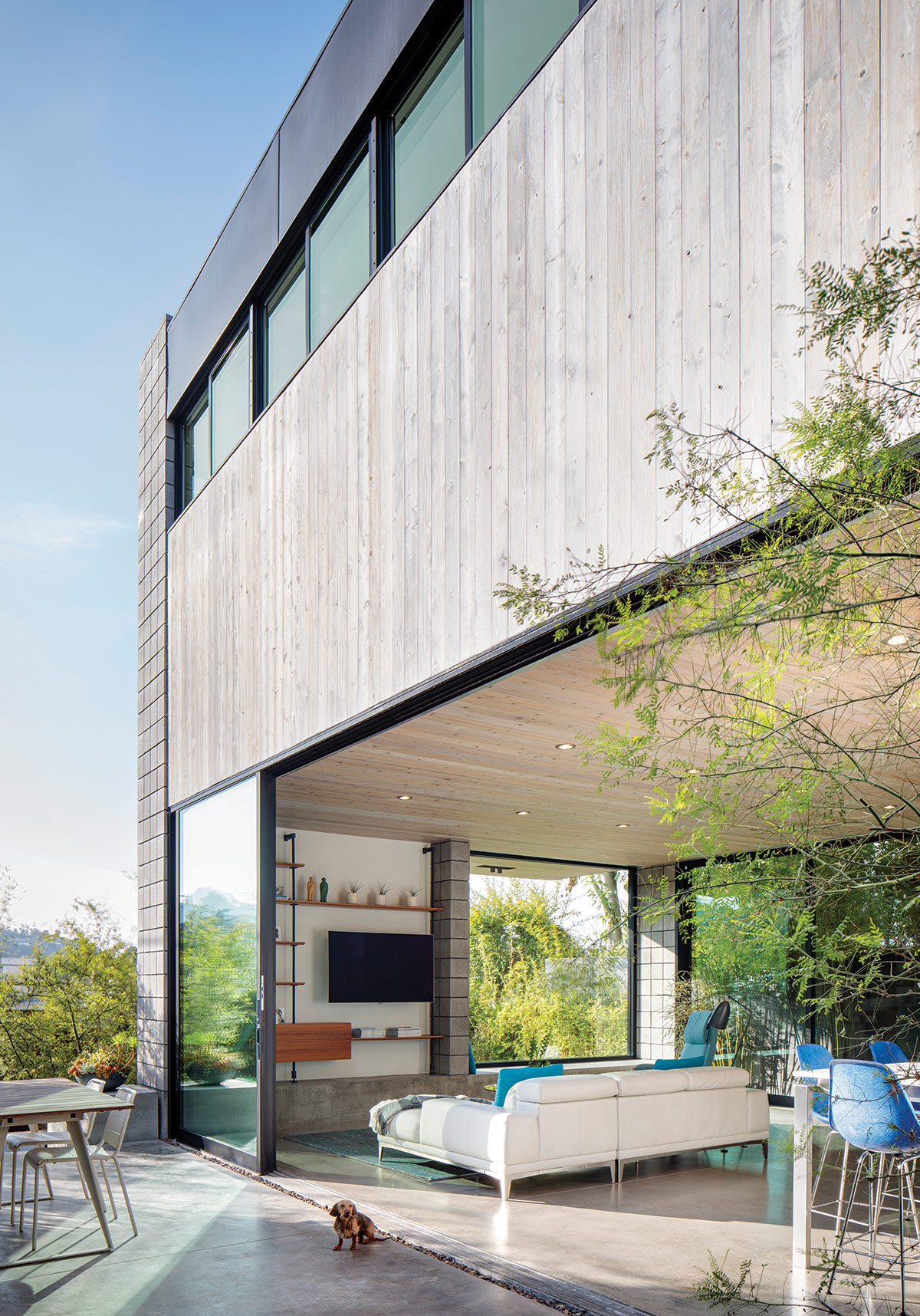 Rose, the family’s mini-dachshund, bravely faces the camera as she guards two kitchen-eating areas—one inside and one out.

“We wanted to maximize roof space,” Elizabeth says. “In La Jolla there are a lot of pitched roofs that underutilize the space. If you go up two stories, you have a huge ocean view.”

Another argument: The rendering did not “pay homage to the neighborhood”—a neighborhood with a high school next door to and a nursing facility across the alley from a residential area.

The main contention seemed to be the home’s style. “It was modern and [according to the review committees] modern didn’t belong in the neighborhood,” Dominique says. “I can see those two houses that I did with Sebastian a stone’s-throw away. I can see apartments, all square and not Spanish style [tiled, pitched roofs were the preference at the meeting]. They got a petition of 150-plus signatures saying ‘no’ to this project.”

Dominique’s next step was to take his design to the San Diego Planning Commission, who, despite opposition from La Jolla community advisory boards, approved the layout. “They praised us all the way down, saying this was a perfect house and that it made total sense. It took us a year extra, but in the end, I didn’t have to compromise anything.” 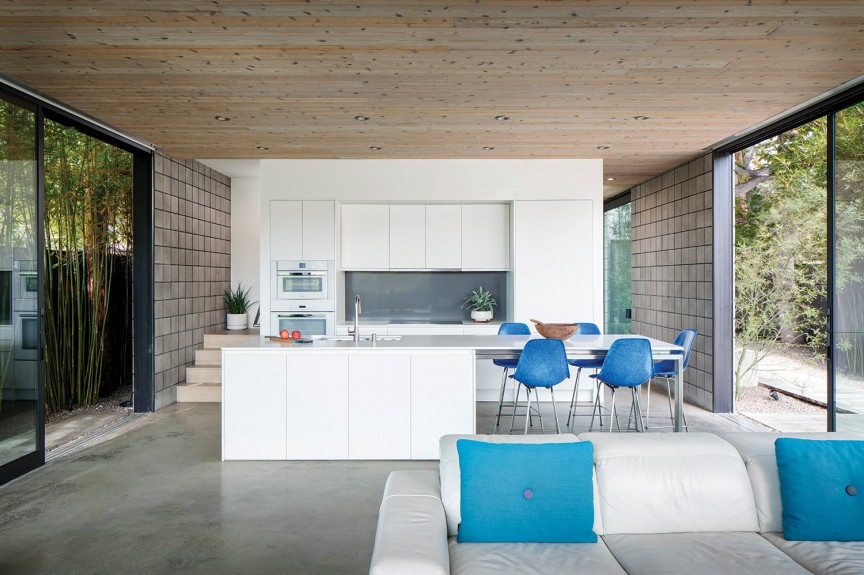 “Before the design started, I visited Allan’s [childhood] home,” Dominique says. “I noticed the house was built of CMU [concrete masonry units], 8-by-8-inch modules of scored block. I knew I couldn’t go wrong with it as it was a material that would have nostalgic properties for Allan. You can use it on the outside and the inside, killing two birds with one stone.” Plus, natural concrete block “is the waterproofing, finish, paint, insulation—everything.”

Surrounded by bamboo, the home is an almost-hidden oasis. On the outside of the corten-steel gate, there’s the hustle and bustle of children being dropped off or picked up from school, horns honking in the busy alley that separates the house from the nursing home across the way, and the rah, rah, rah of everything football. Inside the greenery, Dominique created a private, quiet realm where the family lives an indoor-outdoor lifestyle. 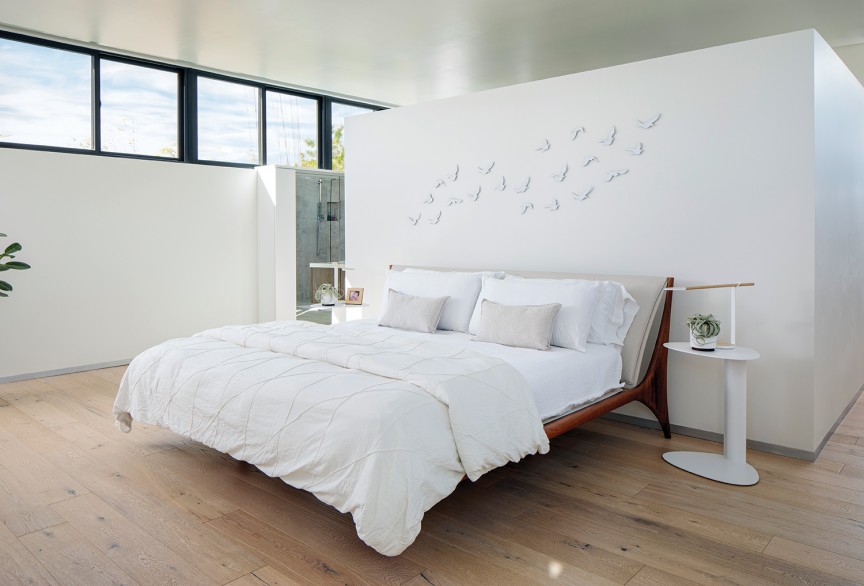 “It’s a peaceful sanctuary,” Elizabeth says. “The living room and kitchen open up completely on both sides. On one side is a small walk space, open to the bamboo. On the other, there’s a table, so we can eat outside, and an outdoor cook space with a custom barbecue…” 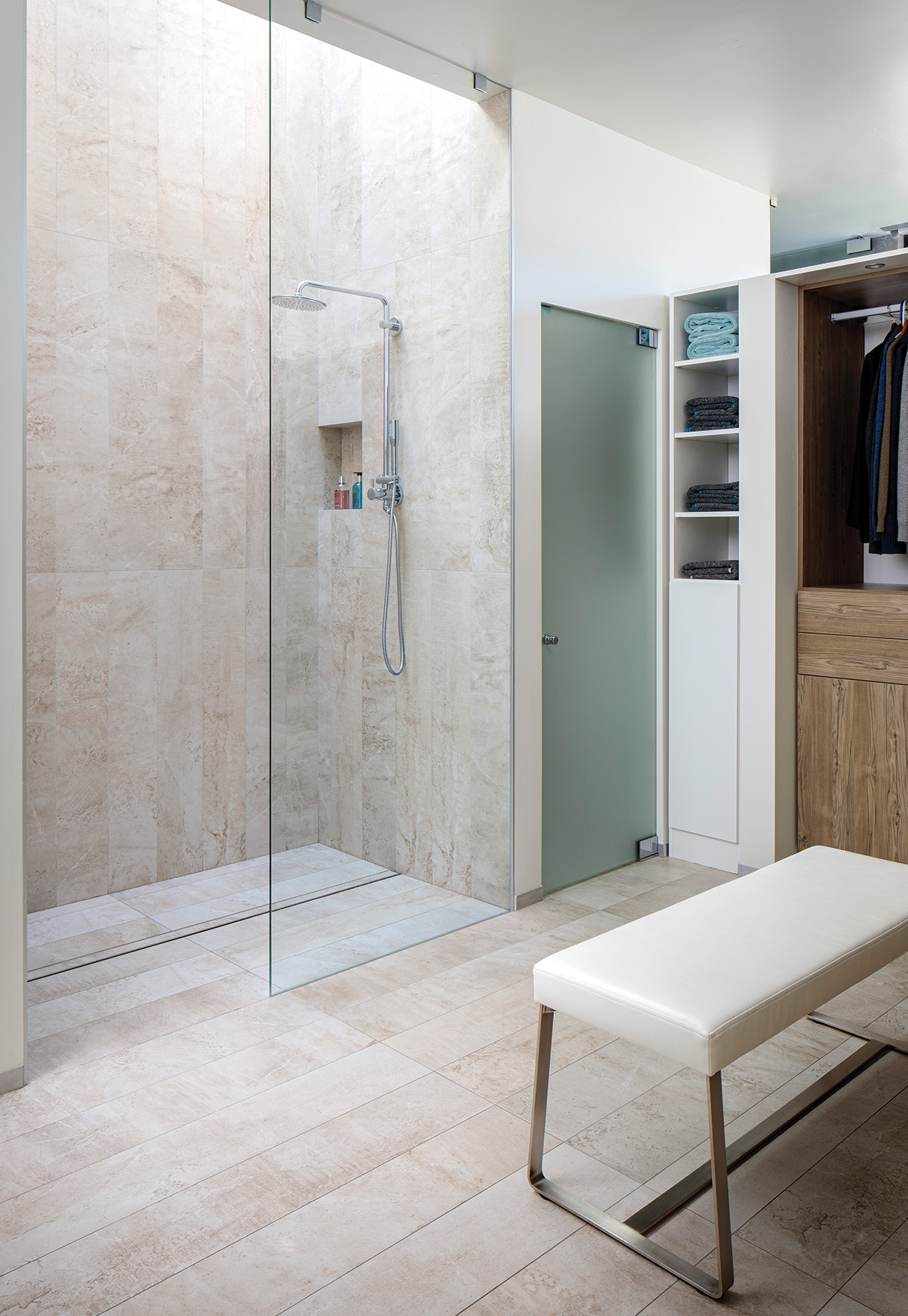 Closet and shower share the same space just behind the bed’s wall.

“…A cast-in-place concrete gas and charcoal grill,” Allan says, jumping in. “I love to grill. Dominique came up with that so I can cook out there even when we eat inside.”

Obviously, this smart construction material wasn’t just used for walls. Besides the grill, cast-in-place concrete makes up the hardscape flooring outside, then travels inside too so that when the 40-foot-wide glass sliding doors open, the indoor-outdoor transition is seamless. It also was used for built-in window seating in the open living-kitchen area. Imported Danish furnishings here match the home’s clean aesthetic as does the kitchen’s minimal melamine cabinetry. Appliances that meld with cabinet hues seem to disappear into the basic ease.

“This area is the central gathering space for the family,” Elizabeth says. “Sage can be downstairs chatting with us, playing with our mini-dachshund Rose. Dad walks over every morning—my parents live in La Jolla, too, just .8 miles away.” 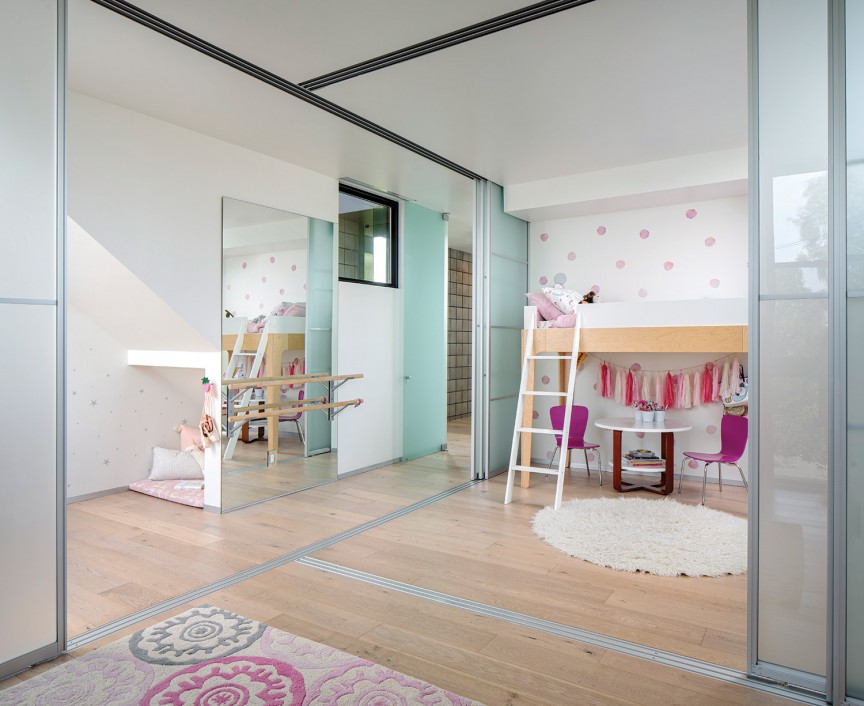 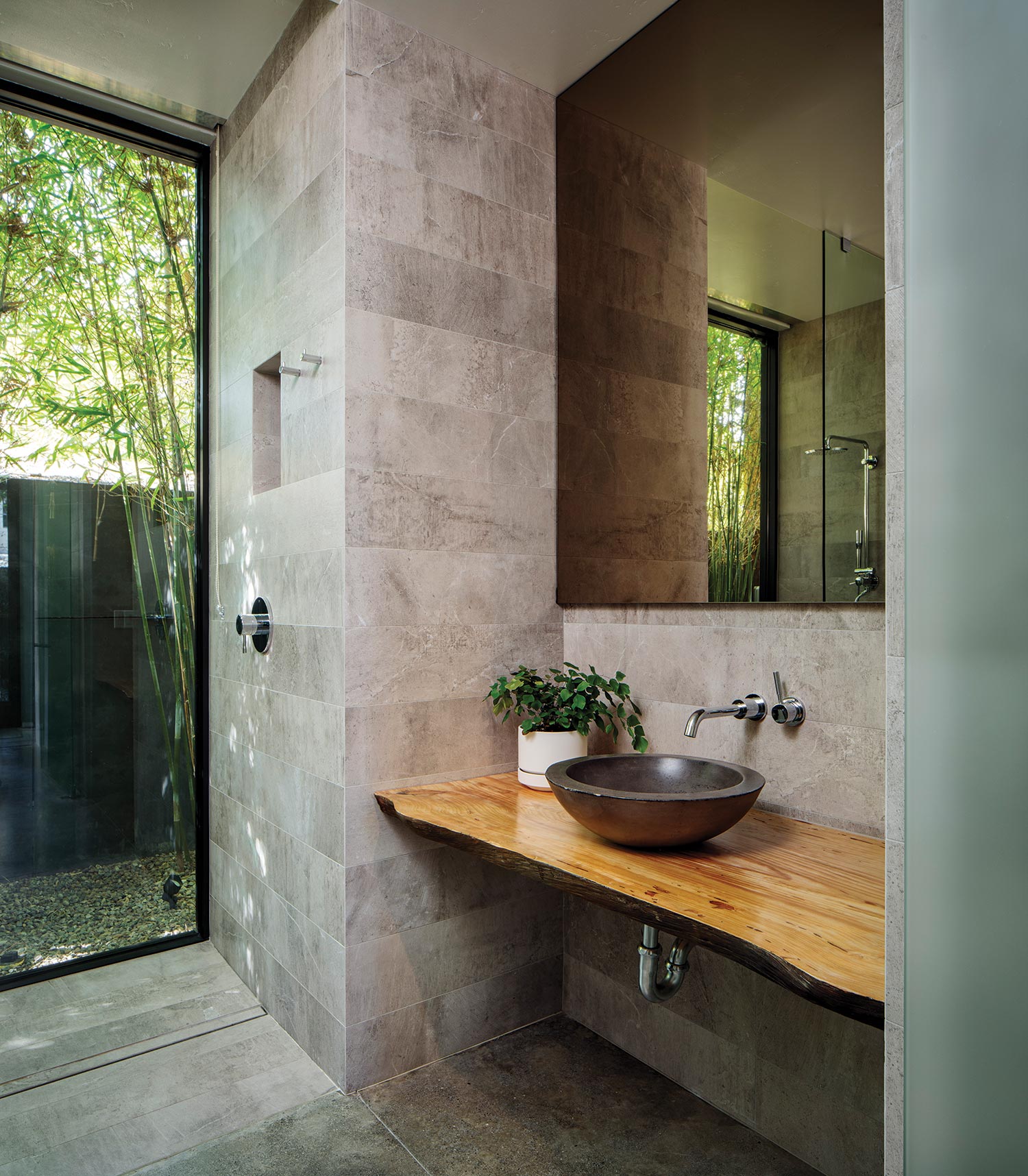 The guest bathroom features a Torrey pine countertop. A floor-to-ceiling window next to tall bamboo stalks lends an “in-the-forest” feel to the shower experience.

When Allan’s family comes to visit, they stay in the downstairs home office that converts into a bedroom. Some of the furniture here, along with most of the rest of the home’s furniture, comes from Allan’s Danish dad’s Copenhagen Imports store, so when his dad and stepmom come to stay, they feel right at home. So do Allan’s sister and brother-in-law. Not only is his interior designer sister (who, along with Annette Thornquest, helped the couple with styling) familiar with the furnishings, both she and her husband know all the tile and engineered wood flooring intimately, too. Those products came from their shop in Portland, Oregon.

Besides the guest sleeping quarters, all overnight visitors fall in love with the guest bathroom where the shower’s floor-to-ceiling window, facing tall, slender bamboo stalks, makes it seem as though they’ve traveled to a faraway exotic rainforest.

Upstairs, the master-bedroom suite impresses for a different reason: the extremeness of its simplicity. “There are no doors,” Allan says. “There’s not a full wall that separates the bathroom and bedroom.

Our bathroom is open to our shower and it also goes right into the closet, which makes it easy to get dressed in the morning. We like open space and there is no closing off. It all feels like one large space.”

Sage’s room is one large space as well but, thinking ahead during the design stage in case another little one should come along, Dominique fashioned sliding floor-to-ceiling opaque glass doors that, when closed, divide the area in half to convert the one enormous space into two large bedrooms. The fanciest space in the house, Sage’s bedroom shows off an adoration for all things pink (chairs, bedding and wallpaper carry the bright hue); her ballerina hopes (the room has its own wall-mounted ballet barre); a penchant for make-believe (a gazebo-like tent filled with stuffed animals and fantasies stands in the room’s center); and a joy of reading (a special cozy nook was built just for that purpose). Under her loft bed, which she calls her “bird’s nest,” an open space holds a round table and chairs where she can piece puzzles together or play board games. As delicious as her room is, Sage rates her outdoor patio as her number one go-to spot.

“Sage loves to climb,” her mother explains. “Dom helped us install a rock-climbing wall on her deck.” And if she’s not rock climbing, you might find her swinging from the monkey bars, also set up for her in this area.

Above it all, the much-protested rooftop terrace adds more possibilities for entertaining, lounging and enjoying ocean views. The panorama also includes a perfect field of vision for high-school football games. In another seven to 10 years, perhaps the family will watch Sage cheerlead the team to victory from their aerie.

“I believe that I could get all the people that signed that petition to say, ‘I shouldn’t have signed it,’” Dominique says. “This home is so cool—it’s so tastefully done.” 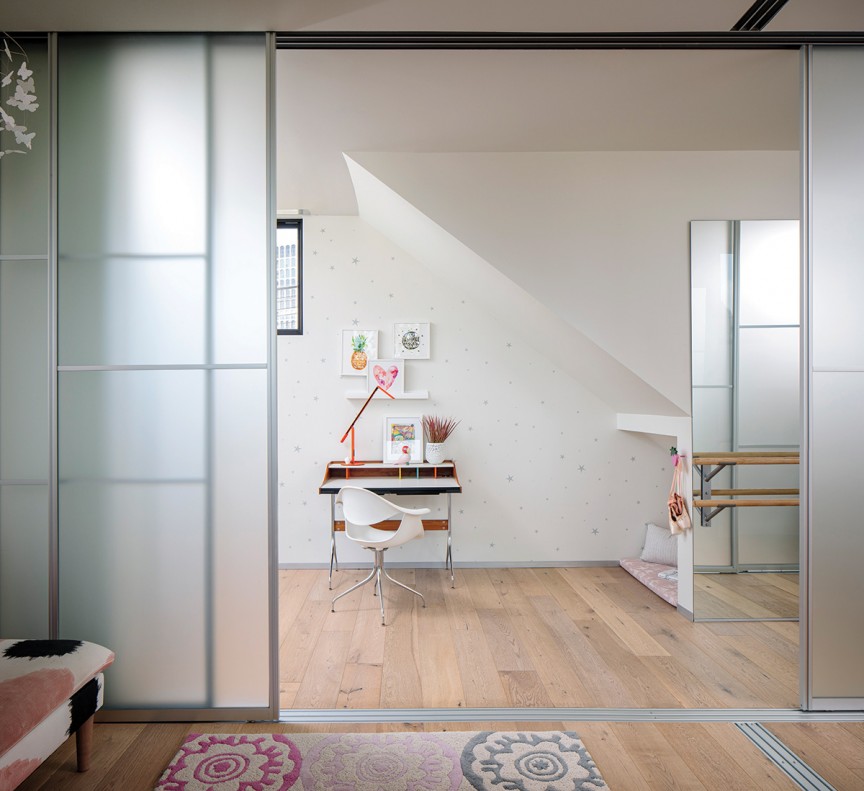