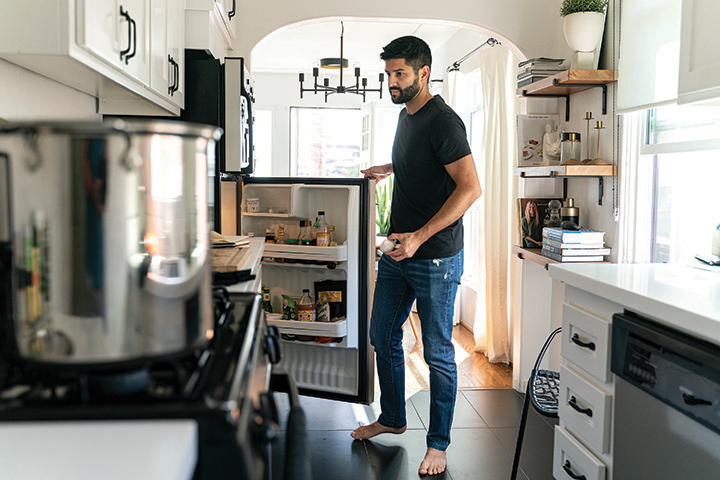 Sach Kirpalani has fond memories of watching his father cook. An immigrant from India, his father would spend Sundays prepping a week’s worth of meals for their family of five—two working parents with three kids who would come home from school hungry for a second lunch before soccer practice. They lived in Poway, but his father showed him that a world of cuisine existed beyond their middle-class suburb. 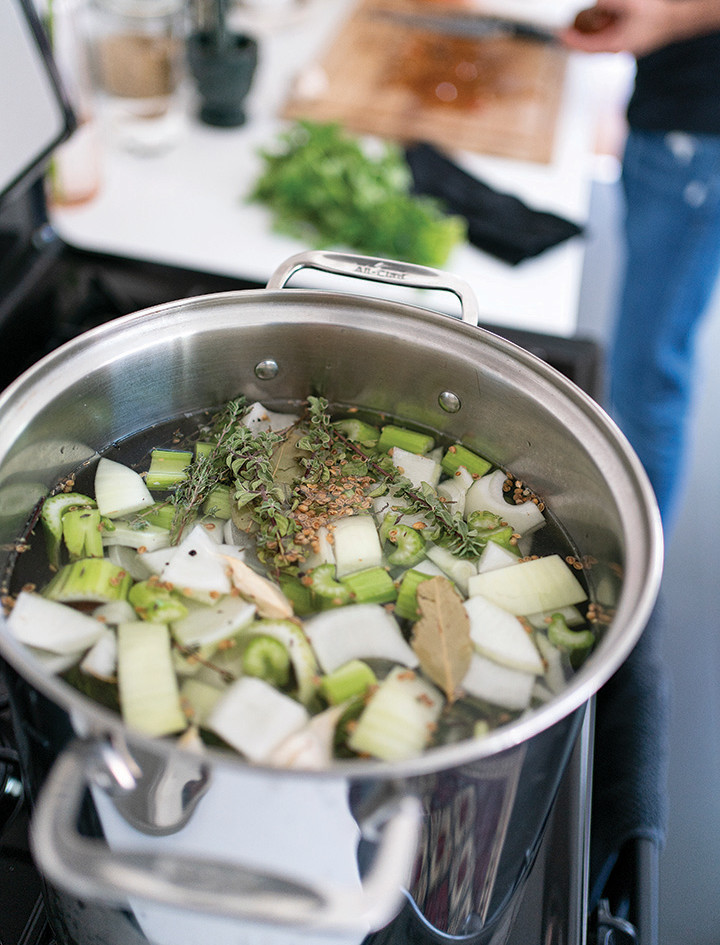 Sach lets his bone broth simmer on the stove for 6-8 hours.

“I remember my dad making us banana flambé because it reminded him of a trip to Spain,” Sach says. “We’d all be sitting on the kitchen island countertop watching him flambé and we’d be mesmerized.”

These days, Sach and his wife Leah are busy professionals who sometimes don’t get home for dinner before 7:30 p.m. Sach is senior vice president of investment sales for Jones Lang LaSalle’s capital markets group in the UTC office; Leah is the proprietor of clean beauty and wellness boutiques Shop Good in North Park and Carmel Valley.

Much like his father, Sach does some of his meal prep on the weekends, usually making an array of sauces that will go over vegetables one night and leftovers the next.

“It means we can make a meal in 20 minutes vers

He has always enjoyed cooking but took a more holistic approach to food several years ago when Leah started experiencing health problems.

“We looked at what she was eating with fresh eyes and noticed she wasn’t eating a nutritious diet. It challenged me to come up with recipes that would thread the needle—healthy, clean meals that wouldn’t further inflame the digestive tract,” he says. “It was one of the pieces of bringing her back to a healthy state.”

Sach developed meals based on northern India family recipes, places the couple has traveled including Greece, Italy and New York, and the lighter California-style cuisine that has fewer ingredients and less sauce and oil. He favors savory dishes flavored with curry, chili pepper, cumin and cardamom.

Before he knew it, he had enough recipes for a book. So, with his wife’s encouragement, he’s compiling a cookbook that he’ll hopefully publish sometime this year, but first he has to figure out the title, the number of recipes and whether he’ll self-publish or seek out a traditional book publisher. 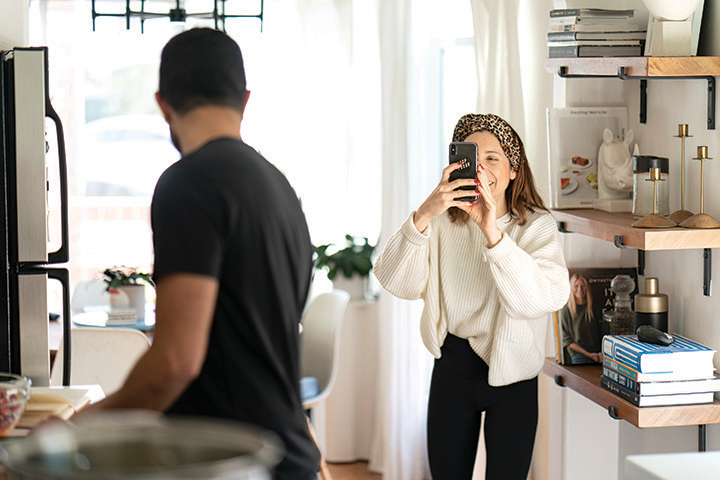 Sach Kirpalani poses for his wife Leah during the shoot so she can share the behind-the-scenes images in her Instagram stories.

What he knows for certain is that the book will feature a flavorful selection of food that’s big on natural, healthy ingredients. His favorite dishes include lots of vegetables, some meat, rice, sauces and chicken-bone broth.

“It’s an experimental book,” he explains. “It will reflect the way we eat, which is Californian in nature but borrows from cultures and influences where we’ve 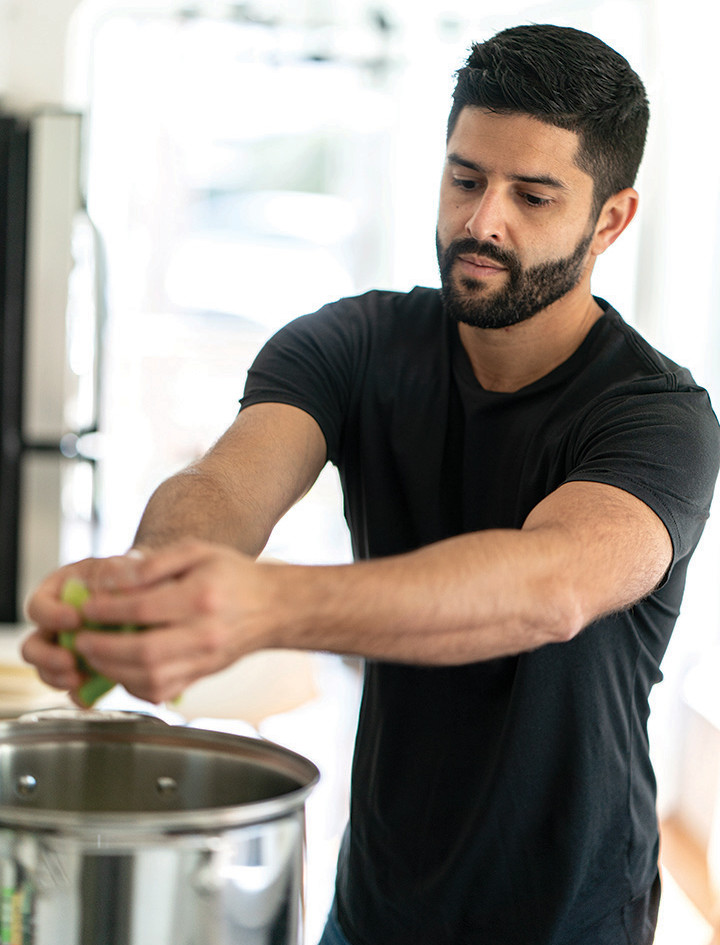 Sach says cooking is a creative departure from his workday of advising commercial real estate investors in the acquisition and disposition of million-dollar assets.

“It’s important to have hobbies and things outside of your day job because stress is a very real thing in adult life,” he says. “It’s a different way of thinking about things. If you can create a space to be creative, that passion should create an environment where you excel in a different way.”

He doesn’t like to get stuck in a mindset where he only thinks about work. Even the diversion of trying a new spice in a new dish is enough to help him unwind.

“I think that no matter who you are or what you do for a career to put food on the table, it’s important to find outlets to let your creativity shine,” Sach says. “It’s important that we not forget the imagination piece.” 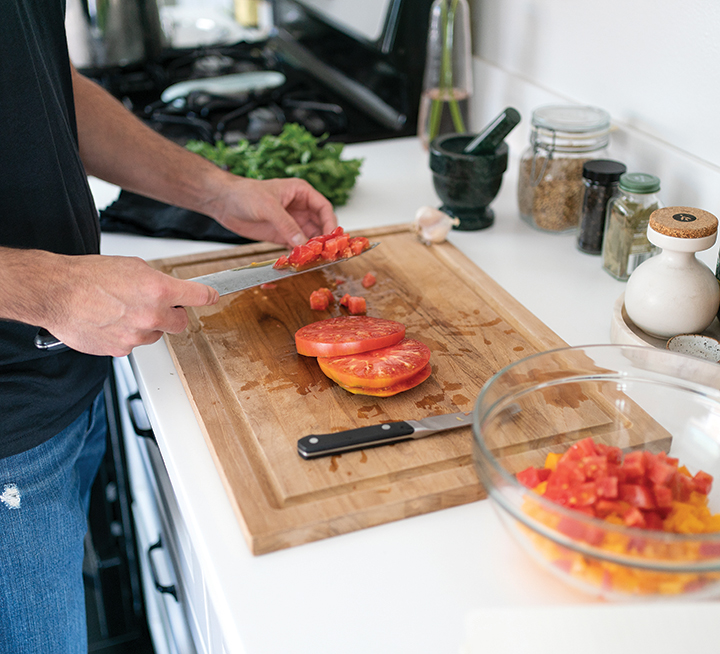 3 heirloom tomatoes, diced
1 jalapeno, de-seeded and diced
1 serrano, de-seeded and diced (for more heat, add some or all of the seeds)
1/2 red onion, thinly diced
1/2 bunch cilantro, chopped
1 tsp. salt, more to taste if needed
1 lime, juiced
Combine all ingredients in a bowl and mix thoroughly.