A leader fosters change with beer 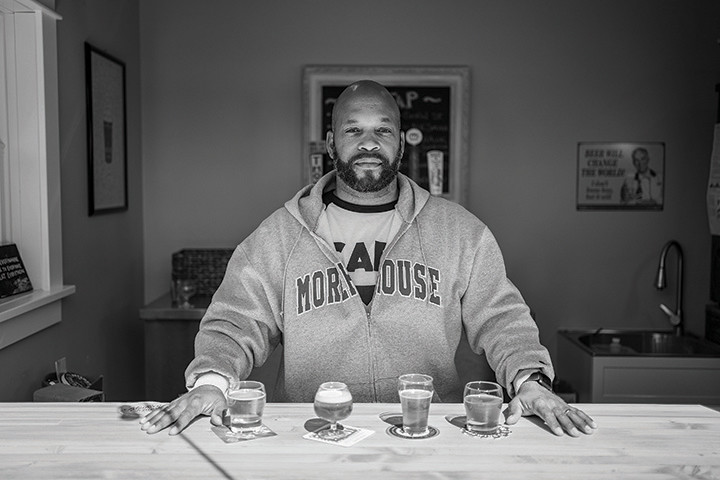 Omar Passons fills taster glasses with a swig each of Thorn Brewing Co.’s Barrio Baja-style lager; Xevioso, a Belgian Dubbel from Thunderhawk Alements; and Blueberry Tart kombucha from Bambucha Kombucha—all locally crafted here in San Diego. They are part of the six-tap collection he currently has in his craft-beer room, dubbed The Laundry Room, in his North Park backyard. To be fair, the room does house the washer and dryer, but it’s become an extension of Omar’s passion for craft beer.

A lifetime San Diegan who grew up in the city’s foster care system, Omar is the director of integrative services in the county’s health and human services agency and spends his days ensuring that San Diego County’s health, housing and social services operate together. Outside the office, he has served the North Park neighborhood as a board member—even president—of the North Park Community Association and been on the boards of the San Diego Workforce Partnership, the CDC Small Business Finance and the Earl B. Gilliam Bar Foundation (he was a land-use lawyer before taking the job with the county).

Clearly a busy guy, Omar also spends a decent amount of time tweeting and talking about craft beer and the whole San Diego craft-beer scene. That’s because in recent-ish years, he’s cleverly discovered a way to convert his own afterhours passion for good, local craft beer into making real changes in community engagement.
It all started with an idea a couple of years ago: Invite people to a bar and host a debate to cover real issues. “When people come together over a pint, it’s like the ideal mixture to start discussions that feel like a conversation,” Omar explains.
Partnering with Greg Koch, cofounder of Stone Brewing Co., Omar invited people to the first event, where Greg served as moderator, to discuss the great stadium debate. “These craft-beer debates, as we termed them, made it easier for people to participate in an educational debate because it all felt more like having a beer with friends rather than a political debate.” 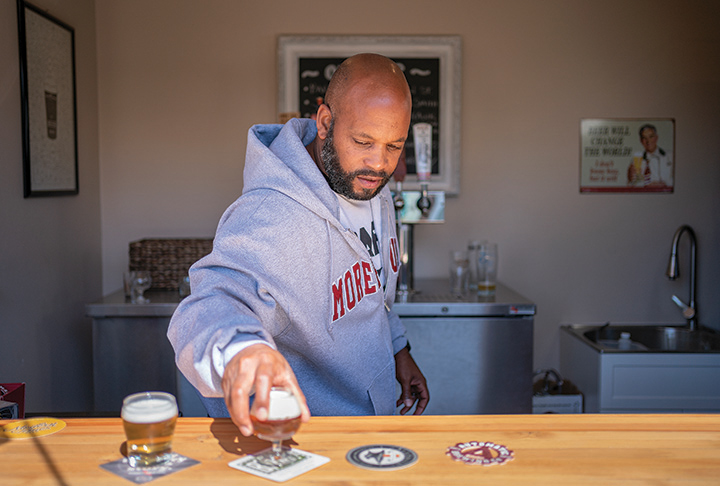 Omar Passons sets out his tasters filled with samples of the current local, independent brews he has on tap in his home beer room, called The Laundry Room.

“I took my passion, combined it with technology, with social media and some open-mindedness…”

Then Omar and others like him—politically engaged craft-beer lovers—banded together and set their sights higher. “We thought, ‘What if we give everyone who cares about civic issues a place to debate?’” Collectively, they started Pints and Pols (#pintsandpols) on social media platforms like Twitter.
Omar continued to cover topics that typically divide people—like increasing the minimum wage—with San Diegans from all different backgrounds. “We simply moved the conversation to a more engaged space, and we had great dialogue,” he says. 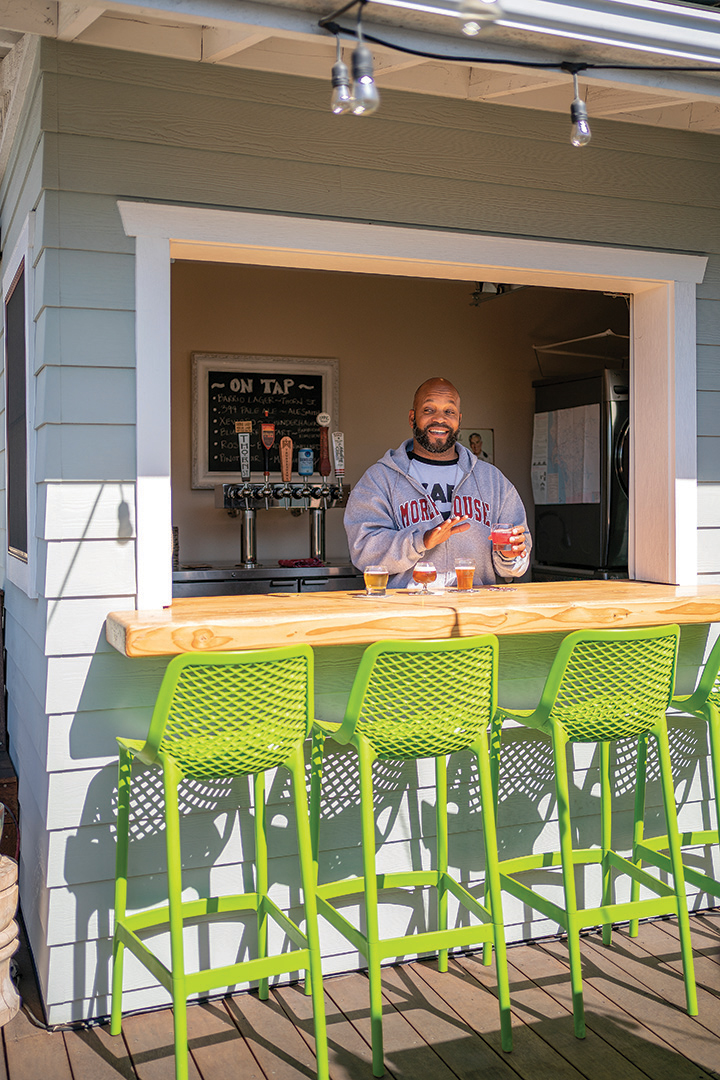 He partnered with individuals in San Diego’s craft-beer scene, who were already active in bettering the community. “I took my passion, combined it with technology, with social media and some open-mindedness and created a safe space for people to have a conversation and then potentially do something with that conversation,” he says. And it’s continued with and without Omar’s involvement. “There’s a large collection of folks who call for #pintsandpols on Twitter, and they materialize,” he adds. (Reach Omar on Twitter @omarpassons.)
Back on tap at home, Omar didn’t want to make craft beer a DIY hobby. “I home brewed badly,” he admits. “And I’m no cicerone, but on a scale of novice to beer judge, I’m north of the midpoint.”

He curates his revolving six taps with great care—sometimes trying something new, often having a well-established brew available, too. His criteria is simple: Beverages have to be local and independent. And until recently, they no longer all have to be beers as evidenced by the current rosé and kombucha offerings.
“People tell me they try a beer here for the first time,” Omar says. “I introduce people to some of the smaller San Diego breweries. I do it for the love of craft beer.”

He’s happy to host a few friends at his bar under the rolling garage or more on the deck just beyond The Laundry Room. In fact, he hosted a fundraiser for the Sunburst Youth Housing Project, a 23-unit affordable, supportive housing development downtown for young adults ages 18-24, with a special focus on the LGBTQ+ and HIV-positive youth community. He didn’t sell the beer but asked attendees for donations, all of which went to help the homeless LGBTQ+ San Diego community.

He says he hopes to do more entertaining in his own space—some for fundraising and some for fun. “I have truly turned my passion for craft beer into progress for my community,” he says, “and I’m really proud of that.”