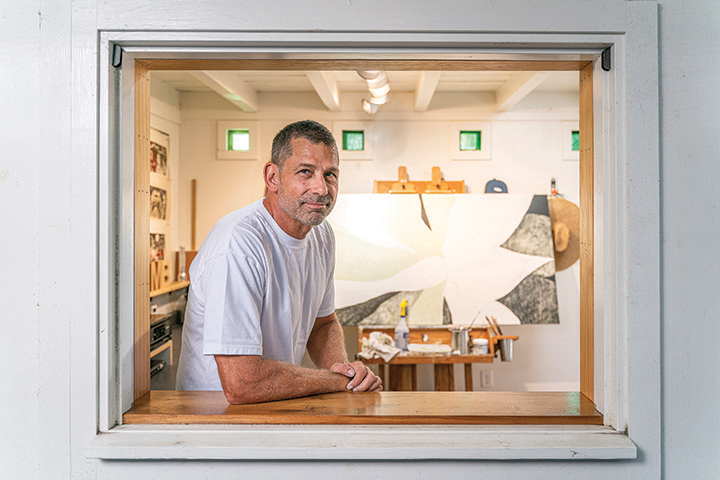 Mitch Brean in his home studio, where he creates his fine art paintings with a variety of different-sized paintbrushes

For 35 years, Mitch Brean has been beautifying homes and public spaces one planter at a time. As founder and director of design and product development at Stone Yard Inc. he has overseen the creation of a vast lineup of cast-stone design elements, including not just planters but mantels, pedestals, tables and fire bowls. Stone Yard products have been key in 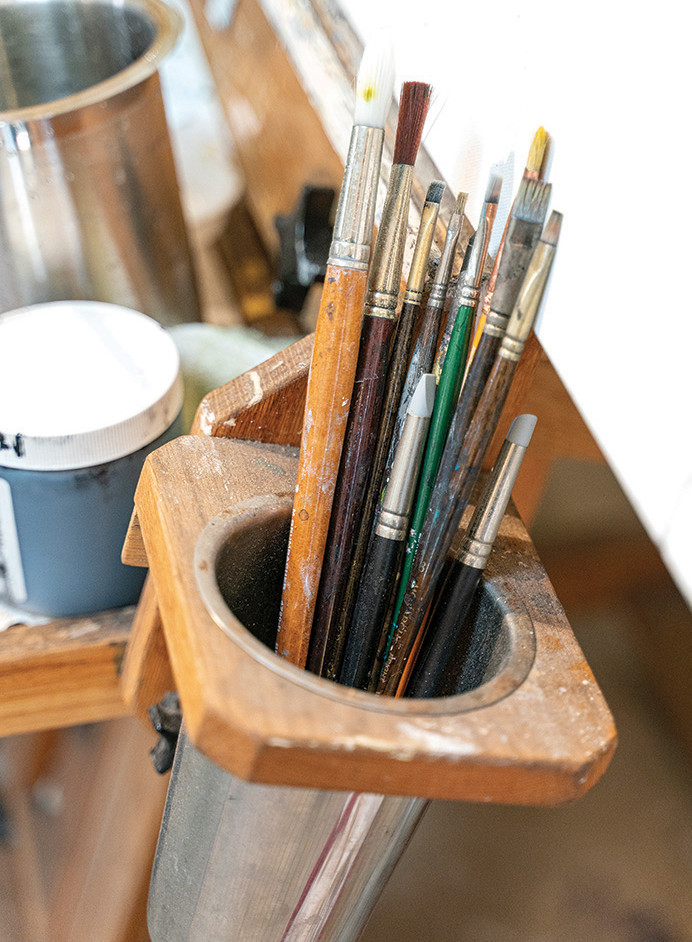 gredients in luxury projects from Chicago to Aspen to Rancho Santa Fe, and Mitch has collaborated with designers like Roger Thomas, longtime tastemaker at Wynn Resorts, and North County’s Amy Meier, who has a signature line of geometric sculptures at Stone Yard. Since 2015, he has also worked with Restoration Hardware, developing planters and outdoor tables, including a collection that will be unveiled this spring.

It’s all a path he’s been on since his youth, thanks to his father who had his own business developing molds for the aerospace industry. “I worked for him for quite a while,” Mitch says, “and at a very early age he taught me how to make a mold using plaster of paris. Having that knowledge of pattern and mold-making is really what lead to the start of Stone Yard.”

Mitch eventually added some science to his craft, developing a new material from which to make his pieces. “Originally we were making everything out of plaster, then we graduated to cement so it could go outdoors,” he says. “But then with my knowledge from working with my dad I knew a lot about resins and fiberglass so I figured out a way to duplicate the look of stone with super-lightweight fiberglass.” 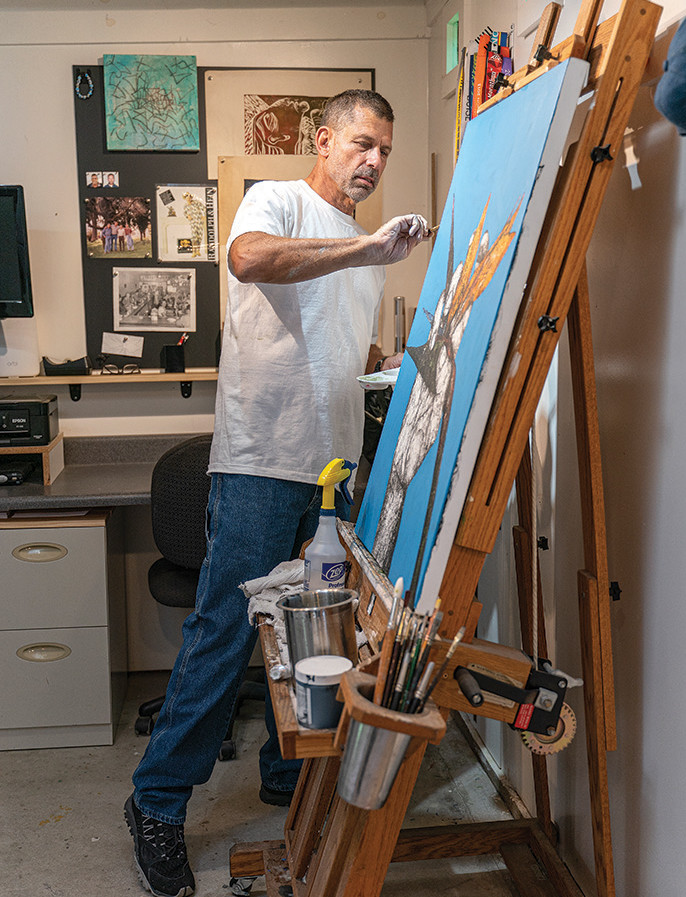 Unfortunately, he adds, he never patented it. “One of my regrets,” he says.
His father also passed along another talent, though: painting. “My dad was very artistic,” Mitch says. “He did paintings, sculpture; he did just about everything.”

Young Mitch was similarly inclined. “I’ve always been artsy from the time I was a little kid. I was obsessed with rearranging my room,” he says. And he was that kid in the back of the classroom, sketching. “I was terrible at math and reading but good at drawing,” he says.

He had little in the way of formal training and has not shown in galleries, noting the last time he was in an exhibition was at the San Diego County Fair—when he was 11. But inspired by artists such as Pablo Picasso, Salvador Dalí, Frida Kahlo, Robert Deyber and photographer Gian Paolo Barbieri, Mitch continues to hone his art, describing it as “a little surreal, a little abstract; I like anything geometric.” 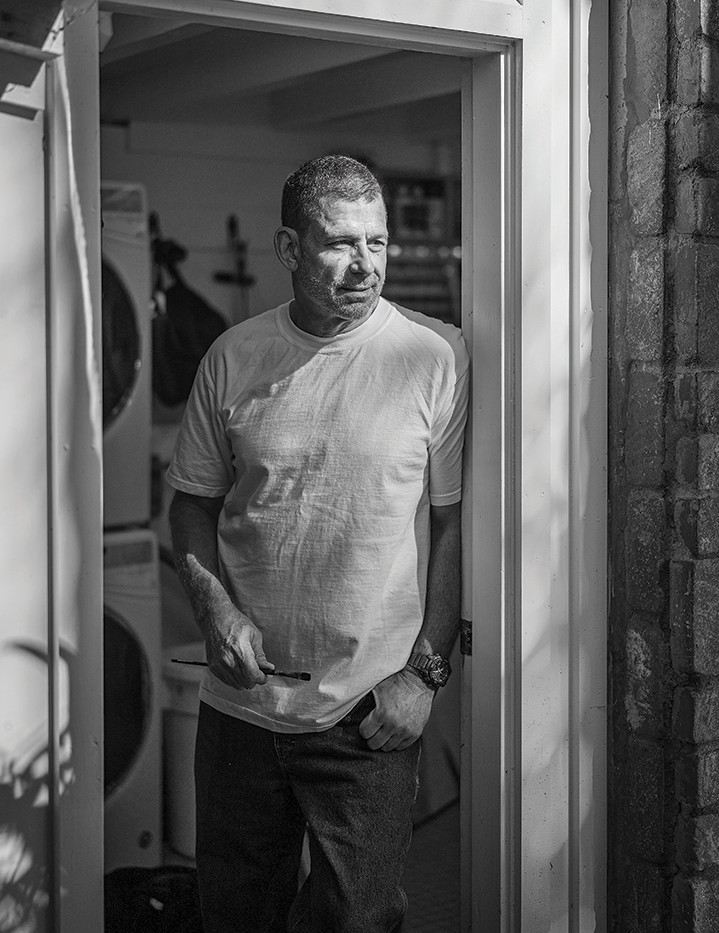 A key source of inspiration for both his art and his design is travel. He’s an inveterate traveler who has been to more than 60 countries, the more exotic the better. And it was while planning a trip to Africa that another chapter opened in his life: humanitarian. Wanting to go on a “trip with a purpose,” Mitch and his life partner Adan Chinchilla made inquiries with the embassy of Mozambique on a possible school or orphanage they could help. They were eventually connected with a village located five hours’ drive from the capital city of Maputo.

“I’ve always been artsy from the time I was a little kid. I was obsessed with rearranging my room.”

The couple held a party before they left, encouraging guests to bring school supplies for the kids. They received 300 pounds of backpacks, crayons, pencils and more.

“We drove up and every one of these school kids was out sitting under a tree waiting for us; they’d been waiting all day. It was just really something,” Mitch says. “They had this whole presentation for us and they fixed this very special lunch, so it was really heartwarming.”

“We promised we’d do something again so we just couldn’t let them down,” he says, so they followed up with another load of supplies the following year. Now the goal is to build the village a proper schoolhouse.

“What they really need are physical classrooms because right now they just have little shacks made out of branches. A lot of the teaching is done under a tree.”
And that’s just a little too surreal, even for Mitch.