These six talented San Diego pet artists may not know each other, but they have something special in common: giving hearts and a compassion for animals. Their gift to the world isn’t just their amazing ability to paint magnificently. It’s also their selflessness in helping to make life better for others. Here’s a look at some San Diego pet artists and animal lovers:

The first of our favorite San Diego pet artists, Kenda Francis says her goals are mighty. Through her art, she informs people about the plight of animals: those that are killed as trophies, for their teeth, horns, fur, tusks and fins; and those that suffer due to damaging environmental changes in our world. Spray-painting with hand-cut, multi-layered stencils over brushstrokes, paint drips, pen and pencil marks, her street-art style showcases the need animals have for our compassion. She donates a percentage of her proceeds to nonprofit animal welfare foundations. Find her mural painting at the seventh-floor rooftop dog park in The BLVD, a 165-apartment complex on the corner of El Cajon Boulevard and Florida Street in North Park. 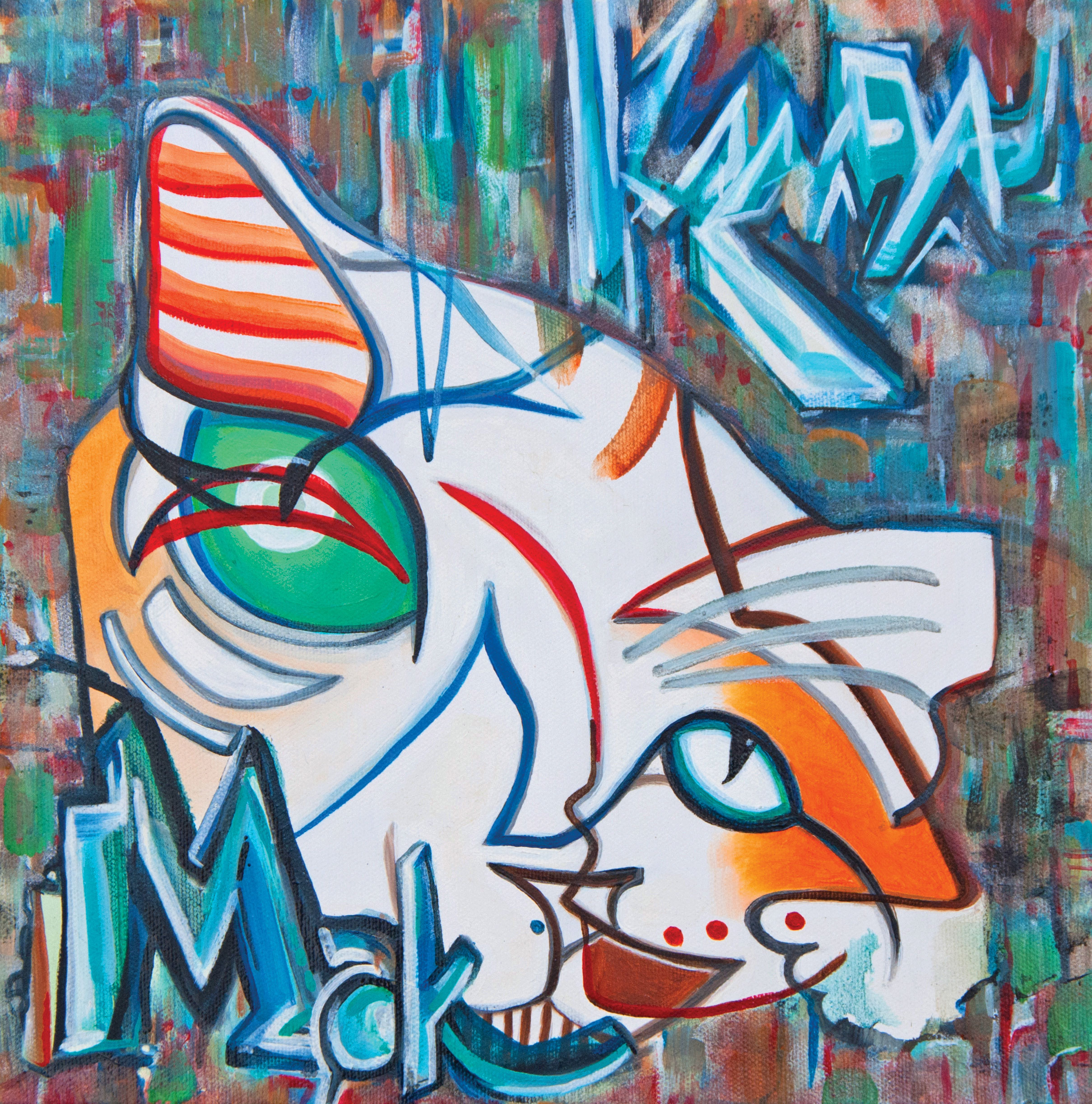 Specializing in large-scale murals, Celeste Byers’ hope is that her artwork will remind others of the magic and beauty of the universe and that it will help to bring more positivity into the world. In that vein, Celeste traveled to Roma Norte in Mexico City to paint an ode to Frida the Labrador, depicted in “Todos Son Importantes,” the dog that rescued 52 people trapped in the rubble of the 7.1 magnitude earthquake that hit central Mexico in September 2017. Celeste thought that painting a large-scale homage to Frida was the best way for her to bring back hope to the city. With more than 50 murals around the world, Celeste has been awarded a U.S. House of Representatives Certificate of Special Congressional Recognition, a California State Senate Certificate of Recognition and a City of San Diego Certificate of Recognition. 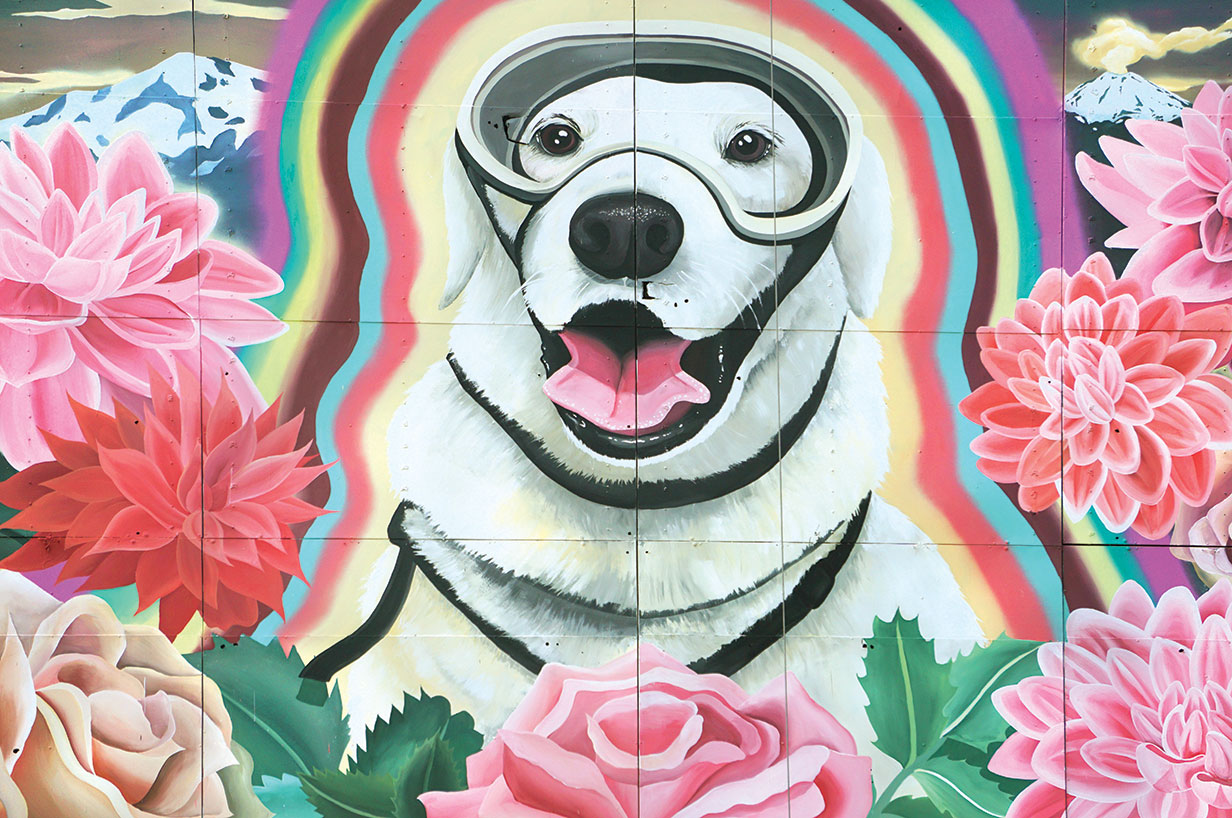 Award-winning and internationally collected artist Judith Jarcho specializes in vibrantly colored custom dog and cat portraits. Pet owners, including Jack O’Brien, the Tony-award winning director of Hairspray; author-publisher Louis Hay; and PBS host Matthew Margolis rave about her ability to translate their pets’ character onto canvas. Nothing gives Judith so much pleasure as immortalizing a pet for its owner. Her motto: “A portrait of your pet should be true to its spirit and the joy of its being.” 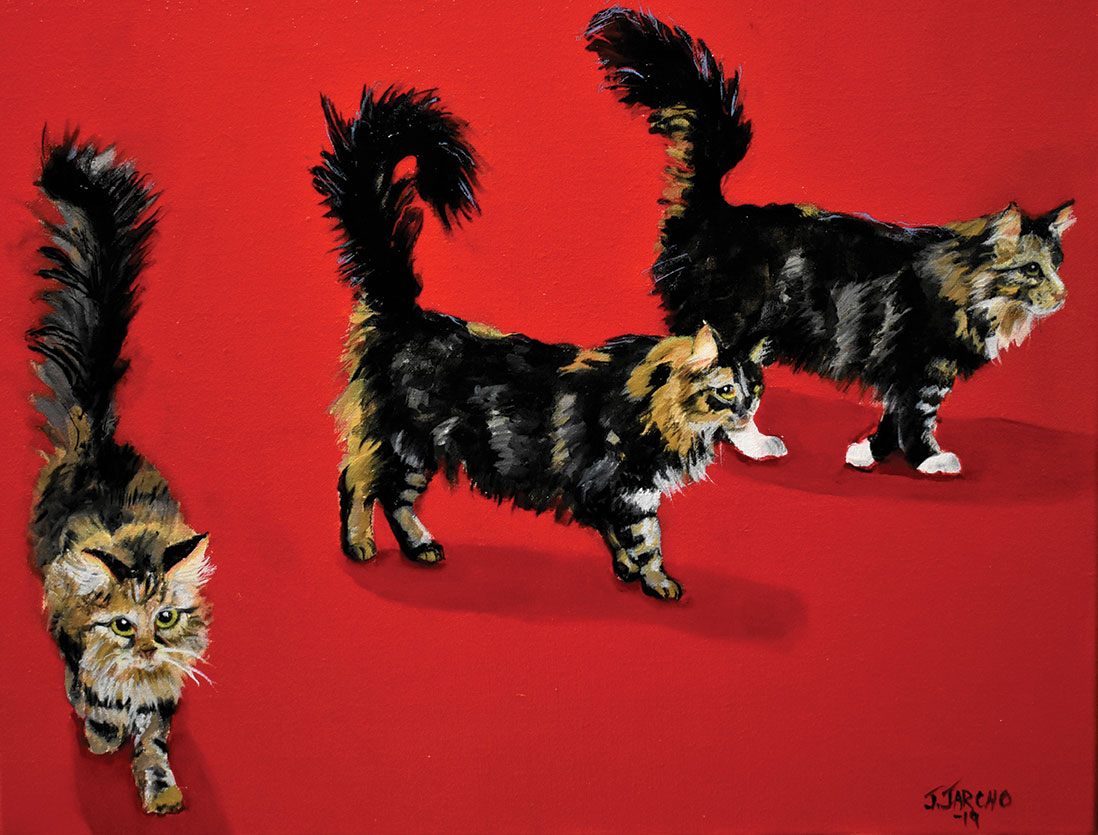 “High tail it to Breakfast” by Judith Jarcho.

Stephen Fishwick has received wide acclaim for his high-energy paintings and for his work as a performance artist. He has been licensed by the estates of Elvis Presley, Jimi Hendrix and Bob Marley to reproduce their images commercially and has been named a Disney fine artist, which allows him to paint Disney characters and display his work at Disney parks and galleries throughout the world. His client list includes such high-end companies as Microsoft, Apple and Coca-Cola but what makes Stephen most proud are his contributions—more than $1 million to different charities. Since 2007, he has traveled the world with his conservation-focused live art show, educating audiences about the plight of endangered species. Proceeds from his For Life Collection of fine art, which features endangered species and threatened animals, support Stephen’s wildlife conservation partners including the San Diego Zoo and the San Diego Humane Society. His studio is located in North County. 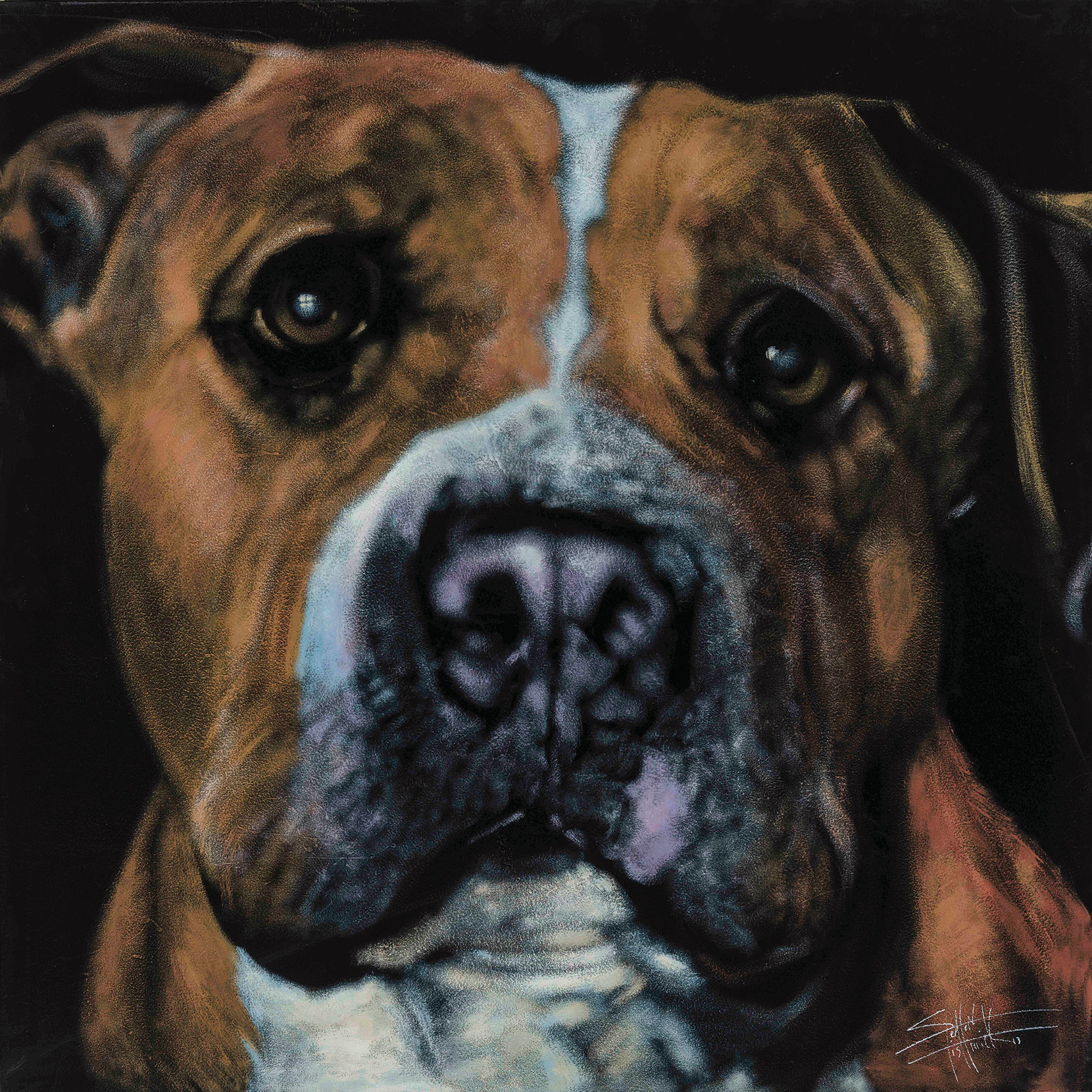 An ardent animal lover who follows the adage “paint what you love,” Cris Weatherby devotes much of her watercolor- and oil-painting time to creating commissioned portraits of dogs, cats or birds for pet owners. Cris makes time to meet the pet, take photographs and study the relationship between the pet and owner so that her paintings reflect the animal’s personality. As a comfort to grieving pet owners, she also creates memorial portraits of beloved, deceased pets. To capture the essence of a cherished, deceased pet, Cris listens as the pet’s owner shares stories that provide her with a sense of the pet’s personality. Cris has been the workshop director for the San Diego Watercolor Society and traveled the world as the owner of Flying Colors Art Workshops. She currently teaches semi-private workshops in her Encinitas studio. 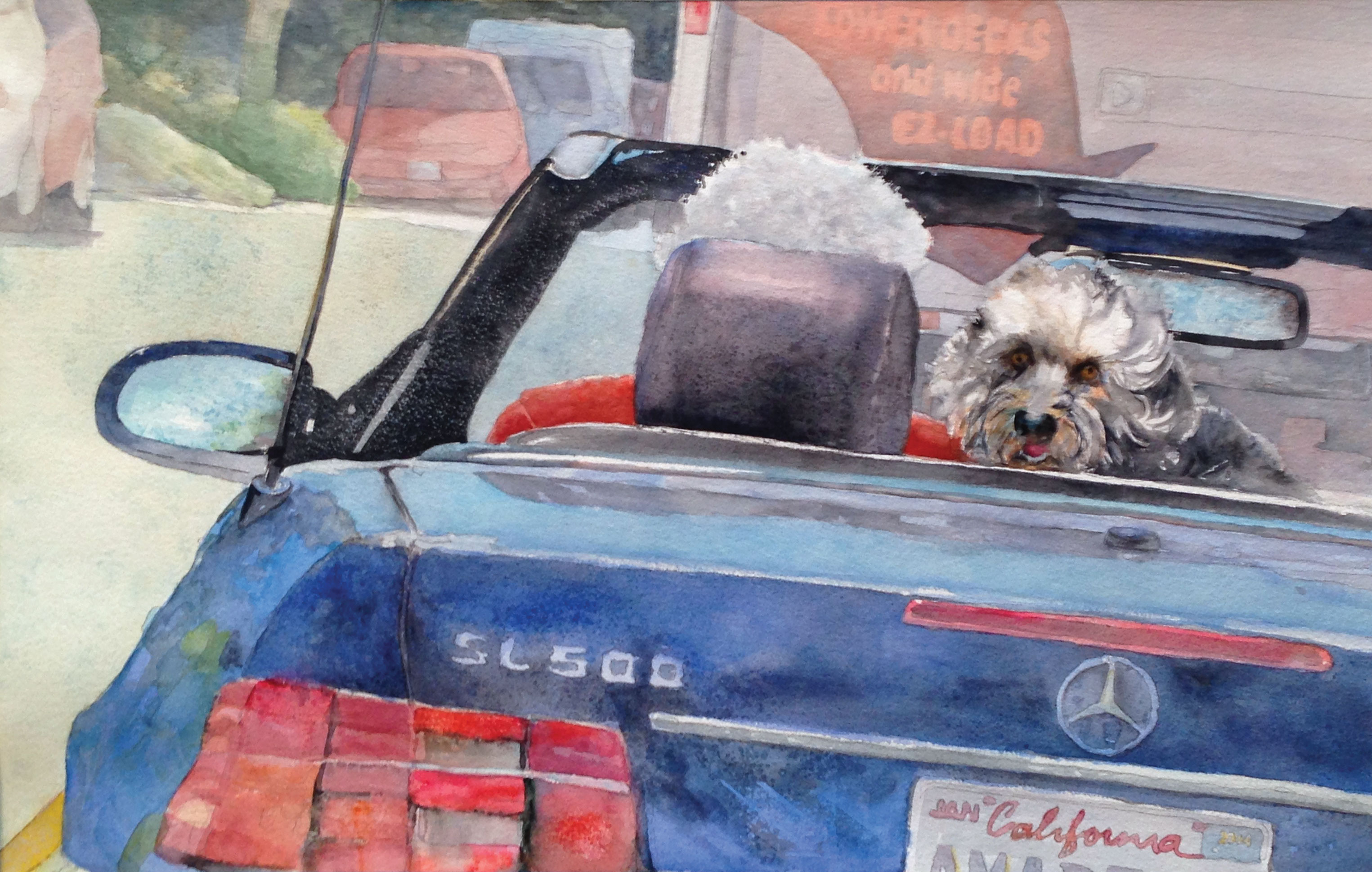 Despite adversity, Australian-born artist Concetta Antico kept on going. When she was 12 years old her mother passed away. Four years later, she was homeless with only pocket change. But with a dream and the recognition of beauty around her and in her, she didn’t give up. She made her way to Southern California and became a gifted visionary artist, color consultant and teacher. Known as The Color Queen because of her ability to see 100 times more color than a person with normal vision (a genetic mutation called tetrachromacy), Concetta paints hyper-colored oil on canvas pieces that document the beauty of our universe. She volunteers her time as a participant in ongoing color-perception studies at UC Irvine. 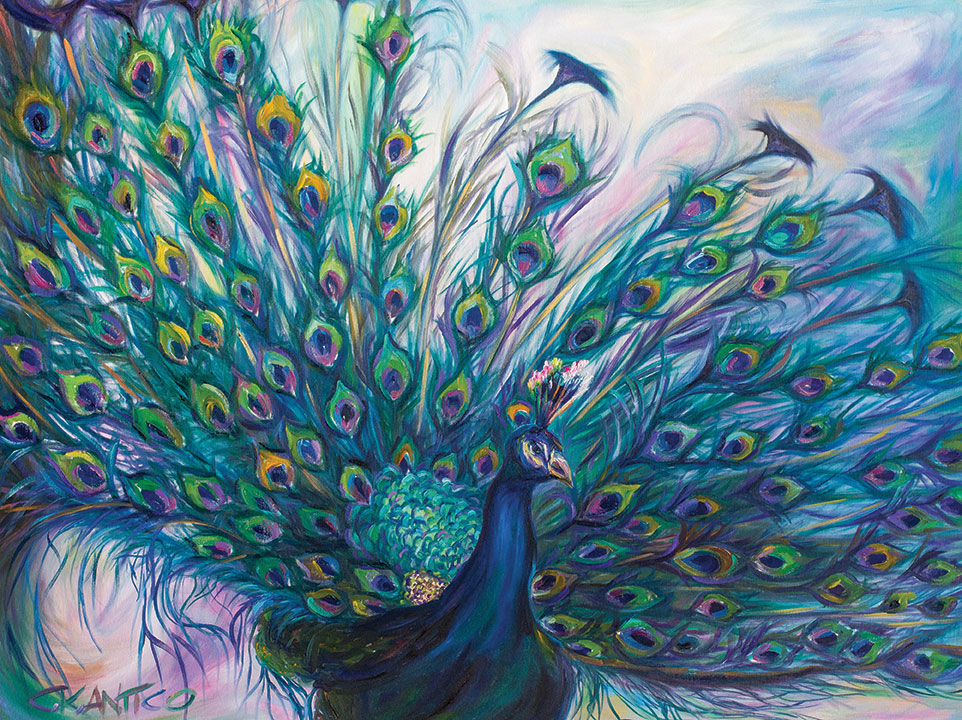