Meet the 1915 Panama-California Exposition Women’s Board

The social events—and the women behind them—that welcomed the U.S. Navy's Pacific Fleet to San Diego 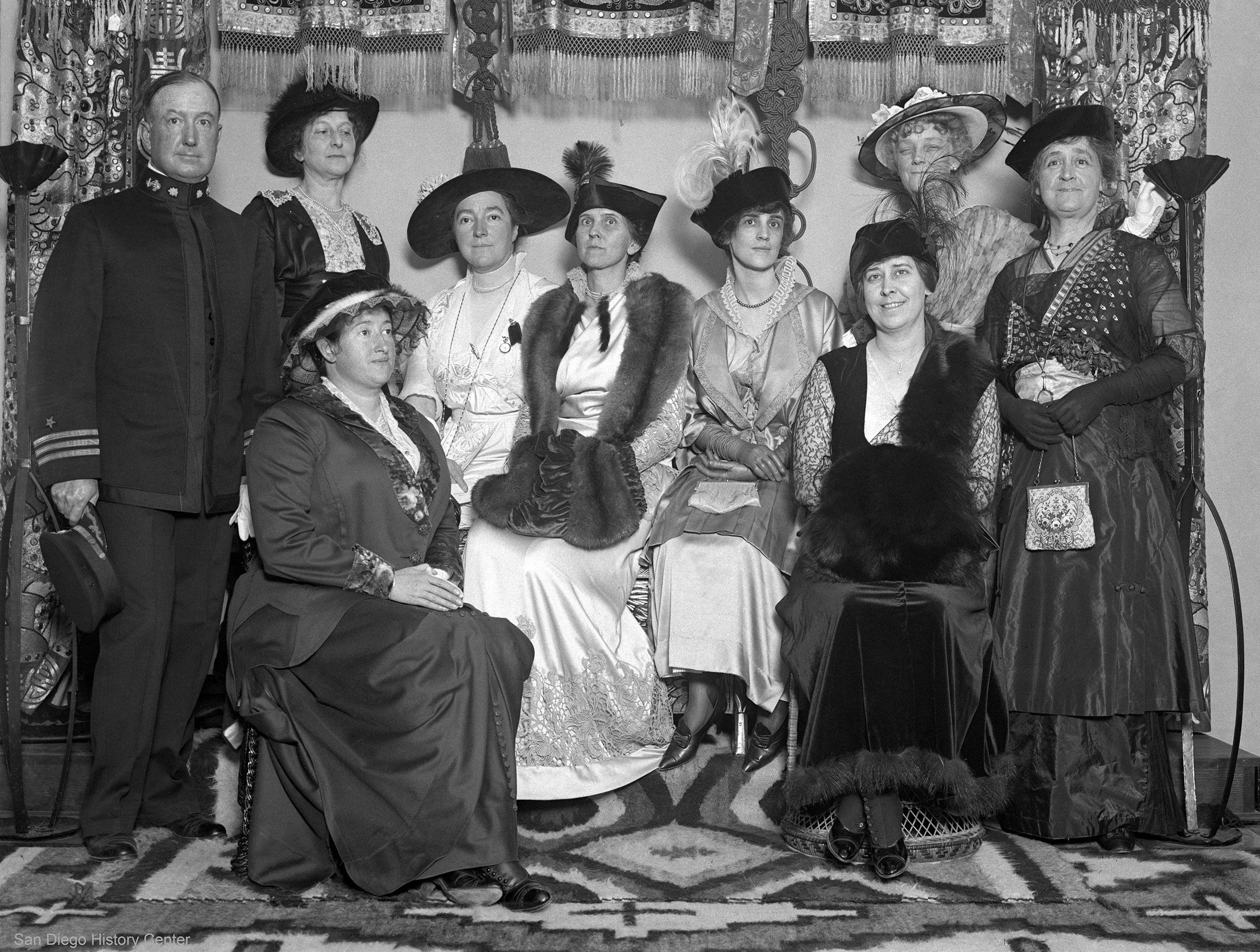 After more than six years of feverish planning, fundraising and construction, San Diego’s 1915 Panama-California Exposition in Balboa Park opened the New Year at midnight on Friday, Jan. 1, 1915. The most important social events during the exposition’s first week celebrated the U.S. Navy’s recent choice of San Diego as home port for most of its expanding Pacific Fleet.

Those plans had been publicly announced in April 1914, by undersecretary of the Navy, Franklin Delano Roosevelt after his inspection tour of the port, a thrilling development for local boosters that also promised additional events and excitement during the upcoming exposition. The midnight lighting of the exposition grounds was punctuated by cannon volleys and horn blasts from the armored cruiser USS San Diego and other newly resident U.S. Pacific Fleet ships that had just dropped anchor in the bay that afternoon, under the command of Rear Adm. Thomas B. Howard.

The photo seen here was taken on Monday, Jan. 4, during the exposition’s official reception for the officers and wives of the USS San Diego and hundreds of other Navy personnel and families who were joining the Army and Marine Corps companies already stationed here. After the speeches and parades in the exposition’s Plaza de Panama, the exposition women’s board hosted an afternoon social reception in the California Building (now the Museum of Man), in the “Persimmon Room,” their meeting and events space. The officer and ladies seen above are posed on a dais covered by Navajo rugs, against a backdrop of Chinese persimmon red silk-embroidered curtains, part of the decor designed for the room by Miss Alice Klauber, women’s board chair of the exposition’s fine arts gallery.

The officer standing at left is Cmdr. Cleland Davis (1869-1948), the Navy’s ranking shore-based officer in San Diego. In addition to his other duties, Davis was the officer in charge of land acquisition, design and construction of the Navy’s new radio station in Chollas Heights. Completed in 1917, the station provided a direct link between Pearl Harbor and Washington, and was the most powerful radio transmitter in North America until its closure in 1992.

Seen with Davis are some of the many women’s board officers and honorary event hostesses, who were all identified by their husbands’ names, to which their given names have been added here. In the back row from left: Mrs. Julius Wangenheim (née Laura Klauber), Mrs. Uriel Sebree (Anna), Mrs. Cleland Davis (Mabel), Mrs. Frank Belcher, Jr. (Virginia), Miss Alice Klauber, Mrs. George McKenzie (Elaine); seated: Mrs. Frank Von Tesmar (Alice), Mrs. Alex L. Verner (Rachel). Their 1915 Panama-California Exposition event duties didn’t end with this reception. Most were also among the organizers of the Navy Relief Society’s fundraising ball held in the U.S. Grant Hotel that same evening and attended by more than 1,000 guests.