Farm-to-Fork San Diego founder Trish Watlington shows us how to eat local in a 1.2 mile radius of downtown San Diego 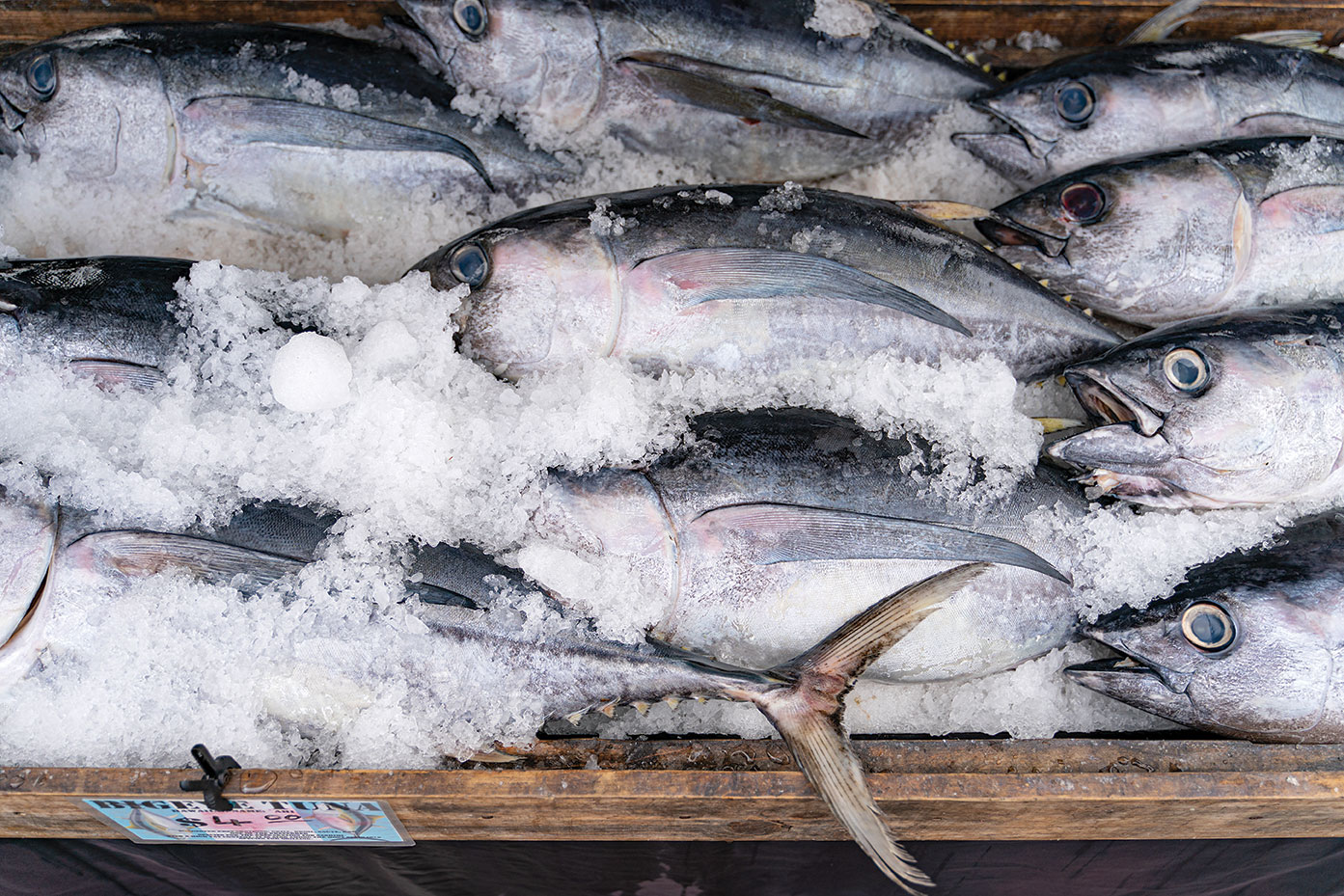 Around Town with Trish Watlington

Trish Watlington is working hard to shake up the local food scene. She runs Two Forks Farm, her half-acre Mount Helix organic garden that produces vegetables, fruits and edible flowers for a handful of restaurants around town. Her farm’s not new. Trish used its harvest at The Red Door, the restaurant she owned for many years in Mission Hills (she sold it last year). 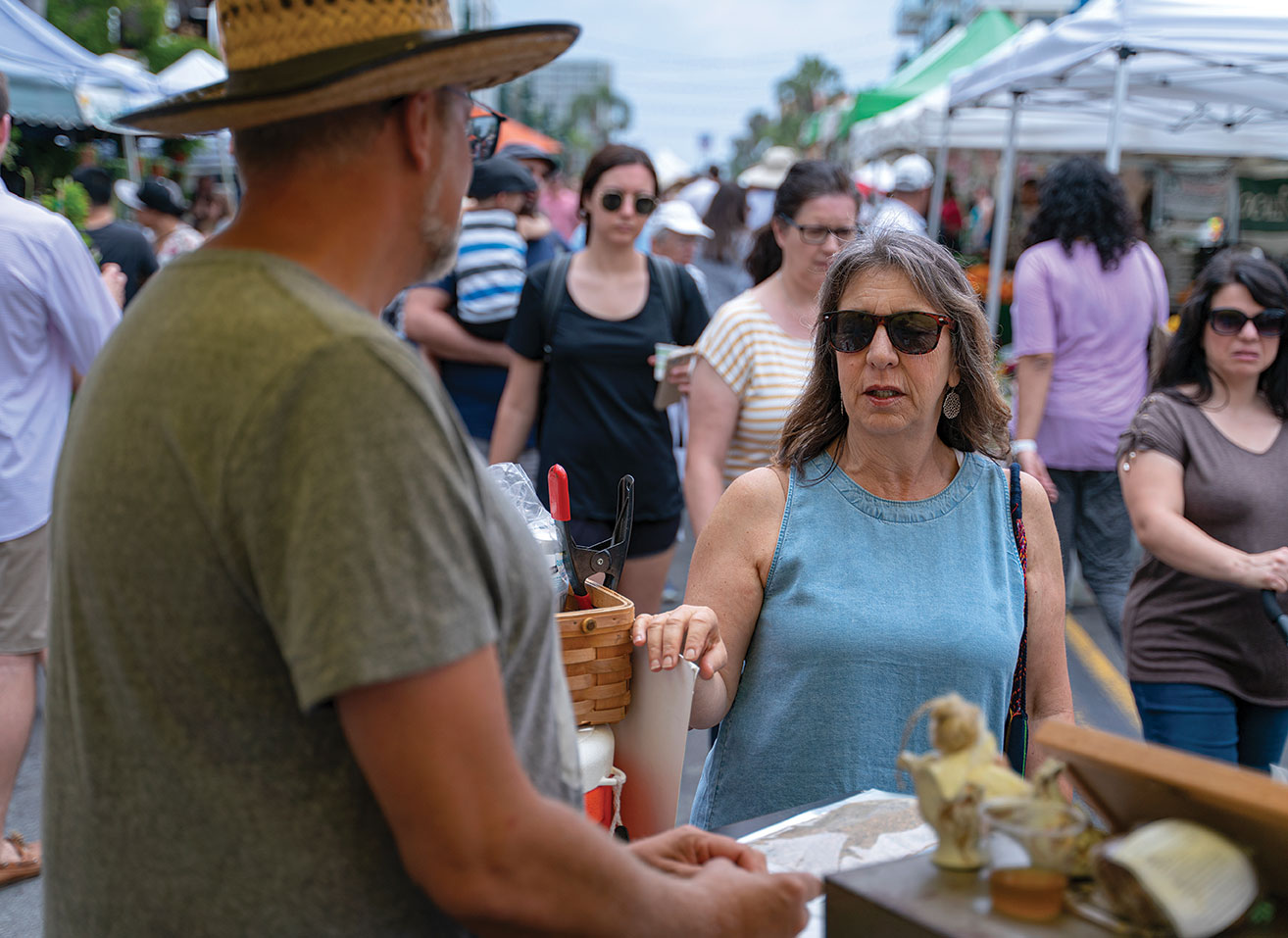 She also champions the farm-to-table movement in San Diego through Farm to Fork, the organization she founded more than three years ago. The membership-based group comprises fishermen as well as restaurants, markets, farms, wineries, cideries, breweries, nonprofits and businesses that strive to support a fairer, more sustainable local food system by providing a verification process for true farm-to-table restaurants, meaning the restaurant gets weekly or biweekly deliveries from at least one local farmer or fisherman. It’s her way of making eateries practice what they preach. So if you patronize a Farm to Fork establishment, you keep your food dollars here, help local families and their workers and reduce greenhouse emissions by lowering the number of miles food travels to the plate. 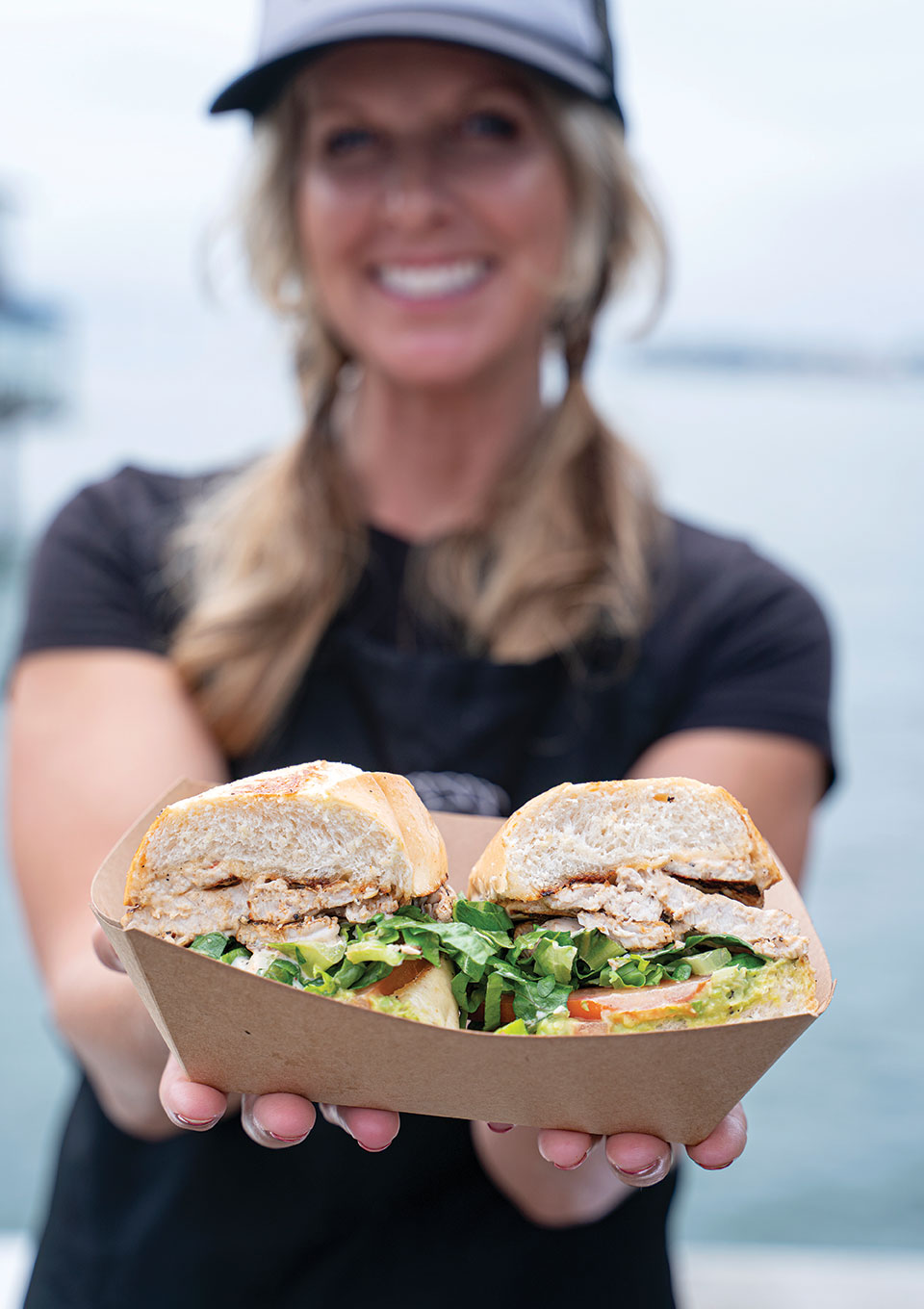 We joined Trish on a recent Saturday, stayed within a 1.2-mile radius of downtown San Diego and sampled everything from street food to fine-dining cuisine. Follow along, and if you replicate the day, bring your appetite, a cooler and a reusable shopper. 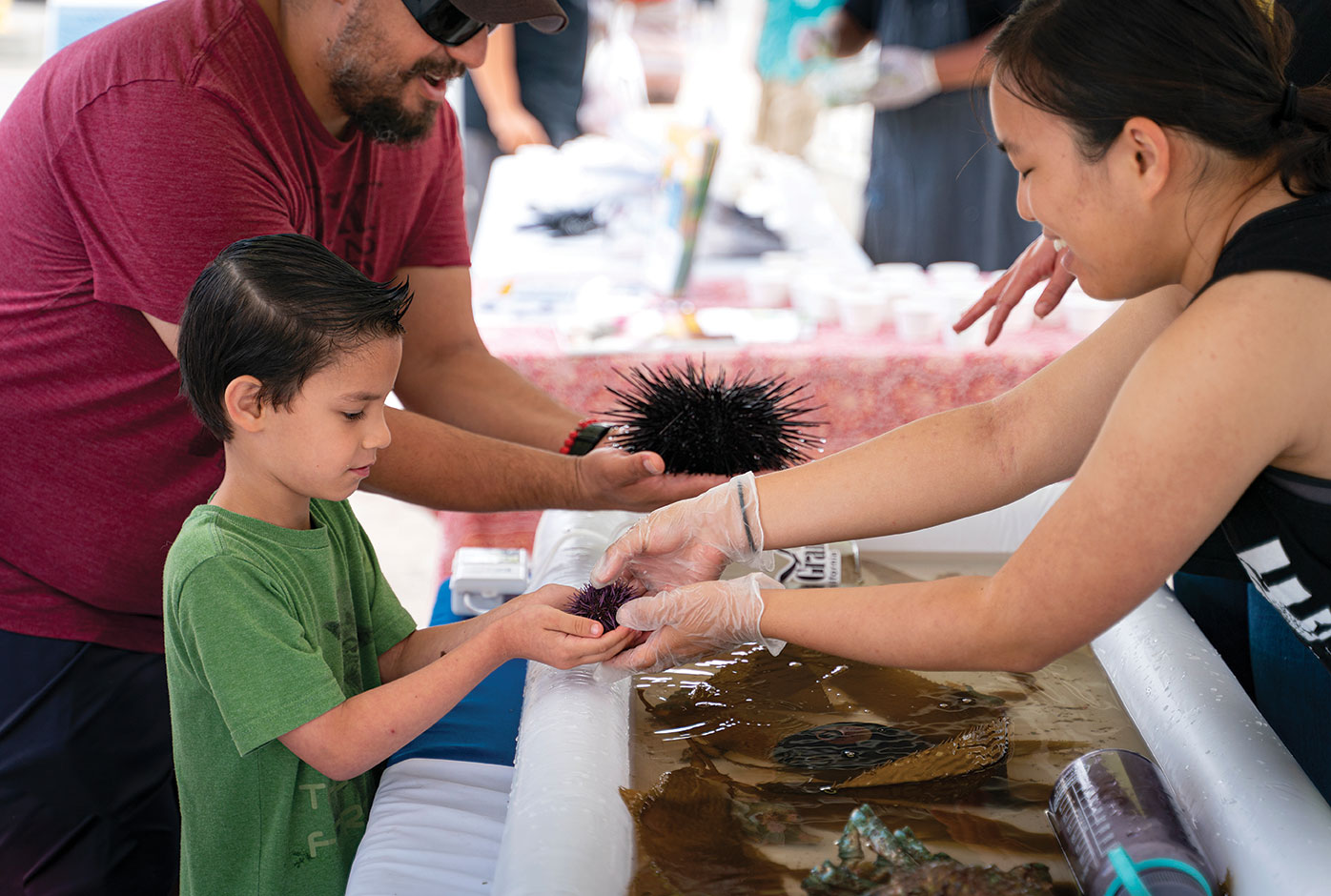 Trish starts most Saturdays at Tuna Harbor Dockside Market, an open-air seafood market near Seaport Village that longtime sea urchin fisherman Peter Halmay brought to San Diego five years ago. “Tourists would come here and ask where they could buy fresh seafood right off the boat,” Peter explains. “Such a place didn’t exist.” So he developed this direct-market presence between fisherman and consumer that Trish visits regularly. 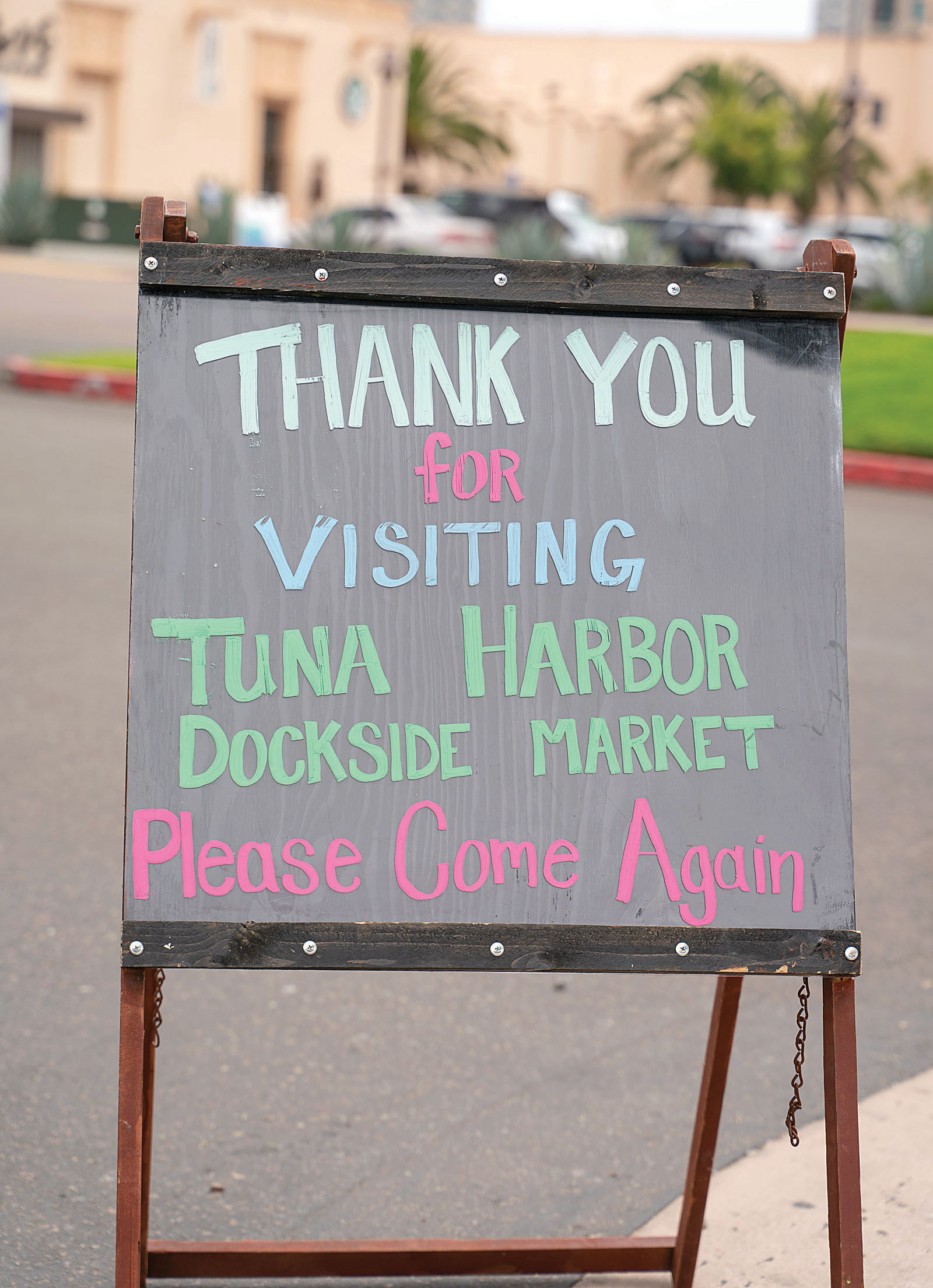 There are touch tanks for the kids, and vendors to clean and fillet your whole-fish purchase if you like, but Trish comes for whatever’s fresh. There’s a sign at the entrance that tells you what’s available that day. Maybe it’s bigeye tuna, skipjack, halibut or shrimp.

And she always stops for breakfast or lunch (depending on the time) at Jolene Fukushima’s Loaf & Fish, which serves tacos and sandwiches featuring the day’s freshest catches from the Three Boys vessel that Jolene’s husband Kelly operates with their three teenage sons. Today, Trish orders the mako shark sandwich to share with Gary and I. It’s grilled and served with tomato, lettuce and a lime wedge, and it’s deliciously messy. 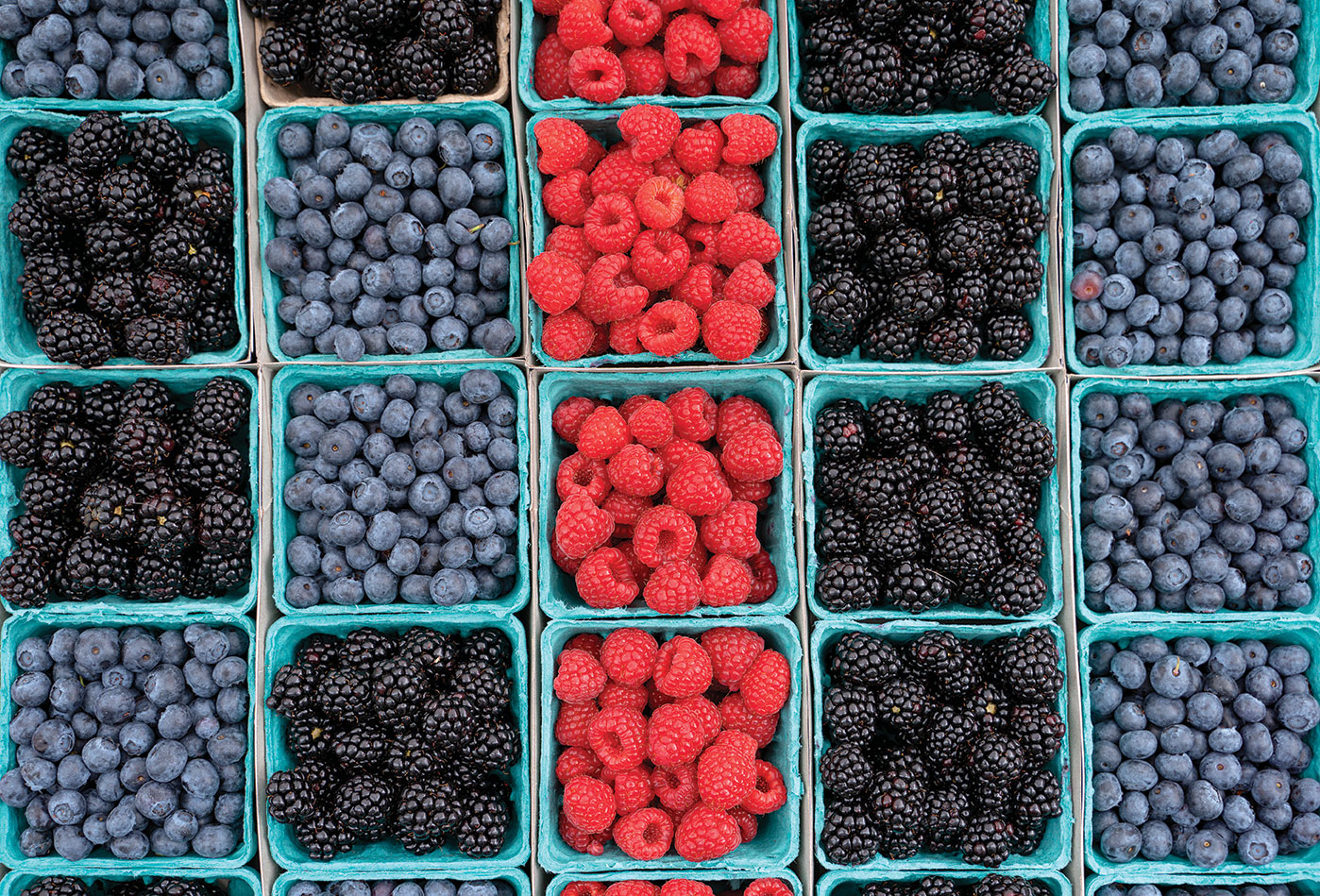 The Wednesday market in Little Italy is typically the one Trish hits because it’s way less crowded (Saturdays draw 20,000-25,000 people) and you don’t have to drive around for 30 minutes looking for a parking spot. You should plan to spend a couple of hours milling around the market if you come on a weekend, exploring the various booths and sampling their goods. Trish takes us to some of her favorites. 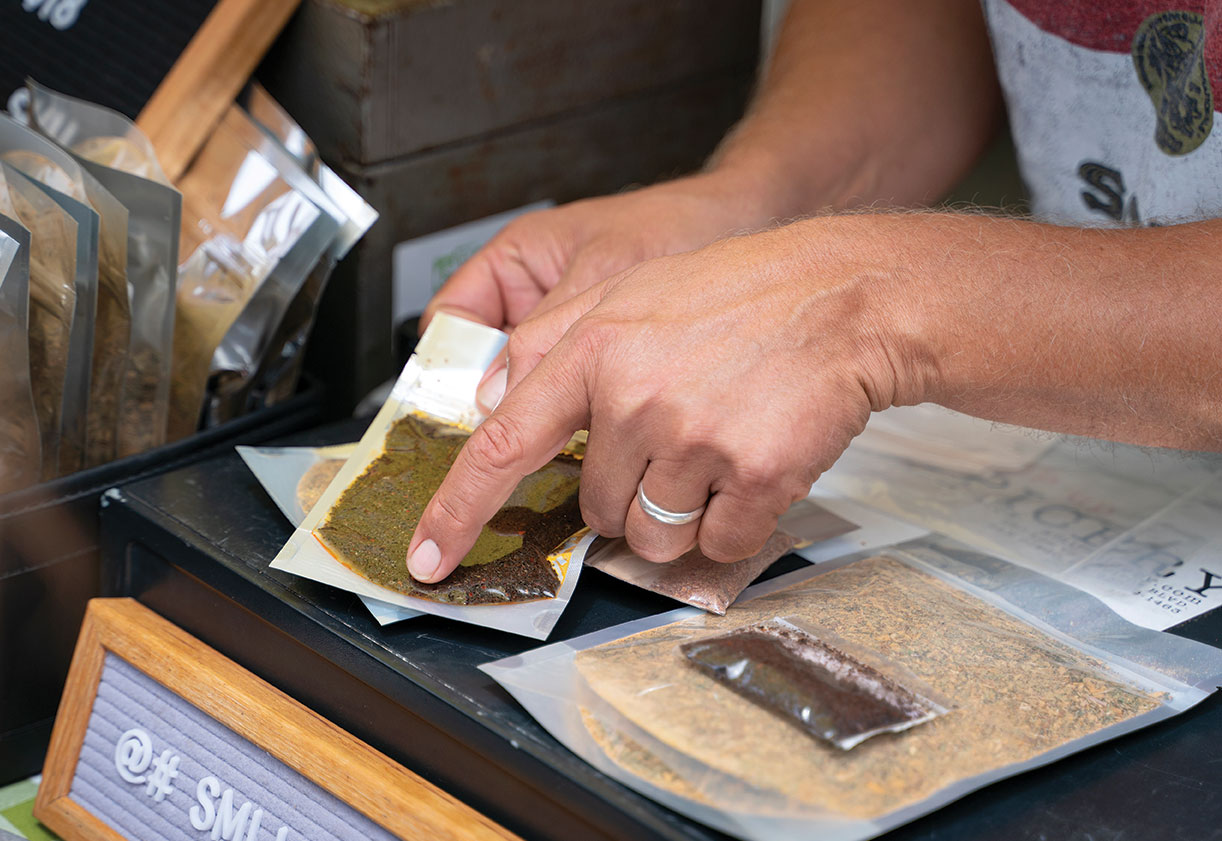 “Smij Spicery might be my favorite place on the planet,” she gushes of the booth selling their own custom blends of spices, herbs, salts, sugars, teas and goodies with which to rim your cocktail glass. Trish picks up the dark cocoa sugar. “I sprinkle this on top of my coffee ice cream,” she confesses. On the sample table today: A blend made for and named after one of Smij’s favorite customers. Tonique is a concoction of turmeric, ginger, cinnamon, red clover, burdock, yucca, nettle, fenugreek, pepper and flax that you can steep and serve hot or pour over ice, which is how they’re offering the refreshing elixir today. 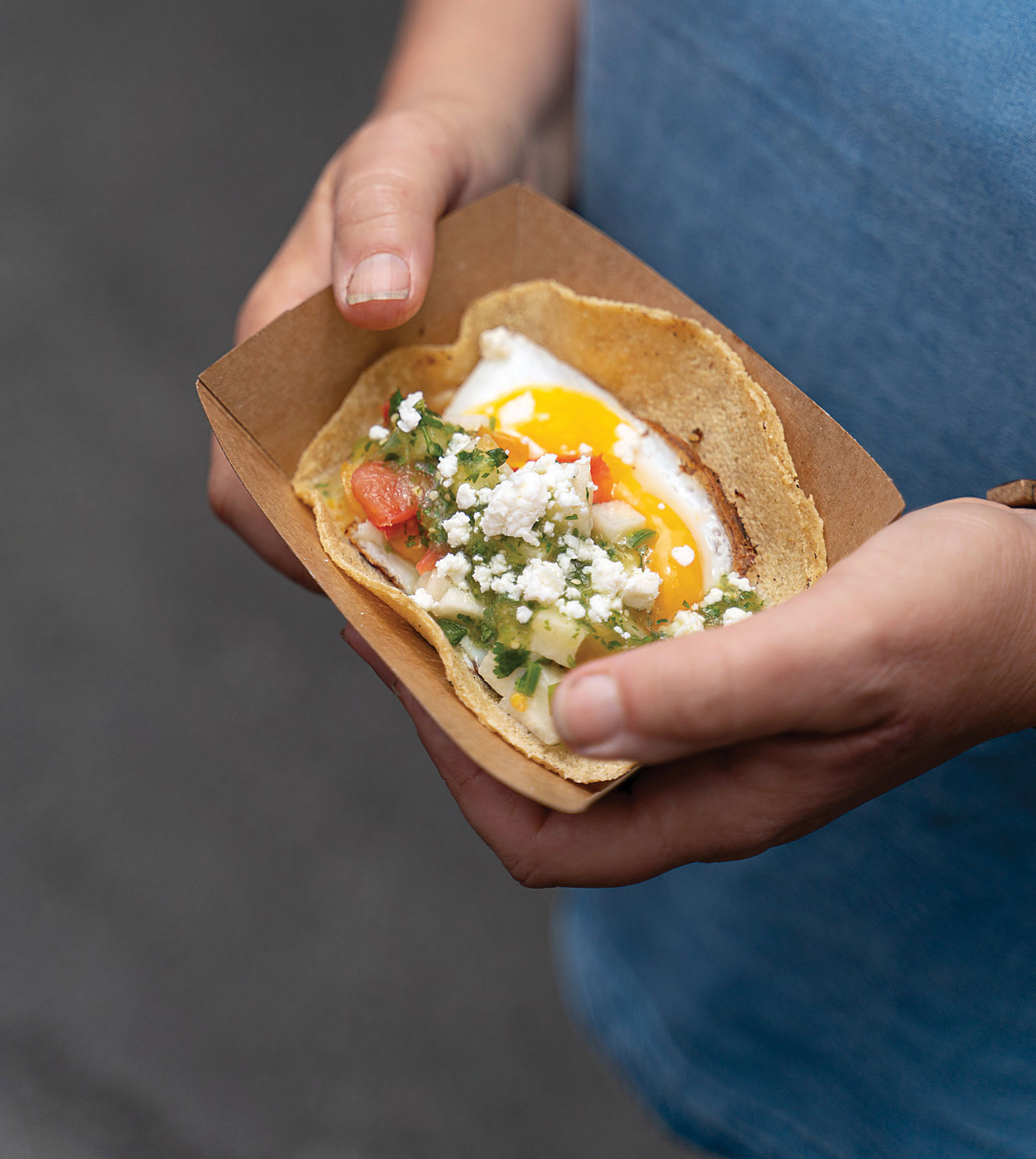 From there, Trish navigates the way to FaVe Tacos, where owner Elizabeth Cramer tends to her line of taco devotees who find her here on Saturdays and at the Hillcrest market on Sundays. Trish is a loyal fan, too. This is a regular stop for her around lunchtime.

She orders one of the breakfast tacos topped with a fresh egg from Three Sons Farms (not related to Three Boys) in Ramona, and she also gets a vegan mushroom taco, a year-round staple.

The mushrooms, dressed in an ancho pepper sauce, hail from Mountain Meadow Mushrooms in Escondido. 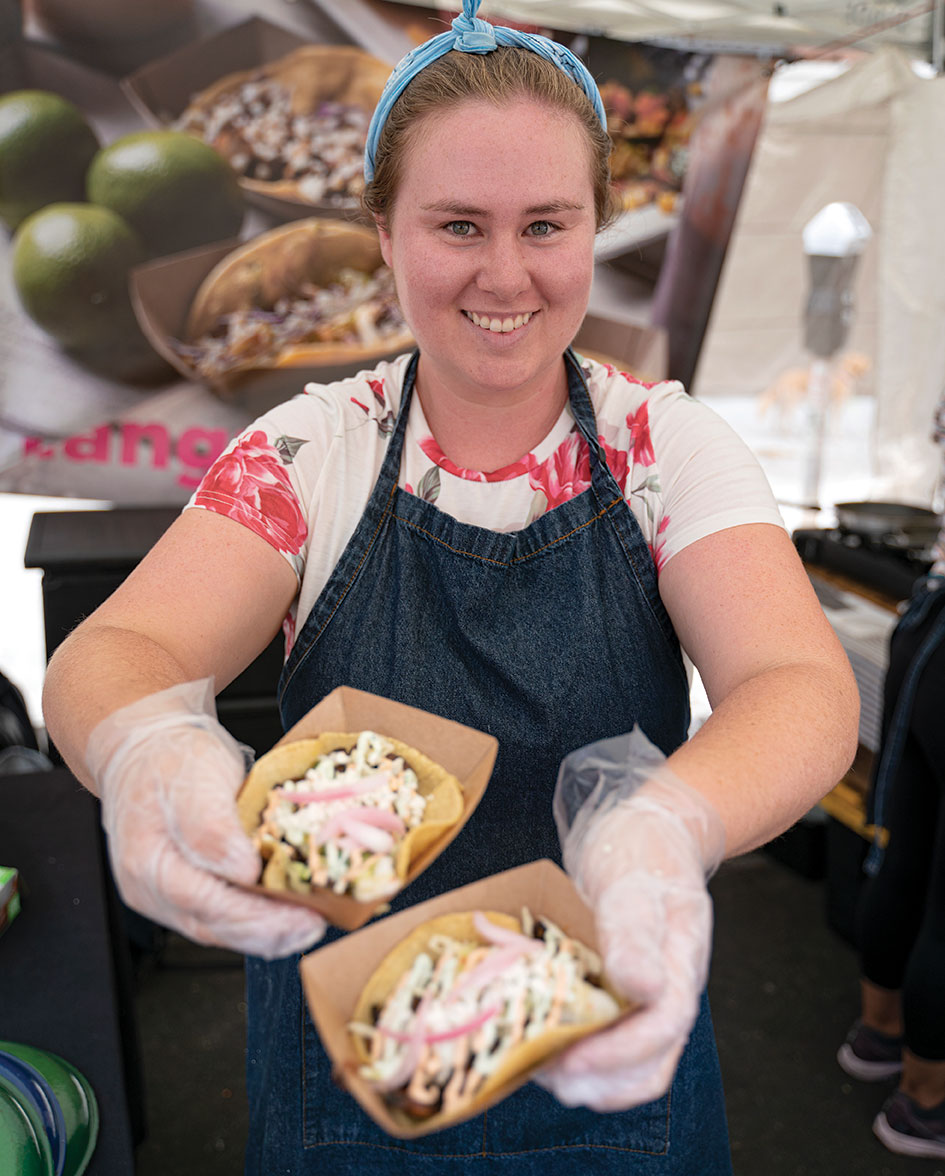 Elizabeth Cramer of FaVe tacos makes Trish’s suggestions for all of us to try—a breakfast taco and a vegan mushroom one, too. 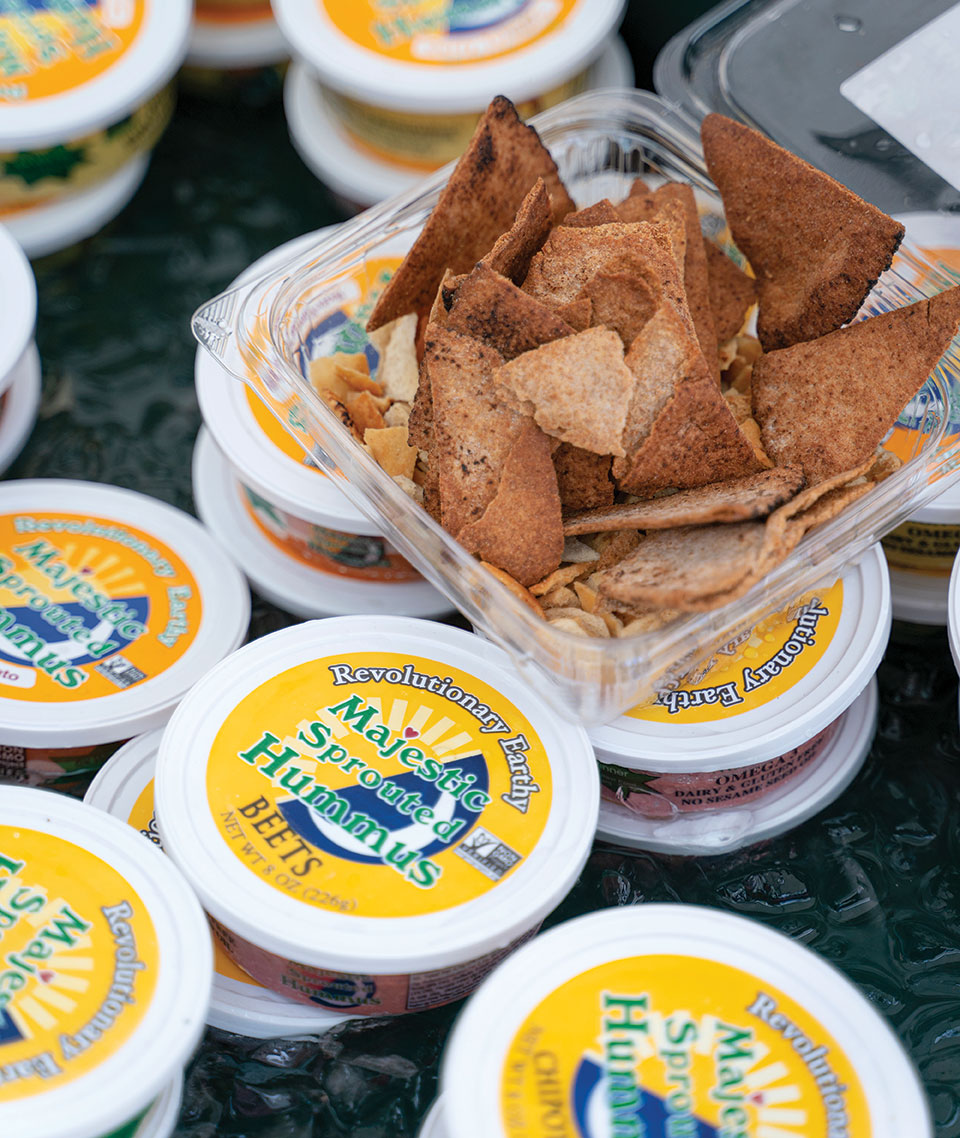 Majestic Sprouted Hummus, where there must be 47,000 different flavors, is the next booth we hit. This is where Trish buys her hummus because she prefers hers without tahini. She likes the original and olive, which sold out in the first hour this morning, we’re told.

Other items Trish seeks out are things she doesn’t grow, like corn, mushrooms, cauliflower and onions, and she buys from the farmers she’s known for years—pointing out Sage Hill Ranch Gardens, Rockin R Local Hens, Indian Summer Farm, JR Organics and Rodney Kawano Farms, among others as we pass.

Trish sells a couple of small boxes of her produce to executive chef Brian Redzikowski at Kettner Exchange each week. “Chef Brian loves my arugula,” Trish says. In fact, Trish spotted her arugula on the plate in the restaurant’s post about its Michelin’s Bib Gourmand on Instagram earlier this year. “I was on cloud nine.” Besides the leafy vegetable, Trish provides Brian with shishito peppers, nasturtiums and cherry tomatoes on a weekly basis. 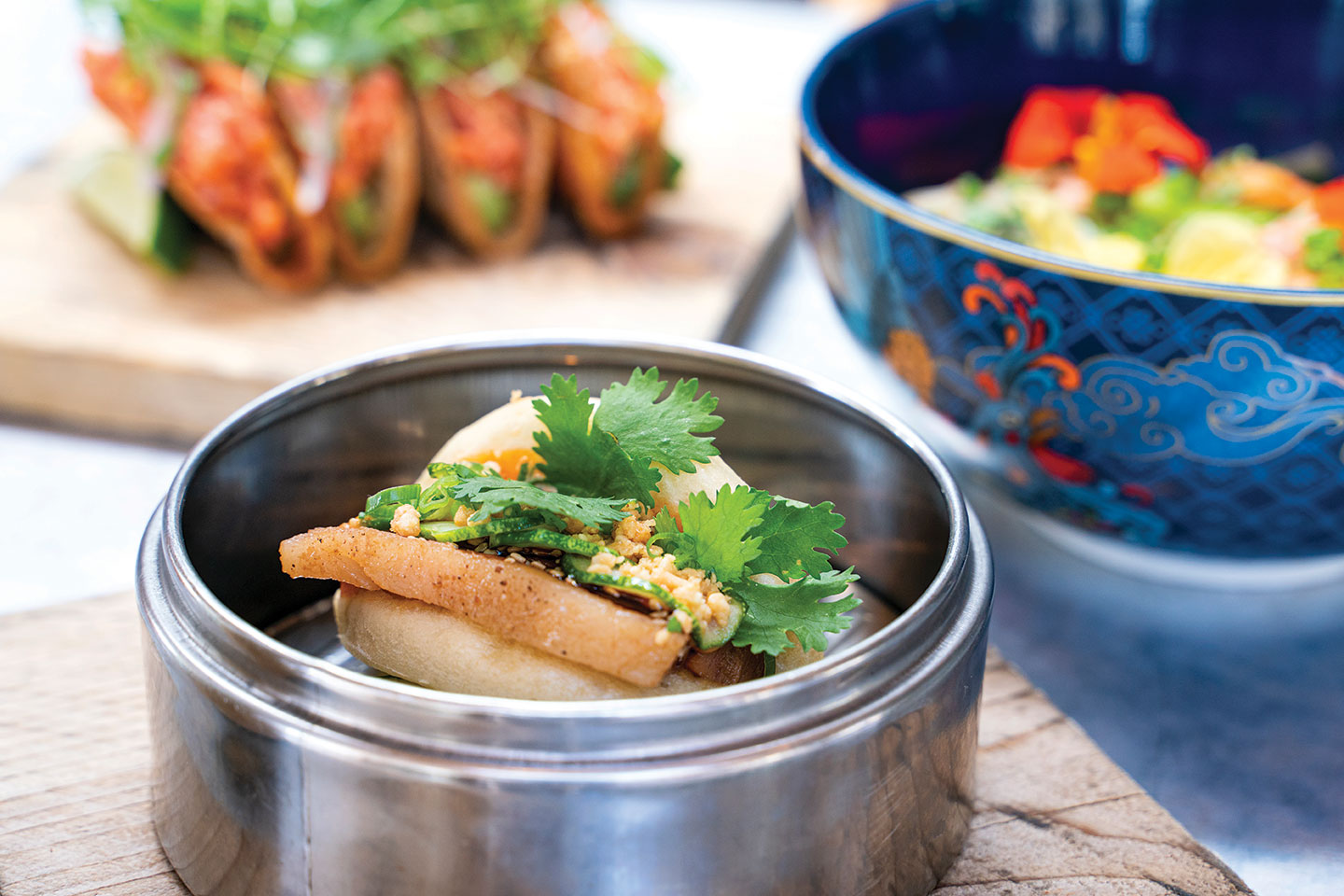 Trish Watlington tries three different dishes at Kettner Exchange (above) and a cocktail made with artichoke cynar and maraschino liqueur (pictured below). 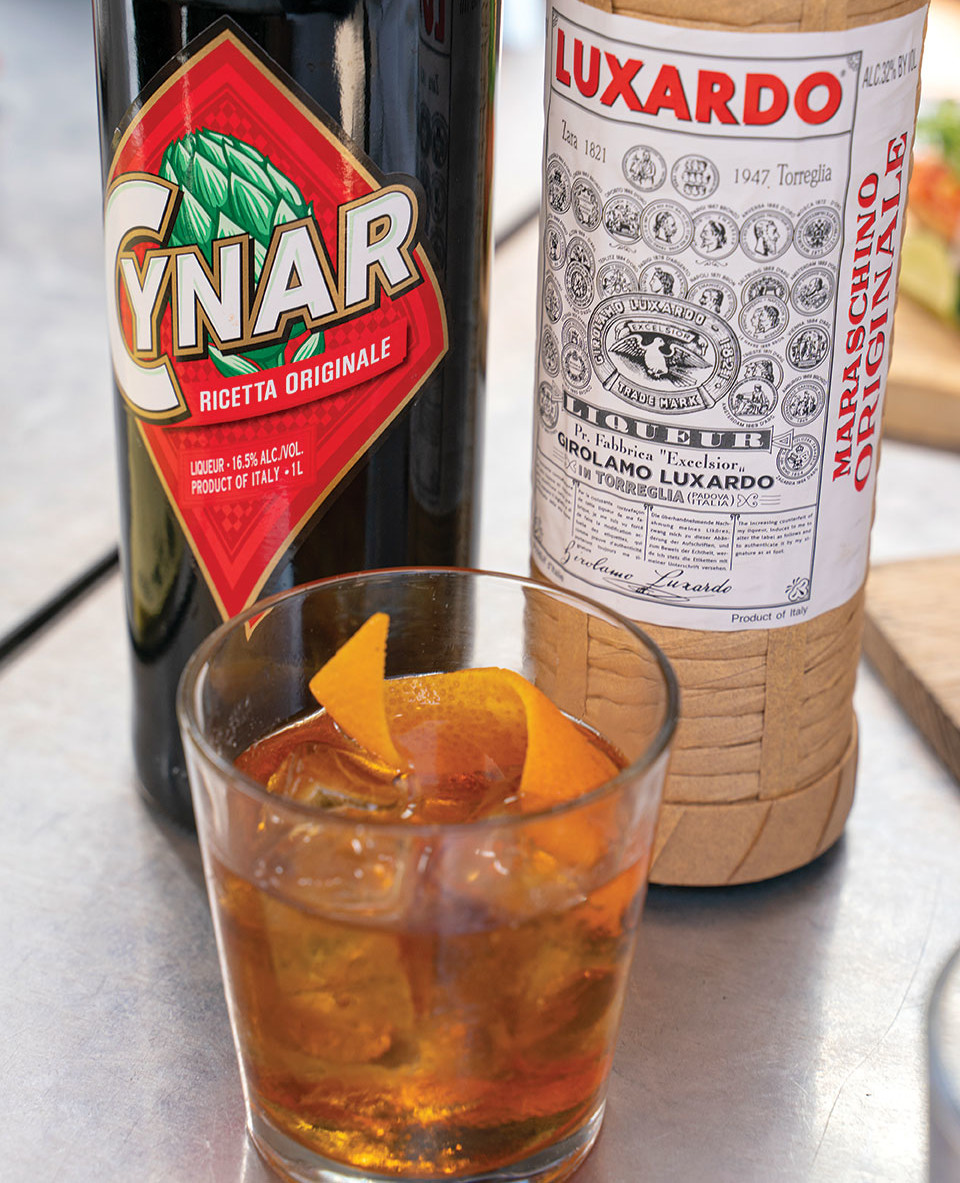 When she’s not working, she comes for the lamb shawarma and the shishito peppers, or she stops in for a cocktail with friends. That’s what’s on the agenda today as well as a few small plates to share. She samples the Artichoke Hold, which combines bourbon, maraschino, artichoke cynar and orange bitters (pictured at right). “I like a bourbon-forward drink,” she admits. Then Brian brings the big-eye tuna tacos with guacamole, crème fraiche and cilantro; the Pig Mac steam bun with two patties, lettuce, onion, pickles and a secret sauce; and the grilled shrimp salad topped with Trish’s nasturtiums. “It’s absolutely wonderful to see what chefs do with produce,” she says.

This is Trish’s place for a special dinner. Today, she comes before they open. She’s sampling Juniper and Ivy’s offering for Farm to Fork Week—and also a few other dishes. The menu changes often, depending on what’s available from the local farms they support. Today, there’s a summer melon salad with coconut milk, spicy togarashi granola and rosé snow. “It’s a party in your mouth,” Trish says. “It’s sweet, spicy, crunchy and smooth. I love the mint and the melon.” The Mexican street squash arrives next. Executive chef Anthony Wells elevated the veggie with a chipotle crema, spiced pepitas, pickled jalepenos, cotija and lime. 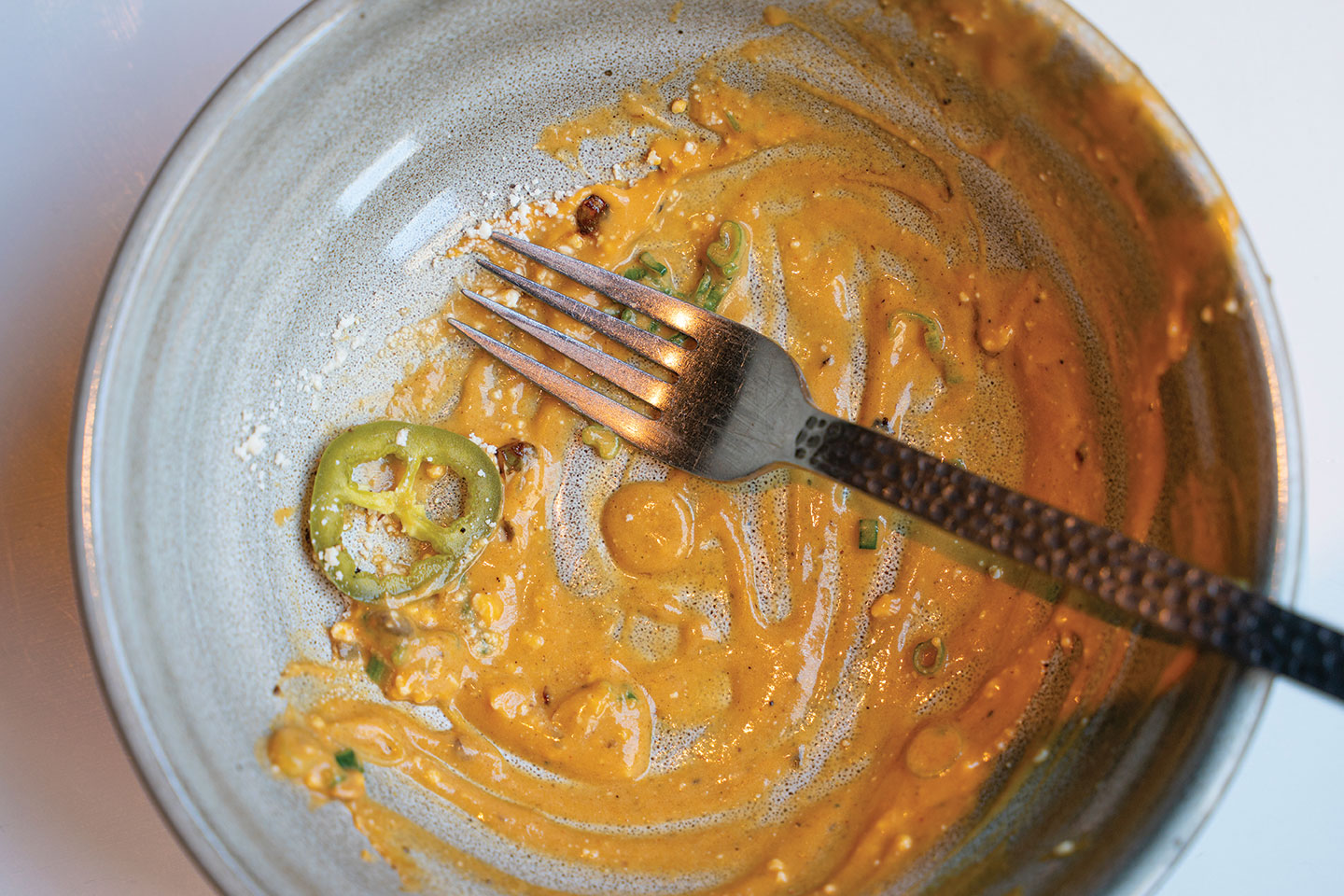 It’s one of those farmers-market specialties. Squash showed up at the market, and it had to be on the evening’s menu. The three of us taste, devour and nearly lick the plate (right) clean.

The locally caught La Jolla spot prawns (below) come last. They’re impressive—halved and swimming in an Old Bay butter, lemon and corn garlic chive sauce—and intimidating, too. We scrape the creamy goodness out of each shell and dig in. 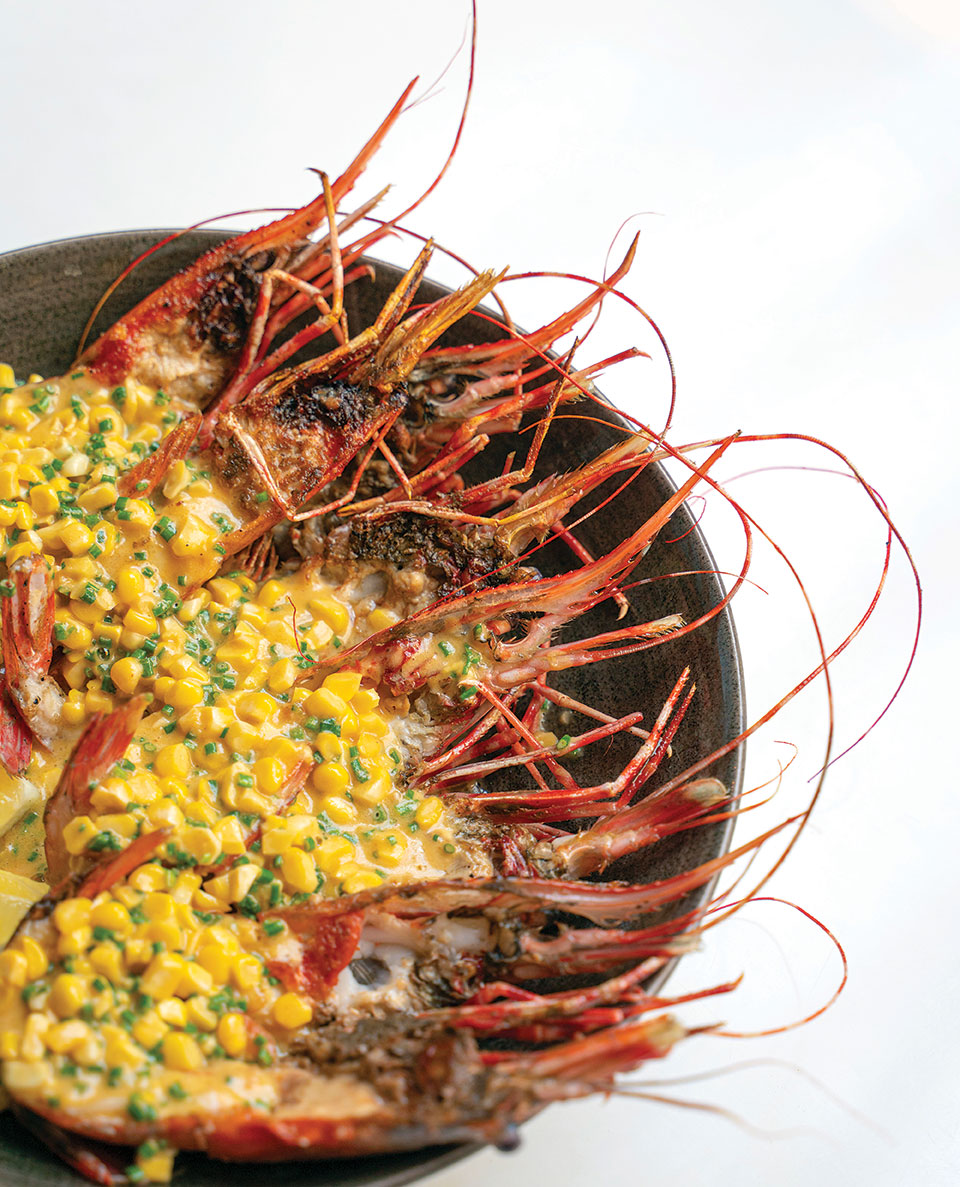 Tae Dickey, the restaurant’s owner and executive chef, was born in South Korea but makes some of the best Italian dishes in the city, Trish notes. “BIGA is one of the top three Italian restaurants in the county. The pizzas [and the optional gluten-free crust] are wonderful.” She also likes that Tae supports so many local farmers (the list of more than a dozen farms can be found on the menu), and he hosts special dinners that celebrate suppliers. The “Sea to Fire” series, for instance, invites an expert fish monger from Catalina Offshore to share stories while guests enjoy a four-course meal highlighting the freshest catch and accompaniments featuring seasonal selections from local farmers. Sign up for BIGA’s newsletter to find out about these special events. 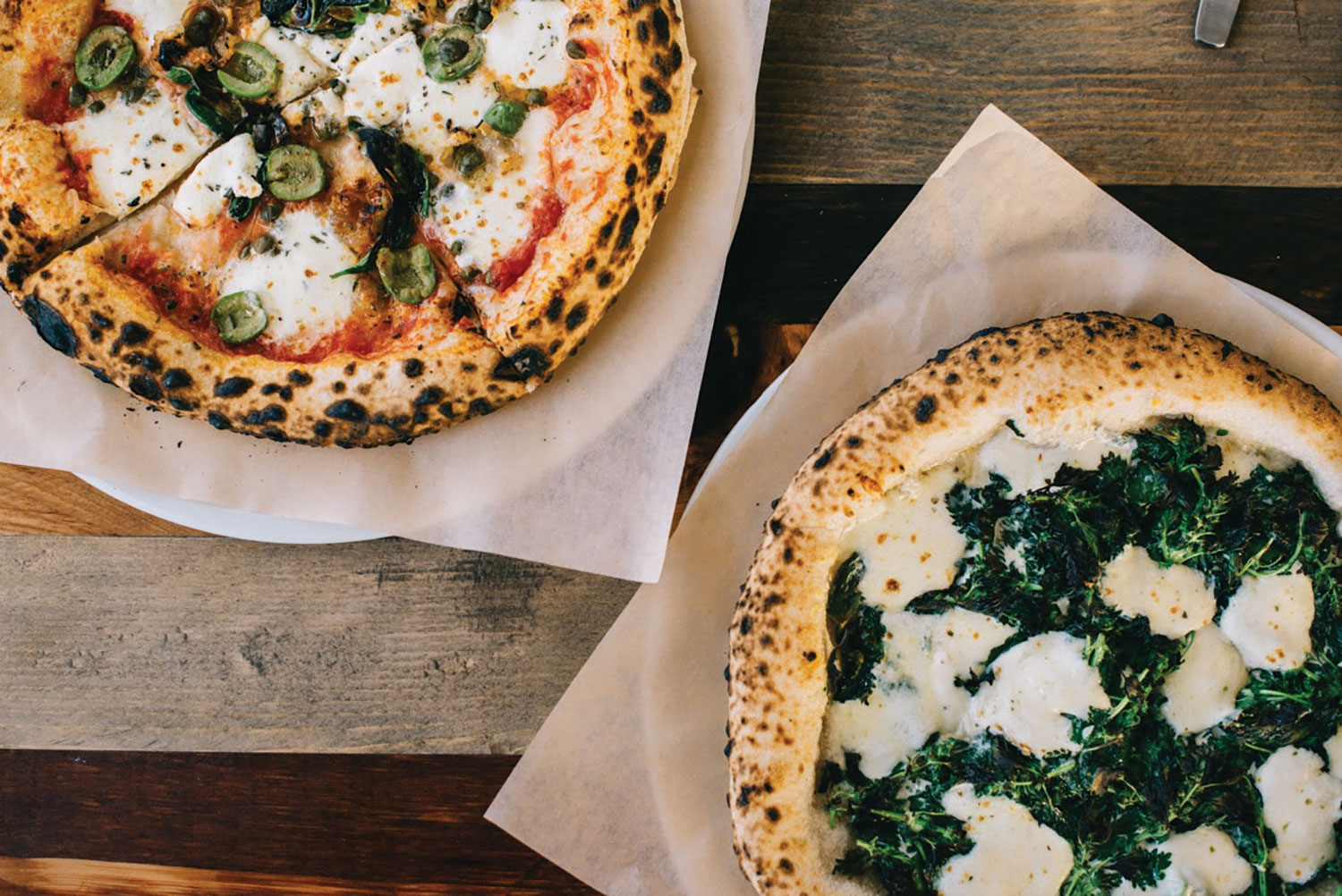