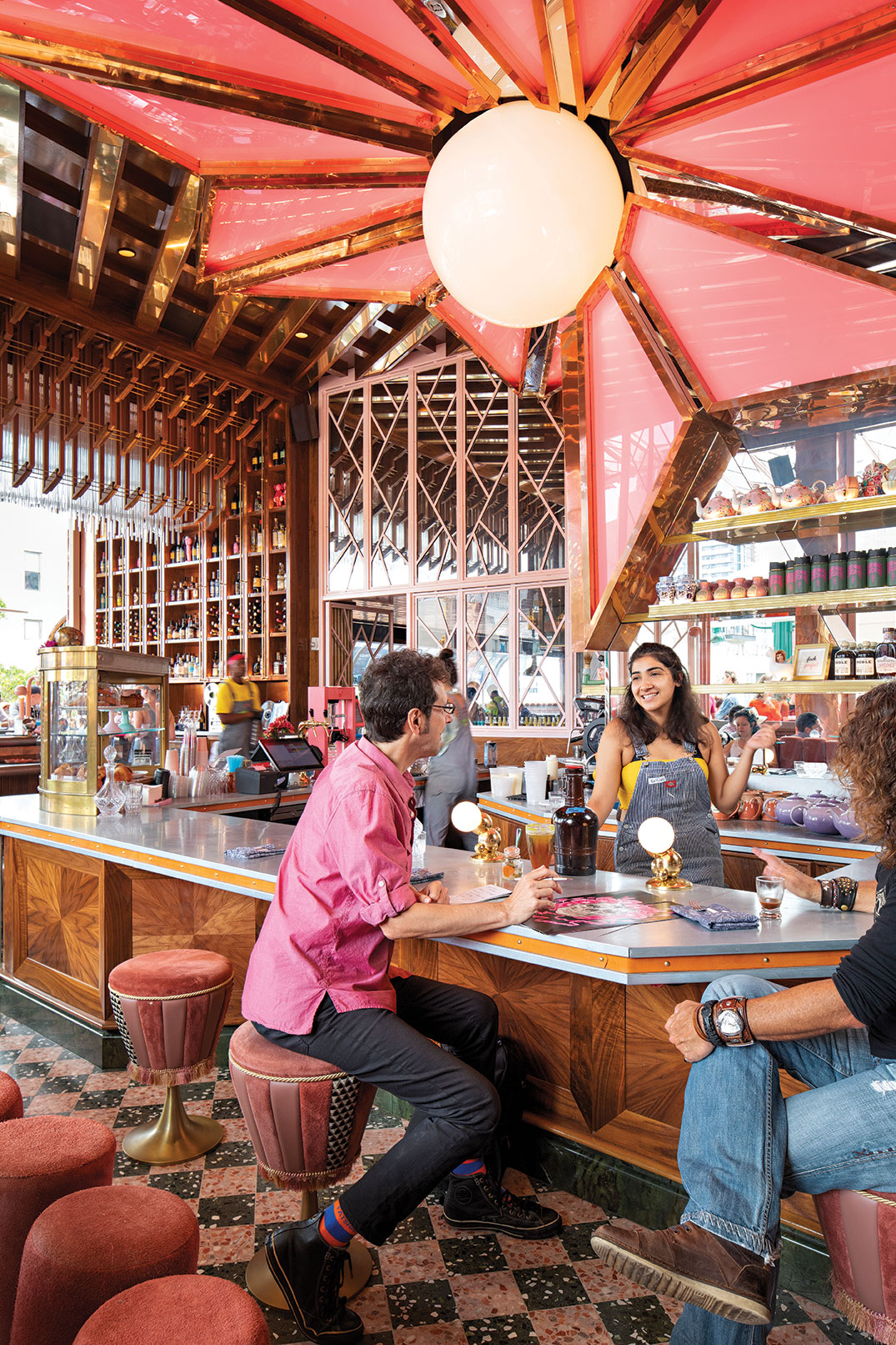 If you go to the wildly popular Little Italy breakfast-’n’-brunch destination Morning Glory don’t take the elevator— particularly if you’re coming from the underground parking garage, which is dark and quiet as a tomb. When the doors open to the restaurant’s second-floor space, you will be immediately, disconcertingly thrust into the middle of a chaotic, quirky scene, like Dorothy opening the door of her crash-landed farmhouse to a technicolor Oz. It’s a confetti cannon to the face. Instead, please, take the stairs so you can slowly adjust to the environment, like a diver avoiding the bends.

Once you hit the top of those stairs, you’re in for a sensory overload. Morning Glory is part Crystal Cathedral, part Emerald City. It’s hard to tell whether you’re inside or out, thanks to the folding, latticed windows that completely open the space, and curved glass awnings, reminiscent of the convention center, above patio seating. Designed by Paul Basile, there are touches of Frank Lloyd Wright, art deco diner and sci-fi, with Entler light fixtures that seem poised to scan you—not to mention the restaurant’s centerpiece, a postmodern sunburst sculpture that dominates the main dining room. I’m not sure, but I think the glowing white orb in its center was trying to communicate with me.

I was hoping to settle my brain waves and give my eyes a bit of a respite by retreating into the menu (adorned with a nearly life-sized skull featuring a beaming third eye), but no such luck. It opens up into a MAD magazine version of an acid trip, with surreal graphics and comic asides (the chicken-fried, dry-aged steak and eggs “couldn’t be more down-home if it showed up at your table clutching a CMA award and wearing rhinestones”).

For those who want to get their feet back on terra firma, there are reassuring classics like traditional flapjacks, eggs Benedict and fried chicken and waffles. Keeping in character, though, Morning Glory also offers some offbeat choices that both tempt and amuse. There are the soufflé and German pancakes, fried rice with pork belly and fried eggs, and khachapuri, a kind of breakfast pizza from the country of Georgia; and a pancake and Spam taco, known as the McDiddle, and the Millennial Tears, MG’s take on avocado toast, served with spicy Togarashi focaccia.

It really didn’t seem possible for Morning Glory to pull out any more stops, but they somehow managed it on the drink menu—as in the boozy breakfast libations. There are more than 30, ranging from sparkling to foamy to savory to caffeinated. It’s a list worth working your way through (if you don’t have to work). Chocoholics can also indulge in five different kinds of hot chocolate; Anglophiles can order tea service, complete with finger sandwiches and pastries. Chocoholic Anglophiles are going to be very full.

It’s exuberant and fun and over-the-top—and given that some species of morning glory are hallucinogenic, right on brand. As I walked through the restaurant, a June bug with a gleaming iridescent sheen floated past me, and it didn’t seem out of place. Honestly, if the Lollipop Guild had walked up and serenaded me at my table, I wouldn’t have been surprised. 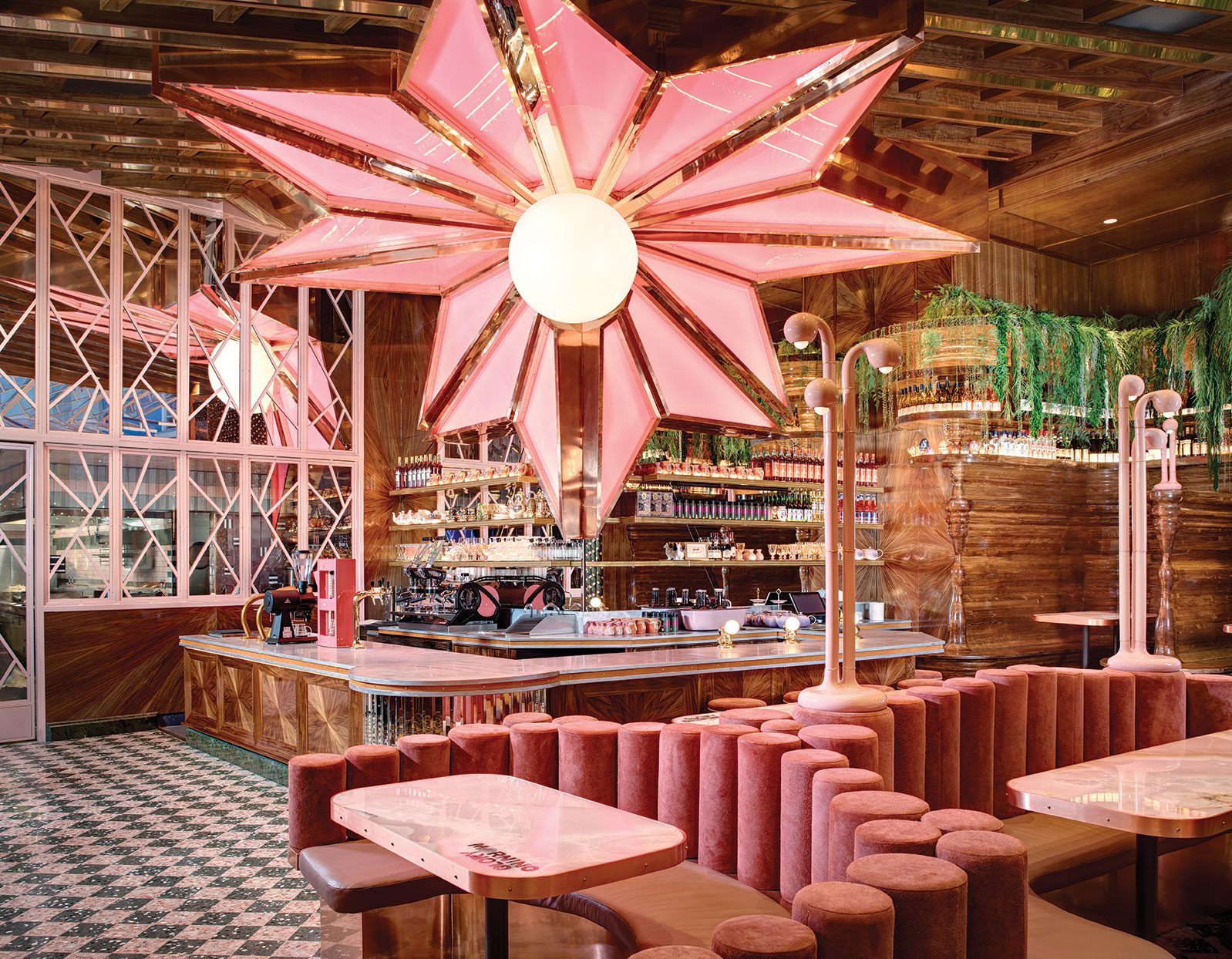 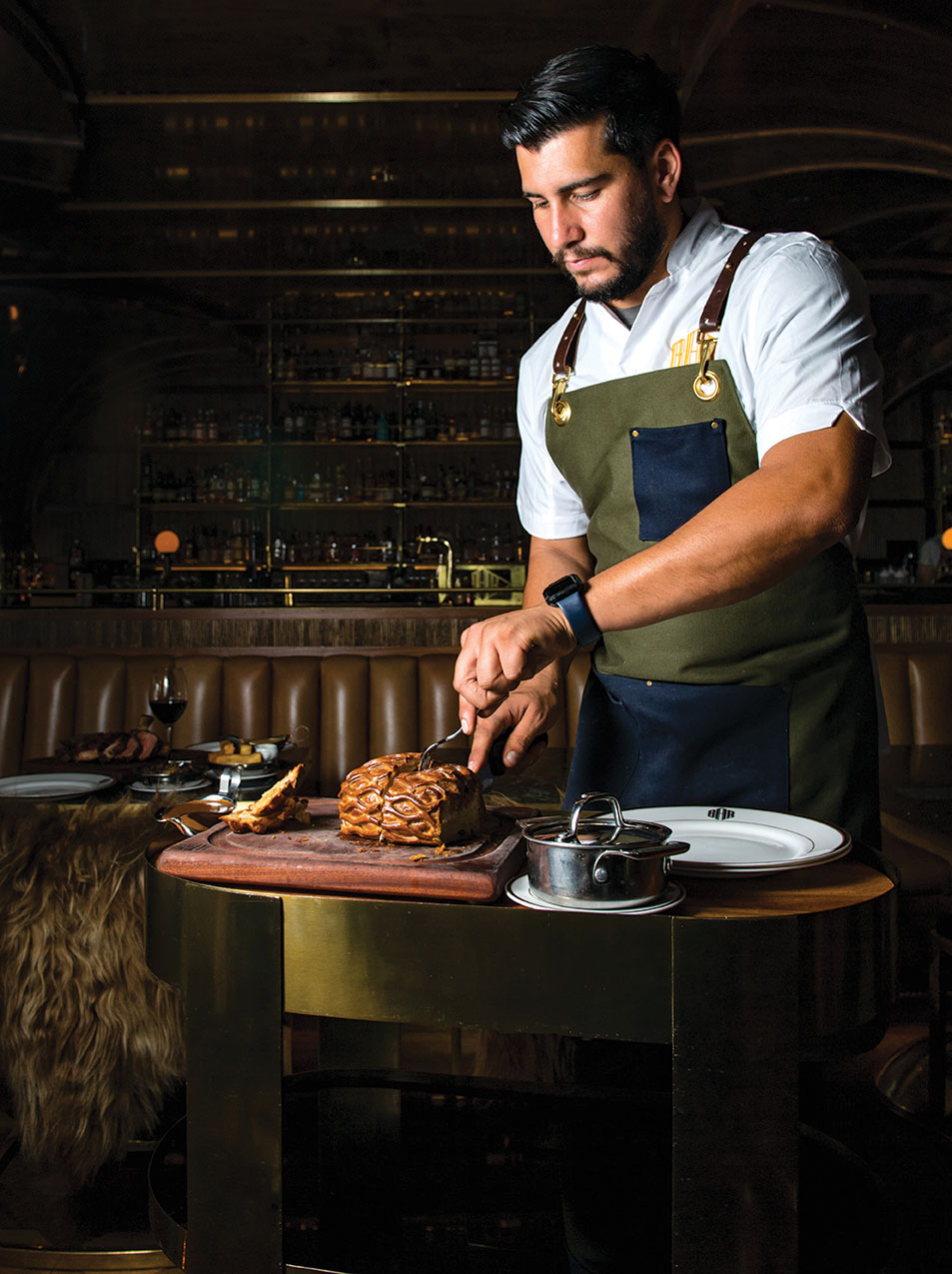 Looking for more places to take dining to the max? Consortium Holdings, creators of Morning Glory, specializes in dazzling dining spaces. It’s stable of restaurants includes Born & Raised, the gilded, old-school steakhouse where tableside carts serve up everything from martinis to shrimp Louie. At Del Frisco’s Double Eagle Steakhouse, the opulent, view-enhanced restaurant that anchors the Embarcadero’s InterContinental Hotel, you can indulge in a Wagyu tasting menu that serves up a trio of buttery beef selections, including a portion of Japanese A5 beef, the rarest, most celebrated cut of cow on planet Earth. Still topping the foodie food-chain in San Diego is Addison, owner of San Diego’s only Michelin star (not to mention the county’s only AAA five-diamond award). With continental (as in Europe, not Antarctica) elegance and enough class to fuel a Merchant Ivory film, Addison offers five- and 10-course tasting menus of contemporary, seasonal haute cuisine, and features an astonishing wine list.

Il Dandy, another visual stunner, offers a decidedly intimate experience with its exclusive, six-seat chef’s table. This restaurant within the restaurant is dubbed Arama and is an ode to the Calabrian restaurant where Il Dandy’s father-son duo, Antonio and Luca Abbruzzino, earned their Michelin stars. It’s a 12-course, chef’s mercy experience. 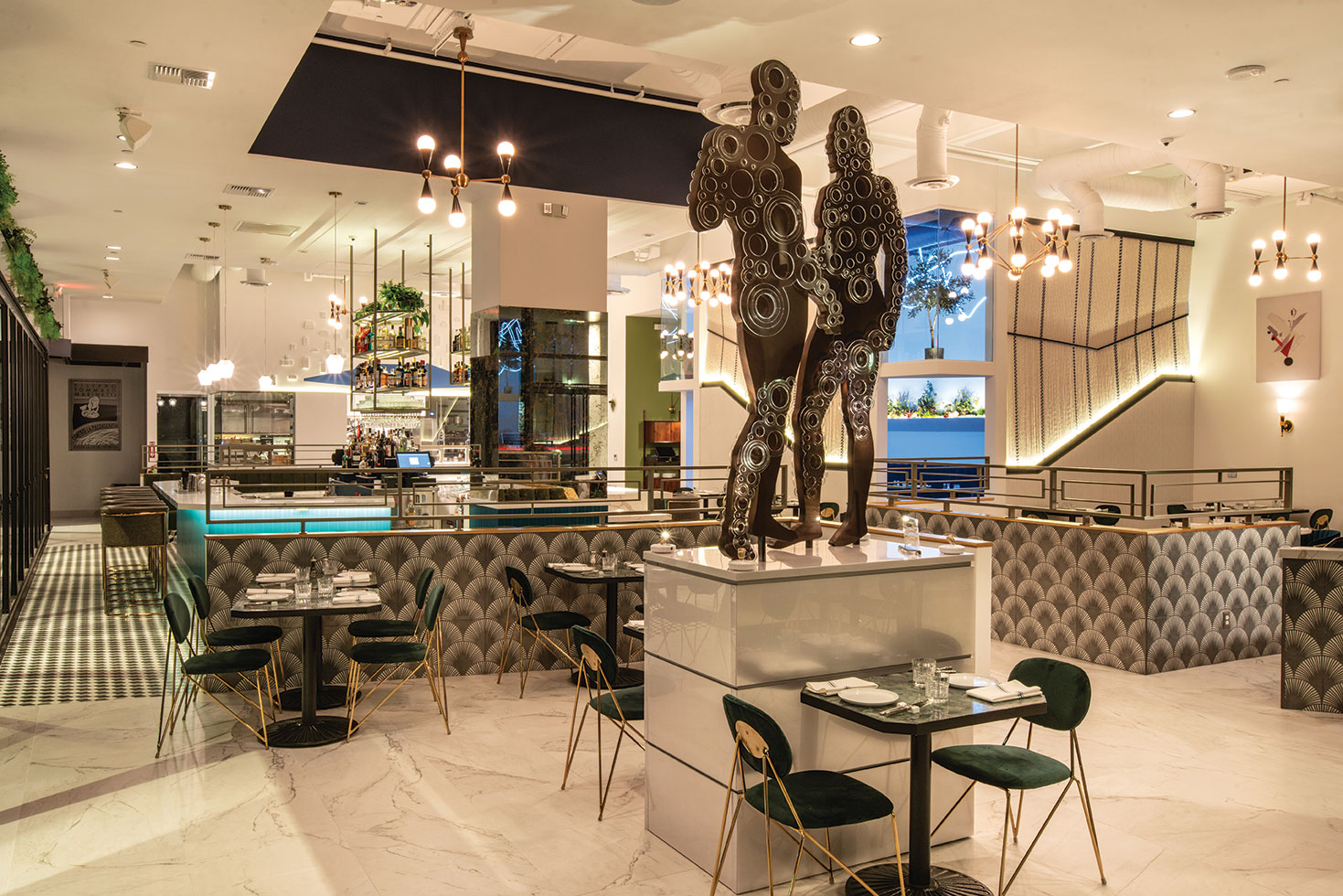 Thar be monsters at Deli Sushi & Desserts, home of the monster sushi roll. These babies are eight times the size of a normal roll and weigh, well, as much as a baby. You can go up on Deli Sushi’s wall of fame (and eat for free) if you polish one off by yourself within 15 minutes. But for the love of Ahab, just share it.

If you have a hankering for an extreme cocktail, Serea, the Hotel Del’s new coastal cuisine restaurant, has you covered with San Diego’s most outrageous drink—at least price-wise. A mix of Russian vodka, Dom Pérignon Champagne, Marcona almond orgeat, Meyer lemon juice and a bump of caviar, the Fugu Del clocks in at $150. But you do get to keep the novelty hand-blown glass puffer fish the drink comes in. 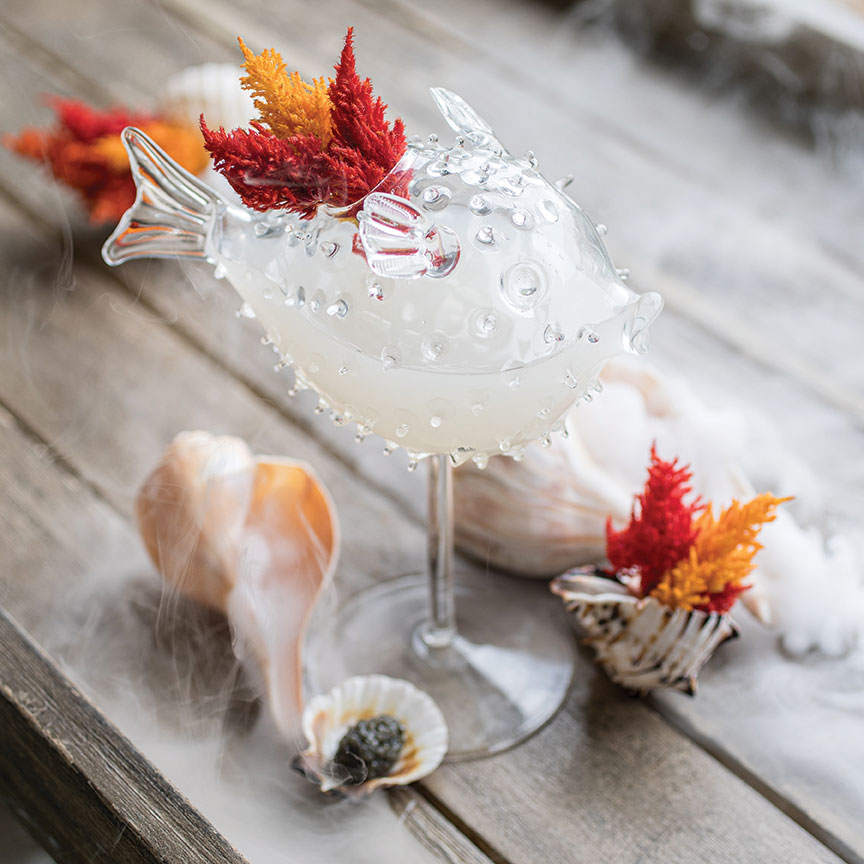 And if you’re looking for a fireworks display to go along with your dessert, look no further than the pyrotechnic-laden King Kong sundae that serves 12 at Sugar Factory; or there’s the pot of Chocolate Gold Fondue ($1,000), which comes with gold-dusted gummy bears, a bottle of Champagne and a giftbag of sweets. 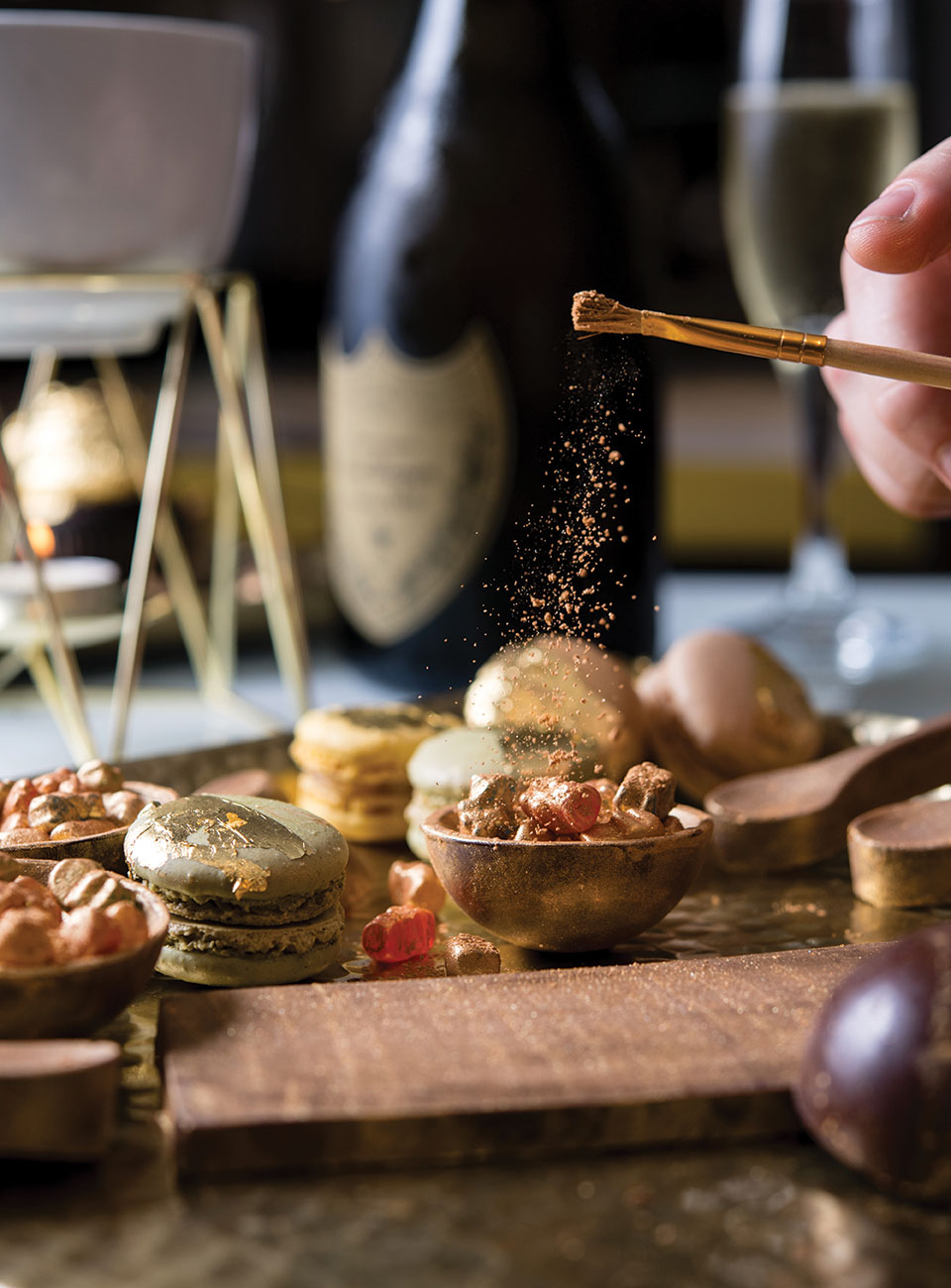 But what if you’re on your own or on the go? Can you still go through the confectionary looking glass? Why, yes you can, thanks to San Diego’s own Donut Bar, with its ginormous ode to Homer Simpson’s dietary staple, the pink donut; LAB Dessert & Coffee’s mind-bending cotton candy burrito, with your choice of daily ice creams and sprinkle toppings; and Crème and Sugar, where epic milkshakes are named for unicorns and pink elephants. If you manage to get to the bottom of your glass, you just might be seeing them yourself.