Around Town with Zandra Rhodes 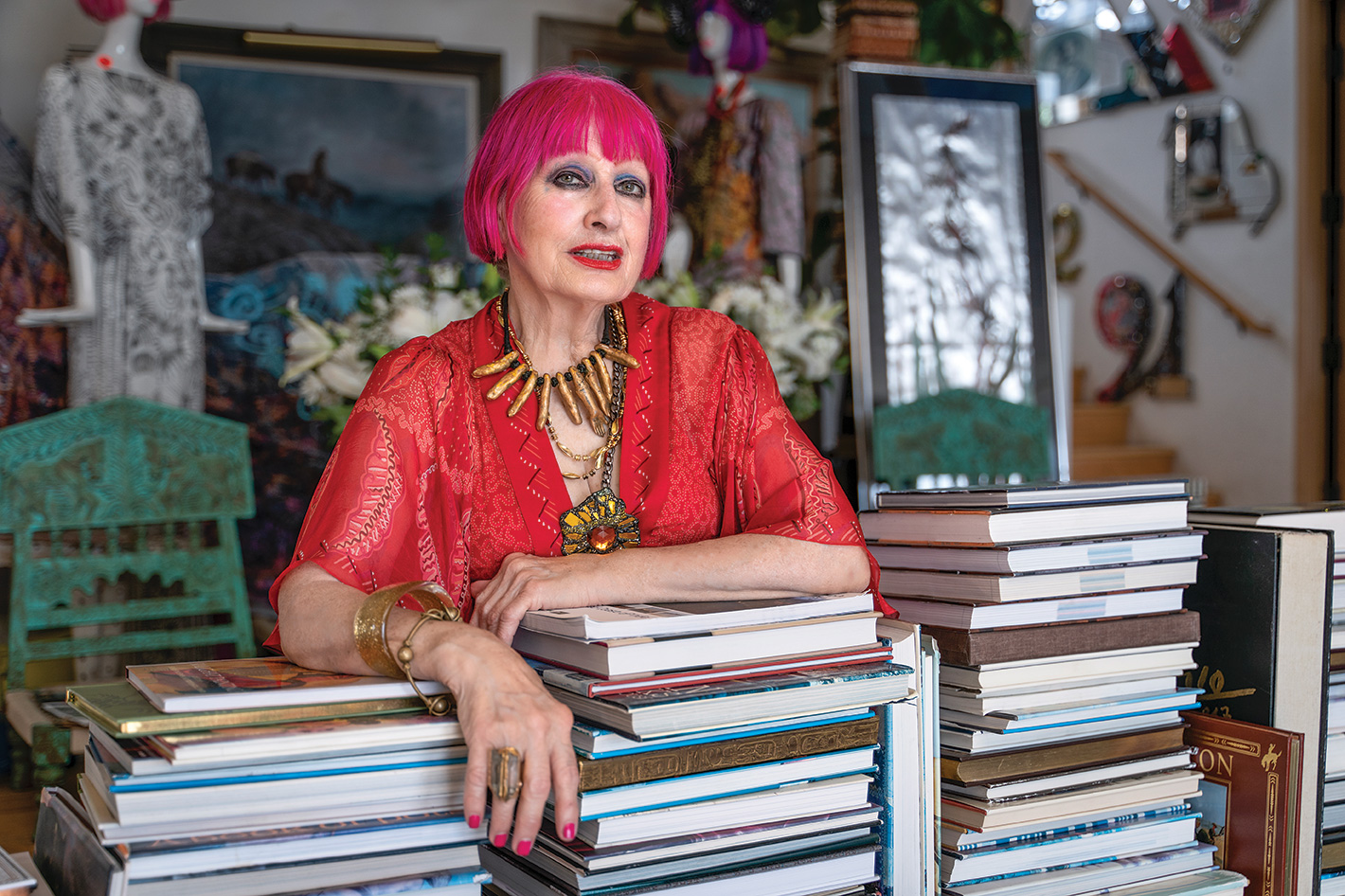 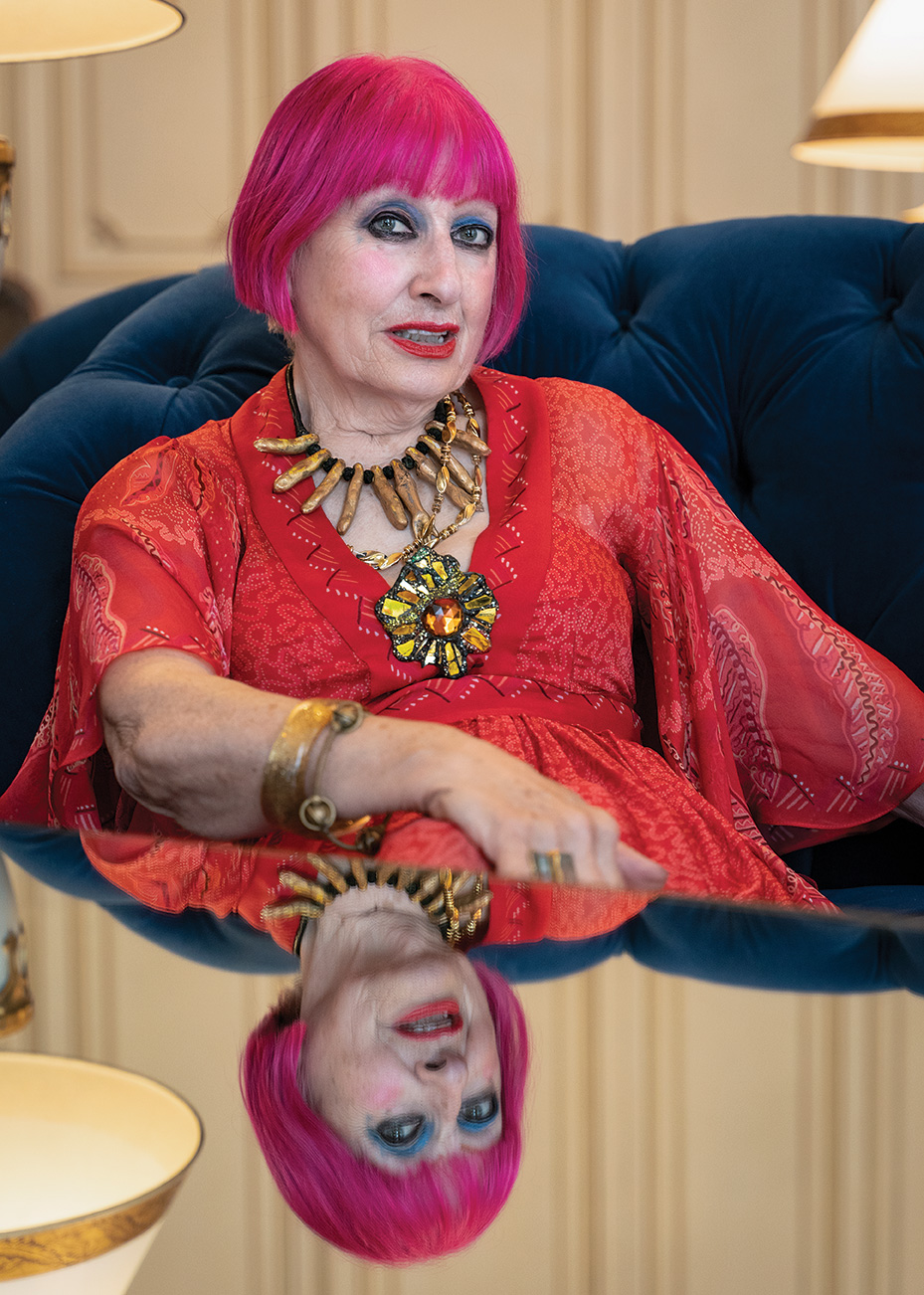 Dame Zandra Rhodes really needs no introduction. Her pink bob and theatrical makeup have become her signature as much as her boldly feminine designs that have graced everyone from Jackie Onassis to Barbara Streisand.

She’s always busy, regularly jetting between her rainbow penthouse in London (which we featured in our October 2018 issue) and her home and studio in Solana Beach. And at 79, the iconic British designer’s not showing any signs of slowing down. This month, she’s doing an author’s signing, and next month, she’s hosting her 20th annual fashion show. Plus, she’s got another book she’s working on with her sister and a line of housewares she’s creating for IKEA. Lucky for us, she made room in her packed diary to spend a couple of hours taking us to the places she loves, wearing one of her own striking designs with bold jewelry and platform shoes, of course.

Every year, Zandra shows a new collection in the Versailles Ballroom here during a three-course luncheon crafted by the hotel’s executive chef Fabrice Hardel. This year, the event (which always sells out) will be held on Nov. 7. Attendees can try on and place orders for the dresses they see all while helping to raise money for the American Friends of the Zandra Rhodes Museum in London. In the weeks leading up to the show, Zandra schedules morning meetings in the hotel’s Westgate Room to plan. “I always order the lemon ricotta pancakes,” she says of Fabrice’s French grandmother’s recipe that he serves with blueberry marmalade and whipped cream. “And they have gorgeous juices so I get one of those.” 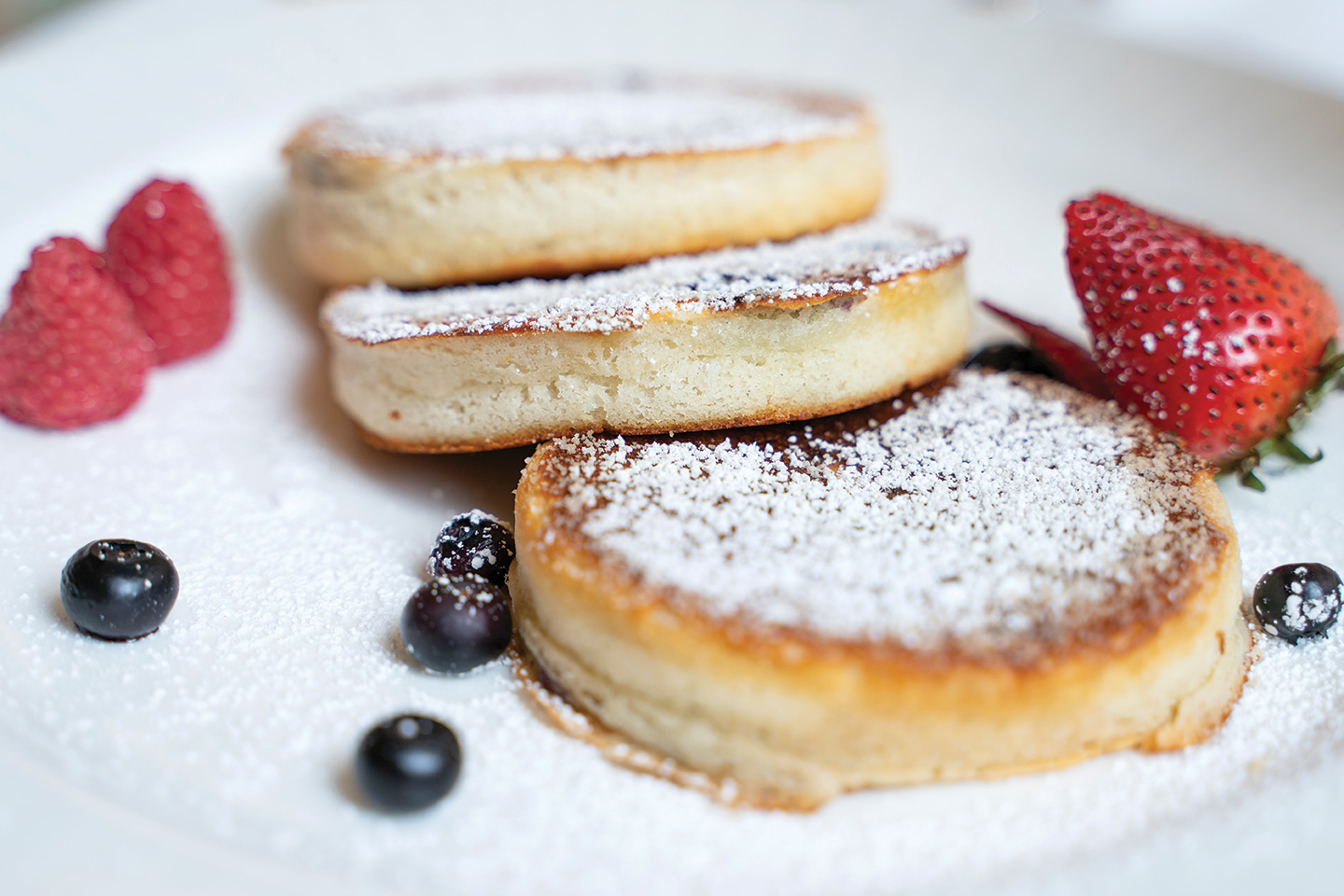 Today, she complements her pancakes, which are light and fluffy, with the green apple, kale and celery juice and a cup of tea. Besides snagging one of the coveted tickets to Zandra’s fashion show, visit the hotel for its Literary Afternoon Tea or new-this-year Witches Tea—both taking place this month.

Nearly every weekend, early in the morning before the crowds arrive, you’ll find Zandra and some of her friends walking different trails on the cliffs above Torrey Pines State Beach and the Pacific Ocean. While it’s good exercise with magnificent views, Zandra goes to get content for another book she’s collaborating on with her sister. “I have a collection of books that I had as a child,” Zandra says. “It’s all about flowers, and each flower is drawn as a fairy. I decided to do something similar.” So on each hike, Zandra seeks out new native flowers and plants. She photographs them, then comes home, looks up the image in a California native plant book she has and sketches the delicate blooms, like Indian paintbrush (Castilleja affinis) and Padre’s Shooting Star (Dodecatheon clevelandii) as a fashionable fairy. Her sister, Beverley, writes a corresponding poem. There’s not yet a publication date for the pair’s illustrated book of verses, but Zandra loves that they’re working on it together.

“I never shop for clothing,” Zandra confesses. “But I do love to buy art books.” And the oldest family-owned and operated bookshop in La Jolla is her favorite place to get them. Find Zandra here on Oct. 14 at 7:30 p.m., where she’ll discuss and sign copies of her own book, Zandra Rhodes: 50 Fabulous Years in Fashion, which commemorates five decades of her most recognized looks.

The public art collection of 20 site-specific unique sculptures at various locations around the UC San Diego campus create an intriguing, magical experience that Zandra says shouldn’t be missed. She enjoys “Trees” by Terry Allen, cut down eucalyptus trees the artist stripped of their leaves, encased in lead and wired for sound. One reads poetry; the other plays music. She also appreciates Korean artist Do Ho Suh’s “Fallen Star,” the crooked house perched on top of the Jacobs School of Engineering that explores the notions of home and cultural displacement. The rooftop garden in front of the house is lush with vines, flowers and vegetables. The uneven dwelling and outdoor space is open to the public Tuesdays and Thursdays 11 a.m.-2 p.m. Download a map online and take the self-guided walking tour to explore all the installations at your leisure. 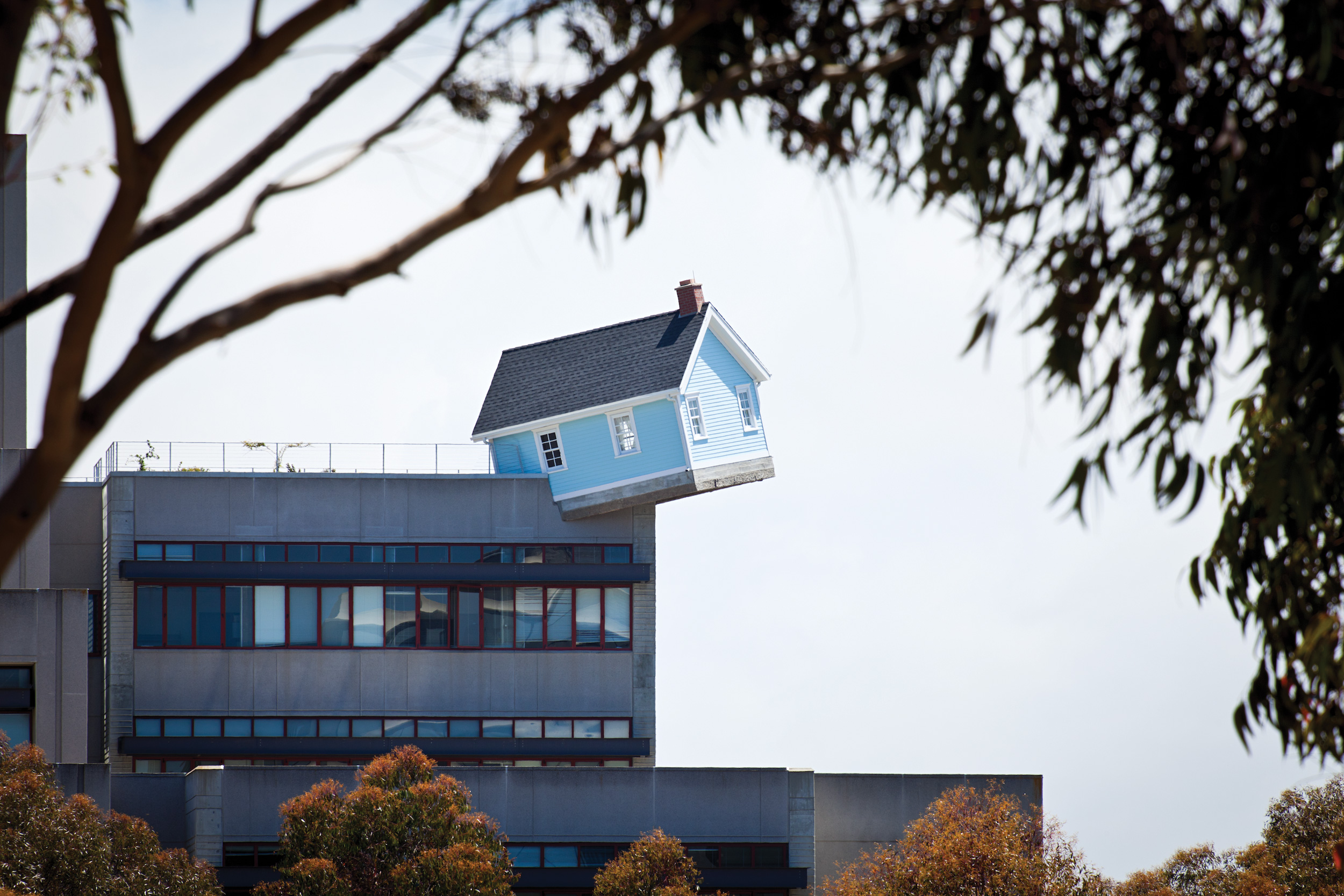 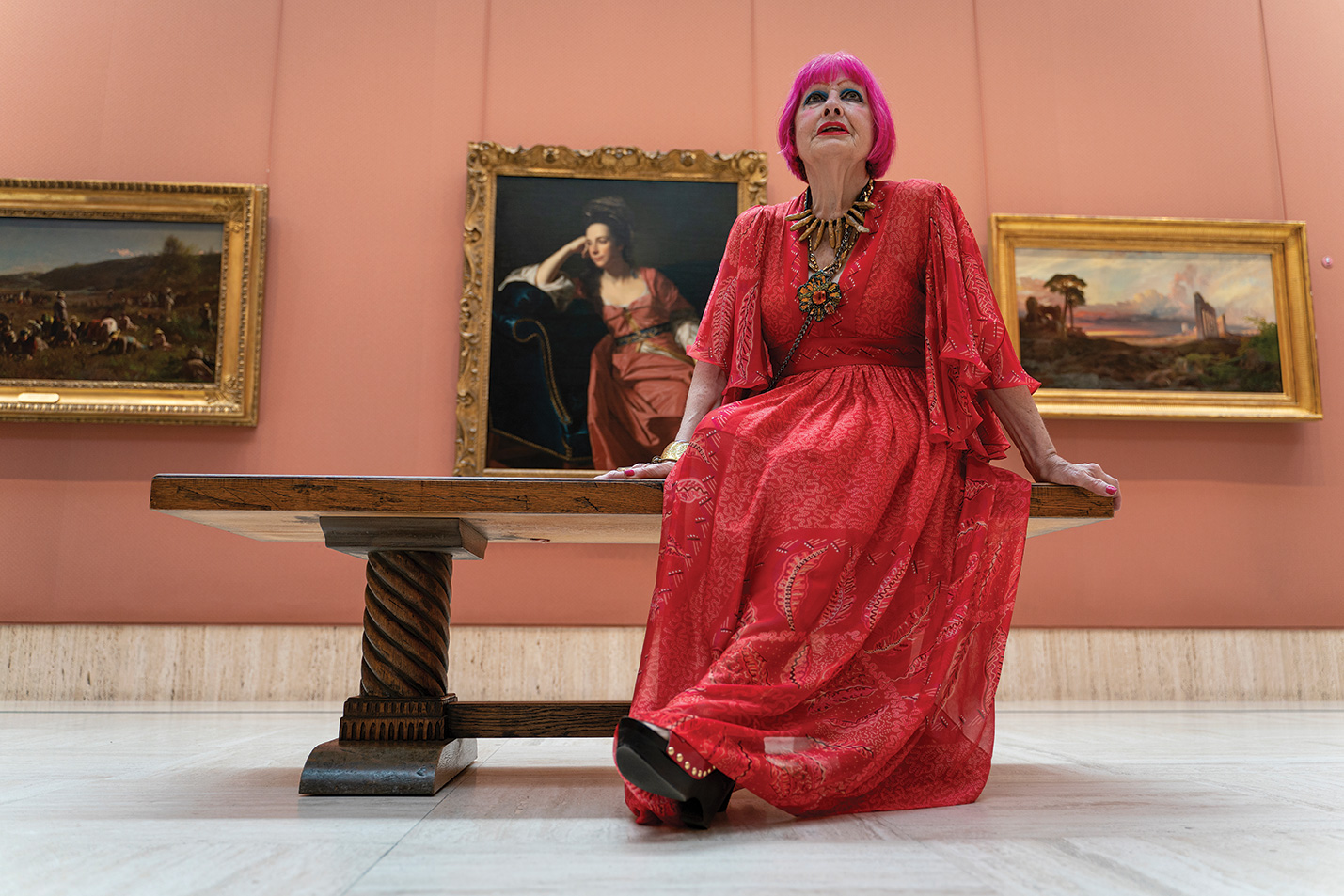 Zandra navigates the way to a small parking lot just south and west of this always-free museum in Balboa Park. “I come for the Russian icons.” she says, standing in front of part of the permanent collection that spans five centuries. Zandra also admires the Dutch/Flemish artist Anthony van Dyck’s work. “There are really good examples of European paintings here,” she adds. This month, check out the “Masterpieces of Italian Drawings from The British Museum,” an exhibition of 54 works depicting themes of birth, death and resurrection now through Dec. 15. After exploring inside the museum, Zandra suggests wandering out to the garden courts that dissect the museum’s middle and the lily pond just outside to the east. She likes to spend time in the serene beauty of the landscape. “San Diego is so lucky to have [Balboa Park] preserved. It’s really magnificent.” 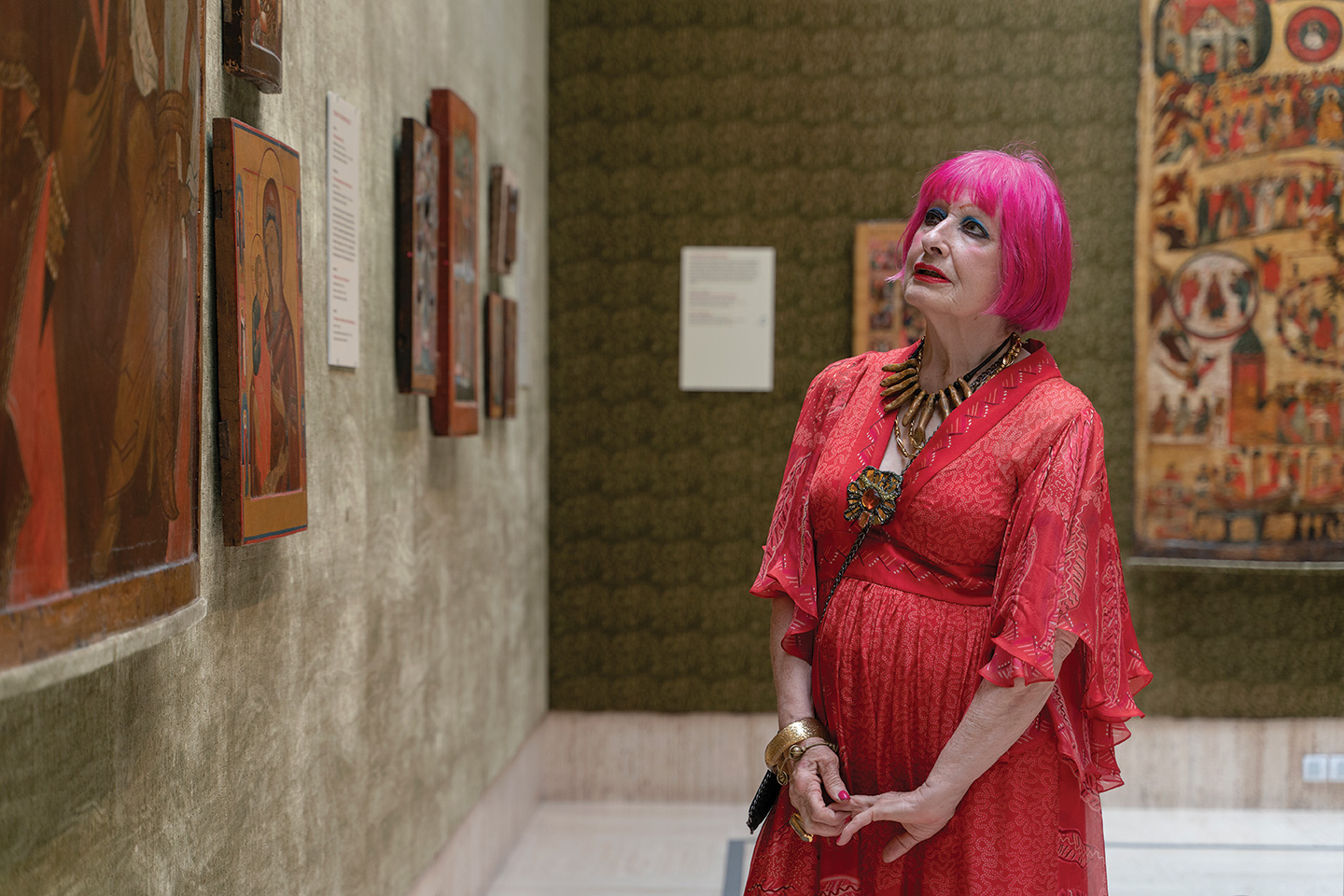 It’s hard to find a place to let the eye rest inside Zandra Rhodes’ temporary studio and the home she shared with her longtime partner, the late Salah Hassanein. There’s art and photos on every wall—including the walls in the powder room—stacks of art and history books, metallic fabric wrapped around bookshelves and on sofas and setees, and racks of her own art, the abstract-patterned floaty dresses she still has silk-screened by hand in London. I could spend hours here (and I nearly do). It’s apparent that this home by the sea can be a source for some over-the-top creativity. 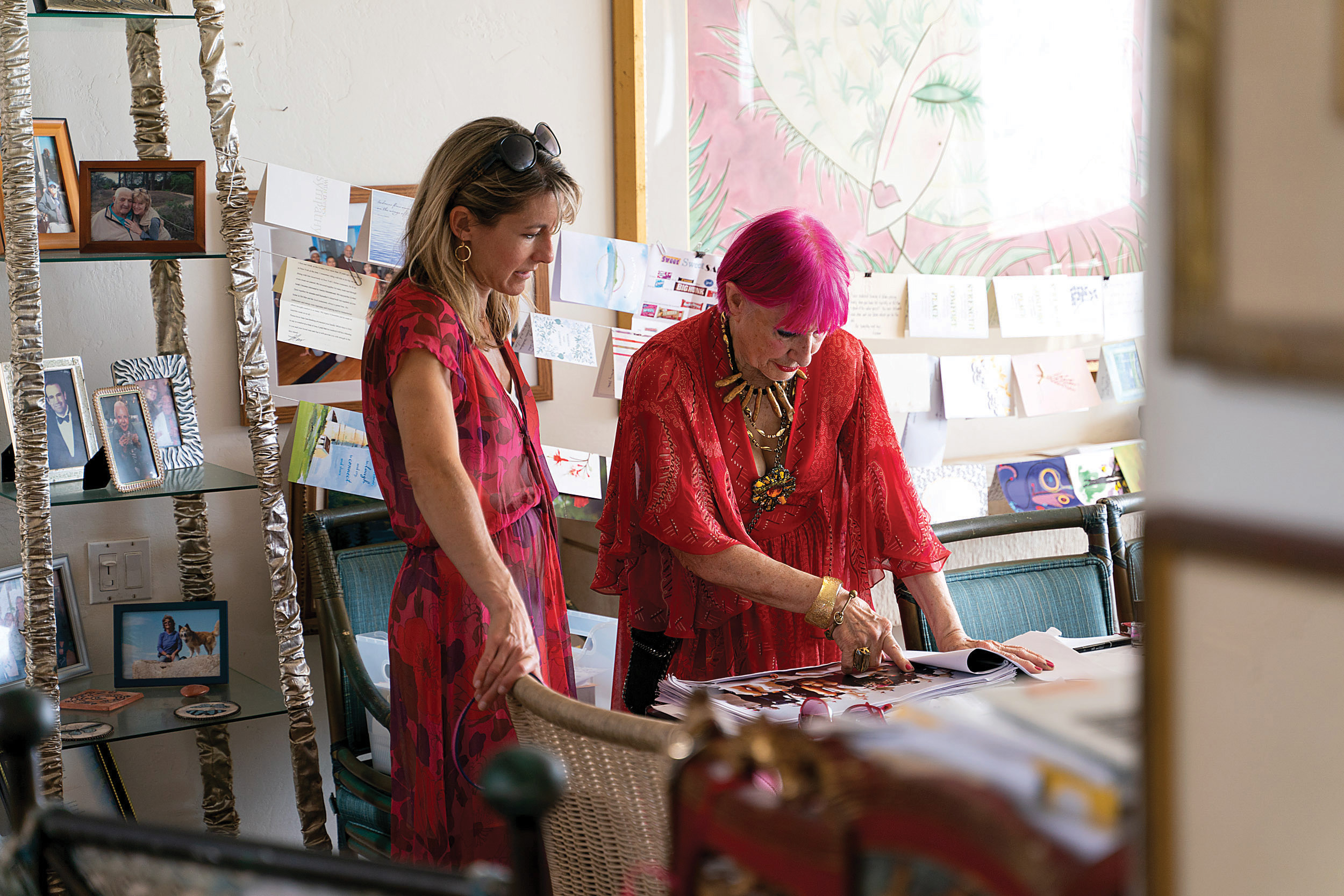 Here, she’s taking me on a trip down memory lane as she flips through the pages of her recently published book Zandra Rhodes: 50 Fabulous Years in Fashion. Zandra’s been a trailblazer in the fashion world and an accomplished textile designer (which is why friends clamor for her quarterly chiffon-scarf sample sales), and the versatility of her imagination is incredible. 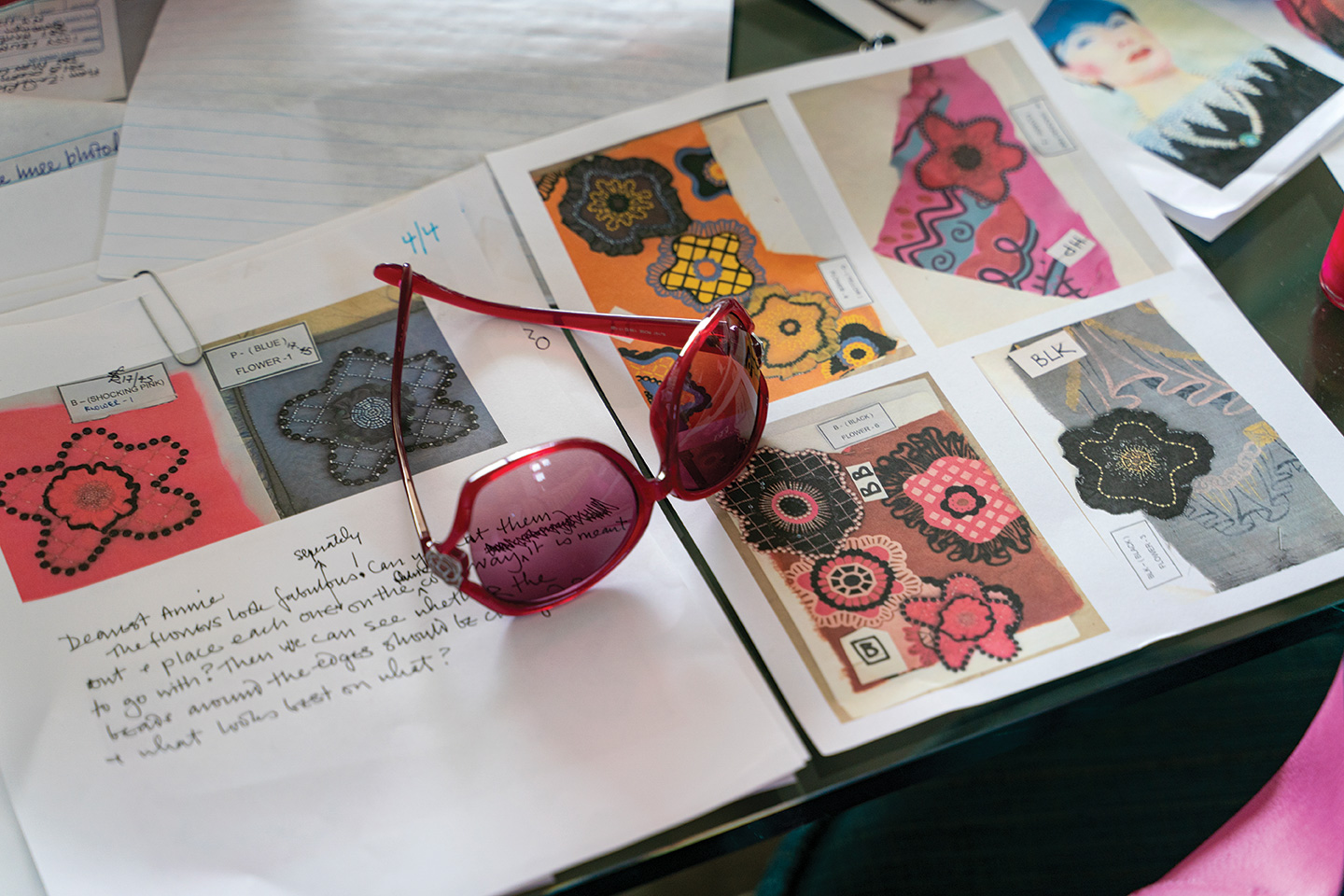