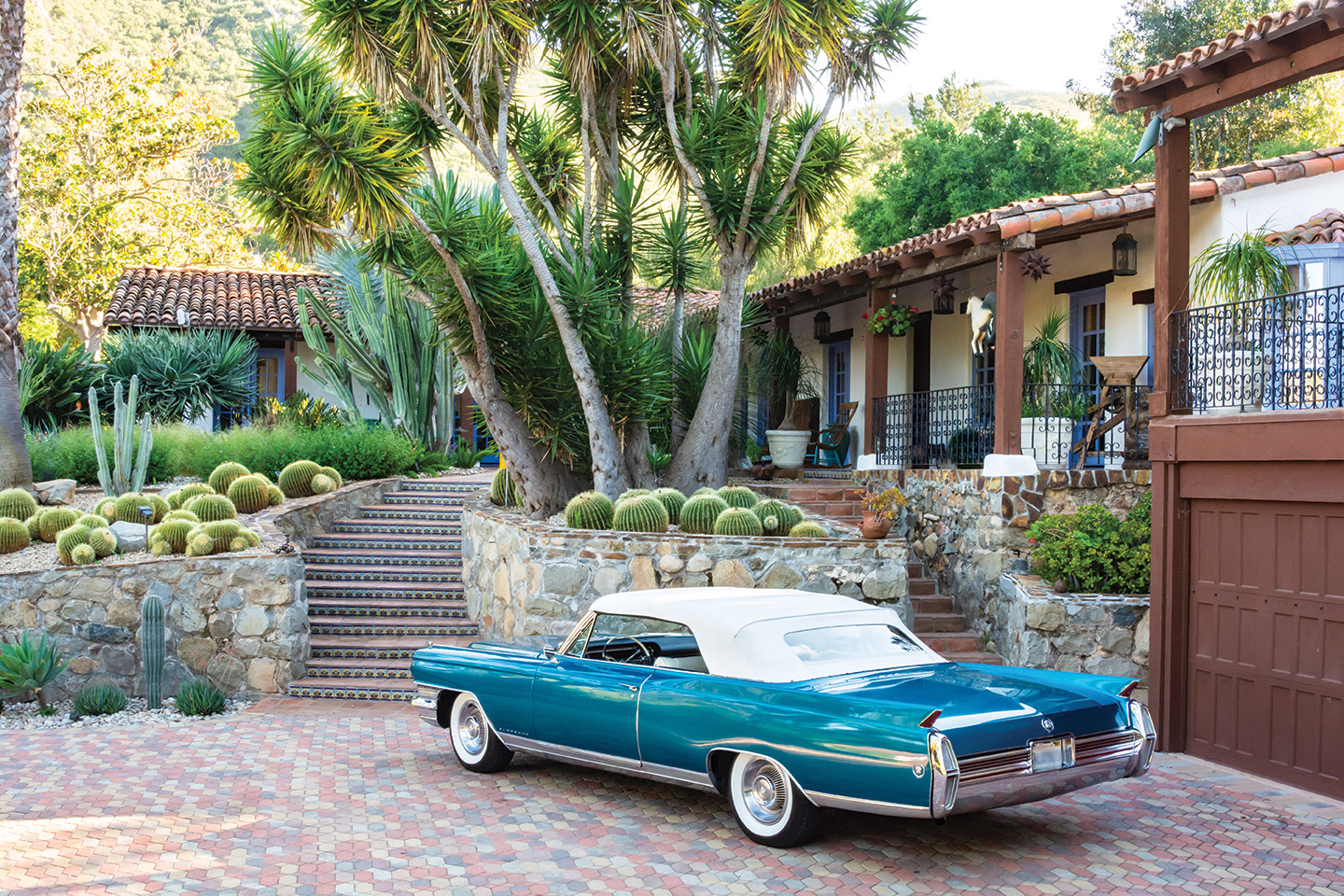 A 1964 Cadillac Eldorado convertible in Jeff Phillips’ vintage car collection marks the entrance to his 1926 adobe ringed by 6 acres of gardens and wildlands near Lake Hodges.

Jeff Phillips’ passion for “old things” stretches back to his childhood in Yuba City, California, where at age 10, he began collecting antique Singer sewing machines. Small-town life also included tinkering with cars, a teen’s pastime that lives on today in Jeff’s growing collection of vintage vehicles from the 1960s and ’70s.

Even the office for his business consulting company is “antique-y,” says Jeff, who has lived and worked in North County for the past 22 years. “I guess I’m a bit of a pack rat,” he adds. “I’m fascinated by things with a past.” 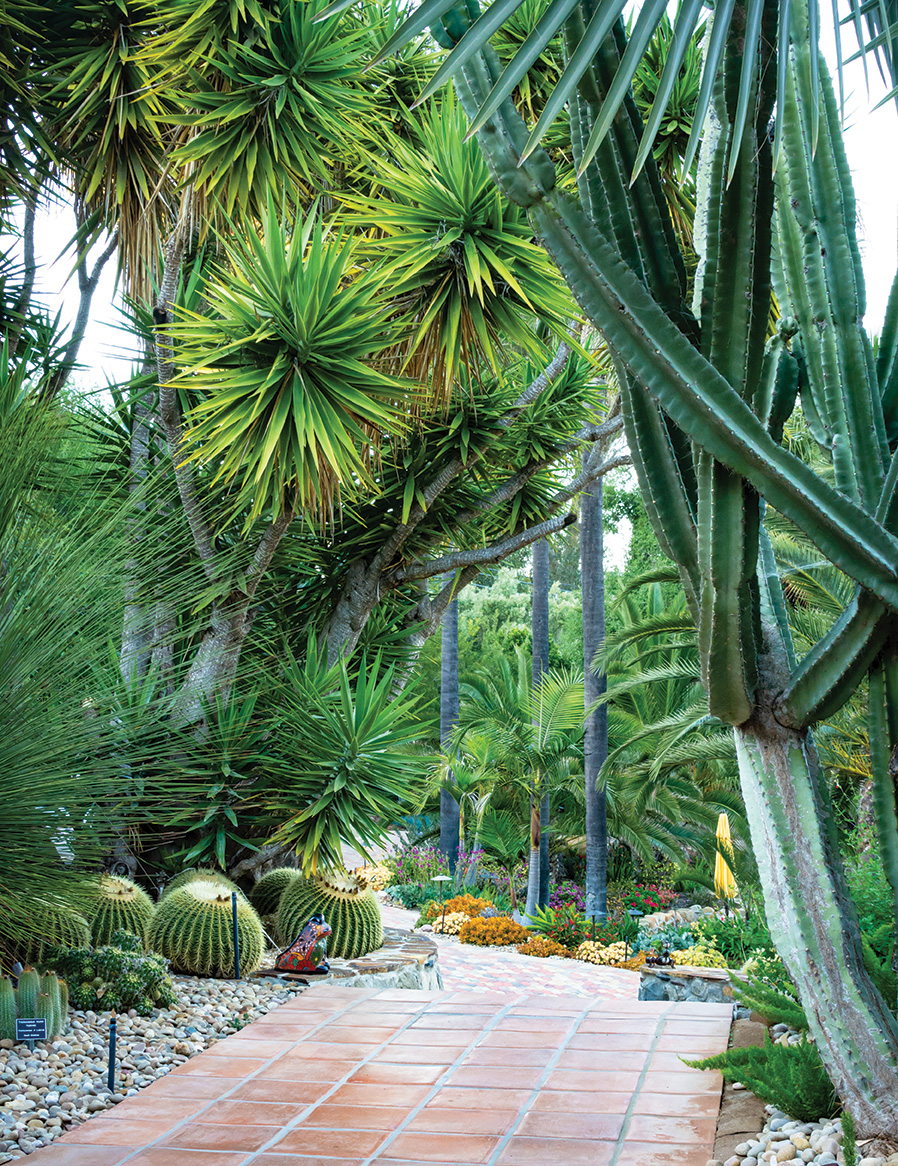 A tile walkway to the front door showcases the long arms of a Peruvian apple cactus, a multi-trunked giant yucca and icy blue Bismark palm fronds.

Two years ago, as he searched for space to shelter his 13 cars, Jeff drove up the long driveway to Hidden Lake Ranch where a 1926 adobe looked out over century-old oaks to the dusky peaks ringing Lake Hodges. It was a perfect pairing of provenance and possibilities for the collector and history buff. “I instantly fell in love with the place,” he says. 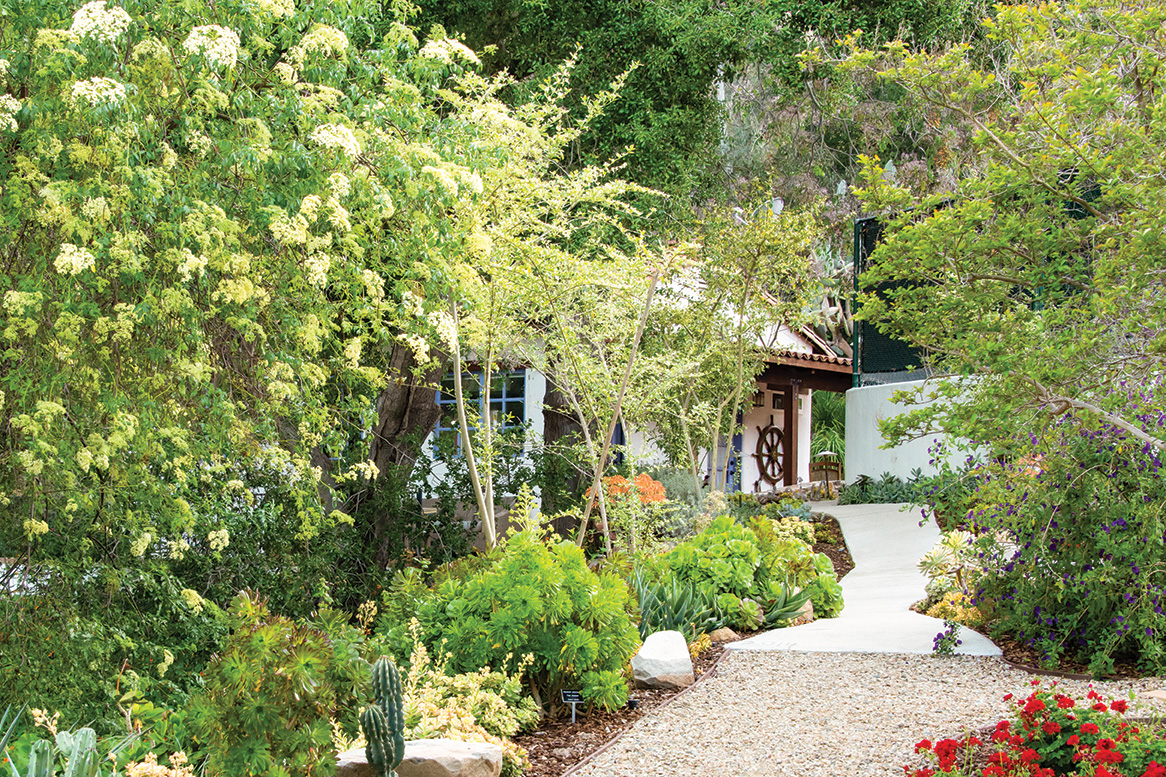 Light-catching variegated skyflowers and a variety of colorful aeoniums mix with California natives along a path to the tennis courts.

When he showed the grounds to his mother, English-born Tessa Phillips, she noticed the home’s resemblance to his grandfather’s farm in Dixon, California. “She was right—I’m sure it reminded me of visits there,” Jeff says. “My mom loved gardens and really loved this one. She left us earlier this year. Because of her, there will always be a rose garden here.” 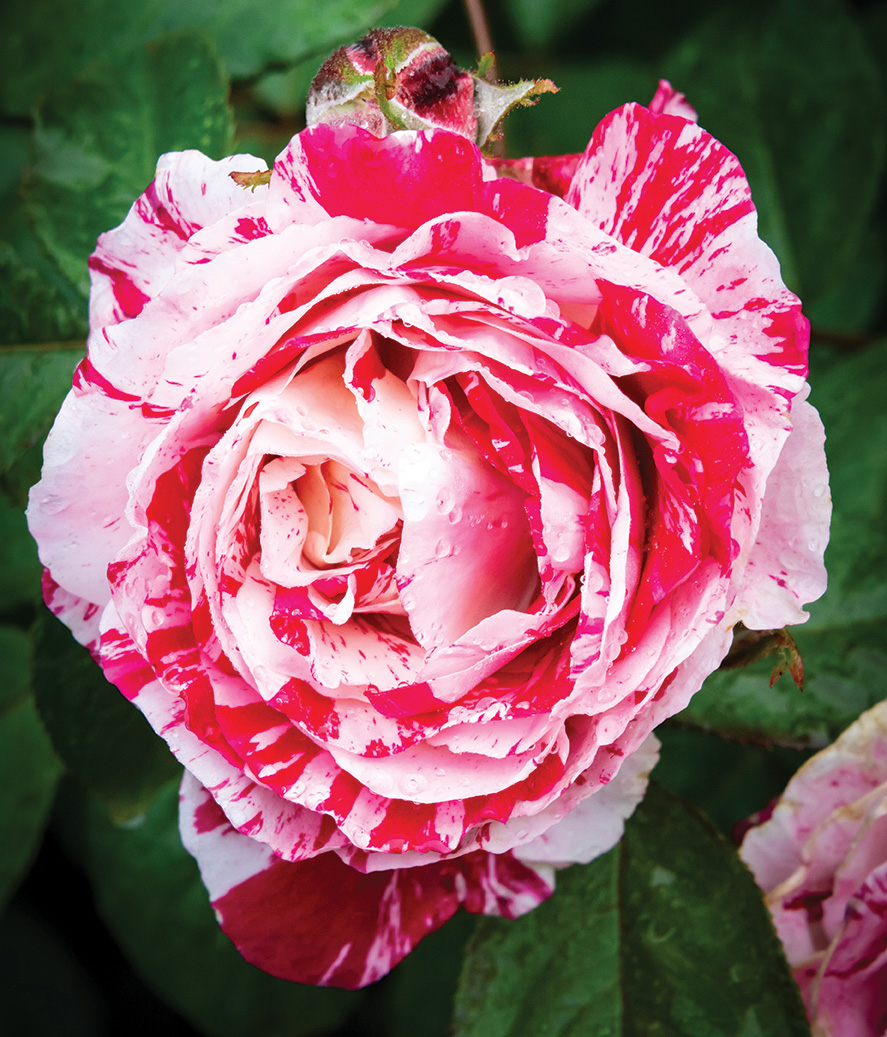 After purchasing the 6-acre ranch, Jeff delved deep into its history, and discovered another link to his Northern California roots. The home’s two wall plaques and original red tile roof are vintage Gladding, McBean, the venerable clay-products maker based a few miles from Yuba City.

The 1920s-era tiles count among the adobe’s many Spanish Revival details picked by its builder, a Gladding, McBean geologist captivated by similar residences rising in then-nascent Rancho Santa Fe. Over the years, subsequent owners stayed true to the home’s origins while expanding and updating it, adding a pool and tennis courts and cultivating gardens, some now dominated by decades-old towering succulents and palms. 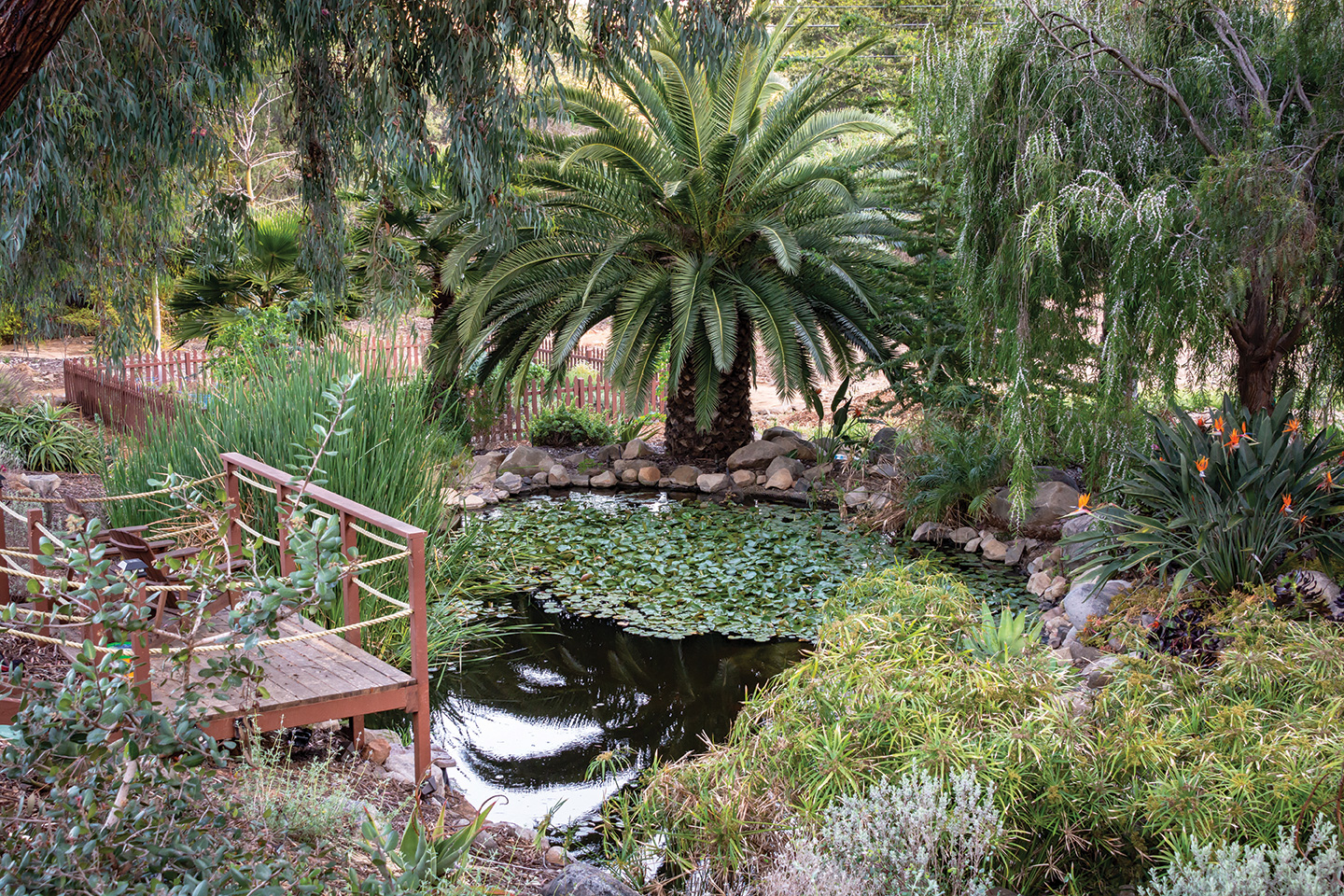 Koi and goldflish can be viewed from the platform as they mingle in a lily-blanketed pond. The stout-trunked Canary Island date palm is one of several in the landscape.

Among Jeff’s first additions was a vintage Gladding, McBean blue-glazed fountain of a boy and fish that now anchors a new garden outside the home’s bedroom wing. “It’s my favorite spot to relax,” Jeff says of the flower-filled nook created by Steven Anthony, the veteran Vista landscape designer he tapped to rejuvenate the grounds. 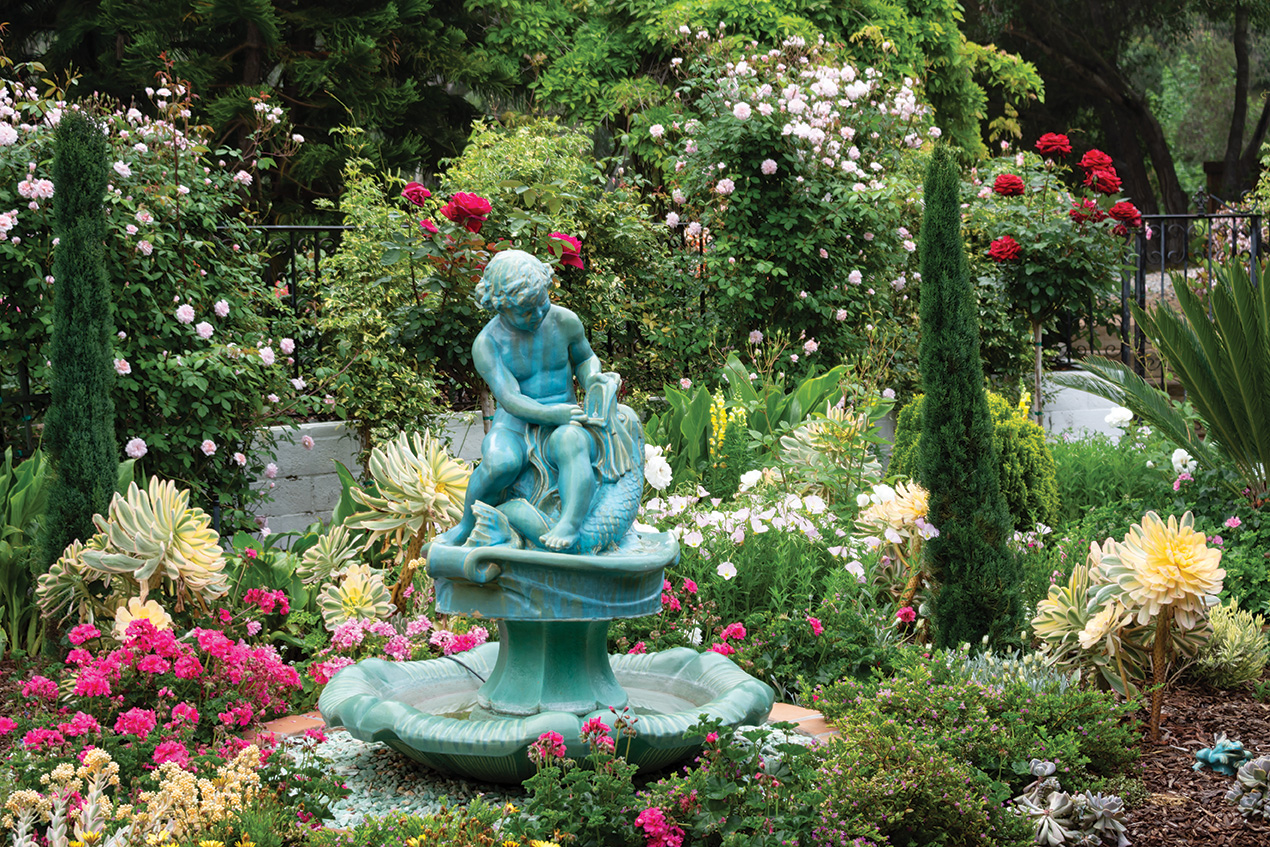 “The gardens were having a bad hair day, if you know what I mean,” Jeff says with a laugh. “Things needed cleaning up, but I didn’t want a country-club look.” He applauds Steven’s fusion style that blends period and native gardens with classical and contemporary influences. “I like that mix,” Jeff explains, “and that we kept so much of what was already here.”

Improvements began with new irrigation, three miles of pipes to carry well water to existing and newly landscaped areas. Steep stone stairs that climbed the sloped property were linked with decomposed granite paths and wood bridges across canyons and washes to create a meandering trail Jeff walks daily with his rescue dog Oscar. “Any time of day, any time of year, it’s beautiful,” he says. “But I really enjoy early evening when the sun is going down and the hills around Lake Hodges change colors.” 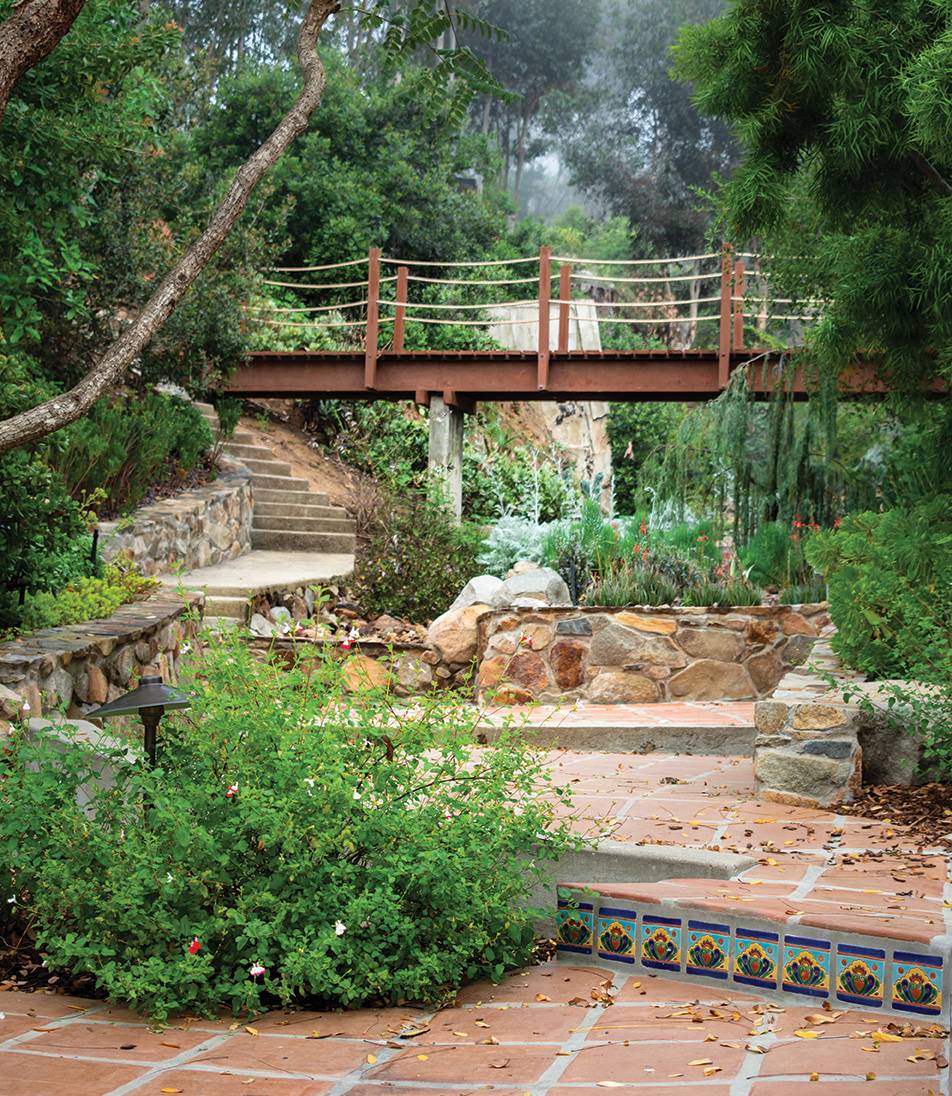 Together, lifelong plant pro Steven and horticultural newbie Jeff enhanced the landscape with “tons of choice plants,” all labeled with engraved brass signs. “It’s the Disneyland effect,” Steven says of the dozen themed gardens that now surround the estate. “You go from one area to another, and it looks different, feels different. I like that there are surprises around every corner.”

Two of Jeff’s favorites hug areas near the outdoor kitchen and fire pit, a popular spot for family gatherings especially in cool months when Jeff, his wife Kim, a physical therapist, and teenage daughter Trinity often share s’mores under the stars. Above the patio, silvery spires of South American cacti poke above swaths of coast rosemary and aeoniums and a recirculating stream splashes over rusty rocks gleaned on site. Orchid trees, grevilleas and tree ferns stand out among other showy accents here. 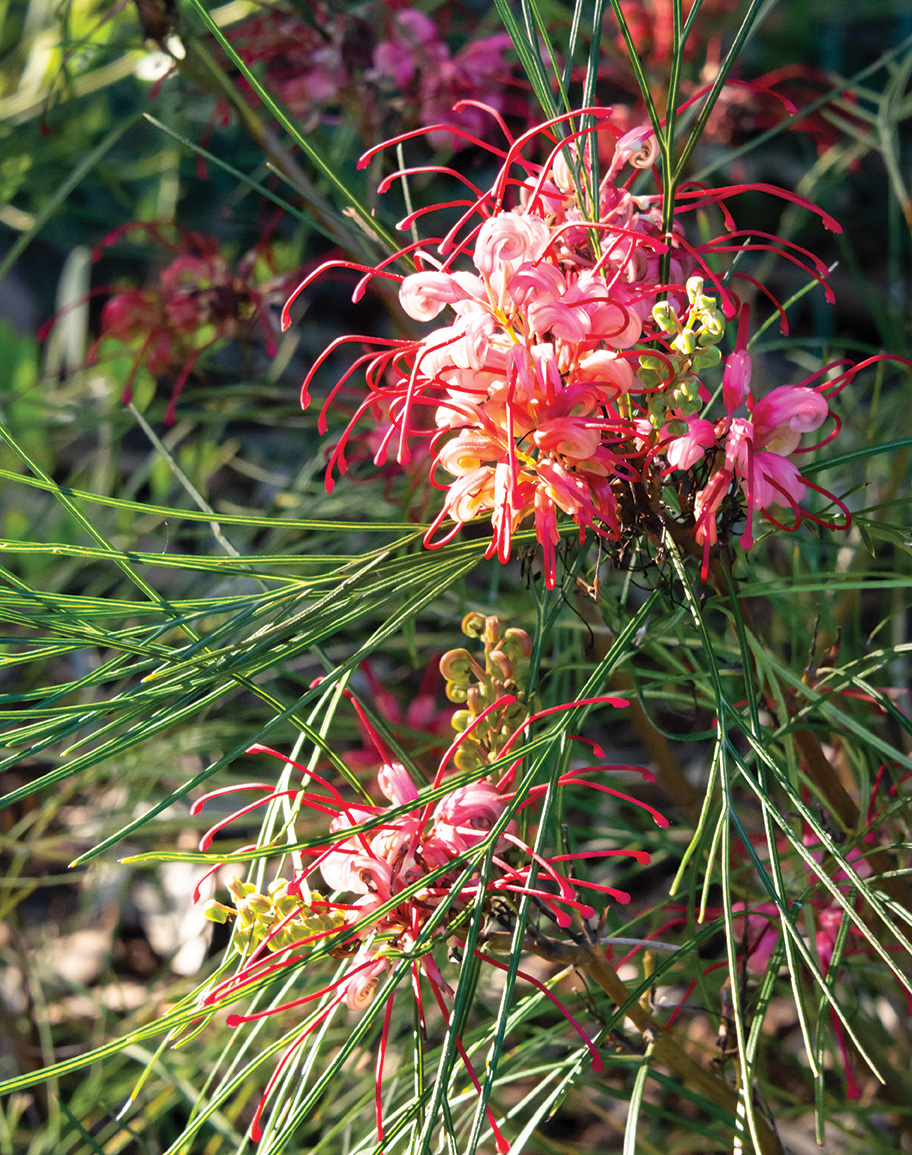 ‘Long John’ grevillea blooms in the garden above the outdoor kitchen.

A few steps away is the Moonlight Garden, where white, silver and pale blue plants including ghost agave, matilija poppies and a ‘Tolleson’s Blue’ weeping juniper are magnets for moonbeams. “This garden just glows after dark,” Jeff says. 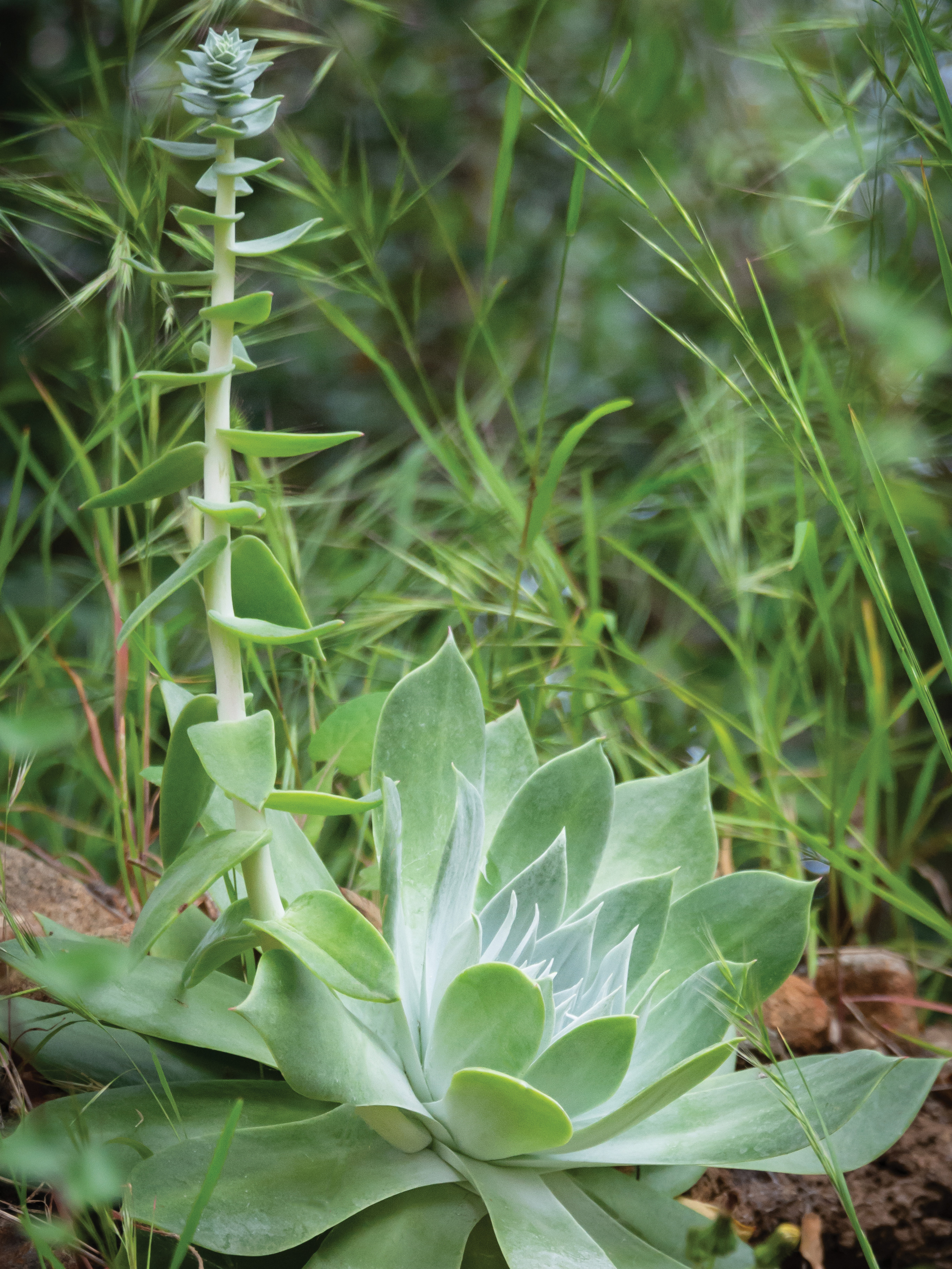 Steven also fine tuned entry gardens, adding more chubby gold barrel cacti and ribbons of ‘Hot Lips’ sage and Mexican fountain grass to sloped beds alongside stairs from the driveway to the front door. Nearby the weathered Hidden Lake Ranch sign that once heralded the property entrance, is the centerpiece of a bed backed by a trio of palms, burgundy flax, pale green euphorbias and stiff dasylirion globes. 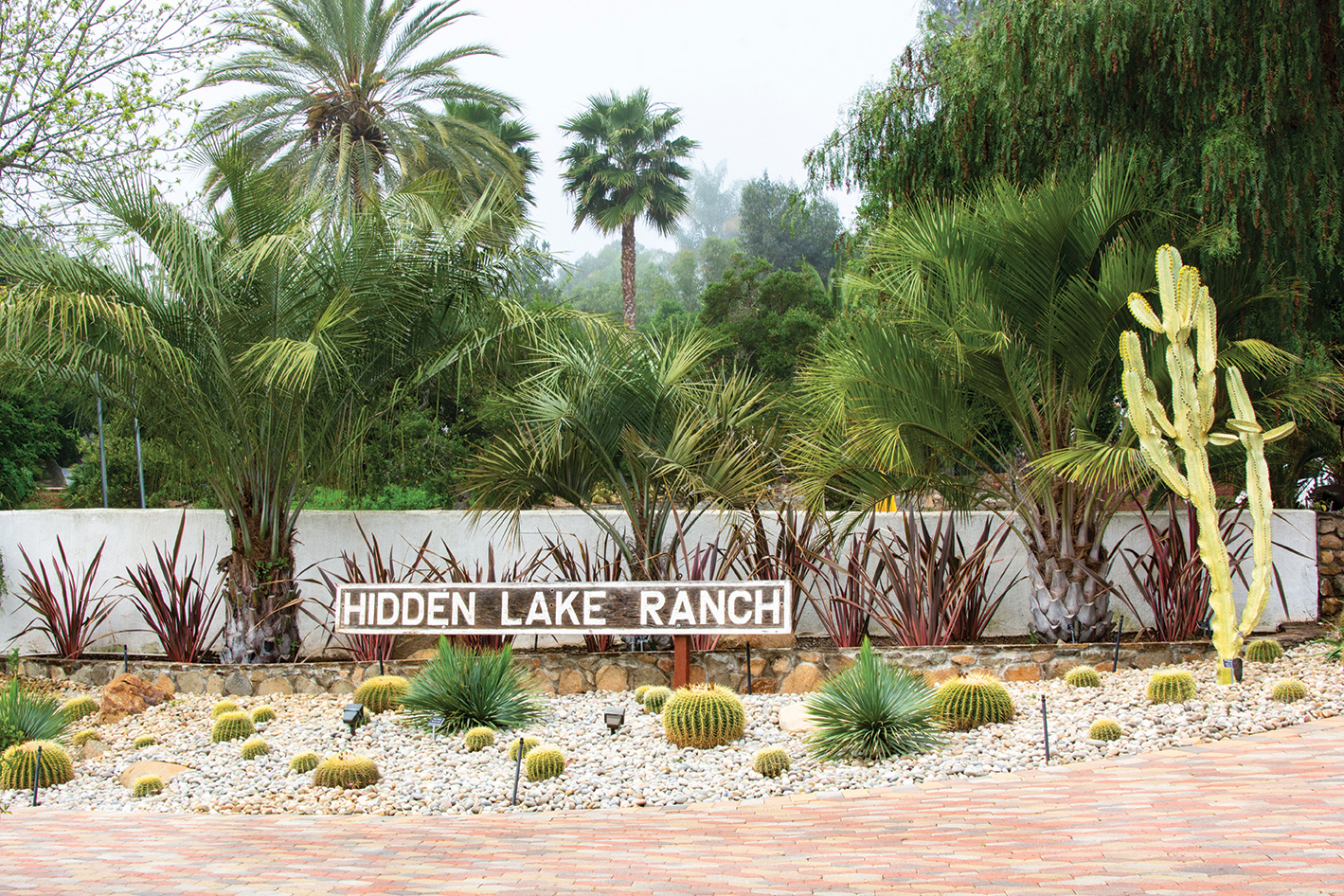 Further down the driveway, swings, added at Kim’s request, sway from branches of a majestic oak thought to be more than 150 years old. Circling it are a dozen rare crown of thorns hybrids, cultivated over decades by Steven in a quest for large flowers and lush foliage. Also in the mix are stout Canary Island palms likely planted in the 1950s. 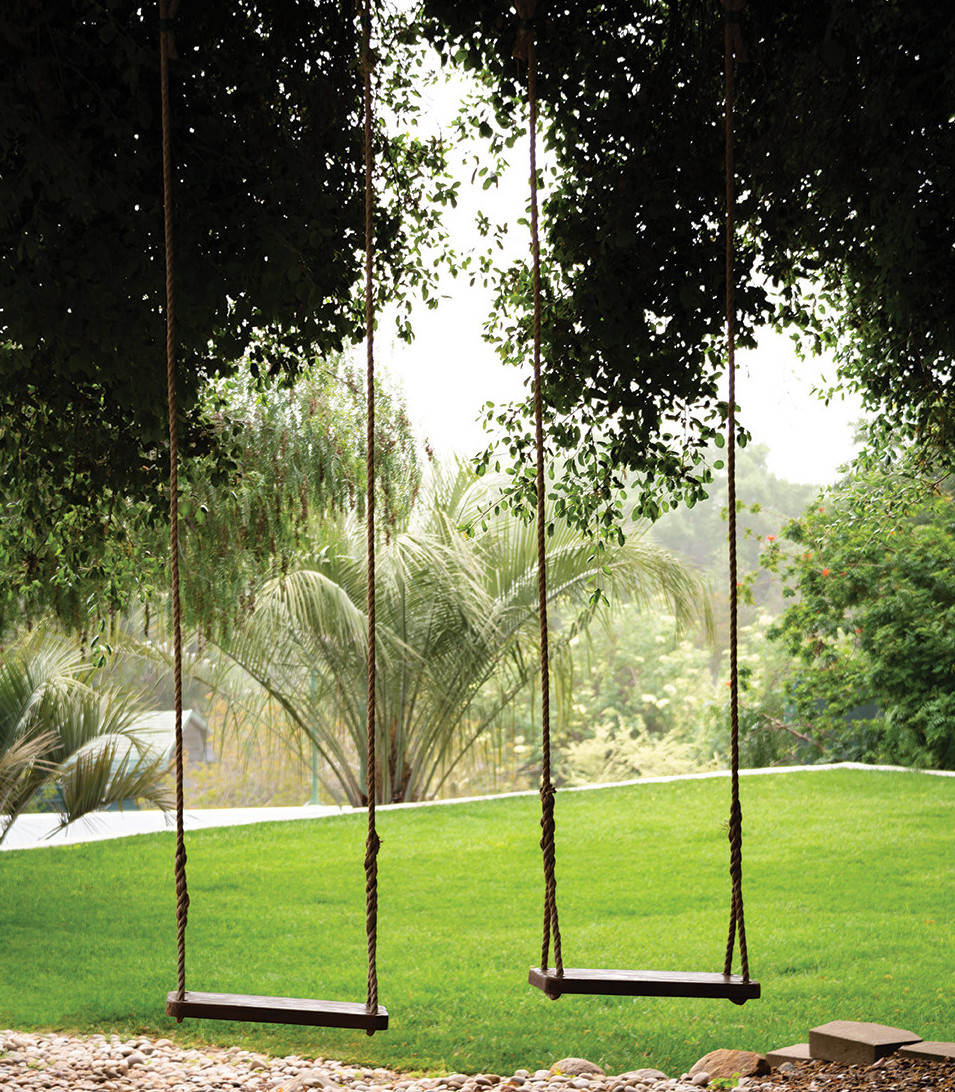 Another walkway here heads west into Steven’s favorite area—an undisturbed nativescape and haven for wildlife that he calls the California Conservation Garden. During the rainy season, when runoff gushes through, Jeff and Kim savor bird’s eye views from a new yoga platform perched above the rocky gully. “We’re really happy to be the current caretakers here,” Jeff says. “And when the time comes to hand off the property to the next owner, I hope we’ll be remembered for what we did in the spirit of this remarkable place.” 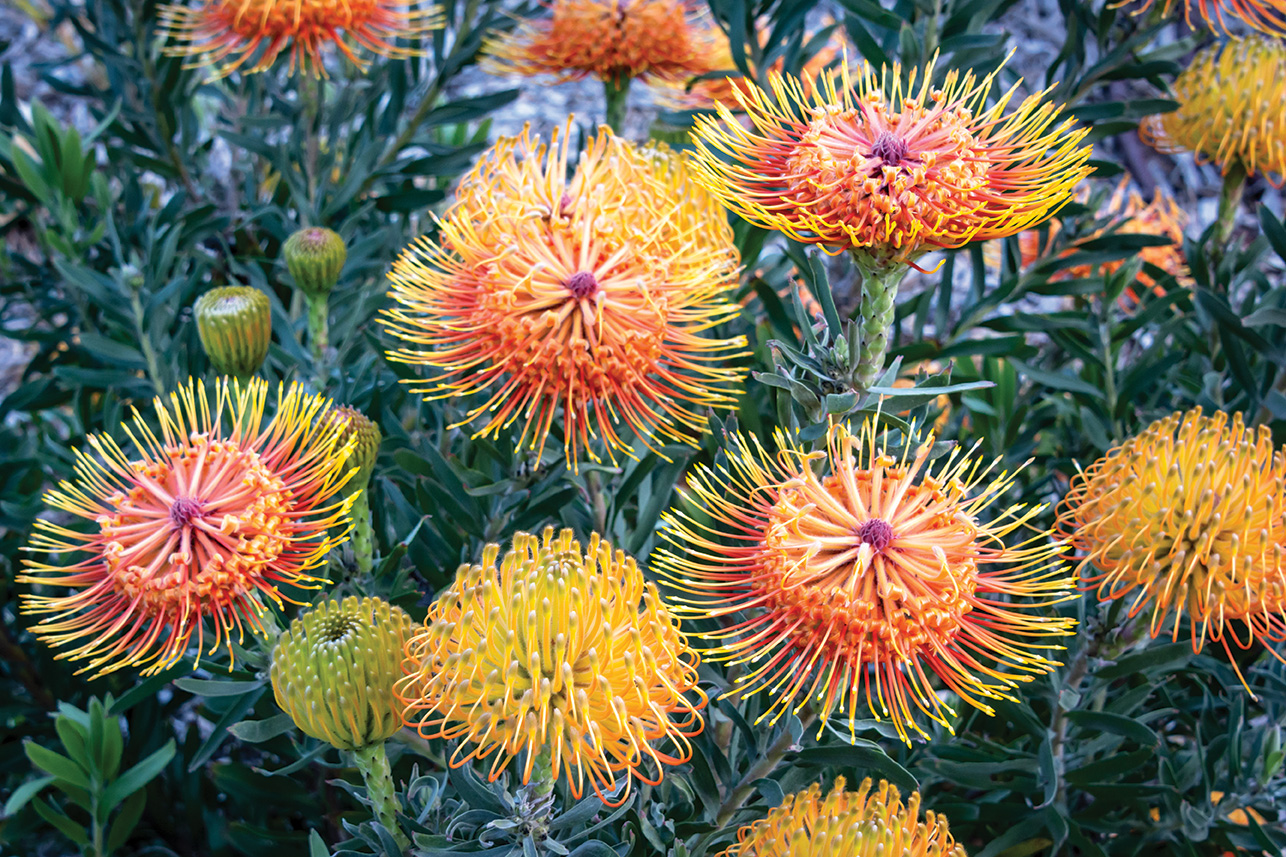