Gardens of the Year: Tiers of Joy 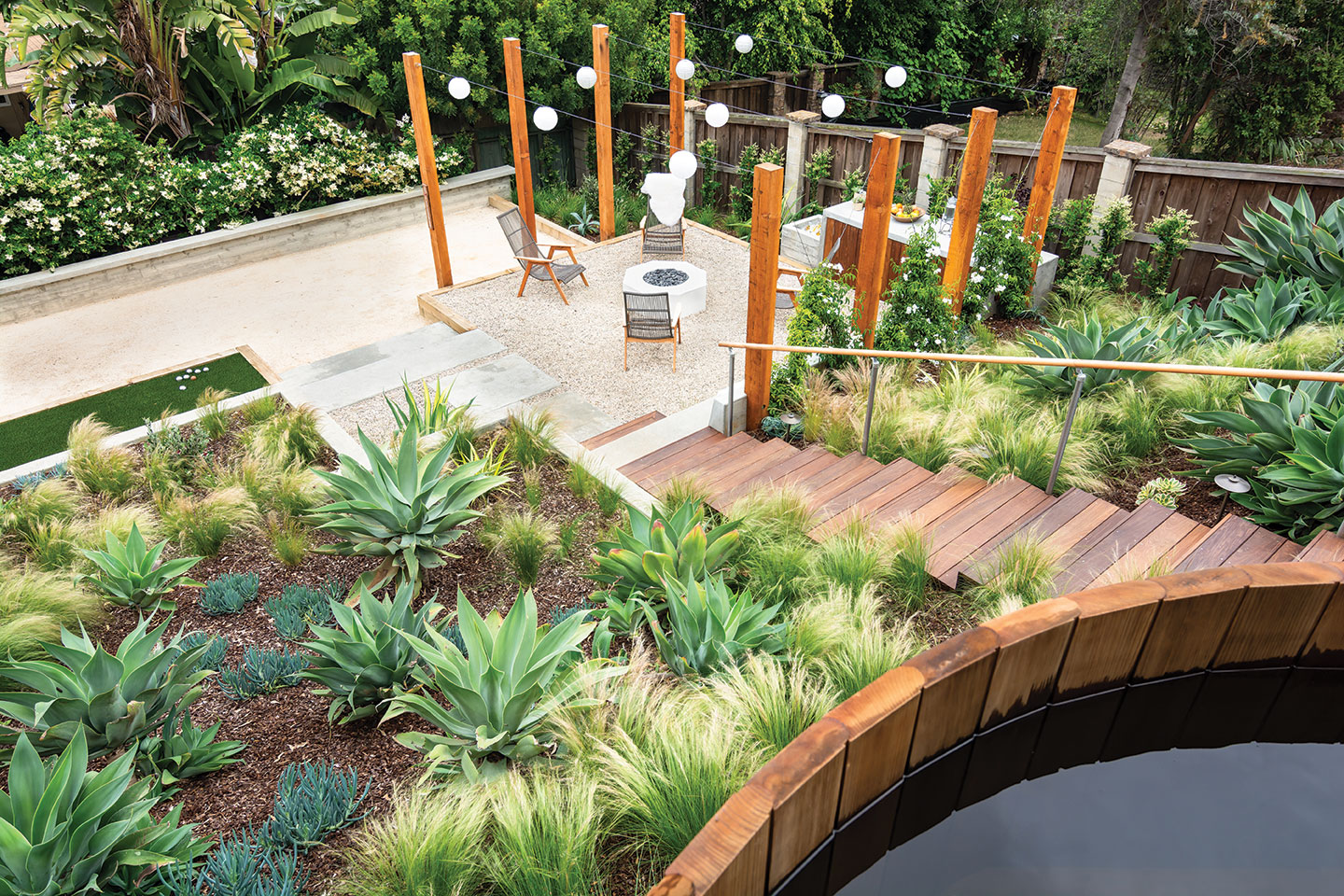 Best sloped-yard solution: To capture more usable space for a family of six, Brooks Crawford of Brookside Design added a deck and a jacuzzi to a challenging slope area, creating a tiered garden.

When Carlsbad couple Becky and John Wentland looked at their bare, sloped backyard, they weren’t quite sure what to do with it. For starters, they have two children, an 11-year-old daughter and 15-year-old-son, as well as aging parents. Therefore, safety and accessibility were chief concerns but the duo also wanted something beautiful and waterwise.

Becky, who is a schoolteacher, and John, an engineer, turned to the internet and quickly came upon Brooks Crawford, owner of Brookside Design.

“Our project required some careful thought because it was just a big overgrown slope,” Becky says. “But his design was so perfect, we never even talked to another landscape designer. We just asked him when he could start.”

“This property offers a fun variety of living spaces throughout the yard. It beckons one to enjoy and relax.” — judge Barb Whelan.

Brooks recalled a similar kismet meeting, adding that he had just started his company and couldn’t believe he already had walk-in clients that were not only ready to go but clients with whom he had an immediate rapport. He was also particularly excited because of the home’s location—to him, the house is on one of the best streets in town and he was thrilled to have a blank slate as his first project.

For Brooks, the first order of business was to tackle the slope, which in its unruly state seemed abstract and inconceivable to the Wentlands. Brooks tossed around the idea of adding a custom jacuzzi, which wasn’t originally on the couple’s wish list and not a concept everyone loved. “I hesitated to install a hot tub because I am not a fan of the way many of them look,” Becky admits. 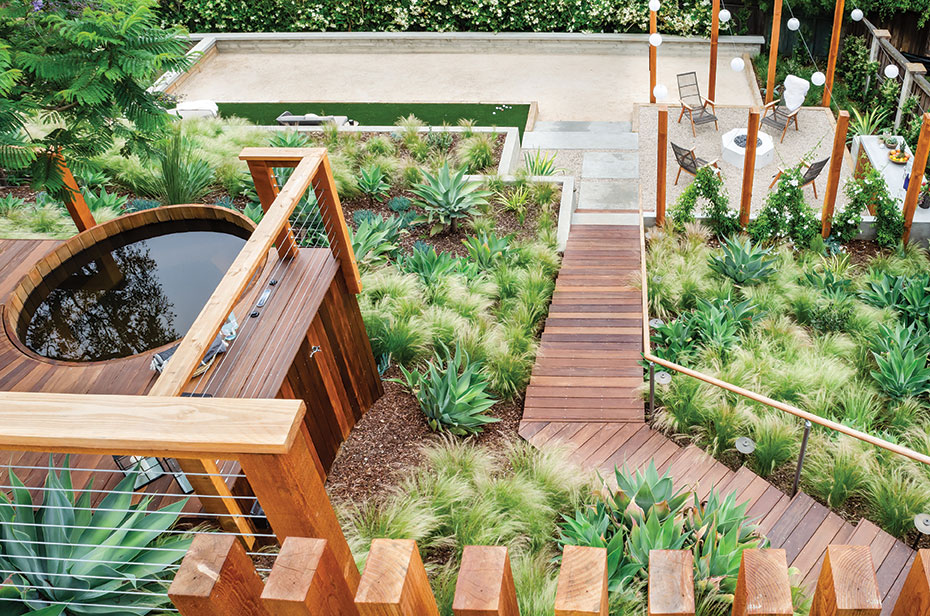 Brooks created a cedar spa within an ipe deck for this area of the garden’s slope. A cedar and stainless-steel rail provides safety.

Brooks convinced her this one would be different and ordered a cedar-planked version that was delivered piecemeal and had to be assembled by hand, a challenge that Brooks and the couple tackled together—led by John, who was able to use his engineering expertise.

He also decided to make the jacuzzi a key landscape feature, bisecting the top and bottom part of the slope and installing it in the middle of the hill. 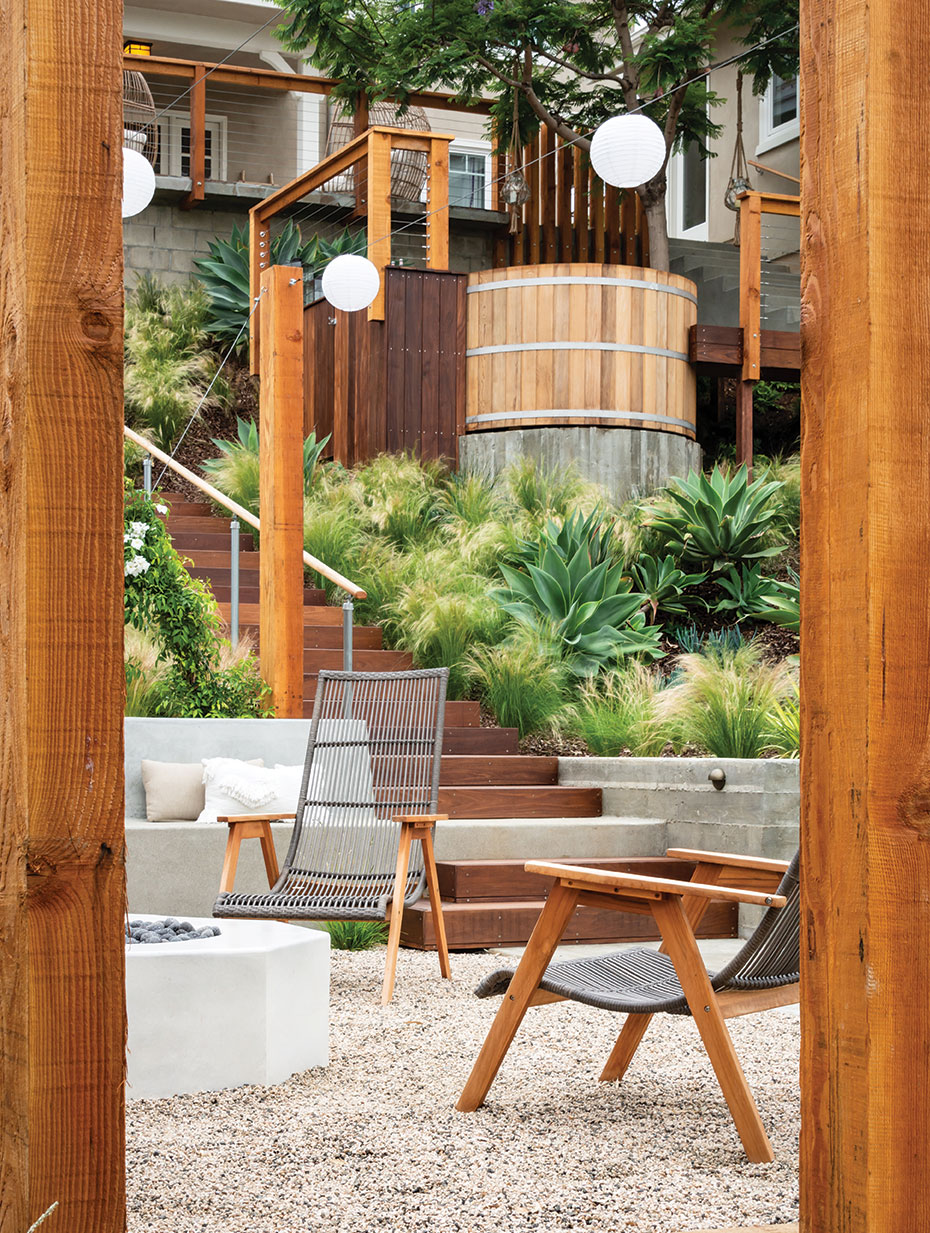 The entire family spends a lot more time outside now.

“What’s really common is when people have a slope, it’s easy to be really binary about it,” Brooks explains. “You can use the top of the slope and the bottom but the things in between are just tough to visualize. I don’t want to take too much credit—the property really lent itself to a little staircase that went down along the casita. It gave the ability to build a deck and large jacuzzi in the middle of the slope. That allowed them to capture more usable space.”

The jacuzzi platform and accompanying staircase also added literal layers of accessibility for both the kids and the Wentland’s parents, making more of the yard’s space livable while providing a safe and fluid path from the top of the yard to its bottom. 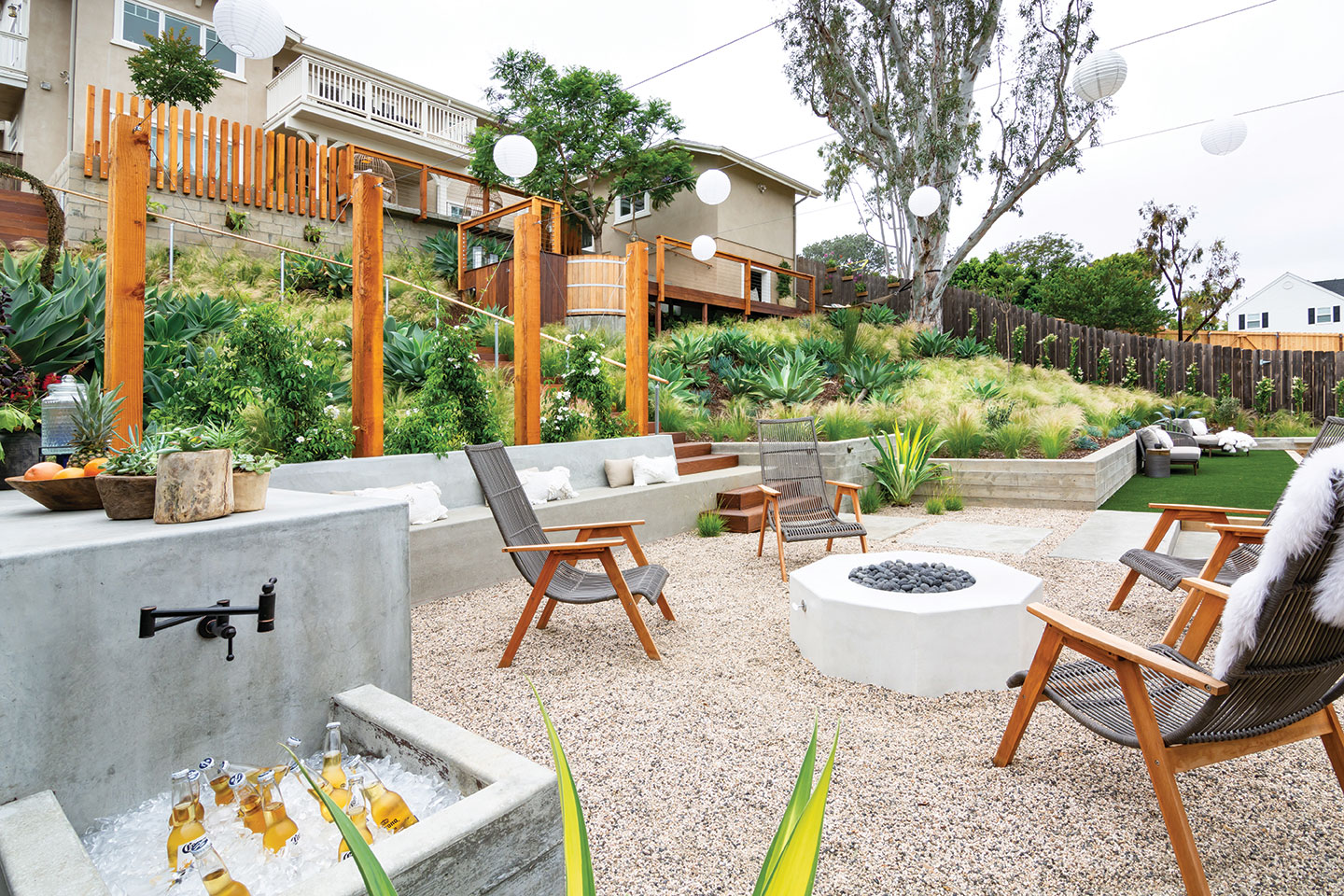 For Brooks, the tub’s inclusion has a philosophical importance as well as a practical one. “The world is becoming so much more artificial and manufactured,” he explains. “And with this jacuzzi, you’re sitting on real wood like it would have been back in the day when, if you wanted a warm tub of water, it may have been assembled out of wood, and you would have heated the water yourself, poured it in and soaked. That’s the way this tub works. It’s such an authentic, natural experience that doesn’t require chemicals.”

Becky and John were pleasantly surprised by the results, noting that it has become their favorite feature in the yard and that the entire family spends much more time outside now. 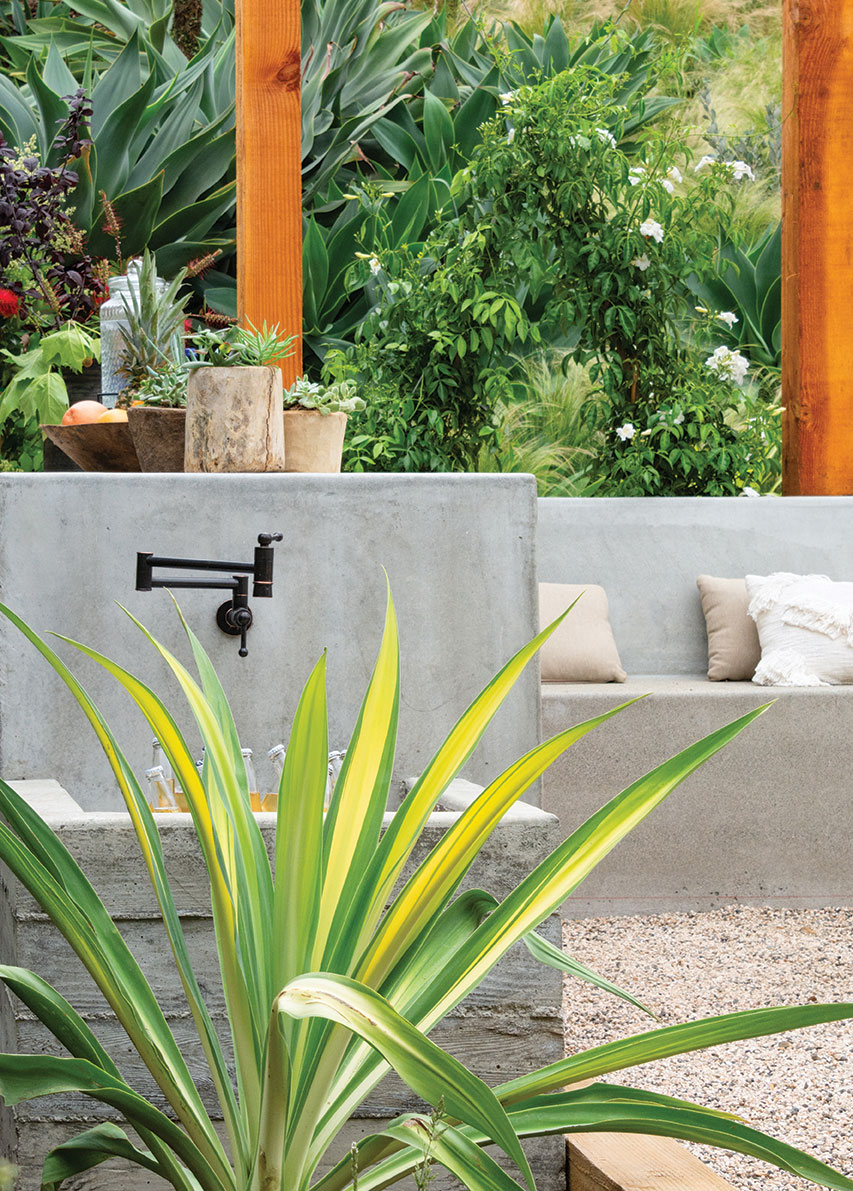 Such surprises have become the hallmark of this challenging property. With a forward-looking view, Brooks installed other features that will develop over time. The couple wanted a yard for their forever home that they could grow with while living in, so Brooks made sure to incorporate that philosophy into the property’s design.

“At the lower level Becky gave me a challenge. She said, ‘I really want to have privacy. I really want to have an overhead feel but I don’t want umbrellas or a wooden pergola.’ So, at the lower level, we installed four giant cedar posts on either side of the lower fire pit area and strung cables across it. And when the vines we planted grow up and over that lower area, it’s going to be absolutely magical,” Brooks explains. 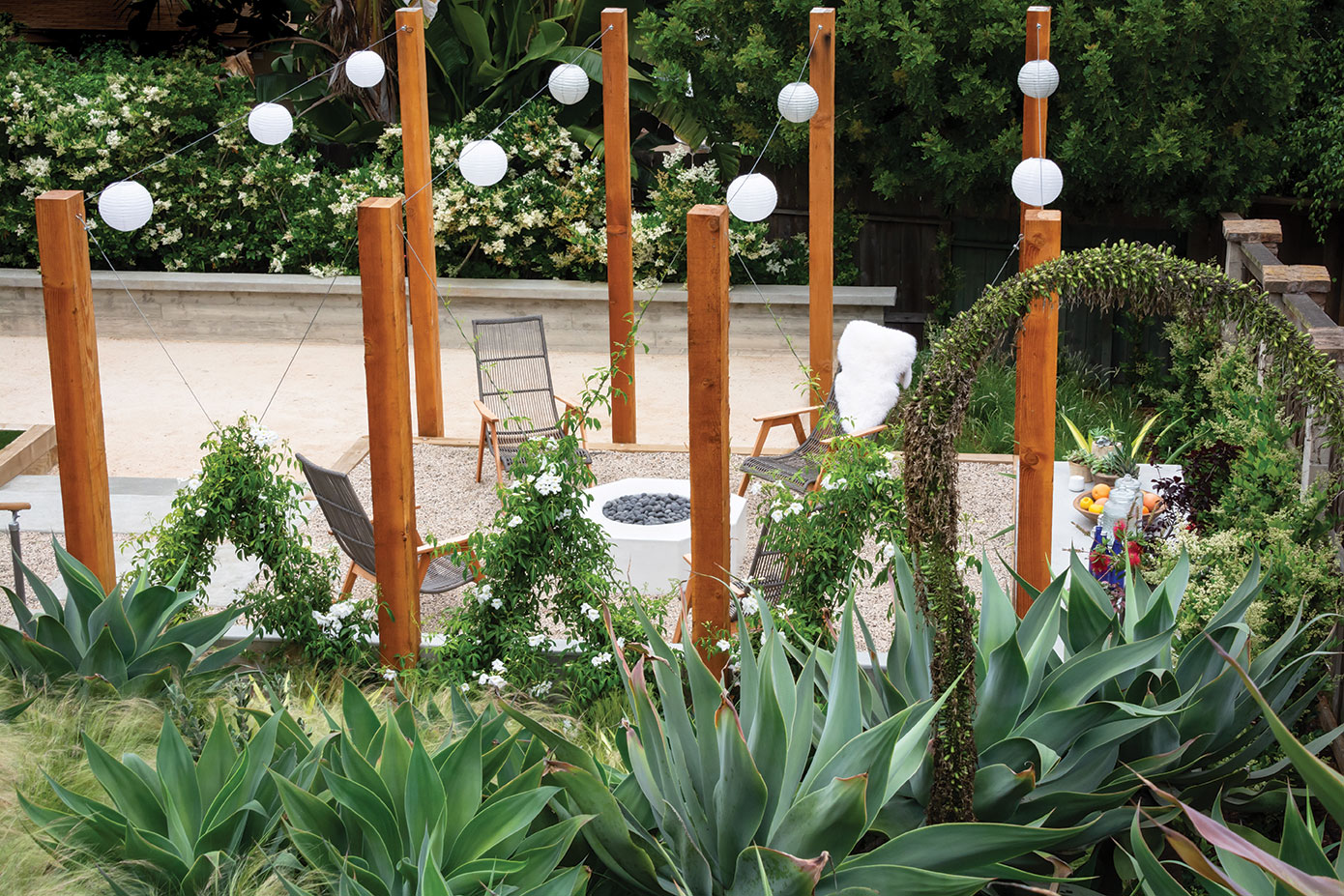 A room-to-grow system of cedar posts, cables and vines will become a shade pergola around the fire pit as the vines grow.

Another challenge included fencing the upper level, which Brooks says lacked space so they needed to get creative with maximization while retaining a minimalist feel and still maintaining safety and privacy.

“When you build a fence you sacrifice square footage every single inch that you move inward to build it,” Brooks says. To prevent taking up any space, Brooks created privacy by attaching 4-by-6-inch cedar posts vertically into a cinderblock wall. “It’s durable and minimalist,” he adds. 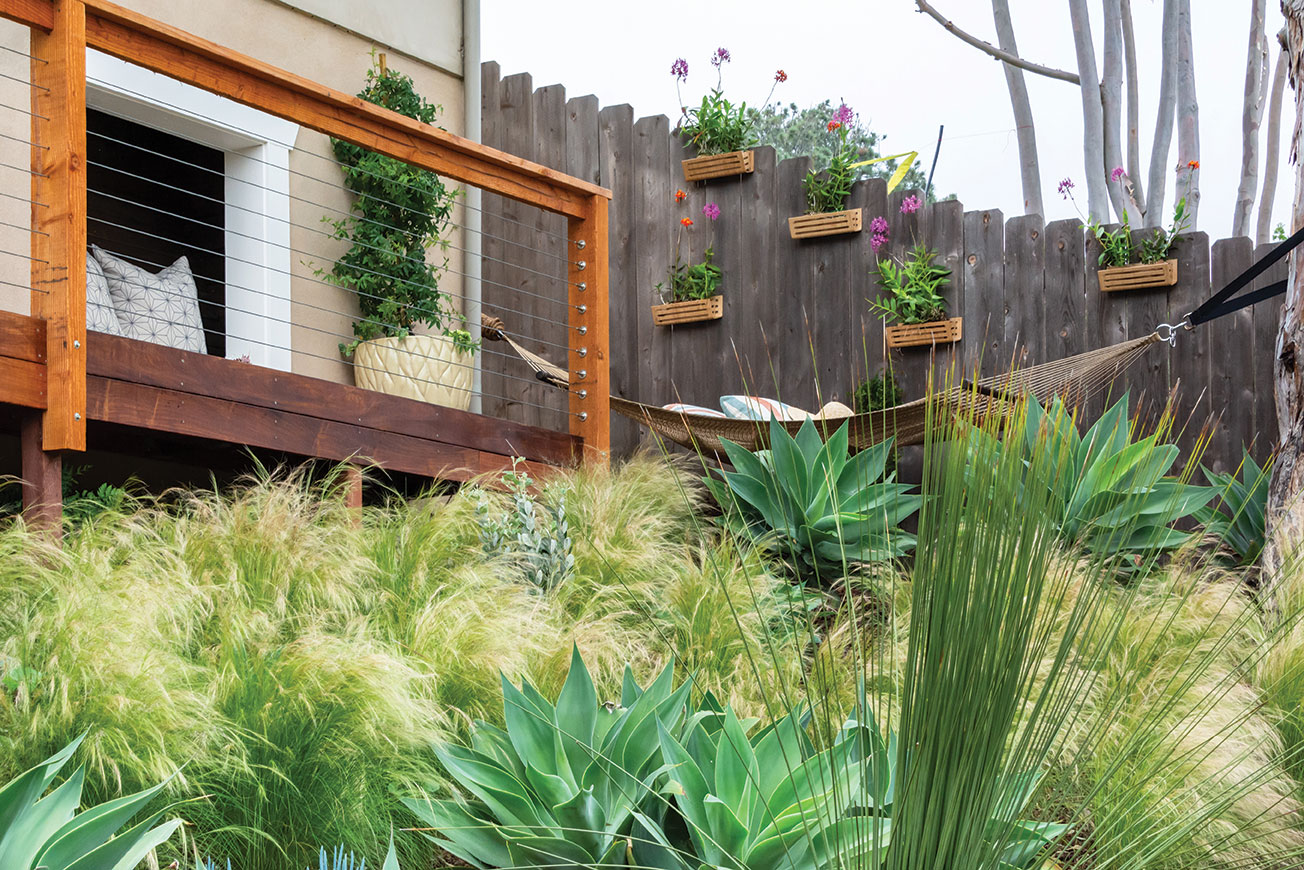 A hammock strung between giant eucalyptus is perfect for lazing but some prefer nesting among the toss pillows in a reading nook.

As for botany, the Wentlands were passionate about keeping and improving on the waterwise plant life that already existed in their yard. They had plenty of agaves and feathergrass, and to that, they added pineapple guava and crepe myrtle trees. Brooks dotted the entire property with succulents, including around the outdoor shower.

Lastly, he added in a few seemingly small features for the other family members that have had huge impact.

“We told him our daughter loved to read, so he created a little nook for her [off the jacuzzi deck] that has become one of her favorite spaces,” Becky says. 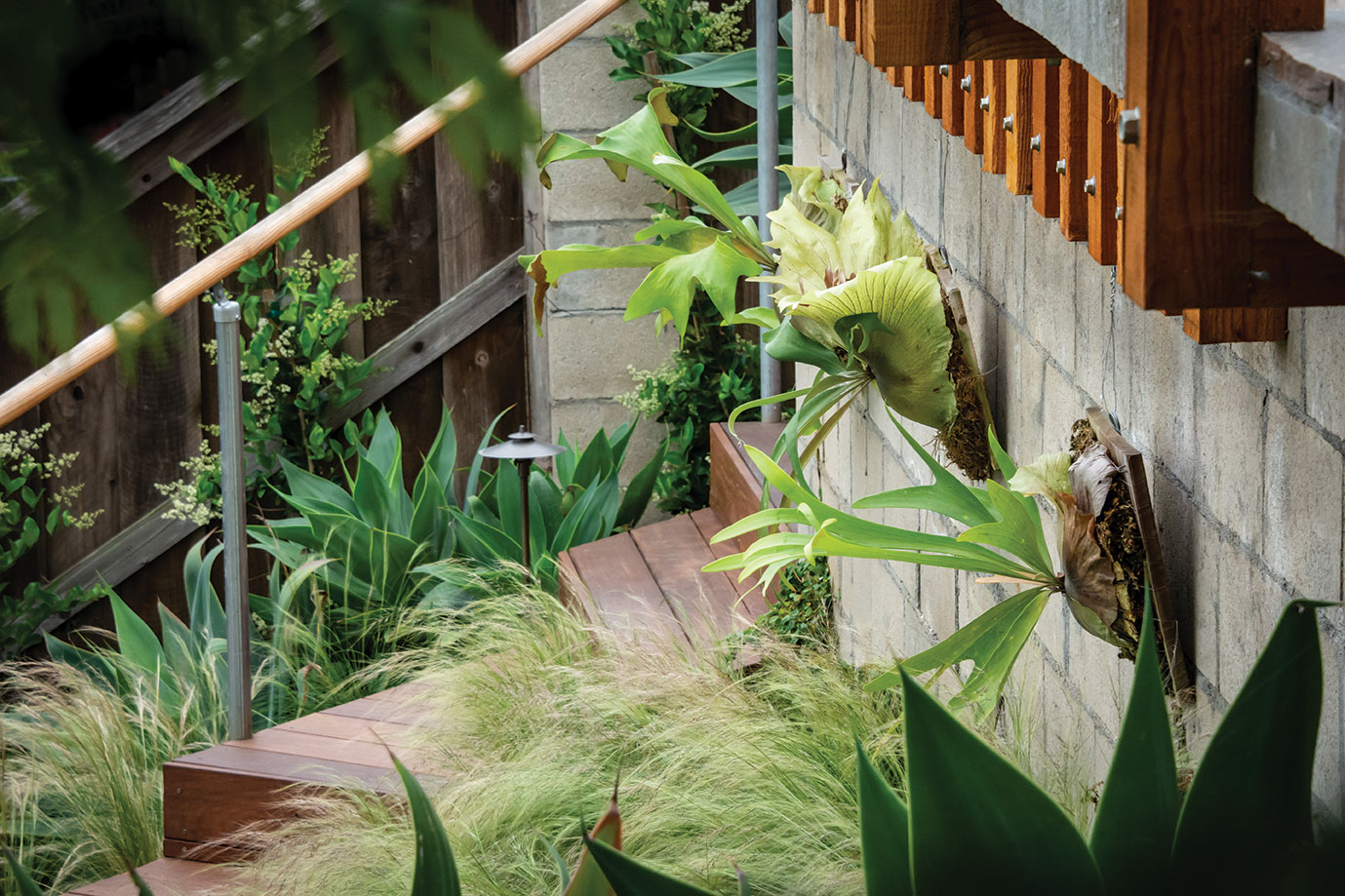 “We also asked him to make sure the yard had handrails throughout because our parents spend a lot of time here and we need them to navigate the stairs. He worked really hard to find a sturdy railing solution that also looks nice.”

A pétanque court was also installed, which has been a favorite of the kids, who use it every weekend. 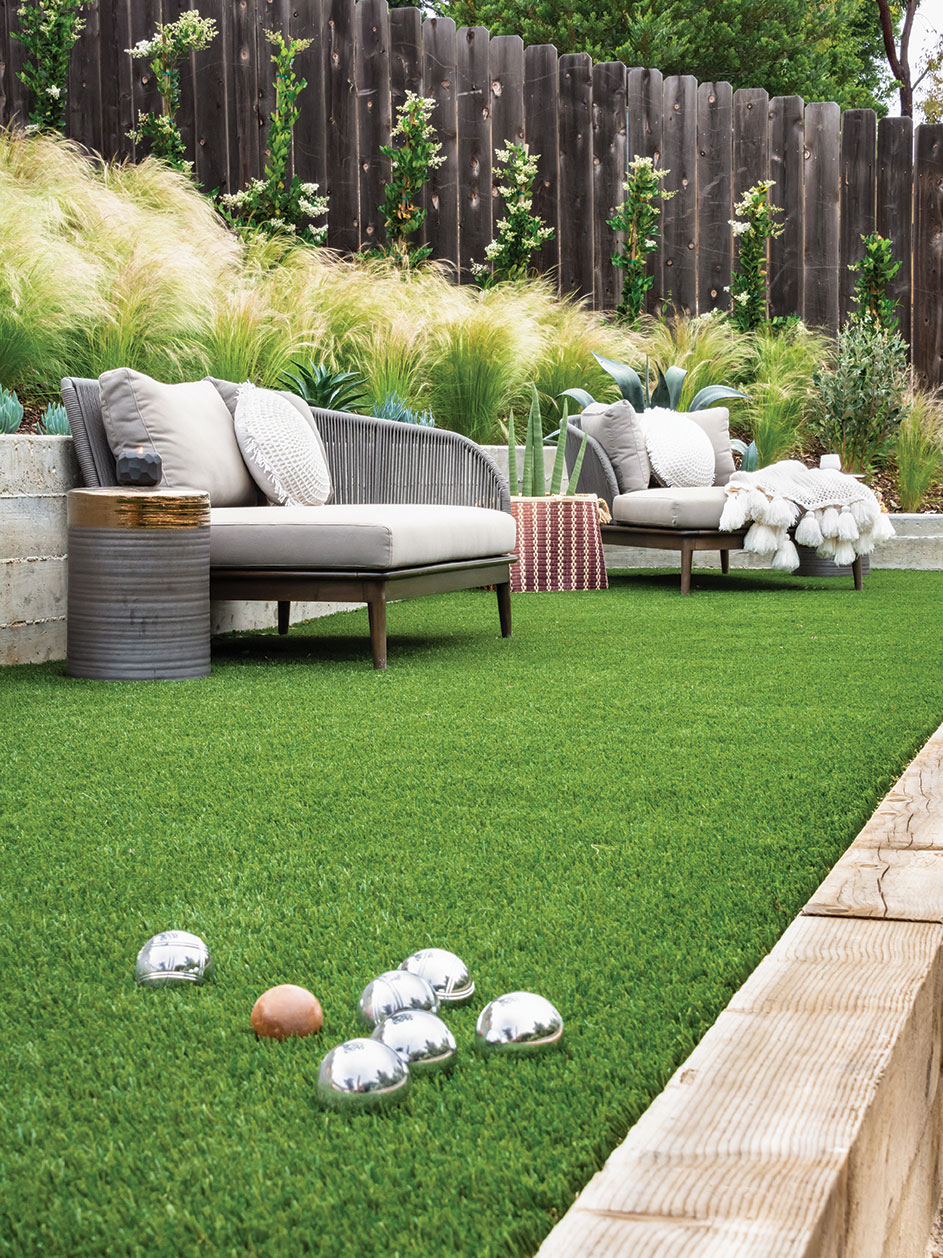 One of the lower tiers is perfect for pétanque (or lounging).

Becky and John regularly convene around the fire pit, be it with the kids or with friends for a glass of wine after dinner.

For the Wentlands, they can’t believe they have such a functional space that’s truly beautiful to boot. Becky beams, “I still look at the yard and can’t believe we live here.”

An ipe staircase leads to entertainment areas below.