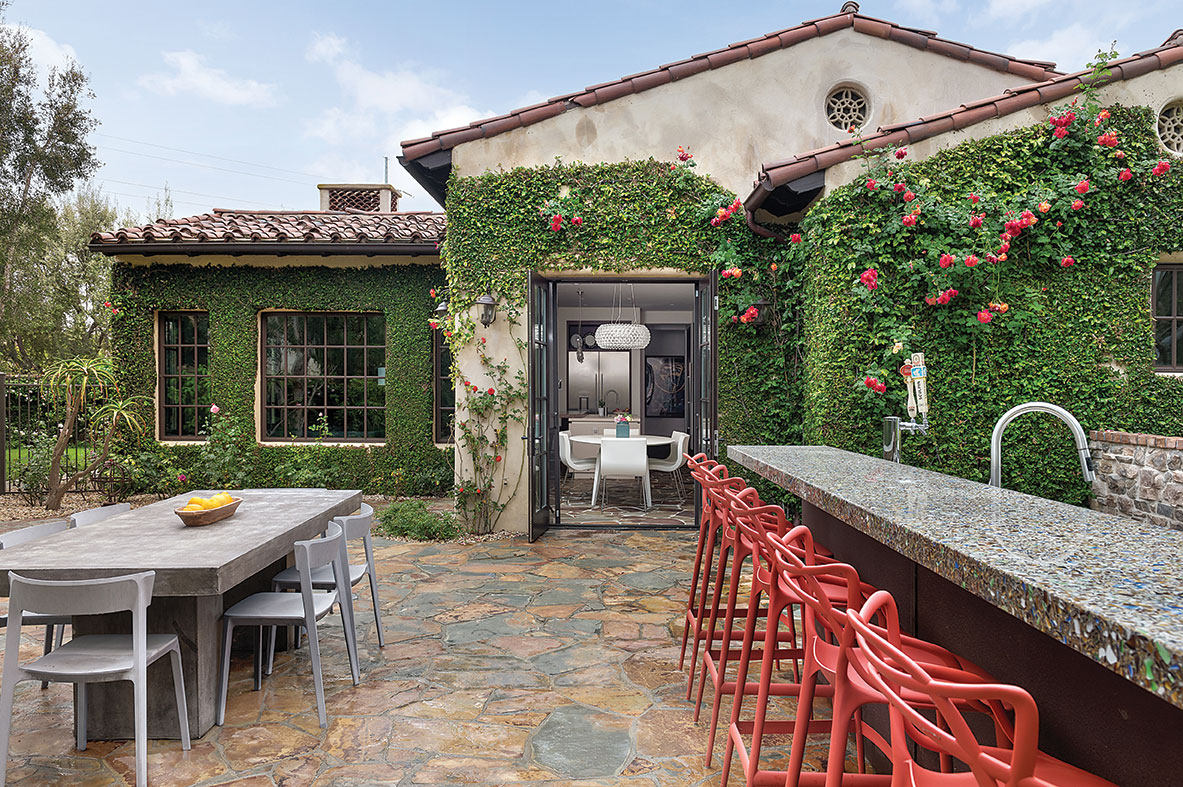 If Michael and Guinevere Koumjian had seen their Rancho Santa Fe estate before Randy Spiegel of Doranco Corp. got his remodeling hands on it, they probably would have run in the other direction. With its sky-high entry door and cathedral-tall ceilings, the home’s Tuscan style had an undeniable grandness. But the original owners’ heavy furniture, thick drapes and layered carpeting, which accentuated the dark, decades-old look, would have made it difficult for Michael and Guinevere to imagine their more contemporary taste melding with all that Tuscan ornateness. 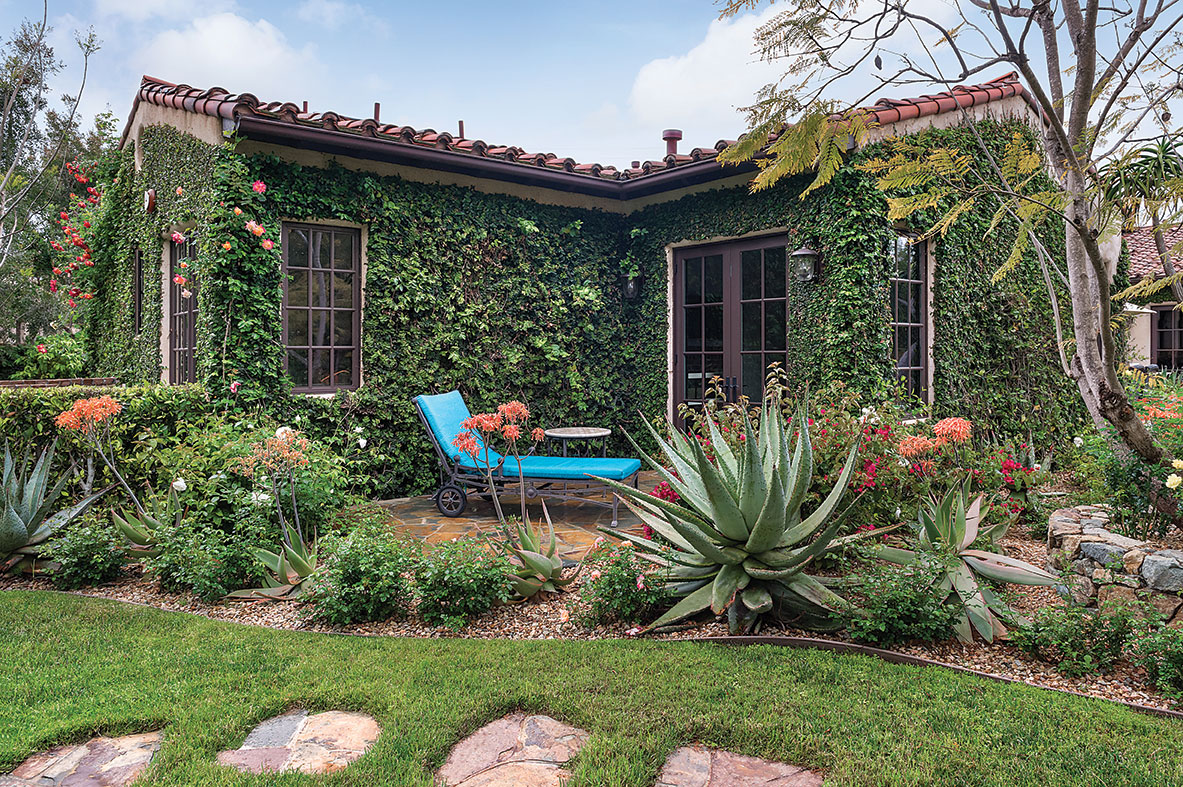 A lounging chaise off the master bedroom is a perfect spot to relax and enjoy the garden. Photo by Samantha Goh.

Luckily, second owners brought in Randy to give the home a more modern interpretation. “In conjunction with those previous owners, we added a modern farmhouse style to the home while keeping the integrity of the Tuscan style,” Randy says. “We switched out all the lighting, tore out heavy fireplace beams, took out shutters and added windows to bring in light, replaced heavy cabinetry, redid the master bathroom and gutted the kitchen down to the studs.”

The major re-do took time but was completed just before Guinevere started thinking  about downsizing from their more than 7,000-square-foot residence, the home where all three of the couple’s children—17-year-old Hailey, 15-year-old Kevin and 12-year-old Kyle—had been raised. Understandably, the tug of family memories made the decision to move a tough one. 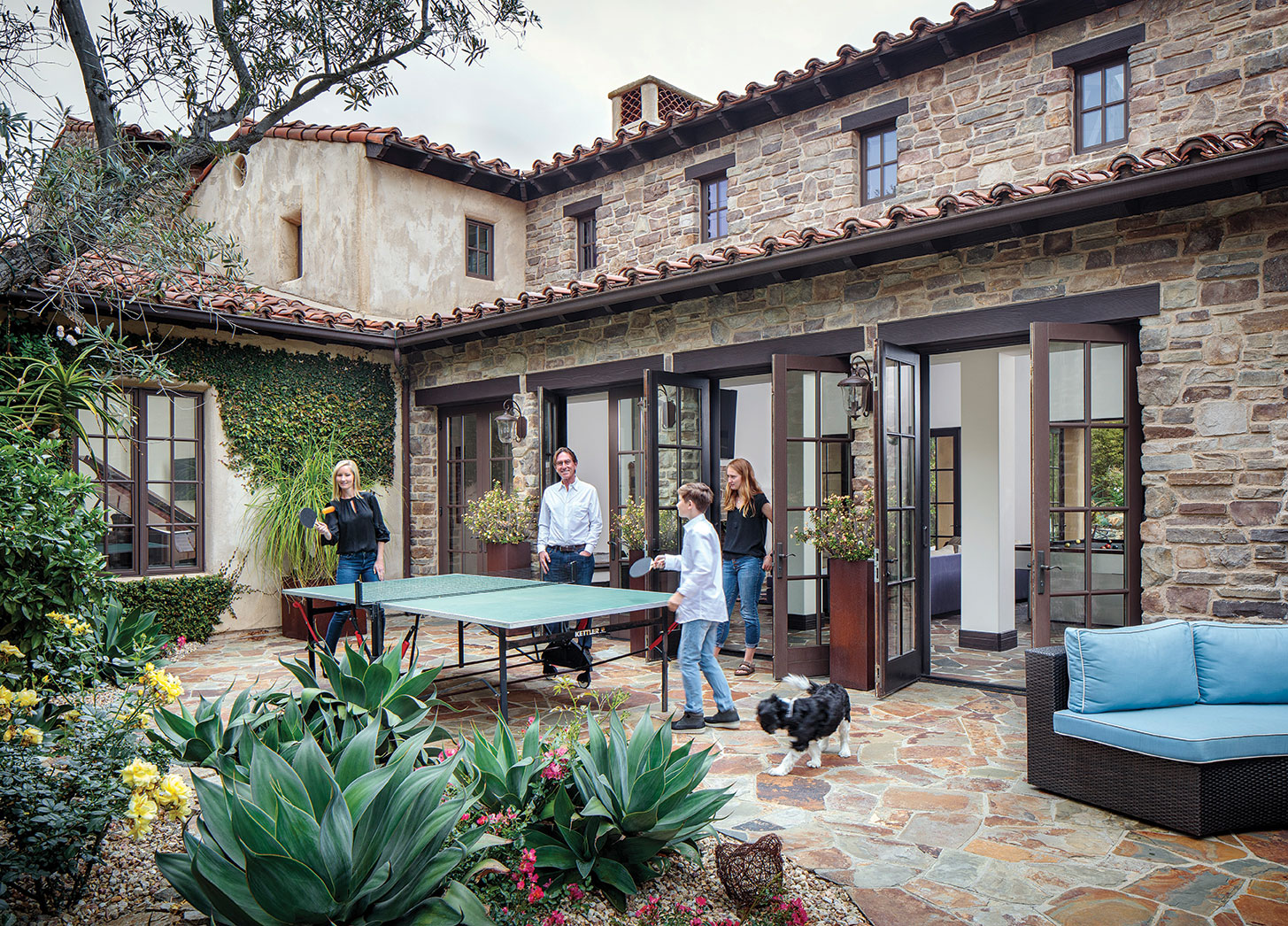 Whether playing with the pups of enjoying a family game of Ping-Pong, San Diego’s temperate climate becomes part of the family fun, indoors or out, through a series of doors brought in during a remodel by Randy Spiegel of Doranco Corp. Photo by Chipper Hatter.

“At first, I thought about doing a remodel,” Guinevere says. “But it seemed like an endless project and it was overwhelming. In the end, I wanted something that would be easier to maintain.” 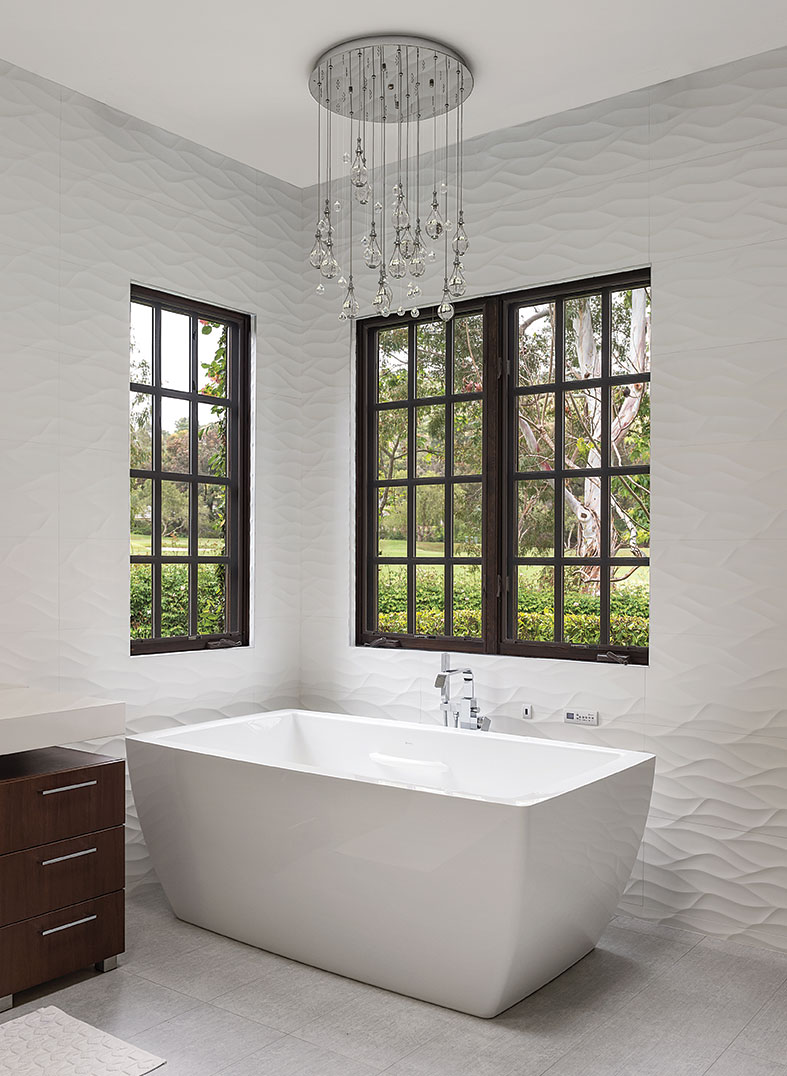 A chandelier adds elegance in the master bedroom. Photo by Samantha Goh.

Michael was fully on board to the idea of downsizing. As an on-call heart surgeon, with rewarding but demanding work that often includes long hours away from home, his top priority wasn’t residence size. What interested him most was that the household be content and that the home be one where he could relax—“I just want to drive into my driveway and head into a comfy house,” he says. 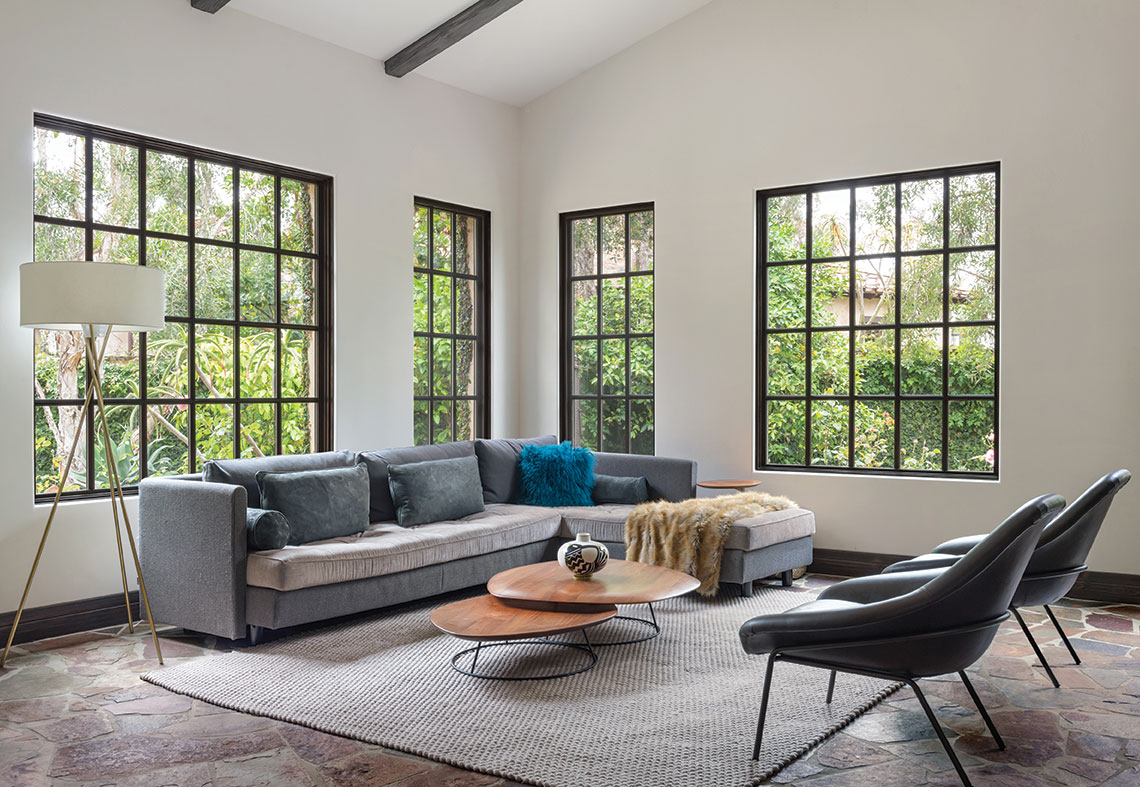 But he also fancied being able to head off to the golf course to unwind after a grueling day at the hospital—which may be partially why they didn’t stray far from their original residence. The couple traded one Rancho Santa Fe gated golf community, The Farms, for another, The Bridges, seven miles away. Besides the golf courses, Rancho Santa Fe has numerous running trails, running clubs and race events for Guinevere who is a runner and hundreds of dog-friendly hiking trails for the family’s trio of dogs (their two cats refuse to hike). 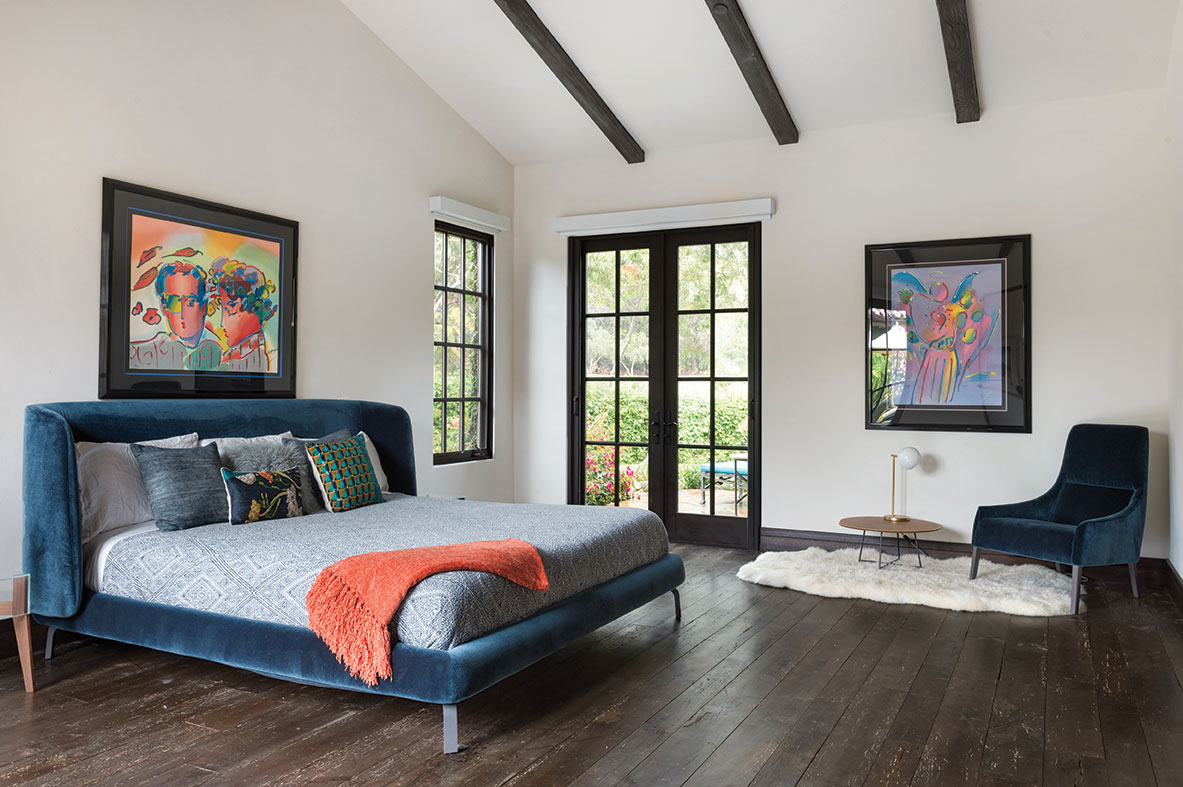 Reclaimed maple beams were cut into flooring planks for the master bedroom. Photo by Samantha Goh.

Staying in Rancho Santa Fe made moving the family less complicated. The new home may be 3,000 square feet smaller, but each child still has their own bedroom and there is a large walk-in closet attached to the master suite. 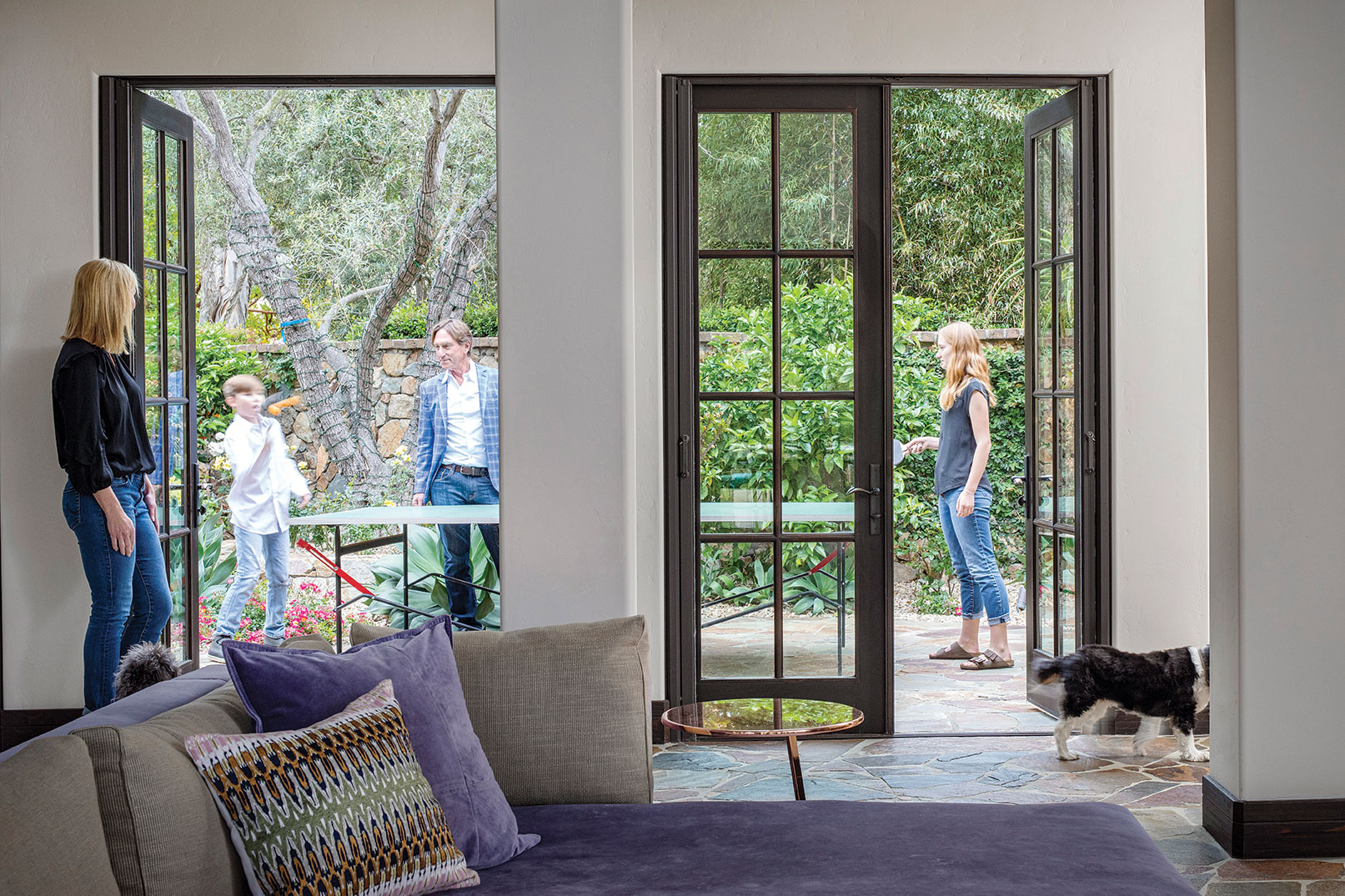 The indoor-outdoor style of the home lends itself to plenty of impromptu family fun. Photo by Chipper Hatter.

Another plus: a large loft up a spiral staircase that acts as a multimedia room and a bonus space for the kids to play and have sleepovers. Guinevere is thrilled with the maintenance-free materials like Caesarstone countertops and flagstone flooring—“I had carpeting in the old house, which drove me crazy trying to keep it clean,” she says. 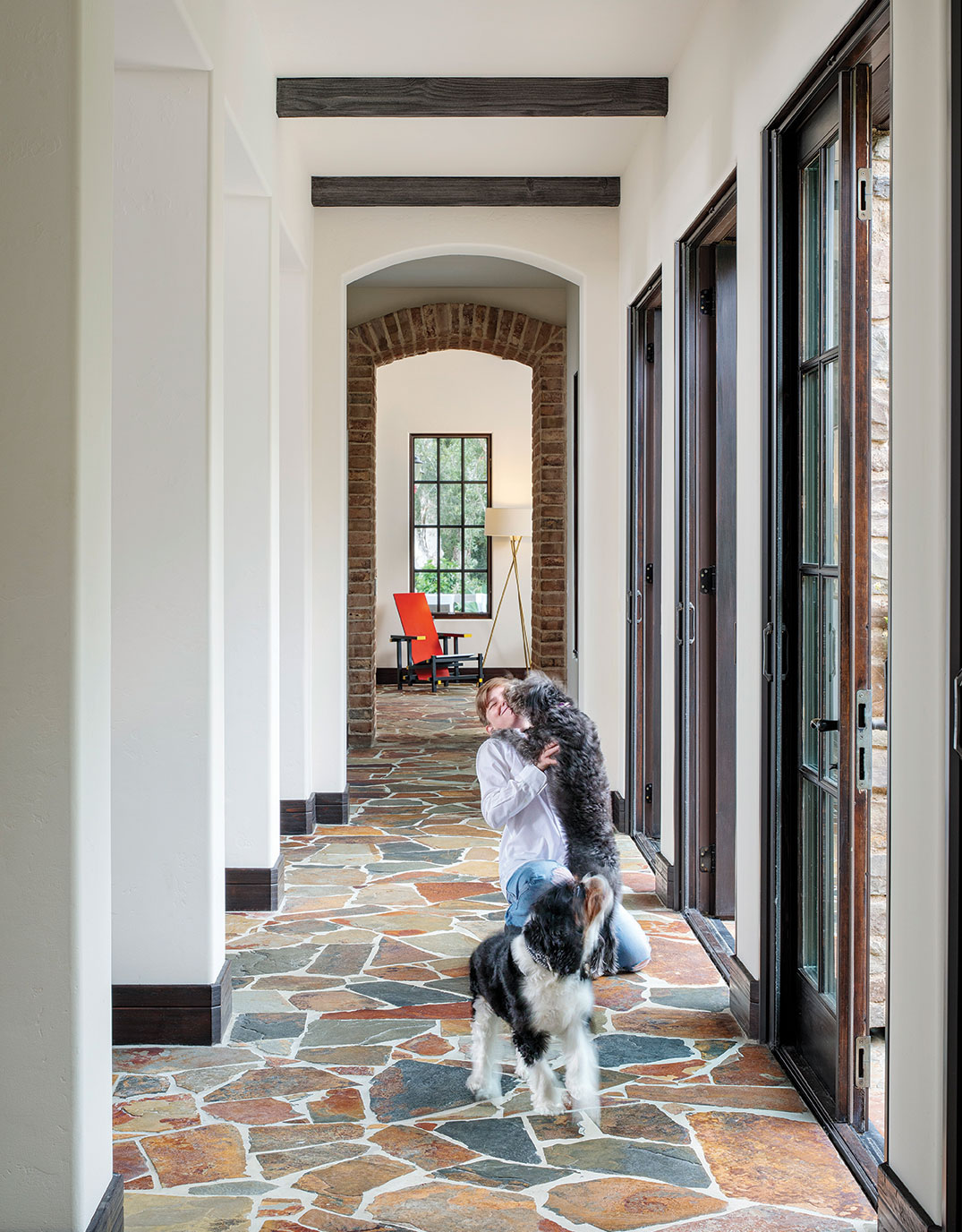 And Guinevere and Michael were both intrigued by the modernized Tuscan theme, which provided a smooth transition for their contemporary artworks and furnishings. (The couple discovered an adoration for Ligne Roset furniture when they saw the second homeowner’s collection and now have rooms filled with the contemporary pieces by well-established and up-and-coming designers.) 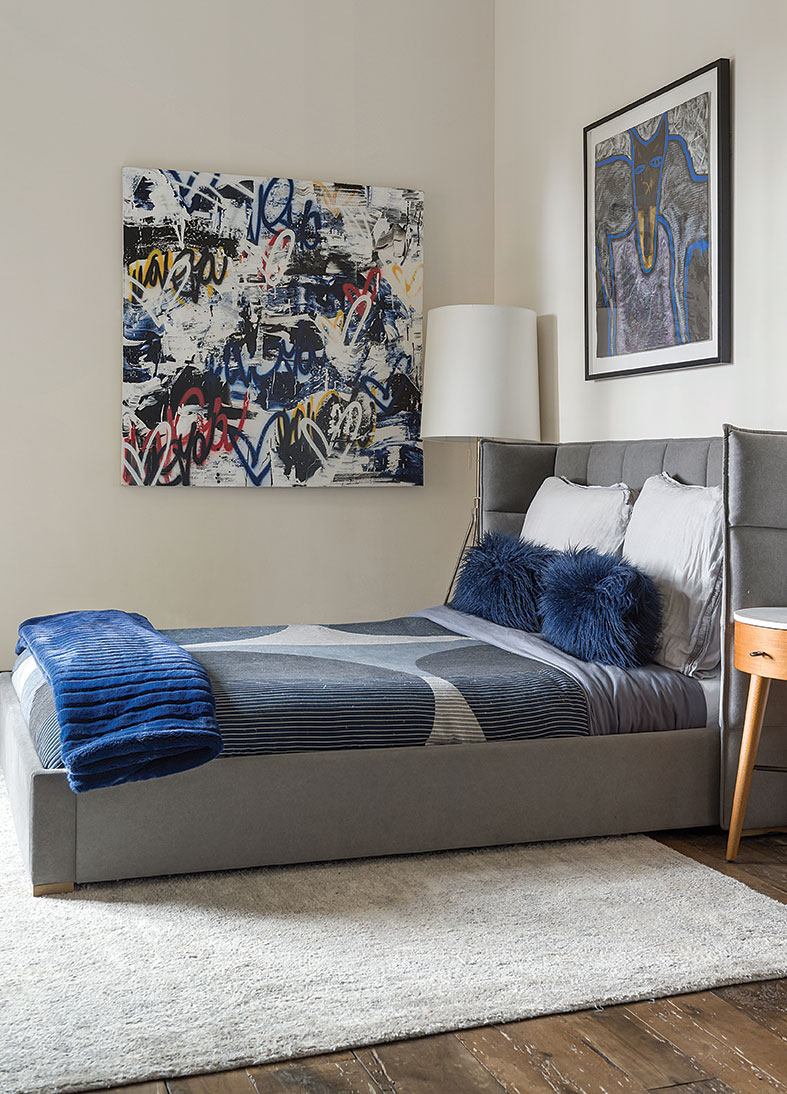 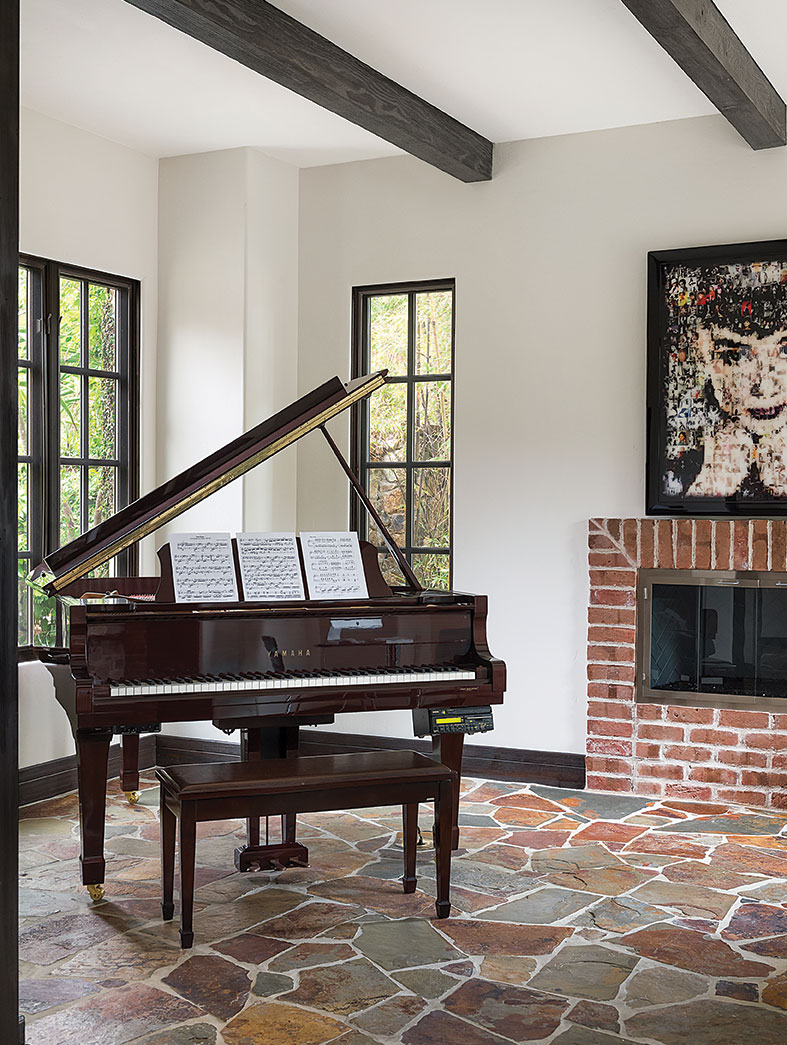 From the get-go in the foyer, a whimsical wire chair, shaped like a well-dressed gentleman offering a seat, informs guests that although the house may have its serious side, a lightheartedness belongs here too. Framed photo mosaics of Marilyn Monroe and Bridget Bardot, hanging on the entrance wall, concur. Guinevere fell in love with photo mosaics when she spotted an Audrey Hepburn photo, the first such art piece she bought for the house in that style.

Audrey now smiles down from the piano room where the Yamaha Disklavier baby grand piano plays itself since none of the kids took to it after lessons (although Hailey, who opted for cello instead, now is trying to teach herself how to play)—pictured at right.

A fourth photo, done by the same artist, of John F. Kennedy—“Michael is fascinated by him,” Guinevere says—hangs in the living room, a large space with an enormous TV above a fireplace on one end, and a billiards table behind a sumptuous purple Nomade lounging sofa on the other. 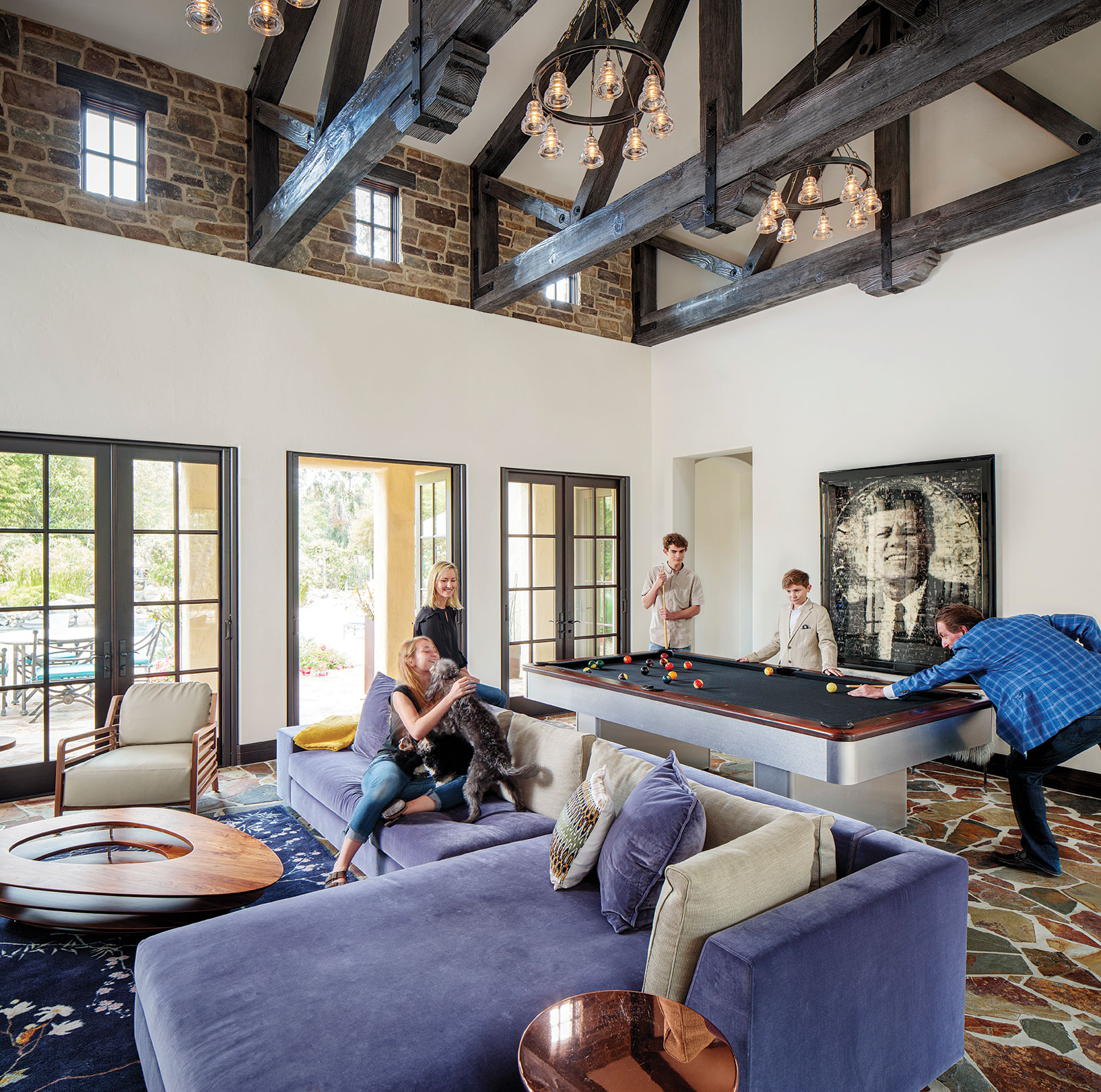 Dad’s got his jacket on for some serious pool with the boys, Kevin and Kyle. Bear the pup smothers Hailey with kisses while mom stands by. Photo by Chipper Hatter.

“I thought we’d be spending all our time in the living room,” Guinevere says, “but we’re mostly in the kitchen.” Besides the master bathroom with its white wave walls and bubble chandeliers, the kitchen is the home’s most-modern space. 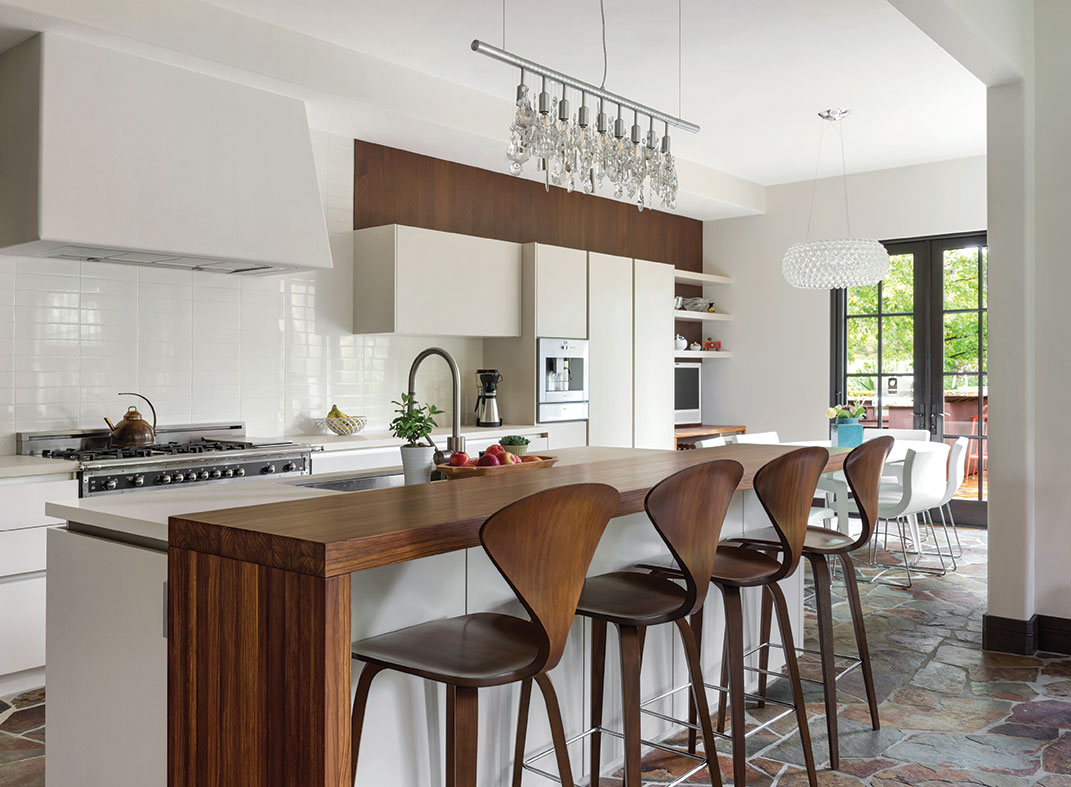 Ample space for kids to do homework and hang out in the kitchen, dining and living room open floor plan. Photo by Samantha Goh.

Filled with the sun’s warmth streaming through the dining area’s two sets of French doors and the family room’s many windows, the airy space is more akin to a great room. This is where the kids can be found doing their homework either at the wood countertop that separates the family room from the kitchen or in the dining alcove at the slim Mauro Lipparini Odessa table, a minimalist piece that matches the kitchen’s sleekness. If it’s night, the crystal beads of an elegant chandelier—Guinevere’s hands-down favorite—will sparkle with light; if it’s day, the kids—and the pups—might scamper out the French doors to play in the yard. 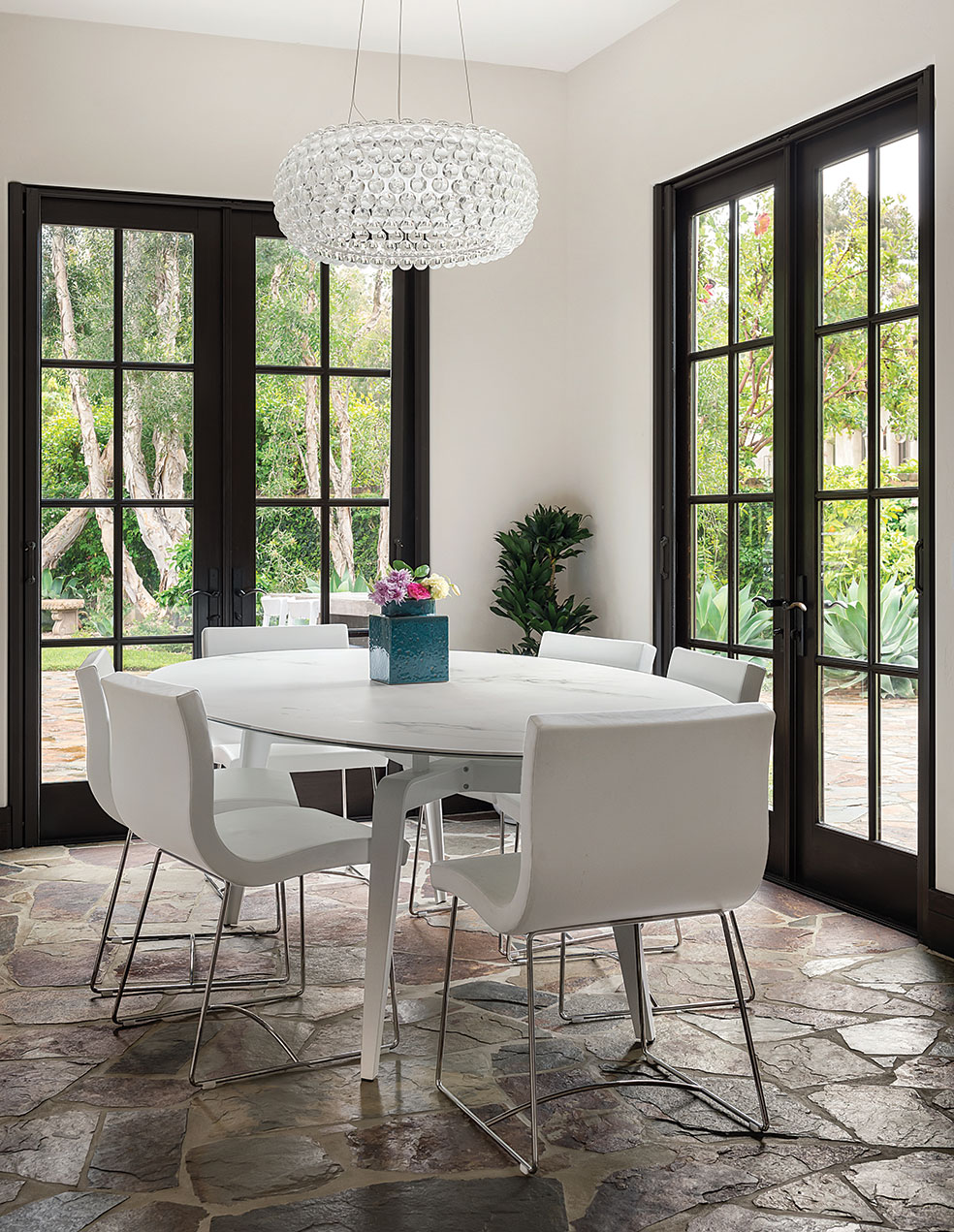 The Mario Lipparini Odessa dining table is a sleek addition to a light-filled dining area. Photo by Samantha Goh.

The landscaping features an outdoor kitchen for entertaining, an inviting pool and spa area, and nooks and crannies for lounging off bedroom areas. A great deal of the cozy backyard’s ambience comes from the charm of climbing roses and ivy clinging to the home’s exterior. They lend the house the fairy-tale appearance of a stone cottage in the countryside. 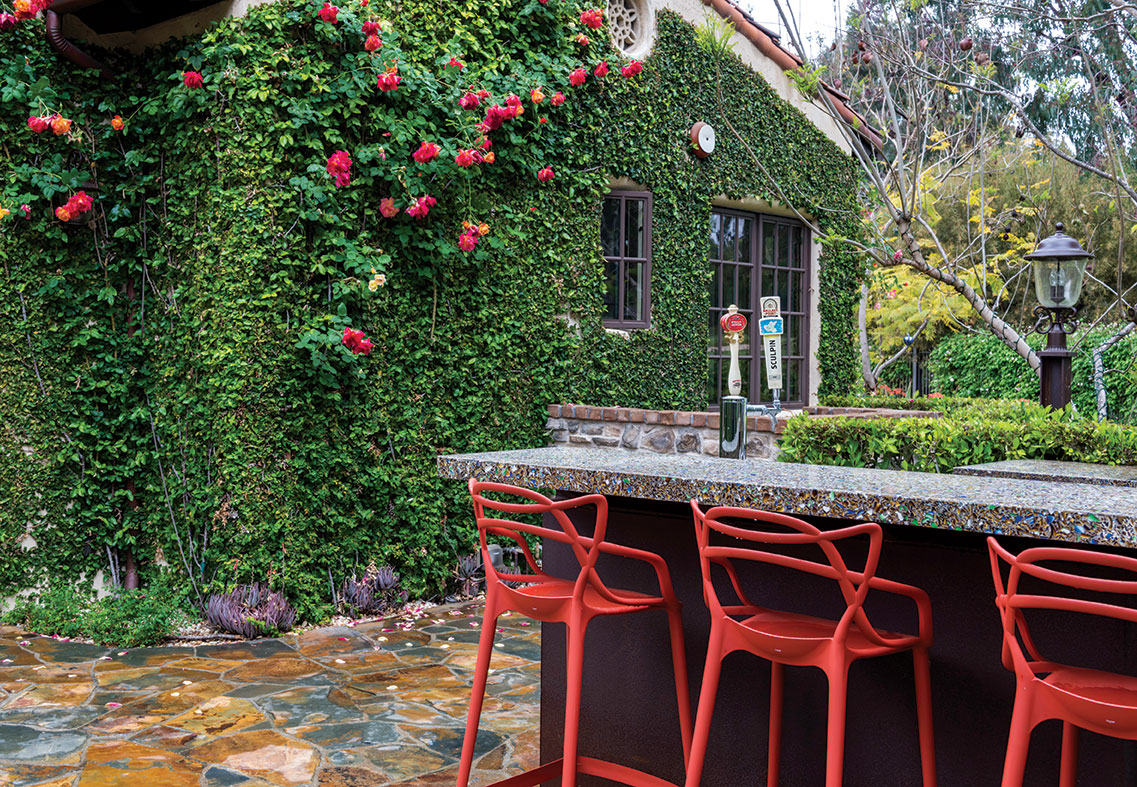 Beers are on tap in the outdoor kitchen. Photo by Samantha Goh.

“Every time I come home, it doesn’t feel like real life,” Guinevere says. “Being here is like being on vacation.” 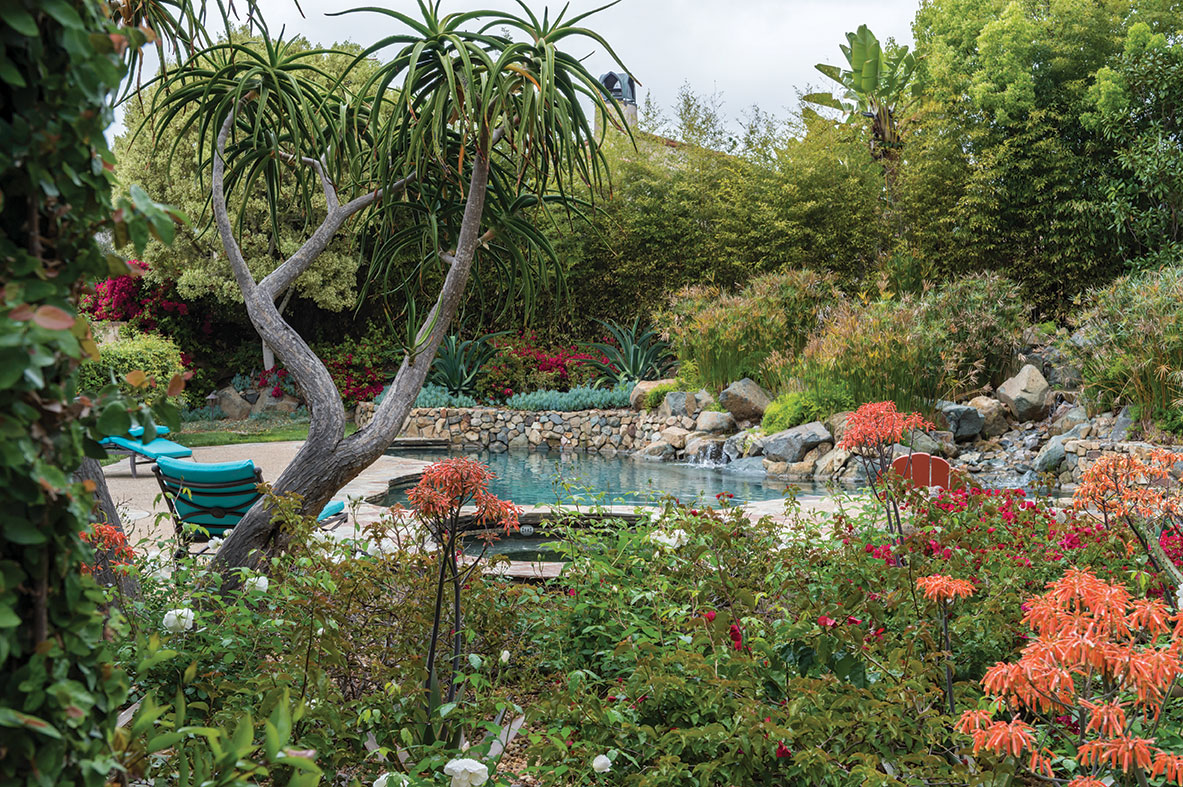 The pool’s stone and rock features echo the exteriors and flooring. Photo by Samantha Goh.