Flashback to a 1982 Rob Quigley Cover 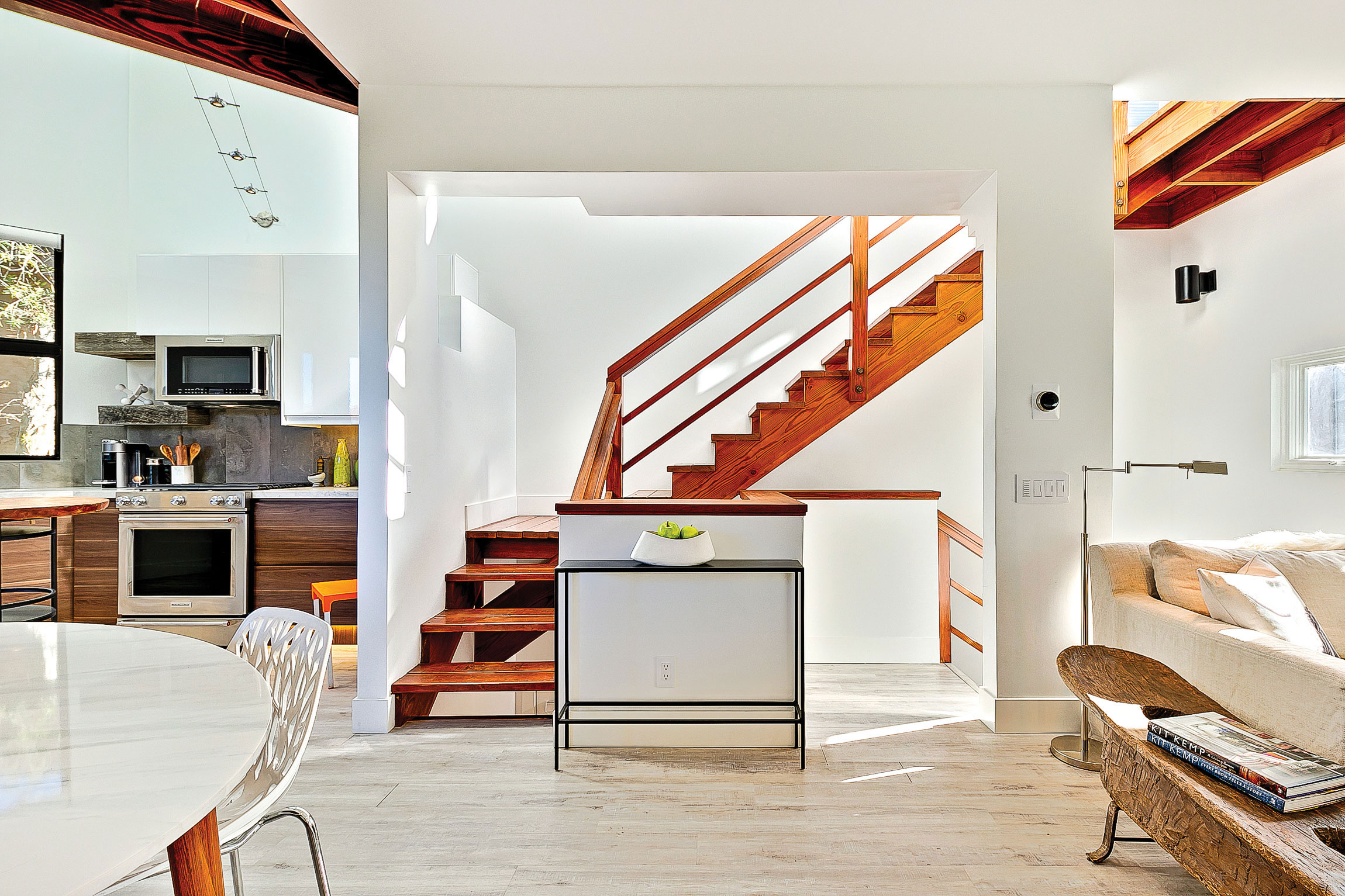 High heels tapping a staccato beat, owner Jule Eberlin closed a front door and led her visitor upstairs in her recently remodeled three-story Pacific Beach townhouse. Addie and Ozzie, two tiny brown dachshunds from the same litter, both wiggling with energy, looked up quizzically in perfect tandem as if to say, “How are we ever going to follow you up there?”

The home on our 1982 cover. Cover photography by Will Gullette.

“These long stairways are like an M.C. Escher print,” she says, citing the Dutch artist’s famed drawings of never-ending steps. The stairs provide an aerie-like view into ceiling-less spaces and help the 1,400-square-foot house feel huge.

Jule, a La Jolla architectural designer whose name is pronounced “Julie,” had been in business for 30 years when her husband Harry passed away. “I thought I’d lost the bug for design,” she recalls. But one day a friend called to say that a “really unique” condominium was on the market, and Rob Quigley, FAIA, had been the architect. “Everything he does keeps its value,” the friend added. “It’s a very special place.” 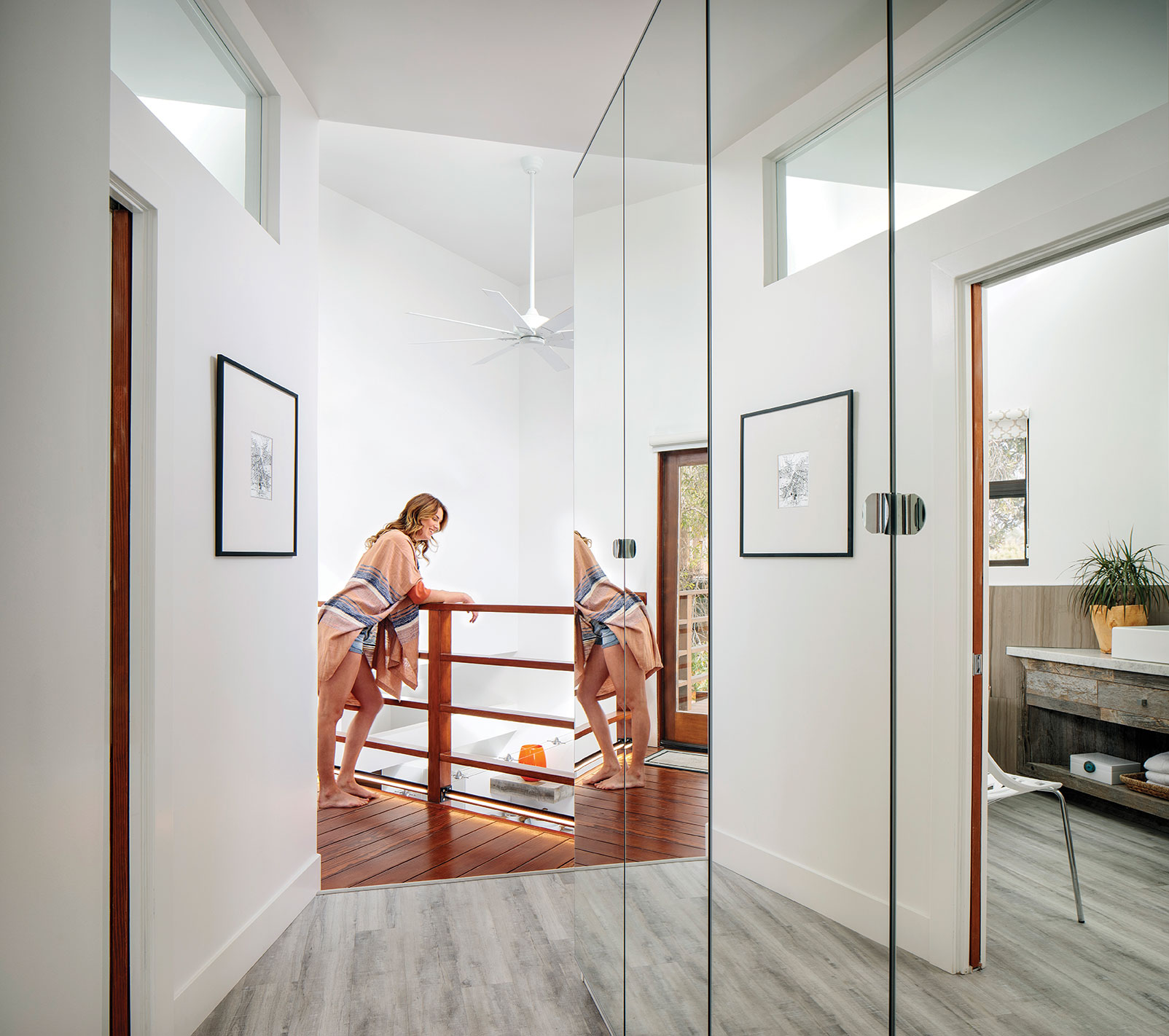 Today: Homeowner and designer Jule Eberlin’s knack for carefully placed mirrors (here on closet doors) and a clever interior clerestory window open up a narrow hallway and landing—the perfect perch for her daughter Mallory to check on what’s happening downstairs. 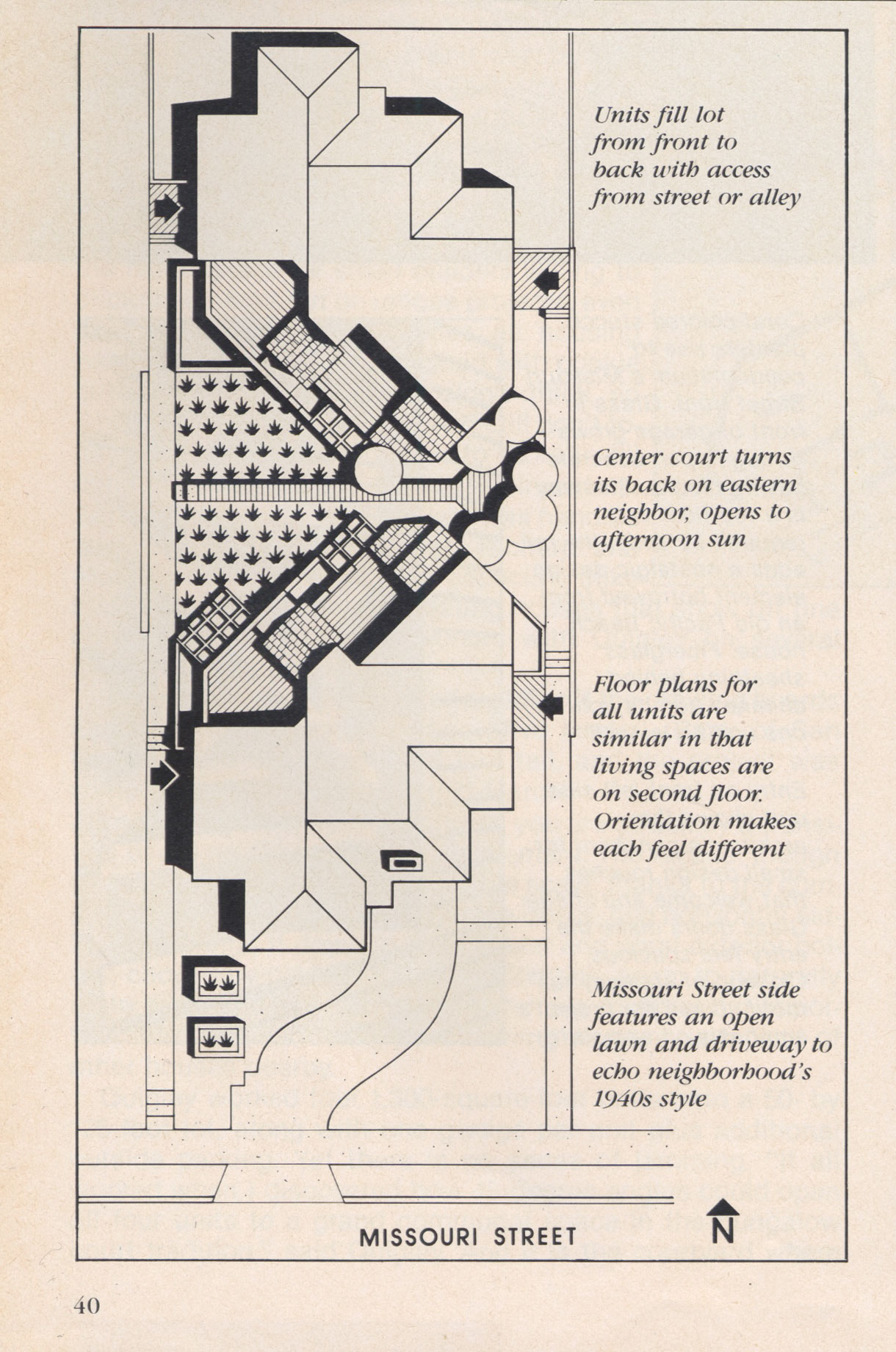 Intrigued by the possibility of being her own client on a very personal project, Jule hustled over and put in an offer. She soon discovered that the unit was part of a fourplex of condominiums that had been featured on the cover of San Diego Home/Garden Lifestyles magazine in 1982.

Dubbed “Forecast ’80s,” the project was built as an idea house—in collaboration with this magazine—by the American Wood Council, several local design teams and the Holm-Wodehouse Company, a progressive developer headed by partners in their early 30s looking to “explore new ways to use wood, maximize the lot and living space, be sensitive to the neighborhood, play with light and volume, keep housing costs reasonable, and never, never bore their owners.”

(The reporter on that project long ago is the author of this story today, and I find it fascinating that new generations are rediscovering the work of 1980s design and building-industry idealists.)

The Forecast ’80s team also hoped the project would inspire other similar “in-fill” development at a time when San Diego was sprawling rapidly north and south of its urban center. The trend is finally being realized today, 37 years later, in older neighborhoods such as North Park and South Park, Normal Heights, City Heights and elsewhere. 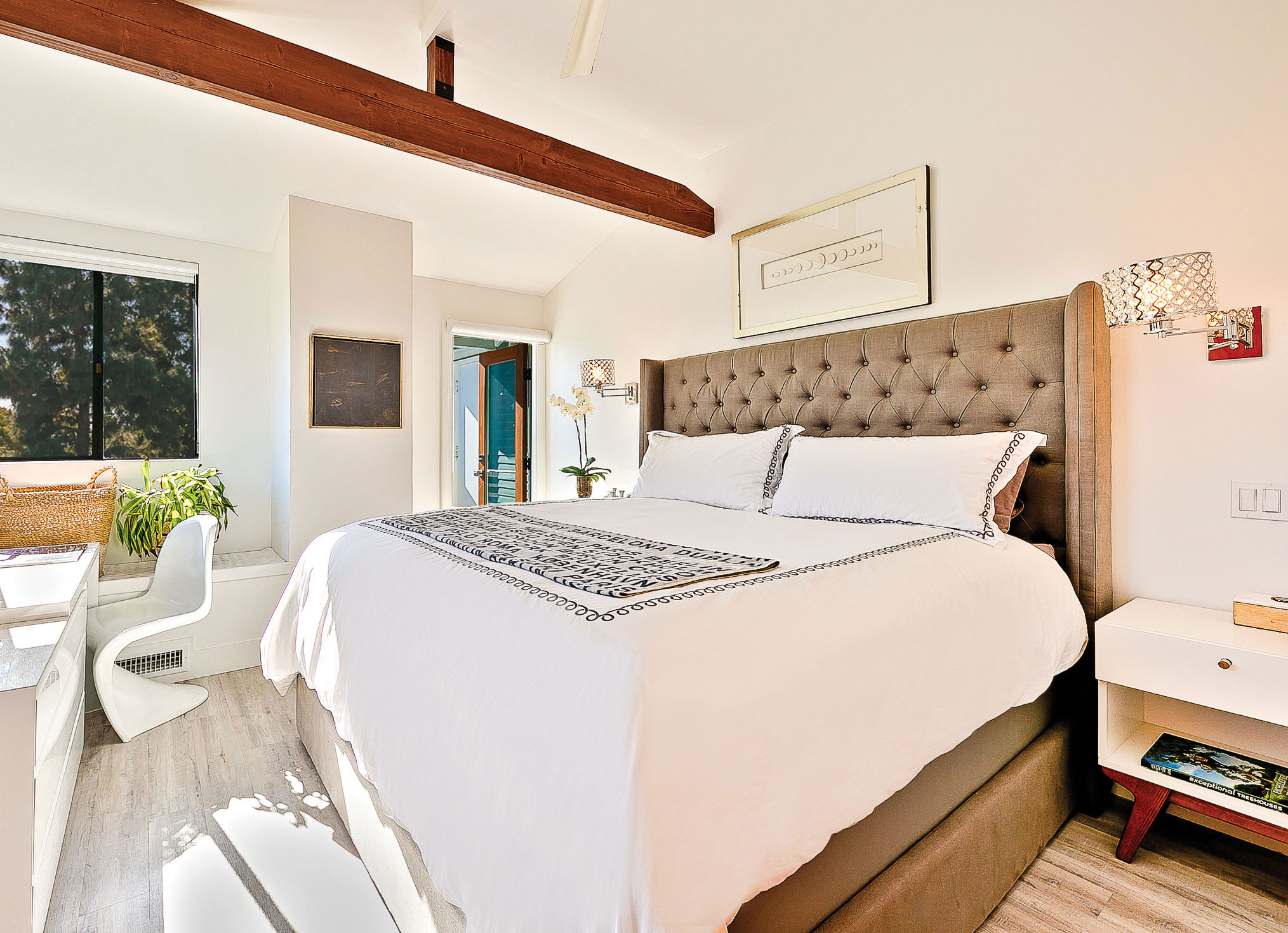 Today: The master bedroom’s huge bed couldn’t be carried up the stairs, so it was joisted over a balcony from the kitchen.

Thirty-seven years can take its toll on a house and it needed significant modernization. Still, Jule felt the design was as fresh as ever: “I’ve loved Rob Quigley’s work for years,” she explains. “I like classic looks turned quirky, and some of my other favorite architects include Robert Venturi and Michael Graves.”

Jule didn’t rush. It took two years. She never lived there, but her daughter Mallory moved in for a short while and some of the house’s mysteries began to unfold; good mysteries, even though a few proved amusing and challenging.

“Mallory slept in the living room because we couldn’t get a king bed up the stairs,” Jule remembers with a smile. “Architects don’t always think about getting furniture in. We’re all tall in this family, and a big bed is a necessity. She also had trouble taking a shower in the master bathroom. It was so narrow she had to leave the door partly open.”

The original kitchen layout posed another hurdle. The 1982 article rhapsodized about the nook being a “friendly invitation to slide in and sit,” but soon Jule and friends were calling it the “RV kitchen” because—well—it reminded them of being jammed together in a Winnebago on a road trip. 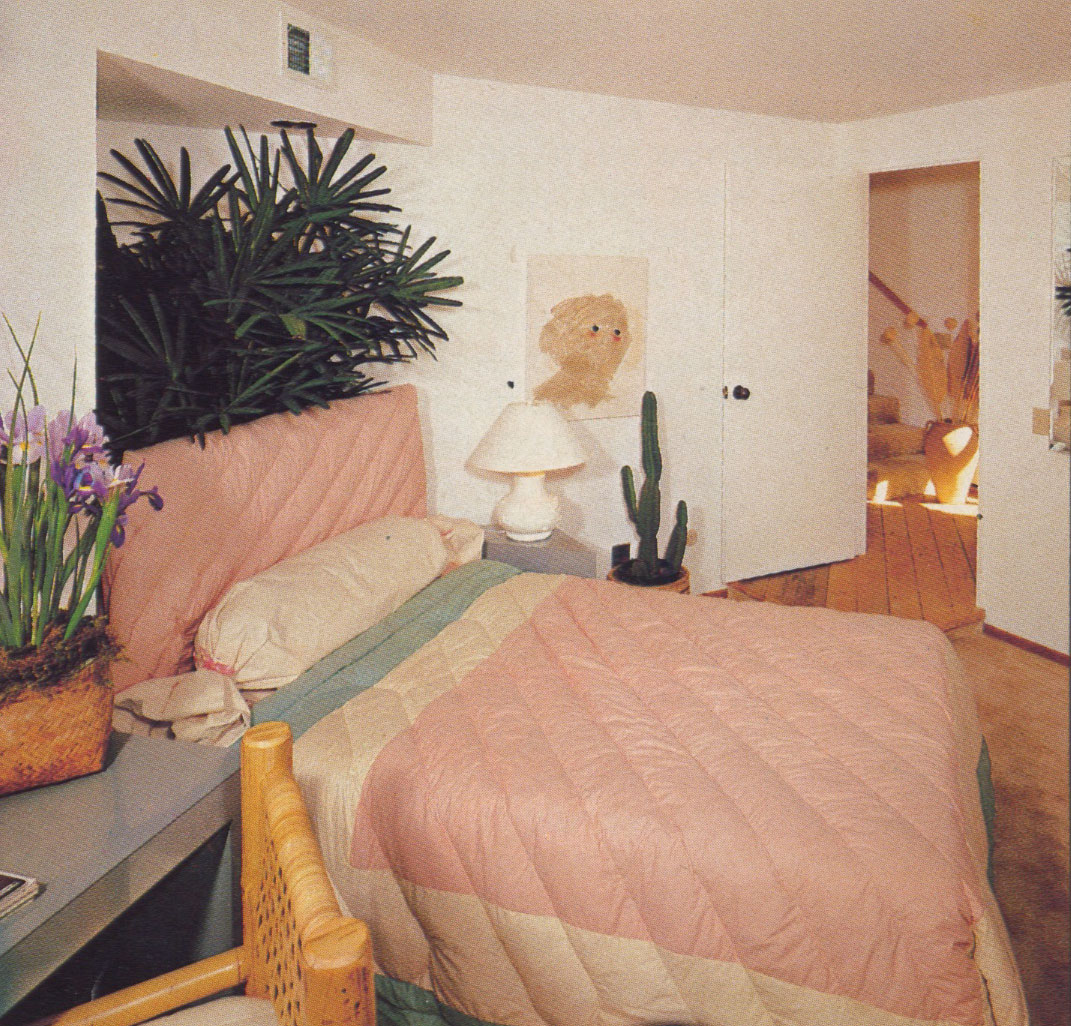 1982: The downstairs bedroom is all angles, reflecting architect Rob Quigley’s penchant for using unusual geometry to make a bedroom feel more like a true living experience rather than a box for sleeping. Photograph by Will Gullette

Despite all its quirks, Jule loved the original layout and “was surprised how little work was needed.” 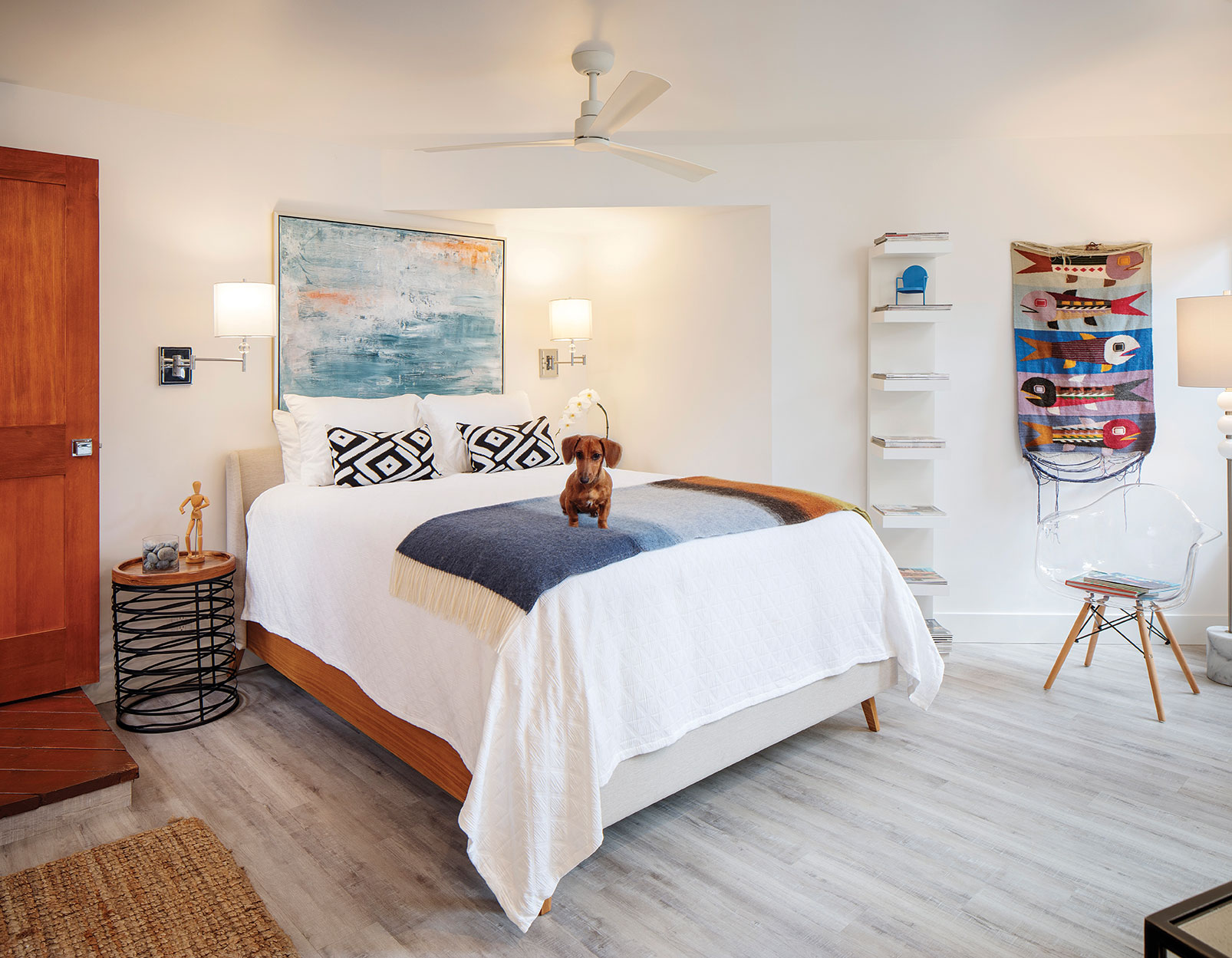 Jule grew up in Denver. “When I came to California, I thought I was supposed to be born here. Hollywood, the palm trees—it was the bomb,” she says. Her parents are artists and designers, so “design is in my blood.” She took immediately to the Southern California lifestyle and it’s  reflected in her design ethic: “I’m not a big go-out person. I like comfort and being surrounded by interesting things everywhere I look. You can have clean, modern furniture but it has to be comfortable.” 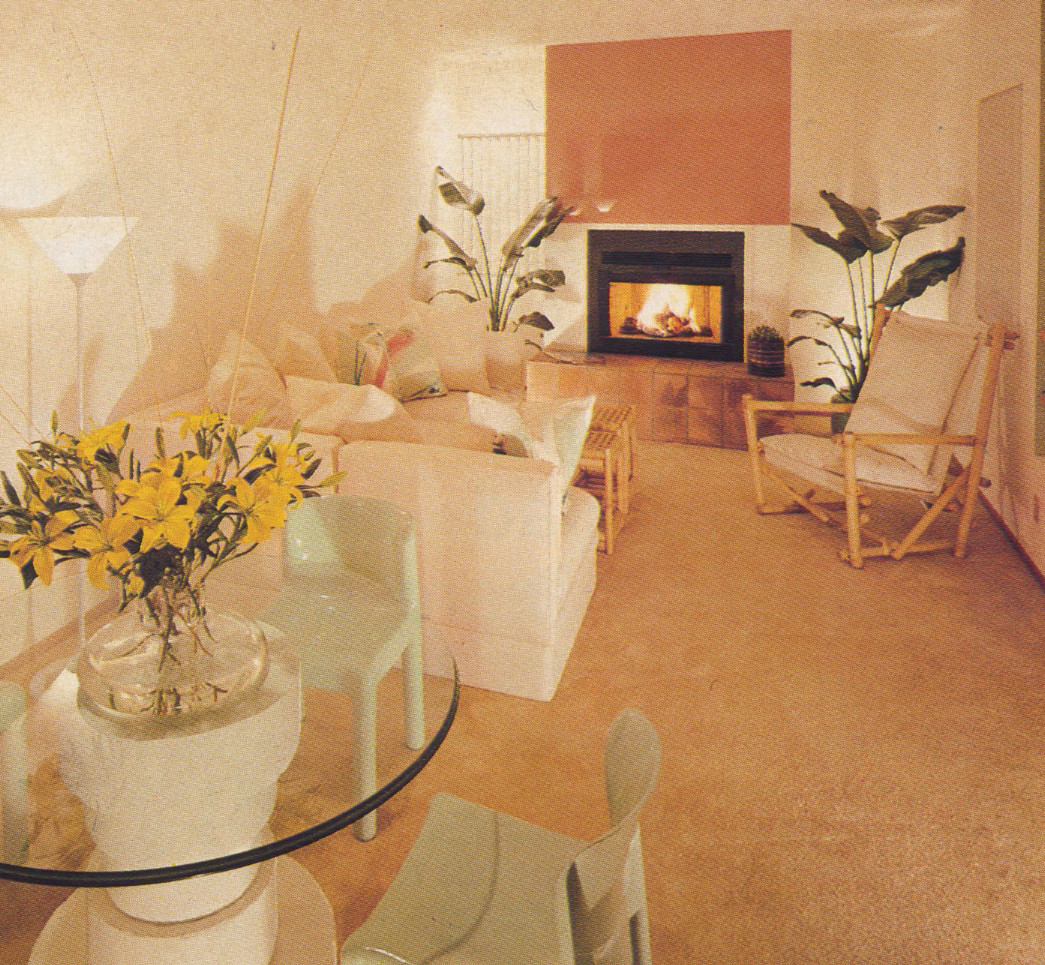 1982: The original living room provides a peek into design trends of the past, when warm tones took over San Diego interior designers palettes like sunshine melting a snowbank, and torchier lamps bathed nubby paster ceilings. Indoor plants were also popular: the more “architectural” the better. Photograph by Will Gullette.

Jule says that when you walk into your home, you should feel like you’re on vacation. 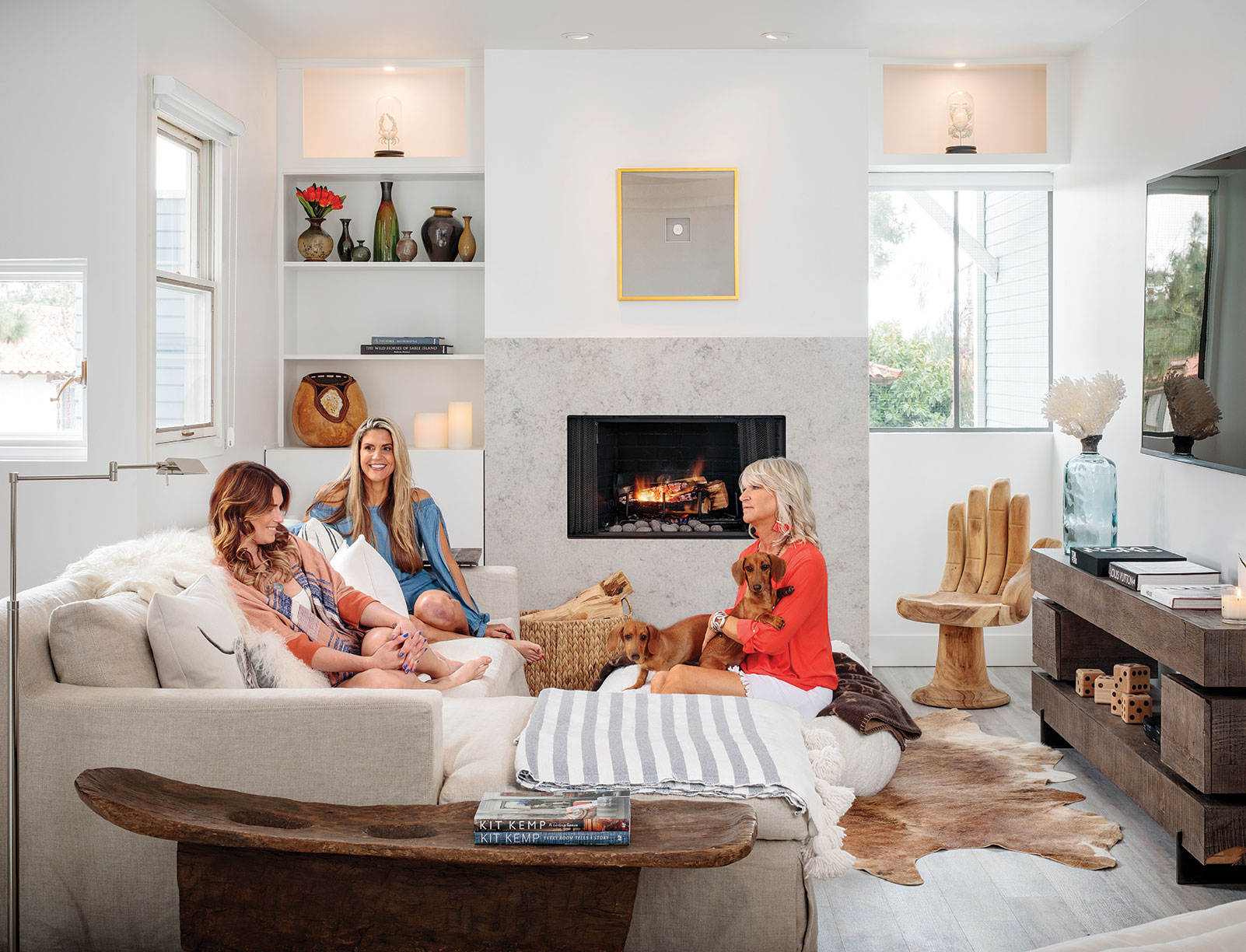 Today: New windows open the room and provide a pleasing interplay of natural and halogen-spot lighting. Jule—seated with the pups—brightened the living room, going with while for most surfaces and adding intriguing shelves and nooks for artworks and collectibles.

Much of her work today focuses on staging homes for sale. She’s a co-founder (and now consulting designer) for Elizabeth J. Home. “When staging a place, you get to play in a house and then walk away!”

She respects the old, the existing, the original. “I’m the designer who doesn’t move many walls. And I’ll build around a tree rather than take it out.” 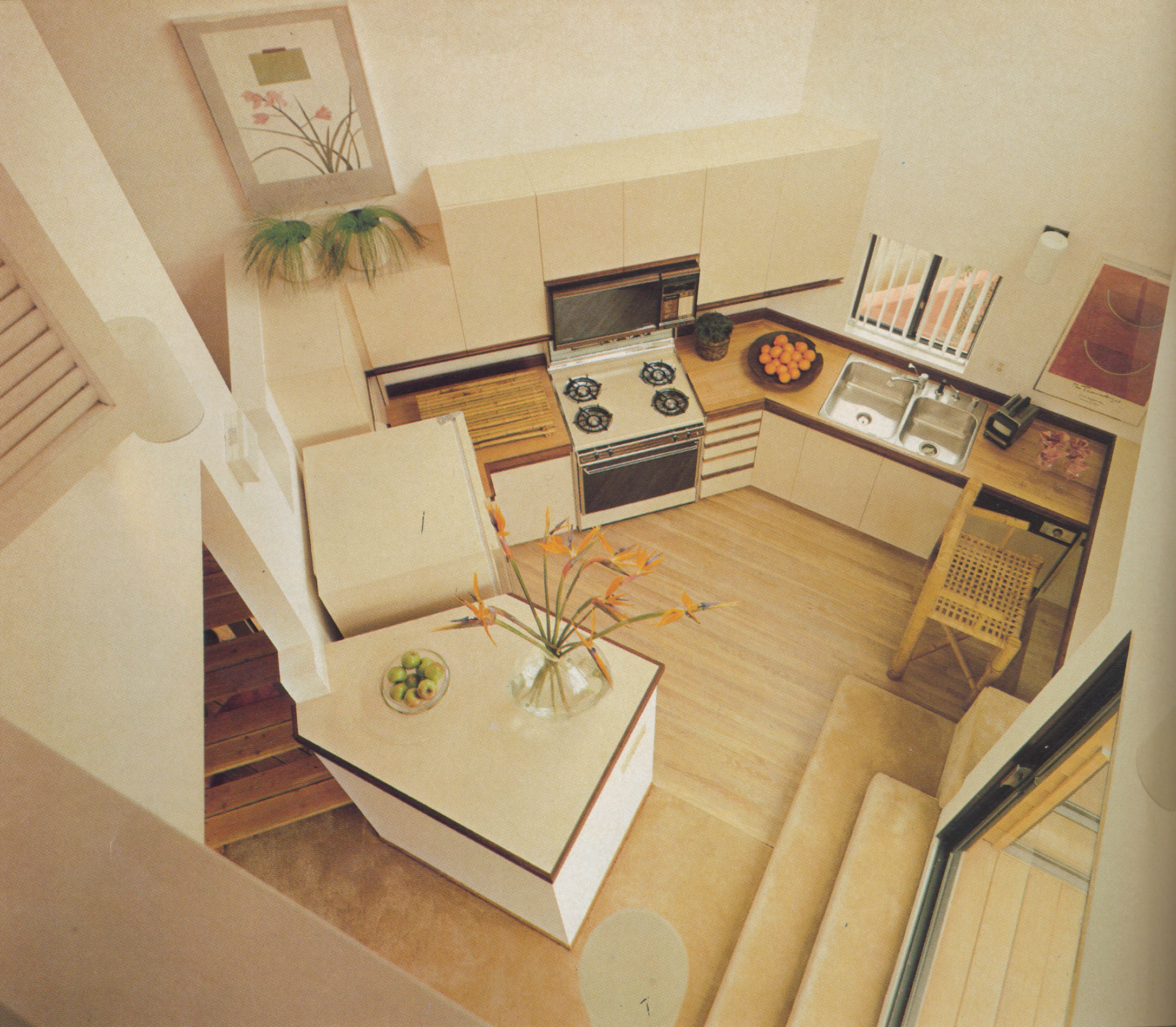 1982: The kitchen from above. The original project was designed to be affordable beach-area housing with great flair and construction innovation and lent itself well to Jule’s artful approach. Photograph by Will Gullette.

The kitchen anchors the house. Although small, it has no ceiling and opens to the very highest point in the house. 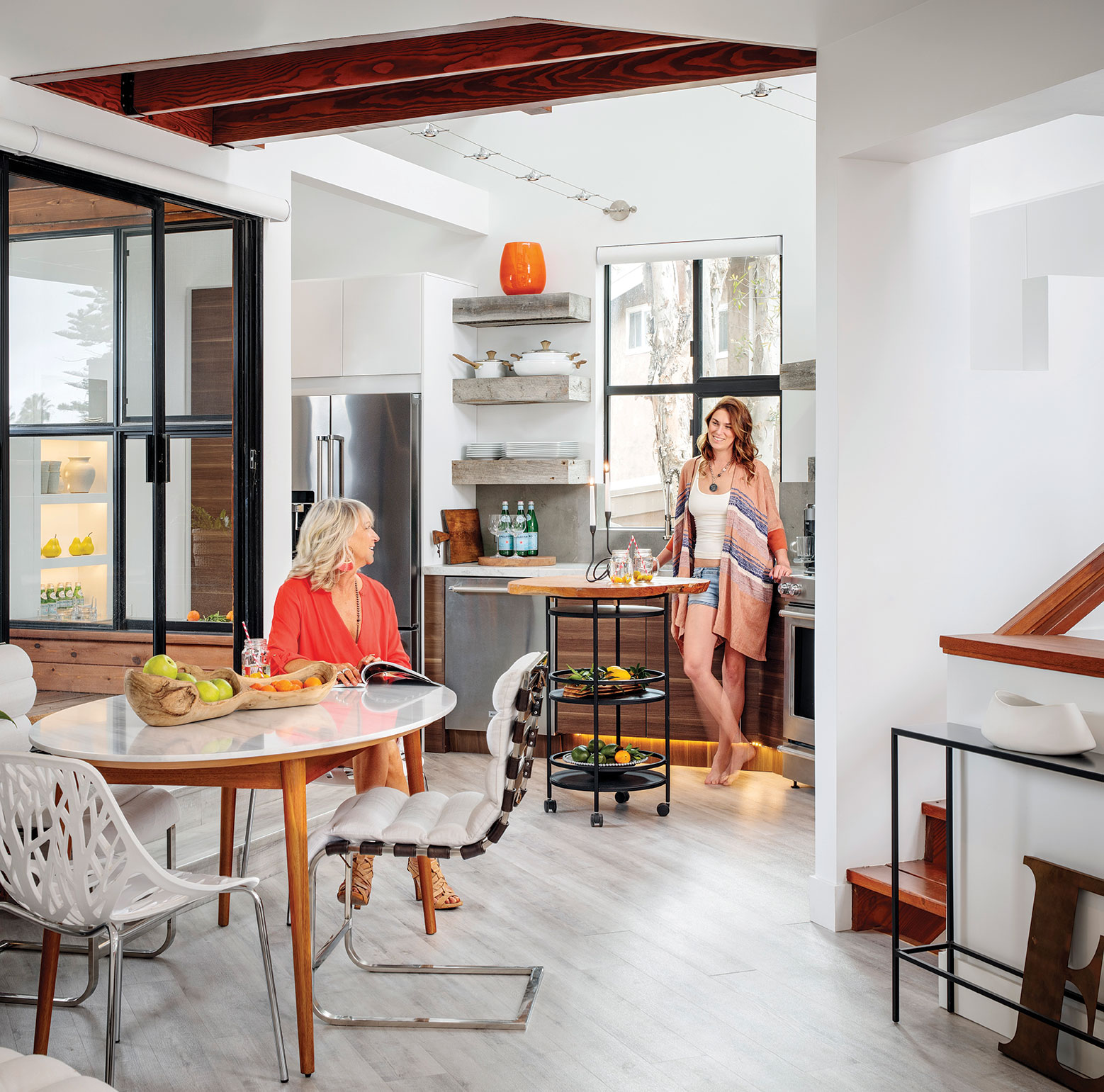 Today: Jule made some powerful changes in the kitchen and dining layout, turning what was once a little galley kitchen with basic appliances into a modern chef’s dream

Dining takes place at a small table near the living room, or outdoors on a sheltered deck, which also houses the barbecue. Jule “loves open shelves” and prefers to see cookware and dishes out in the open rather than behind closed cabinet doors. What cabinets she did need are from IKEA, but they still give the kitchen a high-end look: “They’re good quality, a great value, and very smart with their space-saving designs.”

The master bedroom and bathroom occupy the entire third floor. She solved the too-big-bed problem by hoisting it up from the kitchen much like brawny movers might lift a piano through a window into a New York City walkup apartment. 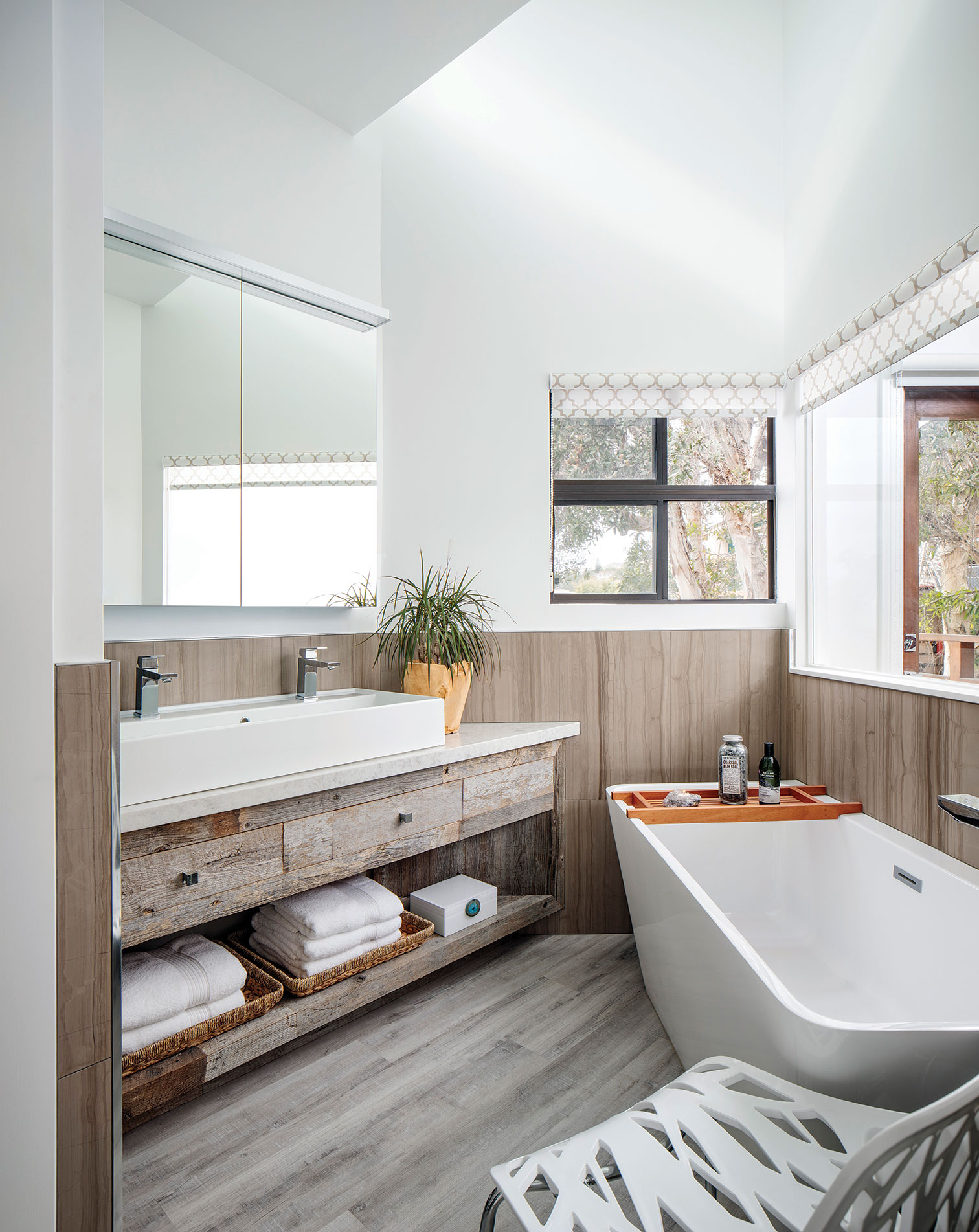 When you stand at the very top of the stairs, or on an indoor deck overlooking the kitchen, you realize that Jule turned the entire interior into an artist’s canvas: all walls are smoothed to perfection and the whitest white. Remote-controlled blinds are…white. “My ‘pop’ colors are tangerine and fuchsia,” she says. “And green. A white house interior presents a solid plain palette to start with.”

“[A friend and stylist] made me wear orange for this photo shoot!” she adds with a laugh. 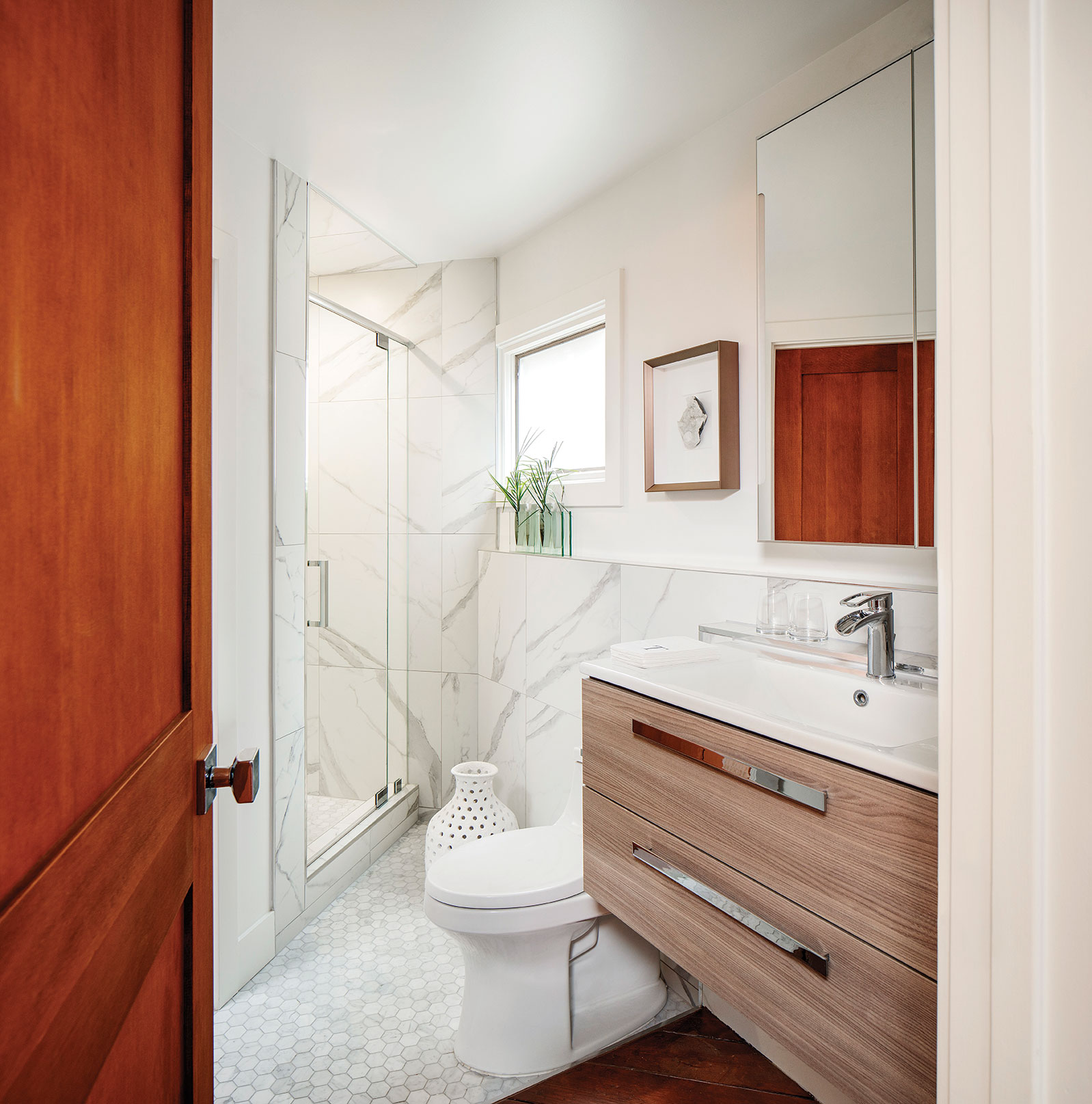 Jule added several elegant touches wherever a visitor’s hand wants to reach out and touch the warmth of wood. Some walls are capped with beautifully joined mahogany; the work of master craftsman and general contractor Brian Gort. He also sourced the weathered wood that accents several rooms.

Brian and Jule share more than just a common love for a remodeling project done very well. “He’s now my fiance,” she says with a smile.

With that, Addie and Ozzie reappear, tussling and tumbling into the room like two kinetic art objects carefully chosen by a very talented designer who found happiness in a Pacific—peaceful—Beach. 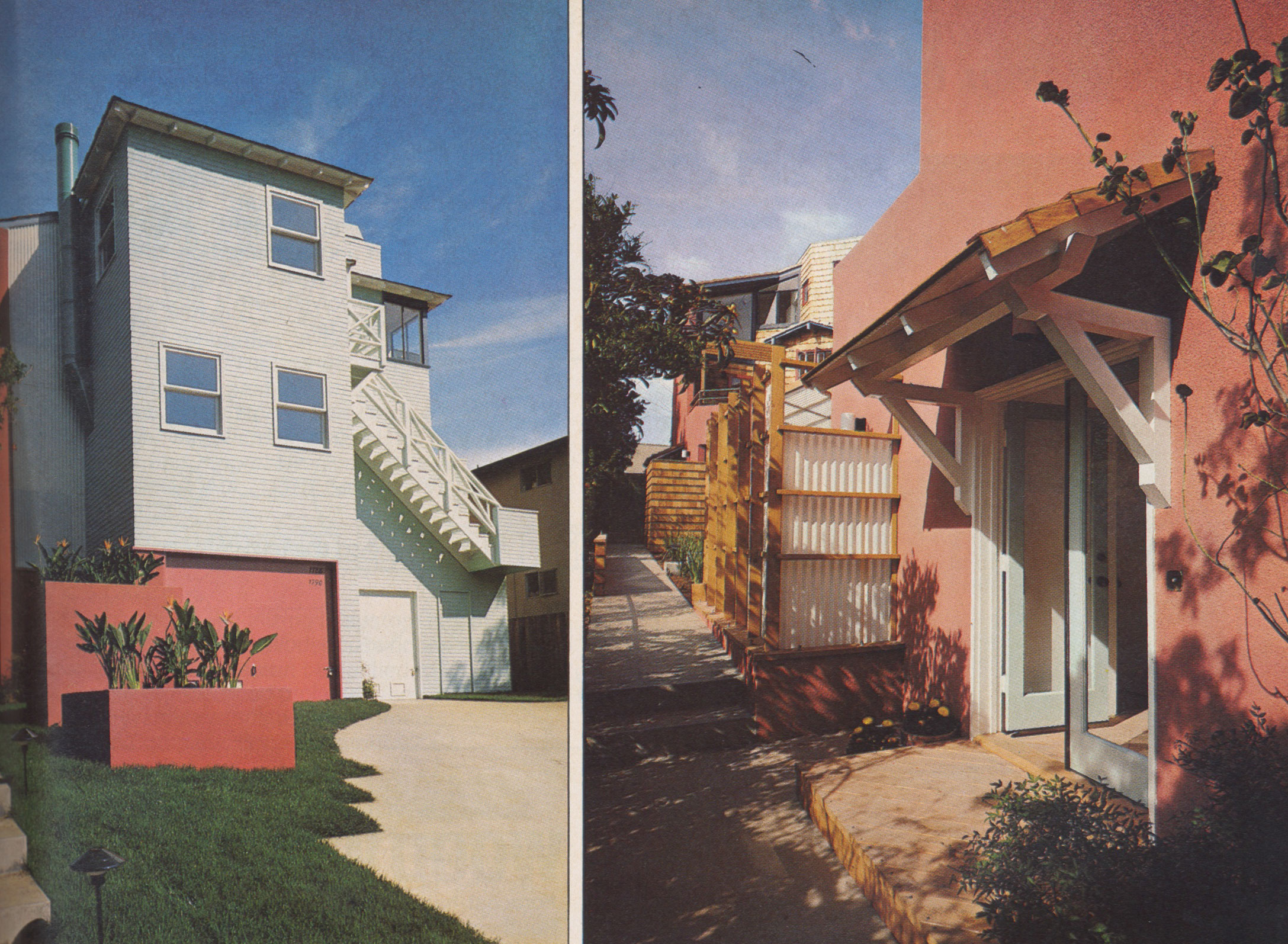 1982: The exterior is hardly changed from the original photos. Photography by Will Gullette.