Gardens of the Year 2019: An Artfully Zen Landscape 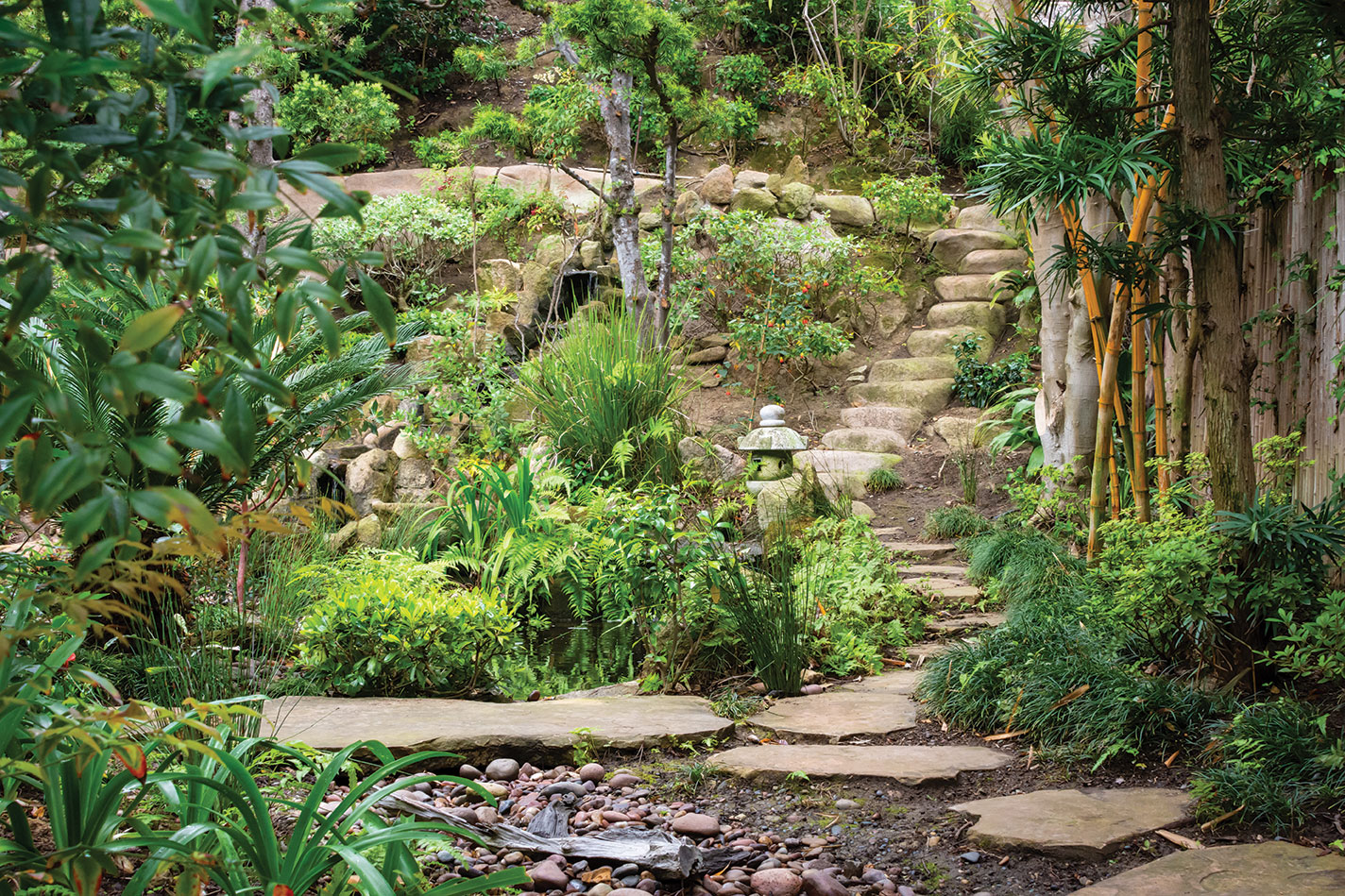 One way to provide a tranquil ambience to a property is through the asymmetrical beauty of Japanese aesthetics.

“We were told that the garden was designed by an unknown master Japanese garden architect who later returned to Japan,” Michael says. “He had created a frame for the garden and left it to others to complete the picture.” 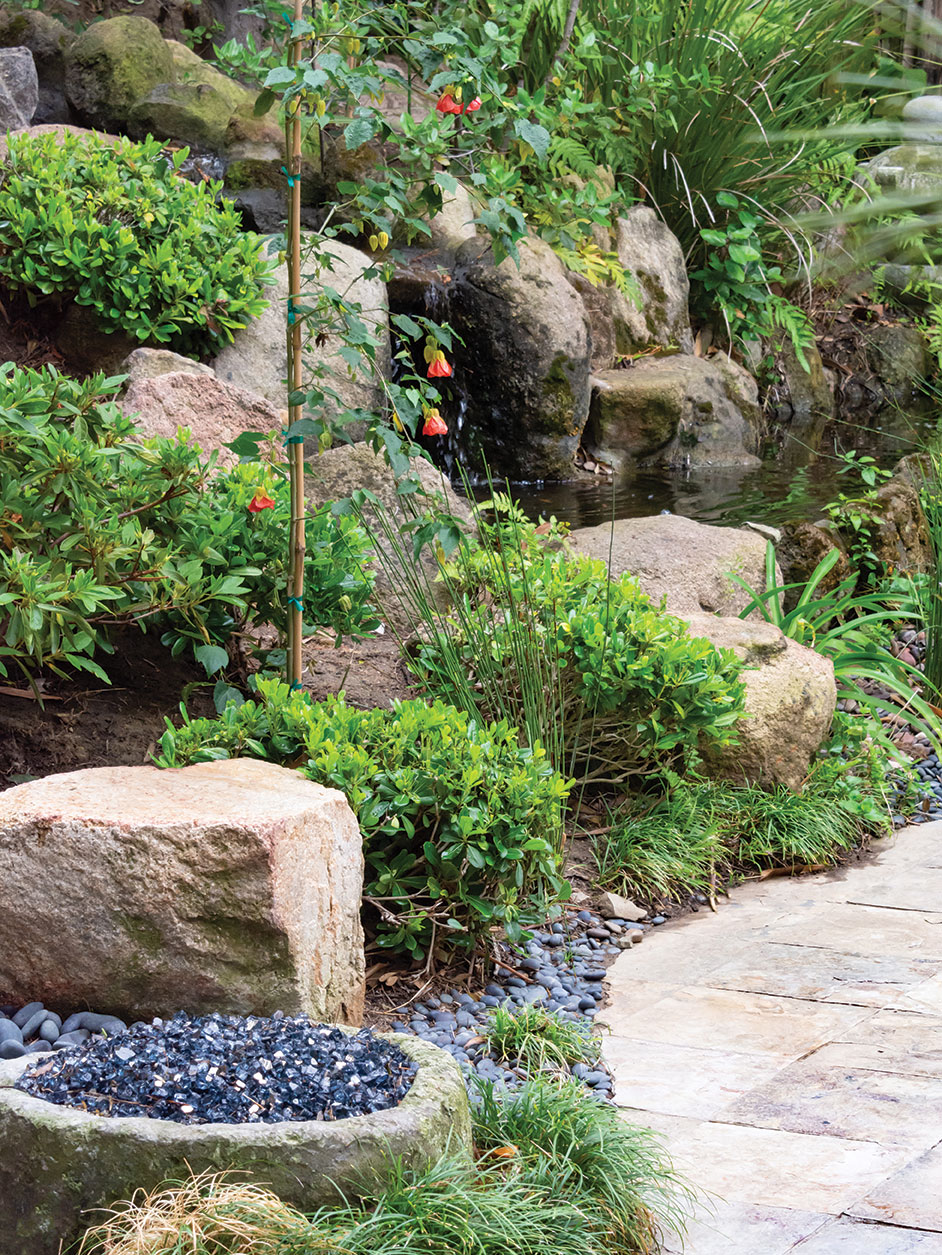 Luckily, it turned out the “others” were Michael and Hiromi. For the last 20 years, the couple have dedicated themselves to discovering the elements and ancient principles that endow Japanese gardens so that their small lot would reflect those artful aesthetics and esoteric concepts. They made many trips to Japan to visit residential gardens, small gardens at various Japanese inns and famous public gardens such as the Zen garden at Ryoan-ji Temple in Kyoto. They spent hours poring over literature on the subject. 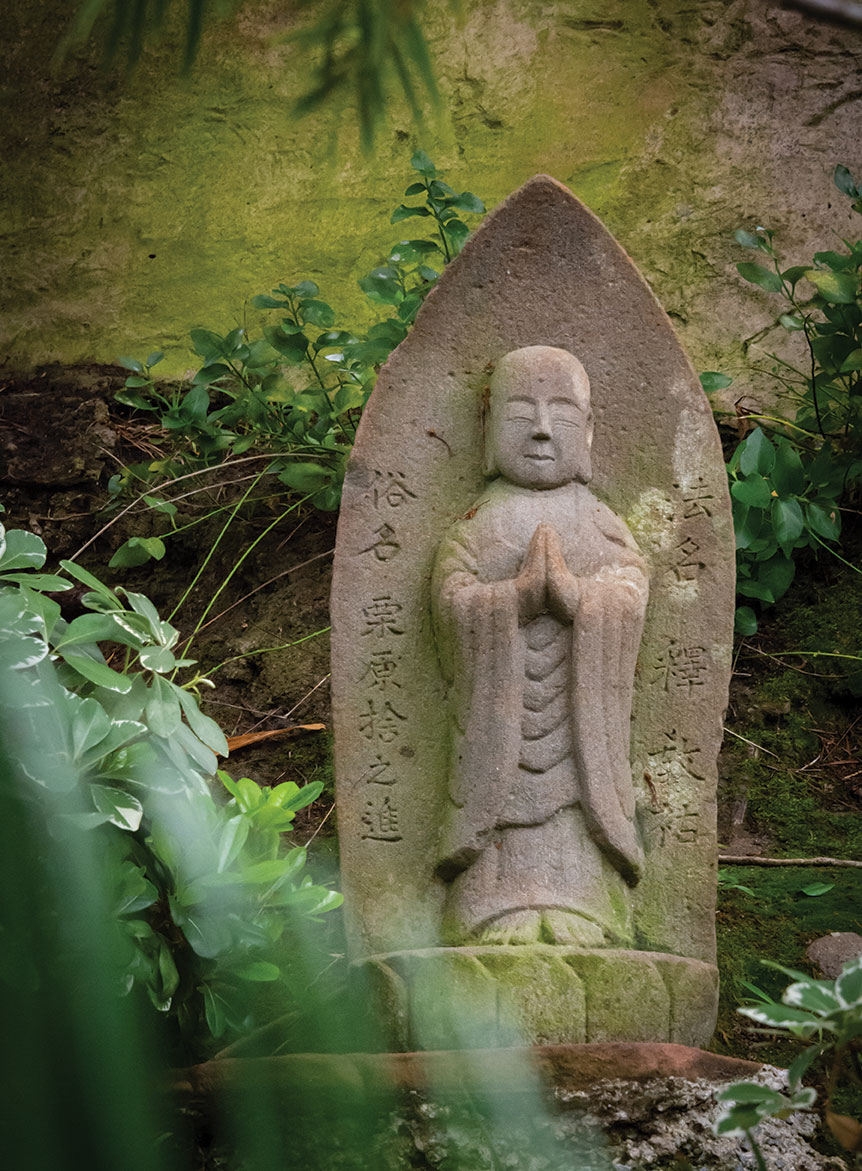 A statue of Jizo watches over the garden.

“Michael has hundreds of books about the Japanese garden and he has become a master,” Hiromi says, patting her husband’s hands lovingly as she sits next to him in their family room. The settee where they sit looks out onto the backyard’s hill and pond garden where rugged stone steps lead to a statue of Jizo, a Bodhisattva known as the protector of the vulnerable. 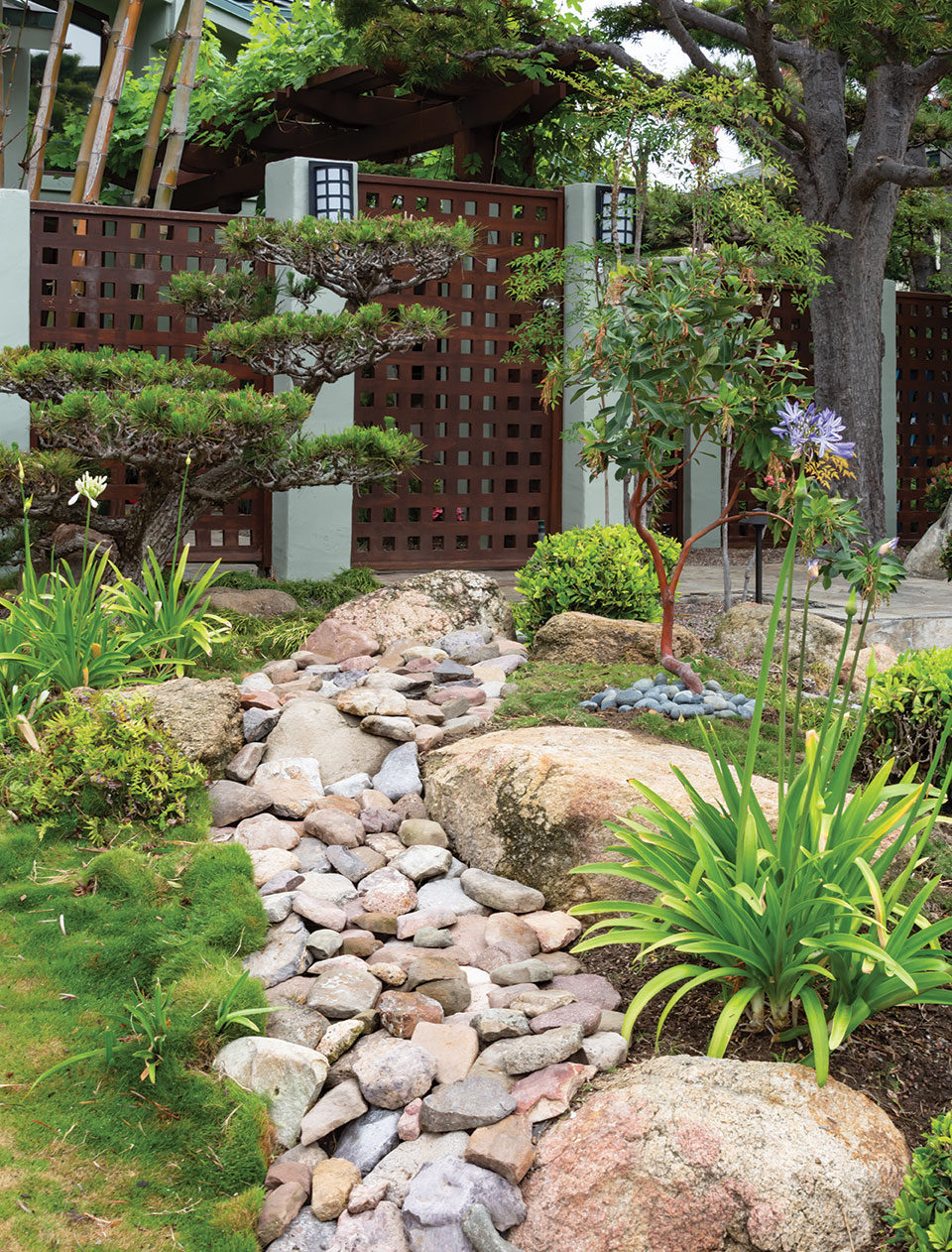 A dry riverbed leads to a gate that opens to the interior gardens.

“I started out really enjoying the intellectual nature of the Japanese garden, the simplicity of it, the wabi-sabi imperfection,” Michael says. “In American intellectual thought we like symmetry and things that are perfect. In Japan, they see the beauty of things that are imperfect and asymmetrical.” 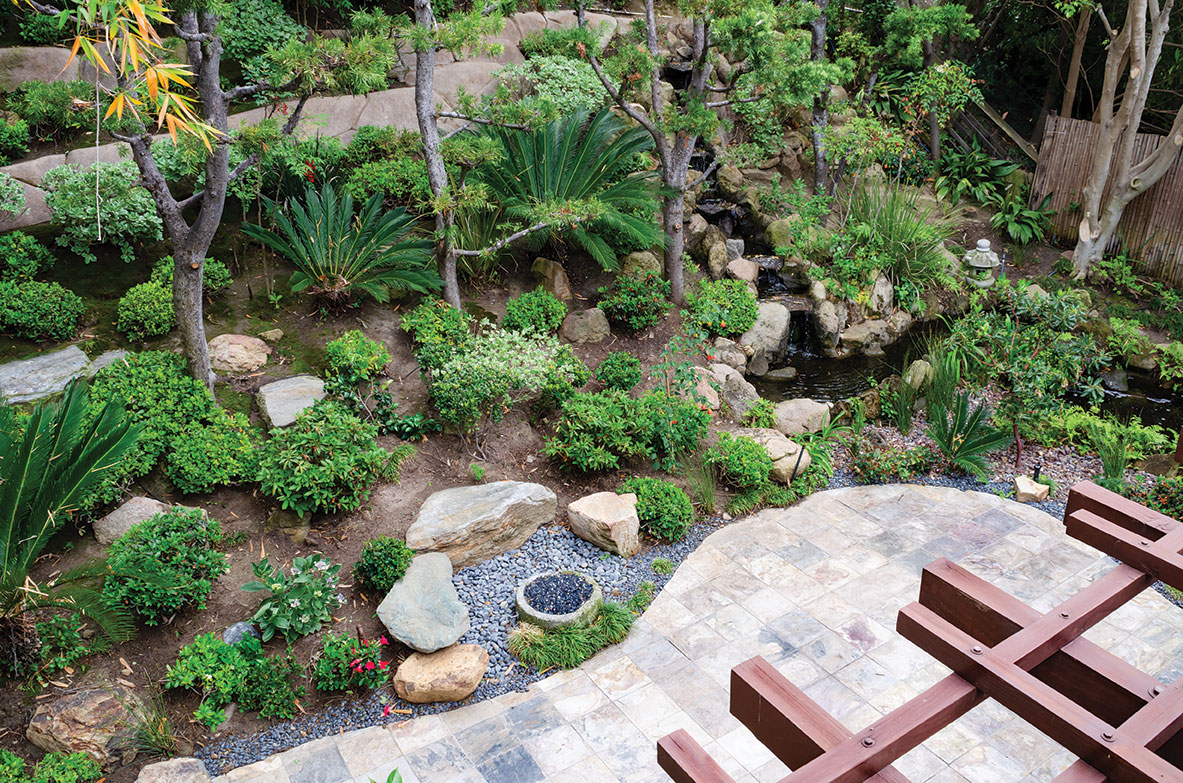 The hill garden provides the perfect location for a waterfall feature. From the pond, a creek runs along the south side of the property

The love of this idea that beauty dwells within the transient and unpolished natural world led to the naming of the couple’s garden: Niwa (Japanese for garden) Wabi Sabi. The name is forever etched upon a granite stone by the home’s entrance in Kanji, the earliest of three forms of Japanese lettering. 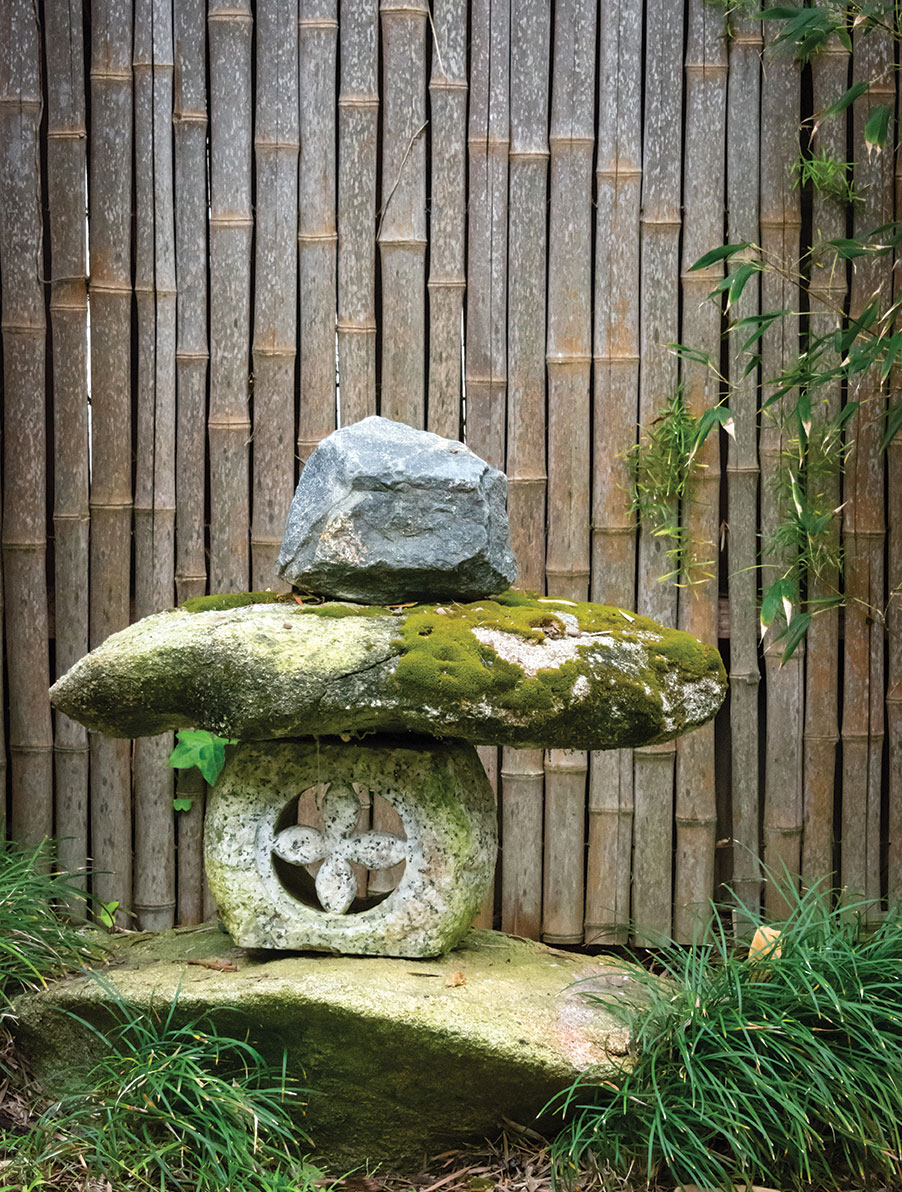 Meditative rocks in the courtyard garden offer one last moment of contemplation before proceeding through the gate to the other gardens.

The front of the residence originally looked like a typical tract home. Now, with its added water feature burbling pleasantly; lush mondo grass growing between the driveway’s concrete; and redwood lattice covering garage doors and used for fences and gates, the new look resembles a Kyoto merchant house from the Edo period. An Indian hawthorne, a dry stream, small maple tree and Japanese stone lantern with a lightbox dating from the Edo period highlight the scene. Feathered podocarpus trees, reminiscent of fluffy clouds, lead to the heavenly courtyard garden, a well-spring of calm and beauty where the largest of the landscape’s black pines showcases its gnarled bark, and a flowering plum tree, a symbol of rebirth, displays its delicacy. 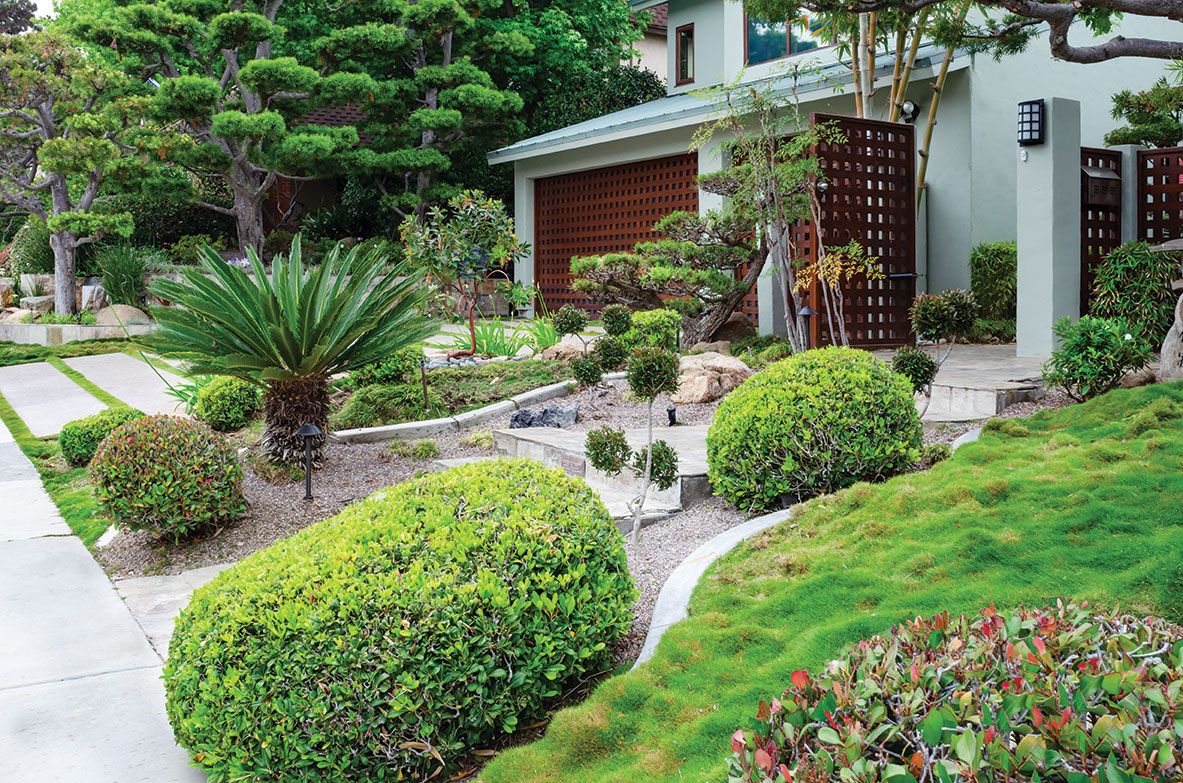 Pruned podocarpus trees travel along a water feature at the side of the house. Lattice on garage doors and fencing gives the impression that the home is a Kyoto merchant house from the Edo period.

“I like the anticipation that goes with that garden,” Michael says, explaining that its purpose is one of preparation. “The courtyard garden also serves as the outer garden of the tea garden. Accordingly, it is both sacred and symbolic. Here, guests prepare themselves spiritually to enter the tea garden. A crouching water basin, fed by a bamboo pipe, is surrounded by stones placed in an arrangement known as tsukubai, where guests kneel to wash their hands and mouths in a purification ritual. Surrounding the basin is a flat stone for kneeling.” 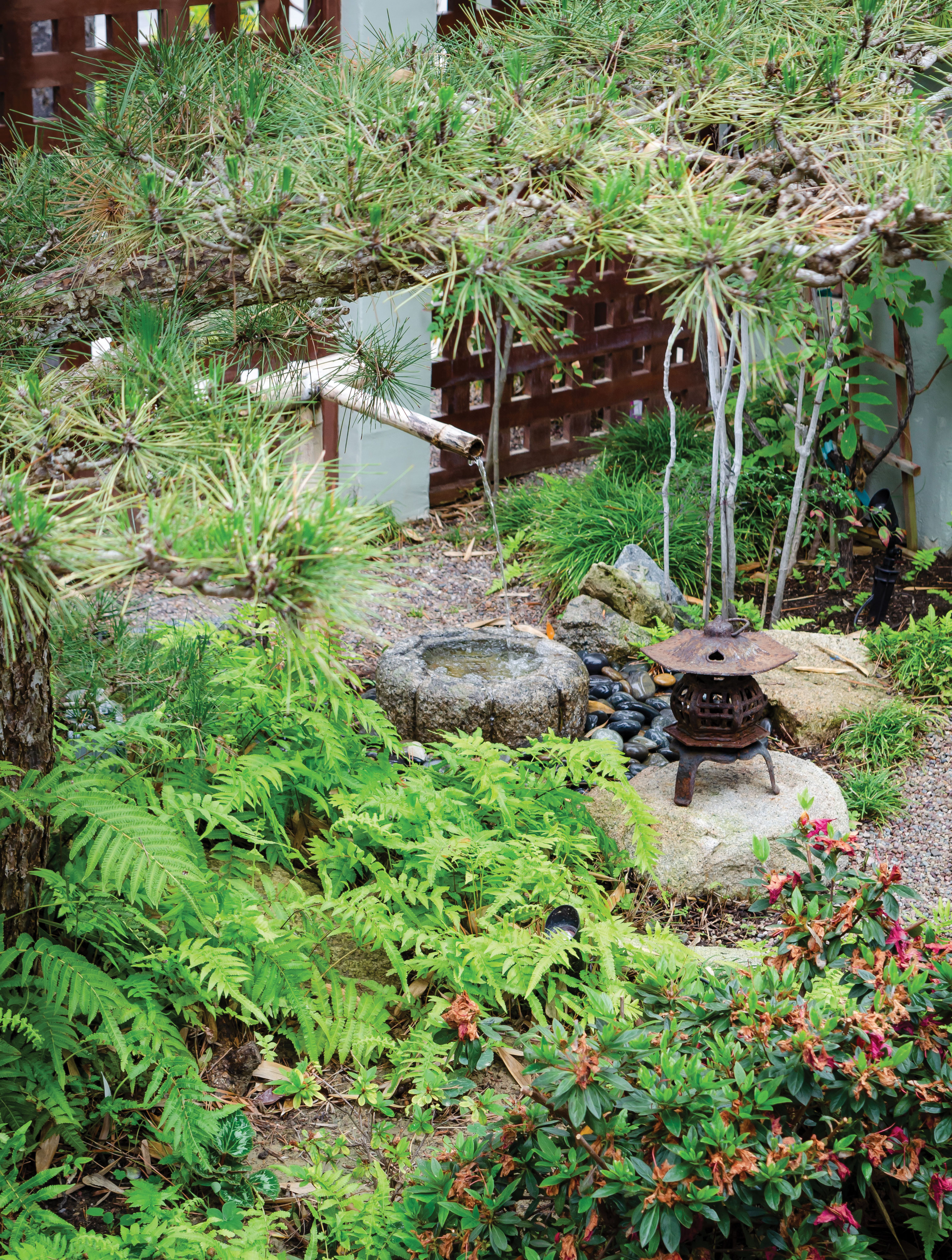 In Japan it is customary to use a courtyard water feature for cleansing before the tea ceremony.

Within the courtyard garden, a stepping-stone path accesses 7-foot-tall elm doors from China’s mid-19th-century Qing Dynasty that “give a feeling of dominance, which is what I wanted in order to emphasize the importance of the psychological transfer from the outer garden to the inner garden,” Michael explains. The doors open to a creek that runs along the southside of the landscape. Toward the center of the backyard lies the magical hill and pond garden and to the north, the sacred teahouse—a small, square redwood structure wrapped with 12 sliding shoji doors—nestles within giant bamboo. 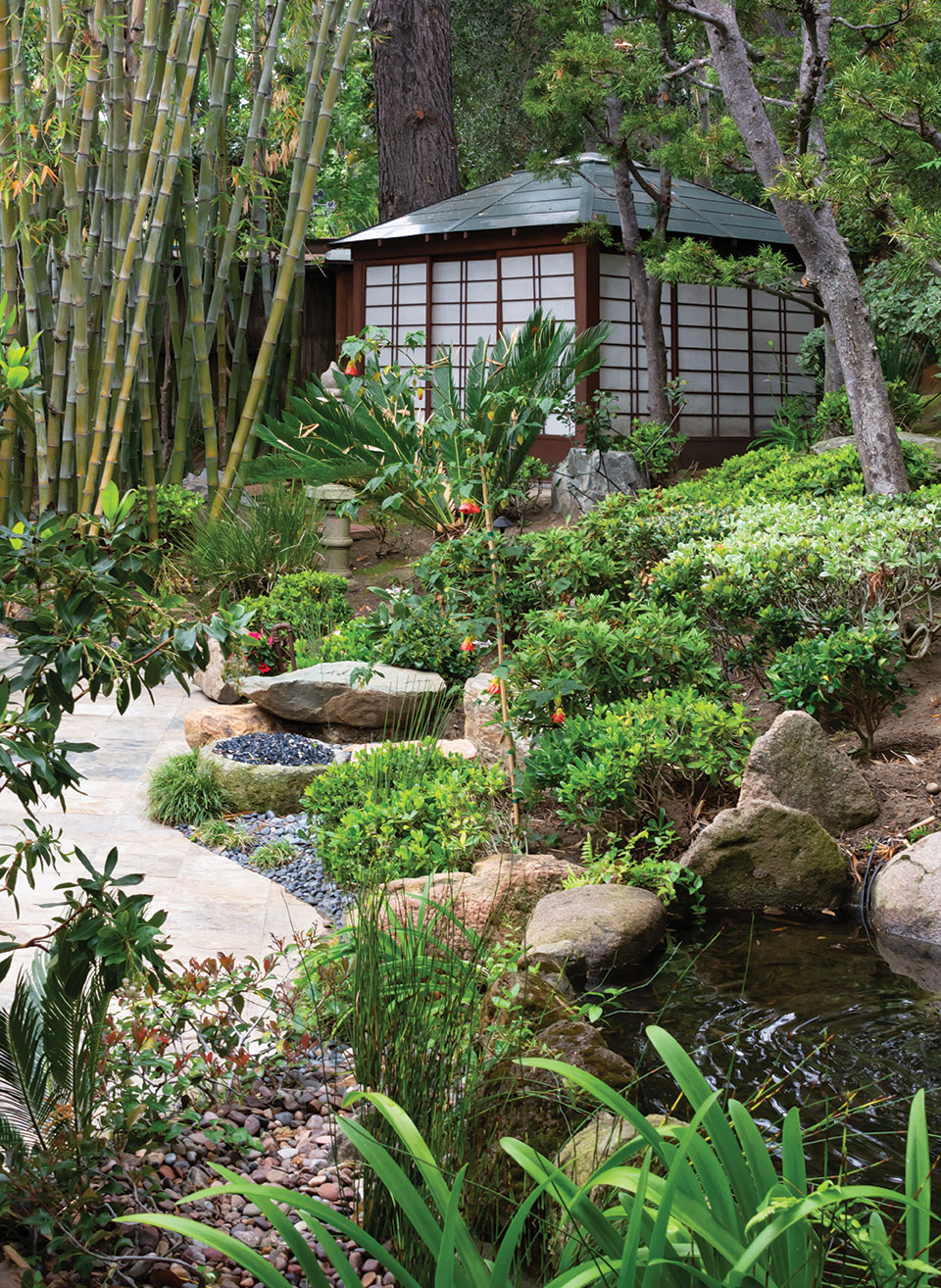 The modest teahouse structure in Michael and Hiromi’s garden echoes the simplicity of a tea ceremony.

“The teahouse gives aesthetic appeal, but [because the area is too damp for rush-grass tatami mats] its interior is not designed for tea ceremonies,” Michael says. “Instead, on the second floor of the residence is a tatami room, designed and constructed in Tokyo, which serves as a place for contemplation.”

Spanning a black-pebbled dry stream, a bamboo-railed bridge leads to the symbolic rocks and raked gravel of the Zen garden. Located on the shady side of the residence, five aqua-colored rocks, placed intentionally to heighten a sense of dynamic balance, float in the sea of gray gravel. 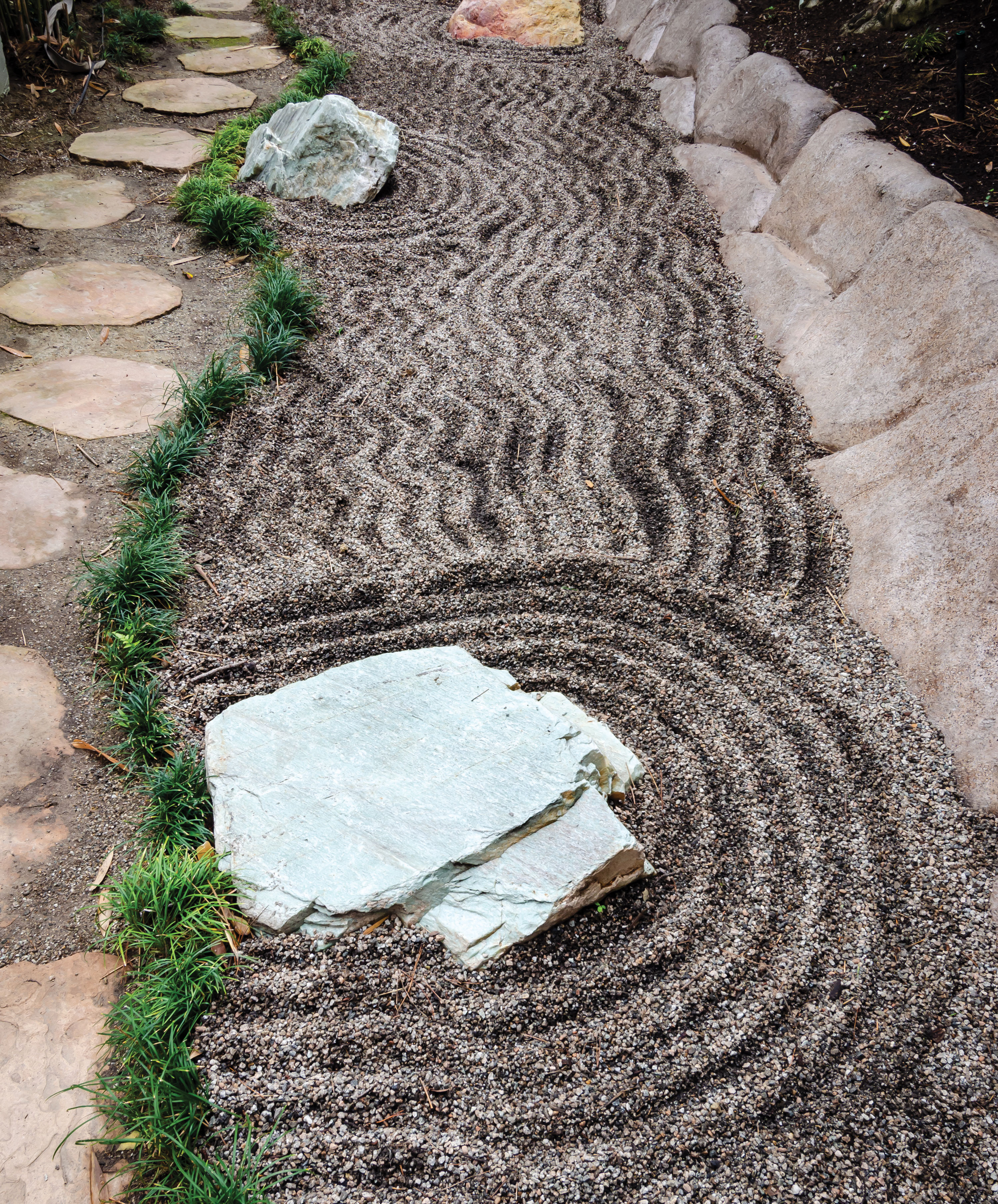 Rocks resemble islands and raking provides the look of sea ripples in the Zen garden.

“I like to get up in the morning and look at the Zen garden’s simplicity,” Hiromi says. “This starts my day in a peaceful way.”

As the CEO of an international education consulting firm, tirelessly connecting Eastern and Western schools as “sister” schools; creating summer camps for exchange students from all over the world; and arranging exchange-student experiences for low-income local kids, “some who have never even been to downtown San Diego and never been on an airplane” to travel on jumbo jets to Shanghai, a peaceful start to her day holds some importance. 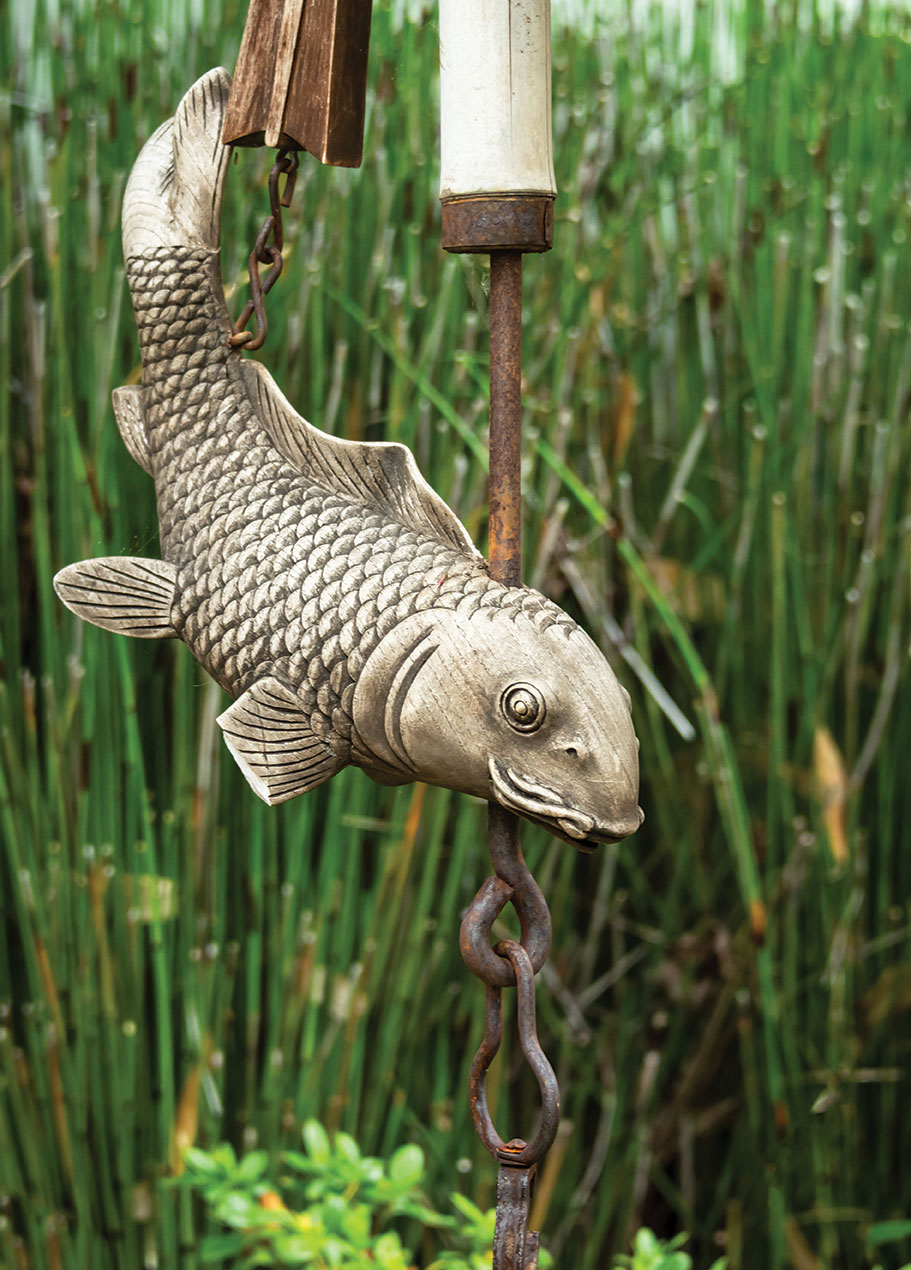 For Michael, who worked as a lawyer for 45 years; wrote two books on education law (and co-wrote with Hiromi the unpublished book Zen and the Art of Japanese Gardening); and  now works on Hiromi’s international contracts, often traveling with her, peace is found perfecting the “imperfectness” of Niwa Wabi Sabi. Although the Japanese garden looks untouched by man, its natural beauty takes constant maintenance and the garden is never done.

“Like other Japanese gardens,” Michael notes in his Gardens of the Year entry, “Niwa Wabi Sabi will reveal its beauty, insights and mysteries on each visit.” 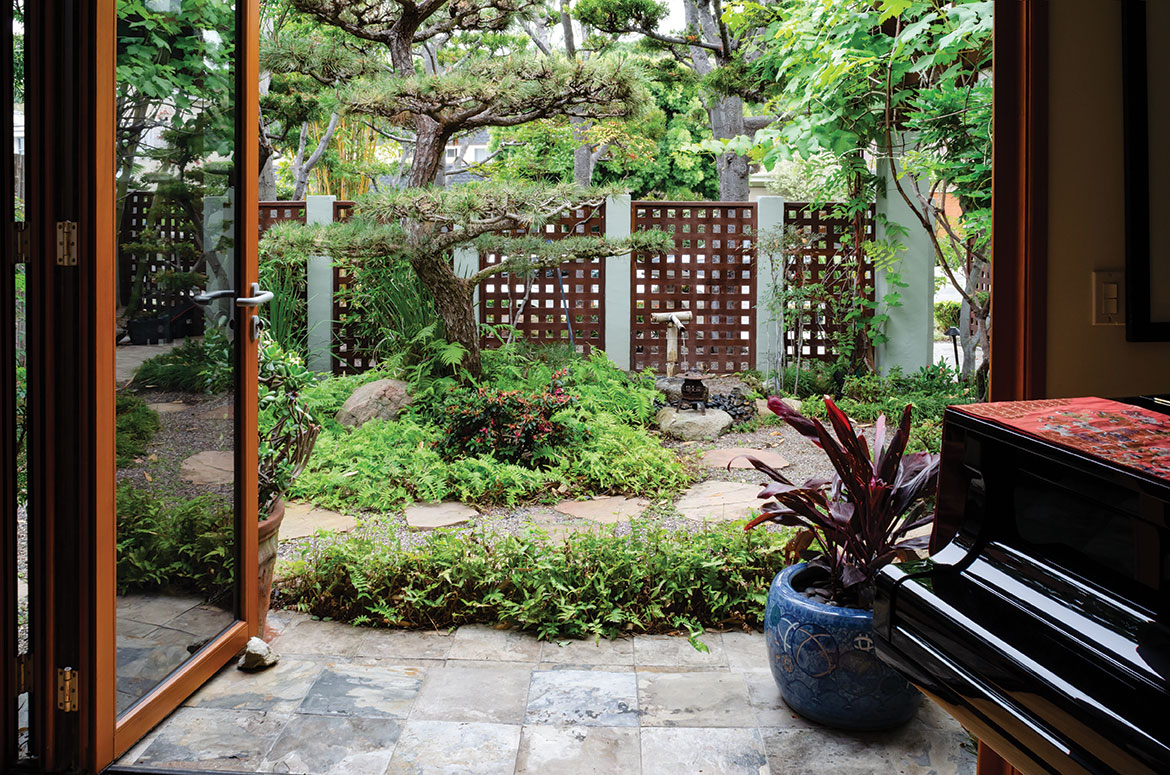 Michael appreciates the spiritual nature of the courtyard garden (seen here from inside the house) where, traditionally, one waits in anticipation to be invited into the teahouse. 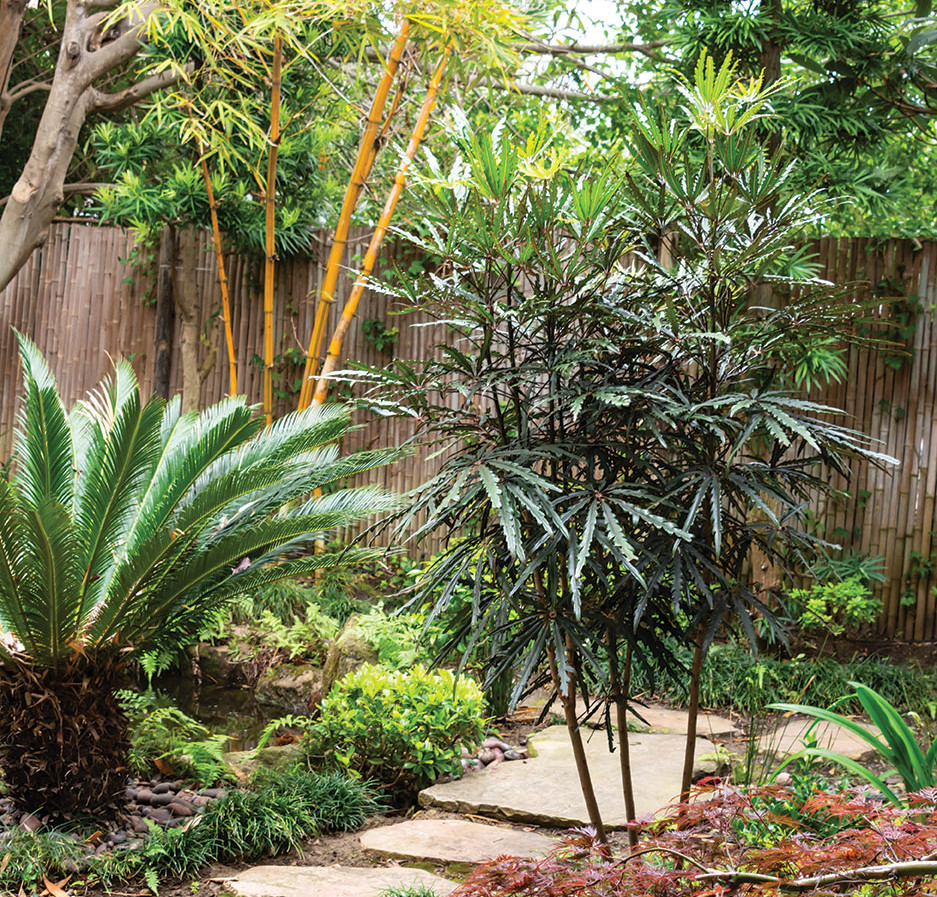 Looking to add some Zen influence to your own landscape? Learn the basics of Japanese garden design, plus learn which plants thrive in San Diego’s climate in our Japanese Garden Design 101 primer.