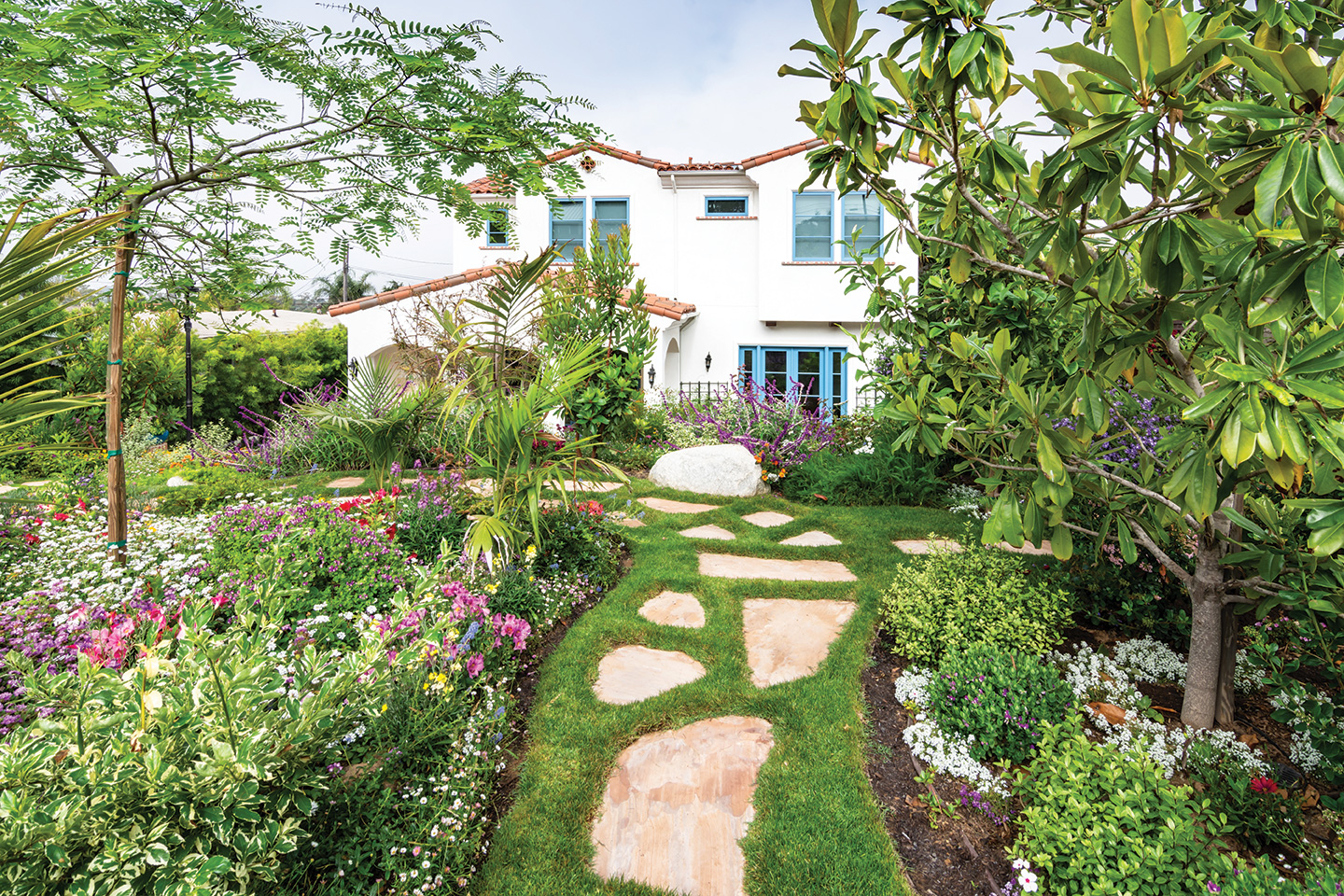 This California cottage garden features a trio of magnolias, a charming path and plenty of blooms.

When Rondi and Richard Prescott sold their business three years ago, they decided it was time for a change. The long-time Poway residents found themselves gravitating to the cooler coastal climate of the beach communities where they met and married in the ’70s after arriving independently from Colorado and Ohio.

They found a Spanish-style, white stucco home in a quiet, transitional Encinitas neighborhood developed originally in the 1950s. Although the house was dated, they knew they could remodel the residence to meet their needs. For landscaping, though, they needed to start from scratch. Excepting three mature trees, after construction they were left with nothing but bare dirt. 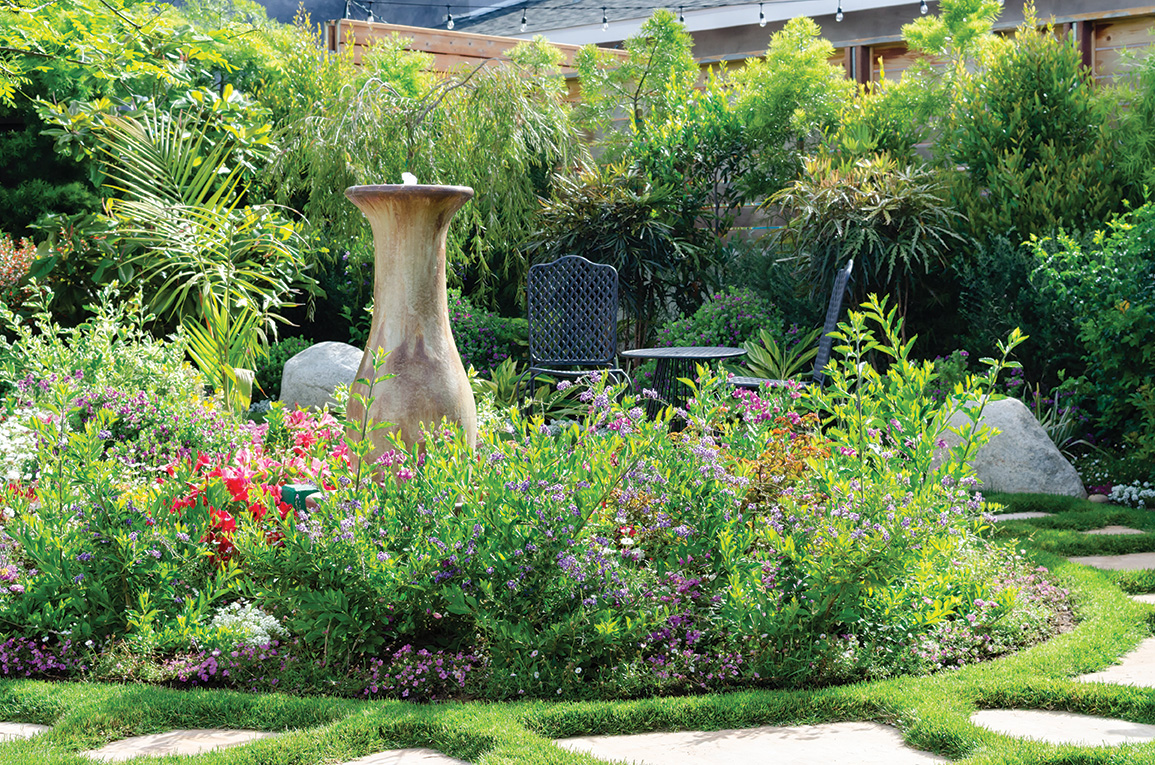 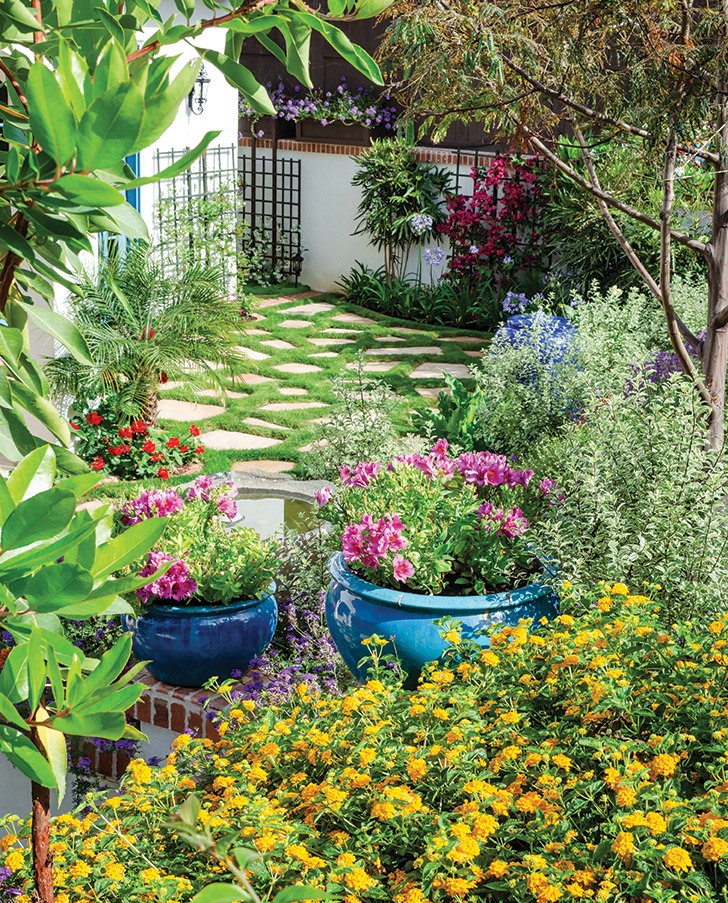 They wanted to take advantage of the mild climate and well-draining soil of their new home to create a tranquil garden refuge supporting a more relaxed life. As hands-on small business owners (they had owned an organic baby-food business) accustomed to doing all their own product development and design, the Prescotts felt comfortable serving as their own general contractors and garden designers.

“After we were bought out, we transferred all our energy to this project,” Rondi says.

For their home, they commissioned a bare-bones design, which they could adapt and embellish to suit their tastes. Richard contributed his construction background, having spent his teens working summers with his Ohio-based masonry contractor father.

Starting with only a rudimentary plan for their garden, the key goal was to attract birds and butterflies. They wanted to create “a serene and peaceful cottage feel, where you can hear the water, smell the blooms and relax and enjoy,” Rondi explains. 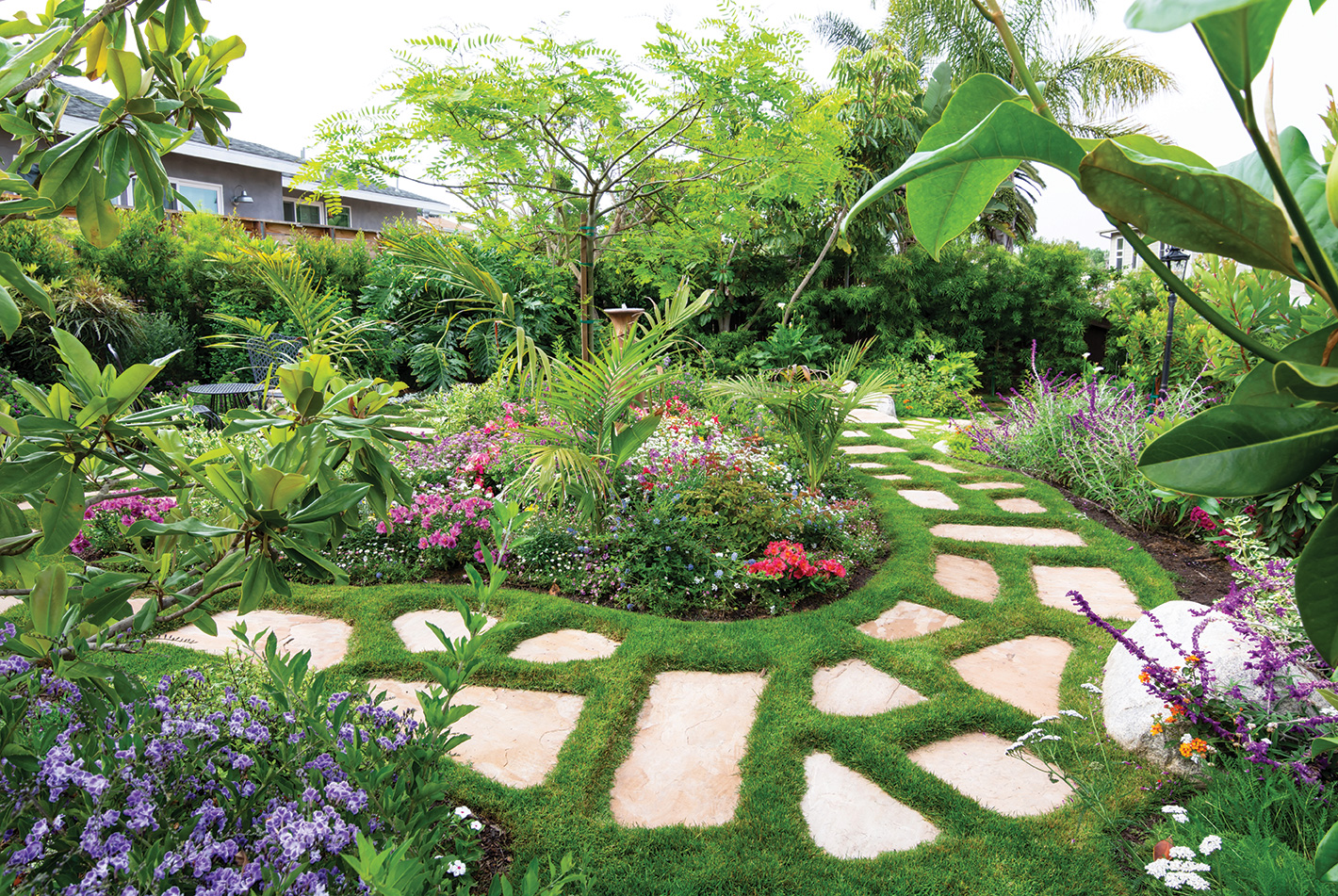 Irish moss grows in the sunny areas around the flagstones.

After consulting with KRC Rock Landscape and Building Materials, they opted to stabilize their property, which backed onto a slope, with rock rather than build a wall, as others had advised.

“We had KRC set the rocks before building the house. It would be hard to get them in afterwards,” Rondi says. Included were large boulders, a stone stairway through the middle of their back garden and a large rock fountain to help draw birds. 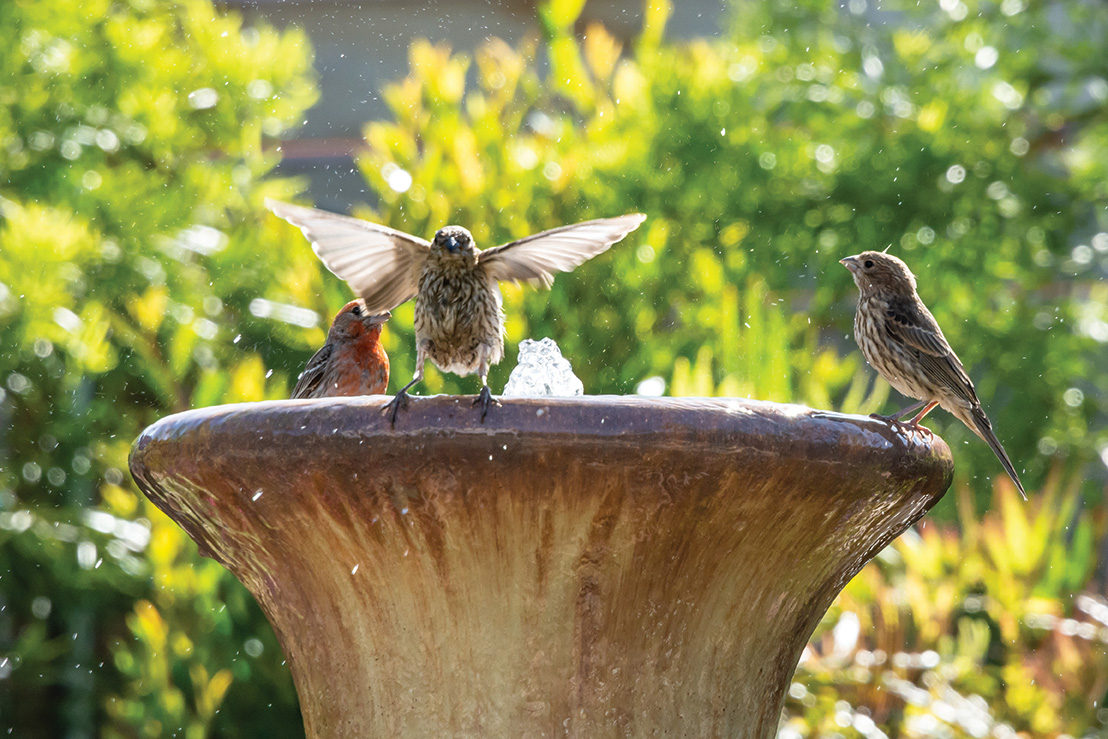 Birds, including finches, love to hang out at the bubbling fountain in the upper garden.

After the house was finished, they developed and planted the garden one section at a time, working collaboratively as they had in their previous business, with each enhancing the other’s ideas. They only brought in help for heavy work, including building the garden walls that they adorned with hand-painted Spanish tiles.

They started their garden by upgrading and painting the fences around the perimeter of the property and planting hedge trees, primarily podocarpus and Texas privet, along the back and side fences for privacy. Next they turned to choosing the plantings for the slope. 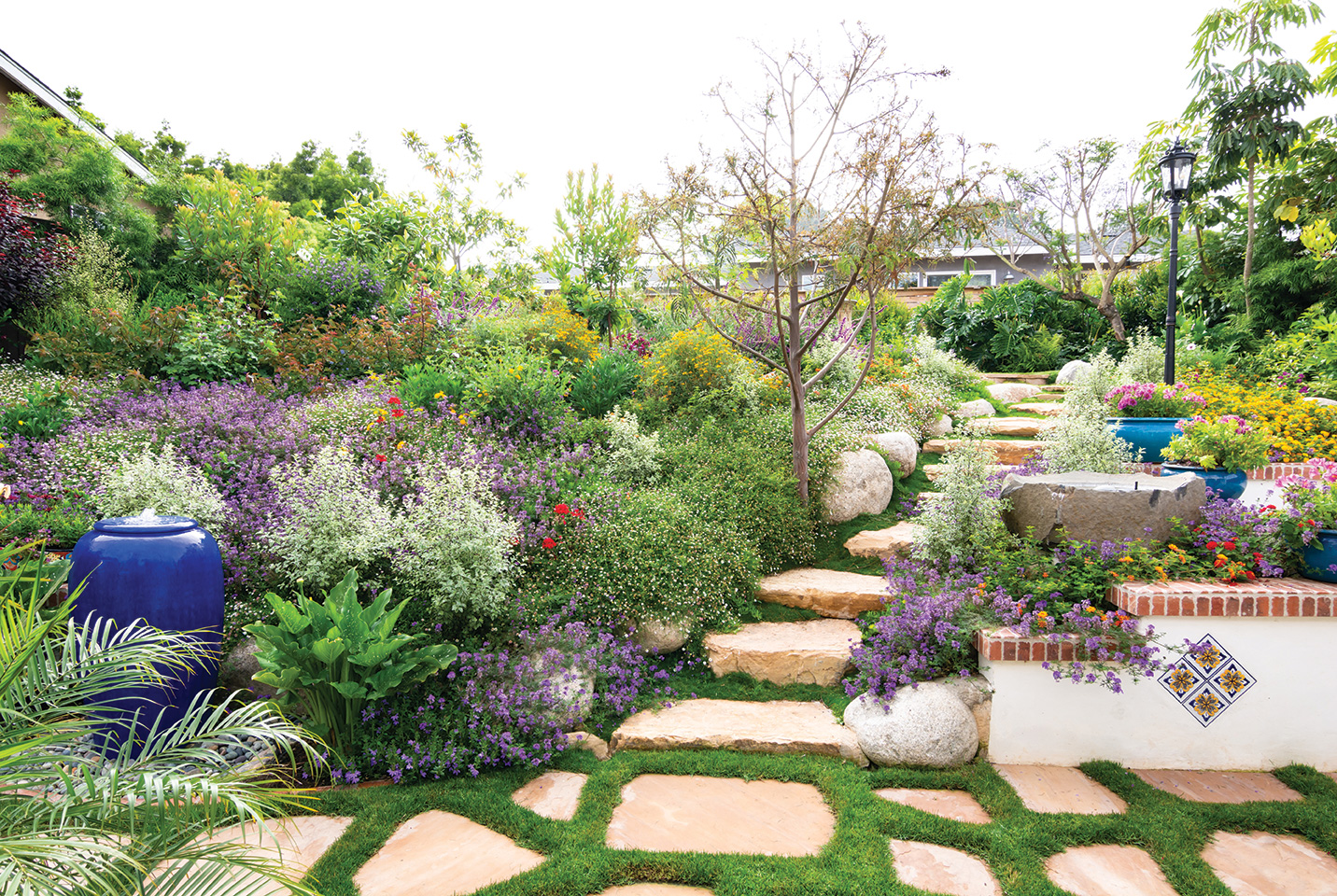 Blue agapanthus and purple Scaevola complement the cobalt bubbler, where black phoebes like to stop to bathe.

“We wanted to get as much dimension and texture as we could to create an artistic feel,” Richard explains.

They took inspiration from their study of European architectural gardens as well as Monet’s impressionist paintings of his sprawling gardens at Giverny, which they saw at the Getty Museum’s Monet exhibition.

“We envisioned the slope to look like a colorful canvas with flowers, shrubs and small trees to add height and visual interest with a touch of whimsy,” Rondi says. 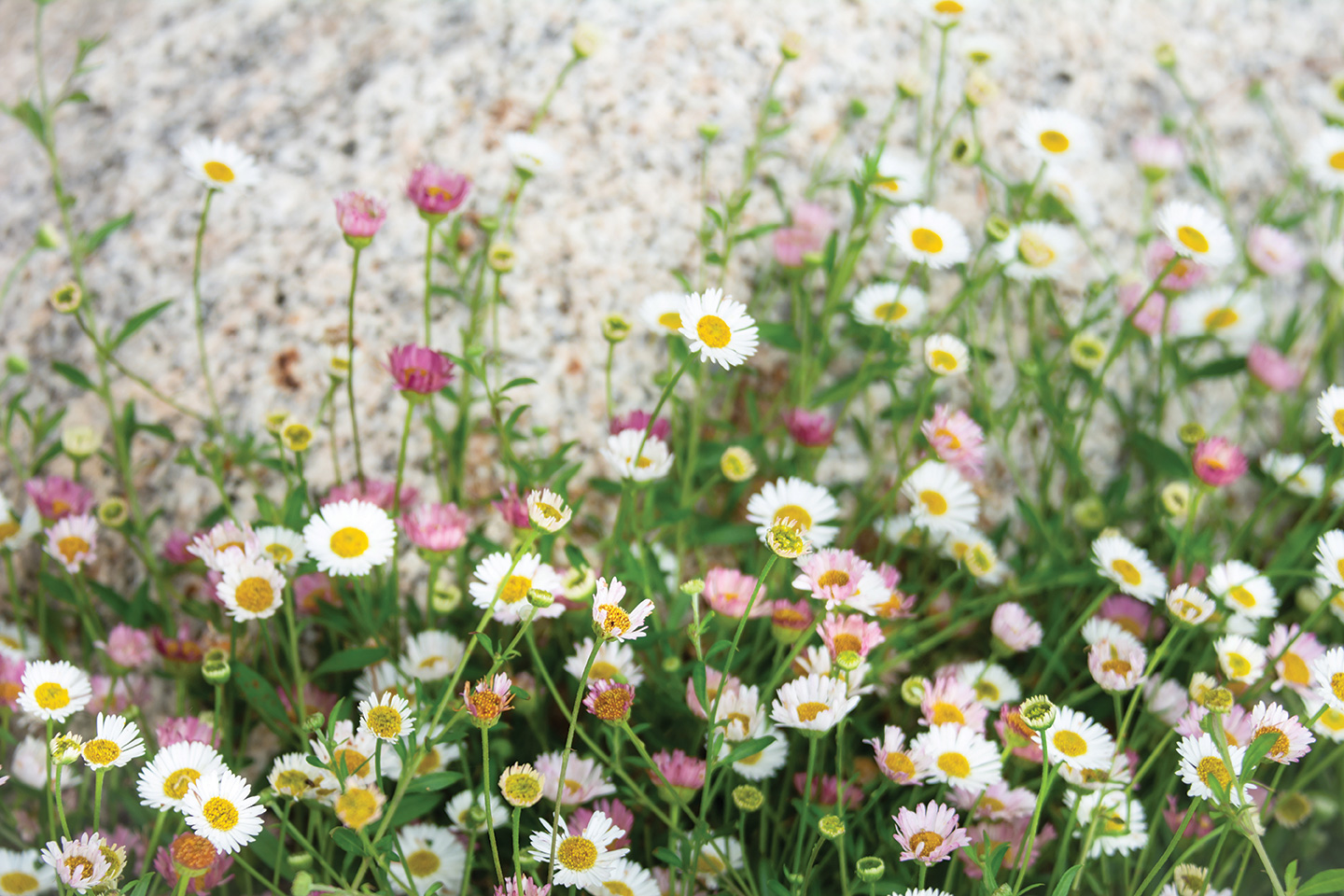 Santa Barbara daisies add color to the garden with near year-round blooms.

They wanted a colorful, natural, sprawling garden. Their criteria for selecting plants (which almost selected themselves, she says) were color, texture, shape, eventual height and dimensions, shade or light requirements, plus ease of care and water needs. The slope now features sweet pea shrubs, bougainvillea, lantana, geraniums, Scaevola and Santa Barbara daisies along with many other brilliantly colored flowers. Wherever appropriate, Rondi and Richard added green and variegated-colored shrubs and placed flower-filled urns. They also planted three grandiflora magnolias and three of Rondi’s favorite strawberry trees, plus a lemon tree. 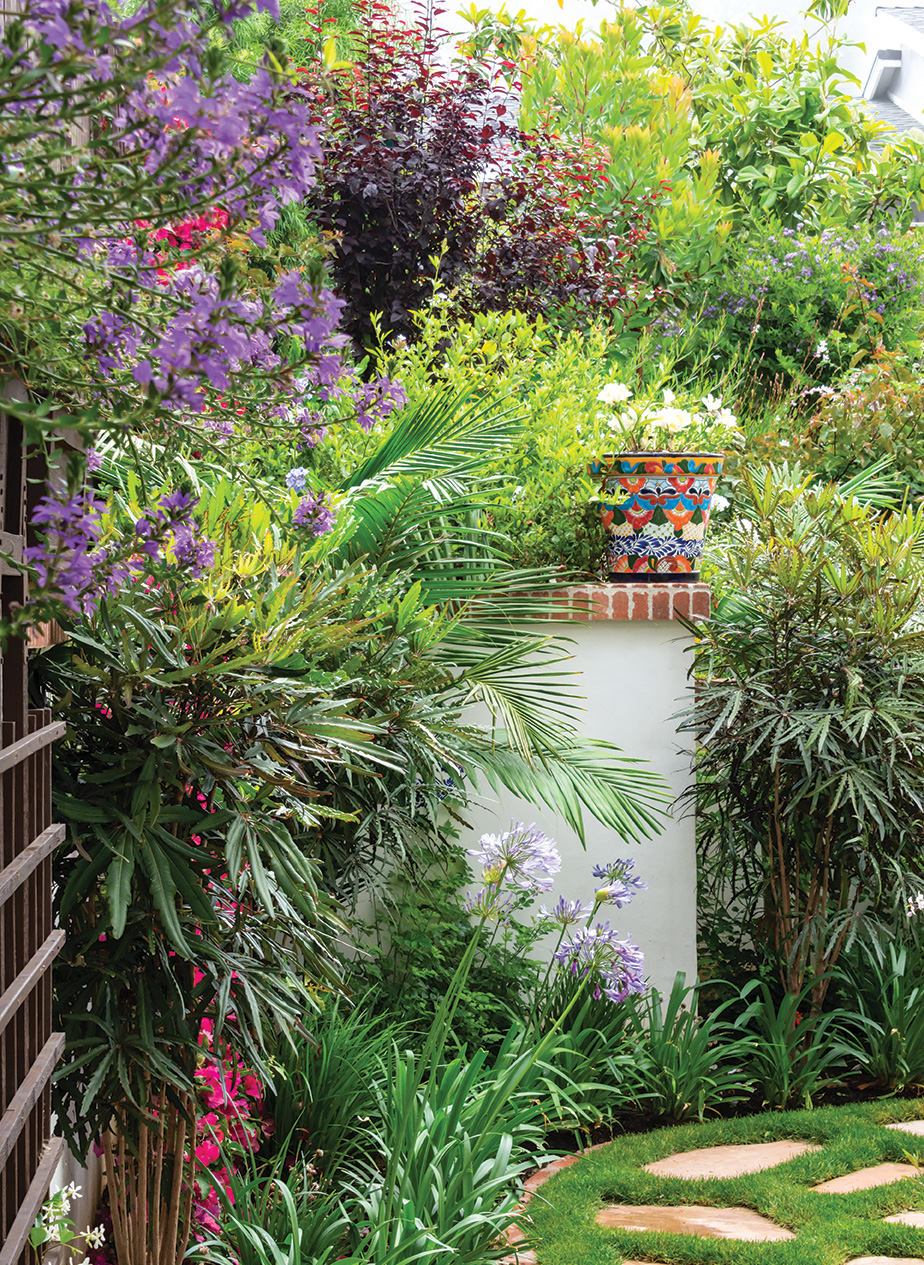 Touches of whimsy combine with the lush plants to set a colorful scene.

Another key goal was minimizing water use while also incorporating the water features they both love, Richard says. They placed a tall vase-shaped bubbler at the top of the back garden, while a massive rock incorporating a fountain attracts birds near the bottom of the stairs. As a focal point, their front garden features a blue-tiled fountain set off by low-growing palms and a hedge of pink powder-puff trees. 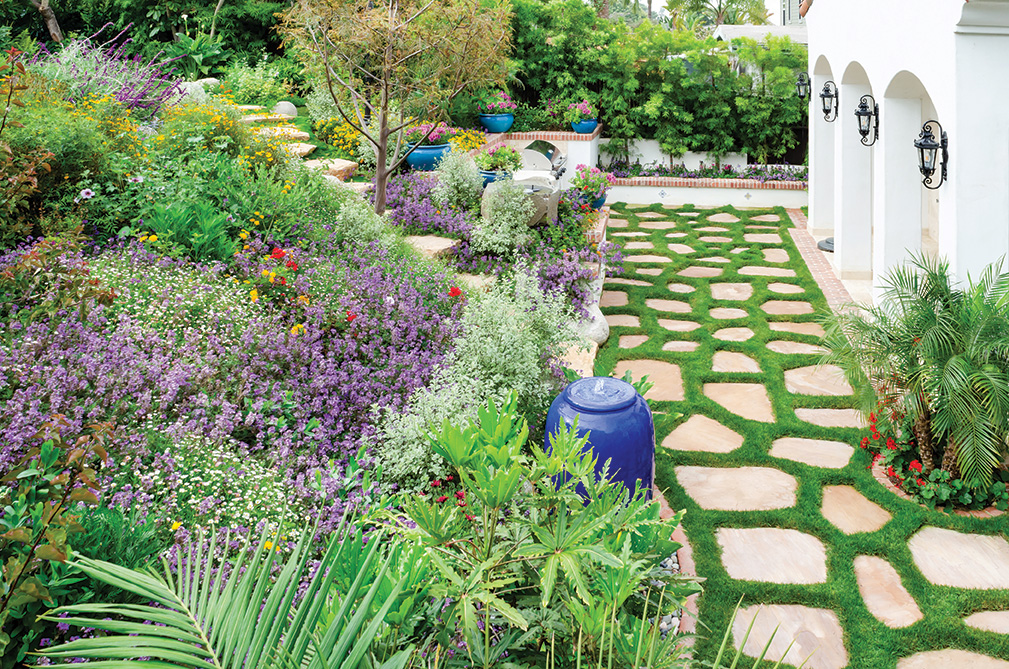 Purple Scaevola combines with ferns, golden lantana and red geraniums to set off the beige of the stone stairway and walkway.

After planting baby’s tears for shady spots and Irish moss for sunny areas between path pavers, they finished their project by adding extra flower boxes and trellises covered with white potato flowers and pink mandevilla.

“When we started the garden we would buy plants in 15-gallon pots. Then, as we filled the garden, we moved to 10-gallon pots and worked our way down to one gallons and cups,” Richard laughs.

“We wanted every space filled,” Rondi adds. “I didn’t want any mulch, dirt or crushed rock.” 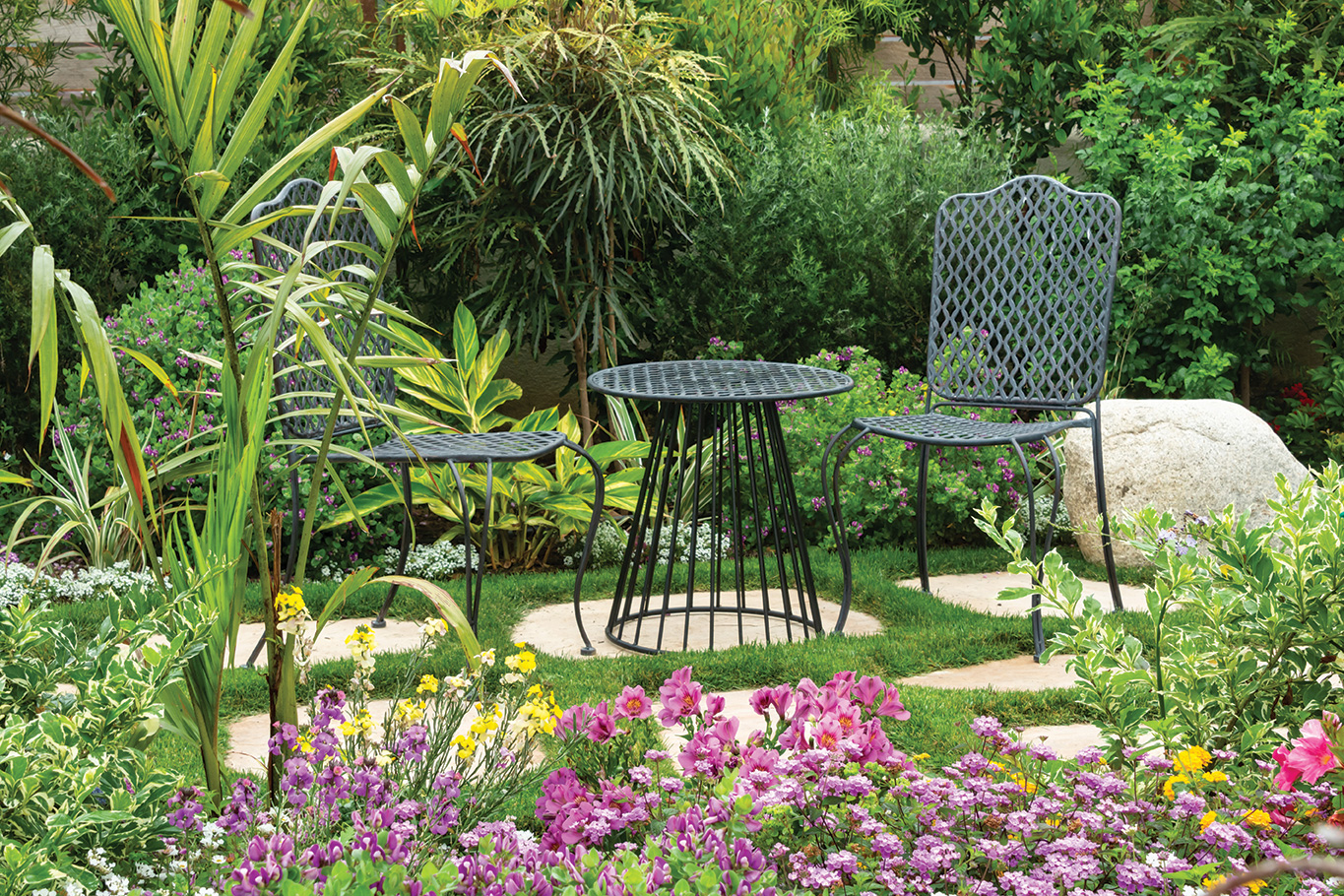 Expansive colorful plantings can be viewed from the seating area at the top of the garden slope.

Now, as they watch black phoebes and finches perch on their fountains and Monarch butterflies flit between flowers, they enjoy the serenity of their completed landscape, content in the knowledge they’ve filled every available nook in their cottage garden.

While working on their garden, they discovered—quite unexpectedly—how much they loved learning about and selecting plants, which quickly took over their lives.

“We never knew until we got into the landscaping how much passion we’d have for it,” Rondi says. 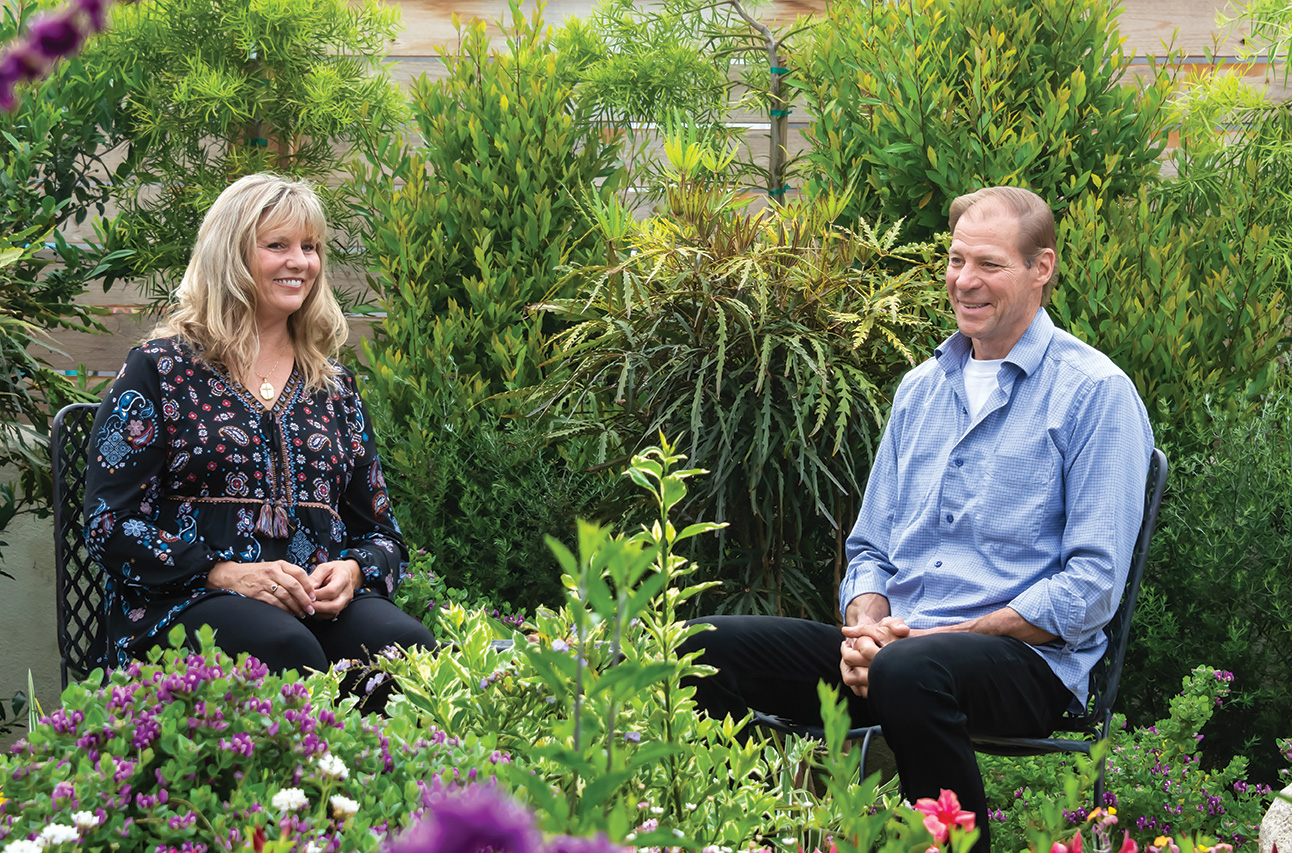