Meet the 2019 Kitchens of the Year Readers’ Choice Winner 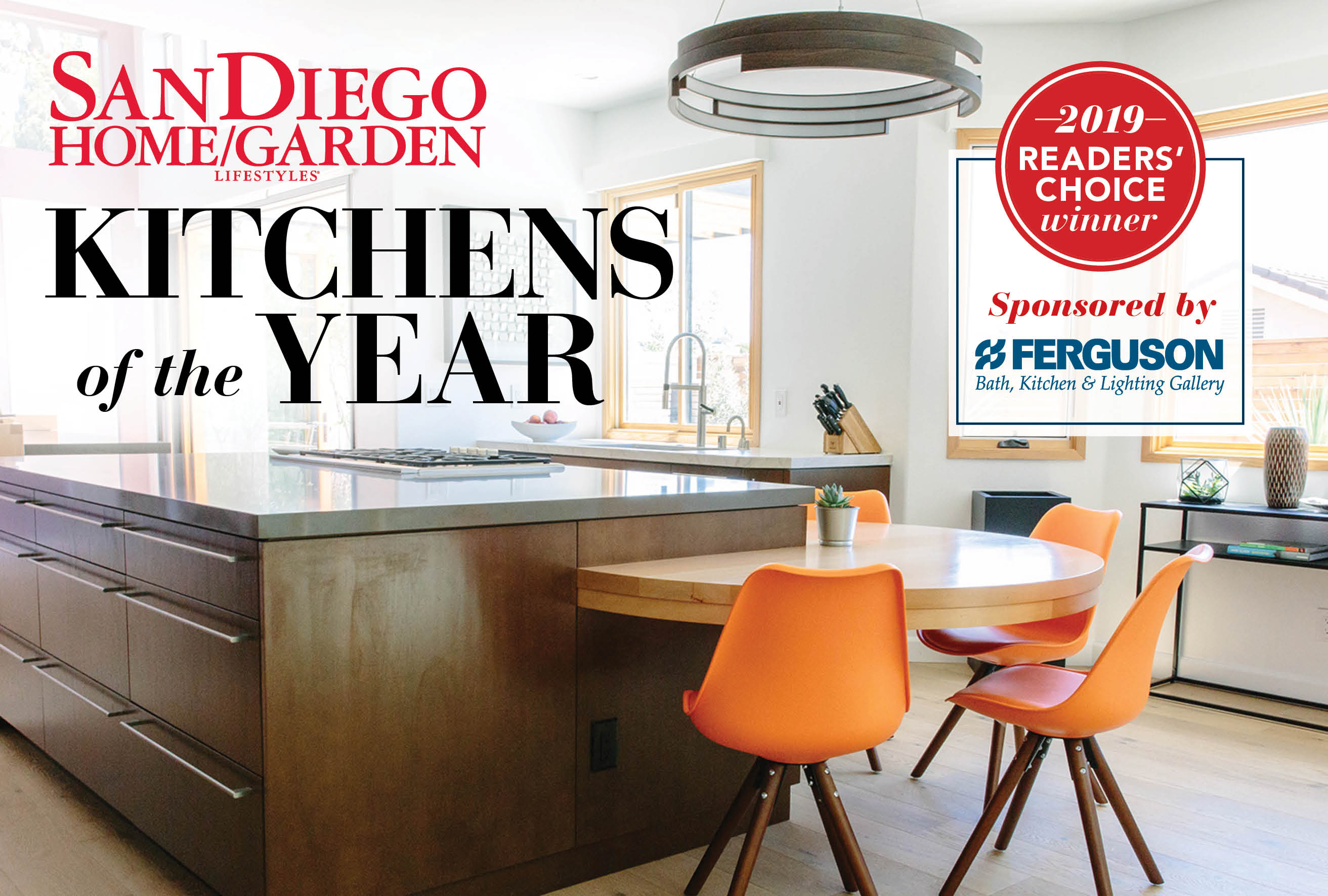 Say hello to the winner of our 2019 Kitchens of the Year Readers’ Choice contest, sponsored by Ferguson. The award-winning kitchen was designed by Amala Raj Interiors.

When beginning a remodel on their Carmel Valley kitchen, Pilar and Dave Dieter turned to some unusual sources. They began their redesign project while living abroad in Shanghai, Skyping with their design team, and in order to see material samples and product inspiration in person, they’d scour industry and design showcases and conventions in the Chinese city.

While exchanging inspiration photos with interior designer Amala Raj Swenson of Amala Raj Interiors wasn’t as quick or thorough as visiting showrooms together, the upside was that their kitchen mood boards took shape largely without the influence of current American trends.

“They were oblivious to the fact that a lot of kitchens in the U.S. were really all white and gray,” Amala says. “It was so refreshing and fun for me that they said, ‘We like color and browns!’” 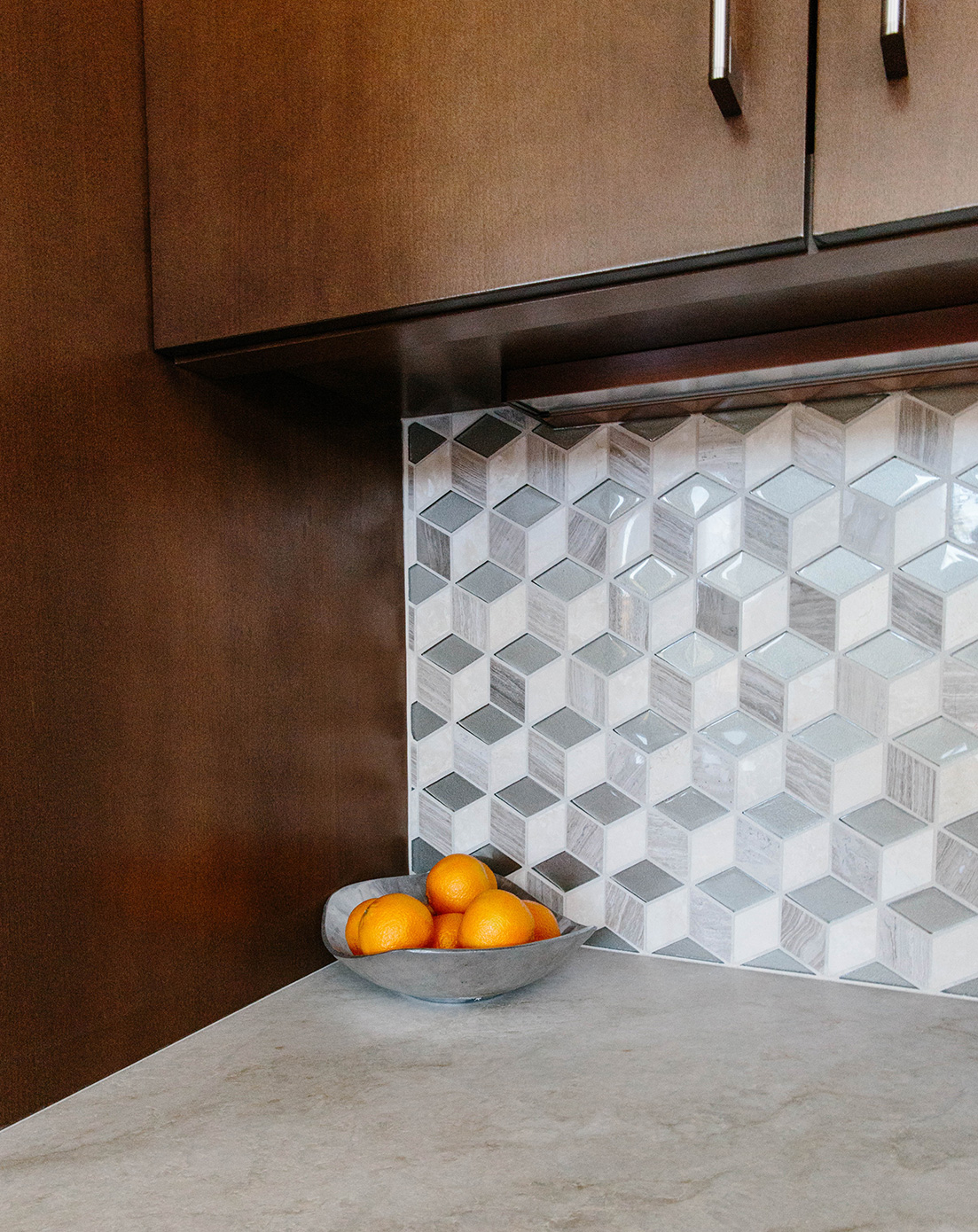 All photography by Chelsea Mudlo.

Because of this overseas influence, the design feels fresh. Maybe the homeowners were ready for fresh: Pilar actually grew up living in the home. Having spent a decade living and working in China, she and Dave were ready to put a new spin on the classic ‘90s tract home, and transform it into a unique, family-friendly place to entertain.

The new spirit is also partially due to its unique inspiration: Big Sur. Many a coastal or California-inspired kitchen picks up on the blues of the sea and the whites of frothing surf, but this home took its cues from the warm woods of the forests. Darker cabinetry, several wood tones and splashes of warm colors like a lavender hue on one wall and orange chairs emulate poppy- and wildflower-studded forests along the coast. 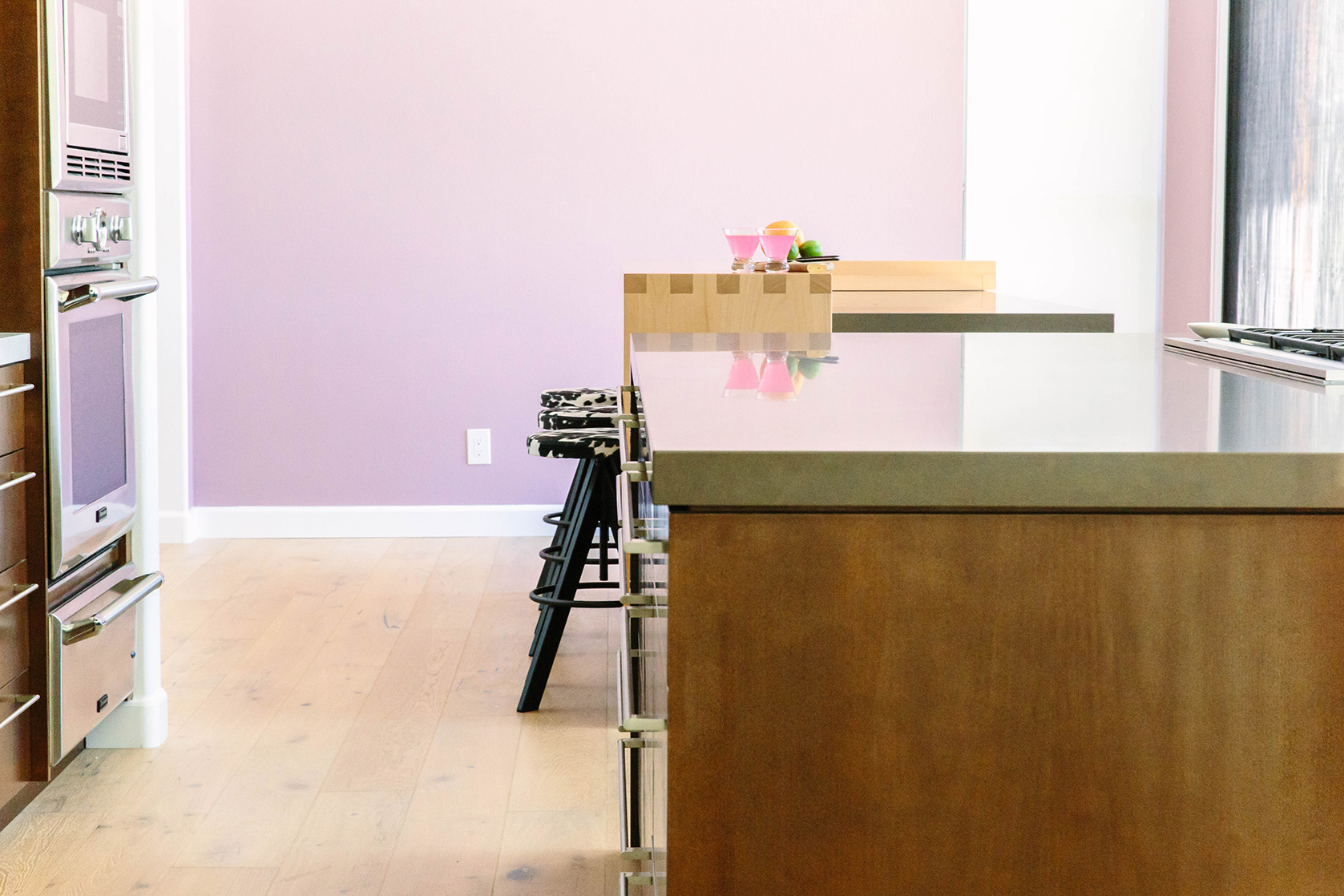 “The hardwood floors that were selected were completely based on certain wood materials you would find,” Pilar says. “You can see the veins from the trees in the floor.” She explains that the idea was to balance a chic, refined look with their Big Sur inspiration. She laughs as she says that this concept helped avoid the look of a “dirty campsite.”

Two sets of large folding doors flank the kitchen, bringing the outdoors in with a wall of glass and extending the room into a larger indoor-outdoor space, with a lounging area, barbeque and fireplace just beyond the kitchen. It also makes a circle, to the delight of the children and their friends (“They just run donuts between the two doors,” Pilar says). 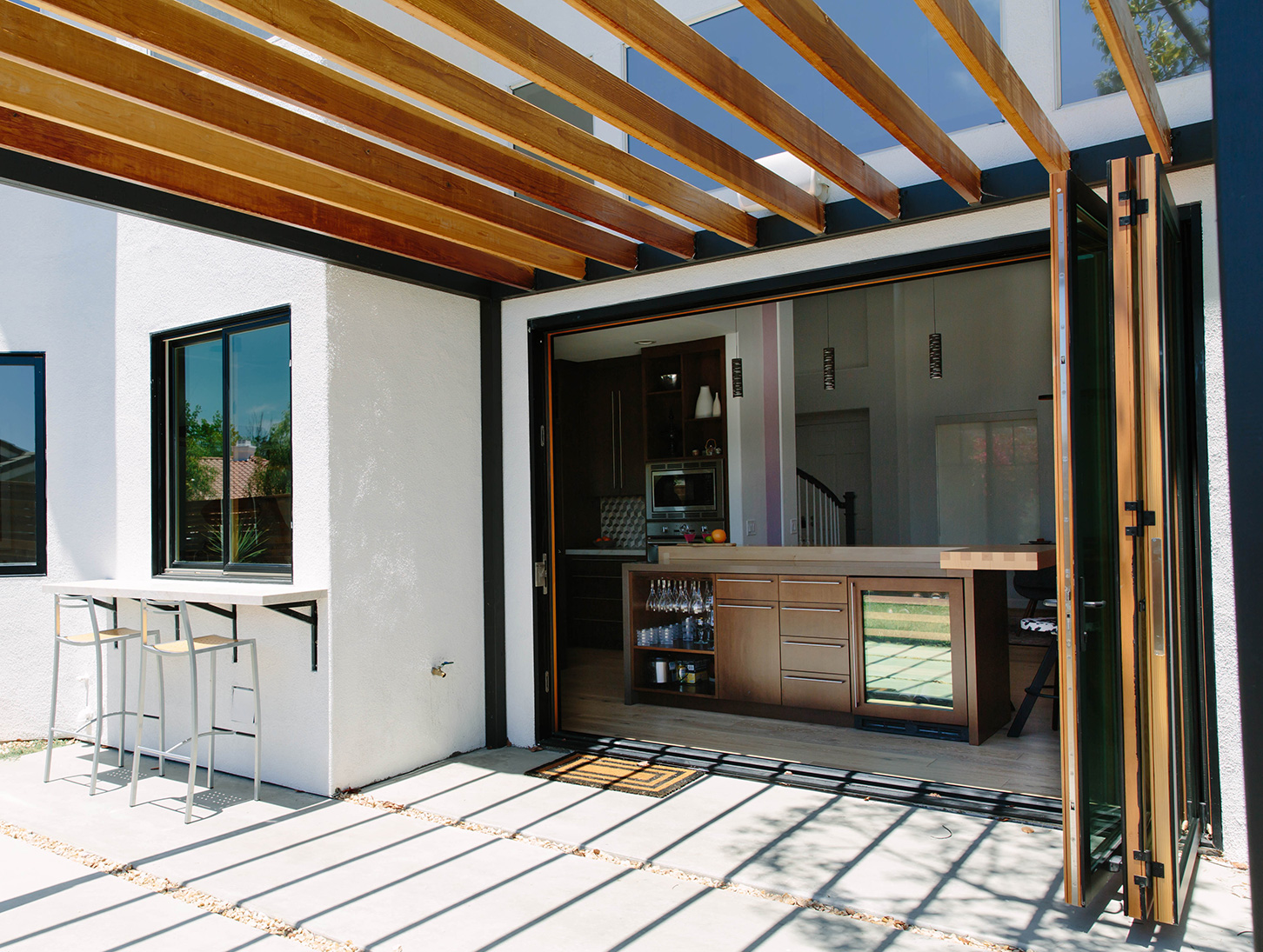 A standout feature is the “floating dinette,” a round table seemingly protruding from the kitchen’s main island. It’s the family’s hub, referred to by Pilar as the homework area. The kids can sit nearby while mom and dad are in the kitchen working on dinner. “We can stir something on the stove and then go over and help with math,” Pilar says. 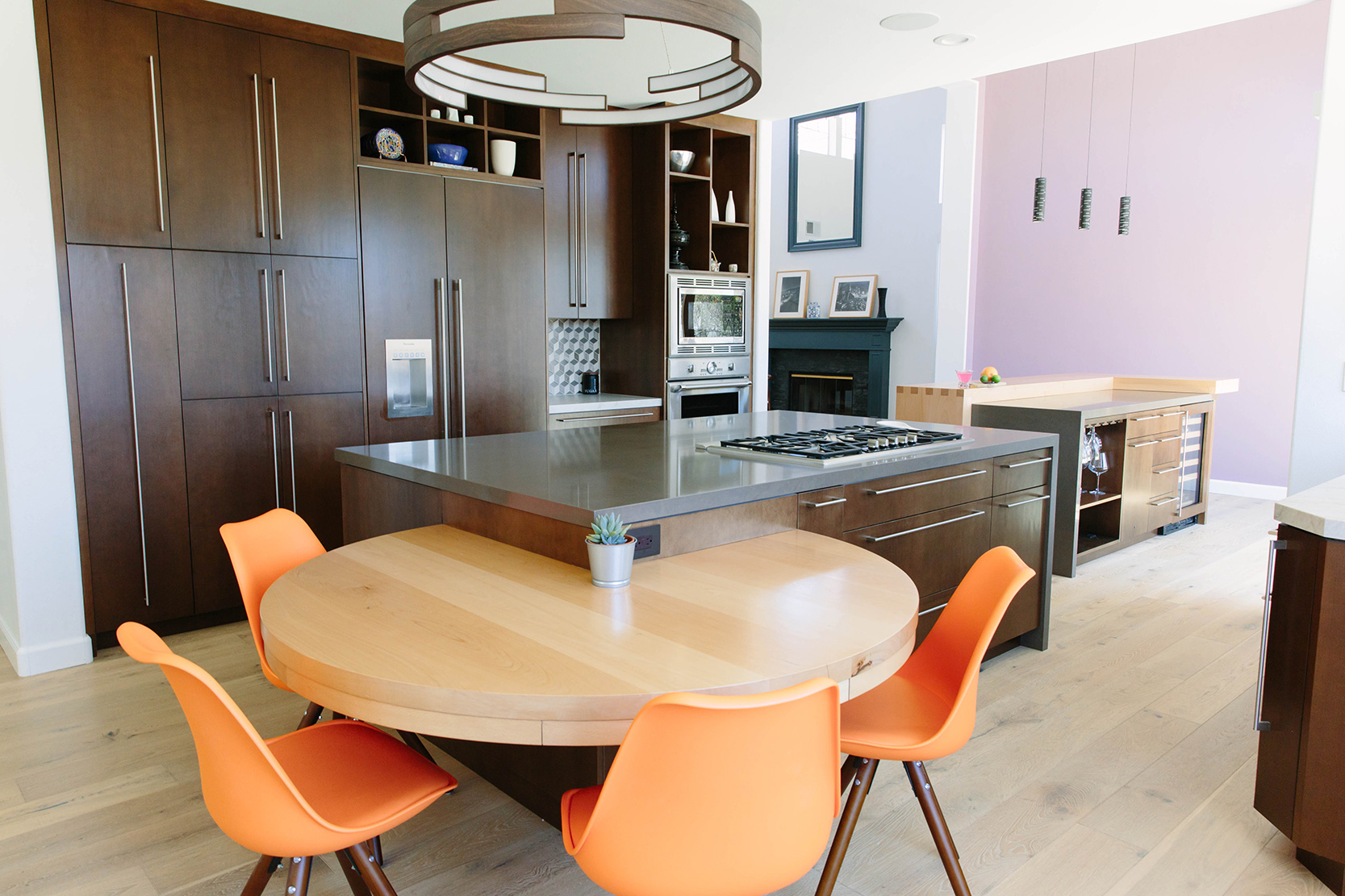 The contractor for the project, Steve Coss from Coss Construction, convinced the family to wait until their return to San Diego before beginning the actual work on the kitchen. While Pilar and Dave wanted to come home and set foot in their newly remodeled, finished kitchen, Steve wanted them there for the process. “He wanted us to make decisions on the fly,” Pilar says. “Steve doesn’t do multiple jobs at the same time. He was here every day.” His insistence on this impressed them, and they quickly realized it was the right decision.

Besides, the trans-oceanic photo swaps weren’t ideal for making final material selections, and as soon as the family returned to the States, Amala took them to design studios and showrooms to make final selections. 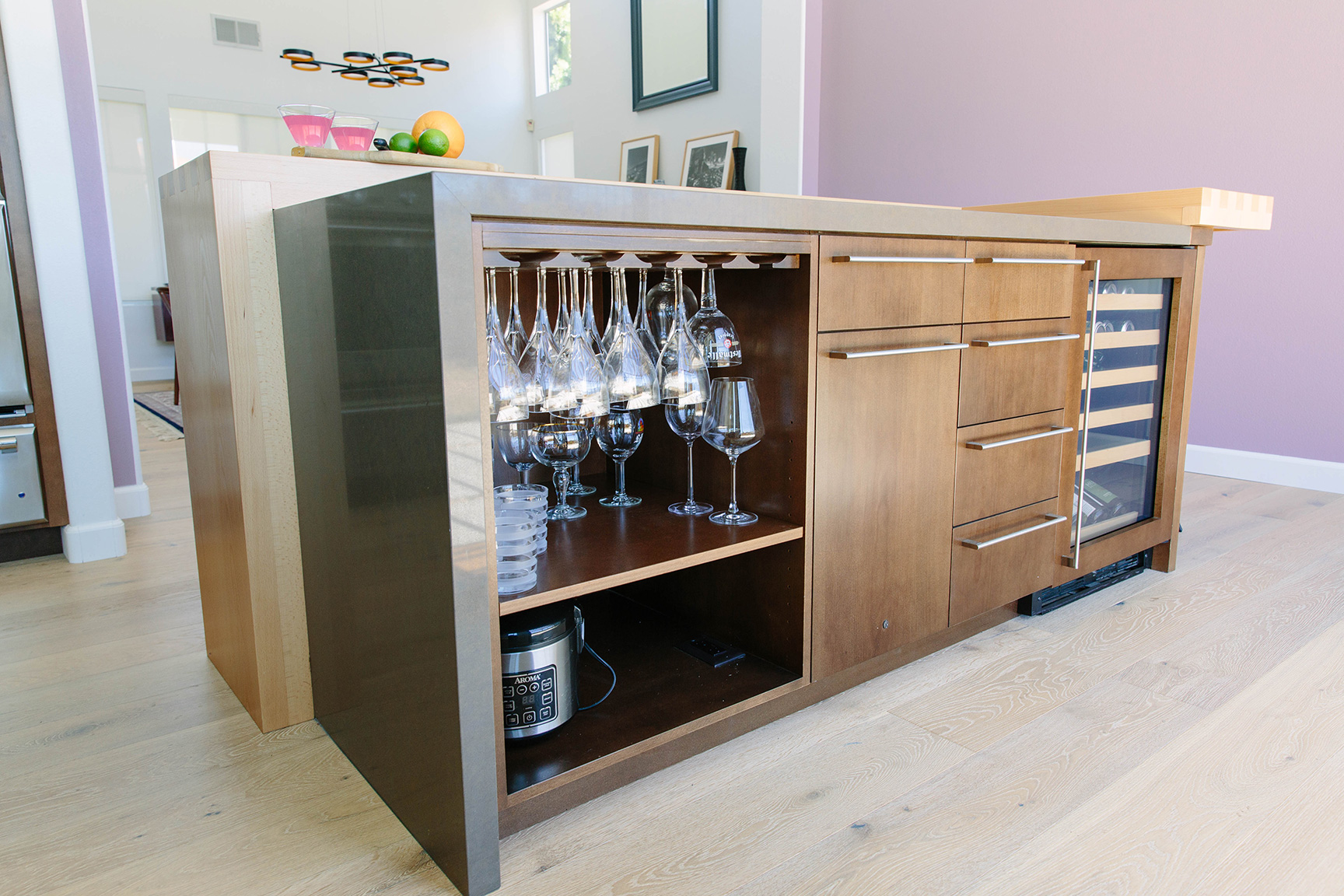 Natural woods, a weathered quartzite countertop, the floating dinette and a matching floating waterfall countertop adjacent to the bar area combine organic materials with sleek and unique features. With the organic, Big Sur-inspired design, Amala wanted to add modern touches, rather than lean into a more rustic or traditional aesthetic. “So I brought in funky light fixtures,” Amala says. Above the floating dinette is a large, non-traditional wooden chandelier, and three smaller, similar pendants grace the bar.

The remodel put a unique spin on the standard, tract-style home. “Most designers would have looked at this house and said ‘I don’t want this boring project,’” says Pilar of working with Amala. “She was able to create something unique.”

The formerly closed-off kitchen is now part of a colorful open space integrated with the outdoors—and just as ready for homework and meal prep as it is for fun, play and running wild. 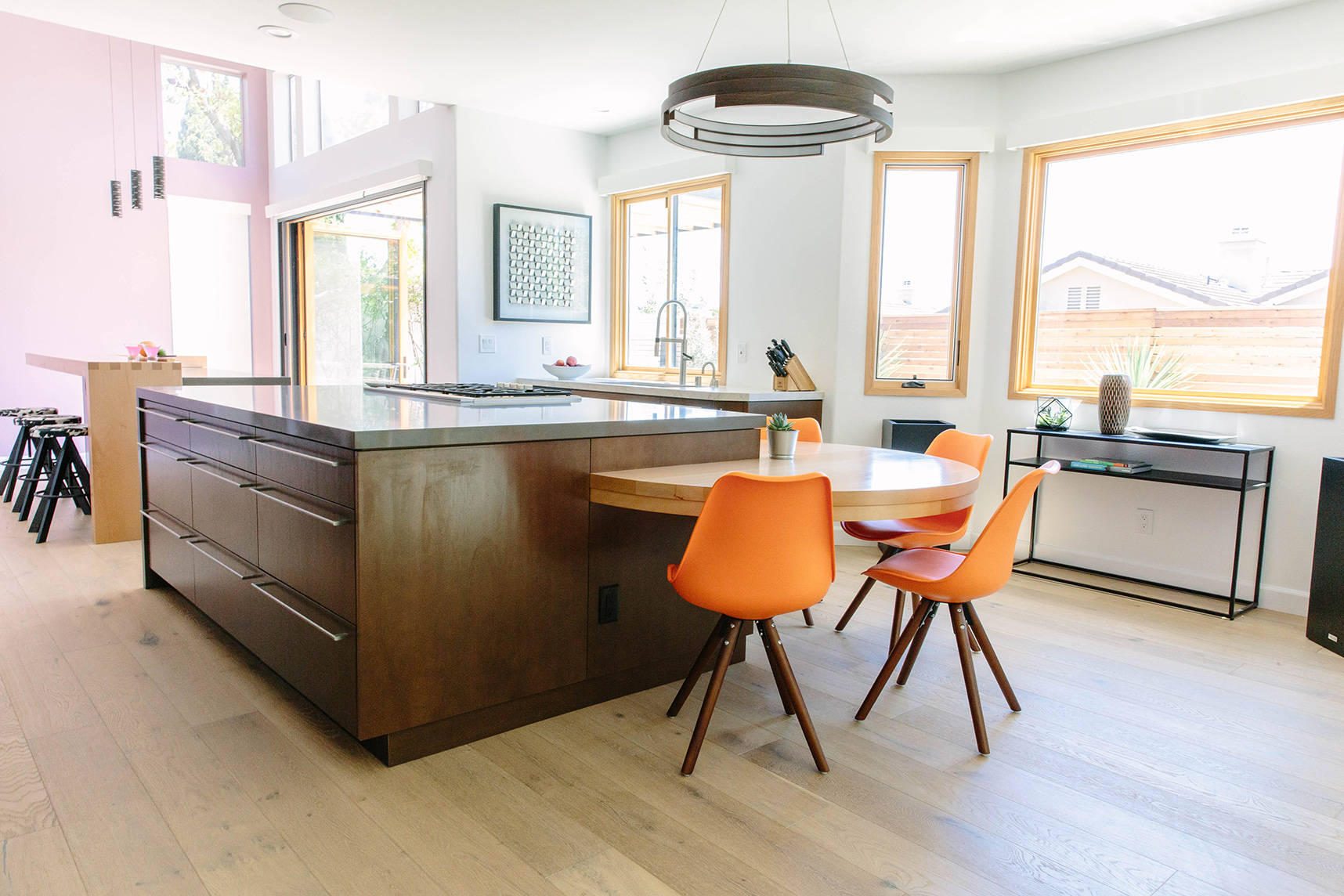