This Living Vehicle Is A Tiny Home on Wheels 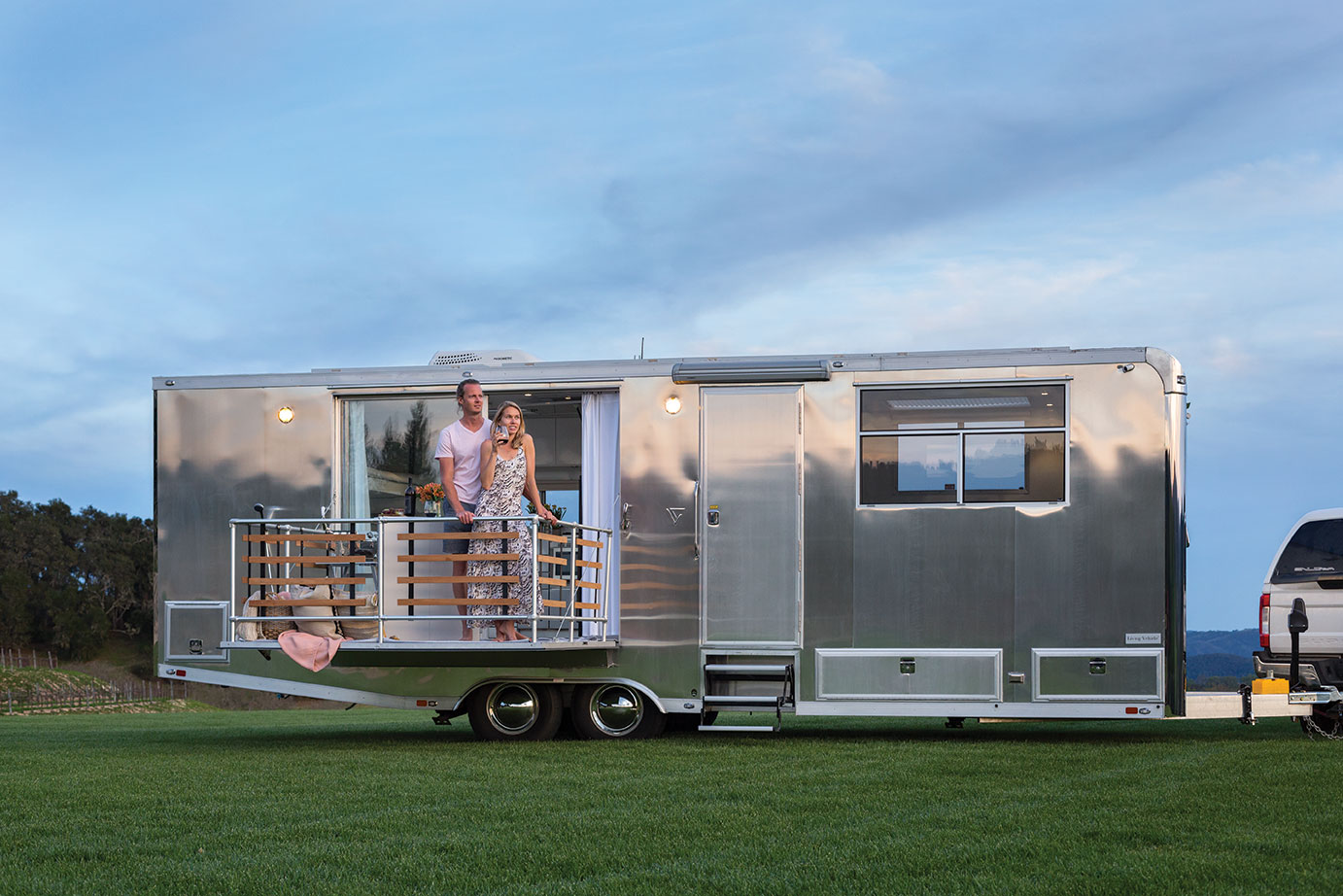 Matthew and Joanna Hofmann, creators of the Living Vehicle, enjoy a sunset view from the deck of their tiny home trailer. Photography by Matt Wier.

Standing 6-foot-5 inches in stocking feet and with the innovative smarts to design any home of his liking, you wouldn’t think architect Matthew Hofmann would choose to live full-time in a 200-square-foot mobile home. But he, his wife Joanna and their miniature Australian shepherd Luca do. Just as glamping and tiny homes were becoming all the rage, and the cost of buying a home—especially in Southern California—was becoming outrageous, the couple brainstormed how they wanted to live and hatched a plan. 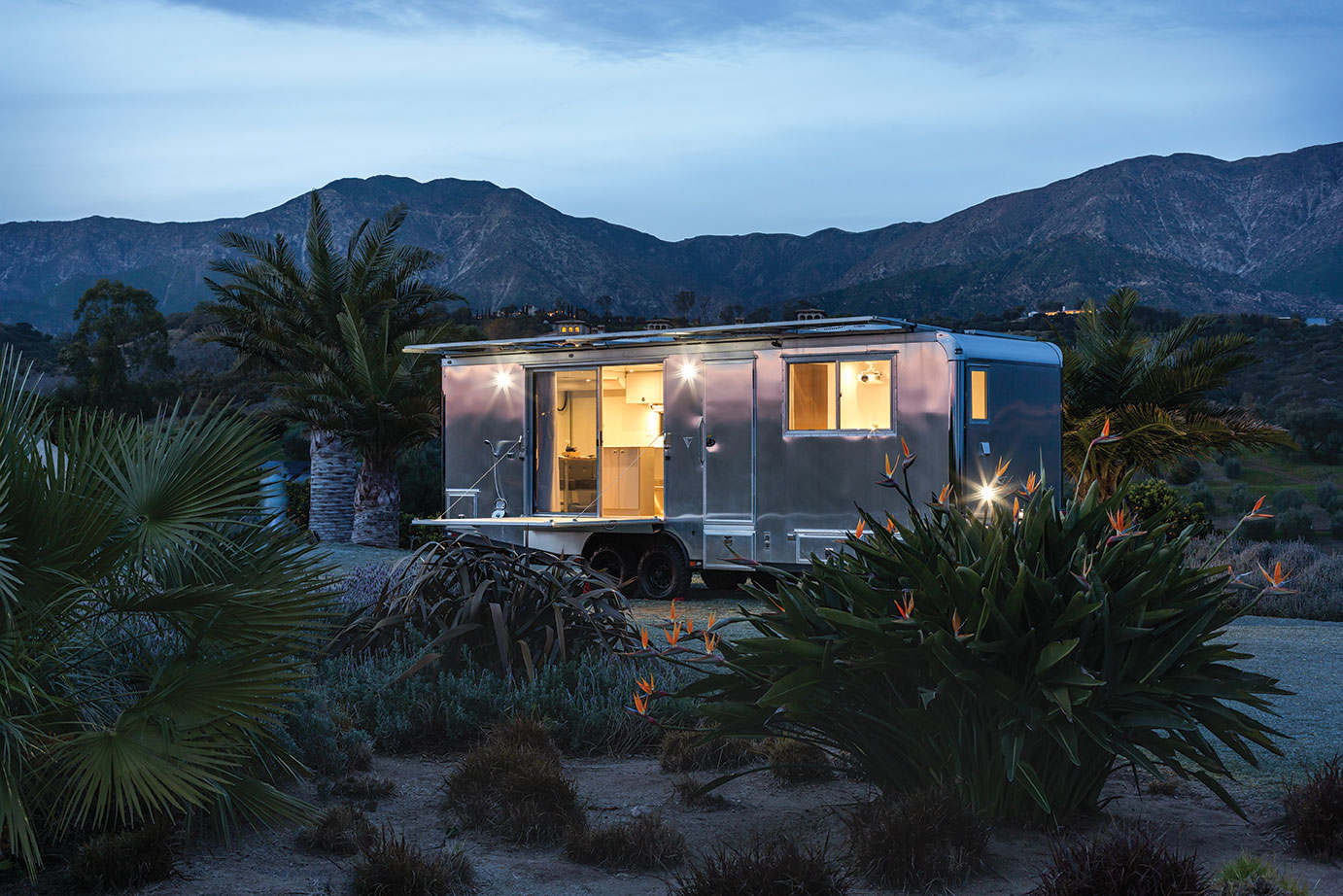 As dusk becomes night, adjustable lighting throughout the Living Vehicle creates whatever atmosphere Joanna and Matthew want in their home on wheels. The mobile unit uses aluminum for its frame and chassis as well as its exterior. “Aluminum is one of the most abundant elements found on the earth’s crust,” Matthew says. “It lasts a long time and doesn’t require maintenance because it creates an oxidized layer on the outside that protects it.”

“We wanted complete freedom and independence,” Joanna explains. “Rather than being reliant on a conventional campground to plug things in, we wanted the flexibility of going somewhere beautiful—a ranch, a vineyard, anywhere wonderful—while being completely self-sufficient and having all the comforts of home.” 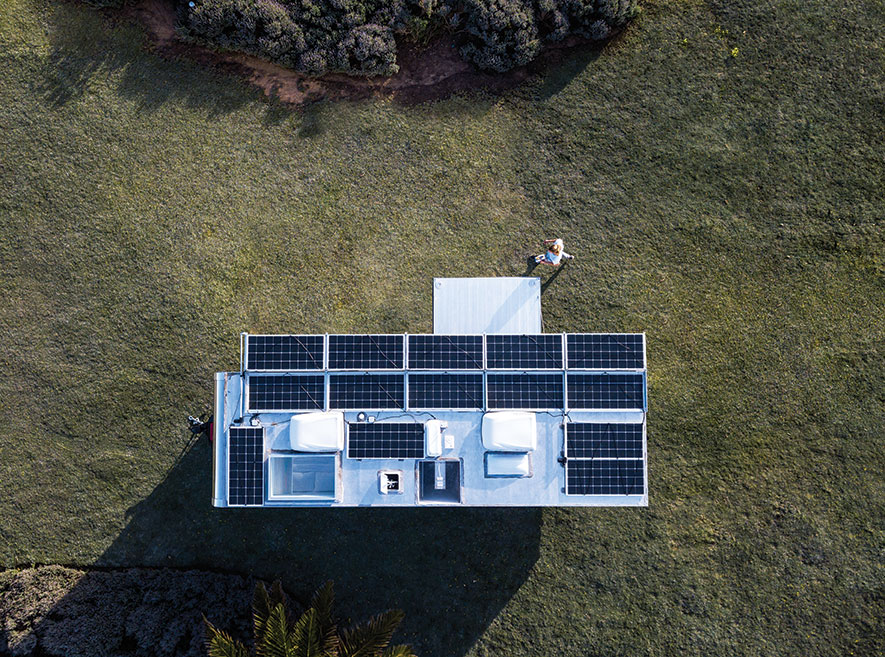 The ultimate goal of the dream-big design: To put themselves and others off the grid forever in a modern moving living space that doesn’t require any energy and doesn’t produce any waste—a net-zero product. Reaching that holy grail may take some time, but the high aim doesn’t faze Matthew. 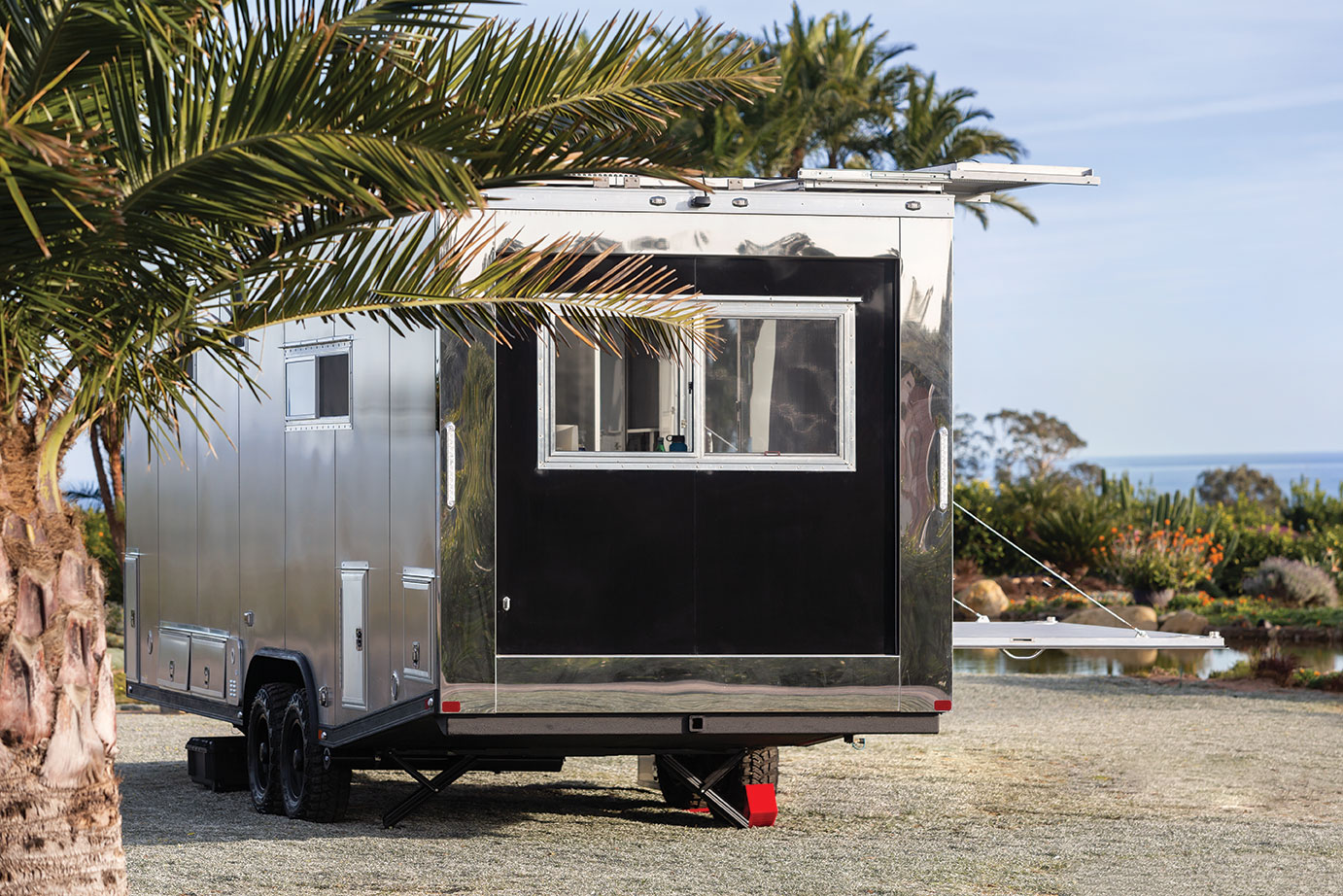 Double-paned windows and insulation make this unit four-season happy, keeping the couple cool in summer and warm in winter.

“I have been involved in this industry for the last 10 years,” he says. “I started as an architect, working for a firm in Santa Barbara. Then in 2010, I started my own company, Hofmann Architecture, designing interiors for mobile spaces. The firm, which still exists, has designed 400 projects for customers and each product was unique. Two years ago, Joanna and I started Living Vehicle.” 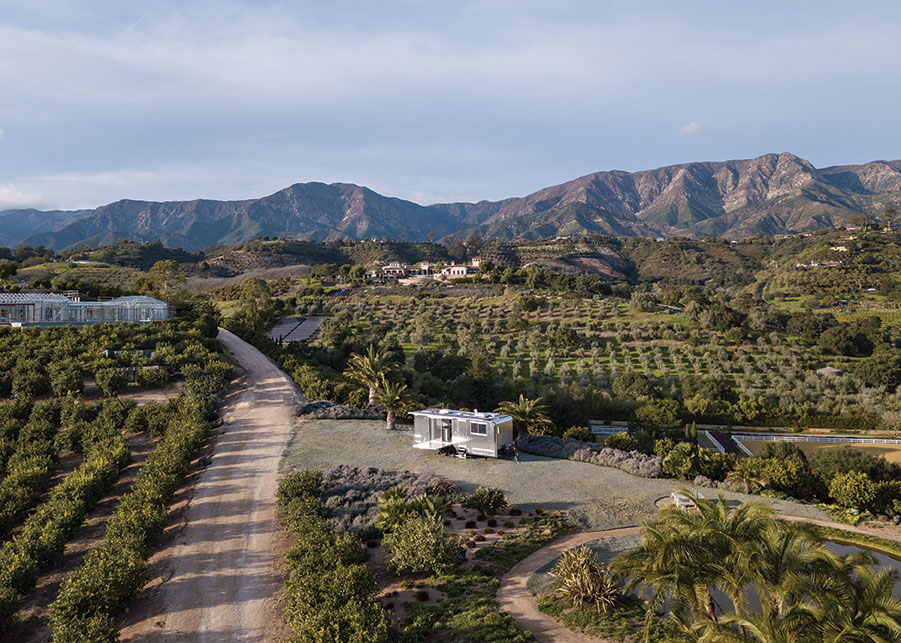 Joanna and Matthew find an inviting spot to nestle between the mountains and the sea in Santa Barbara.

No strangers to living in close, cramped quarters—Joanna jokes that it was a requirement she live with Matthew in small spaces from travel trailers to motorhomes and boats before he would agree to marry her—they knew exactly what the interior design of their Living Vehicle needed to make it a pleasant, easy-to-live-in space that had all the conveniences of home. 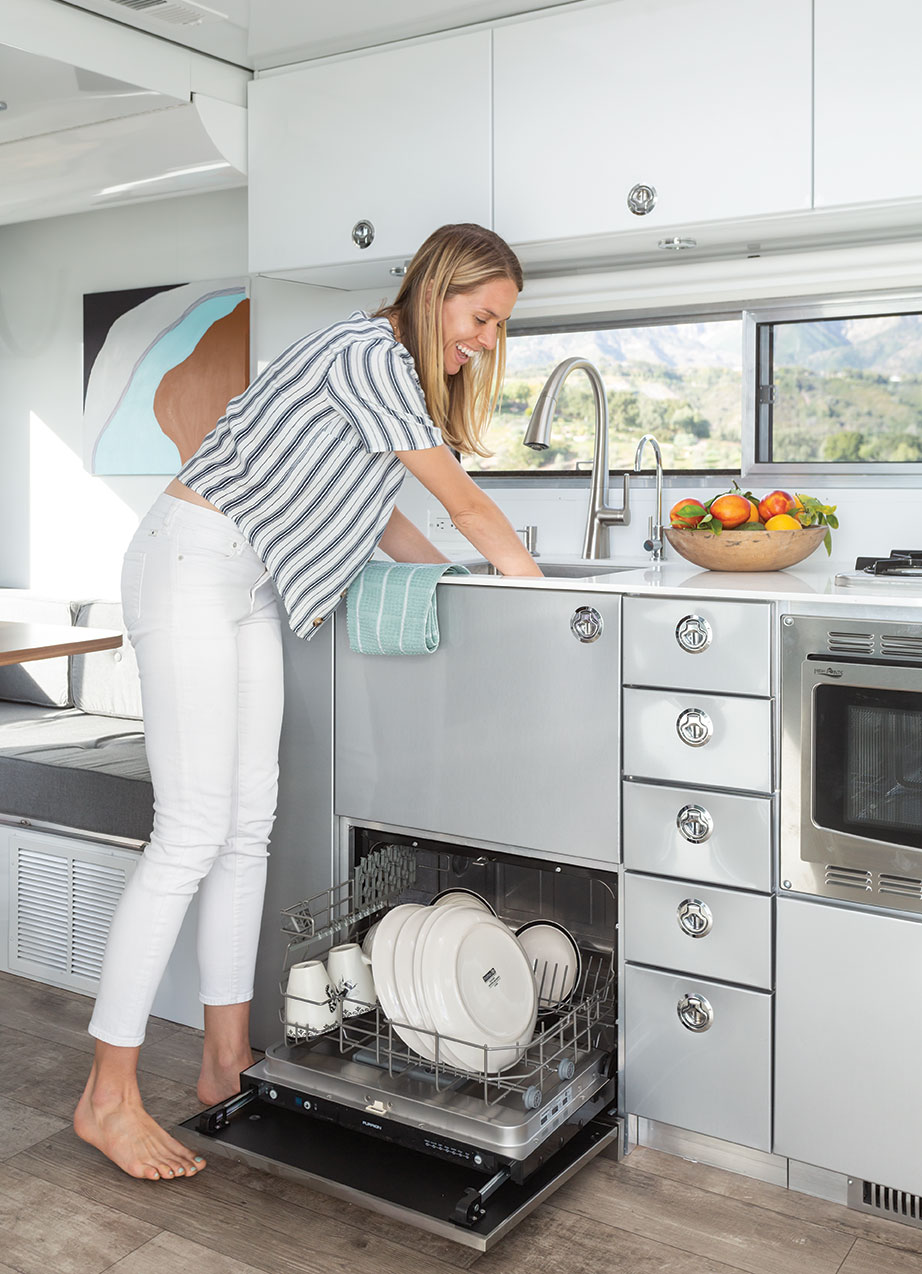 Joanna has all the conveniences of a traditional home including a dishwasher and a microwave convection oven.

“People have been using mobile spaces to live in and fundamentally they are not meant for that,” Matthew says. “They are meant for recreation. Every design decision we made for the Living Vehicle was based off the core goal to make it as residential and livable as possible.” 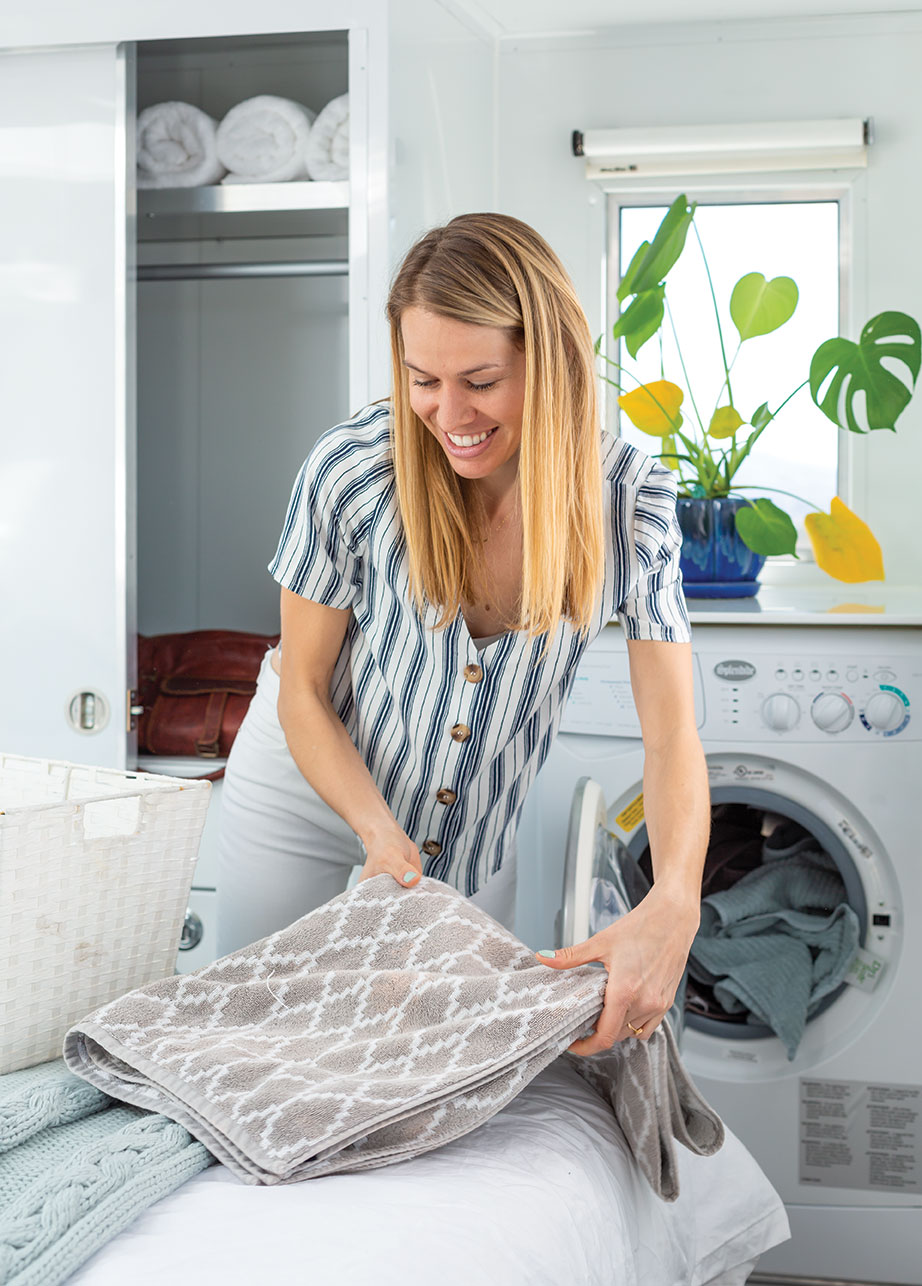 In other words, unlike living in a recreational vehicle, you wouldn’t be smooshed in the shower and suddenly get blasted with cold water because the hot water ran out, you wouldn’t have to take time away from your idyllic country field to search for an impossible-to-find laundromat, and you wouldn’t have to eat something simple out of a can because the kitchen was too small for cooking. Matthew and Joanna used those types of negative experiences to create positive experiences as they designed their perfect dream home without the square footage. 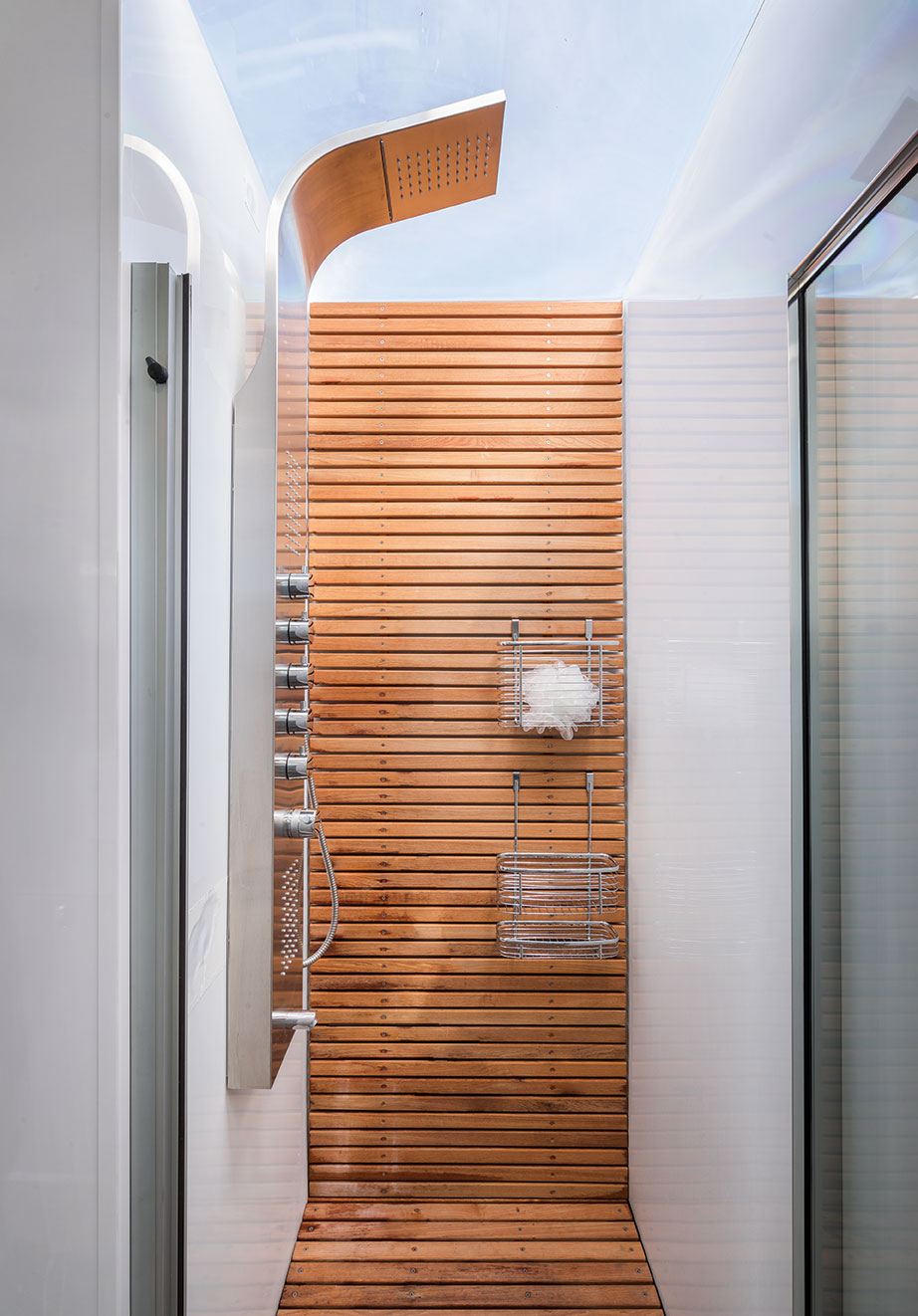 The shower’s wall doubles as a modular mounting system and the panel has multiple water settings—will it be massage or rain this morning?

“My morning shower is a ritual for me,” Joanna says. “A great shower experience starts off my day in a positive way. This Living Vehicle has a walk-in, 7-foot-7-inch-tall shower with teak accents, a skylight, a heated towel warmer, and a wonderful rain-shower effect. It feels like a spa, a blissful space. We’ve created those kinds of spaces throughout the unit.” 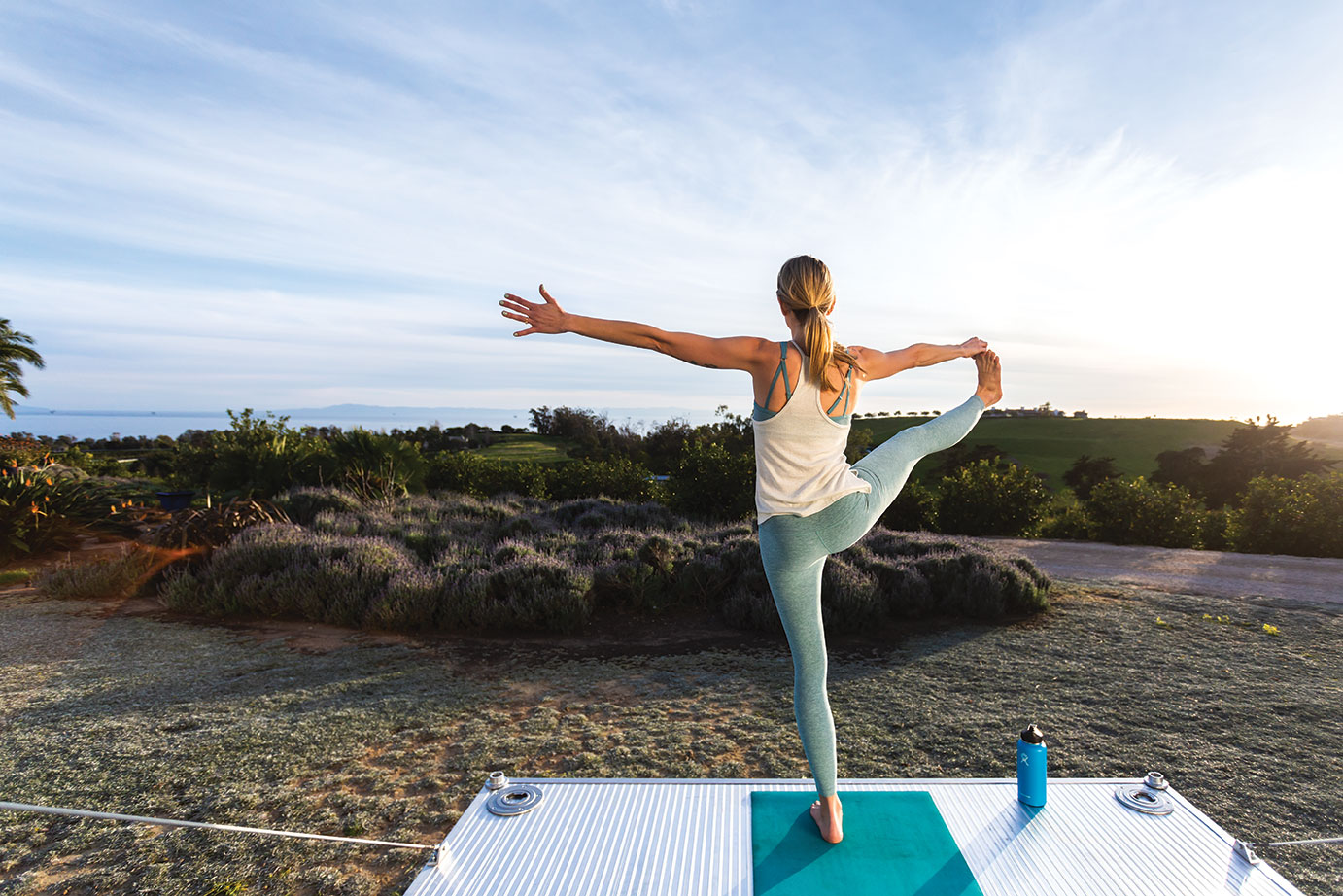 When shower time becomes yoga time, the aluminum siding folds down to create an outdoor deck, for which there is a barbecue with a propane tank, an outdoor shower for those sandy days at the beach and a safety gate in case the couple is out in the wilderness and little Luca wants to come out to play. 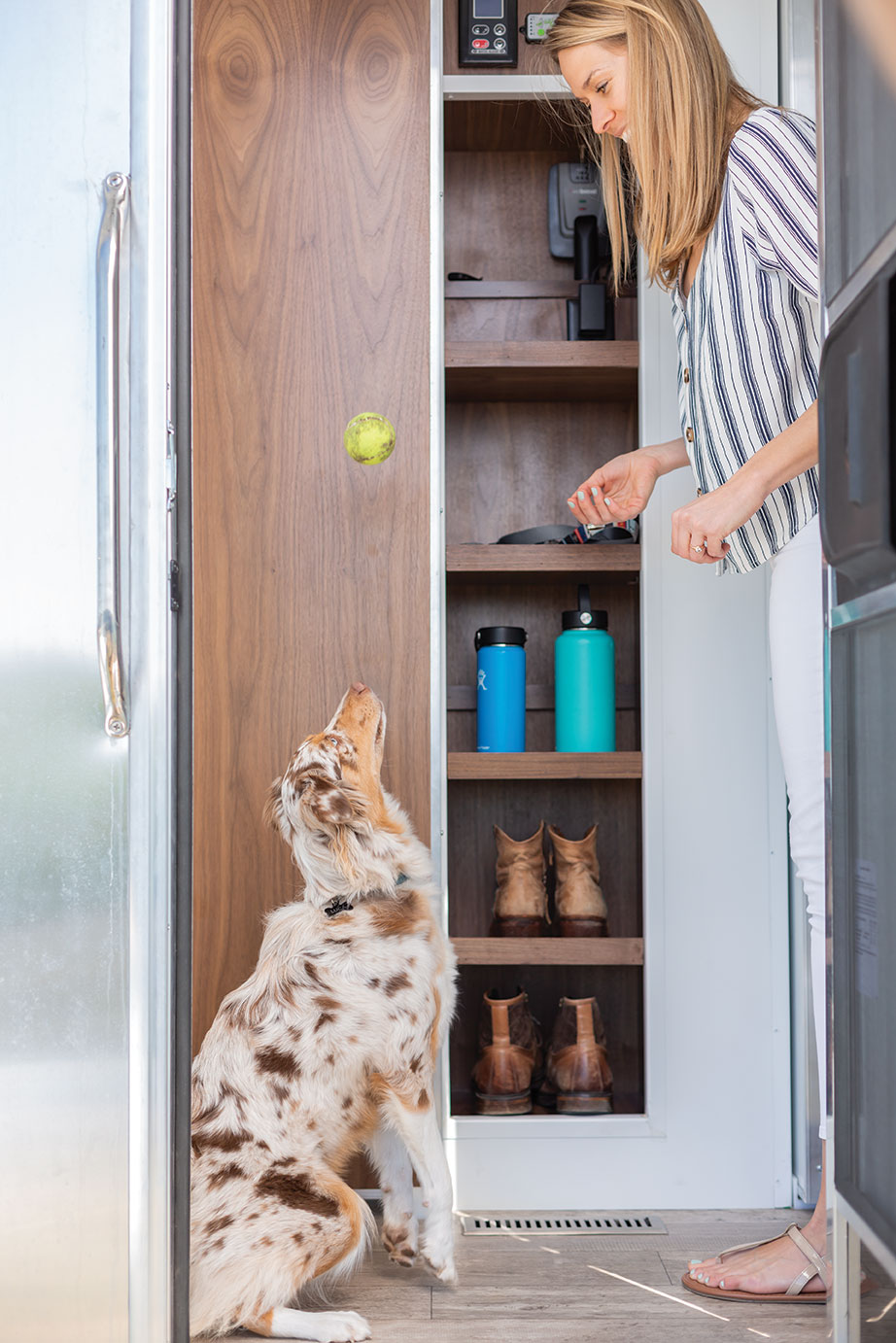 Luca, the couple’s miniature Australian shepherd, has got her eye on the ball, even though there may be food in the big refrigerator-freezer unit behind her or the promise of a walk. She knows the utility cabinet houses her leash and mom’s hiking boots.

For convenience, there’s a washer/dryer combo in the “master” bedroom just beyond the fold-up, queen-size bed; an internal vacuum system in the hallway; a concealed-in-the-ceiling, push-button motorized bed above the lounge area that stops halfway above the lounge for double-duty service (“so if Matt wants to work and I want to take a nap or watch a movie on the HDTV in the lounge, it’s easy to use the space”); and a dishwasher in the kitchen. Joanna, previously a private chef, knows what a functional kitchen requires: a moveable island (that you can take out on deck as needed), an oven-microwave-grill unit, a pull-out pantry and plenty of storage. 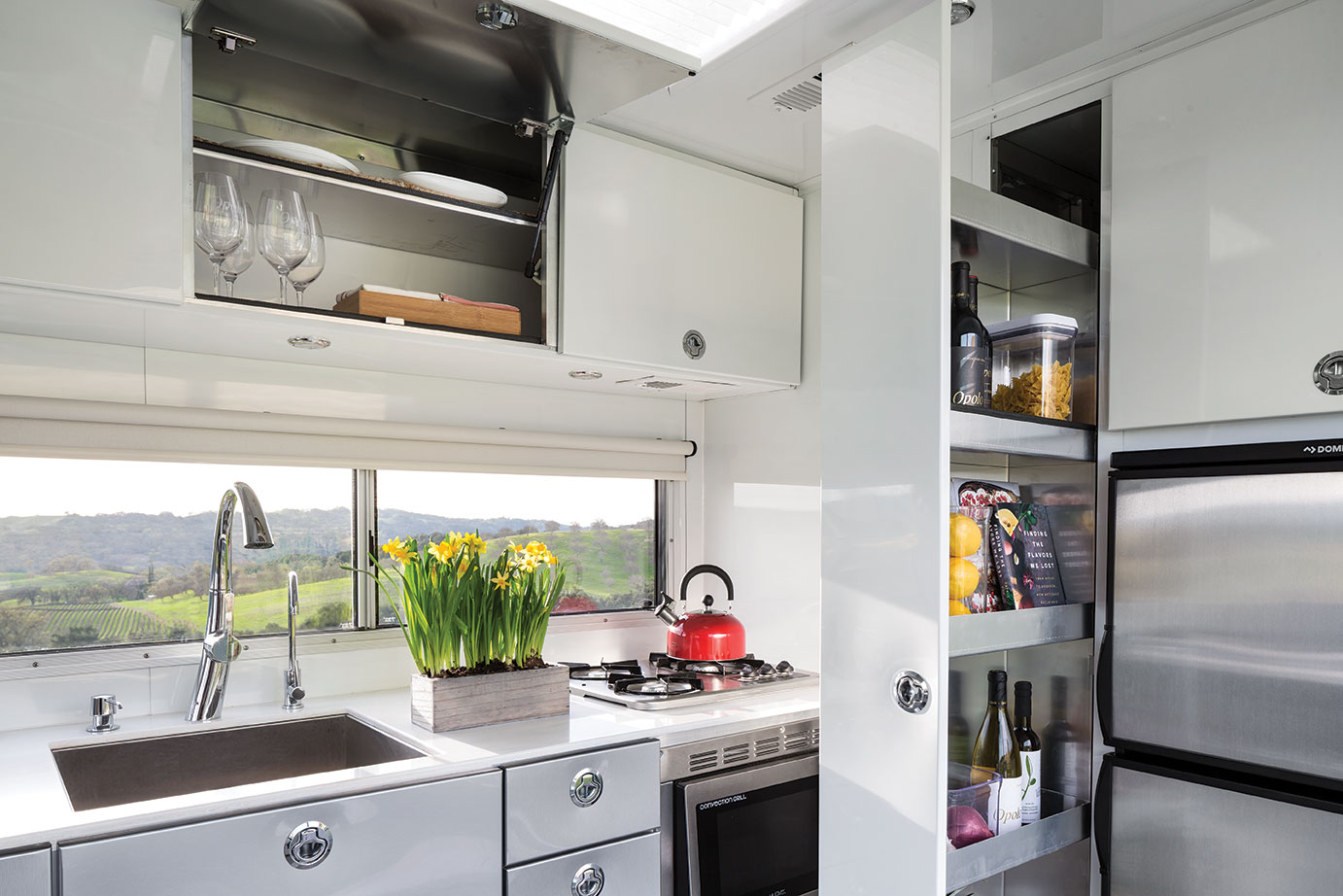 “We live an active life and life comes with things,” Matthew says. “There’s room under the bed for a surfboard, there are big racks for a kayak and our bikes. There is storage capacity for all those things and more. This is designed as a full-time residence. You don’t have to thin down to a suitcase.” 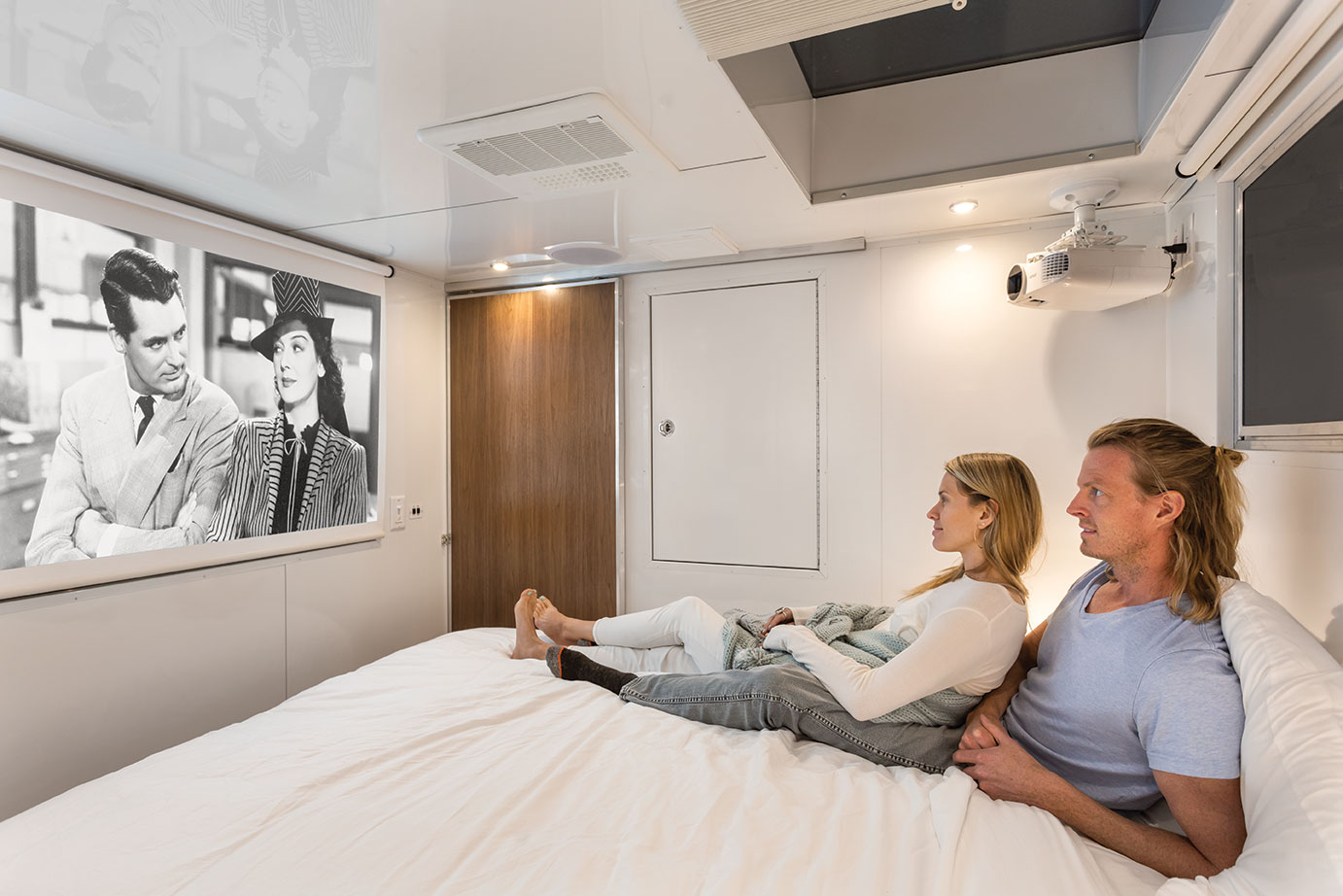 Whether the couple is visiting family in Sacramento, going skiing in Mammoth or taking a vacay in Vegas, high insulation and climate controls keep them comfortable in 100-degree or 30-degree temperatures. And with oversized water and propane tanks and solar-charged lithium-ion batteries the two of them can live off the grid for up to a month. 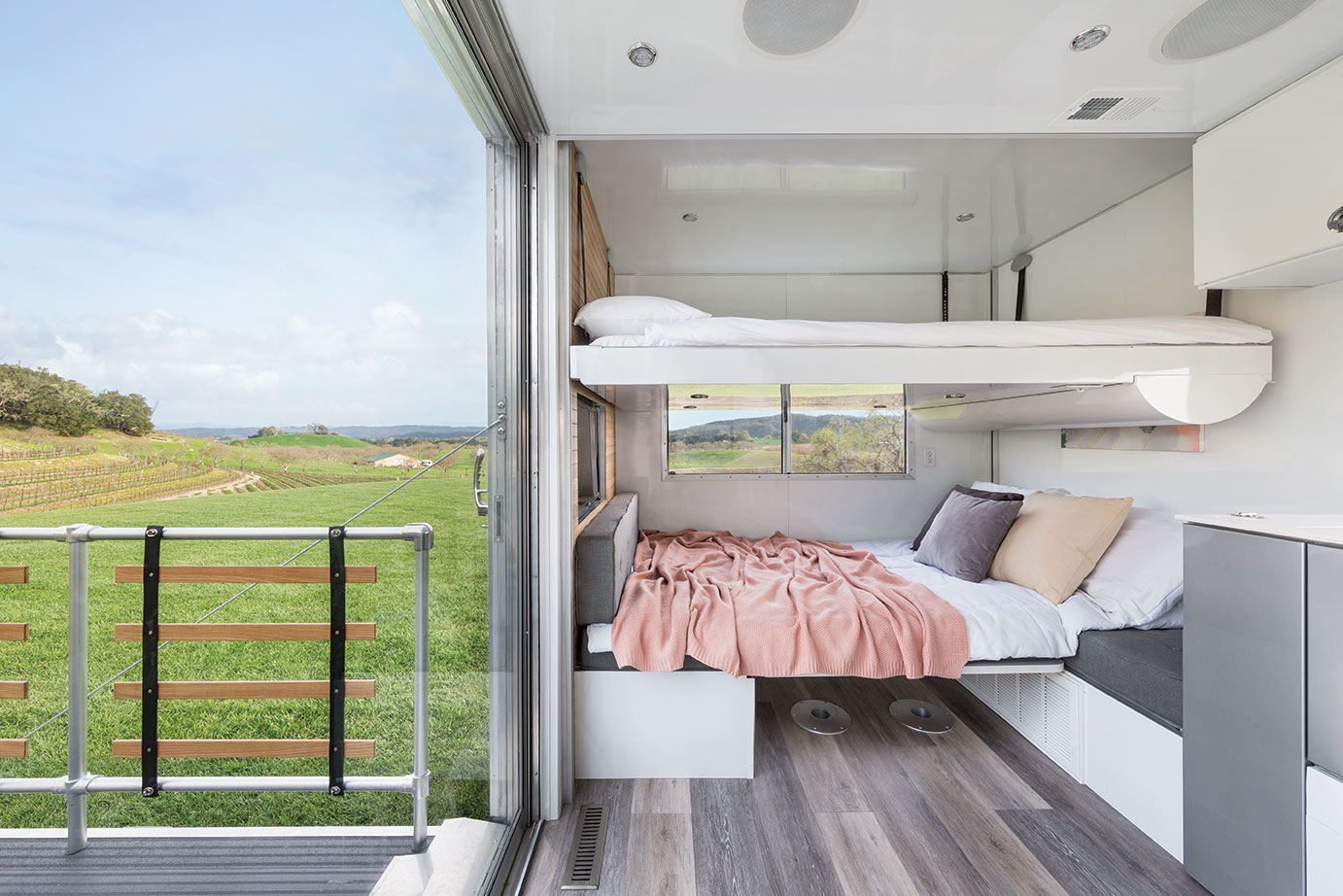 Matthew and Joanna continuously innovate the Living Vehicle’s design. The revamped Version 3 more than doubled the solar capacity of Version 2, taking it from 600 watts to 1,400 watts. In an “industry first,” Matthew says, this one harnessed sun power to supply air conditioning. Version 3 has since sold out. (Once a version sells out, they move on to develop an upgraded Living Vehicle and the earlier version is no longer available on the market through them). 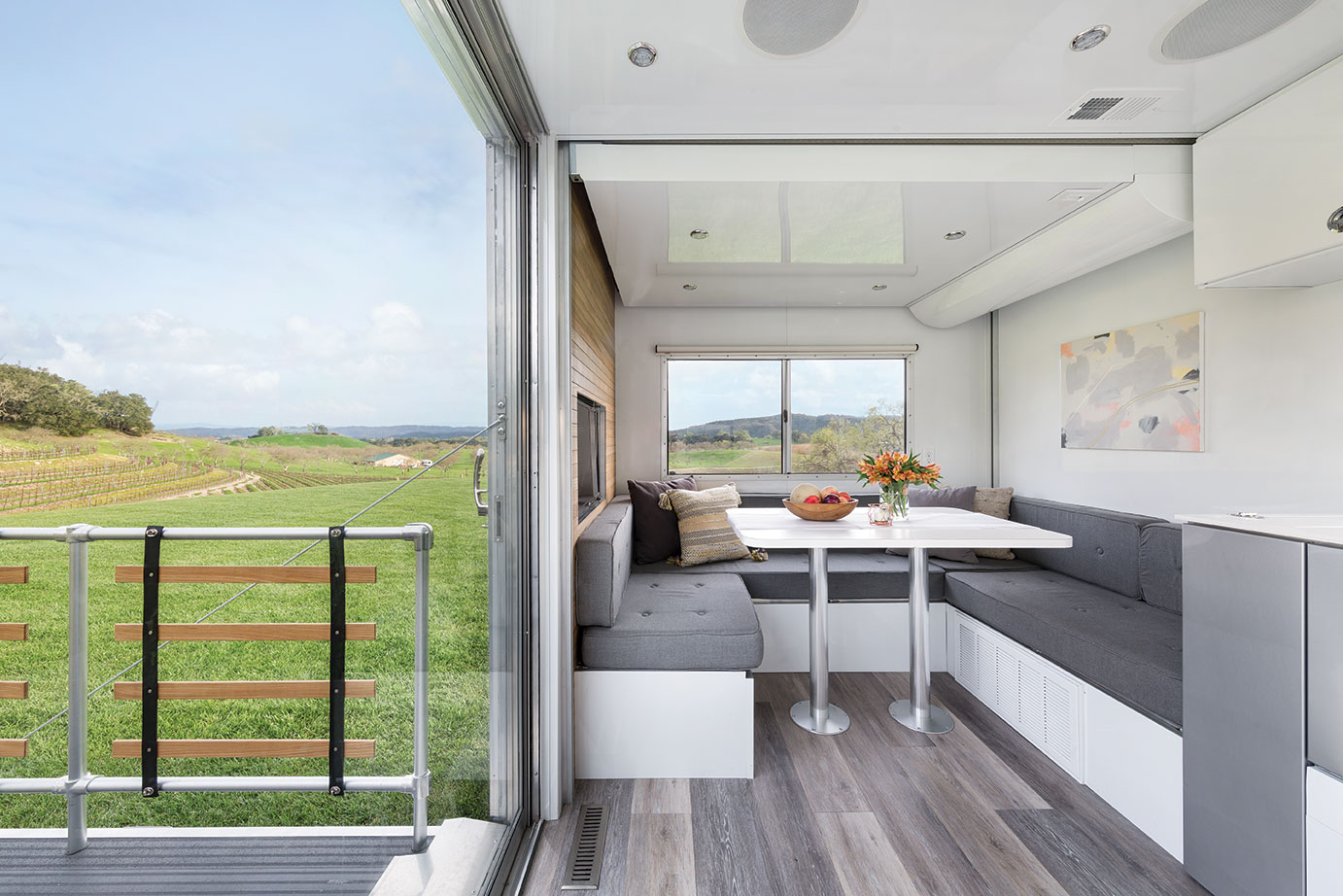 In the future, they hope to have a version (maybe Version 4, which they are working on now) that will not only recycle water but generate water from air. It will create more energy than it consumes—not only powering itself but powering the vehicle (sometimes a Ford F-250; sometimes a Ram 2500) they use to haul it. Eventually, there will be a design that will mean living off the grid full time without ever needing another resupply trip.

“We are witnessing a change,” Matthew says. “There is a new American dream, one where folks are not focused on buying a big house, getting a job, having two kids and a dog. Now they are working less, living more respectfully and living a lifestyle that enables the freedom of choice. 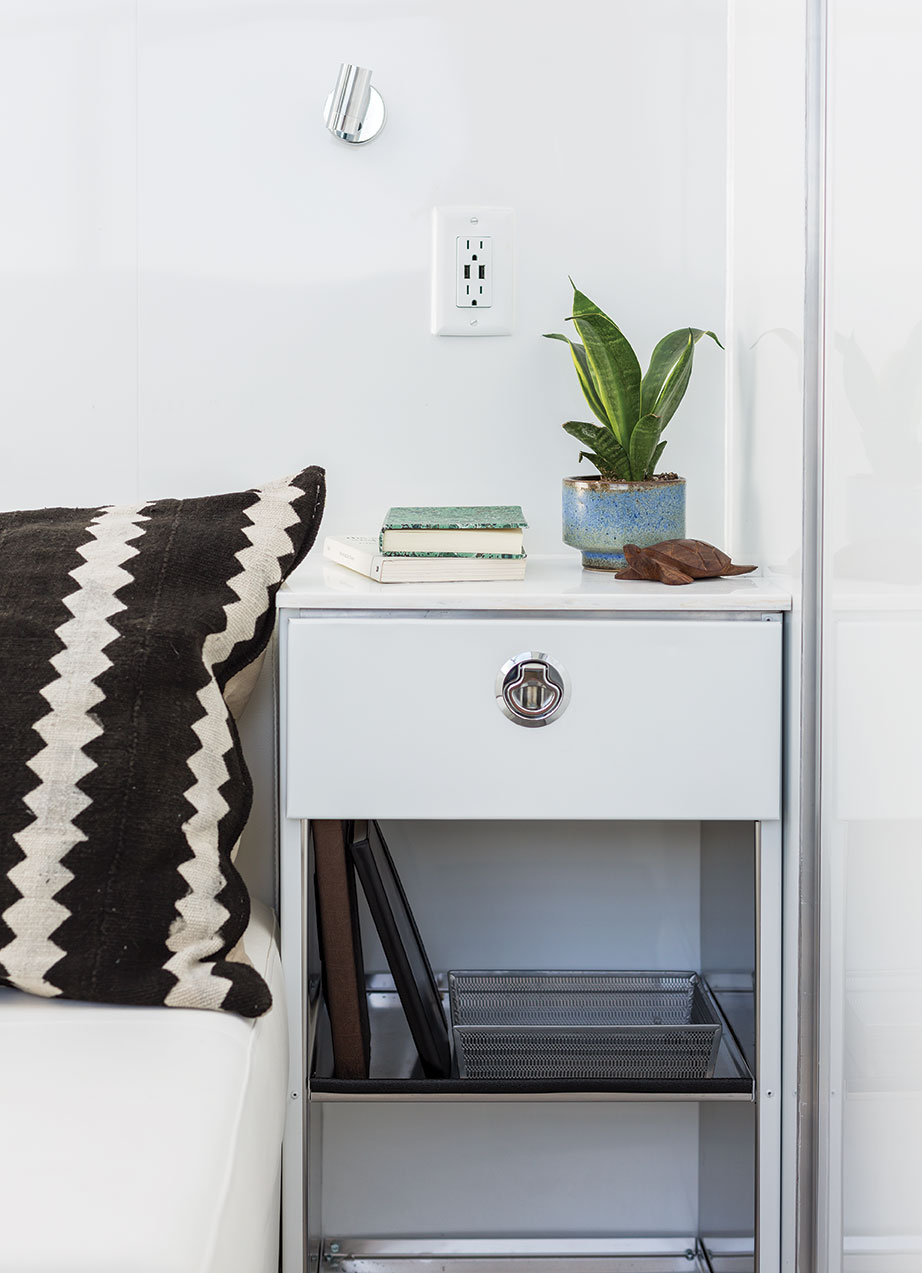 “With the Living Vehicle, we don’t need to be in a house that we have to pay so much for,” he continues, speaking personally now. “With the money we save, we can have wonderful experiences and spend more time with the people we love. Plus, we have the flexibility of going somewhere beautiful with the comforts of home.” 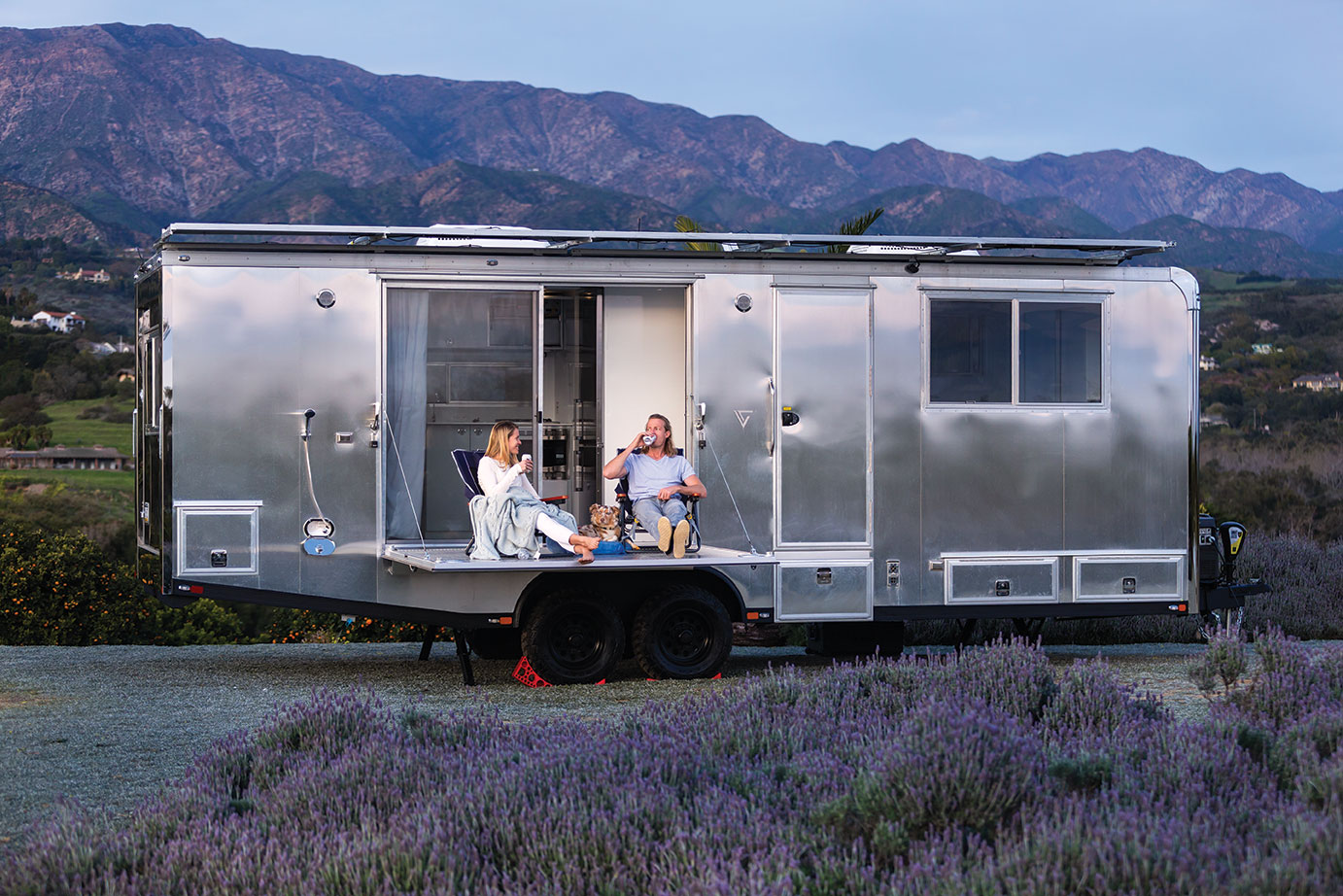 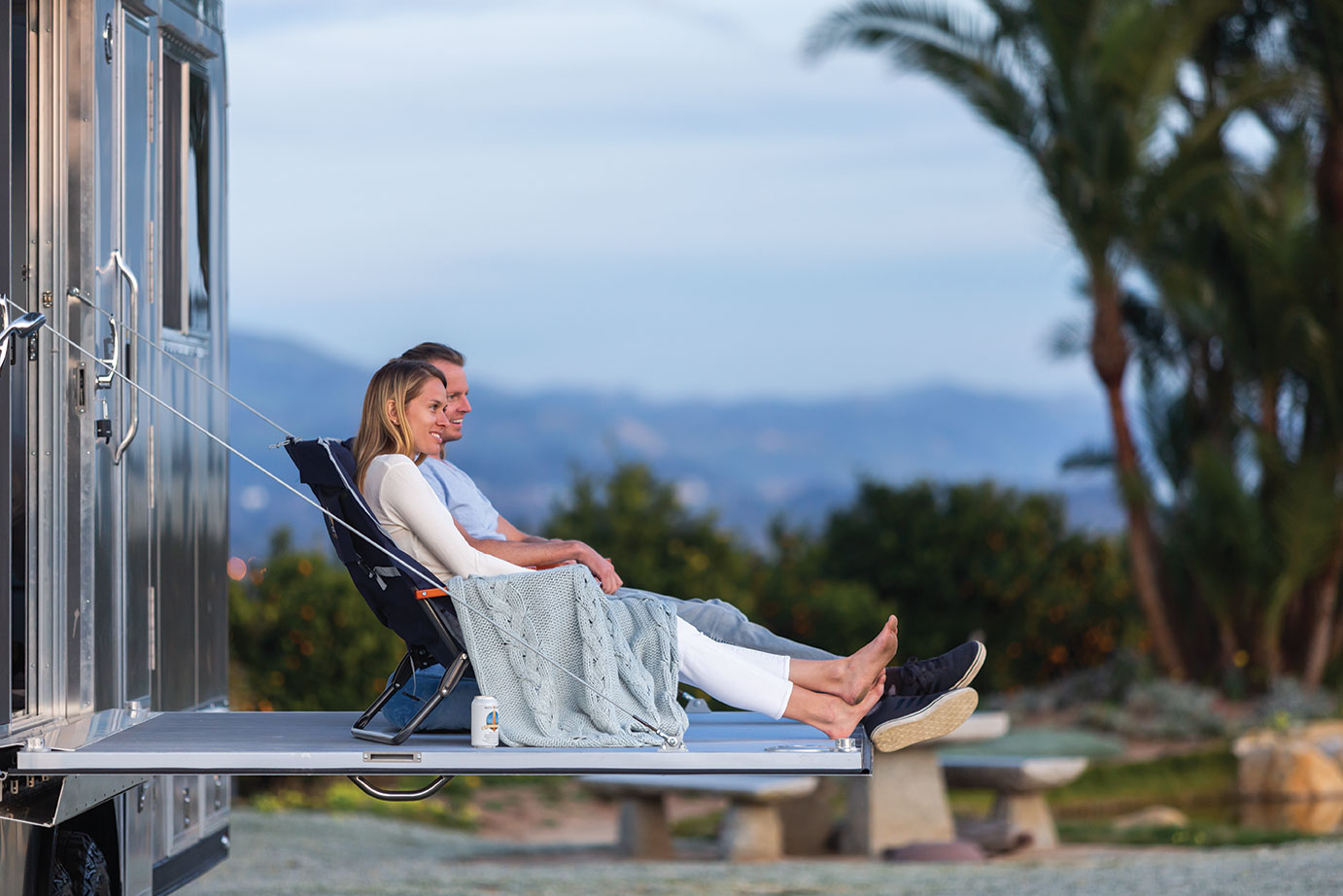 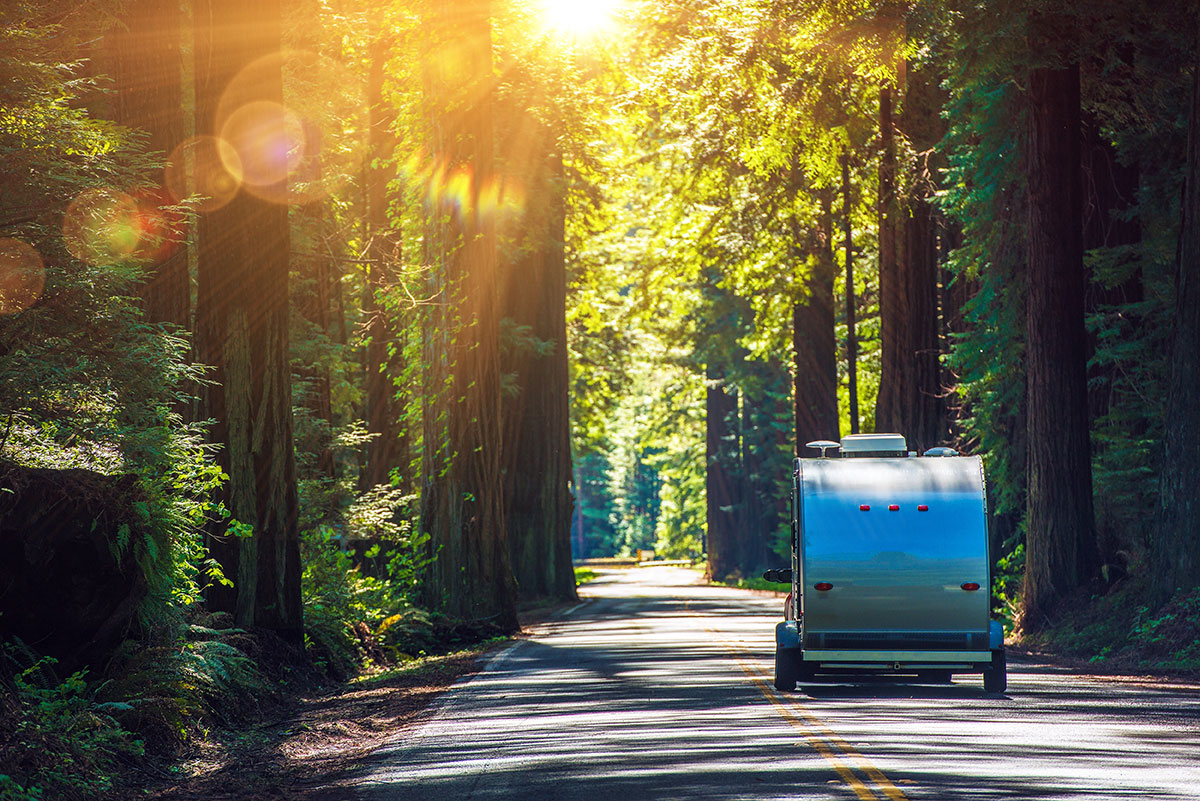 Where to Camp Free in (And Around) San Diego

Know the public access laws and find your spot in the wilderness with our handy guide.