The Most Stylish Campers (And You Can Rent Them) 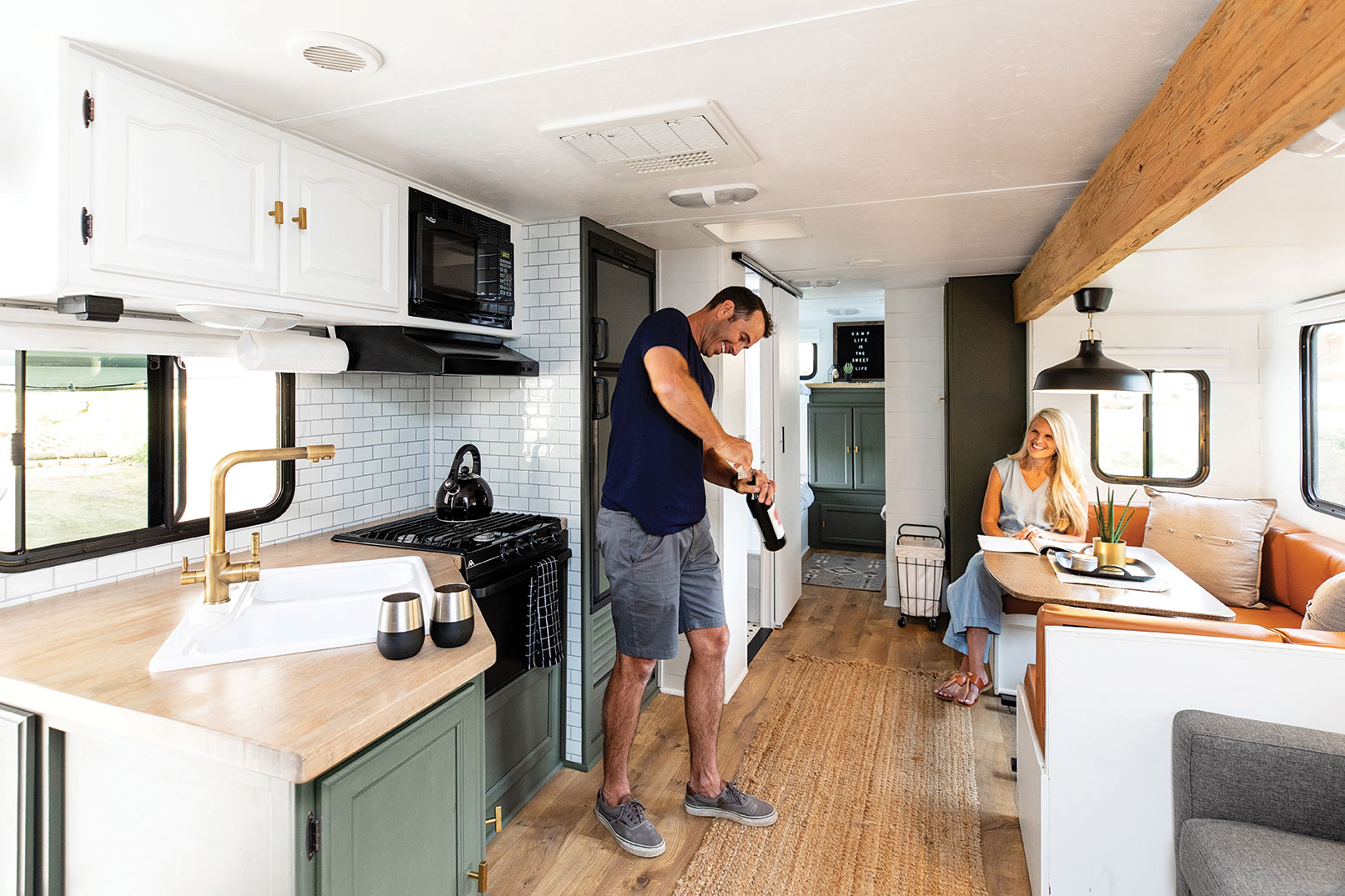 Sean Walker still gets giddy when his phone pings, notifying him of an Airstream or camper trailer that’s come up for sale in his price range. But he’s not actually looking right now. He and his wife Brianne already own four—two trailers that they’ve renovated (and we photographed), one trailer they just bought and a vintage Airstream they also plan to redo. For most, it might seem extreme, but the Walkers camp a lot and have recently started renting their campers for others to use, sort of a mobile Airbnb concept. But this wasn’t part of the original plan when they decided to buy their first. 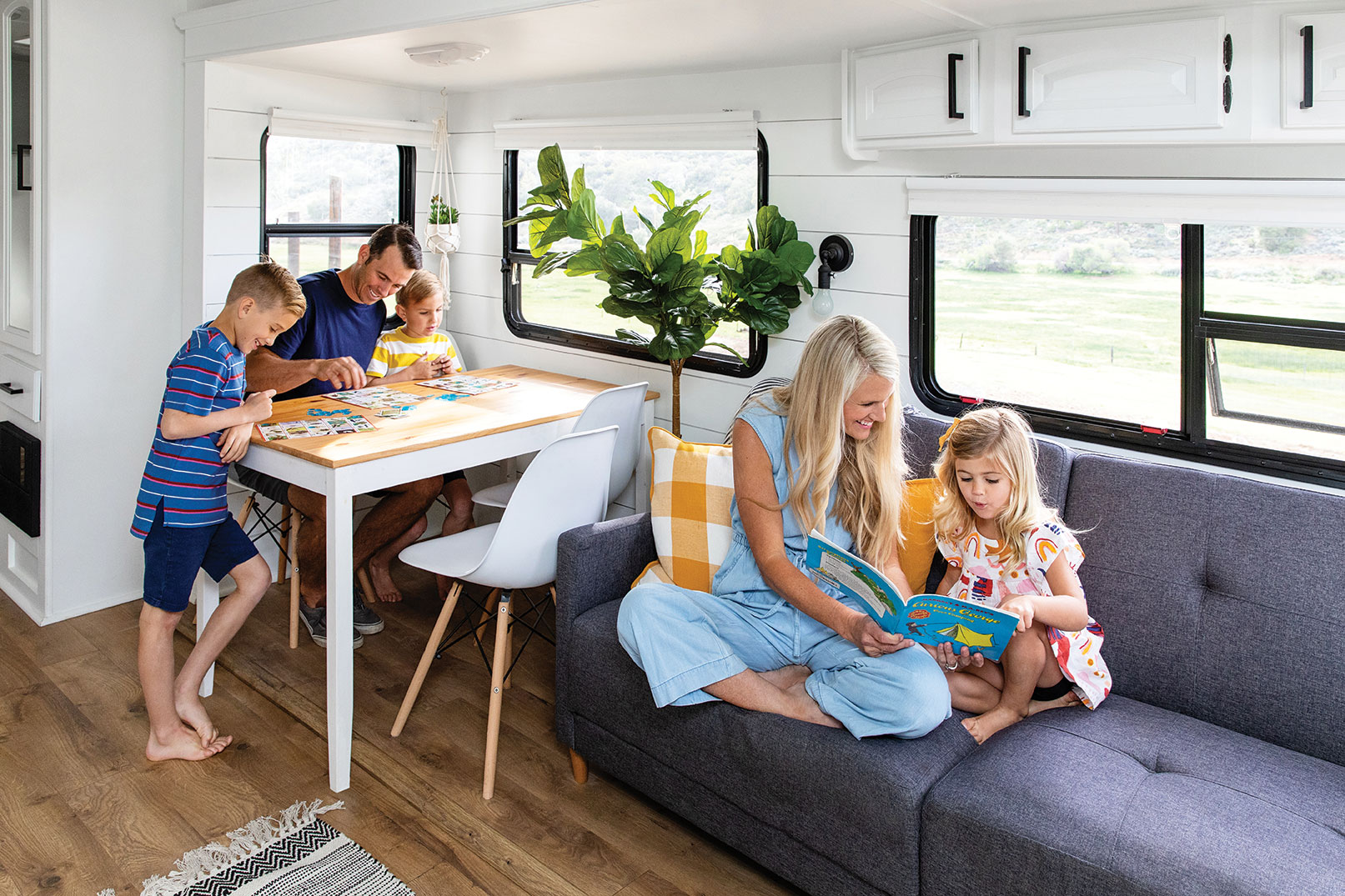 When they aren’t out roasting marshmallows—or exploring—the Walkers hang in the trailer. Left to right: Reid, Sean and Weston play Bingo wile Brianne and Layne read.

A native of San Diego, Sean grew up camping—in tents and toy haulers—on the city’s beaches and in the desert landscapes, which he credits for shaping his adventurous spirit and love of nature. He knew it was something he wanted to continue when he and Brianne started their family, which now includes 8-year-old Reid, 6-year-old Weston and 4-year-old Layne. 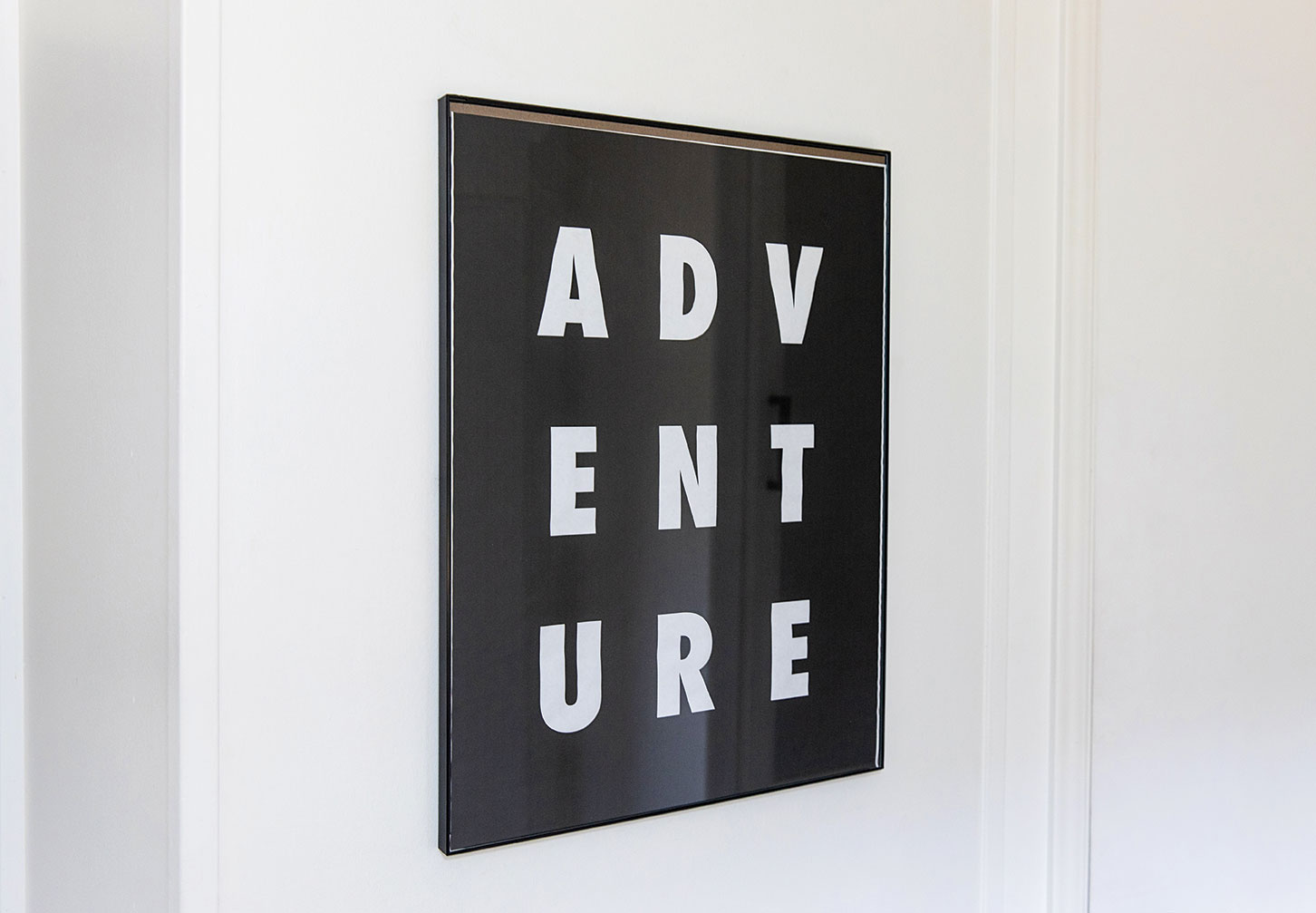 Artwork in the Walker family’s white-painted trailer spells out what’s on the agenda.

“Tent camping, however, proved to be a nightmare with an infant,” Brianne says, recalling one of the early camping trips with kids. “If the baby woke up, so did everyone else.”

The couple knew they wanted to upgrade to a trailer but they didn’t really have the money.

“I signed up for these alerts through all the apps that help you buy and sell, like Letgo, OfferUp, 5Miles and Craigslist,” Sean explains. He entered his specifications—a used 24-foot trailer for less than $10,000—and waited. For months, nothing happened. Then, while the family was vacationing in Palm Springs, Sean got the can’t-pass-this-up alert: a 1999 trailer in great condition for $4,000 in Poway. Sean sent his parents, who live in San Diego, to check it out, and though the blue carpeting throughout was a mess and the walls were a dated parchment yellow color, the seller had saved receipts for everything (including replaced spark plugs), so they knew it was well cared for; the Walkers bought it sight unseen. 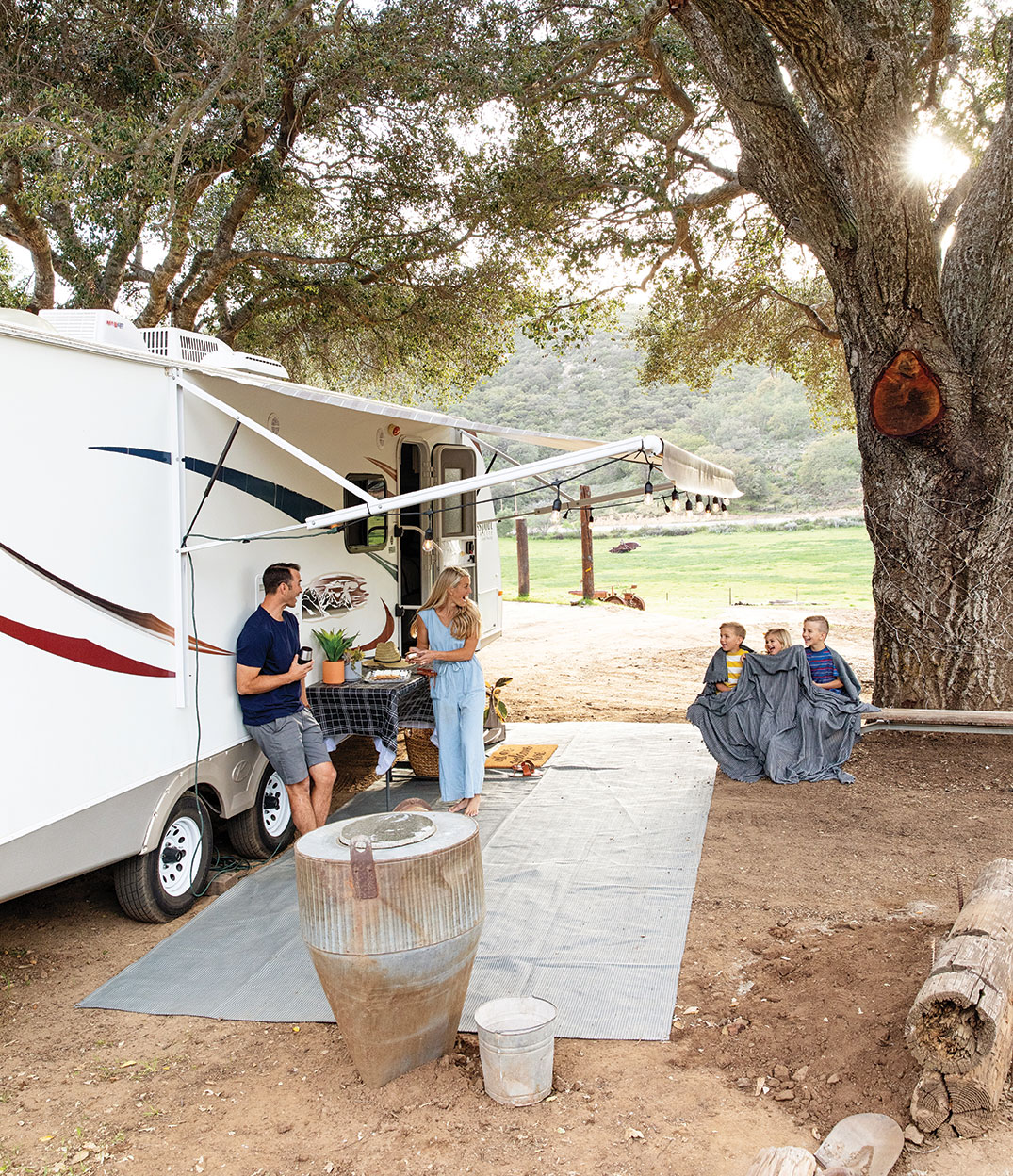 The Walkers have mastered camping with kids, and want to help more families get out into the great outdoors.

The $2,000 in upgrades they put into it were purely cosmetic. They started with a fresh coat of white paint, which they thought would be easy since their home interiors wear the snowy shade. They bathed every wall in the trailer in the same hue, “but it looked kind of yellow in there,” Brianne says. So Sean, who hates painting, repainted all the cabinets and walls in Extra White from Sherwin-Williams, which looks clean and modern. Beyond that, the couple installed a peel-and-stick laminate floor, and swapped out the hardware, lighting and fixtures. 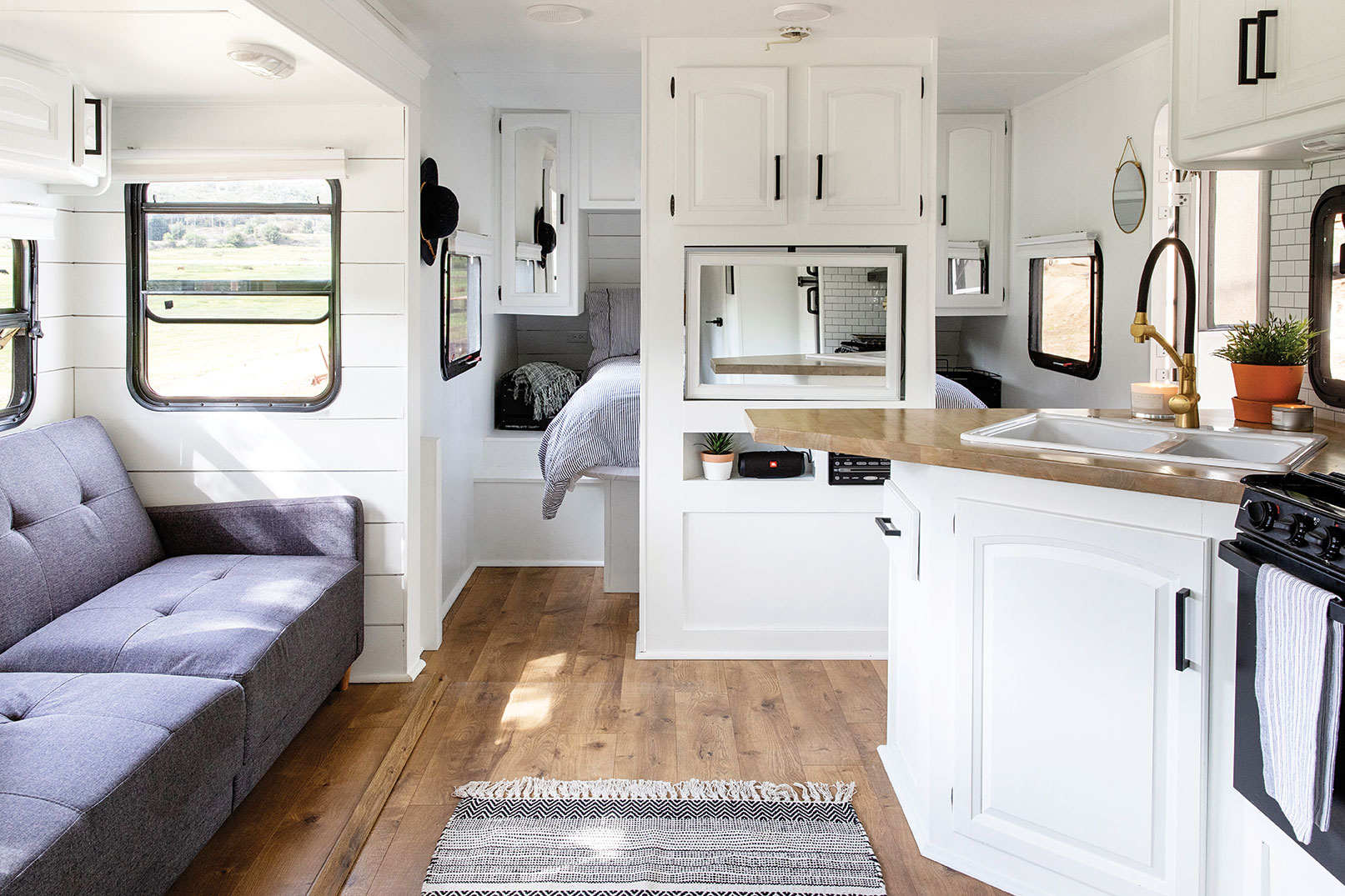 Sean centered the console cabinet that houses a TV on one side and a mirror on the other (and can be swiveled to the bedroom or living space) to make access to the master bedroom easier.

With friends and family often joining the Walker crew on their weekend getaways, the family outgrew the tiny trailer within the first year, so they sold it and quickly upgraded to a bigger model with pop-outs to make the trailer feel instantly larger. With the help of his notification system, Sean set his sights on a 2012, 31-foot trailer in a Riverside RV park. “It was smelly and gross, but I saw the potential,” he says. And he only paid $14,000 for it, but put more money and work into this one. 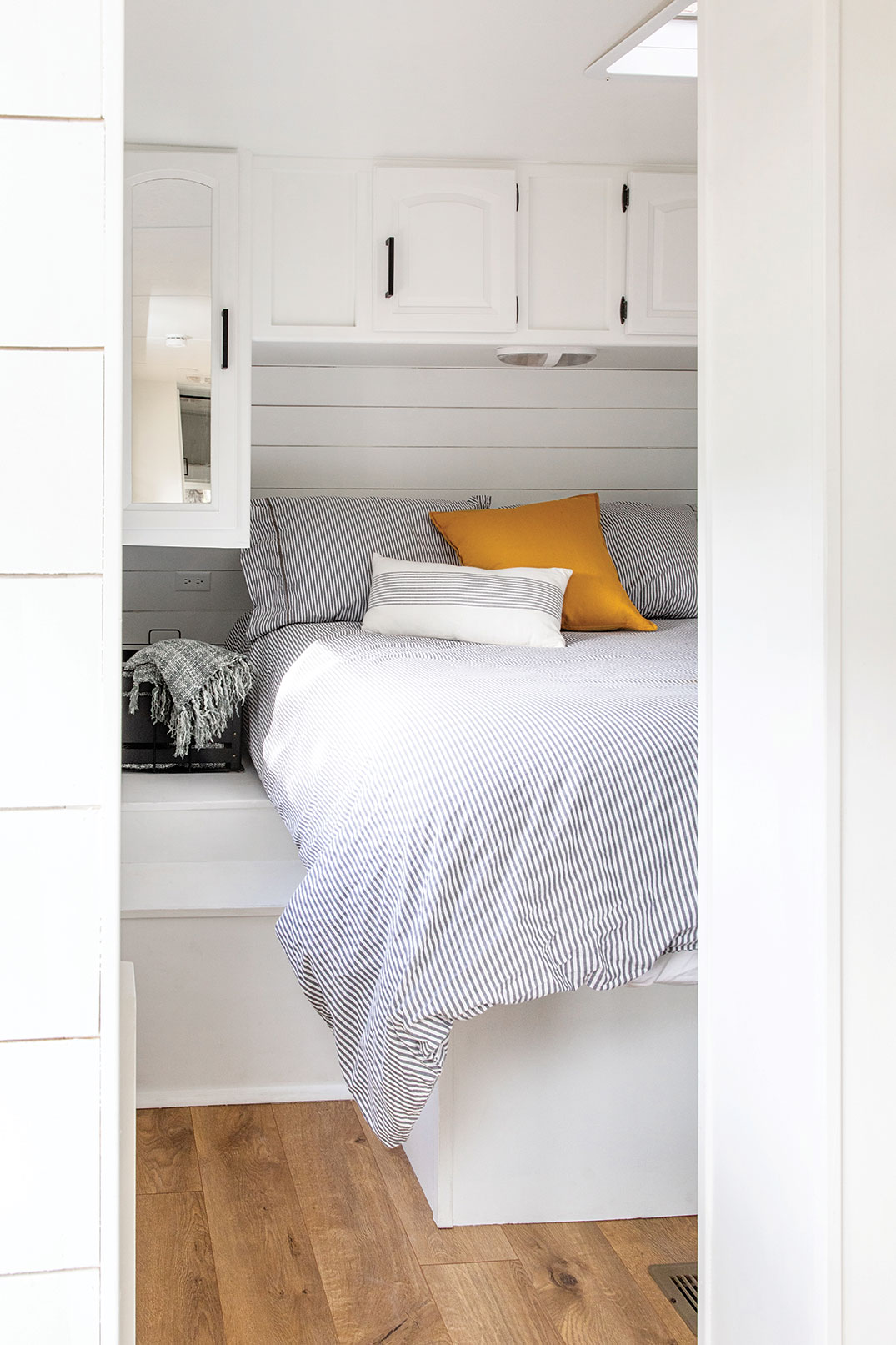 The cabinets above the master bed store weekend attire as well as extra linens and pillows.

They wanted each of the three kids to have their own bed, so Sean constructed an L-shaped bunk over a twin bed with lots of play space underneath. He shortened and centered the wall that sectioned off the master bed so that it still provides privacy but allows for easier access in and out of that space. 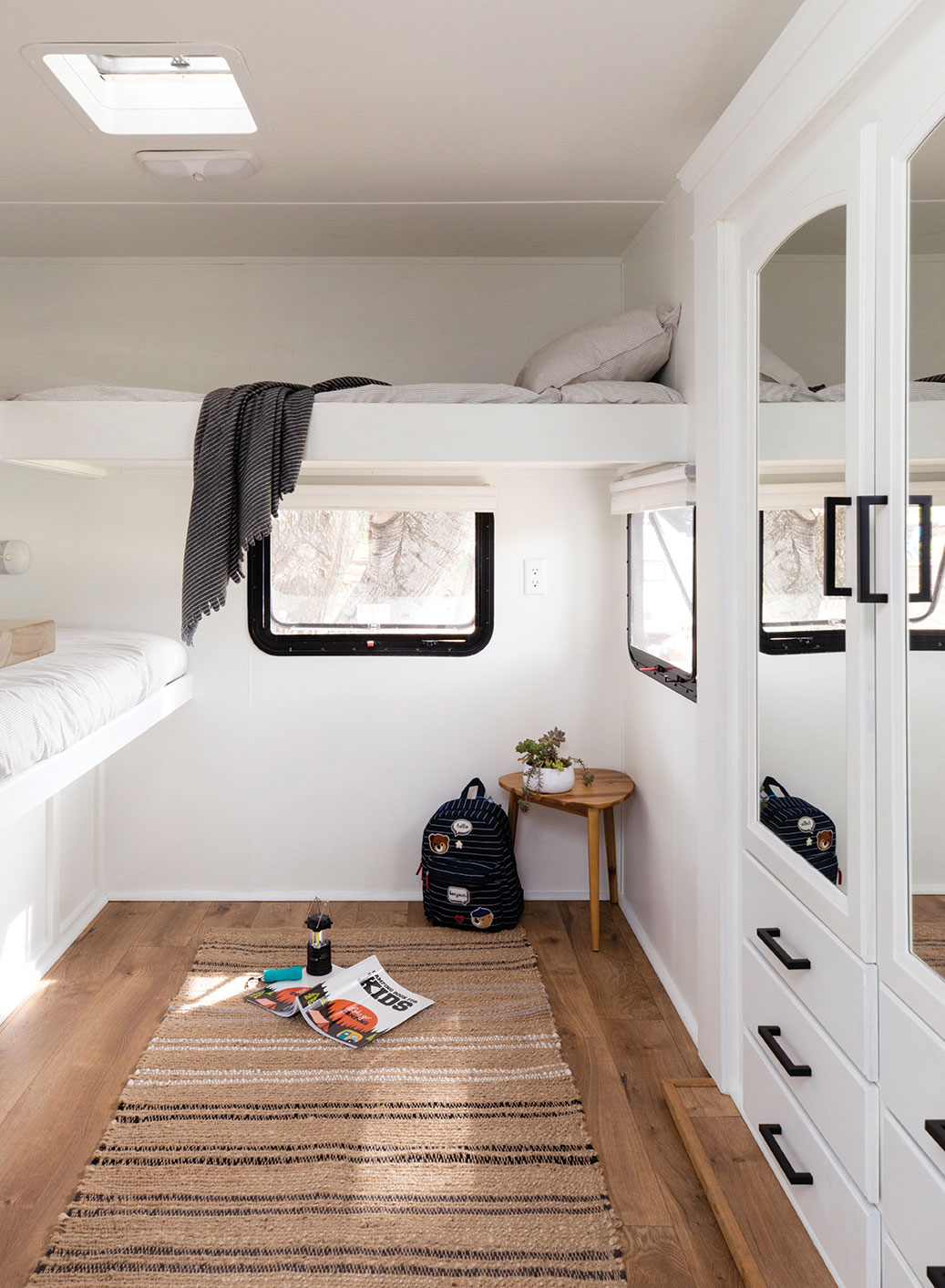 By lofting the third bed, Sean created lots of area for play in the kids’ room. The cabinets hold books, games and clothes.

The Walkers also learned from previous mistakes. Instead of the sticky laminate flooring they put down in their first trailer, which shifted every time the camper moved, they opted for inexpensive click-together laminate planks that resemble oak. They installed faux shiplap in the main living and dining areas. Sean and Brianne shopped for vanities and fixtures intended for residential use and made modifications—converting 120-volt lights to 12-volt, trailer-friendly lighting, for instance—to make it feel more like a designed space than a standard recreational vehicle. “The lightweight items made specifically for RV interiors are mostly cheesy and not great looking,” Sean says. 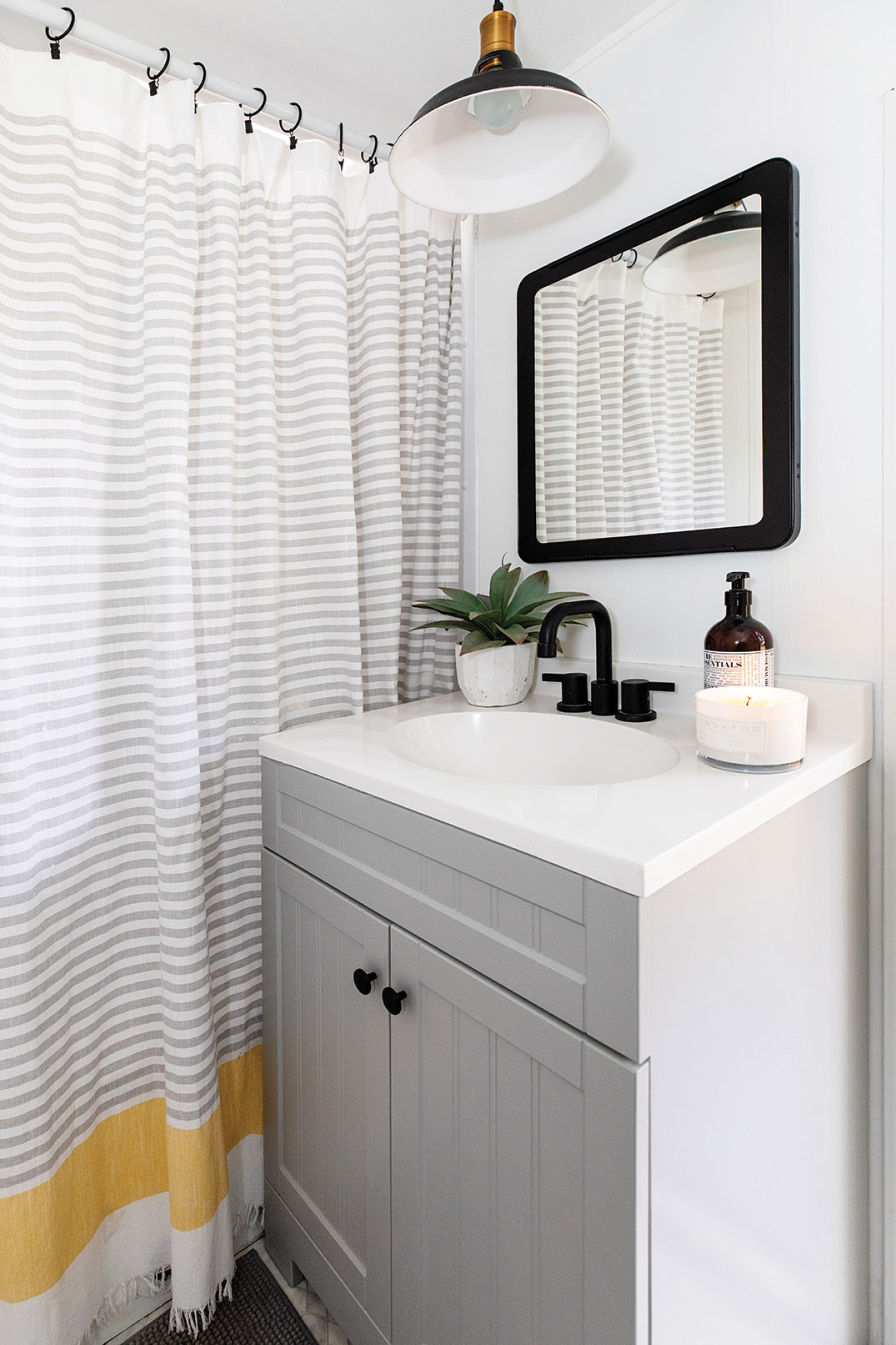 Sean replaced the original vanity and faucet in the white trailer. The light is also intended for residential use and had to be modified for 12-volt use in the camper.

Existing drab shower-and-tub tile posed quite a challenge. Sean and Brianne used peel-and-stick subway-looking white tiles in the kitchen, but worried they wouldn’t adhere on bathroom walls exposed to more moisture. After lots of research, Sean found an appliance epoxy that required sanding and harsh fumes but worked to make the dingy cream tiles sparkle. 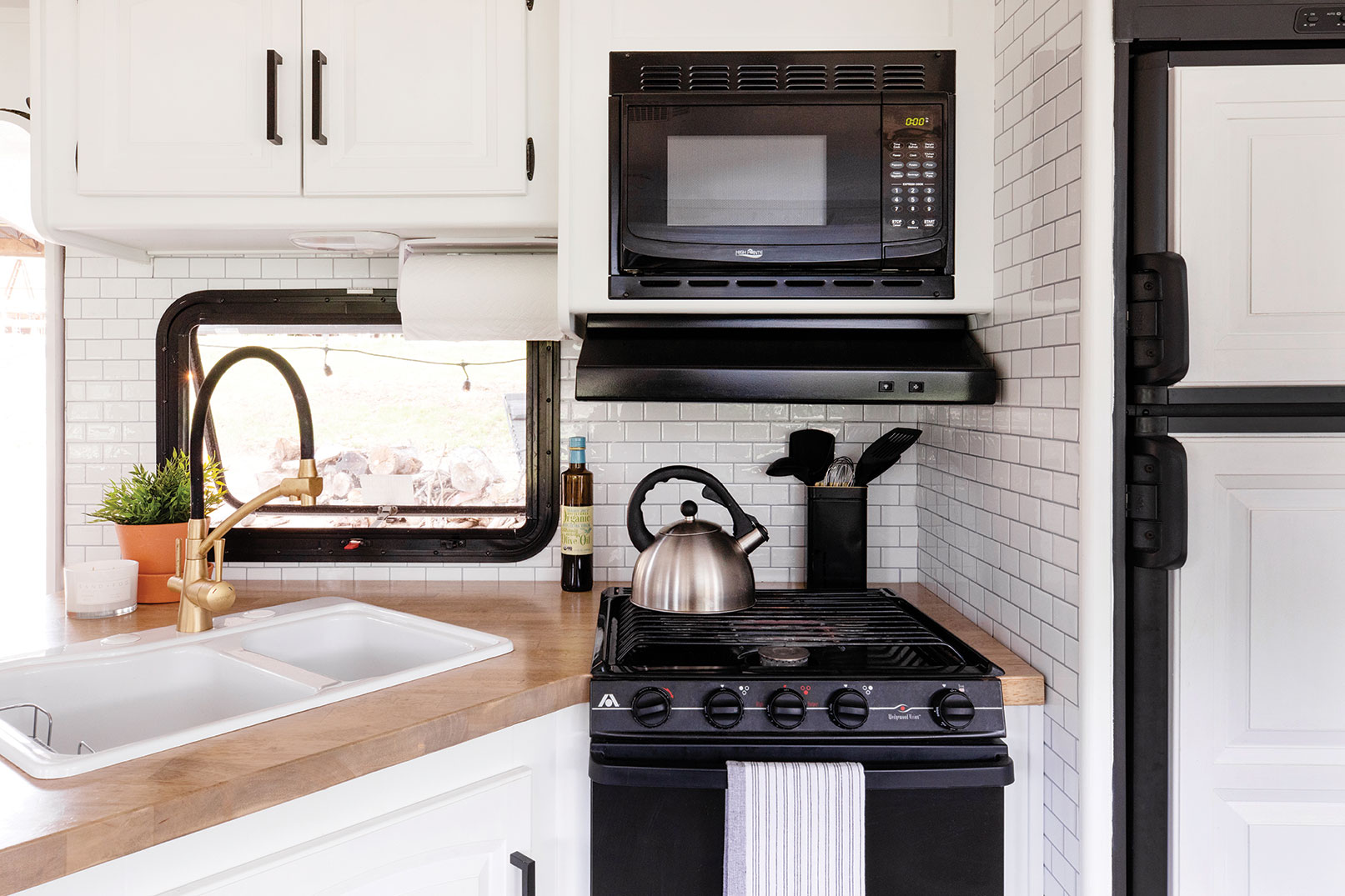 The completed project started getting some attention. “Friends made comments and started asking if we’d consider letting them use it when they camped,” Sean says. Word spread, and friends of friends began asking to rent the camper, and the business sort of organically took shape.

Faux shiplap and greenery make the space feel more like a home and less like a camper.

With the demand so high, however, Sean and Brianne found it difficult to fit their own family camping excursions into a rapidly filling calendar.

So, Sean started looking again and found a 35.5-foot camper for sale in Palm Springs and a 1969 vintage Airstream, a model the couple dreamed of renovating, in Leucadia at almost the same time. “Somehow, I convinced Brianne to let me get both,” says Sean, who made quick work of rehabbing the camper on his days off from his job as a firefighter. In just three weeks, he painted everything (this one got an olive green-and-white scheme), redid the floors using the same click-together planks; distressed and hung a faux beam to give the interior a bit of a rustic look, replaced lights, sinks and other fixtures; had the bench cushions reupholstered in a leather-looking, cognac-colored vinyl; and, in the bathroom, used actual penny tile and grout (typically a no-no in trailer renovations since the trailer’s movement can cause the grout and tile to shift and crack, though theirs is holding up perfectly). 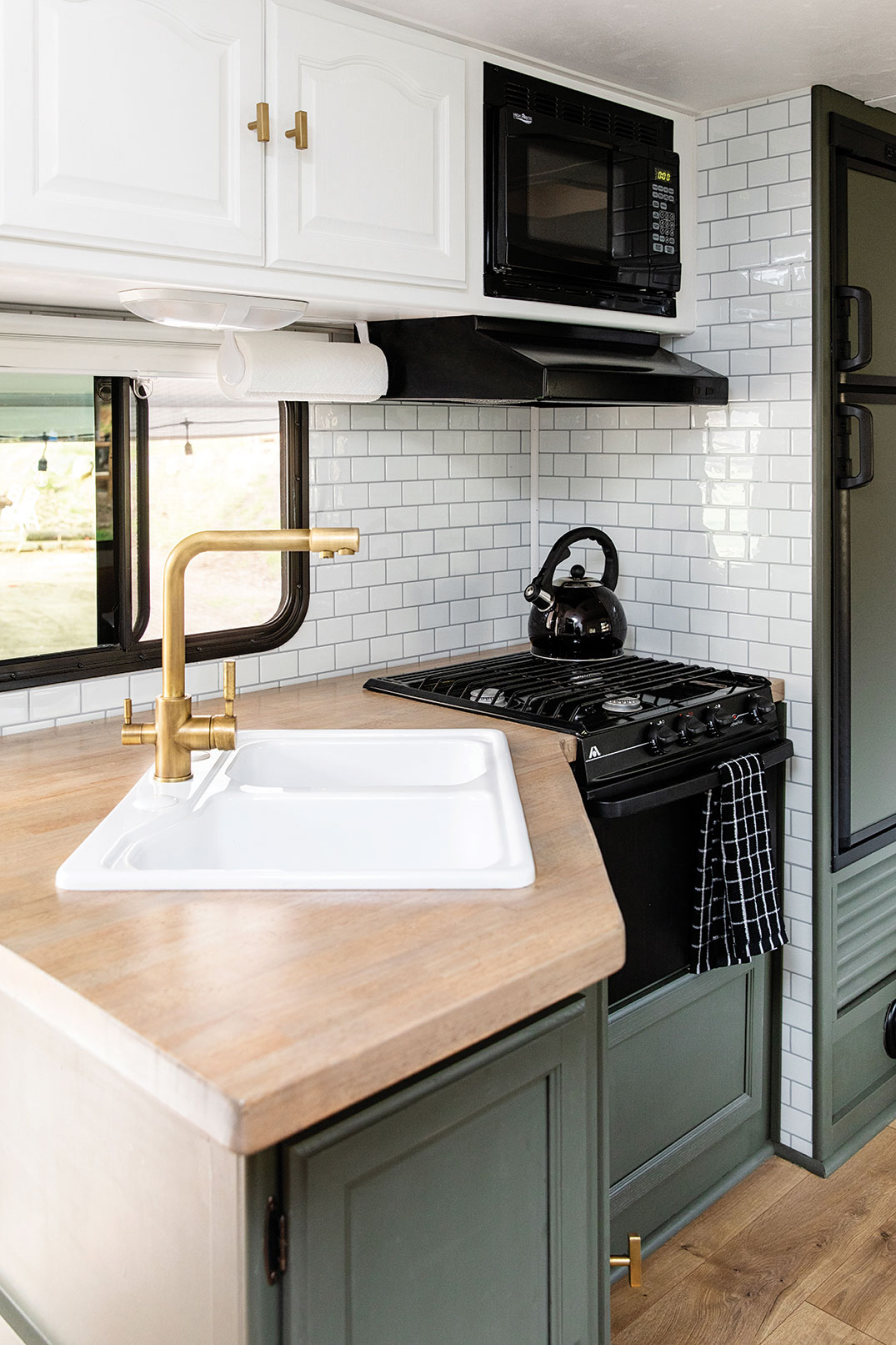 In the green trailer, the gold faucet and hardware add a touch of glam.

The Airstream redo pet project is tabled—for now—while the couple works to renovate their newest camping trailer acquisition. But the Airbnb business is starting to take off, literally. “It’s still 90-percent word of mouth,” but in the eight months since they’ve offered this as a service, the Walkers, via Walker Campers, have hosted 36 rentals. 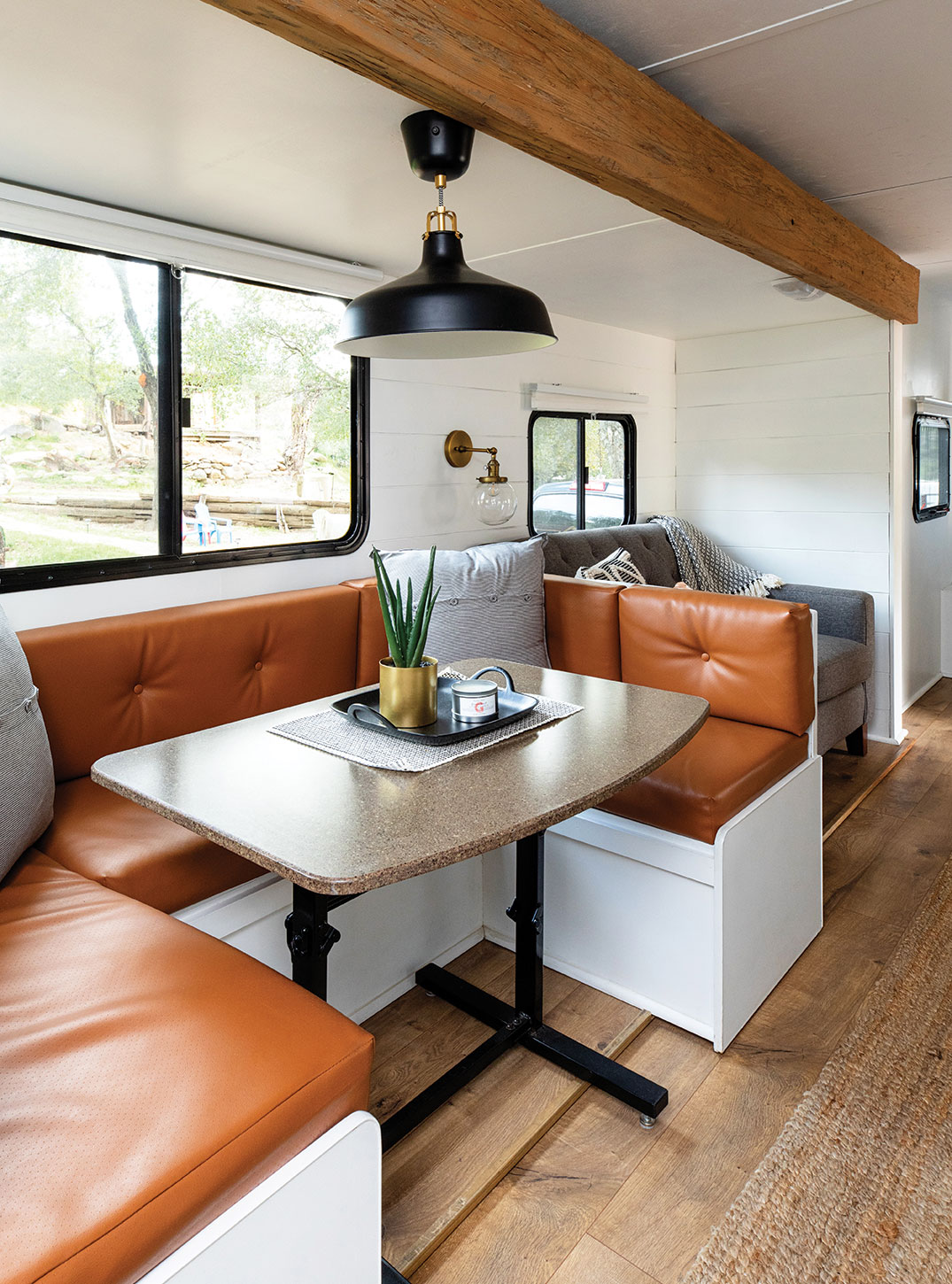 Sean used new wood and tools to distress the beam he made, and durable, easy-to-clean vinyl covers the existing bench in the green trailer.

Here’s how it works: You book the campsite and one (or more) of the Walker’s trailers. Sean drives the trailer and sets up for you (complete with a kid- and/or adult-friendly arrival gift from your hosts). You show up with your clothes and the food you’ll be cooking and consuming for the weekend. Sean comes to pick up the trailer after your weekend of fun comes to an end. 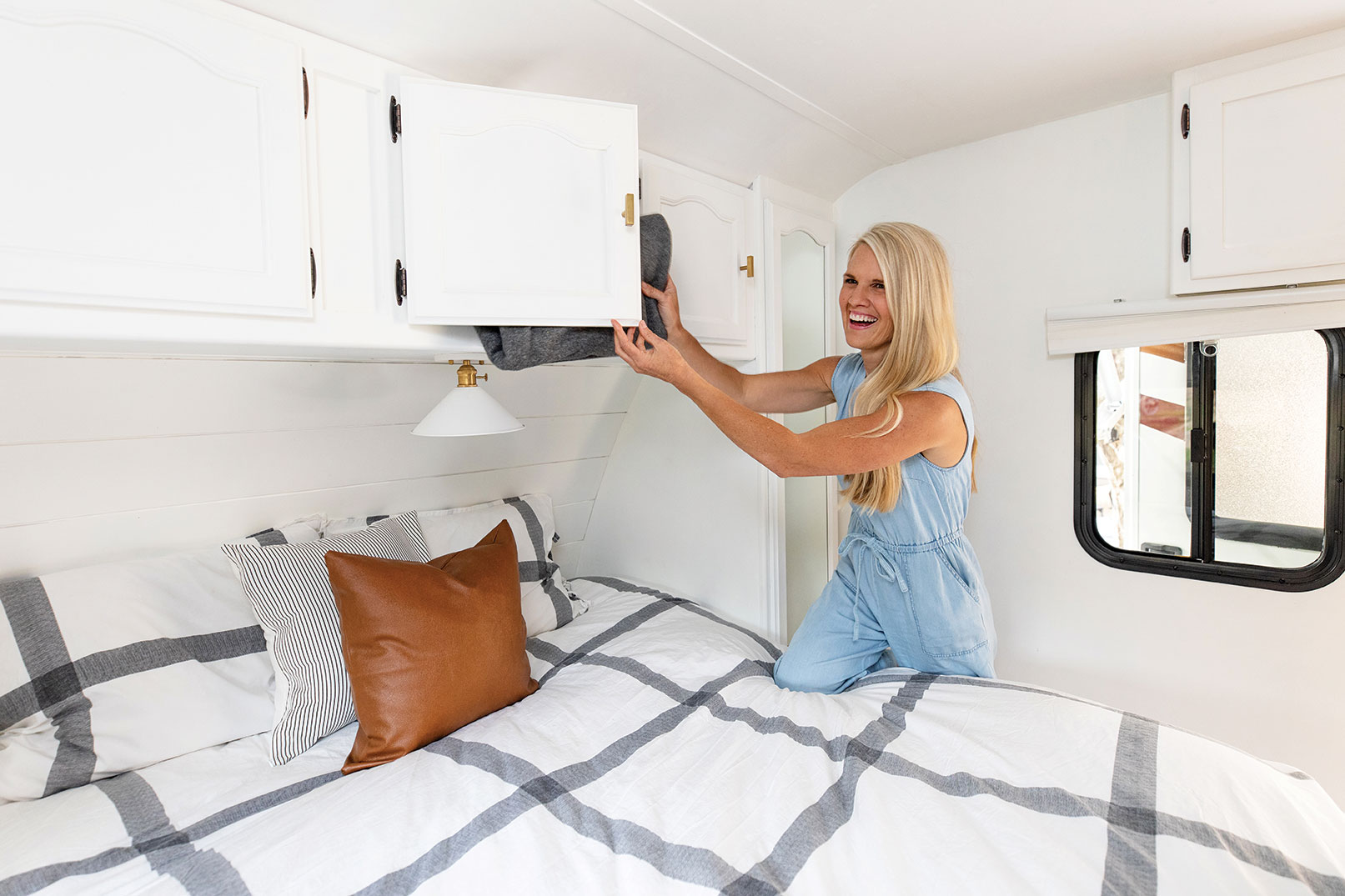 Brianne stocks the cabinets in the master bedroom of the green trailer with extra linens for guests to use as a blanket on the bed or to wrap themselves in on chilly nights by the fire outside..

“We’re still working on all of the logistics of the business,” Sean says. They’re considering offering rentals for pre-booked campsites that are otherwise hard to get (like those at San Elijo State Beach), and they’re still working out pricing and other incidentals. “But I’m having a lot of fun redoing the trailers,” Sean says. Except for that painting part, of course. 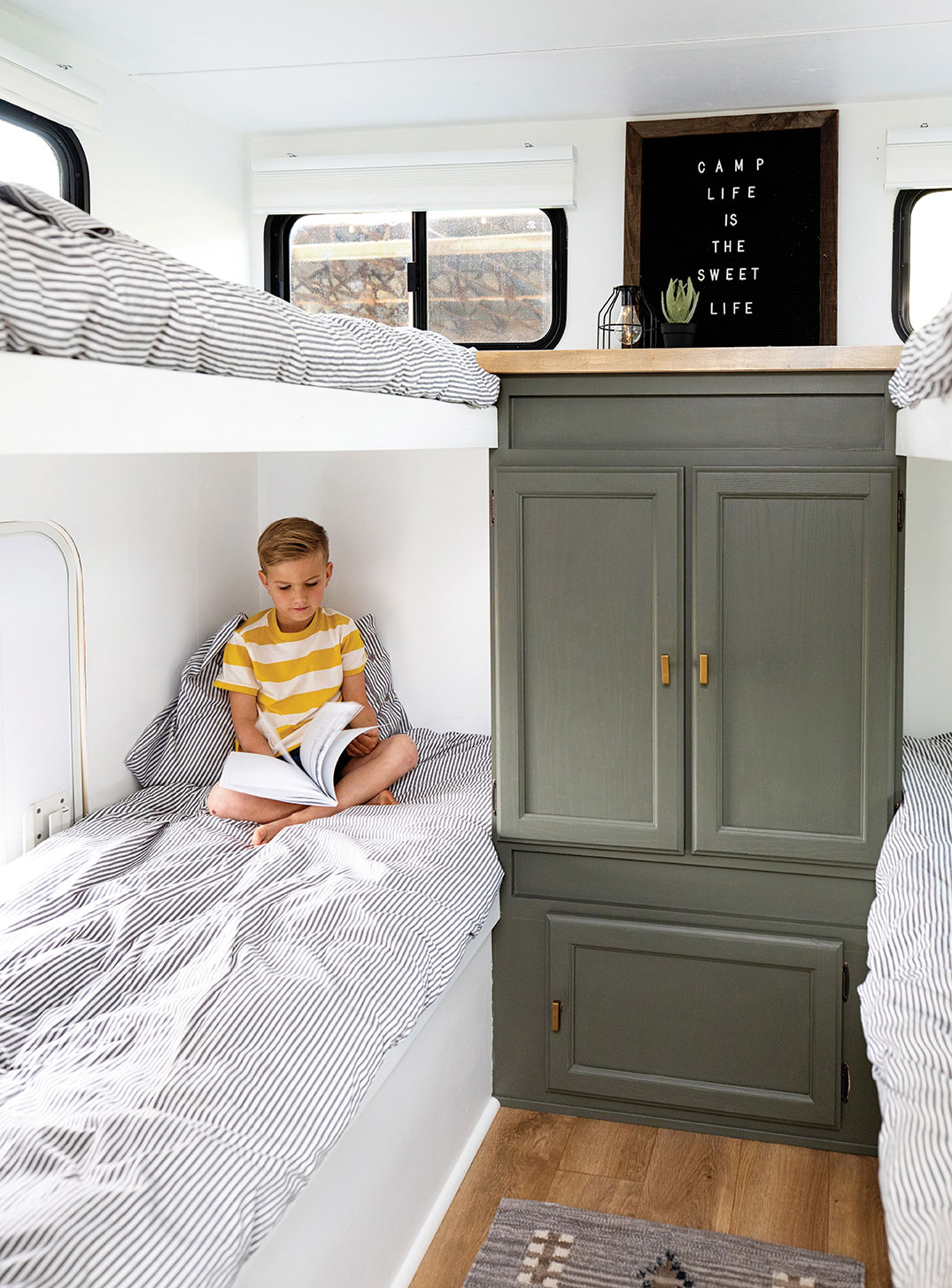 Weston reads in one of the four bunks in the green trailer.

More Tips for Camper Life from The Walkers

4 Design Secrets When Renting Out Your RV

Brianne and Sean Walker of Walker Campers started renovating campers for themselves, but as interest in their community grew, they began to make some adjustments in their design choices to best serve short-term guests.

Get Brianne and Sean’s tips for designing your camper, RV, trailer or other small space as a vacation rental. 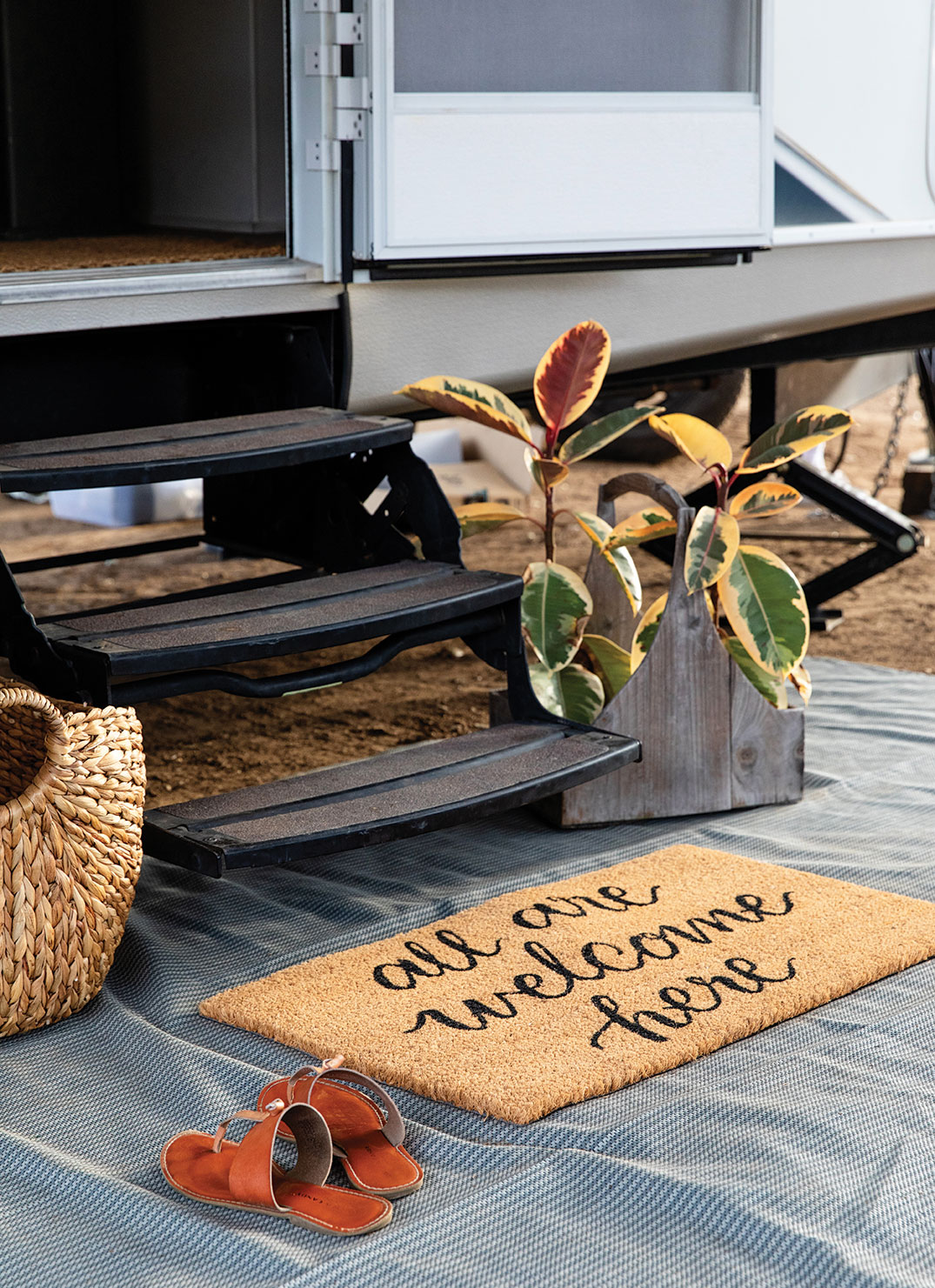 The Walkers know their way around San Diego’s camping scene, and have compiled a list of their favorite family- and RV-friendly campsites with lots of advice, all the details and recommendations for activities like hiking, sightseeing, day trips and more at each site.

Get their list of the best nearby campsites in the San Diego area here.