“Guardians of the Southern Gate” 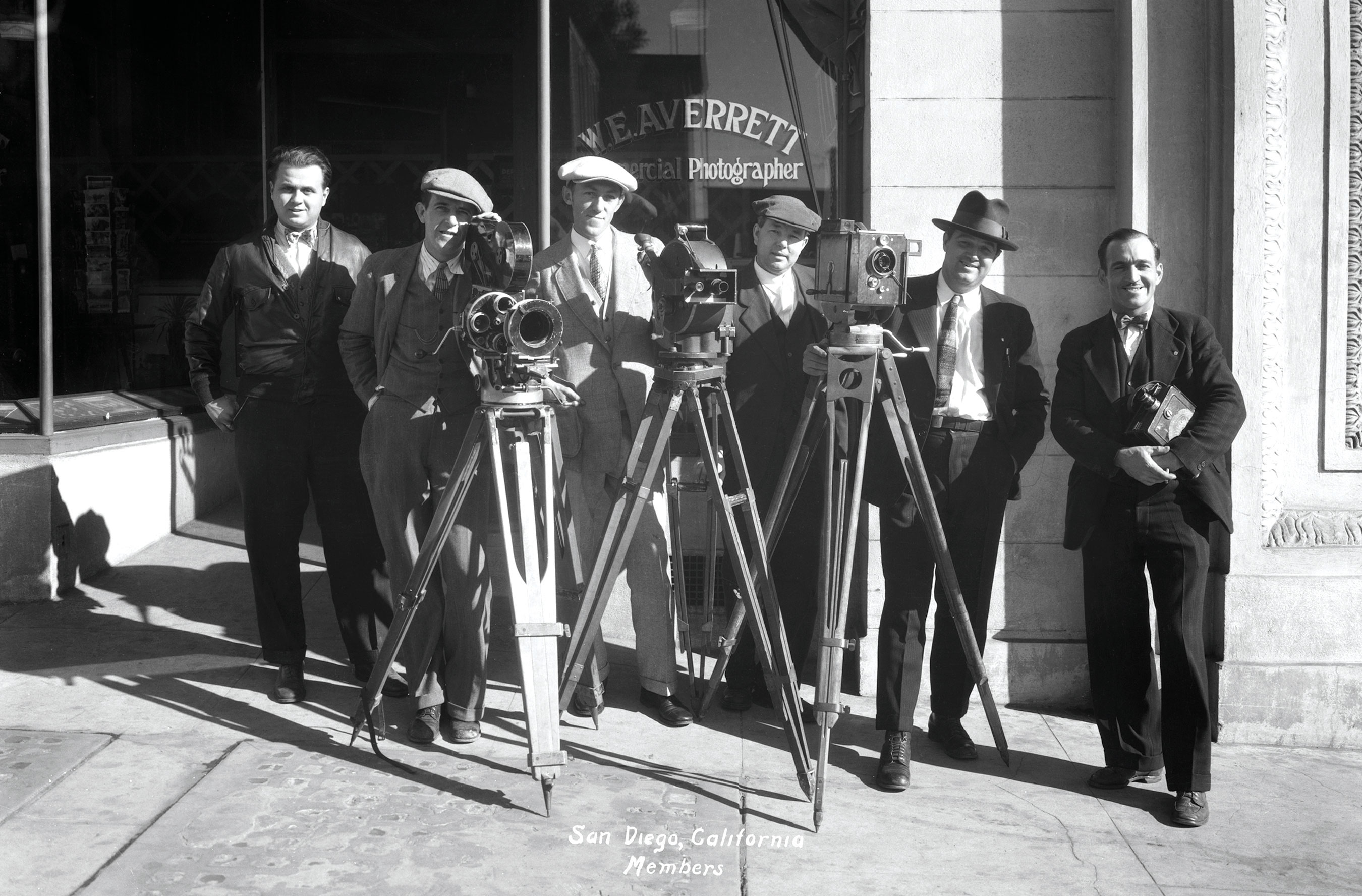 Posing with the expensive tools of their trade, these San Diego motion-picture cameramen were announcing their enrollment in Hollywood’s new cameramen’s union, formally called the International Photographers of the Motion Picture Industries, Local No. 659 of the International Alliance of Theatrical Stage Employees and Motion Picture Machine Operators of the United States and Canada—a mouthful more often identified by its initials: IATSE–MPMO.

The photo seen here was published in the June 1929 issue of The International Photographer, Local 659’s monthly magazine, with the larky pro-union caption “Guardians of the Southern Gate.” Although most of its members worked in the Los Angeles movie studios, commercial newsreel and industrial cameramen also joined to benefit from the Local’s advocacy for professional education, employment networking, safety regulations and clearly defined contract and wage structures in a young industry already famous for its perpetual state of technological and artistic disruption.

None of the photographers seen here were new to motion-picture work, and their very expensive, hand-cranked, 35mm, silent-movie cameras attest to their owners’ skills and success. The shopfront behind them was that of freelance news photographer Walter E. Averrett (1885-1958), standing second from right. In business since 1913, Averrett added motion camera work in the late teens, and produced a local weekly newsreel for the Balboa Theater beginning in 1926. Averrett’s French-made Debrie “Interview” newsreel camera, with tripod and essential accessories, retailed in the early 1920s for about $1,400, more than $20,000 today.

At far left is Robert F. Bryan (1905-1977), an Averrett employee and Local 659 member since June 1928, and the stepson of Harry T. Bishop, longtime head of the San Diego Union’s photo department. Next is Harry A. Flenner (1895-1977) with his Bell & Howell model 2709, Hollywood’s most popular camera, its full kit costing more than $33,000 in today’s dollars. Flenner was Averrett’s partner in his local newsreel company. On his left is J.M.F. Haase (1893-1959), the U.S. Navy’s senior aerial photographer on North Island since 1911. His Akeley “Pancake” camera was specifically designed for rapid action work, its kit costing more than $50,000 in today’s dollars.

Standing between Haase and Averrett is James B. Herrick (1890-1975), a still and motion cameraman working for Schuyler Bunnell’s Photo Shop on E Street. At far right is James R. Palmer (1897-1980), cradling his Devry Standard Automatic “Lunch Box” camera, one of the earliest lightweight spring-driven cameras that could be used for hand-held as well as tripod work. In 1929, it retailed for $150, about $2,100 today. Jimmy Palmer grew up in San Diego’s Savoy Theater, which was managed by his father. By 1920, he had broken into Hollywood studio work as an assistant cameraman and later worked at MGM. Although he frequently worked in San Diego in the 1920s, by 1929, he had earned a seat on Local 659’s board of executives as its industrial cameramen’s representative, among them his friends in San Diego seen here. ϖ