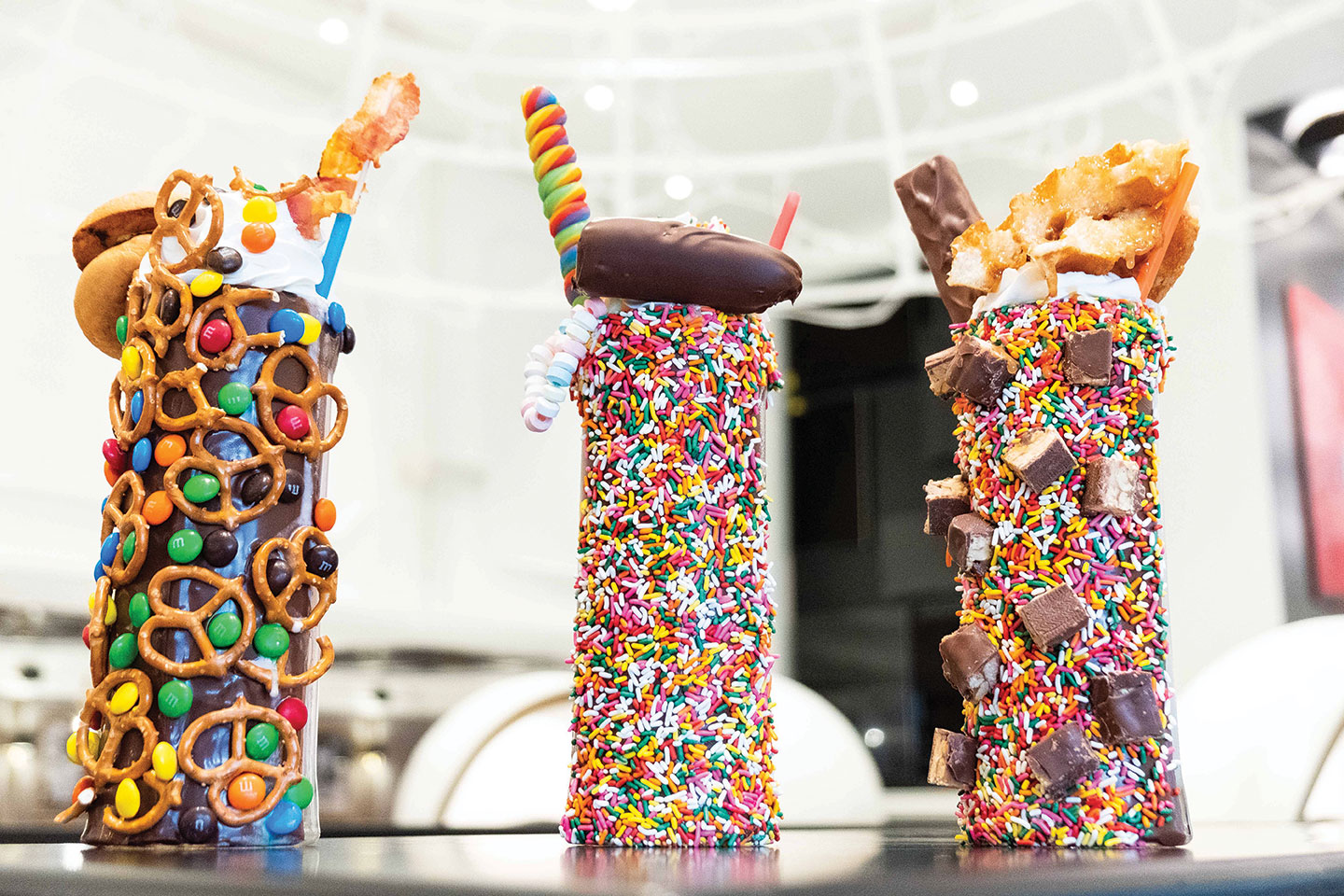 Remember dinner and a movie? It was probably your grandparents’ first date. Of course, that was long before on-demand streaming services made moviegoing feel antiquated.

But now Theatre Box in the Gaslamp Quarter is taking a direct shot over the bow of Netflix so you can chill with an over-the-top movie and dining experience that’s kind of like Willy Wonka meets Guy Fieri, as produced by Jerry Bruckheimer.

Sugar Factory is the stand-alone restaurant that’s part of the Theatre Box complex and you can have a sit-down meal in the dining room or order off the menu right from your comfy theater recliner (you might want to hold off on crunching that avocado toast during the love scenes). Sugar Factory is a big, airy room with stark black-and-white accents and illuminated pod seating areas that give the place the feeling of a Stanley Kubrick set.

The massive menu is thick as a script, starring monster burgers, including the truly terrifying Donut Burger—that’s just what it sounds like it is and which my server swore actually gets ordered. 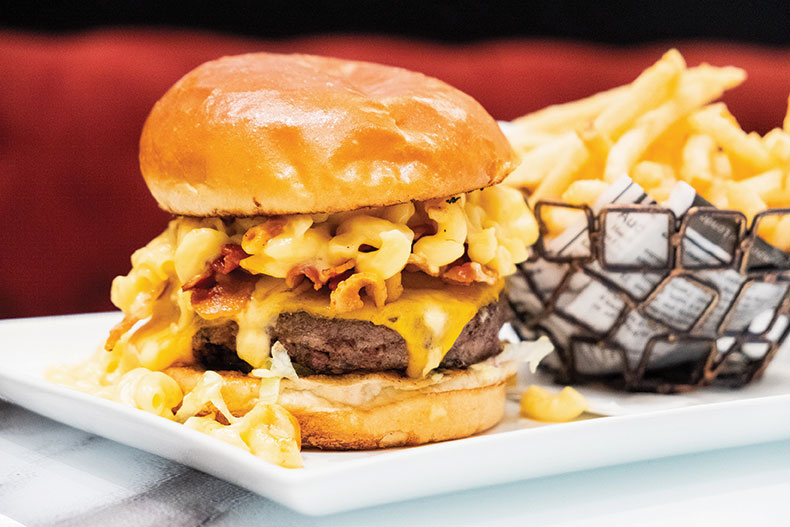 Now you know why Sugar Factor calls this burger, topped with creamy macaroni and bacon, The Big Cheesy. Photo by Haley Hill Photography.

There are also pasta dishes, pan-roasted salmon and classic surf-and-turf steak and lobster; brunch is served until 4 p.m., featuring crêpes, omelets, and fried chicken and waffles.

The desserts are where things really get cranked up to 11, though. It’s pure imagination, or perhaps a sinister plot hatched by Big Insulin and the American Dental Association, with fever-dream milkshakes and sundaes topped with donuts, cupcakes and s’mores, even one with a cheeseburger slider. There are families with saucer-eyed kids (although it could have just been the sugar rush kicking in) celebrating birthdays with desserts that literally send sparks flying. When the smoke clears, it smells like…victory. 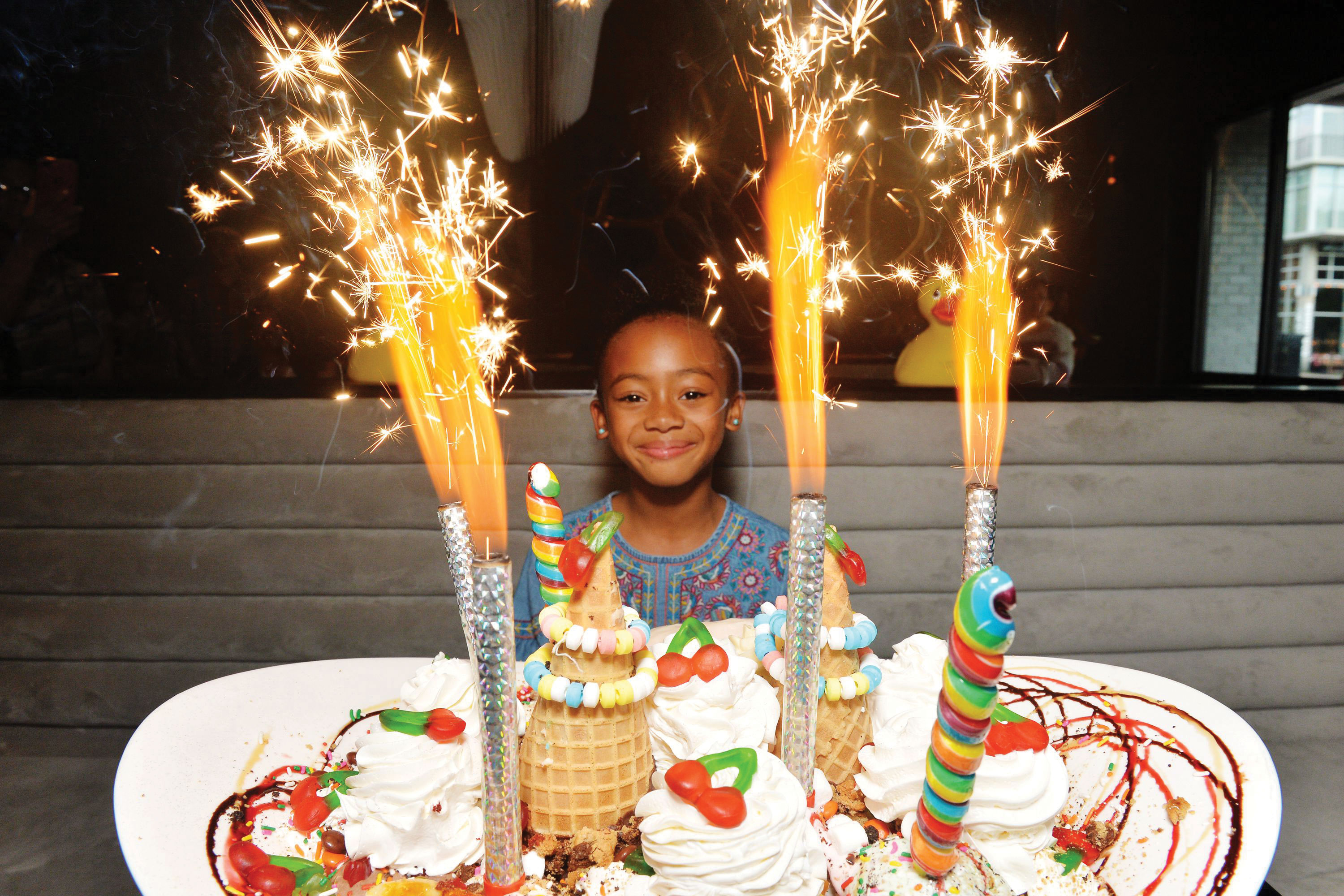 It’s all as brash and loud and people-pleasing as a Marvel superhero movie, with food that seems designed to be shared on Instagram rather than actually consumed, though everyone seems to be having a grand time trying. Case in point are the 36-ounce goblet cocktails shrouded in a smoky fog like an Addams Family concoction and garnished with sweets—from cotton candy to gummy bears—that are perfect for drinkers who still have their training wheels on. And you can order virgin versions for the kiddies (somewhere Joe Camel is smiling). Naturally there are coming attractions, too—a rooftop bar, and a sports bar and arcade are both set to open this summer.

With Sugar Factory, it may not be the beginning of a beautiful friendship but you’re definitely going to need a bigger boat.

One clear-cut winner with global warming’s rising sea levels is sure to be the King Canute-approved high-tide dinners at The Marine Room. Executive chef Bernard Guillas’ sophisticated, international menu pairs nicely with the spectacular sight of waves crashing into the restaurant’s picture windows, which have held back the tide for decades (minus an El Niño mulligan in 1982). The dinners run through September, with some of the highest tides of the season occurring in July and August—particularly July 1–3, July 30–Aug. 1, and Aug. 28–30—when they are expected to be more than 7 feet (typical high tides are 4 to 5 feet). 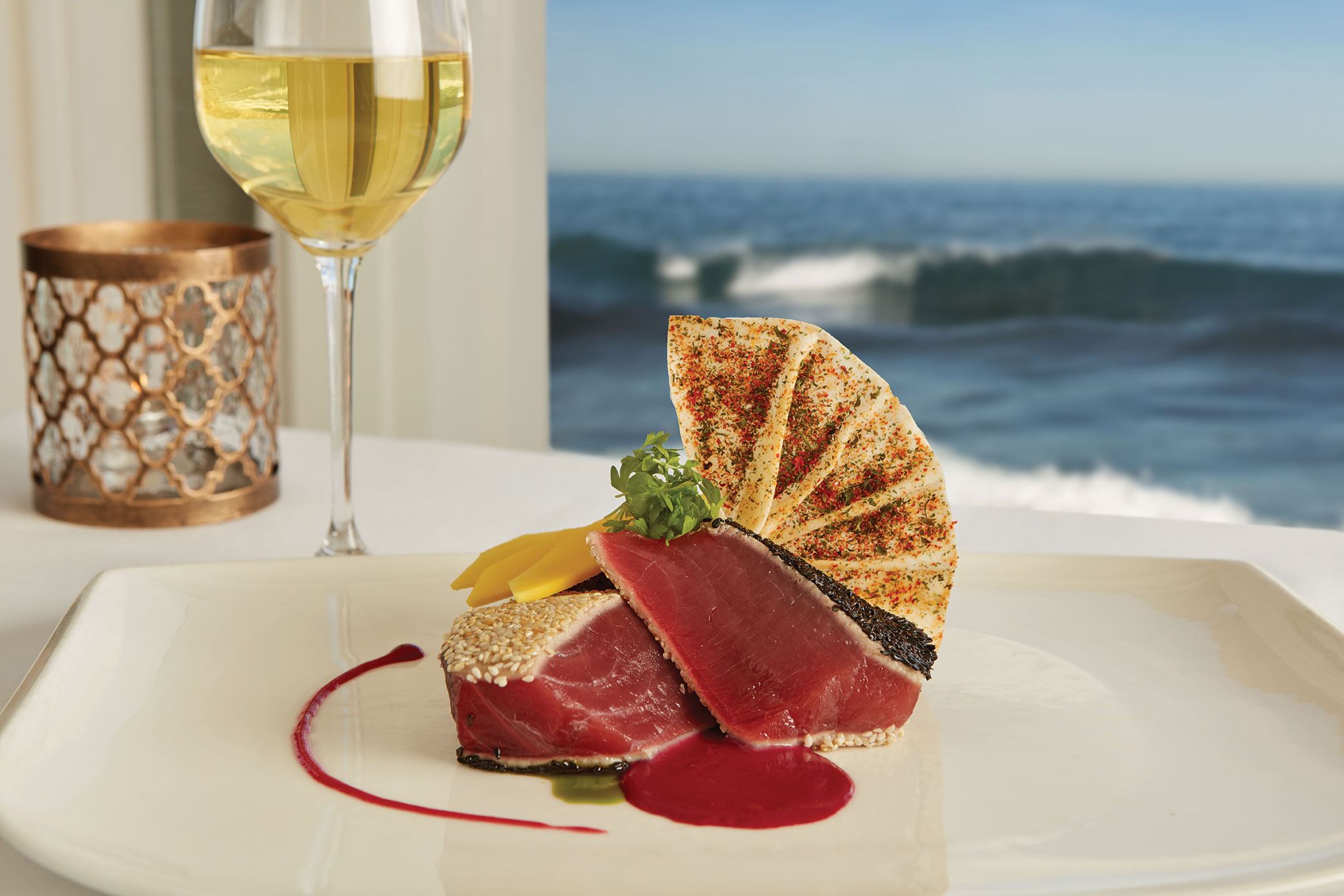 If you’re looking for another spot to wow out-of-towners—or are just in need of a romantic meal under the stars—you can’t do better than the patio dining at Mustangs & Burros, the rustic restaurant at Estancia La Jolla Hotel & Spa. Evoking a Californio past with its distressed bricks, wrought-iron accents and Mexican textiles, the property comes with plenty of history and none of the kitsch of Old Town. Add in the beautiful landscaping, burbling fountains and gaping fireplace, and you’ve got yourself the makings of a real Rancho Relaxo escape. Or do some role-playing based on Helen Hunt Jackson’s Ramona…whatever’s your thing; we won’t judge. 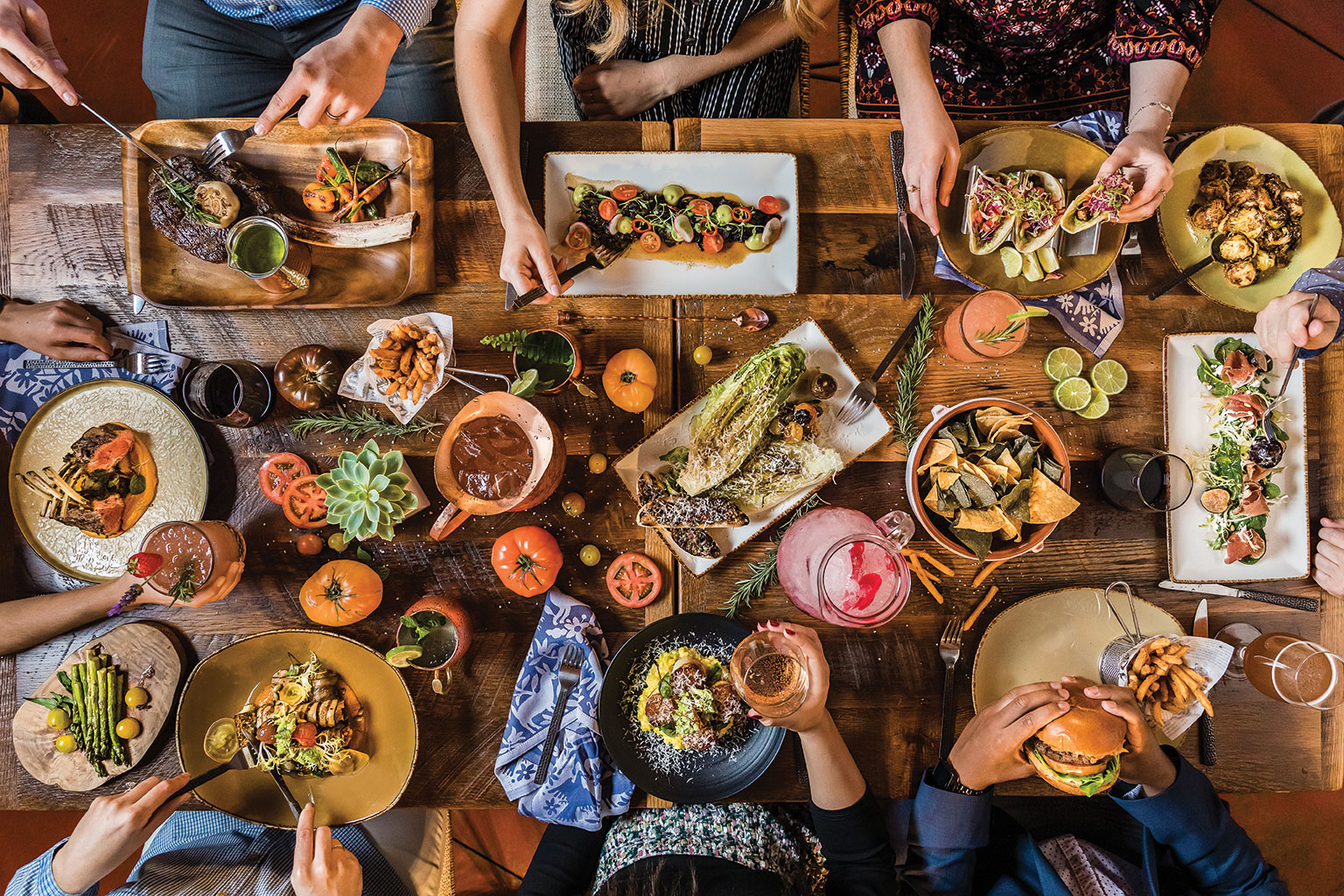 The menu is big on coastal fare like charred octopus, ceviche and seared diver scallops, but also serves up meat heavy hitters such as a tomahawk steak and rack of lamb; vegans and vegetarians can also play along with dishes like the carrot-and-butternut squash soup and eggplant cannelloni. It’s all pretty straightforward and well-executed, but it’s the ambiance and added perks that take things to another level, like being dog friendly (there’s a dog menu that includes grilled chicken or steak tartare, steamed rice and veggies, and an assortment of organic treats), a daily happy hour served from 3 to 6 p.m., and free valet parking. And if you really want to get your guests out of your hair, buy them a locals’ Sunday pool pass (with bubbly and DJs included)—they’ll be gone all day.