"I picture myself in a posh Manhattan penthouse in this kitchen." — judge Melisse Mossy 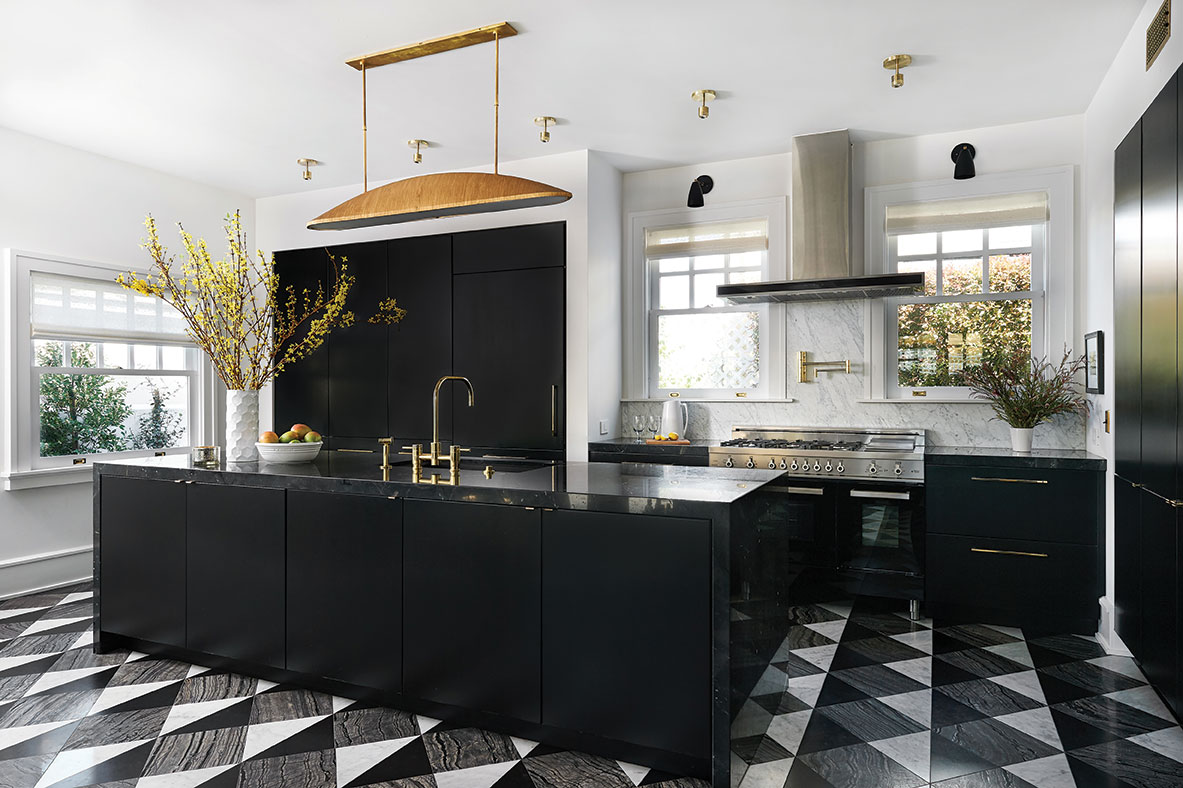 Is this a hip downtown restaurant or a homeowner’s kitchen? When interior designer Kristin Lomauro-Boom put on her creative hat for her own kitchen, she got to do something a little out there, something glitzier than a typical kitchen. The room is still highly functional, but looks like a glamorous entertaining space from Hollywood’s golden age. The flashiness works well with the regency flair of the 1912 Point Loma house that it’s in—and the pair of lion statues that greet you at the entrance. 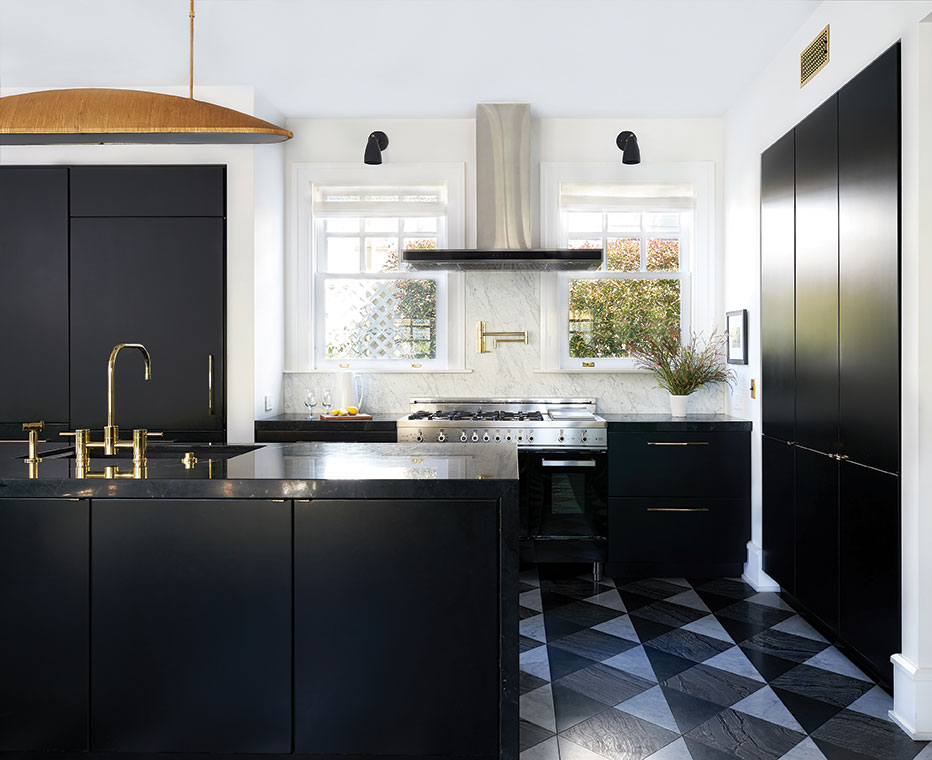 “I did so much homework on this house. This style, kind of a merge of Chicago and New York-style buildings, looks like it came from the beaux arts period but I can’t pinpoint it,” Kristin admits. “Originally, the house had a flat roof with corbels. Now it has a mansard roof.”

After gutting the kitchen to the studs, tearing out a wall, removing floral wallpaper that traveled the wall and across the ceiling(!) and linoleum, Kristin had a clean slate to “have at it.” During a trip to Paris, she saw the pattern of floor she wanted while on a home tour. 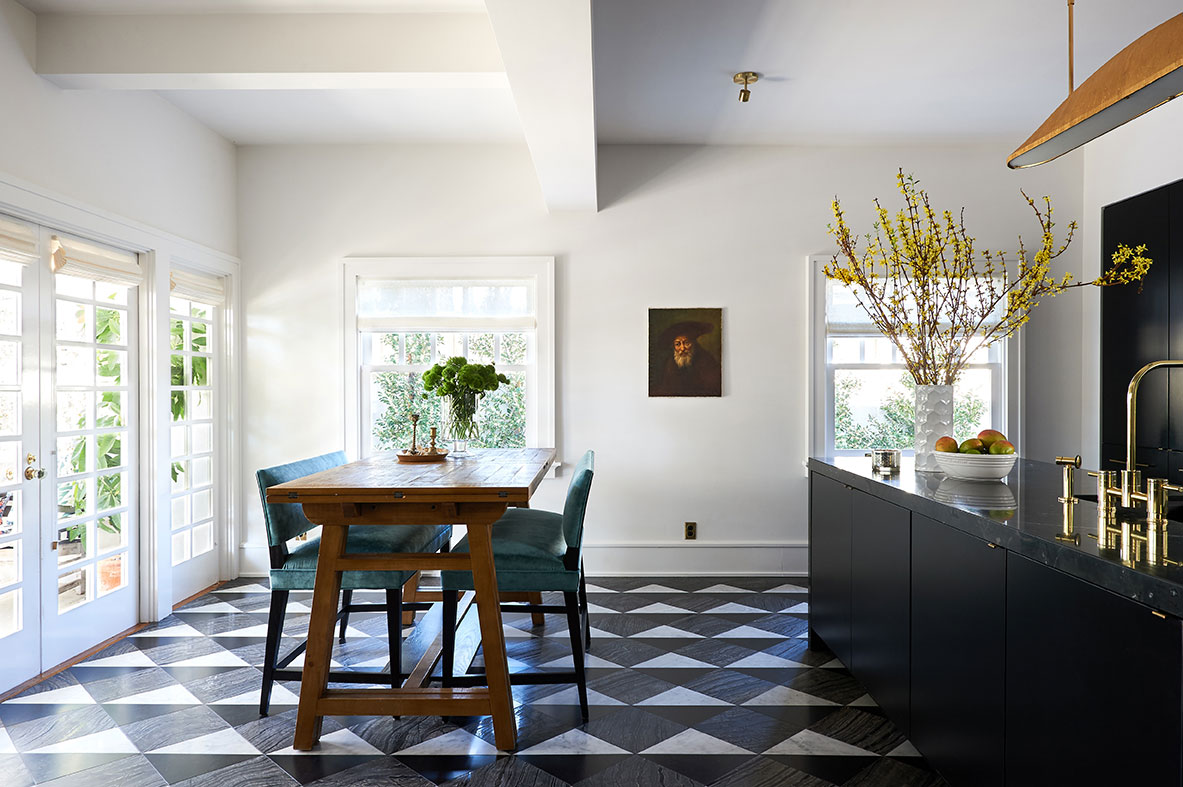 Homeowner Jordan Boom inherited a Dutch painting that’s at least 200 years old, which belonged to his great-grandfather. The artwork fits wife and designer Kristin’s idea of “going for that beautiful room and less of a kitchen.”

“I knew I wanted to do black and white on the floor,” she says. “I wanted it to be spectacular without breaking the bank. What we needed was a dramatic marble accent in gray placed within the grid of black and white Dekton to give it something a little more exotic. It was fun to figure out how we were going to angle it. We placed it on the diagonal and it’s like a work by M.C. Escher—if you look one direction you see more of a diamond pattern; look at it another way and it appears more as a zigzag.” 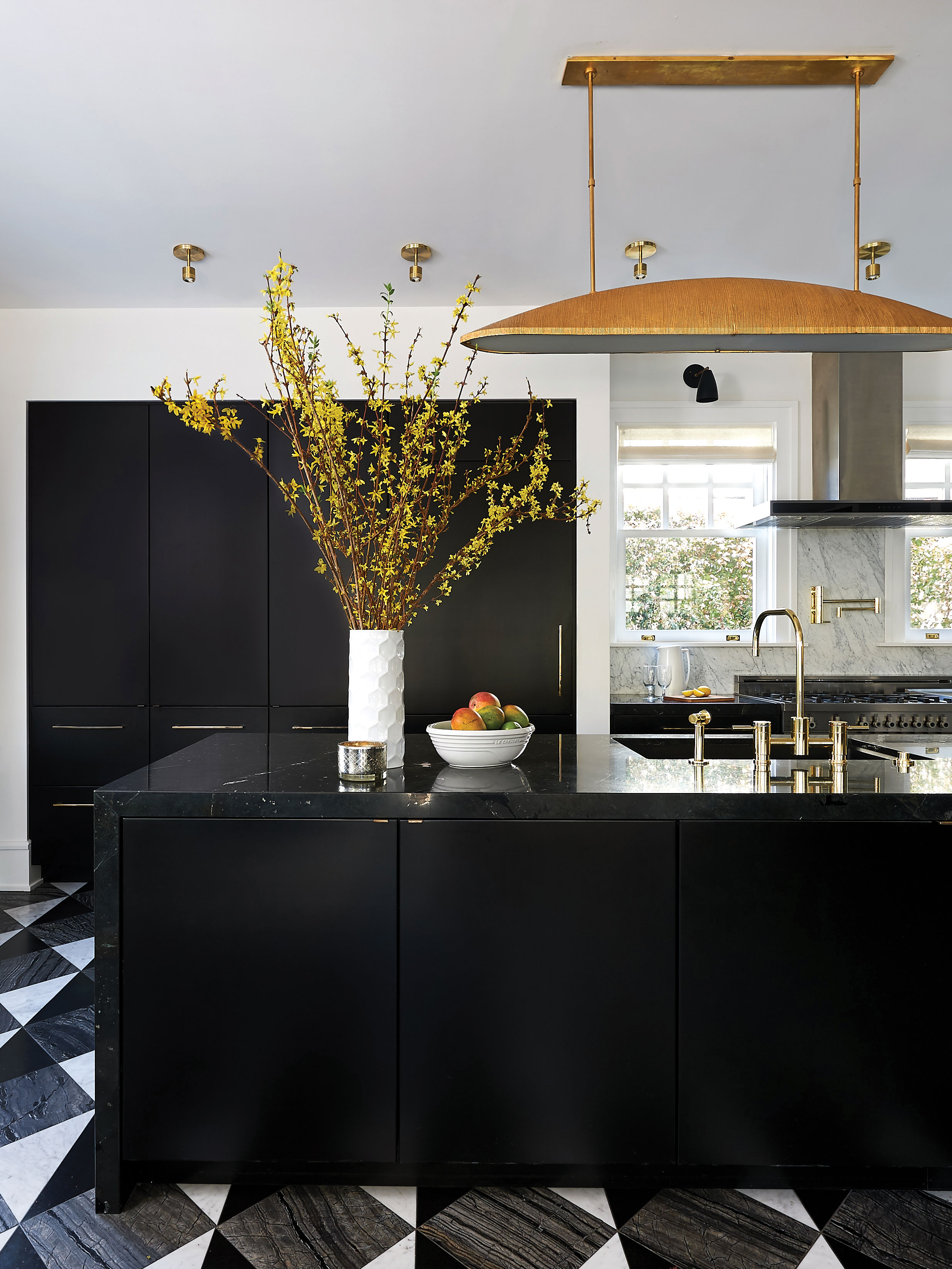 A rake-metal pendant light adds texture and curve to an otherwise smoothly flat and geometric design.

“We [Kristin and her husband, Jorden] went to so many stone yards,” Kristin says. “I was looking for something in black for the countertop and finally came across this Van Gogh granite. What I love so much about it is that it has so many marble characteristics. My 8-year-old son, Beckett, comes over with all his friends and we have lots of guests and tons of dinner parties, mixing drinks and making food, everyone helping in the kitchen. I never have to worry about anything landing on it—vinegar, lime, you name it. It has been a dream.”

Kristin does love the look of marble, though, and opted for that on the backsplash. She chose it in a white, but not a solid white, so that it would be simple and blend in with the wall while still having some personality. 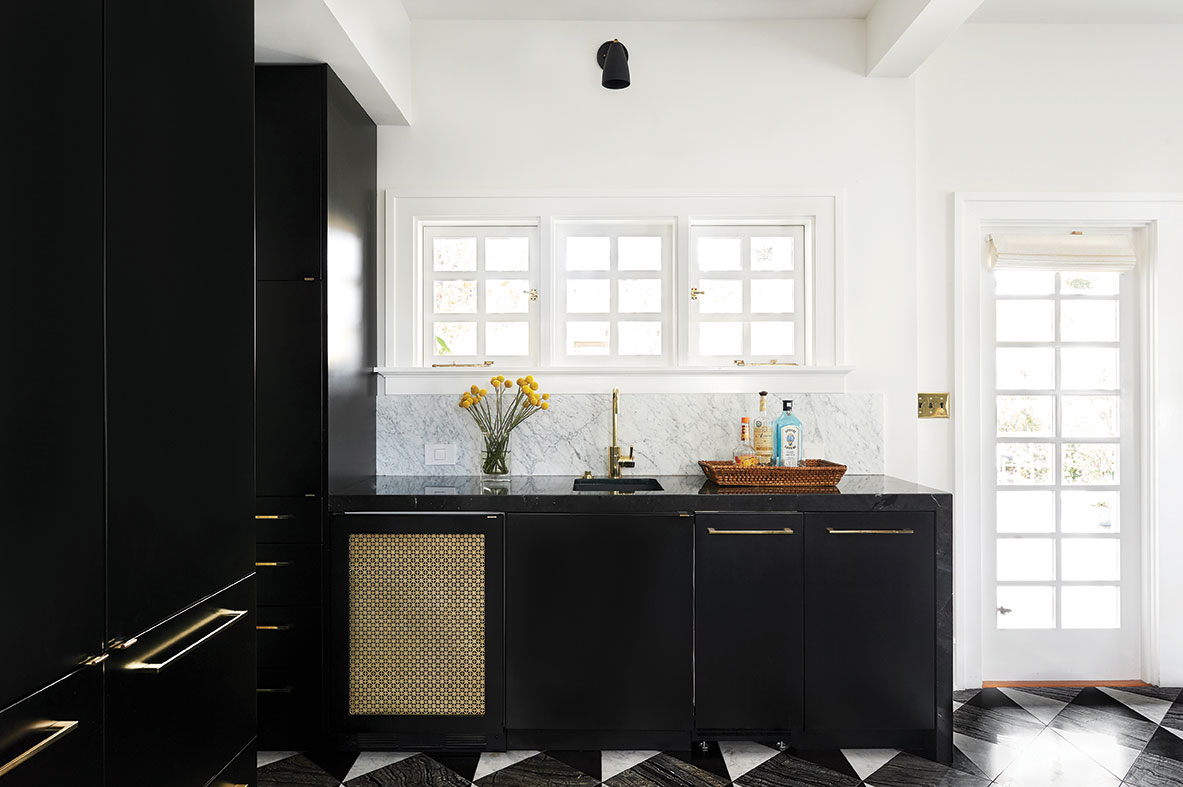 More character was added with a five-foot-long, rake-metal pendant light over the island. “Every surface in this kitchen is flat, so we needed something that was the perfect scale and added texture,” Kristin explains. “The whole house had brass fixtures—there wasn’t one element that wasn’t brass—so we knew we were going with brass. I love how the pendant has the presence and solidifies the brass in the room because the other brass is subtle and sleek.” 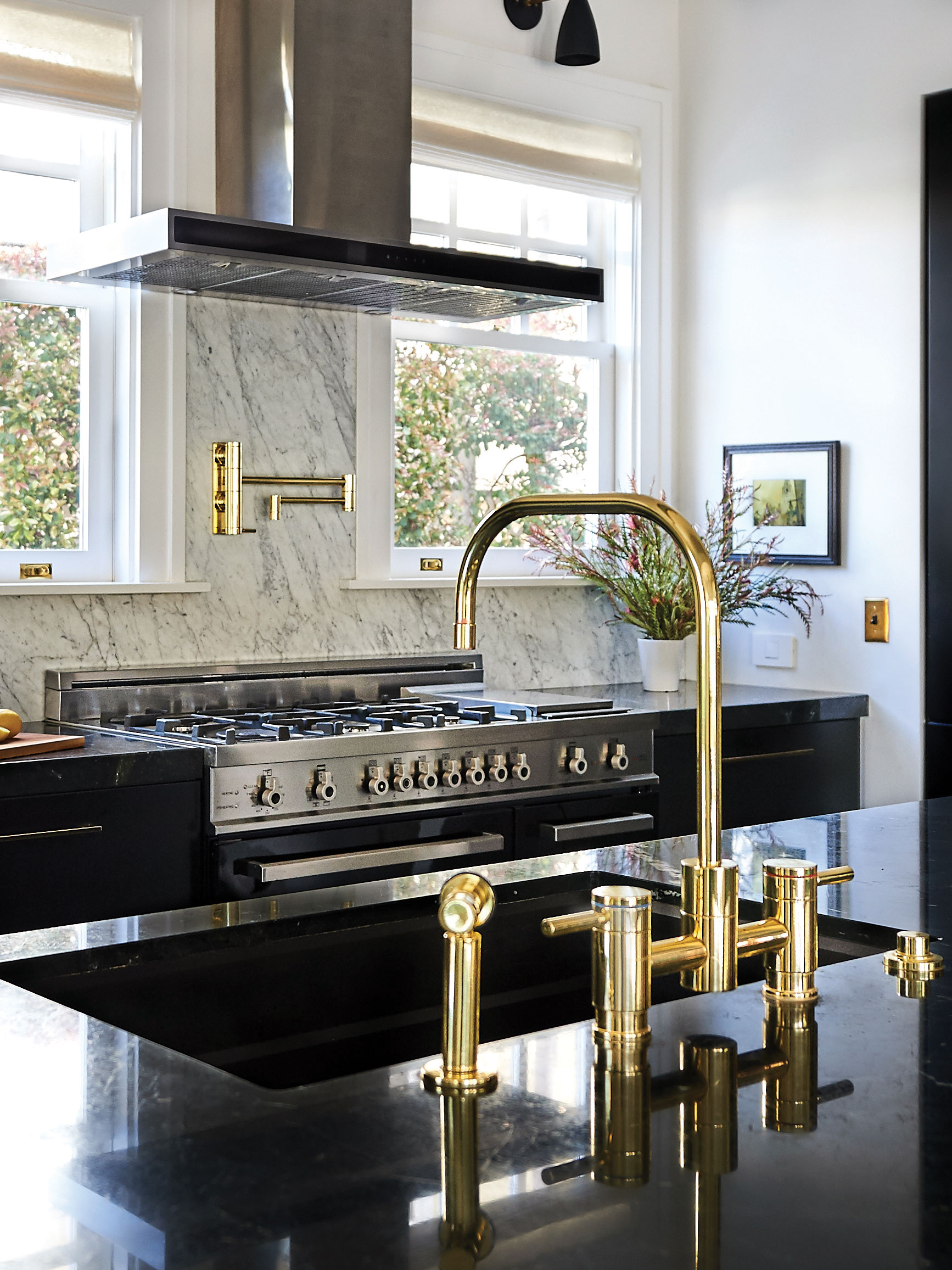 Sleek brass faucets and a marble backsplash add elegance and brightness to the black kitchen theme.

In direct contrast to the rest of the room, a more rustic wood table that stretches from 6 to 12 feet—about the same length as the counter—adds the warmth of a Downton Abbey servant’s kitchen to the vibe. “You can seat 15 people around it. It’s great for game nights,” Kristin says.

Chairs in plush, velvet upholstery bring the room back to its dreamy atmosphere. With a bit of imagination, it would be easy to envision a silk-gowned Mae West lounging on one while asking Kristin to peel her a grape. 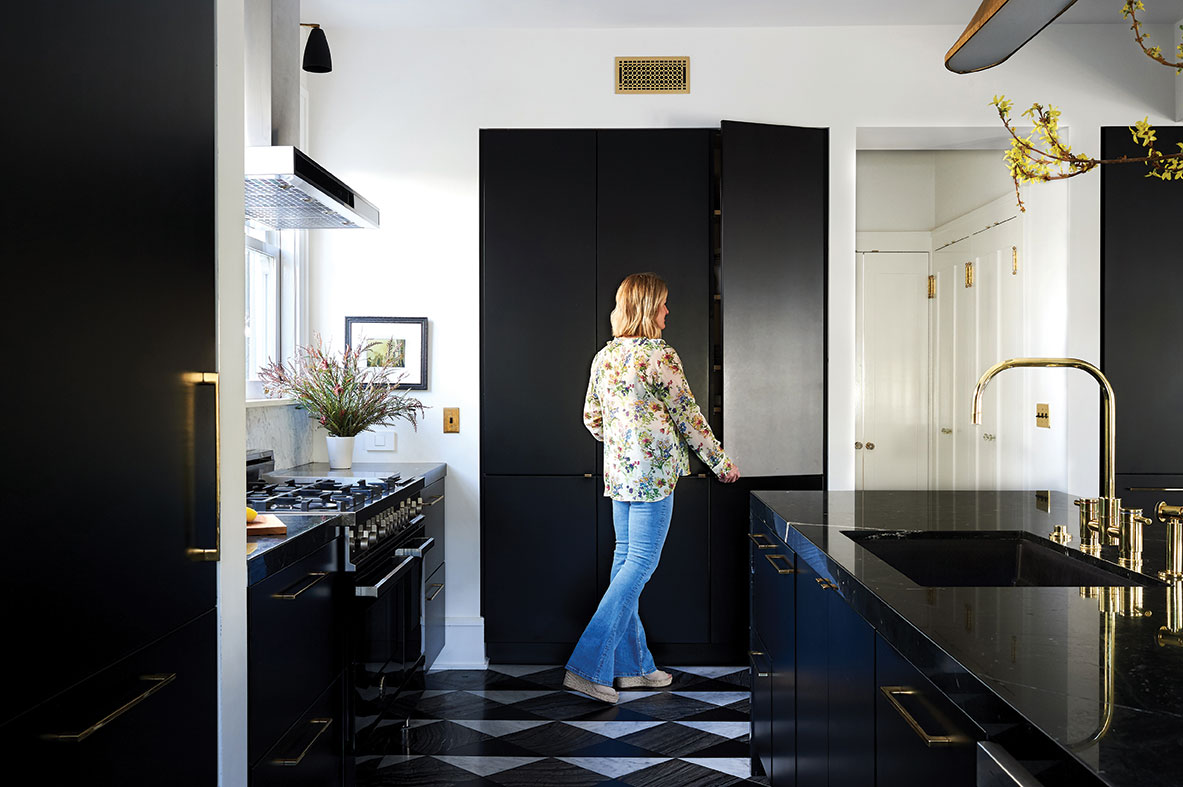 Cabinetry and built-in pantries were installed to bring in a clean look. “There’s no choppy space of uppers and lowers,” says homeowner and designer Kristin Lomauro-Boom, pictured here.