Odds and Ends: A Changeable Garden 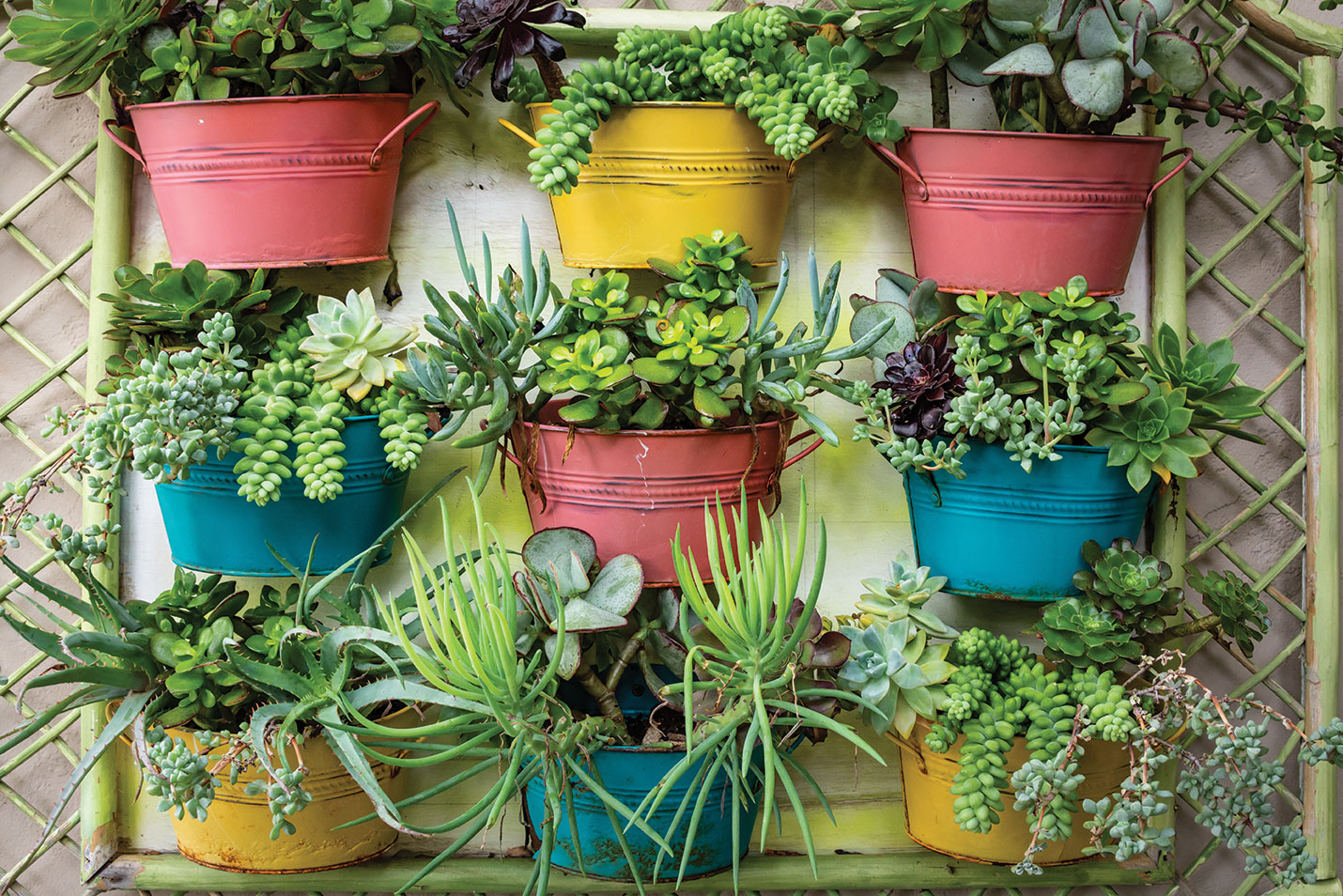 Friends gathering for Steve Bliss and Debby Brockman’s annual Christmas bash always head to the backyard first. “Everyone wants to see what we’ve done now,” Steve says. “The yard changes constantly so they expect something new.”

Most of the time, what’s “new” in the compact Clairemont garden is “old”—discards salvaged and repurposed by the creative couple. Broken tiles become bold mosaics, scrap lumber turns into patchwork paneling, weathered windows link into a folding “windscreen,” a tree stump lives on as a bar base. 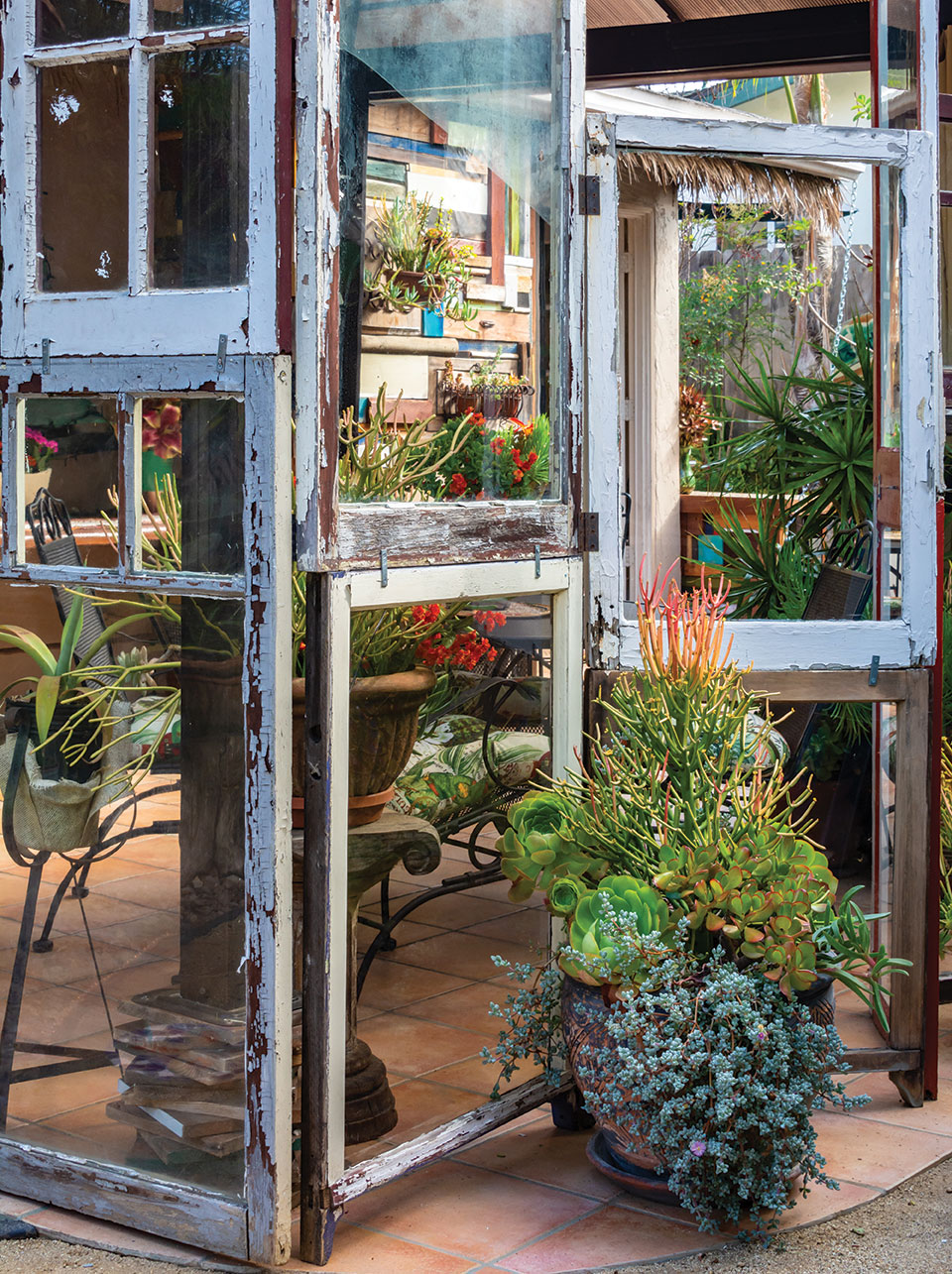 All combine in their “funky party yard” with a palapa-shaded bar, barbecue and cozy patios that wowed more than 500 visitors on last year’s Clairemont Garden Tour. Tour-goers also lauded the newly renovated front yard that replaced a sloped lawn with a drought-tolerant garden bordered by a sinuous retaining wall of handcrafted gabions. 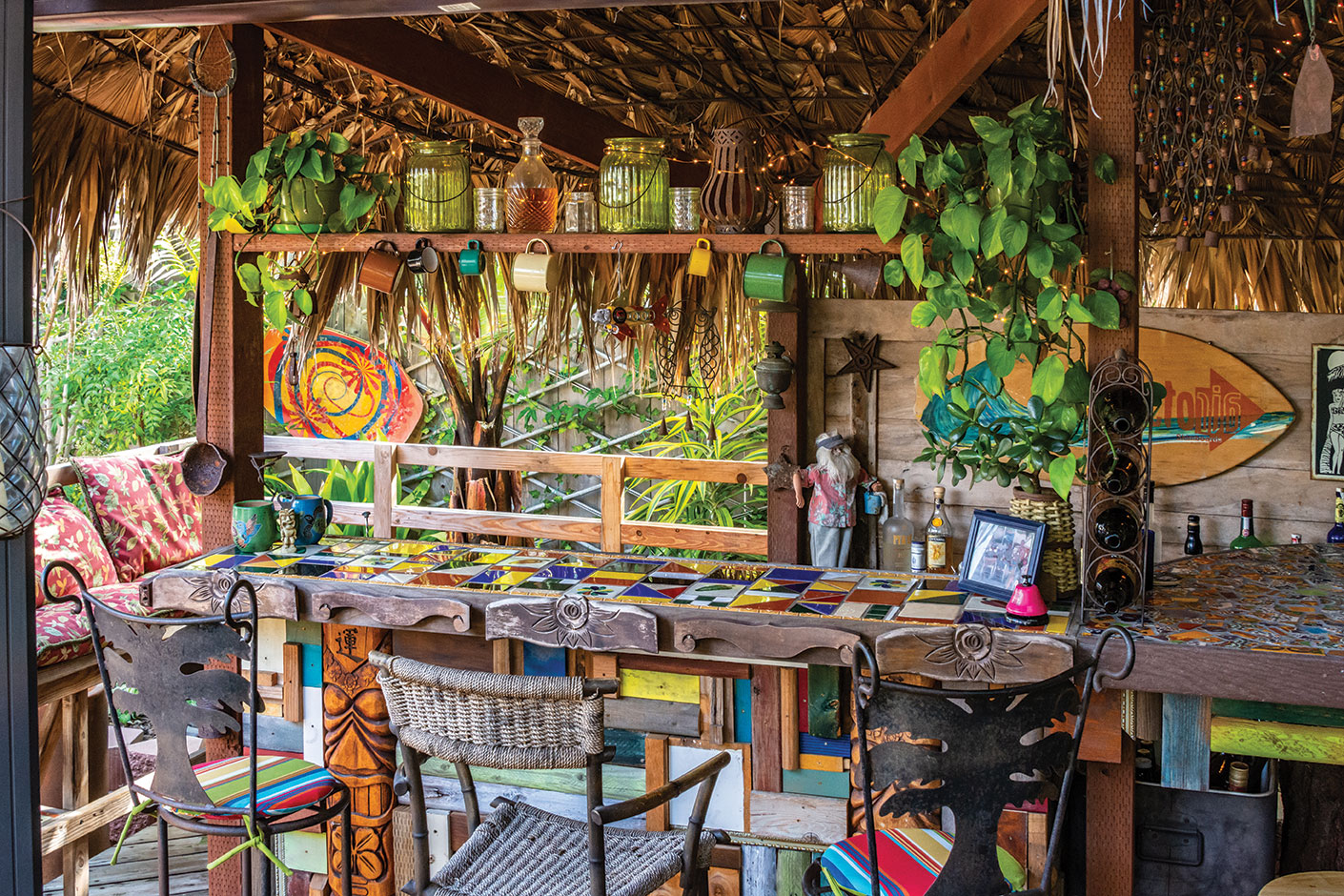 One of the first mosaics Debby made tops a long bar edged with chair backs she repurposed.

“People were so surprised, especially when they saw the back,” says Debby who has lived in the urban neighborhood for 32 years while raising three children. “Who knew you would find something like this here.” 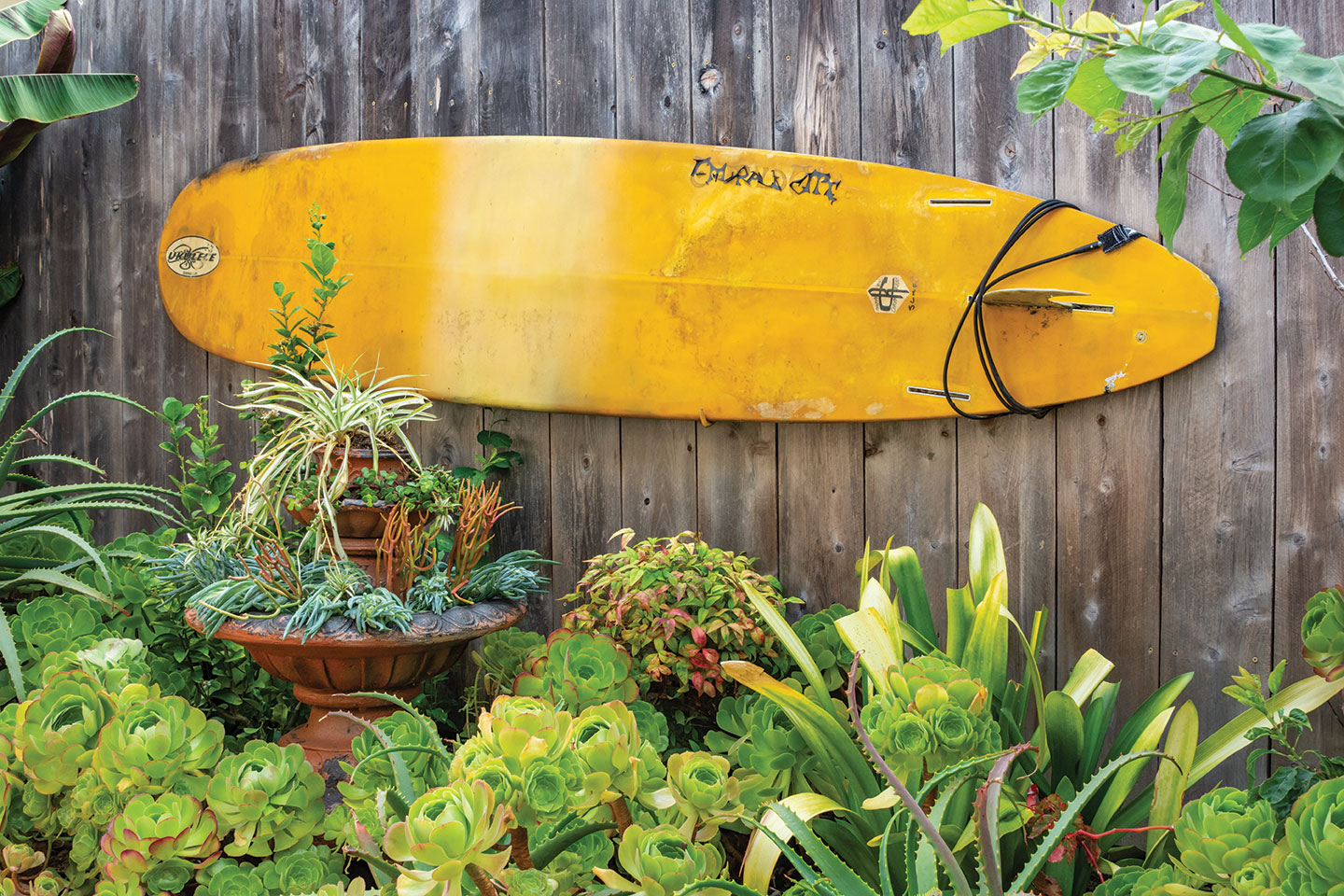 A surfboard once used by Debby’s oldest son hangs above a side-yard bed.

The daughter of missionaries, Debby spent most of her childhood in Argentina, Uruguay and the Amazon before returning to her native California to study art. One of her paintings hangs outside the front door along with a collection of geckos that, like much of the home and garden decor, echoes the Latin American culture she loves. 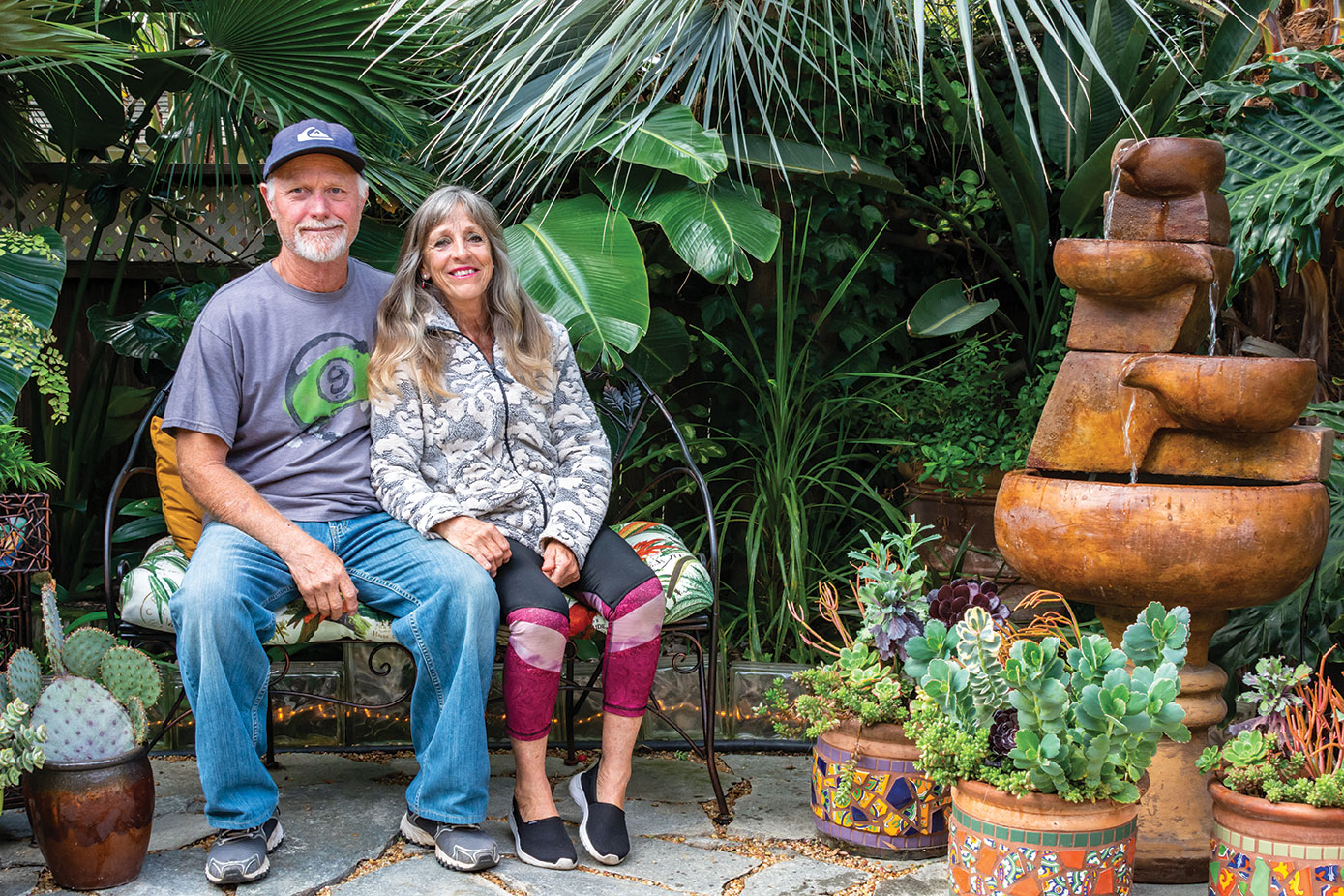 Married for a decade, Steve and Debby partnered to create their “funky party yard.”

A San Diegan since infancy and the father of two boys, Steve was hired by Debby two decades ago to create the home’s initial landscape dominated by palms, bamboo and other tropical classics that still thrive there. Major redos date from their marriage 10 years ago and their DIY teamwork. “Steve has an artist’s eye and he knows plants so well,” Debby says. “We really complement each other.” 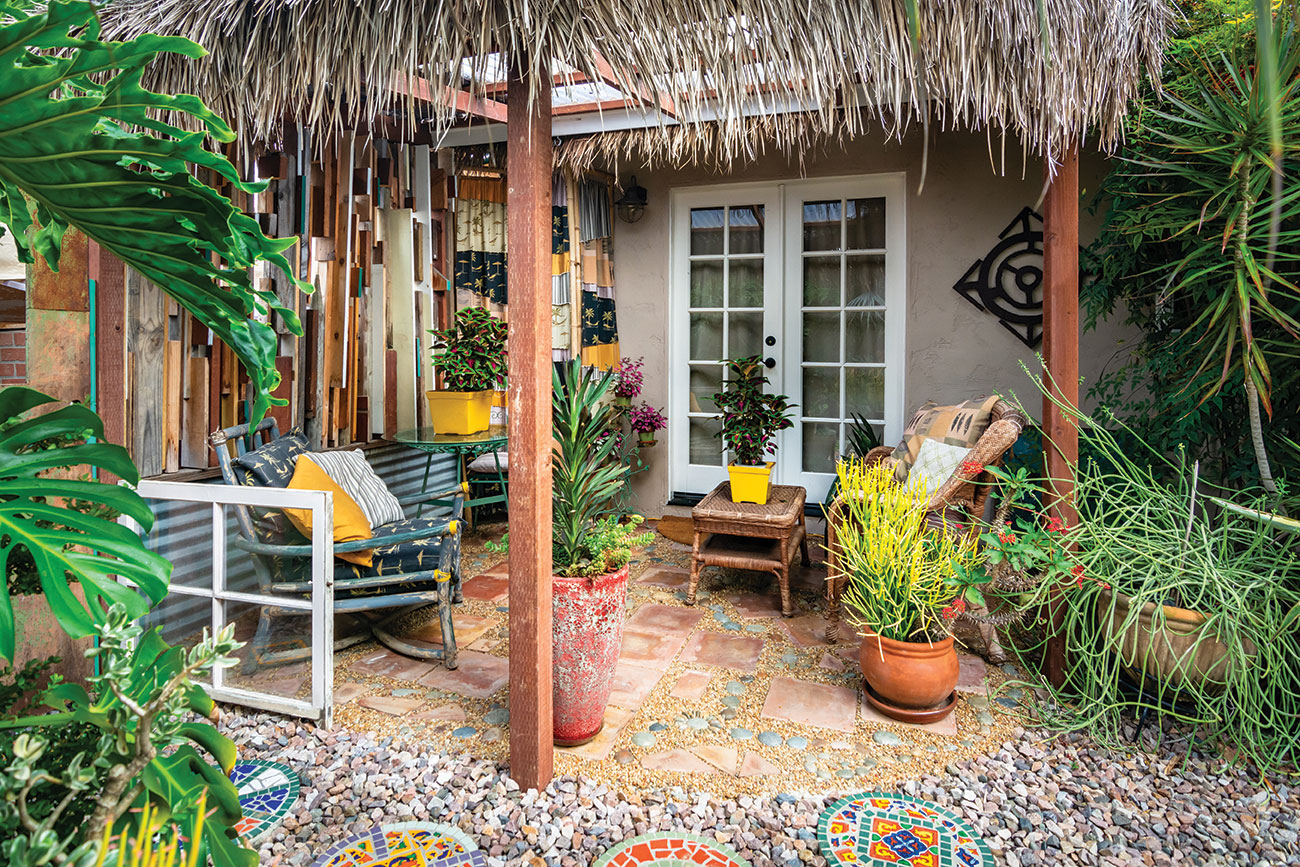 Sometimes their brainstorming gets a boost from Pinterest, one of Debby’s current obsessions. “It always gets me in trouble,” she says with a grin. “I get lots of ideas and then we put our own stamp on them.” 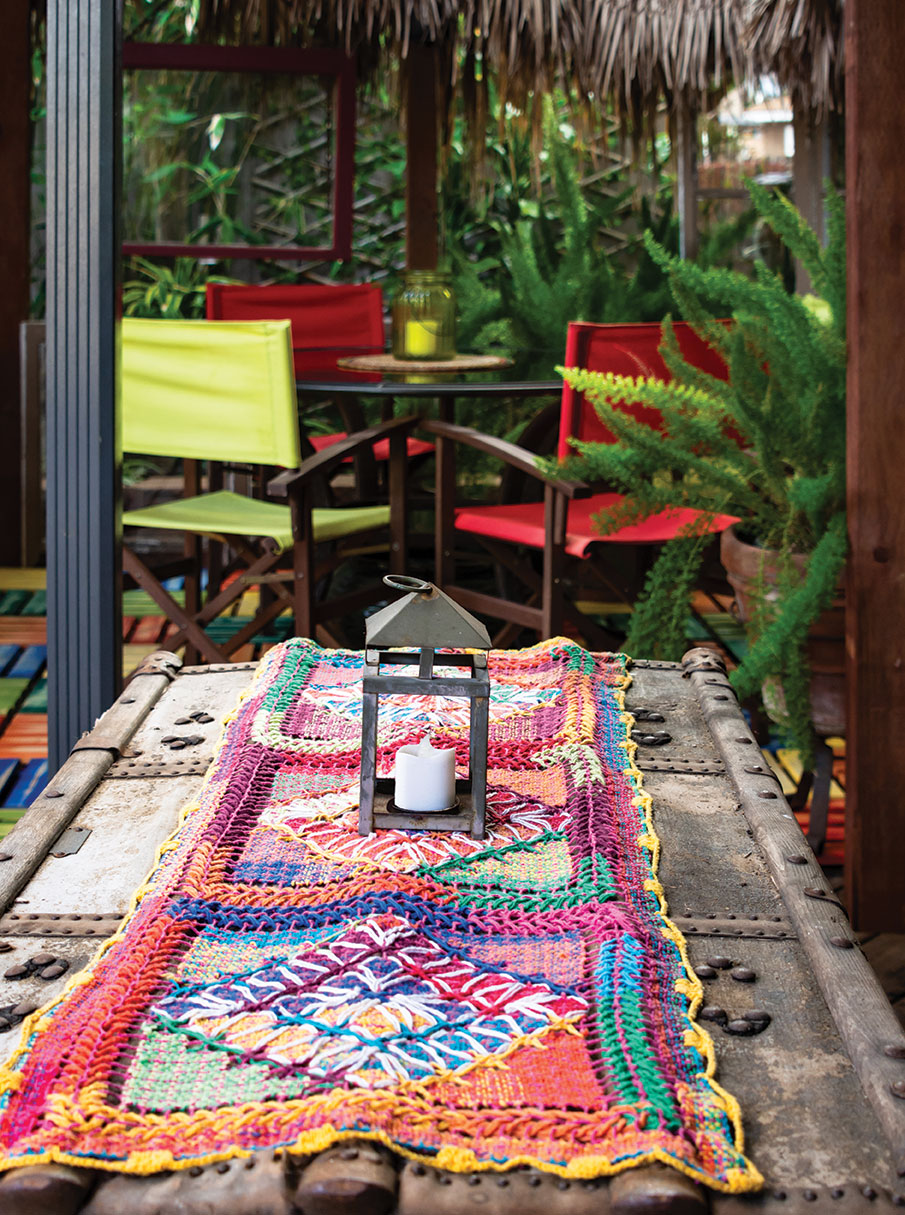 A crochet runner from Brazil tops a rustic chest.

Her newest hobby, mosaics, blossomed after Steve taught her to use a tile saw. “Right away, she started cutting angles and making patterns,” he says, pointing to her first project, a section of the outdoor bar topped with folkloric Mexican tiles. “Then it just snowballed.”

A part-time fitness instructor who plays beach volleyball, soccer and other sports, Debby harnesses her high energy to shape intricate mosaics on everything from ceramic pots and stepping stones to a shower in their Nicaragua vacation home. ”I just sit down and do detail,” she explains. “Anyone can do mosaics if they have patience.” 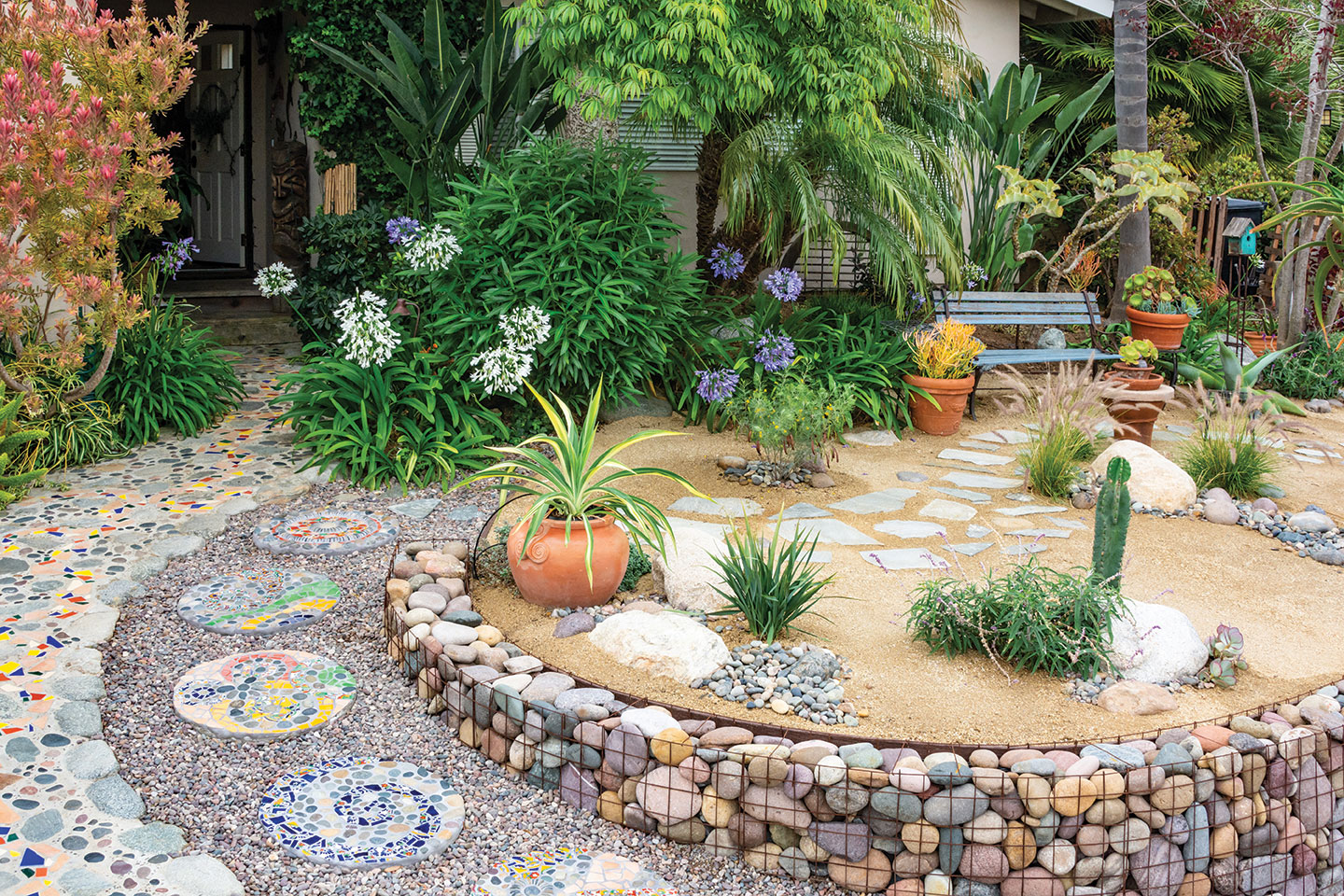 Discarded circular stepping stones and a concrete walkway were mosaiced by Debby.

A remodel of their mid-1960s two-story home removed walls to create an airy great room that fills to overflowing when the couple entertains their large combined family, including five grandkids. French doors here channel partygoers into the backyard where two gazebos, which Debby and Steve built from kits, shelter a small tiled patio and adjacent wood deck. Nearby, outside the master bedroom, is a second cozy patio with a stone and tile mosaic floor Debby crafted. 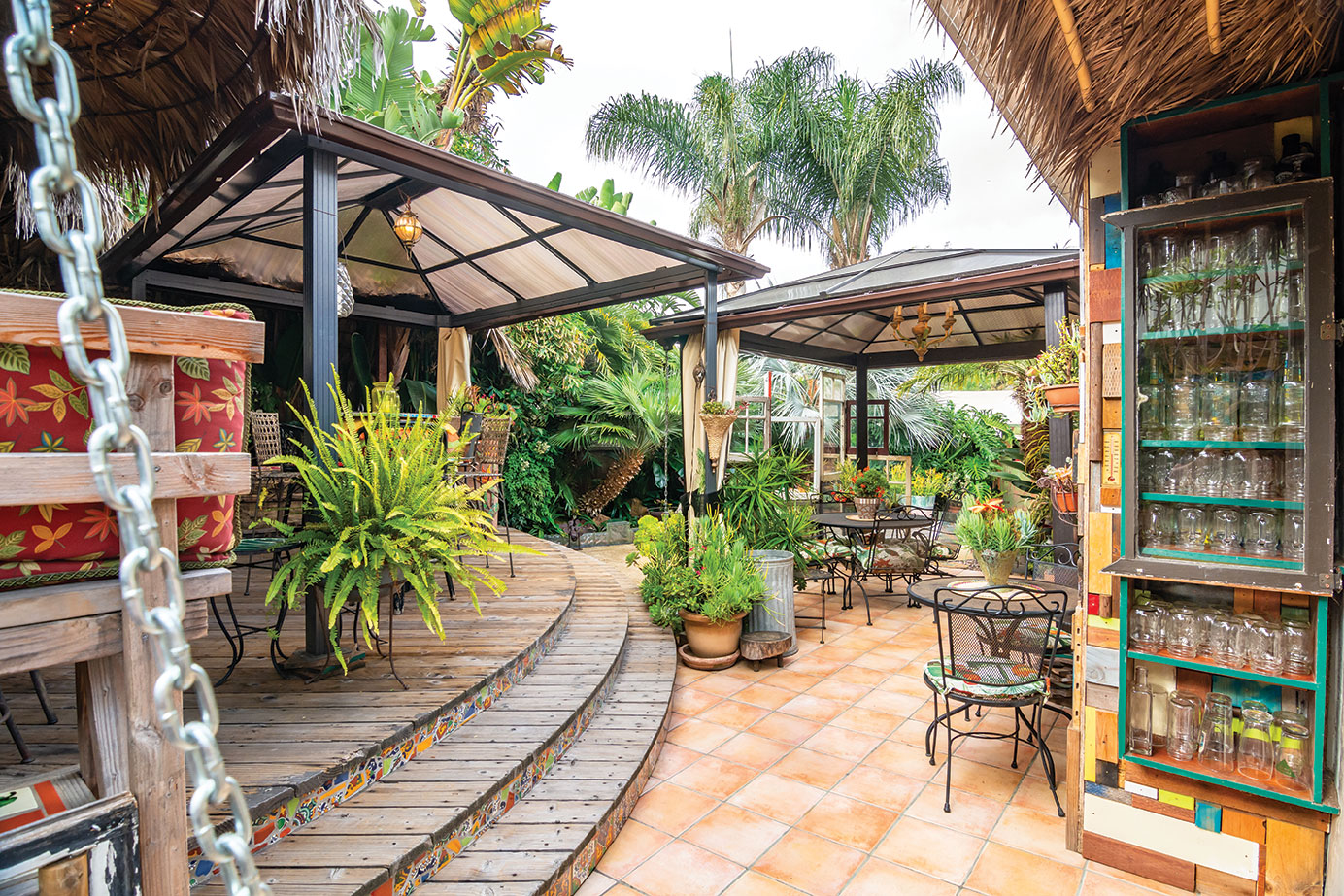 Both patios and the outdoor bar feature palapas that, Debby says, recall her childhood thatched home in Brazil. A web of rebar, leftovers from construction sites, supports palm fronds gleaned from landscape trimmings and laboriously woven together by Debby. “We’d sometimes stop at places and volunteer to trim palms, just to get the fronds,” she says with a laugh. 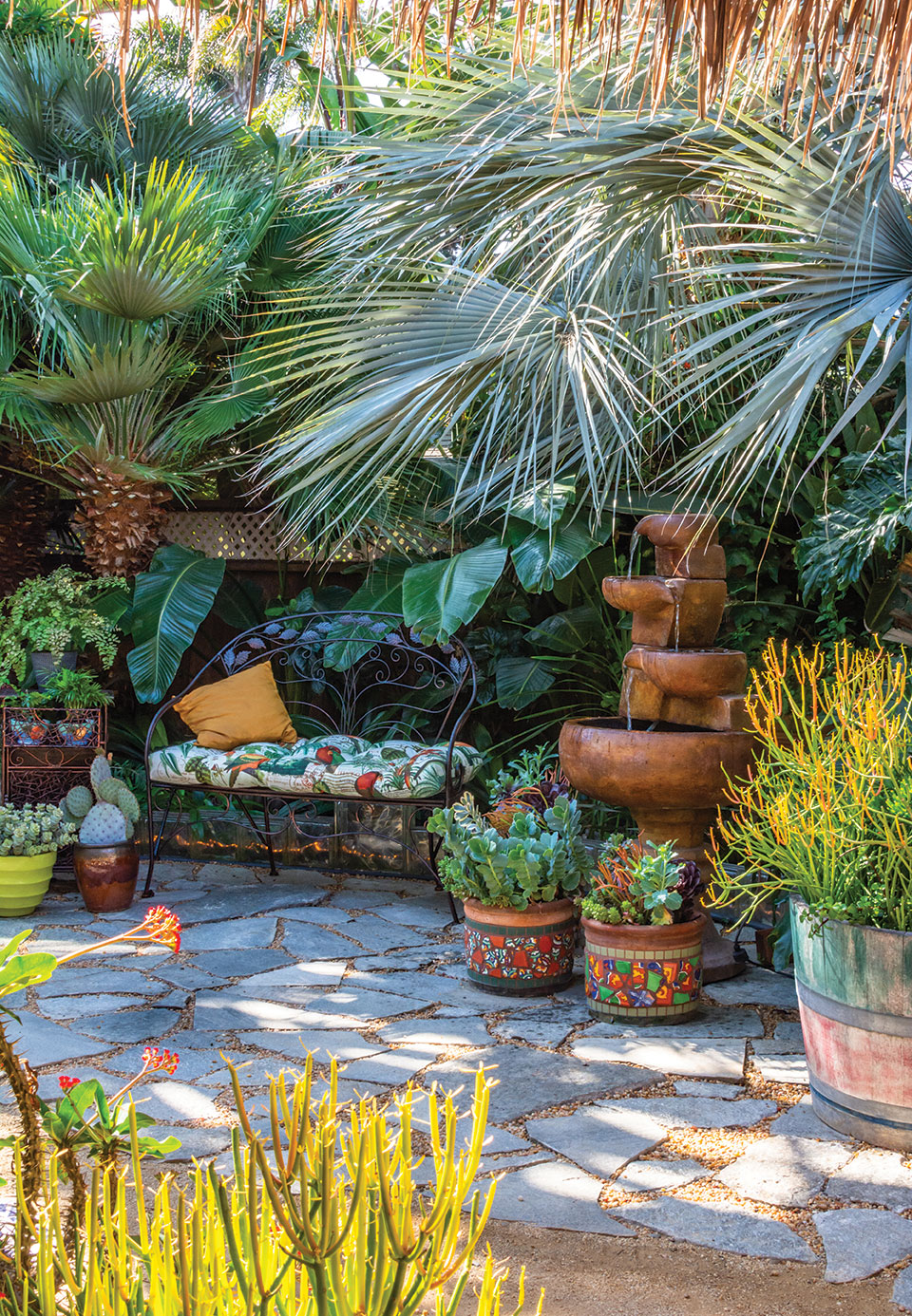 Flagstone remainders from one of Steve’s jobs were used to create a mud-free play area for grandkids. Debby decorated clay pots with mosaics.

A built-in cushioned bench at the bar fills quickly, especially when Steve tends bar or the nearby grill. More seating surrounds a trio of mosaic-topped tables, including two rimmed with colorful ruffles that flutter in the warm air from their heat-lamp bases. Another welcoming bench beckons at a broken flagstone patio backed by a broad silvery-blue Mexican palm that gleams in the soft light.

Steve’s long-standing wish for a bench in the front yard was realized when the couple removed tired turf there amid a makeover that debuted during the garden tour. “The day before, we were still working out here,” says Steve, pointing to gravel steps he hurriedly installed and plans to replace.”It’s still a work in progress.” 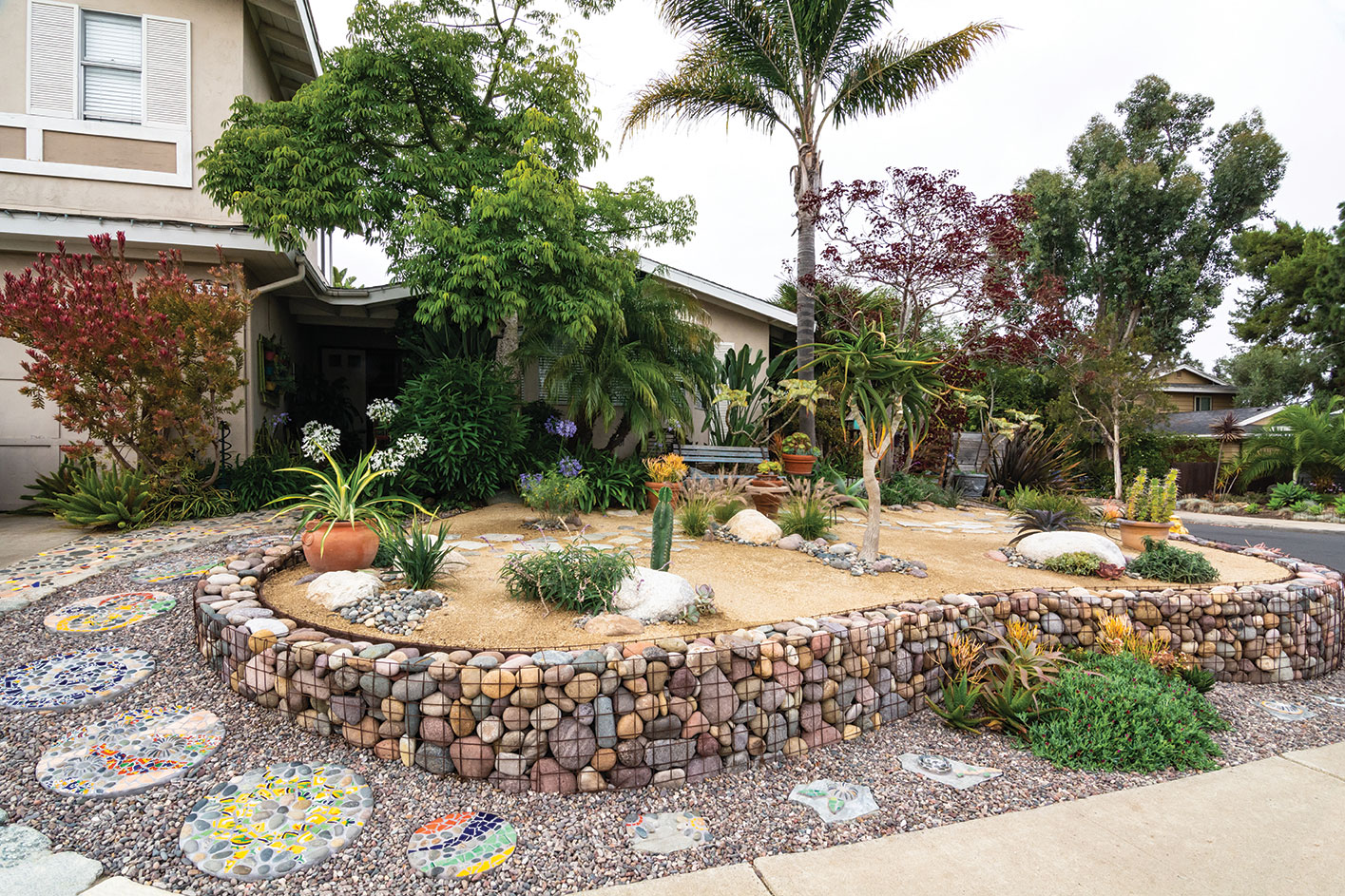 Reached by a curved flagstone path, the new bench—repurposed of course—overlooks a boulder-studded garden that mixes Mexican sages, ornamental grasses and stately agaves with specimen succulents including a Seussian tree aloe and felt bush. Behind them are foundation plants left in place, including a purple-flowered Hong Kong orchid tree, burgundy-leafed Caribbean copper plant, drifts of agapanthus and a row of mother-in-laws’ tongues Steve rescued from a bank landscape redo years ago. 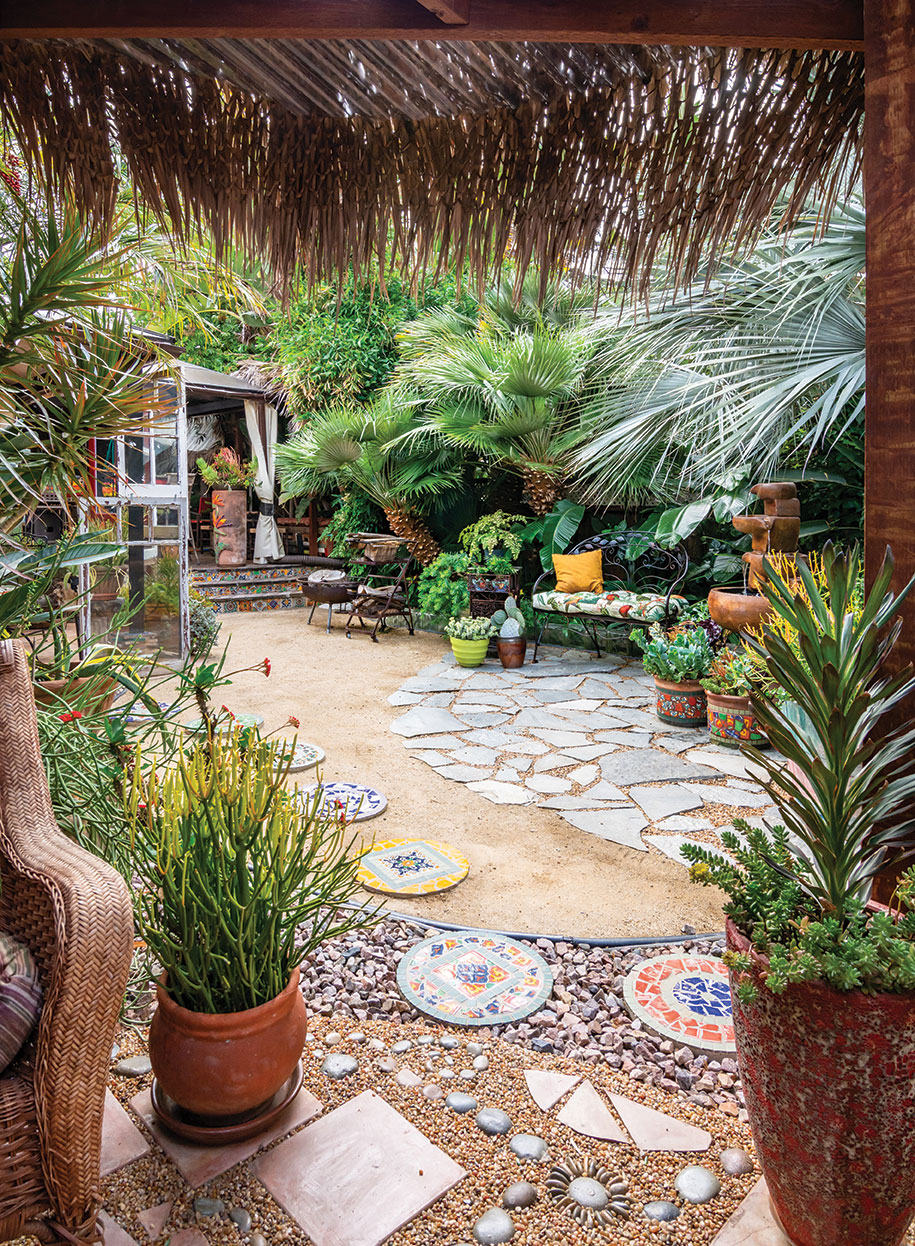 Steps from the master bedroom, paths stretch to welcoming patios and a palapa-topped deck, all secluded by mature bamboo and palms.

Instead of a standard block retaining wall, the couple opted for gabions engineered by Steve to stand tall as they gracefully meander around the corner lot. Thousands of Arizona River cobbles inside the wire cages were handpicked by the couple and meticulously arranged by Debby for a mosaic-like blend of dusky burgundy, rust and gray. More of her handiwork—large mosaic stepping stones—mark a colorful path to the front door.

Though the holidays are months away, the couple is already mulling this year’s garden surprises. “Lots of things are percolating,” Debby says. “We have to have something new to show our party peeps,” Steve adds.