7 DIY Kitchen Changes When a Remodel Has To Wait 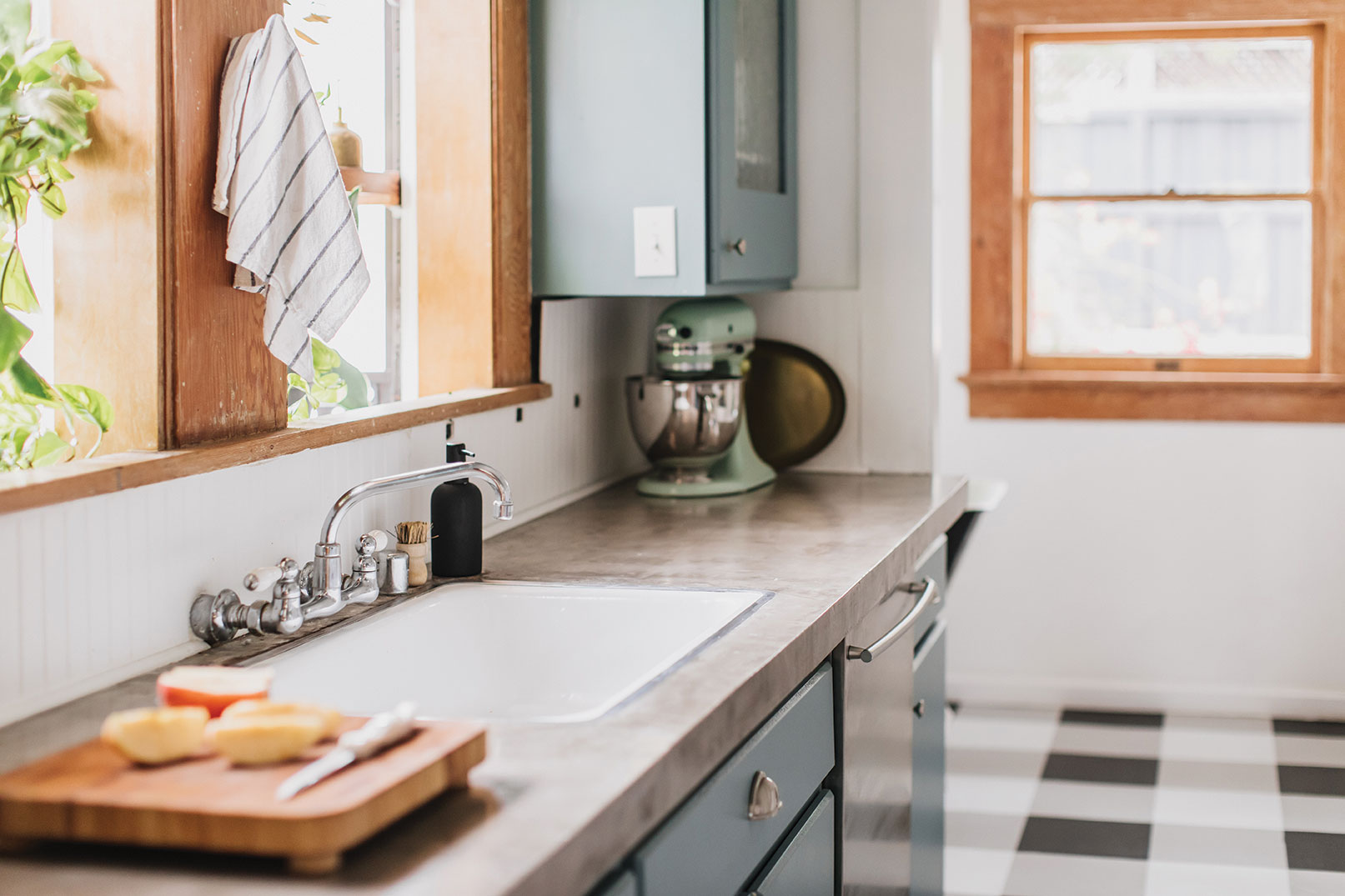 DIYer Ashley Goldman made cosmetic changes to update her kitchen, including peel-and-stick floors, a fresh coat of paint on the cabinets and walls, additional work surfaces, simplified lighting, decorative touches and more.

If you’ve ever researched a kitchen renovation, you understand that it’s no small task. You also are not surprised by Remodeling’s 2018 Cost vs. Value Report stating that the average national cost for a simple, midrange kitchen remodel is $21,198—and that this amount of money does not include changing the layout or moving electrical or plumbing fixtures. (And living in San Diego you know that $21,198 is a little short of what you’d pay here in America’s Finest City.)

These costs, a historical-house designation, and what Ashley Goldman of thegoldhive.com describes as a “lack of decision-making skills” on her part caused her and husband, Ross, to initially table the total kitchen overhaul they knew their 1915 South Park bungalow needed. Now, nearly three years after purchasing their home, financially they’re ready to renovate, but there are a new set of challenges—including long delays—in the planning, permitting, and thus, moving forward process. 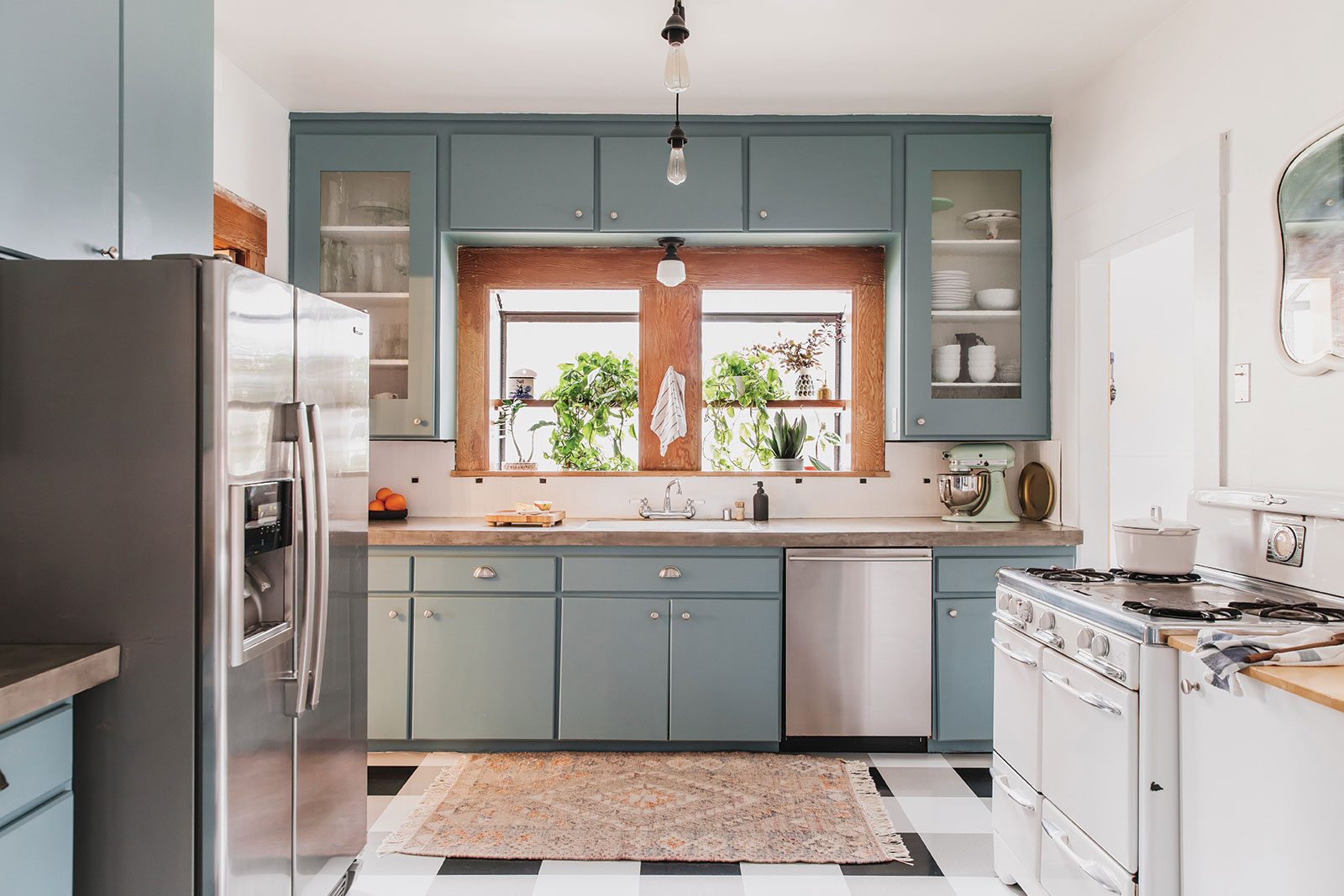 And three years would have been way too long for Ashley and Ross to live with chipped wood floors, ugly granite-tile countertops, dated lighting and no counter space. So instead of a full remodel, Ashley went the clean-it-up-and-cover-it-up route to give herself (and Ross) a place where she was happy to cook and entertain—until they could implement their long-term plans.

What she created was a welcoming space with soft colors, vintage elements, natural materials and lots of innovative projects. Here’s how she says you can do it too.

After giving the existing cabinets a thorough cleaning and adding new contact paper inside, Ashley painted them. She picked a muted blue-green hue. “It’s more color than I’m comfortable with in my forever kitchen, but this also gave me the chance to play and experiment,” she says of the retro shade. 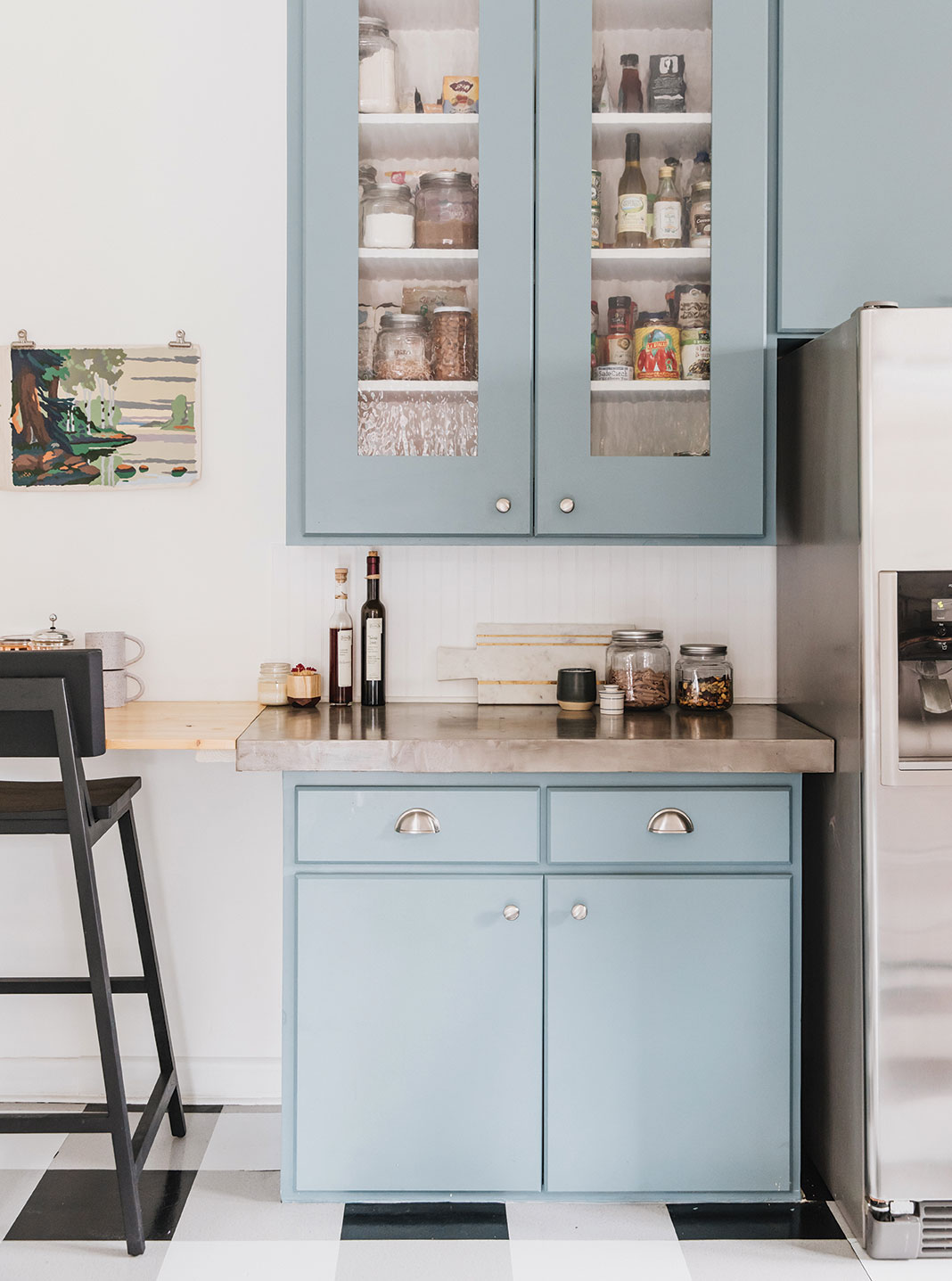 Ashley admits that she painted knowing she was going to do a full demo down the line, so she skipped the suggested deglazing step she read about online. She didn’t even take the doors off the hinges (she doesn’t recommend this method, by the way). In terms of her painting tips for you, she thinks it’s important to test colors you like before bathing a whole kitchen in it. She tried a robin’s egg blue but thought it looked a little too teal in certain light. Ashley’s happy with her cabinet color choice, but she says if she tires of it before starting her remodel, she can always repaint in a weekend.

Add concrete to the countertops.

Skim coating over the existing granite tiles provided Ashley with an easy makeover without a huge investment. The three-day, very-dusty process involved applying three thin coats of concrete to the counters and allowing time between each coat for drying and sanding. After the final coat was ready, Ashley sealed her more modern countertops with a non-toxic, food-safe polyurethane. “You definitely have to embrace imperfection if you opt for concrete,” Ashley says. After nearly three years of use, there are some minor signs of wear—
a small burn mark and a slight variation in color near the sink—but she loves the character these give her interim countertops. 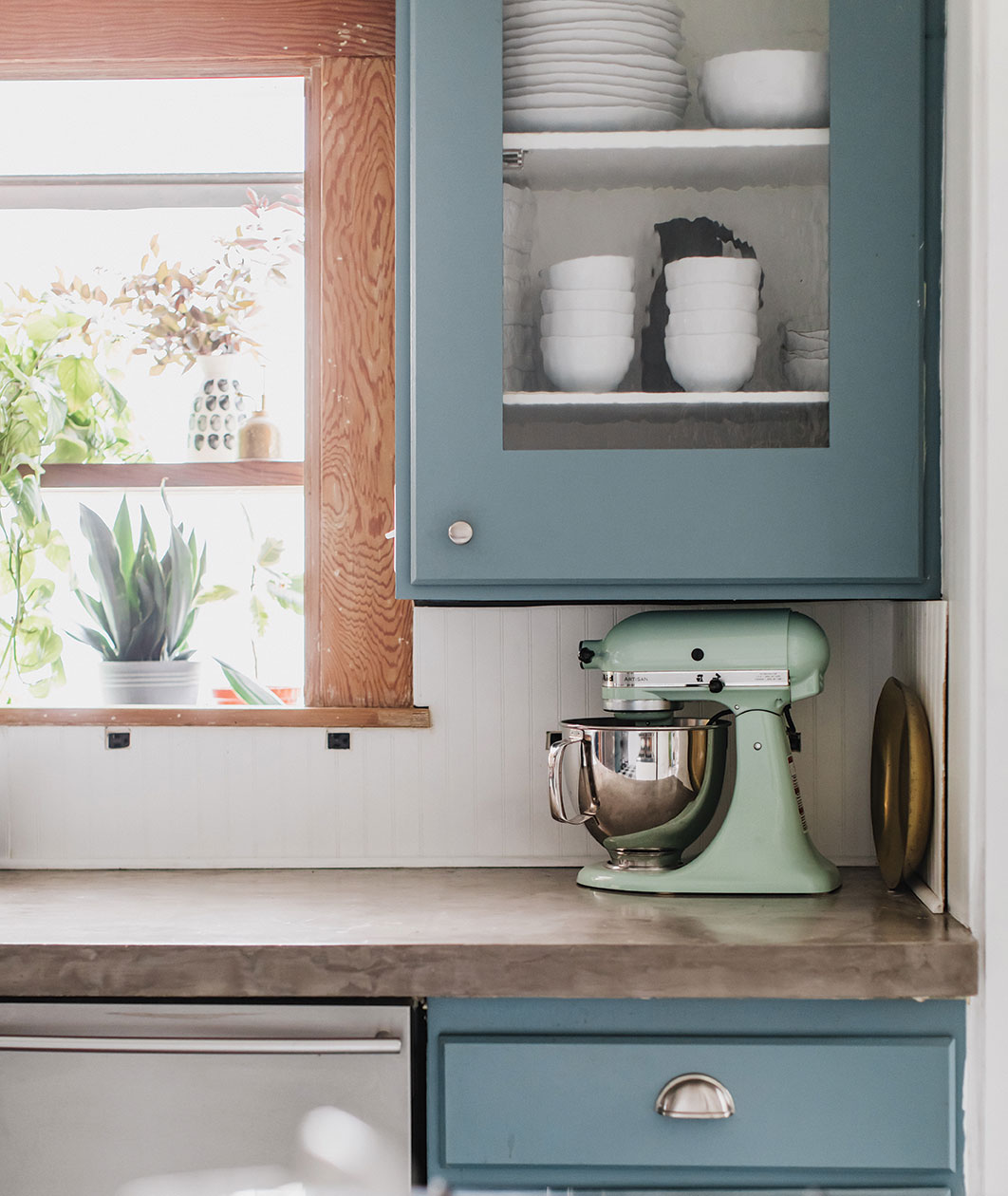 Just peel and stick the flooring.

Giant gouges and termite damage masked (unsuccessfully) with wood putty plagued Ashley’s fir kitchen floors. “I hemmed and hawed about what to do to cover up years of neglect that was essentially like putting a band-aid on the floor,” Ashley says. She opted for vinyl tiles in a graphic buffalo-check pattern that was quick, cheap, effective and super easy to install. “Floors should be really clean and well prepped because you will see texture and imperfections through the vinyl floor tiles,” she advises. “Also plan your design before you lay even one tile.” Ashley didn’t want this inexpensive remedy to look like an afterthought (even though it was) so she decided that she wanted to give the illusion of the tiles going underneath the cabinets, which required some cutting and resizing before sticking—as well as moving heavy appliances. 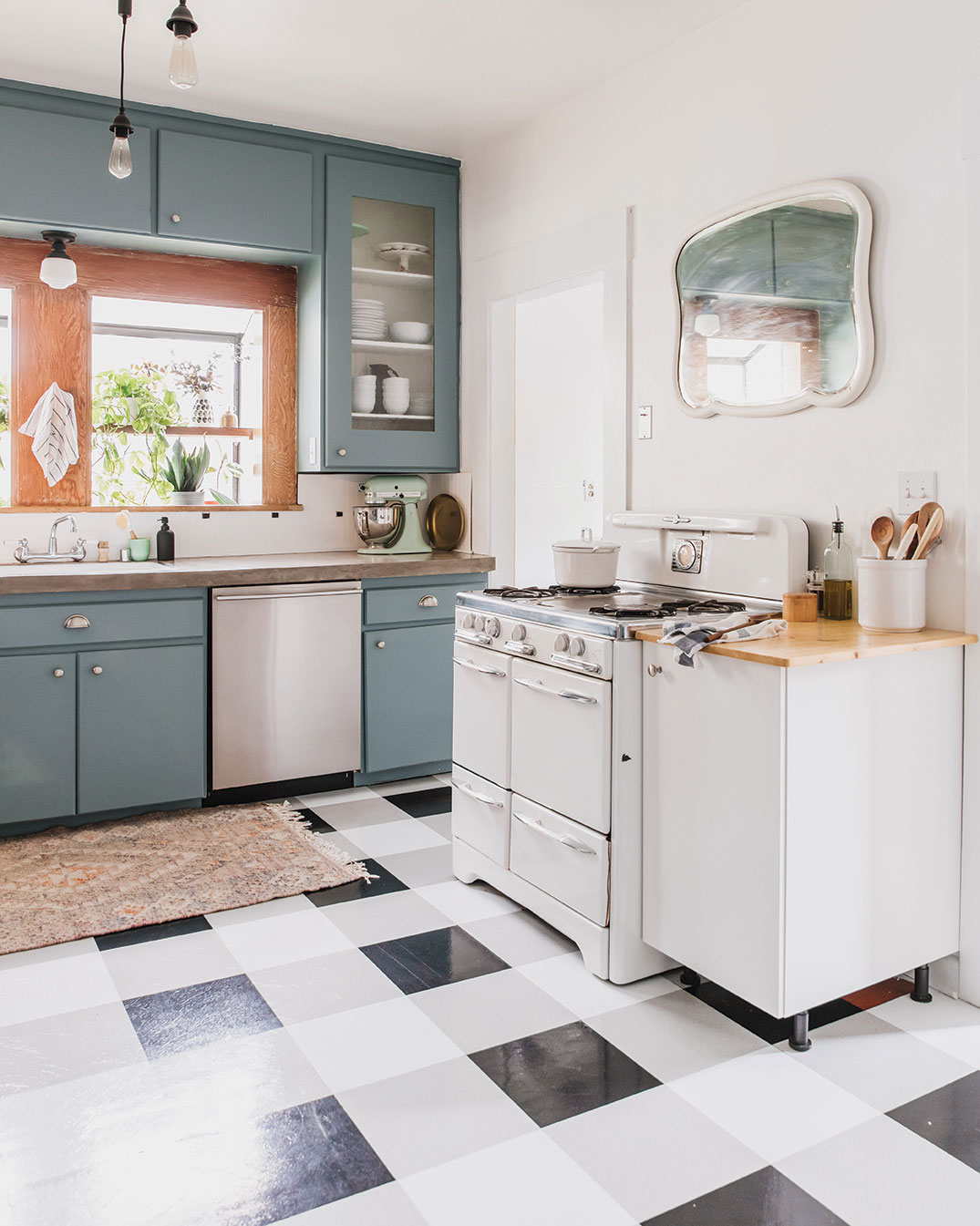 Installing the floor was pretty simple, Ashley says, though there was a fair amount of math involved in calculating dimensions so she wouldn’t end up with slivers of tile at the room’s perimeter.

Though the kitchen is roughly 300 square feet, Ashley says there was a lack of work surfaces. Purchasing an assembly-required base cabinet and pieces of lumber, Ashley fashioned a countertop-height breakfast bar with a cleat system in an unused corner and added a prep space with extra storage underneath next to the range. “I added adjustable legs to the base cabinet to give it some height and mounted it to the wall for stability,” she says. 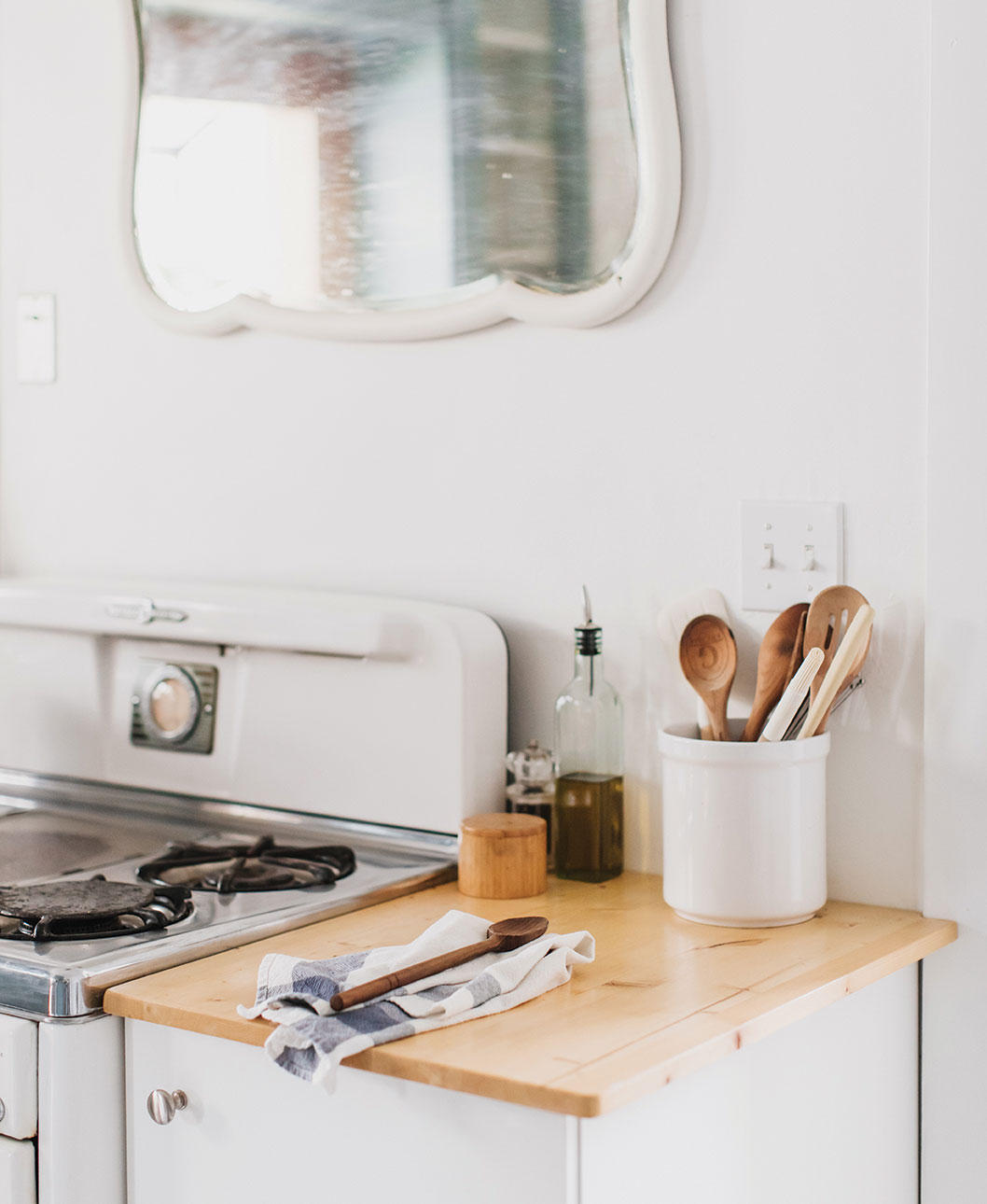 While Ross was away for work, Ashley assembled a ready-made cabinet and cut a piece of wood, which she coated with food-safe polyurethane, slightly bigger than the cabinet.

Shortly after Ashley and Ross moved in, they threw a party, but Ashley didn’t want the home to feel barren, so she printed large black-and-white photos of some of the details from their wedding and hung them on the empty walls. A photo of one of the desserts still hangs in the mudroom just off the kitchen. “I think you should decorate your kitchen just like you would any other room in your home,” she explains. “Art is such a great way to enliven a space, whether it’s a painting or photos.” Ashley also buys utilitarian things that she likes to look at and doesn’t mind having displayed on the countertops like bamboo jars, copper canisters, wood nesting bowls and sculptural oil-and-vinegar decanters. 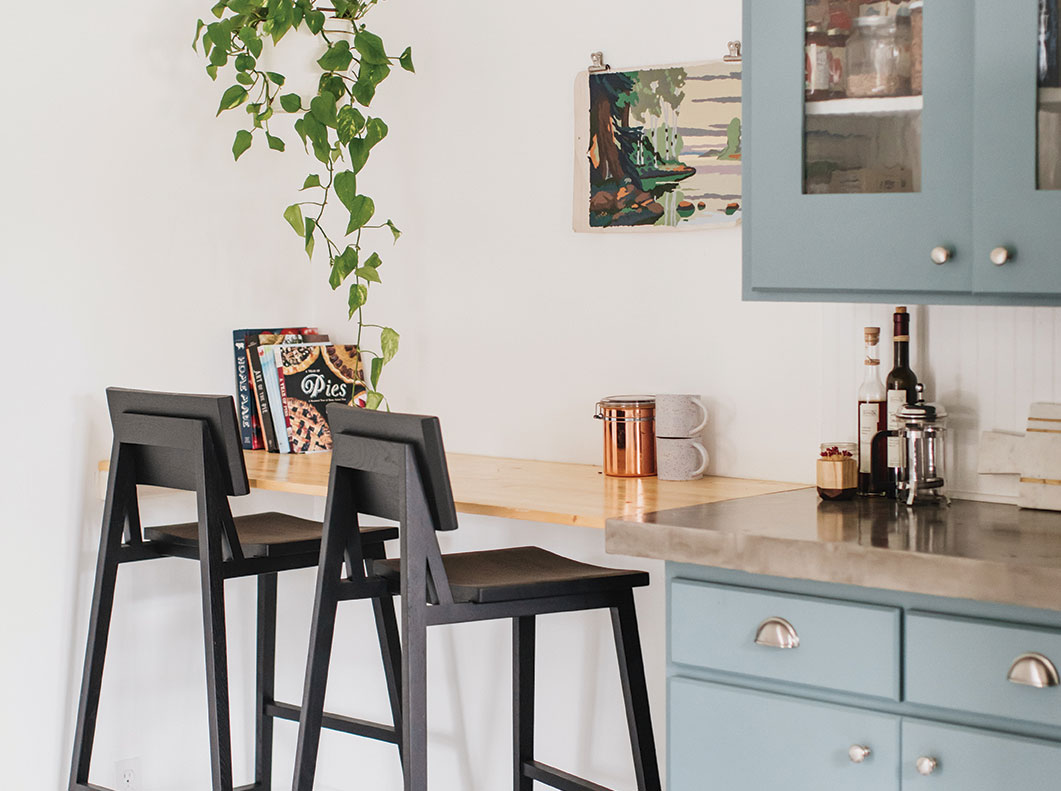 Ashley also made a bar-height countertop to replace an unused cafe table and chairs.

The track lighting hanging in the middle of the kitchen was dated. Instead of swapping it, Ashley removed the amber shades, painted the cords black and replaced the lights with Edison bulbs. Above the sink, she swapped the light with a glass fixture that has a more retro vibe to it. 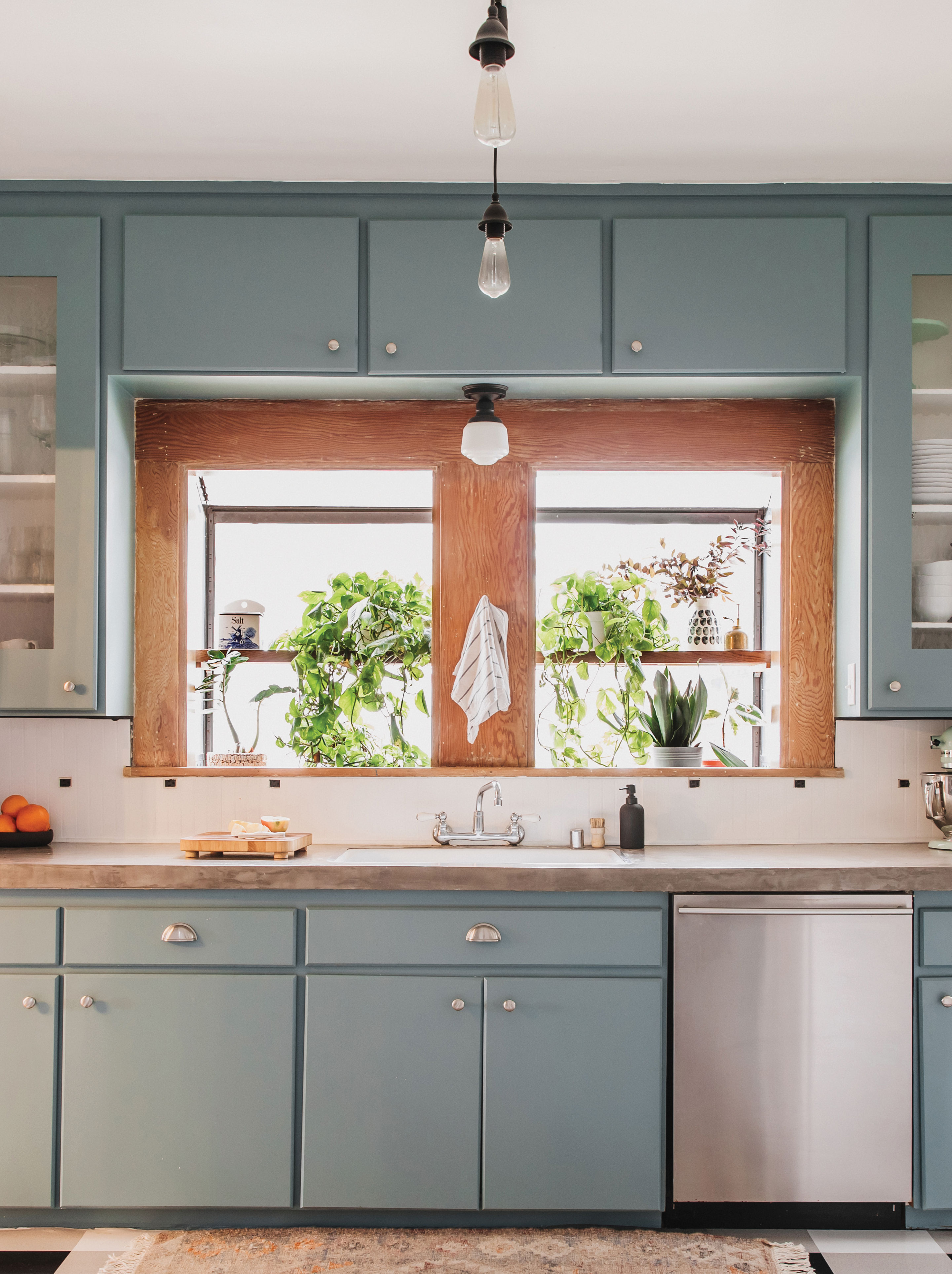 Make dream purchases when you see them.

The kitchen in Ashley’s dreams includes an O’Keefe & Merritt gas stove, so when she spotted one on the last day of a local estate sale for $100, she snagged it. “It looks beautiful from all angles, and it’s built like a tank; it will last forever,” she says. She suggests searching eBay or Craigslist if you long to cook with one of these vintage beauties. 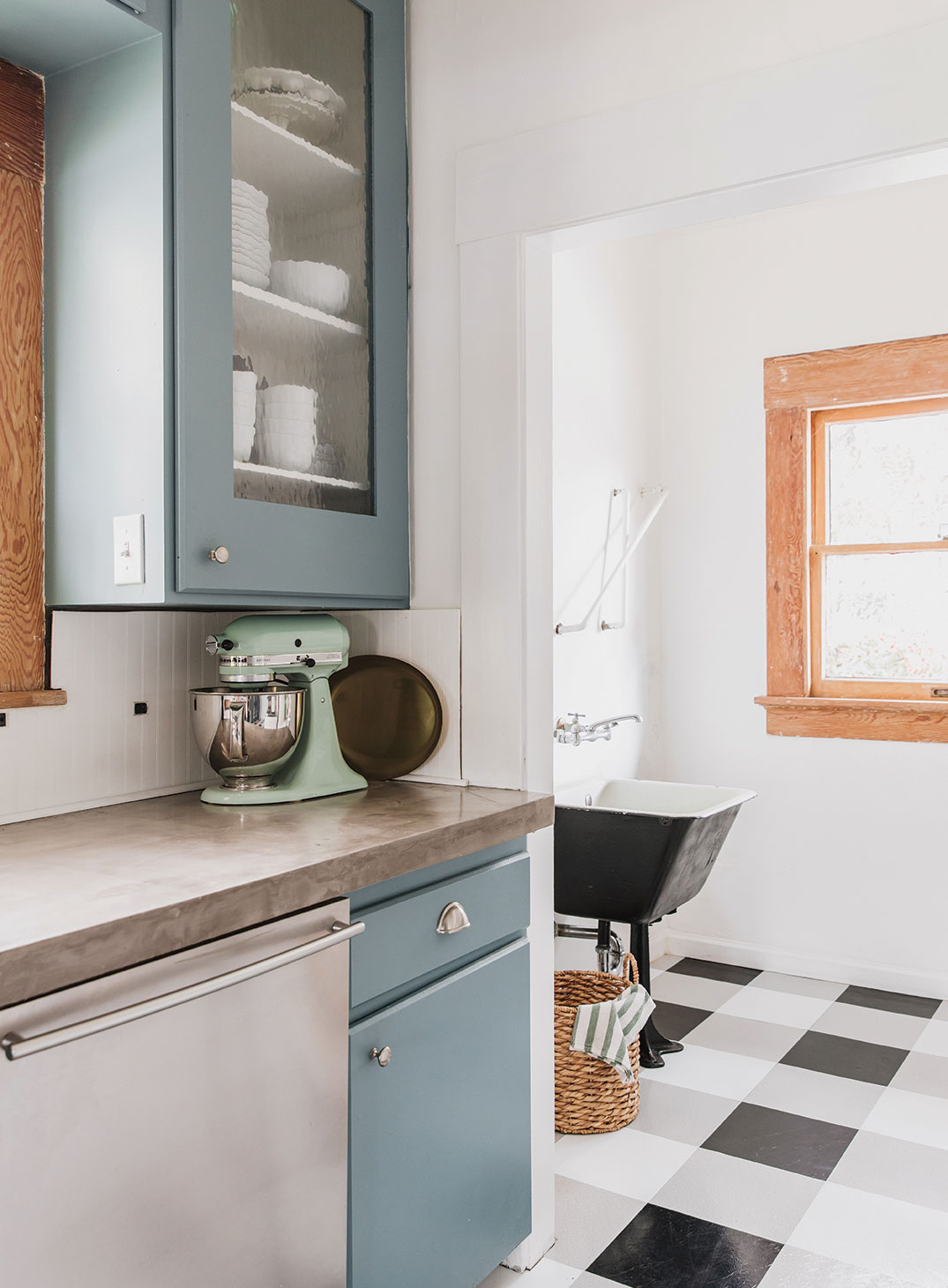 The flooring continues into the adjacent utility room with a retro schoolhouse sink.

Categories: Home Design, Tricks of the trade
Share this...