A Garden’s Something From Nothing 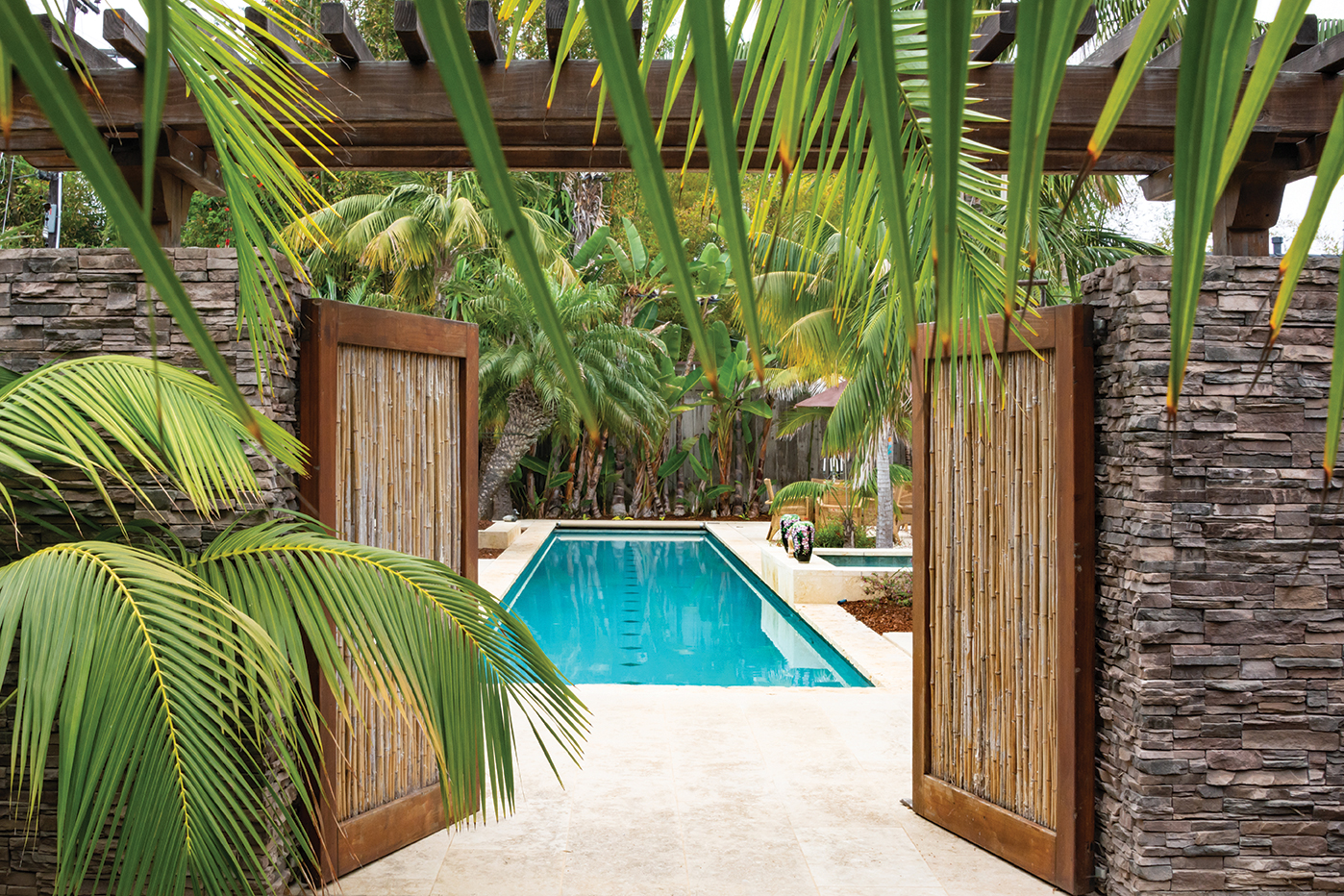 Kentia palm fronds fringe bamboo pole gates, supported by stacked stone pillars and leading to the lap pool. It’s all topped by an Asian-style arbor that echoes similar accents found throughout the home and garden.

Neighbors nicknamed the property “Burt’s Dirt.” But attorney Michael Goldstein saw potential in the barren Leucadia lot where a retired fireman (named Burt) lived in a spare duplex with views across the laid-back beach town to the Pacific. In the early 1980s, when the dusty acre came up for auction in a probate sale, he convinced his wife Linda to bid. 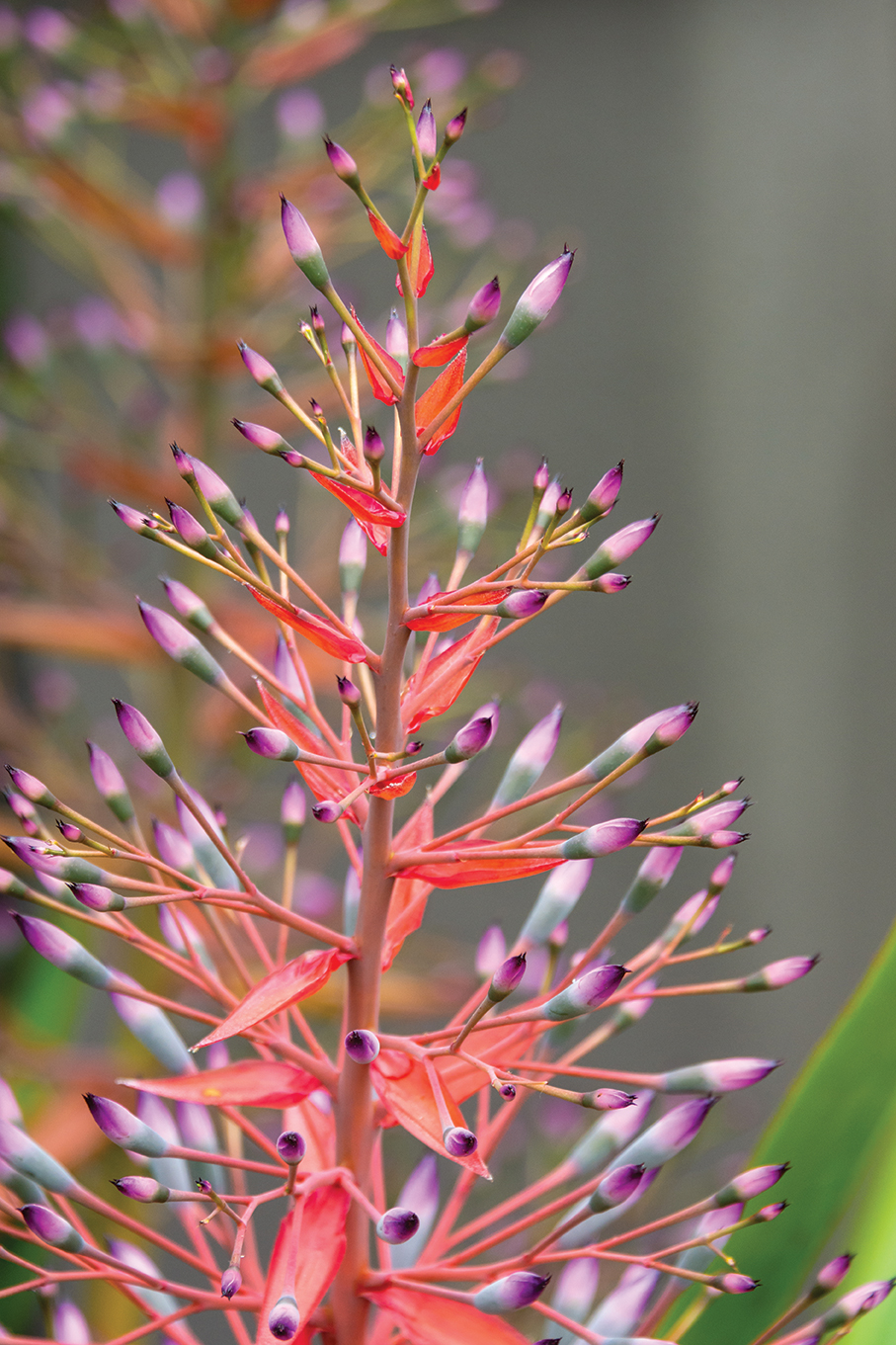 “We were just starting out and didn’t have a lot of money. So we agonized over the amount,” Linda recalls. “Turned out we were the only bidders. ‘Burt’s Dirt’ was ours.”

In the decades since, the hands-on couple worked slowly but steadily to transform the narrow lot into a stylish compound that friends often compare to a tropical resort. “We made changes as we could, little by little,” says Linda, who drew on a can-do attitude instilled by her single-parent mother.

The former teacher and school administrator also spearheaded creation of the palm-studded landscape that evolved to reflect a growing commitment to water conservation. “I’ve become obsessed with water,” Linda says. “I have a spiritual side and believe that we all must care for each other and the Earth.”

After their purchase in 1983, the couple’s first task was a budget-minded redo of the duplex into a two-story home with midcentury modern and Asian influences. “Michael gutted the building, filling four industrial-size dumpsters before we called a contractor in,” Linda says. Grading shaped the sloped front yard for a brick patio and lawn where the East Coast natives envisioned weekend parties with croquet and other games. “I remember how happy I was the day the dirt driveway was finally covered with asphalt,” she adds with a laugh. 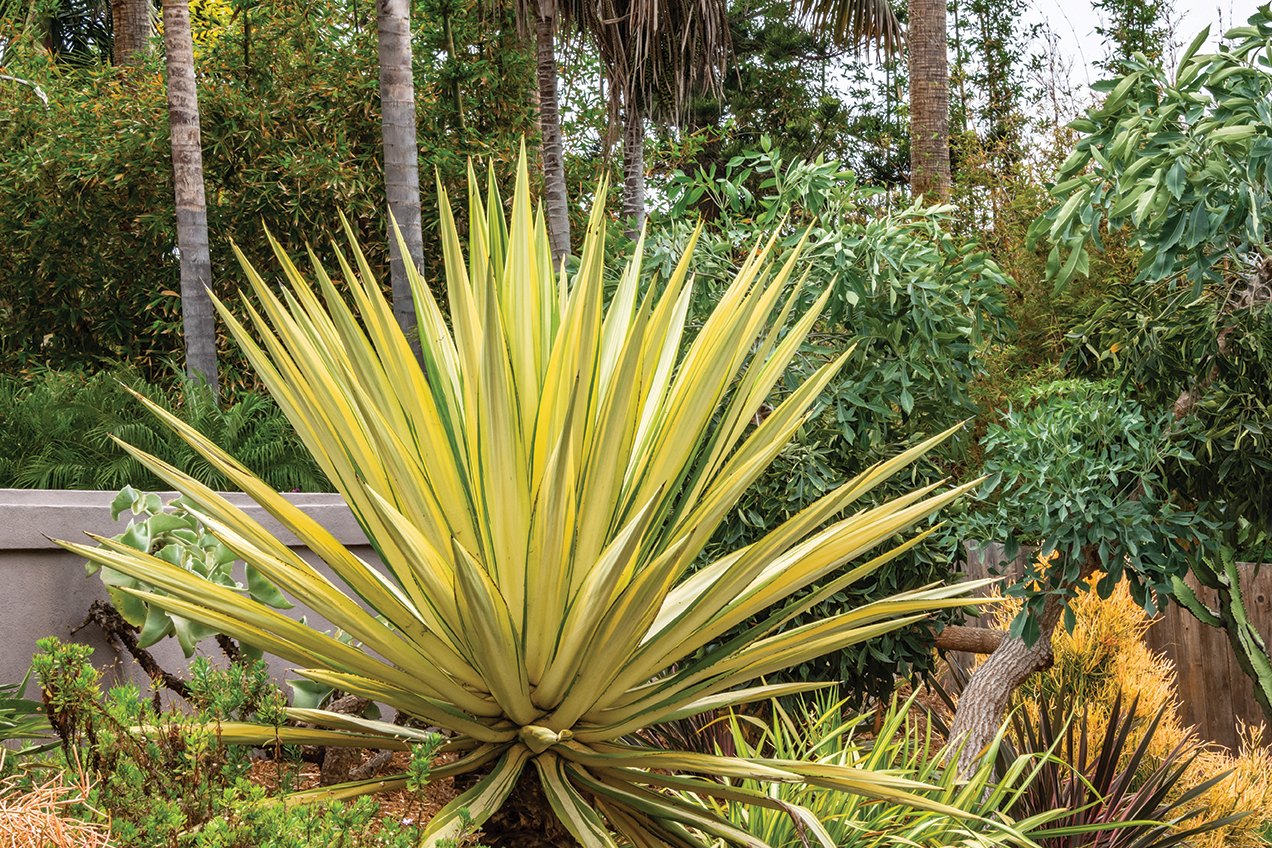 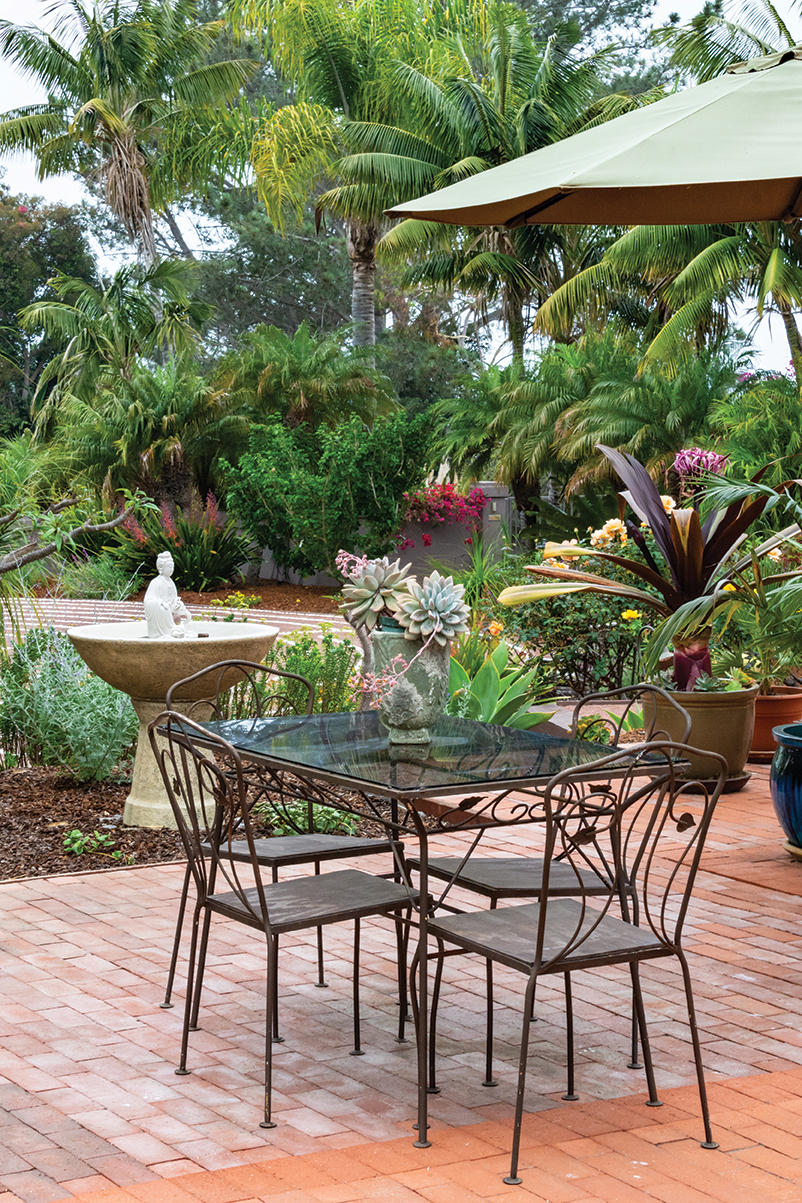 A canopy of palms, many planted by the couple during their 36 years in residence, secludes the property.

Vacations to tropical destinations and Michael’s childhood in Miami inspired initial landscaping to frame the home’s sparkling seascape. Linda traded a rare cycad growing on the property with a plant collector for a half-dozen kentia palms, the first ones she planted along the south property line. “The kentias were so small they made no difference in the landscape,” she recalls. “That made me realize what it was going to take to create a garden here.”

Now 20 feet tall, those palms today sway near a layered canopy with more kentias, pygmy date and towering fan palms. Below them, lush flowering shrubs and several unusual cycads thrive in the rich soil of the former avocado grove. Nearby is a small rose garden, pared over the years from 25 to eight carefree favorites, including ‘Double Delight,’ ‘Nancy Reagan’ and “Midas Touch.’

The backyard remained “manicured dirt” until 2001, Linda says, when the couple was ready to install the turquoise lap pool and spa that Michael, a former triathlete, always wanted. A new patio of limestone pavers stretches back from the main residence to the remodeled garage and a second dwelling added in 2007 that serves as Michael’s office, guest quarters and pool cabana. Here and around the grounds, bamboo pole fencing, Buddha statues, soft wind chimes, hanging lanterns and glinting mirrors accent the serene scene. 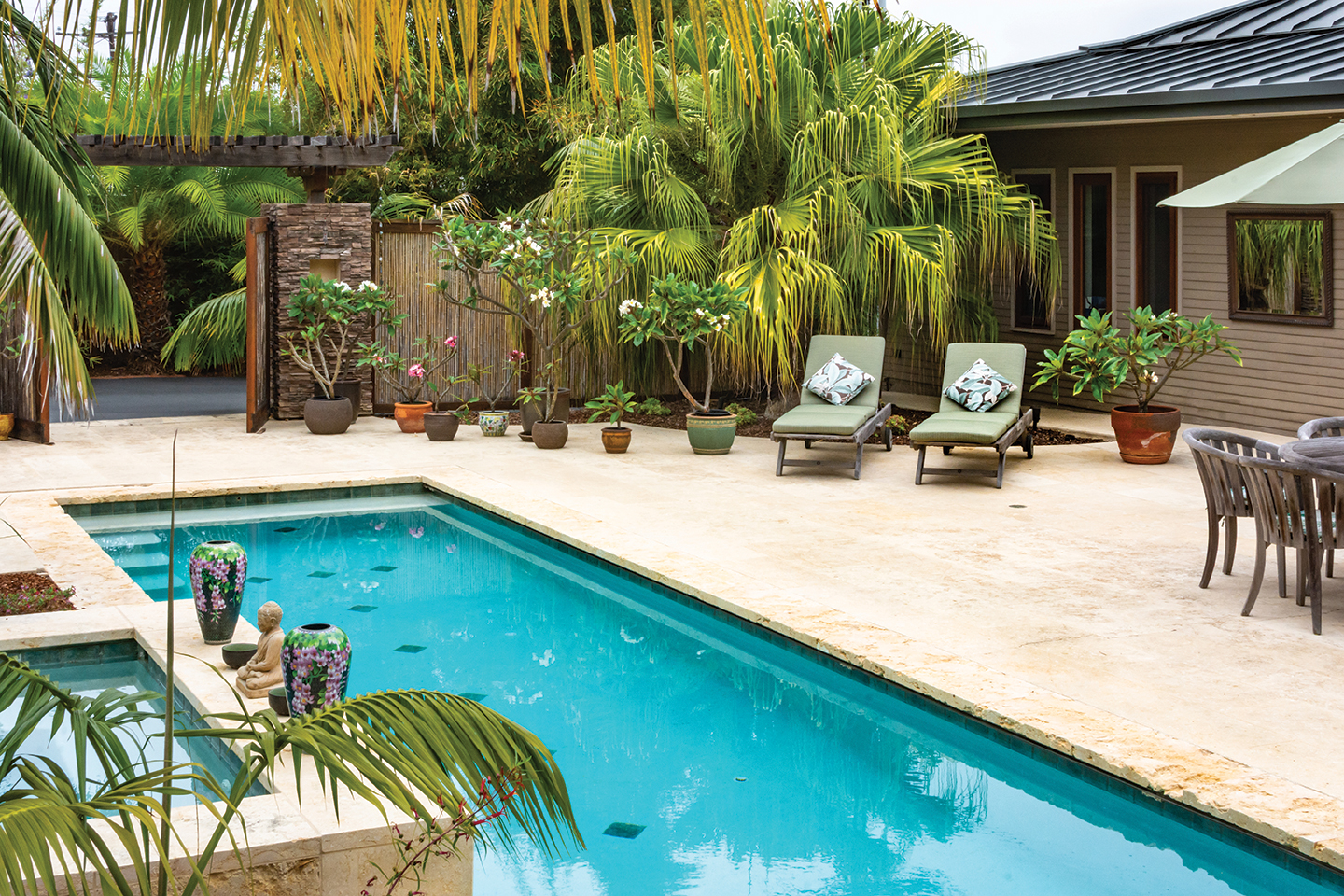 A Chinese fan palm and chaises add resort style to this favorite spot.

Two 30-year-old plumeria shrubs served as mother plants for the dozen pink-and-white flowered potted plumerias that perfume this sheltered patio. Beds around the edges hold showy gingers, crinum and regal lilies, and birds of paradise shaded by unusual palms Linda discovered as a Palm Society of Southern California member.
Umbrella-topped tables and a fire pit here are the couple’s favorite spots for lunch and gatherings with friends. 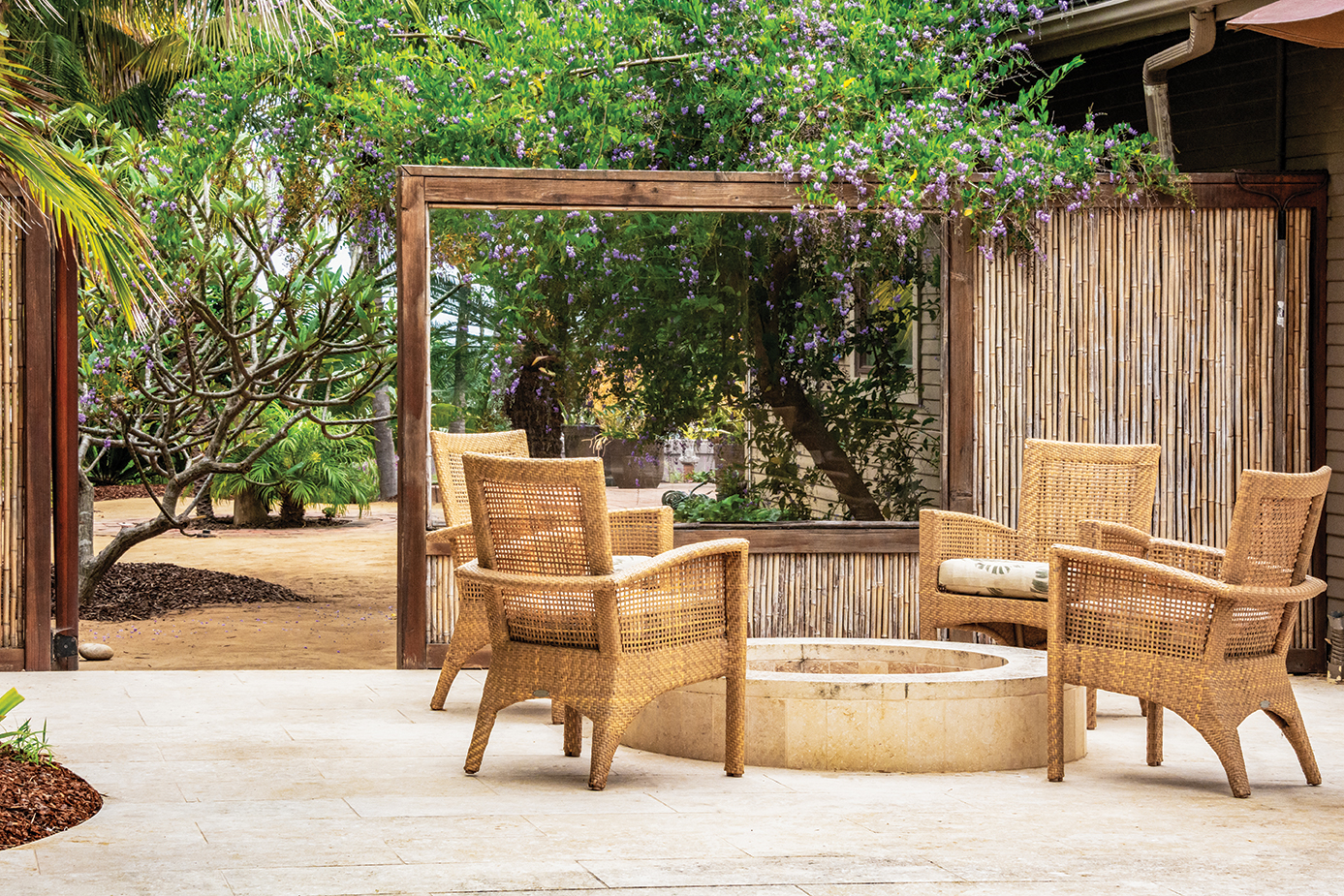 A gas fire ring inside the back patio of Linda and Michael’s Leucadia compound warms visitors. They also enjoy the view through a “picture window” into a side yard where fragrant plumeria and a purple sky flower bloom

The property’s most recent addition is a classic labyrinth that wends through the former front lawn. “For years, after I read an article about them, I wanted a labyrinth,” Linda says. “In 2000, I took a trip with some girlfriends to walk the labyrinth at Grace Cathedral in San Francisco. That really got me going on it.” 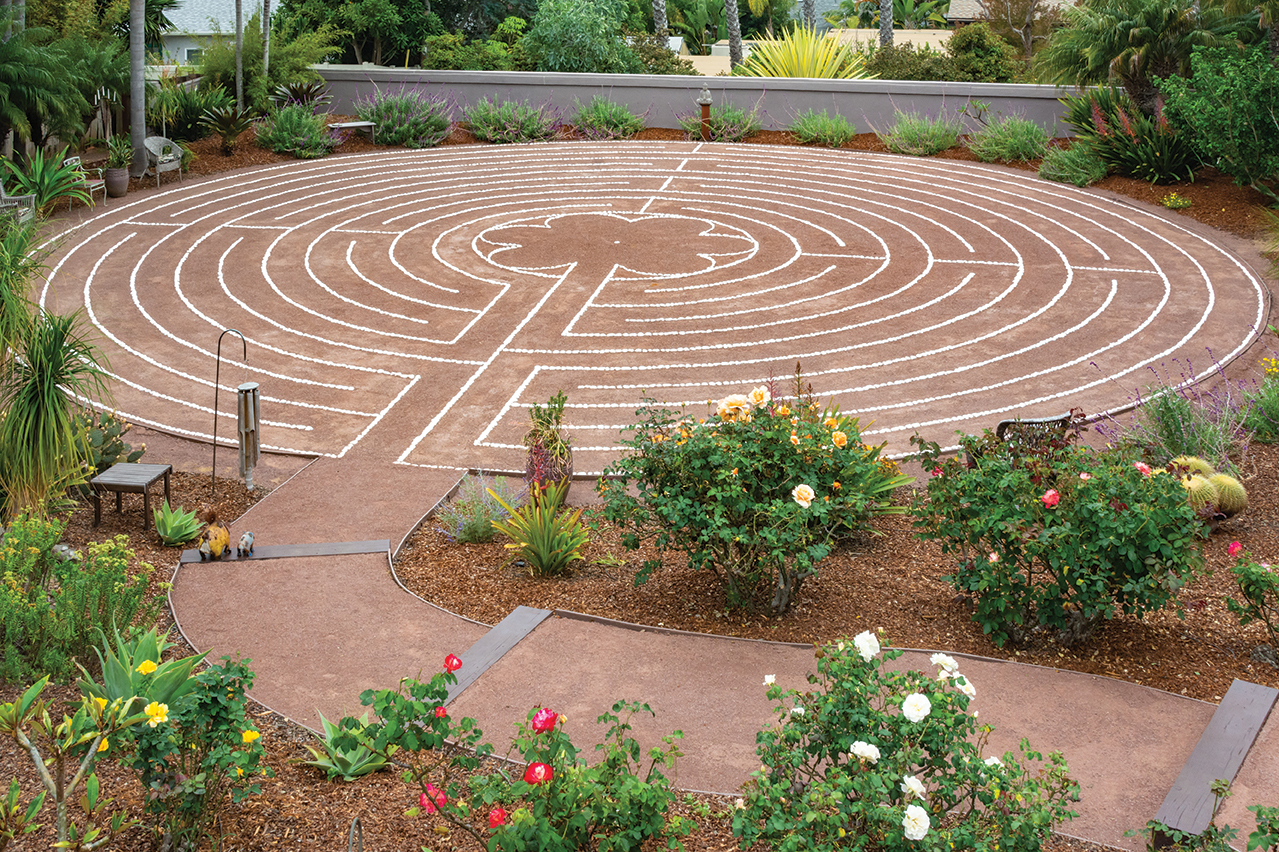 A labyrinth with decomposed granite paths replaced a lawn in the ocean-view garden. The meditative space, reached by gentle stairs through a rose garden, is based on a French design.

Recurring drought turned the couple’s attention to their thirsty turf, and in 2011 grass gave way to a labyrinth laid out by Michael and installer Erich Holmes after a 12-circuit design at France’s Chartres Cathedral. Deep-brown decomposed-granite paths edged with tumbled marble stones that gleam like pearls foster “contemplation and meditation,” Linda says. “There’s only one way in and one way out of a labyrinth, but along the way you change directions. Just like life.” 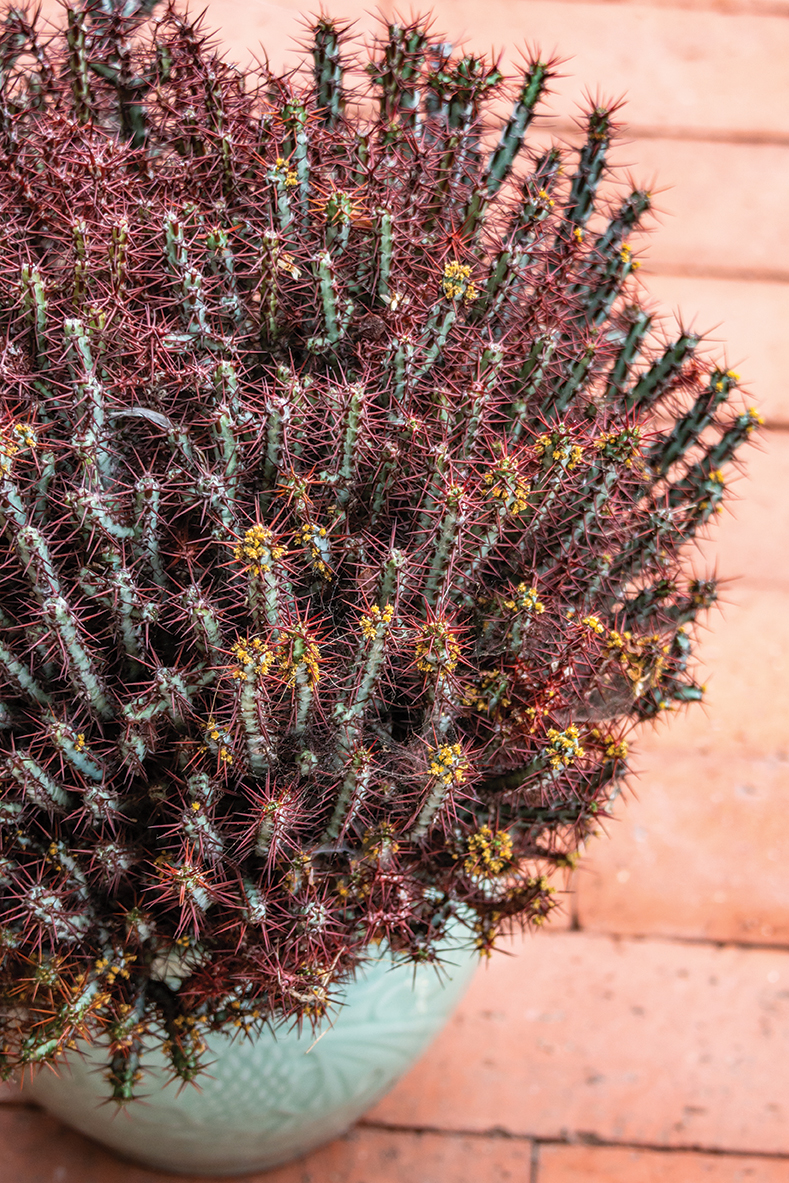 With the lawn gone, water bills plummeted, Linda notes. More water savings come from drip and gray-water irrigation and extensive rainwater collection in more than 50 barrels around the property, each with a 32-gallon capacity. In addition, rain chains channel a surprising amount of condensation from the compound’s metal roofs into buckets for watering container plants.

Four years ago, the couple completed their last major project, a remodel to update and weatherproof the main residence. Free to savor their nature-filled oasis, Linda watches hummingbirds from her office window, paints portraits of resident praying mantises and collects abandoned bird nests she displays like art.

“We love living here and are happy to be the current caretakers,” she says. “And someday, when others take our place, we hope they will enjoy the labyrinth, plants, birds and butterflies as much as we do.” 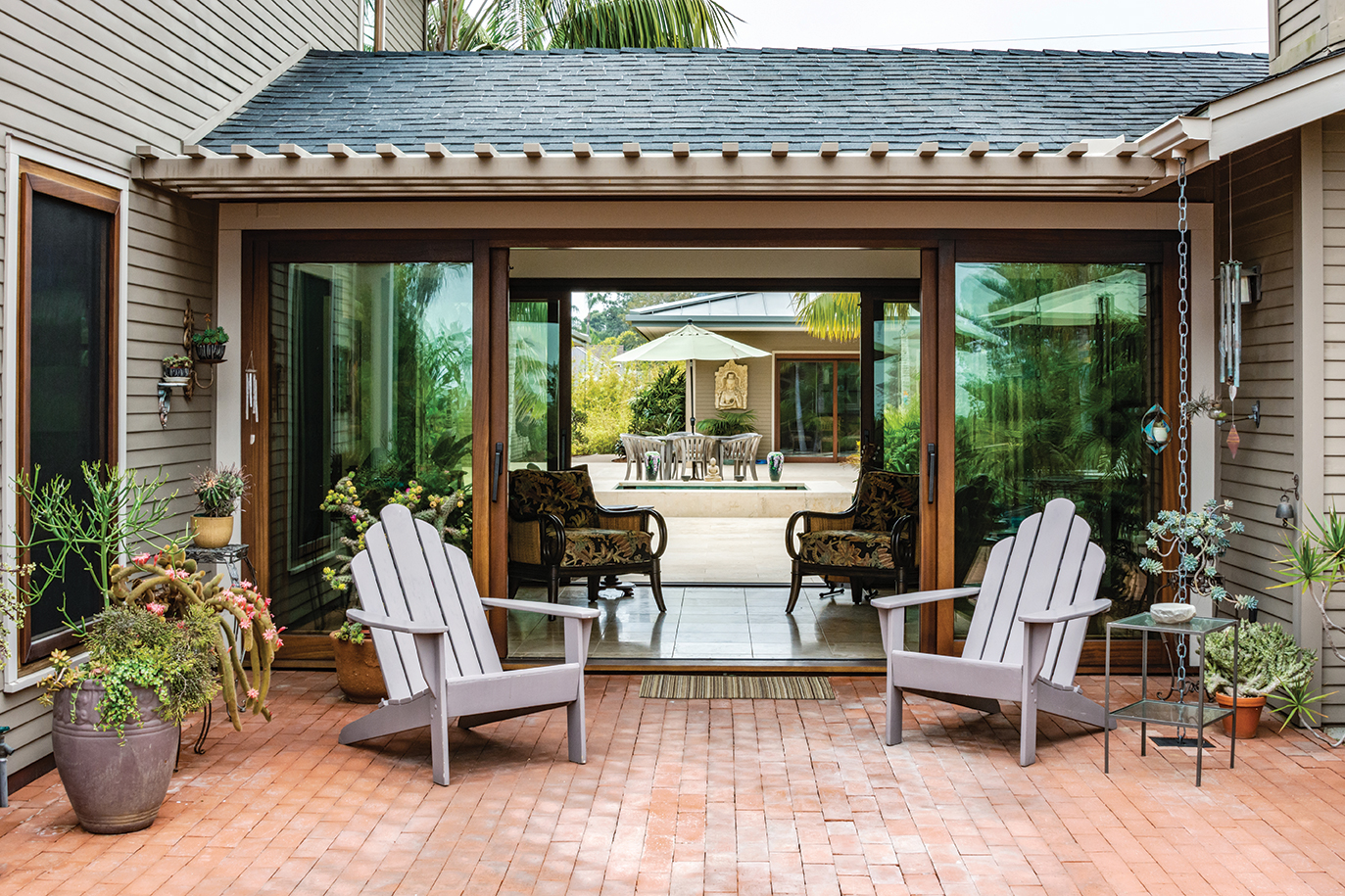 Adirondack chairs beckon on a patio outside a breezeway.