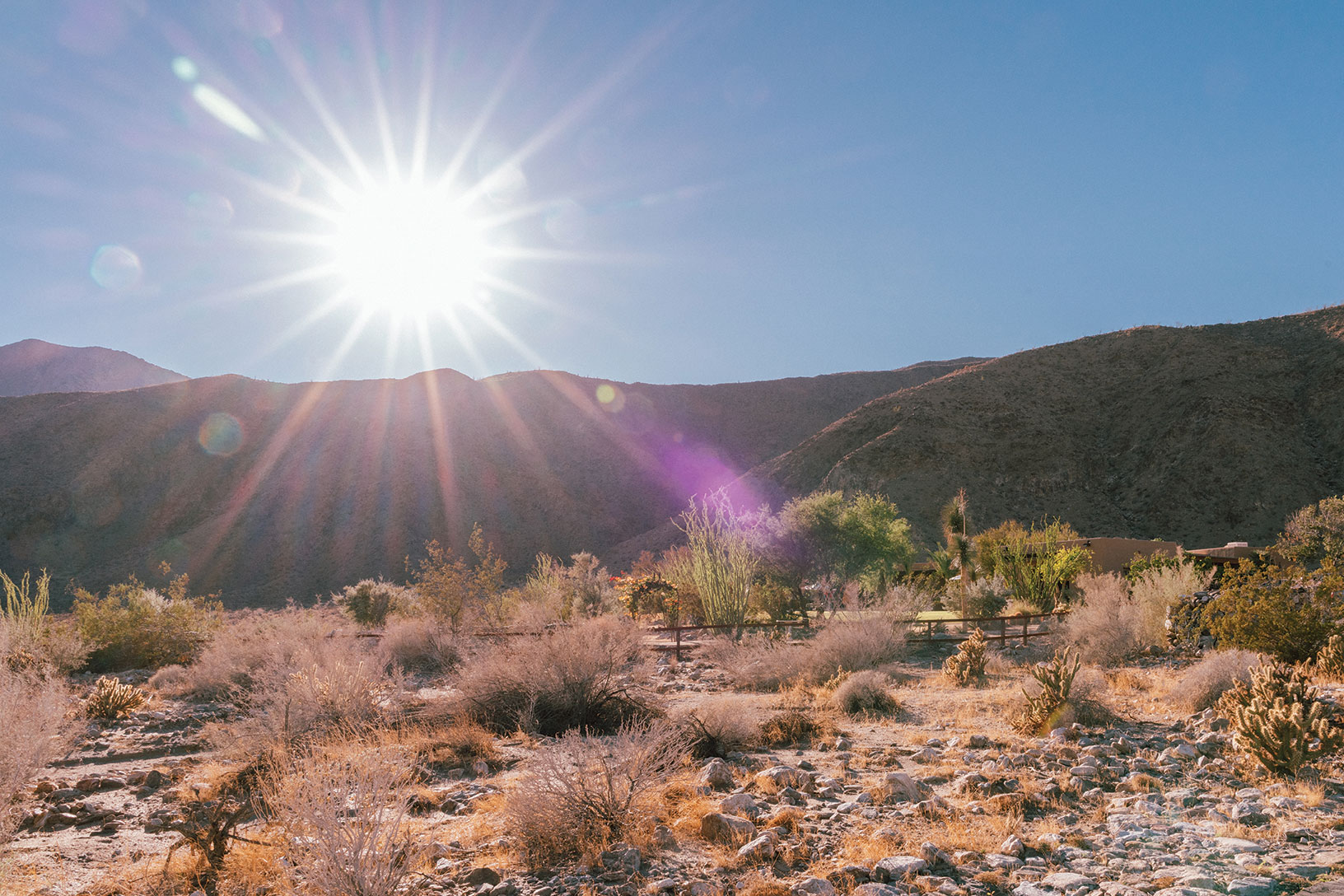 Designer Melissa Young and her husband Dean Loring love the peace of Anza Borrego Desert (seen from their backyard) that “restores your soul,” says Melissa. Photography by Tim Melideo.

The bighorn sheep don’t notice that the 5,000-square-foot, Santa Fe-style estate at the foot of their Anza-Borrego Desert Park mountain is, after three years of standing empty, once again occupied. Nor do they care that the adobe hacienda and its accompanying casita were designed by well-known New Mexico architect Richard Grenfell and once owned by Dennis Avery, heir to the Avery label company. Nonchalant, they still wander through its 30 acres, looking for grazing material. 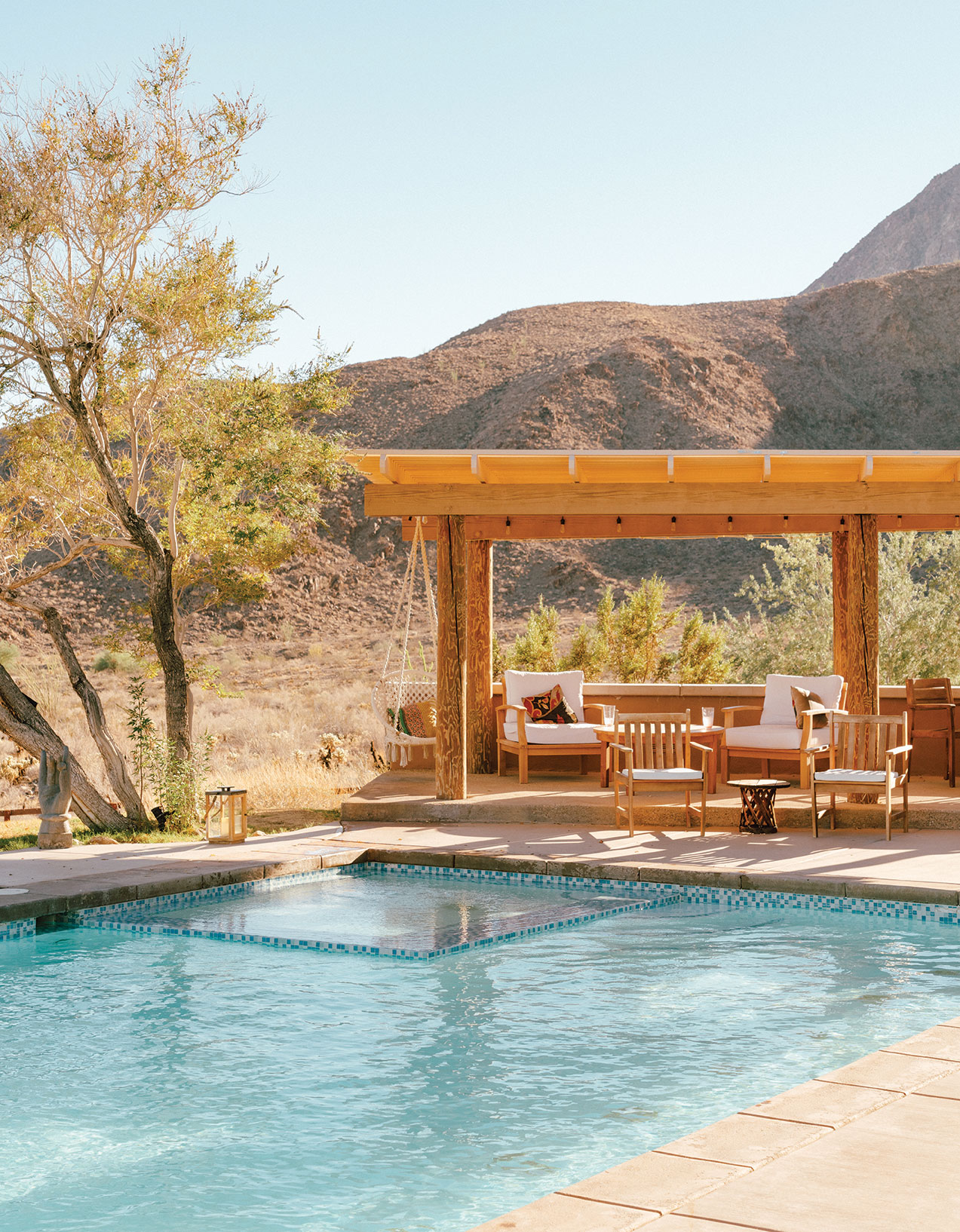 “This is the real desert—anti Palm Springs,” homeowner Dean Loring says. “Here, it’s the natural environment—untamed, wild—not pretend wild.” If the bighorn sheep aren’t proof enough, the snake fence surrounding the property to keep the rattlers out might be.

A restaurant-quality kitchen for the Burger Lounge pair

It’s 9:30 in the morning. Dean’s chopping veggies in the cozy kitchen. He dumps them into a big vat of soup, warming on a hardworking restaurant-quality Viking range. The made-with-love broth, creamy and lush, is mainly for his father, whom Dean flew in to come live at the house after doctors pronounced he had just a few weeks to live. That was more than a year ago. Surrounded by his family, his two excitable chihuahuas and a 24-7 caregiver, dad has no reason to go to heaven. He is already there. 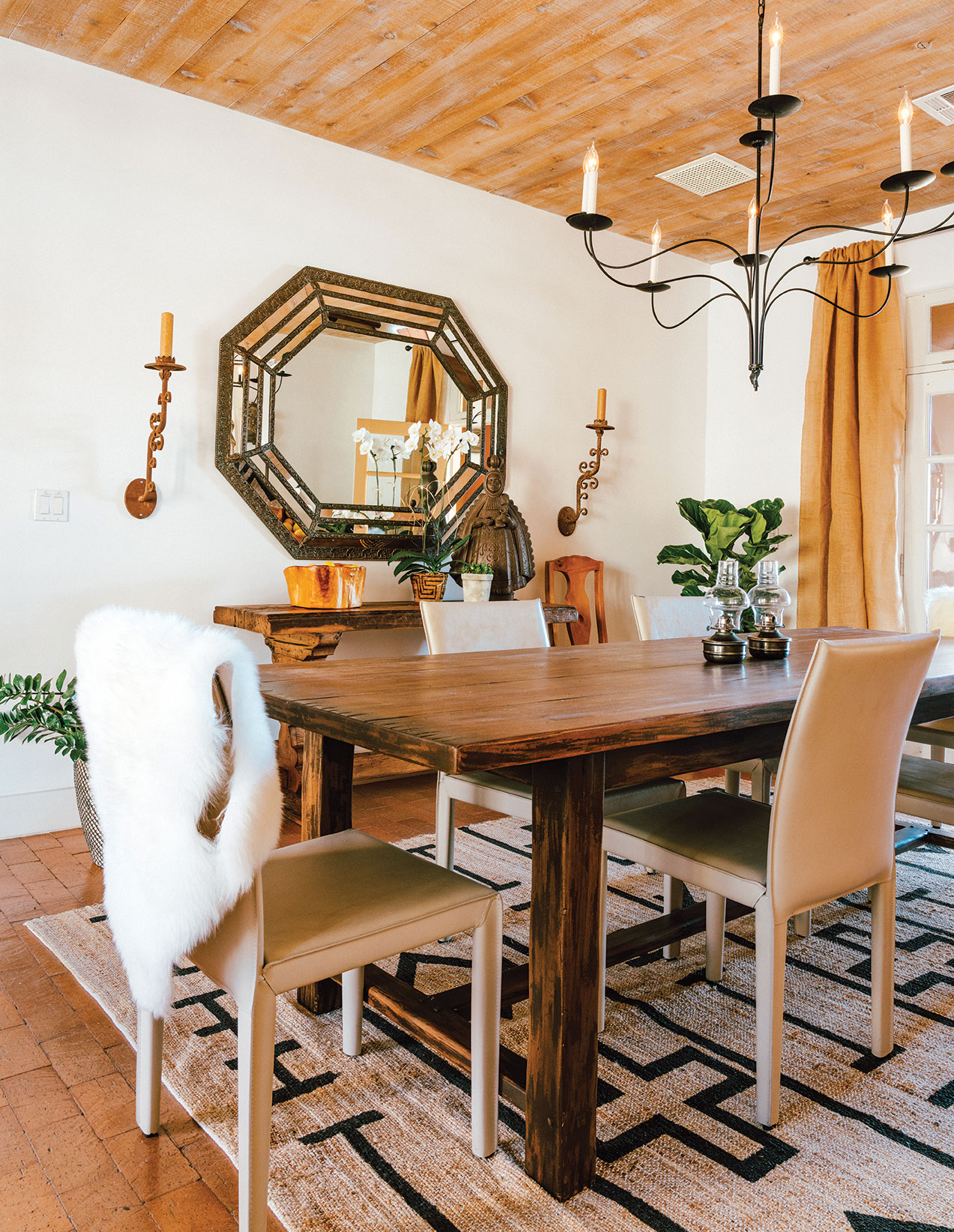 Dean stirs the soup. He cups his hand under a wooden spoon filled with the homey liquid. “Here, taste this,” he says to his wife Melissa Young. Tall, slim and blonde, Melissa looks more like a fashion model than a restaurant designer who has, to date, completed more than 200 hospitality projects. But she’s not working on “her own” look. She’s working on a new look for Rubio’s—and she’s up-and-coming in the world of hotel design.

Melissa got her start at Catalina Design Group doing model homes. “With a track of four different models, a limited budget and time frame, it was like designer boot camp,” she says. “They would say, ‘Go design,’ and the designers would be responsible for accessories, flooring, all the materials. It was very themed but a great step into the world of design and how it all works.” 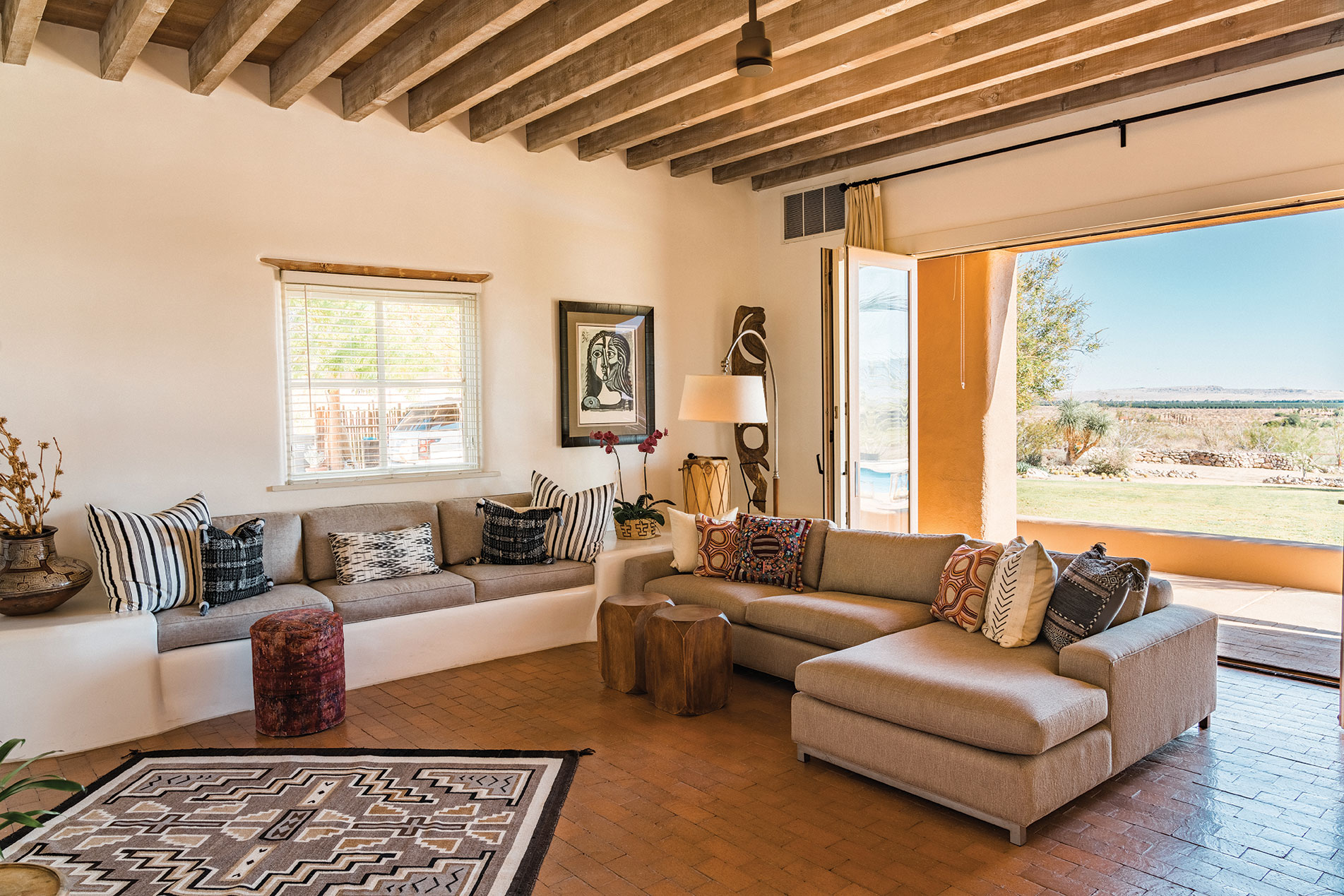 Accordion doors open the living room to the wilds of the desert.

Now, she prefers the corporate work that she and the 15-person team at her company, MY Studio ID, are involved in. “You can push the envelope a bit more,” she explains. “In restaurants and hotels, design can be bigger and bolder because guests are there for just a few hours. You work with a board of directors, so you are working for one specific client whose main goal is making money from the space.” 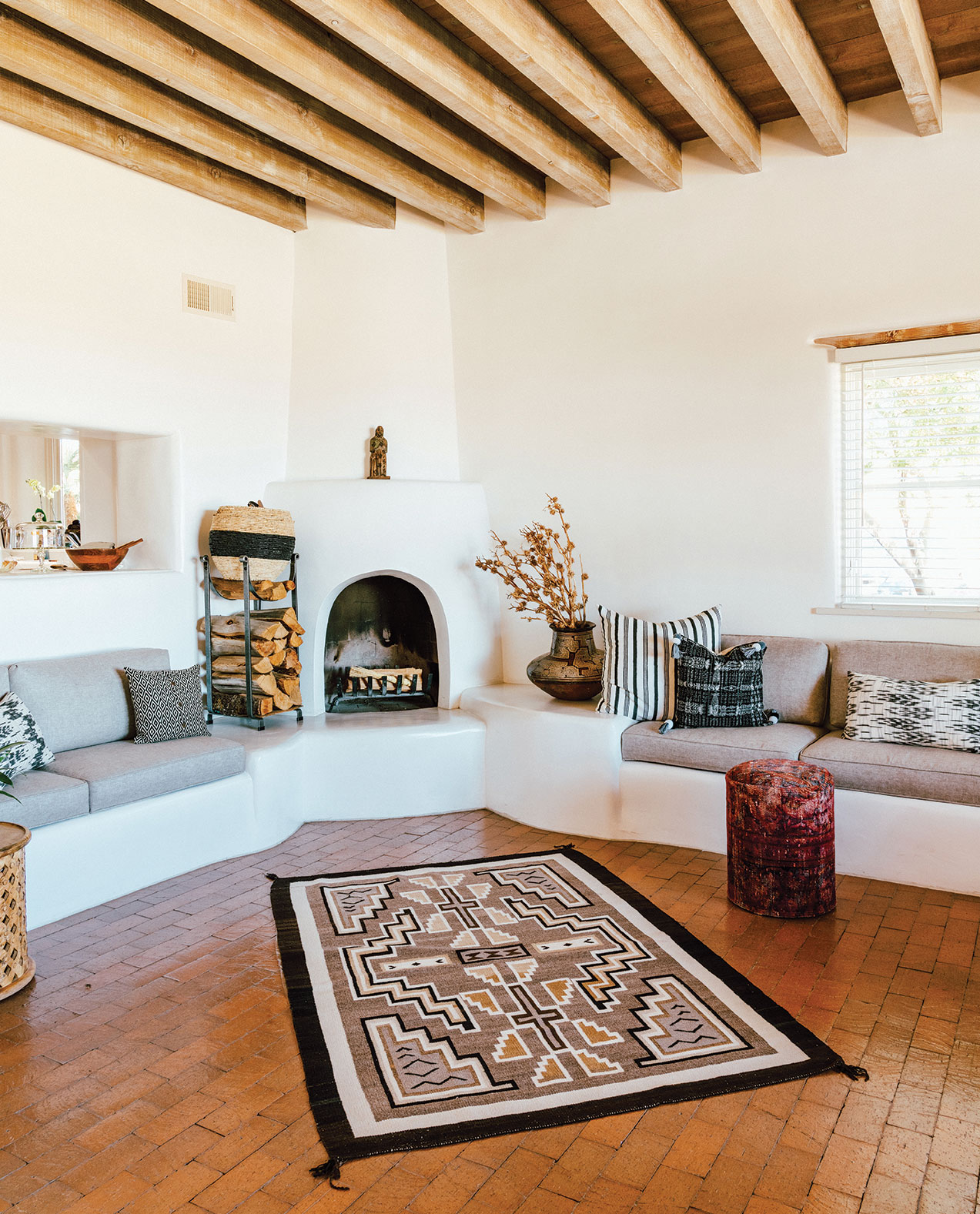 This is quite different from residential design where decisions can be emotional because clients are dealing with their own, personal space. “When you work with a husband and wife, you often become part counselor, part designer,” Melissa says. “In corporate design, you are trusted as an industry leader to make decisions for the space and that takes the emotion out of it.”

Or not. Her first restaurant client was Burger Lounge. That recognizable creation not only landed her as a creative in the restaurant world but also landed her a nine-year romance and recent marriage. Husband Dean owns the place. Maybe that’s why his domain is the kitchen. “Mmmm, that’s good,” Melissa says, as Dean tips the soup into her mouth from the spoon.

It’s Friday, so they are both home after a hectic week working in San Diego—a two-hour drive from the house. Burger Lounge’s corporate office is in Little Italy. Melissa’s office is a converted midcentury-modern home in North Park. But they don’t do the drive from the desert to their offices daily. Monday through Thursday (and often through Friday) they live on Gypsy Moon, their 48-foot Beneteau Oceanis sailing yacht, moored at a marina near the Convention Center. 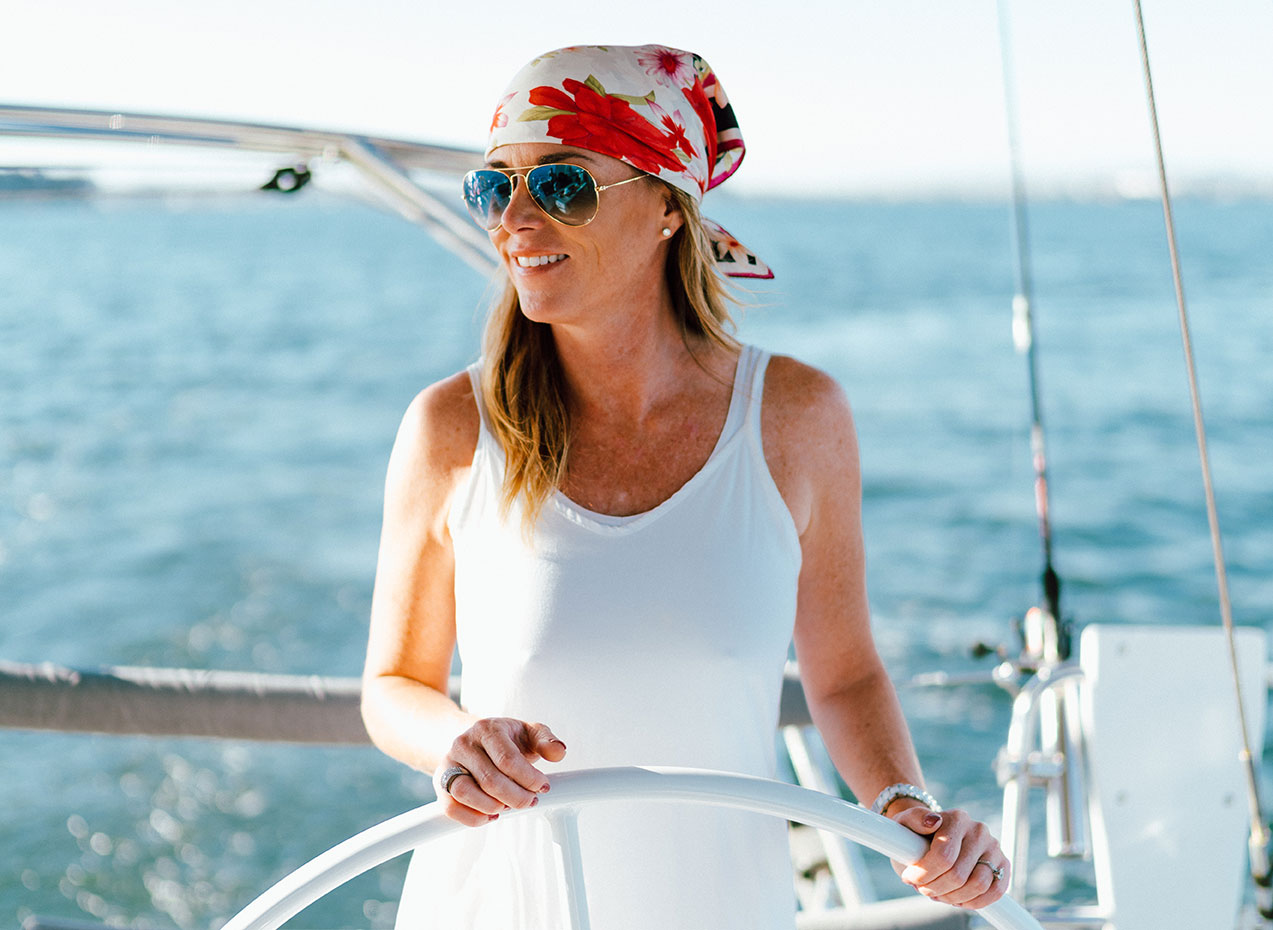 Melissa Young at the helm of her 48-foot Beneteau Oceanis.

“It has three bedrooms and two bathrooms, so there’s plenty of space,” Melissa says. “But compared to the house, it is pretty compact. On the boat, when Dean is in the bedroom and asks if I can get him something from the kitchen it’s three steps away. At home, it’s a long walk.” 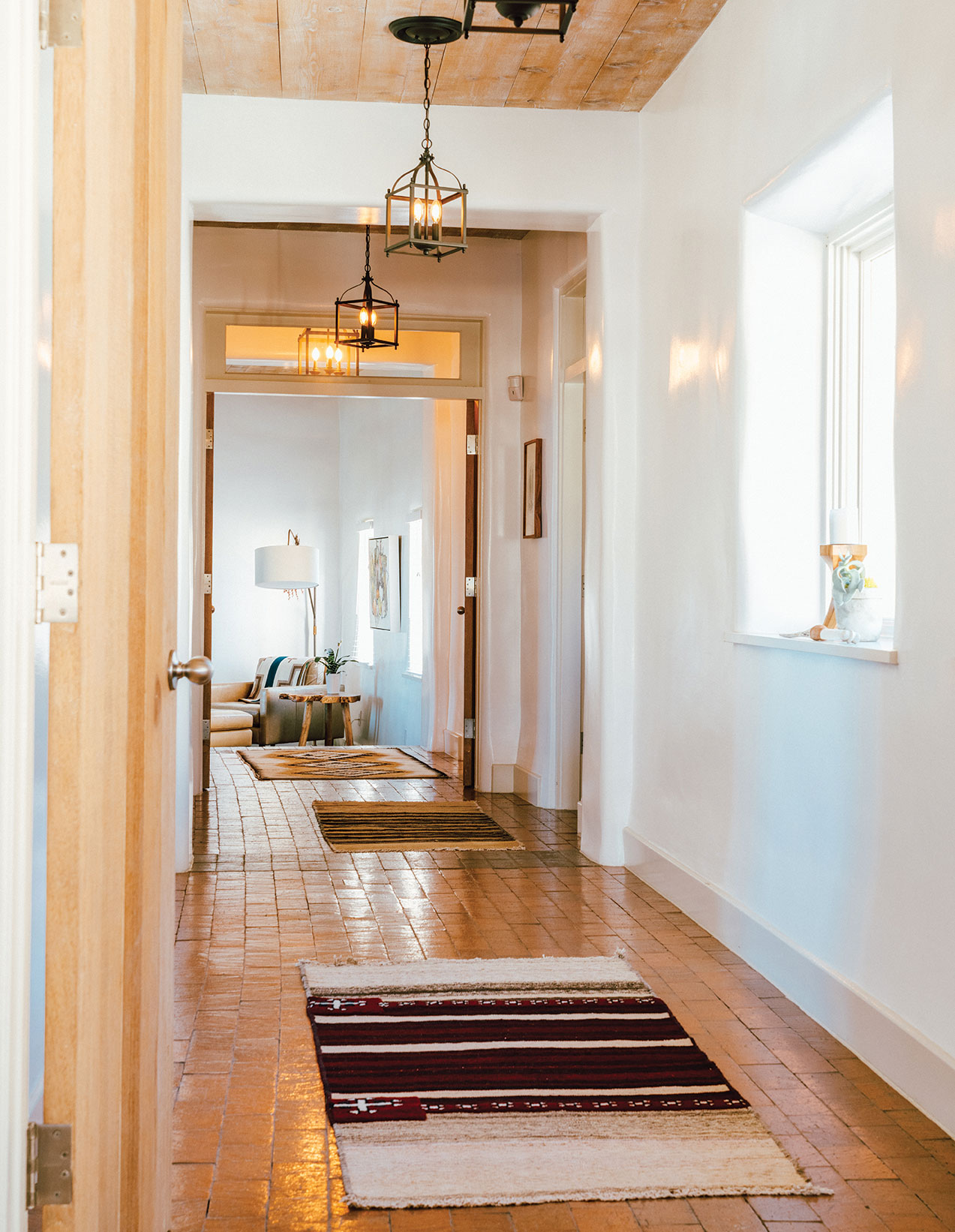 It’s also a long walk down the entry hall that leads to all the other home spaces. This central passageway clues visitors in to the home’s beauty and quality of character: 18-inch thick adobe walls; 10-to-15-foot, rough-hewn, white-washed, wood-plank ceilings; and hand-laid brick flooring with no mortar.

Some of the items that showcase the 1992 home’s Pueblo-inspired design you can’t see from the hallway: three kiva fireplaces (one in the living room, one in the main bedroom and one on the patio); bancos, built-in adobe benches that protrude from the walls in the breakfast nook, living room and the guest wing’s TV room; a long, narrow portal facing the patio, covered with a network of latillas (thin sticks laid across the roof) to provide shade; and doors that open interior rooms to the portal and the glory of the desert landscape beyond. These architectural elements are what prompted Melissa and Dean to buy the house. 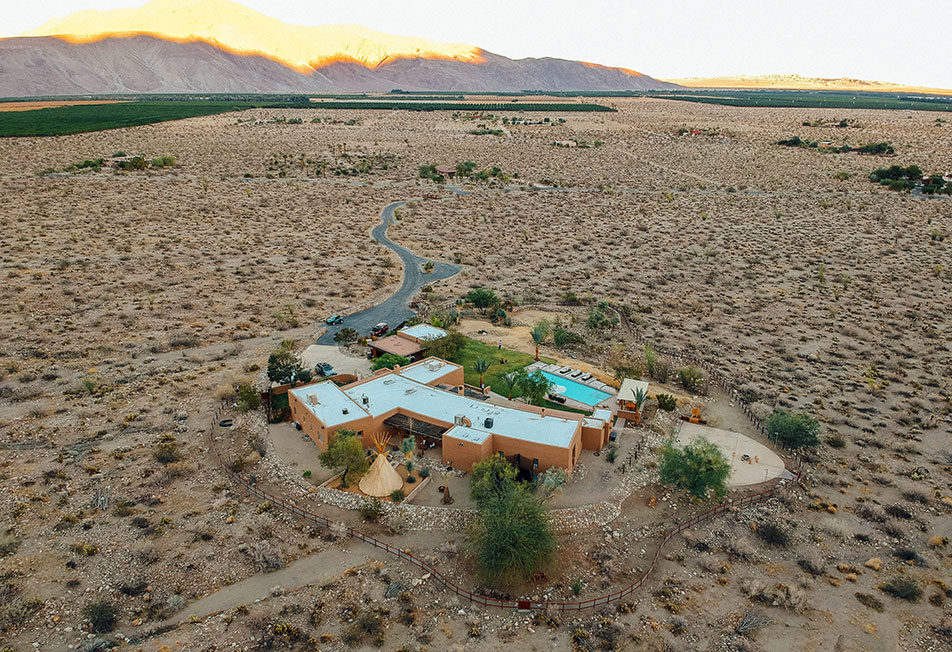 “When I started my business in San Diego, I lived in a high-rise condo downtown for many years,” Melissa says. “Later, Dean and I got a vacation house in the redwoods in northern California, so we would go up there in summer for a couple of weeks. But we were always going to Anza-Borrego. It spoke to our soul. You feel that pressure from the big city just melting away. After staying at every hotel and every rental house here in Anza-Borrego, we decided we were going to build a house here. We bought land, and we were ready to submit our design plans to the city when we came upon this house that had been on the market for three years.” 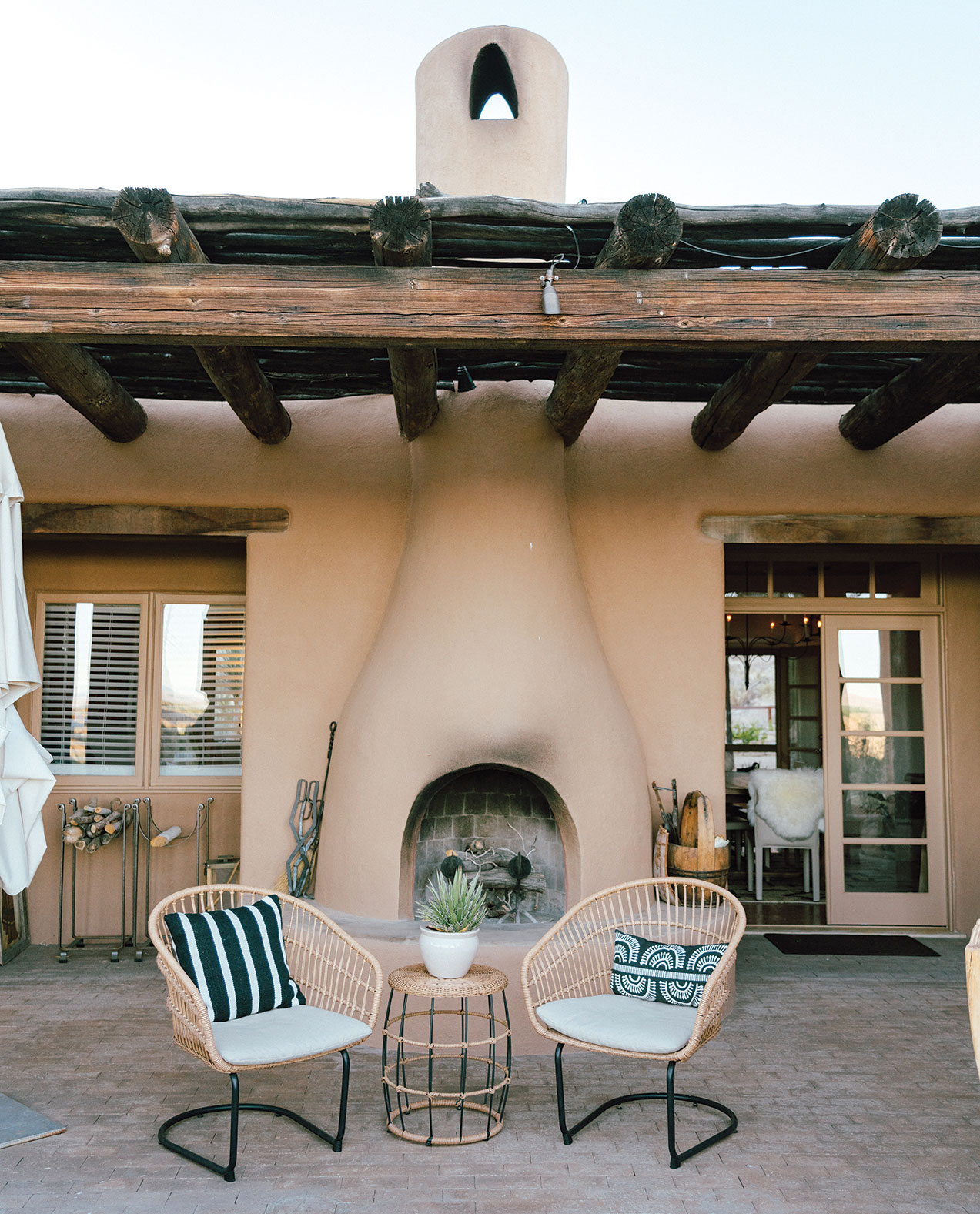 When Dean and Melissa saw the Borrego Springs house on the internet, they weren’t thrilled with the heavily upholstered and skirted couch, Asian-inspired statues and art, blue porcelain urns, and gold-gilded glass hutches filled with tchotchkes that ignored the architect’s vision for Santa Fe style. But when the couple visited the house, they saw past the walls and doors painted in a glossy white and saw the beauty of its authentic, organic design that seamlessly wove itself in with the natural world outside its front door. Plus, they couldn’t build the contemporary house they were planning for the price of this hacienda.

“So, my big idea was to give up the condo and live on the boat during the week while we worked and lived in the desert on weekends,” Melissa says.

The idea was a great one—even though they had to take off all the white-painted doors (“42 of them we learned,” Melissa says) to sandblast them back to natural wood. A separate wing across from the breakfast nook with its own TV room, bedroom and a master bath have become home for Dean’s father. A large space off the master bedroom at the end of the house works beautifully as Melissa’s home office. 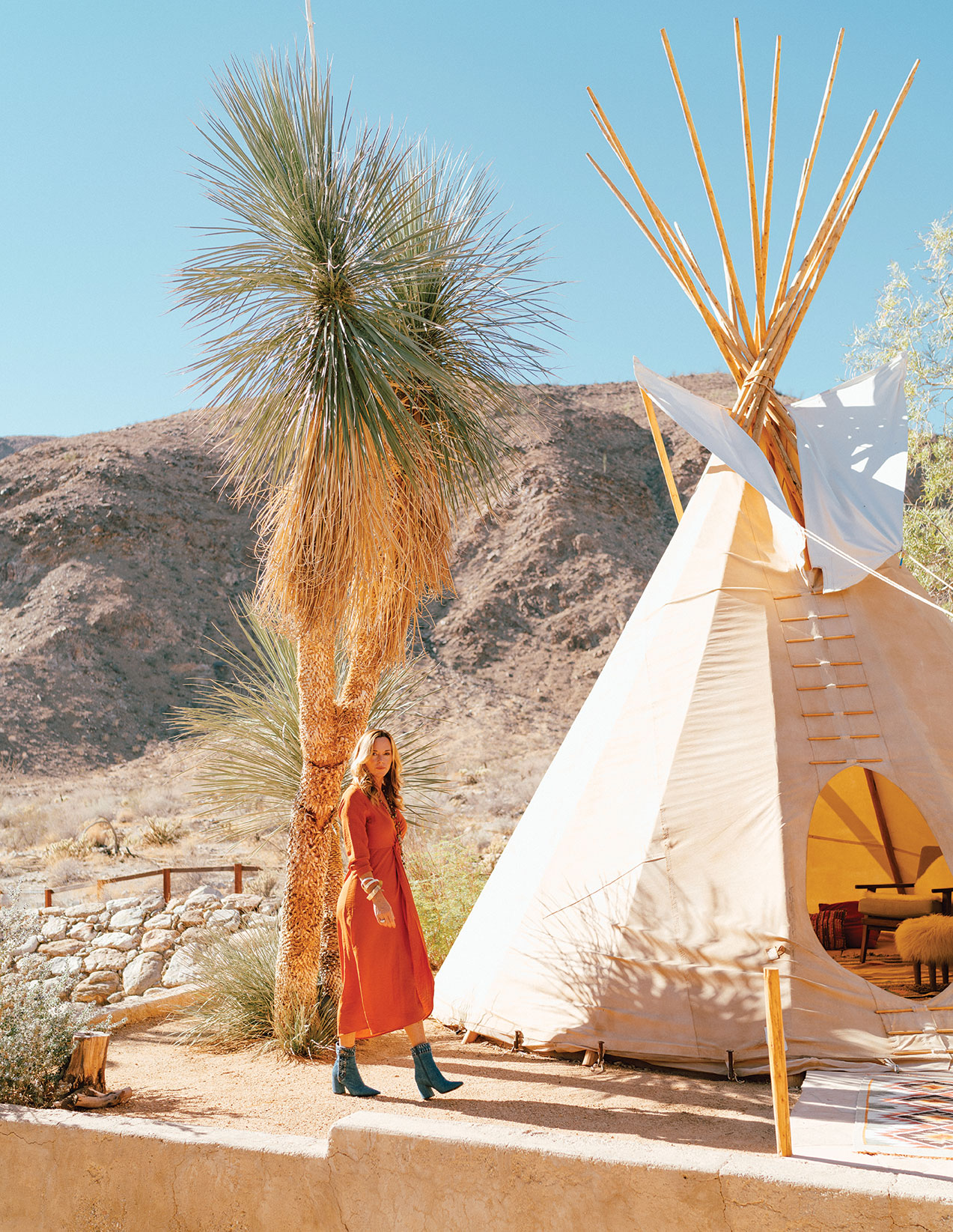 Outdoor entertaining in a So Cal desert setting

The free-flowing floor plan works well for entertaining—Dean and Melissa love to entertain—as does the swimming pool, jacuzzi and al fresco dining and barbecue area. “It’s easy to have a lot of people over,” Melissa says. “There are different pockets of the house, so there are plenty of spots for people to go.”

And when Melissa and Dean need to slip away from the party, they disappear into their cozy teepee. Sitting at the back side of the home on an adobe platform, which used to house a dilapidated fountain, it’s the perfect getaway spot from the getaway weekend house. “We sneak in there for a glass of wine together. Sometimes I like to go in there alone and reflect for a moment,” Melissa says. “That helps me to become the creative being I need to be for interior design.

“We pinch ourselves all the time,” she continues, talking about their lucky home find. “But because we have the sailboat, in the next couple of years (well, we keep saying in two years) we want to take some time off to sail from San Diego to the South Pacific.”

If that happens, for a little while the bighorn sheep will have the place to themselves again. But maybe they won’t even notice the difference. 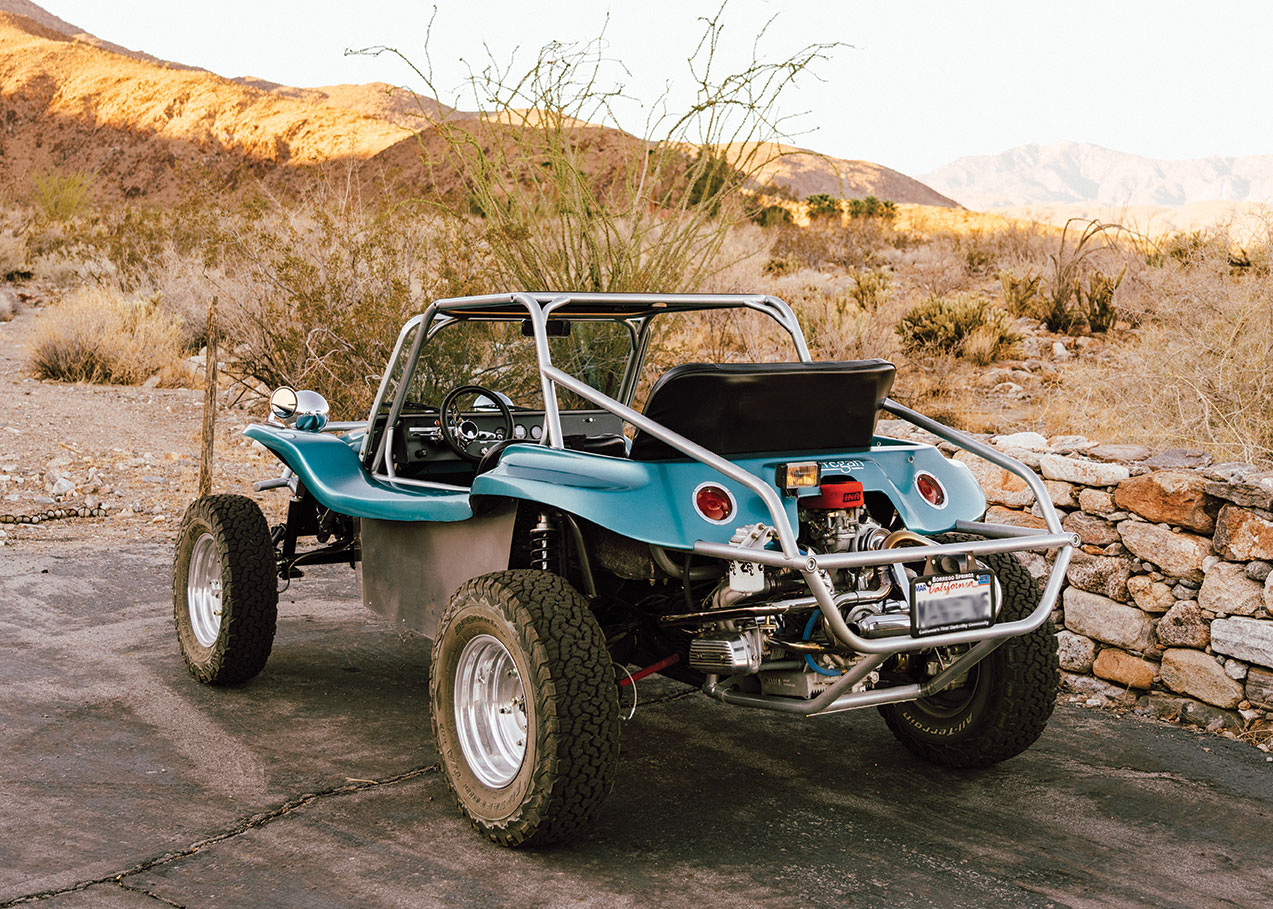 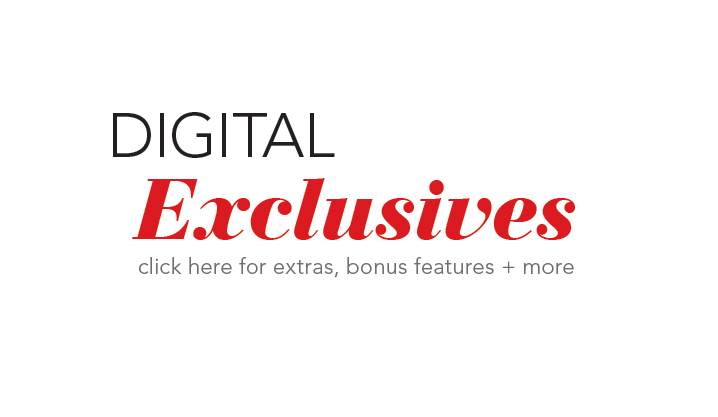 Read our digital exclusive about Melissa and Dean’s tips for a very extreme form of small space living: Life on a boat! Melissa lists her necessities and design priorities when building a life in a home-away-from-home, on the sea in San Diego’s harbors. Get the story here.