The Family You Choose 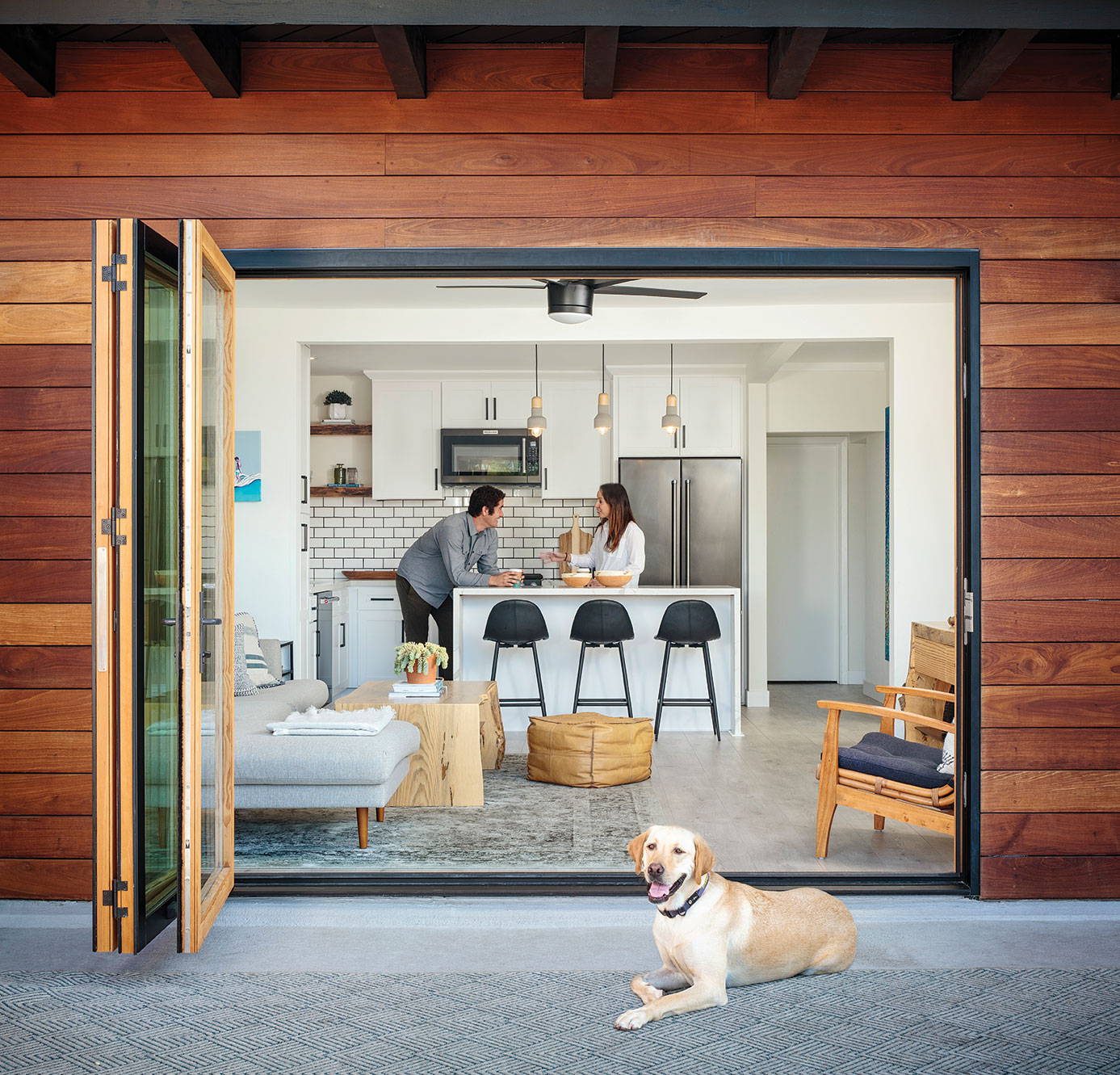 Whiskey the 3-year-old Labrador retriever is not only the heart of this indoor-outdoor home, he’s also our April cover boy (and, we should add, a bit of an Instagram star).

For Katie Gebhardt, working with friends and family taught her to prioritize authenticity in her relationships with clients, especially in the early days of developing her interior design firm, Solstice Interiors.

“It’s a combination of seeing eye to eye, but also meshing with each other. You’re in each other’s lives for like, a year,” Katie says.

And it’s also shown her the value of surrounding yourself with creative and capable friends.

The hub for Katie’s community of creative friends is an airy and bright residence by the beach, owned by her longtime friend Kevin Newberg, and designed by Katie.

Whiskey, Kevin’s sweet, 3-year-old Labrador retriever, drops a stuffed lobster toy at Katie’s feet as she talks. It’s a warm day in La Jolla’s Bird Rock neighborhood, and the eye-catching, wood-framed double doors to Kevin’s spacious and sunny deck are flung entirely open. Serving as the front entryway to the home, the doors often stay open all day, transforming the common living area and deck into one large space.

“This is the epicenter for our friend group,” Kevin says. He hosts weekly Sunday hangouts, with standing invitations for friends, neighbors and family to gather on the deck to grill and watch football. The deck is ample enough to be Kevin’s primary outdoor space, and because the home is just a block from the ocean and (literally) upstairs from Bird Rock’s shopping hub, it’s enough. Kevin says Whiskey is a beach dog through and through, but the stairs mean a little improvisation. 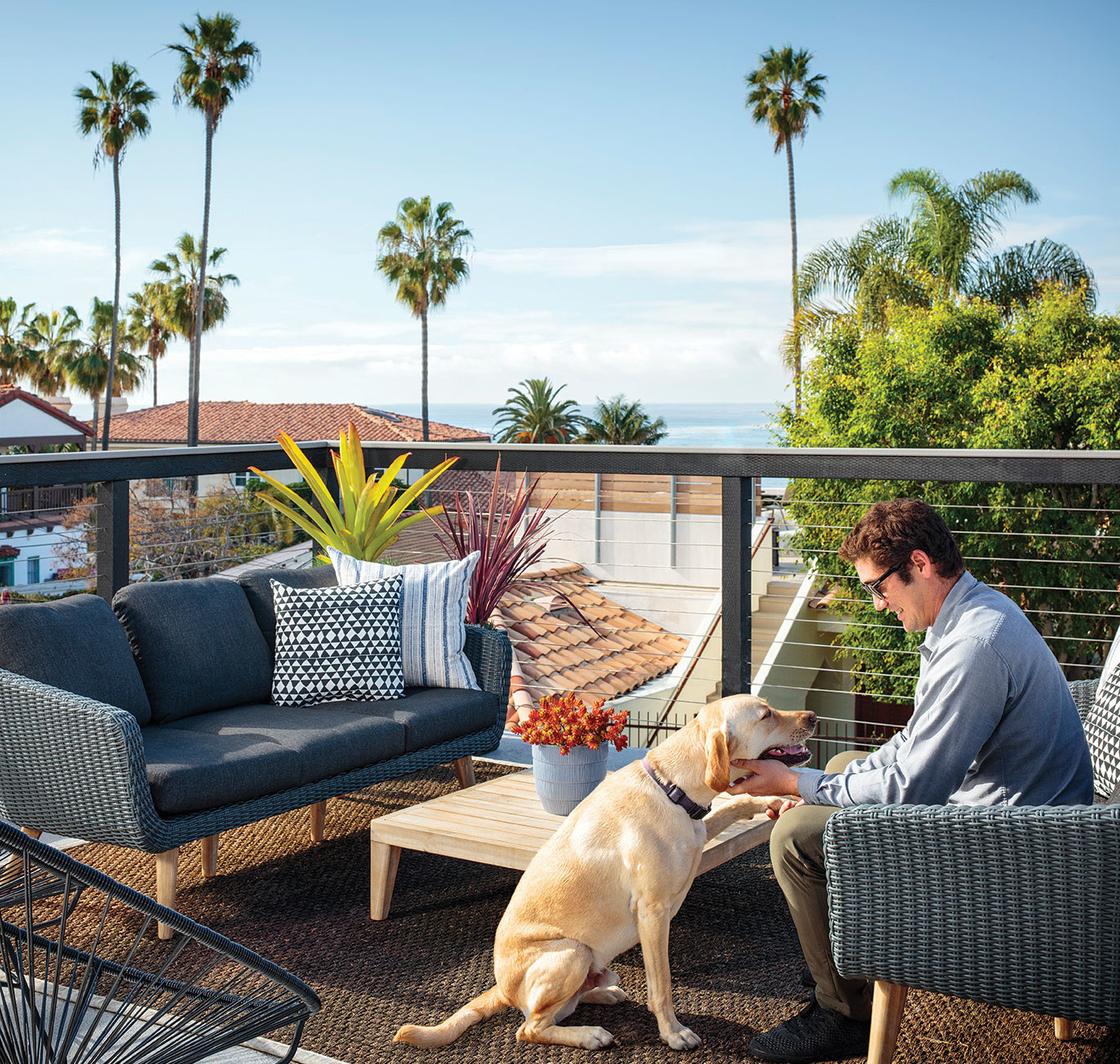 Homeowner Kevin Newberg relaxes with Whiskey on the sunny deck overlooking the Pacific. The deck is part of Kevin’s central indoor-outdoor living space, making the most of the beautiful weather and a smaller interior space.

Katie picks up the lobster toy and tosses it down into the alley below. Whiskey, knowing the game, trots down the concrete stairs, retrieves the toy, and trots back up, dropping the toy at Katie’s feet again.

If Whiskey’s attachment isn’t an indication, this house was more than just a project for Katie. She’s practically family.

Building A Career with Creative Friends

“Most of my business comes from Instagram,” Katie admits. But developing her client list in the early stages of her business depended upon having solid examples of projects in her portfolio, and much of Katie’s early projects are collaborations with creative friends, like Kevin. 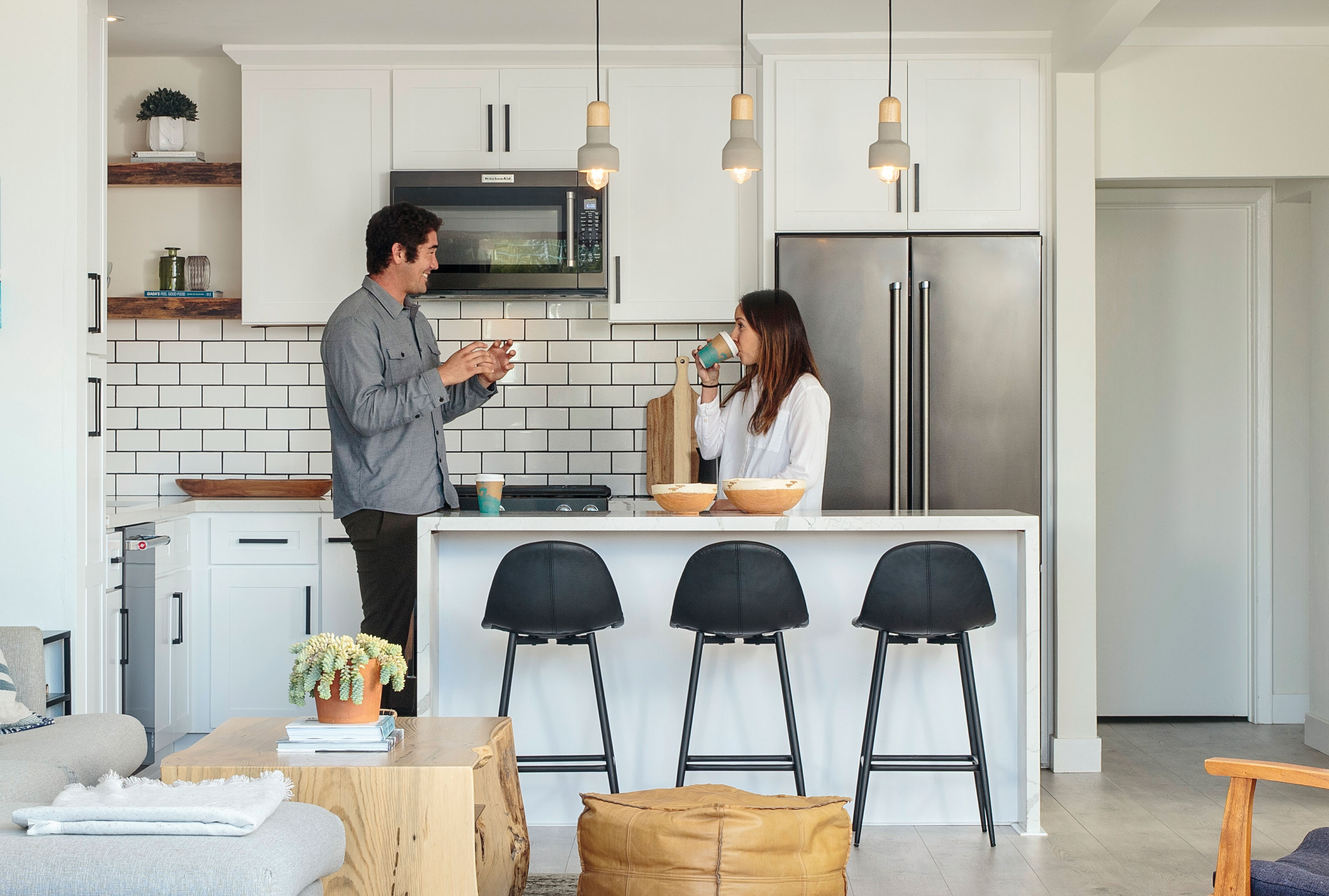 The kitchen’s island features a waterfall countertop for seamless design and ease of care. With three bachelors (and a dog) living here, Katie focused on durability in materials and layout.

Kevin bought what everyone affectionately calls “Whiskey House,” (named after, of course, Whiskey the dog) several years ago and paired up with Matt Coder of Coder Construction to begin work on the project. It was, essentially, a bachelor pad. Kevin, no stranger to real estate investments, saw it as a temporary step, and a bit of a design challenge. A few months into the design and ideation process, they brought Katie in. She’d known Kevin since college, and the two understood each other’s aesthetics and priorities. Their vision? Surf cottage.

“I love collaborating with clients that have a similar style, so we can bounce things off each other,” Katie says. “Trust is really important.” 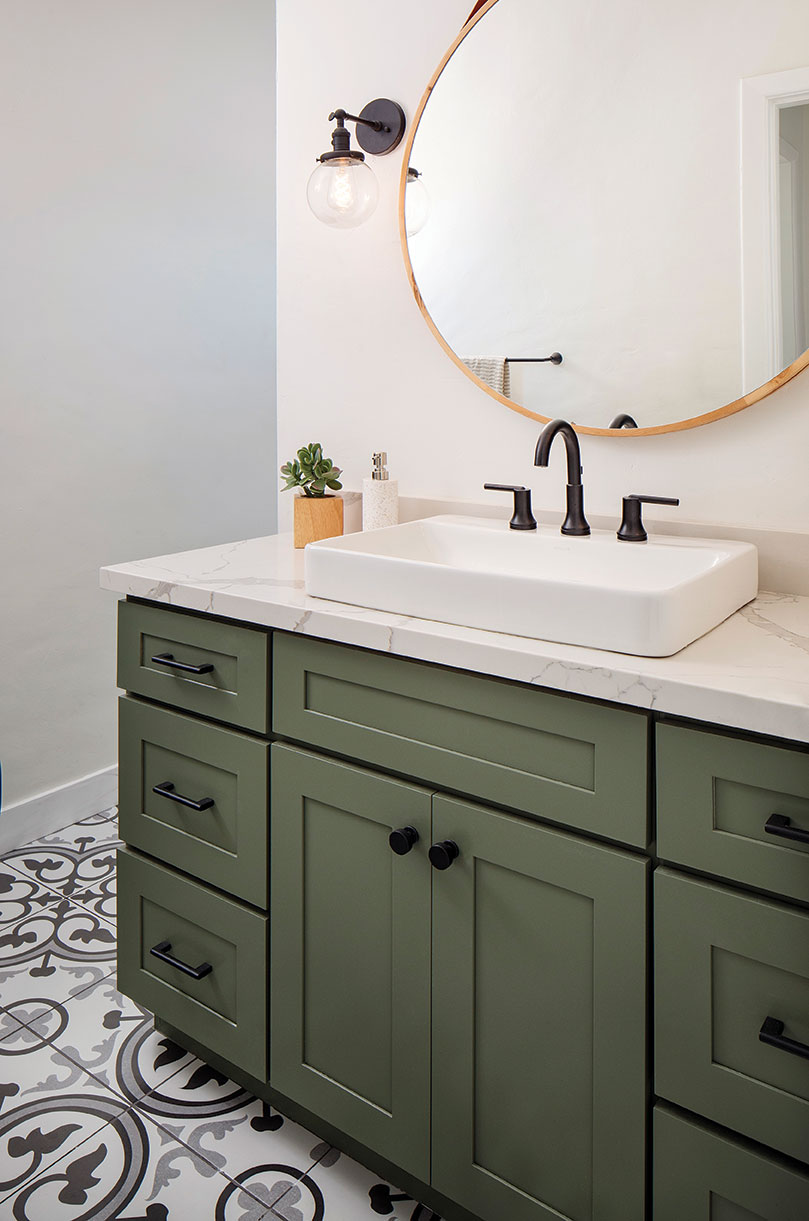 “That’s Just the Way He Lives.”

Of the decisions made about the project, some stand out to Katie as places where their friendship worked in their favor to manage differing design preferences. “In the master bath, I wanted just one set of drawers, and on top, a floating shelf,” Katie recalls. She imagined the shelf as a place for “cute baskets” for storage.

But Kevin, knowing how he’d live in the space, encouraged her to rethink this. “He said ‘No, I’m just gonna pile up junk on there.’ He wanted a fully closed vanity,” Katie says, laughing. “That’s just the way he lives.”

In addition, Kevin wanted to mimic the kitchen’s white shaker cabinets in both bathrooms, but Katie talked him into adding some color. The custom bathroom cabinetry is actually prefab. Matt sanded and painted the cabinets in both bathrooms: a custom vanity without the custom budget. Each bathroom has unique, unexpected—and budget-friendly—tiling touches: vertically stacked subway tile, penny-style shower floor tile, and unique medallion-patterned flooring. 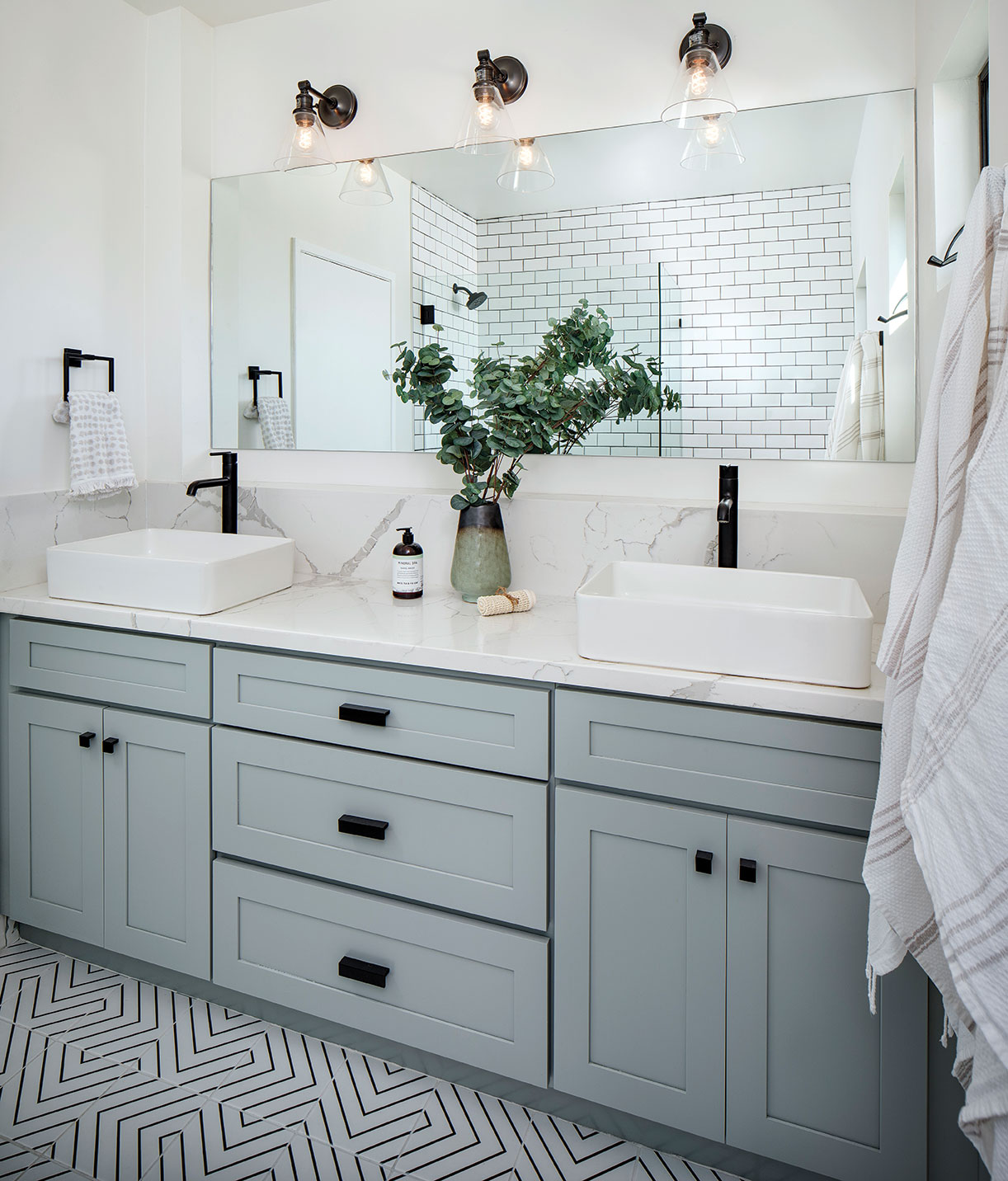 The palette in the master bathroom is monochromatic, and the overall bathroom aesthetic is still the clean-lined Zen space Kevin wanted.

Shortly after completing the project, Katie wished she’d pushed Kevin to be more adventurous with the kitchen. He wanted all white cabinets, whereas Katie wanted to add a splash of contrast with black cabinetry in the island. “That’s an easy area to be a little more adventurous,” Katie says.

However, now that Kevin has lived in the remodeled space, Katie understands it was the best decision. “The white’s timeless, and it’s so small in there, so there are definitely pros to keeping it all white. It feels more spacious, and light and airy,” she says.

On the other hand, Kevin lobbied for dark grout on the kitchen’s subway tiles, and Katie loves that touch of contrast. 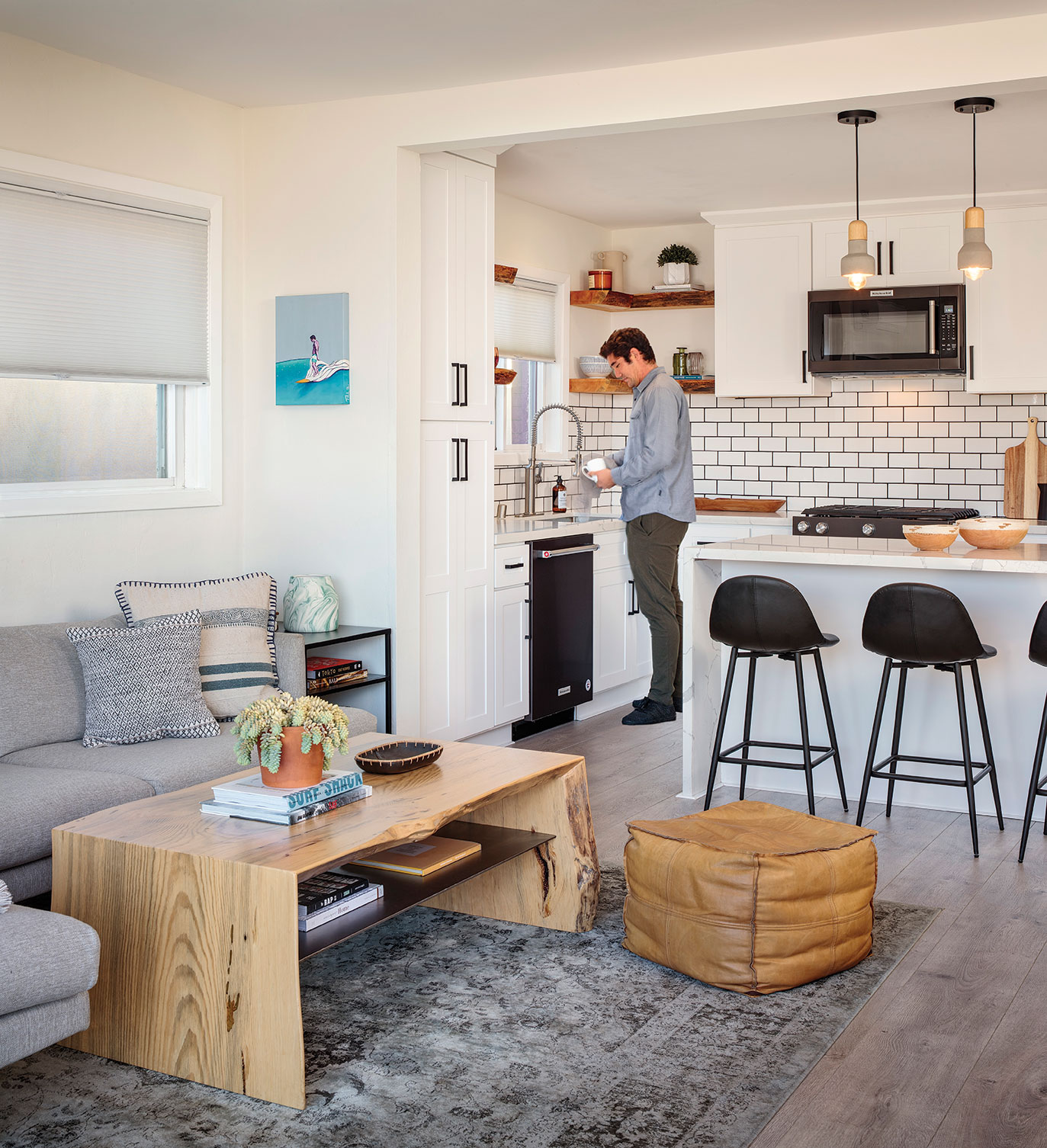 A shared history between friends doesn’t just make for easy navigation through decisions, it also brings a bigger extended family into play. Katie and Kevin also turned to other friends to bring meaningful touches to the home.

A custom fallen-tree coffee table and low-slung media cabinet in the living room were handcrafted by Tom Rossi, a woodworker and Kevin’s best friend from college, and much of the home’s art is the work of friends and family.

But most importantly, Katie had a good sense for how Kevin lives. “Part of the goal here is to make sure everything is durable,” Katie stresses. With beachgoing young men—Kevin and his two roommates—living here, plus Whiskey, materials needed to hold up to heavy use, but also be as low maintenance and low fuss as possible.

The team opted for a snowy, gray-veined quartz in the kitchen. “It gives you that marble look but it’s bulletproof,” Katie says. “It’s a no-brainer for durability and budget.”

Maximizing Space and Durability Outside

Outside, the spacious deck also serves as storage for laundry and Whiskey’s supplies in handsome enclosed cabinetry (right). “The laundry area outside has a concrete countertop, so that’s pretty durable,” Katie says. And its proximity to the (several) grills in the outdoor living area makes it a handy catch-all. “You can slam whatever on there.” 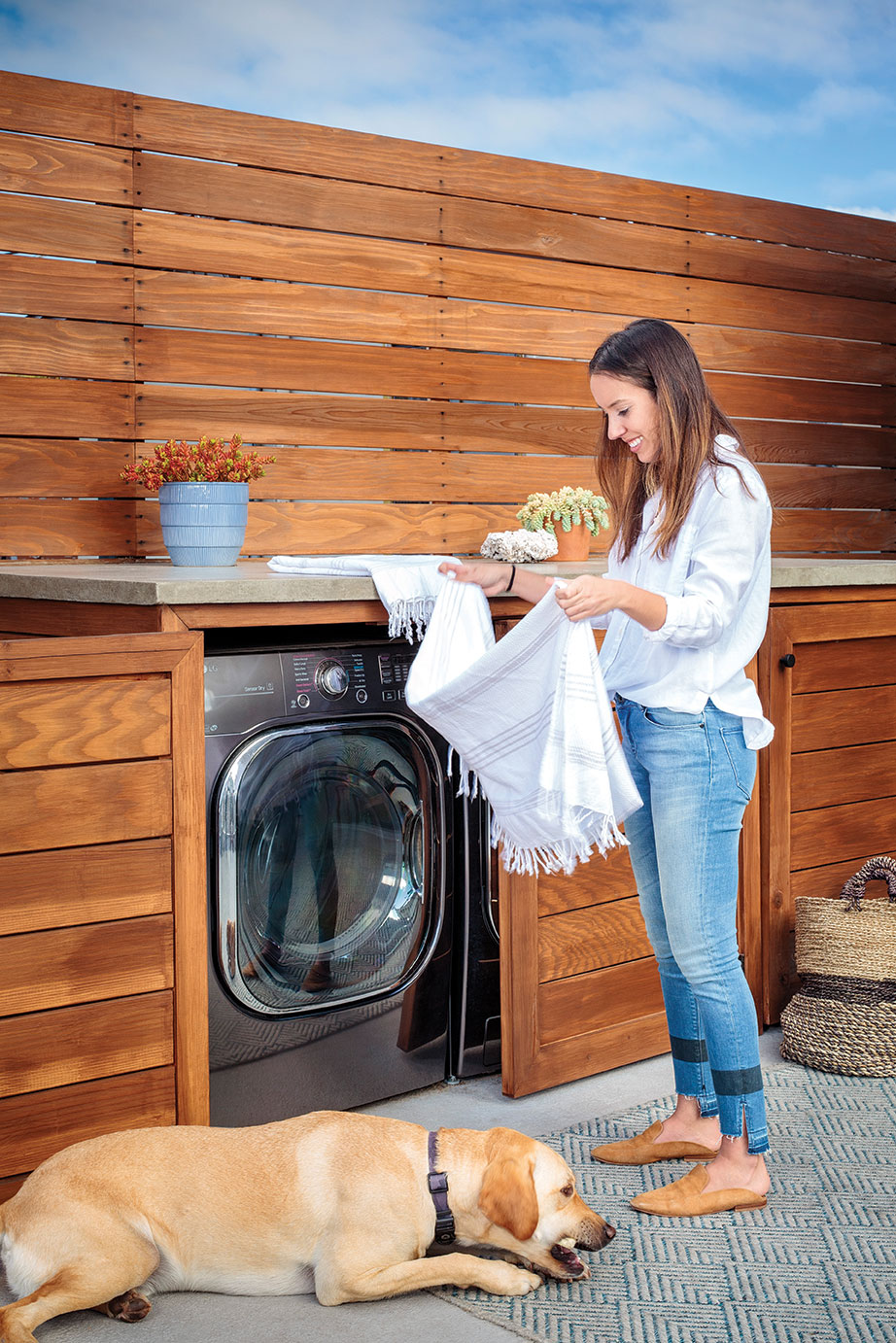 The four-legged resident also had an important role in the pursuit of durability in the design process. When ordering a fabric swatch for the couch, they gave it to Whiskey. “We did the same thing with the main flooring. We got a sample and took keys and Whiskey’s claws to it,” she laughs. “Whiskey is like another bro in the house for sure. They all basically would do the same things. It needed to be durable for the guys and Whiskey.”

And for the elements with the home’s proximity to salty ocean air. The surf-cottage vibe of the home is more than just a surface aesthetic. Kevin surfs daily and takes Whiskey for walks on the beach as often as possible. “Matt helped a lot with the exterior, choosing which materials would be best for that sort of setting, since it’s right on the water,” Katie says of their work with the contractor, Kevin’s frequent collaborator.

They selected extremely durable Brazilian ipe wood for the coast-facing exterior. “It’s the best of the best for outdoor wood,” Katie says, though it was her first time working with ipe, pronounced ee-pay. (“I was saying ‘ayep’ [rhymes with wipe] for a couple of weeks,” Katie admits.)

The rich, caramel tones of the ipe accent wall warm up the rest of the exterior, inspired by the black-on-black trends in architecture in Kevin’s ancestral Japan. His grandmother lives there, and on a recent visit, he fell in love with Japanese architecture—particularly the lines and colors—and took notes. The ipe contrast, along with carefully selected container landscaping, prevents the starkness of the black from being too severe.

Kevin and Katie worked with Garrett Henry at Nature Concepts on landscaping the deck. Their landscaping priorities? Plants that wouldn’t block the ocean view, would thrive in strong sunlight and be low maintenance. Katie selected a bunch of attractive pots from a local boutique, and with a mix of low-profile but richly textured tropical plants and succulents, the deck shines in its role as primary—and hardy—green space. The sparkling Pacific is an unassuming backdrop. Even Whiskey, exhausted (temporarily) from his improvised fetch game, curls up in a shady patch to nap. 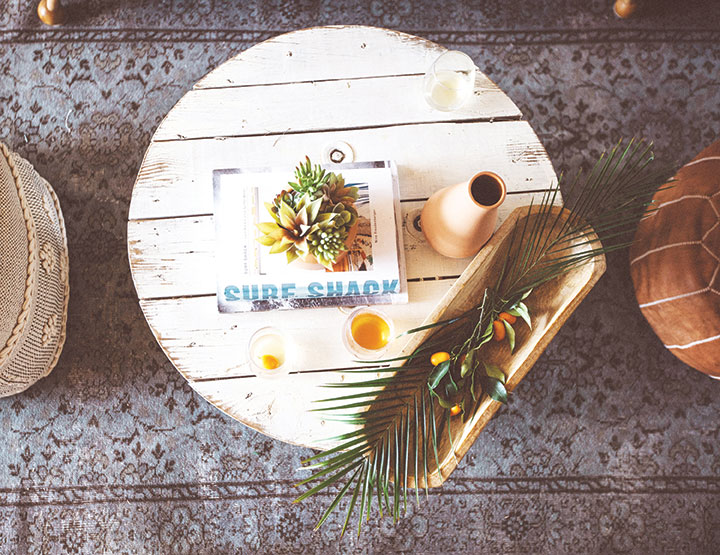 Katie designed the interior for North Park’s JuneShine, the world’s first hard kombucha bar, developing her signature “surf shack” style. The result is a dramatic but airy and casual space, with no shortage of ocean-inspired colors and decor. Photography courtesy of Forrest Jaqua.

Katie has quickly stacked up some amazing projects in her growing portfolio, and, like with Kevin Newberg’s home, she worked with clients from her community of friends—and expanded that community more along the way. 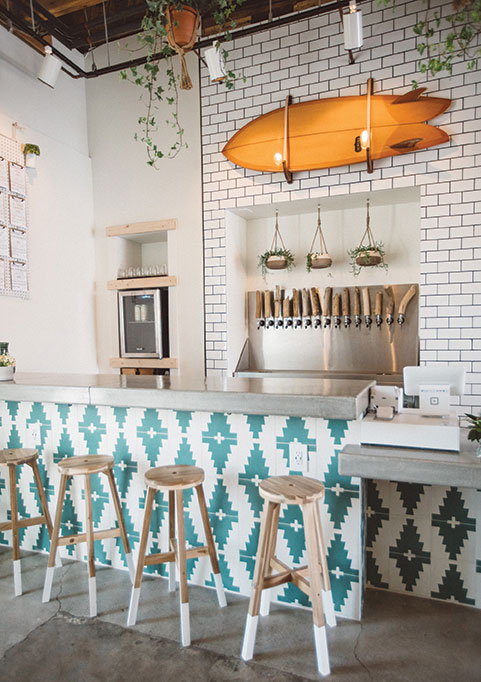 Steeped in the healthy lifestyle, the brand’s creators turned to Katie to capture her signature “surf shack” aesthetic for a bohemian, clean space. And it was a natural choice for her, too.

“For Juneshine, I felt like the brand, the product and everything they were encompassing was in line with my lifestyle—creating this healthy, organic alternative to drinking—and I’ve always loved kombucha.

“With Juneshine—same with Kevin’s place—they were both projects that I could show my surf-shack vibe and my more modern twist on it. The coastal-living vibe,” she clarifies, laughing at the term “shack’s” connotations. “Not coastal like nautical, but true Cali coastal.”
3052 El Cajon Blvd., 619-501-8311, juneshine.co

“I loved that project, and that client,” Katie says of Leo by Liv3’s Jina Javiar. “She was such a dream.”

Jina found Katie on Instagram after seeing pictures of the Juneshine project, and the two found a common goal and idea: a lack of design-savvy nail salons and wellness spaces in San Diego. “That was the root of what we wanted to design around,” Katie says, “creating a place that was very much centered around wellness.”

The two became fast friends as the project progressed, building a relationship around shared visions and mindsets. A custom decal on the floor reminds guests—and Katie and Jina—to always “be good to yourself.” 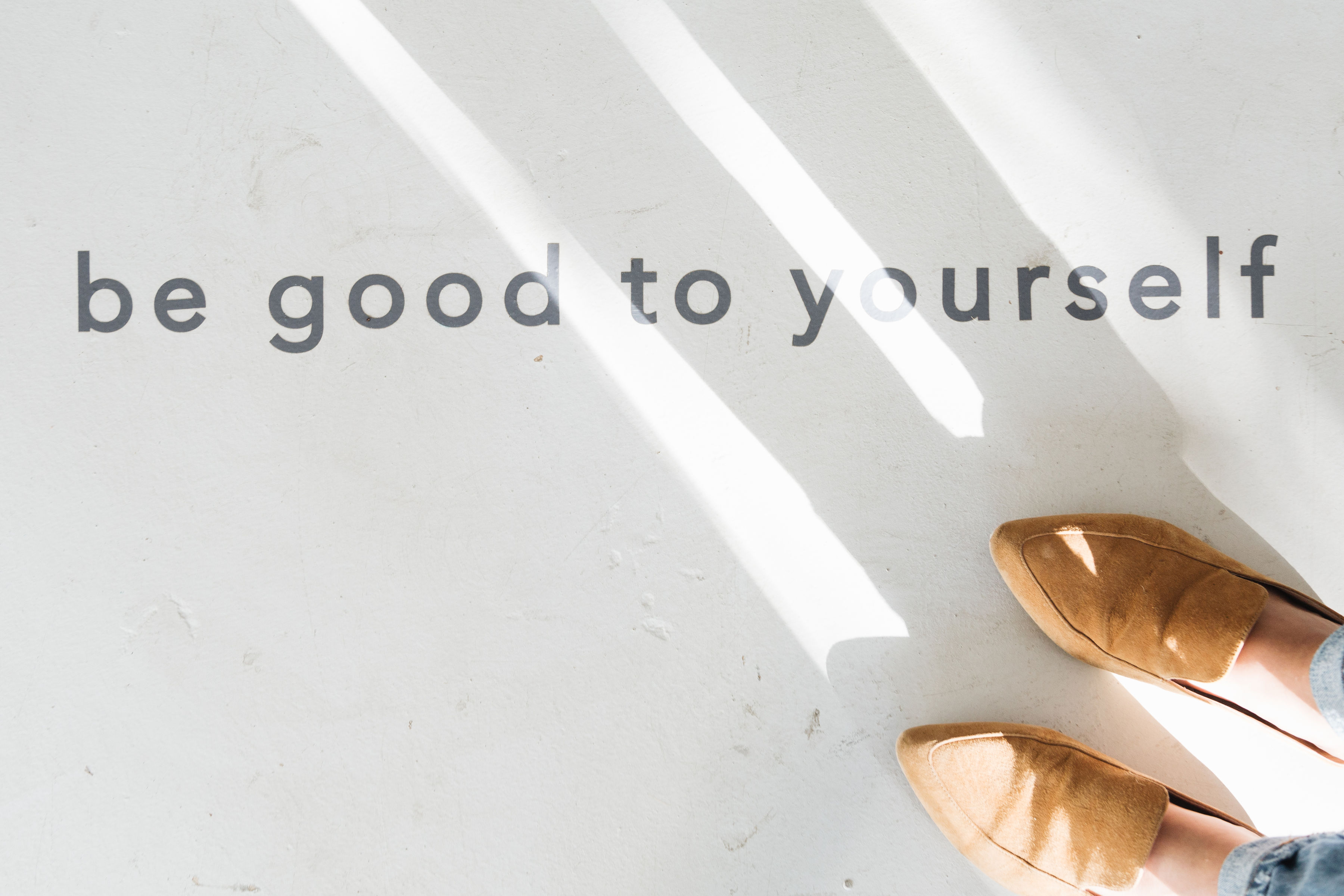 The floor at Leo by Liv3. (Photo courtesy of Katie Gebhardt)

Opening this spring in a space shared with Barre  + Bay Wreath and Meka Coffee, Wildflower is more than just a stem bar. Katie wanted to help owner Brooke Shoemaker create a place where people could gather and build community.