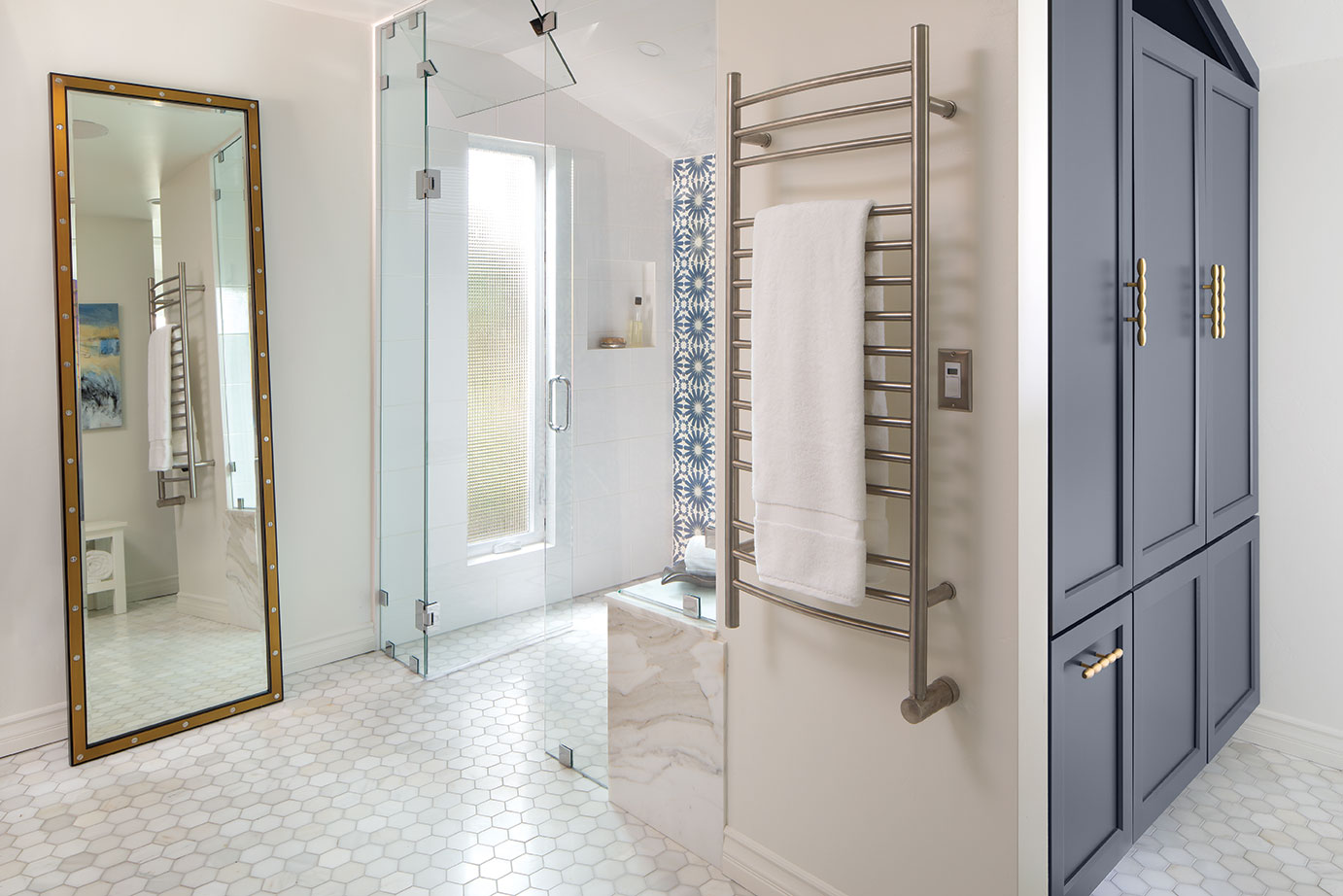 All photography by Brady Architectural Photography.

Maureen Feary loves her rambling California ranch-style house in the wooded area of Point Loma but, she says, “the master bathroom was a short fall.” And by short, she means limited in style, counter space and tiny for her 6-foot stature.

“It felt like I was in the land of the Lilliputians but friends always commented that it was such a big space,” Maureen says. “I just couldn’t see it that way. It was a tired bathroom that never felt big.”

With a shower and toilet room shoved off to one side and an adjoining room containing two mirrored closets flanking long walls and matching tiny vanities separated by low partitions, it was no surprise that the area felt claustrophobic. 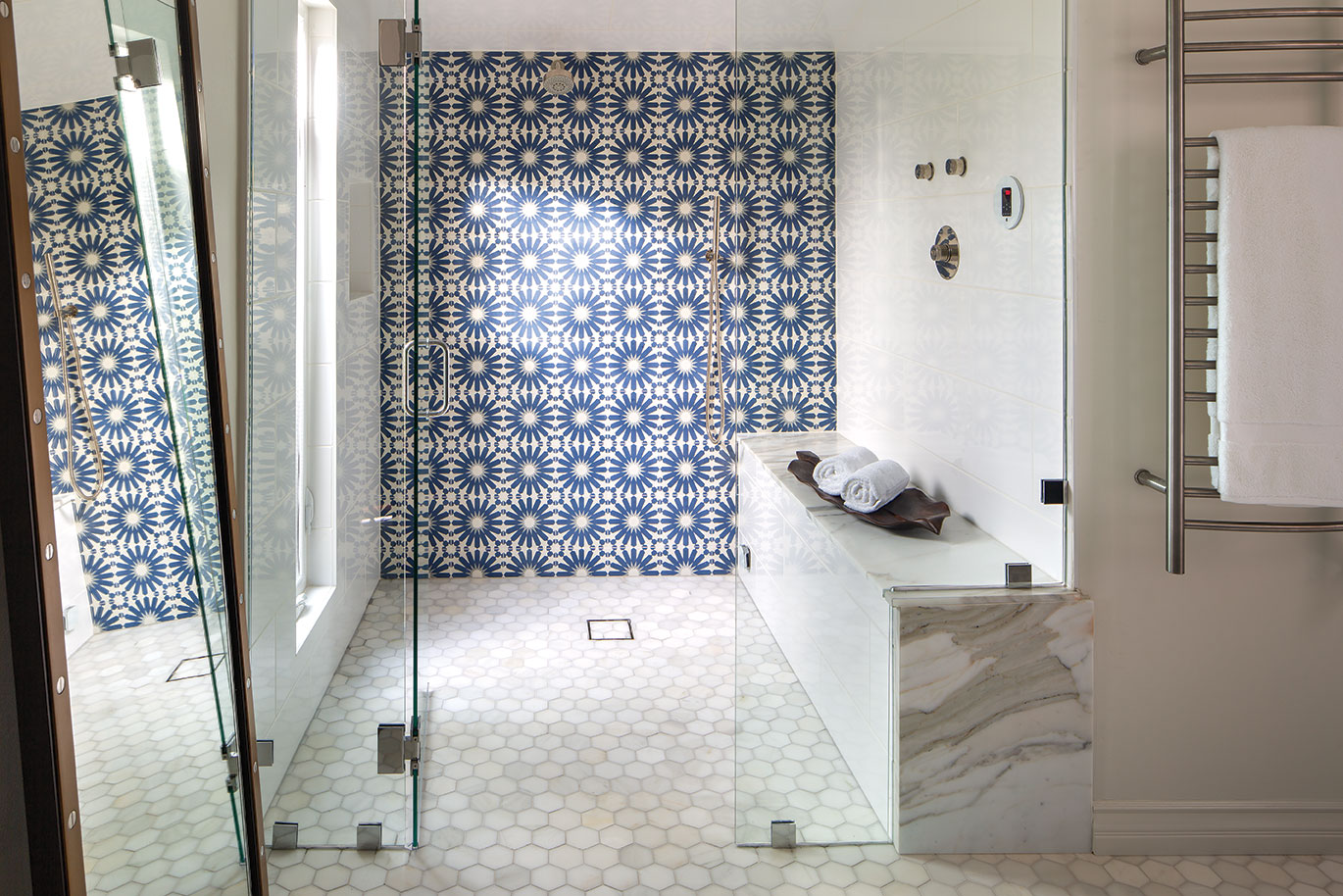 “In the new plan that old shower and toilet room became a large walk-in closet with numerous custom details,” says designer Linda Medina, who previously had worked with Maureen on other rooms in the house. “An additional ‘everyday’ closet near the toilet area contains built-in laundry hampers and hanging storage for T-shirts, robes and PJs as well as drawers and shelves for the sweats and tennis shoes Maureen wears for sports activities. She’s athletic and is on a rowing team at the bay early each morning.” 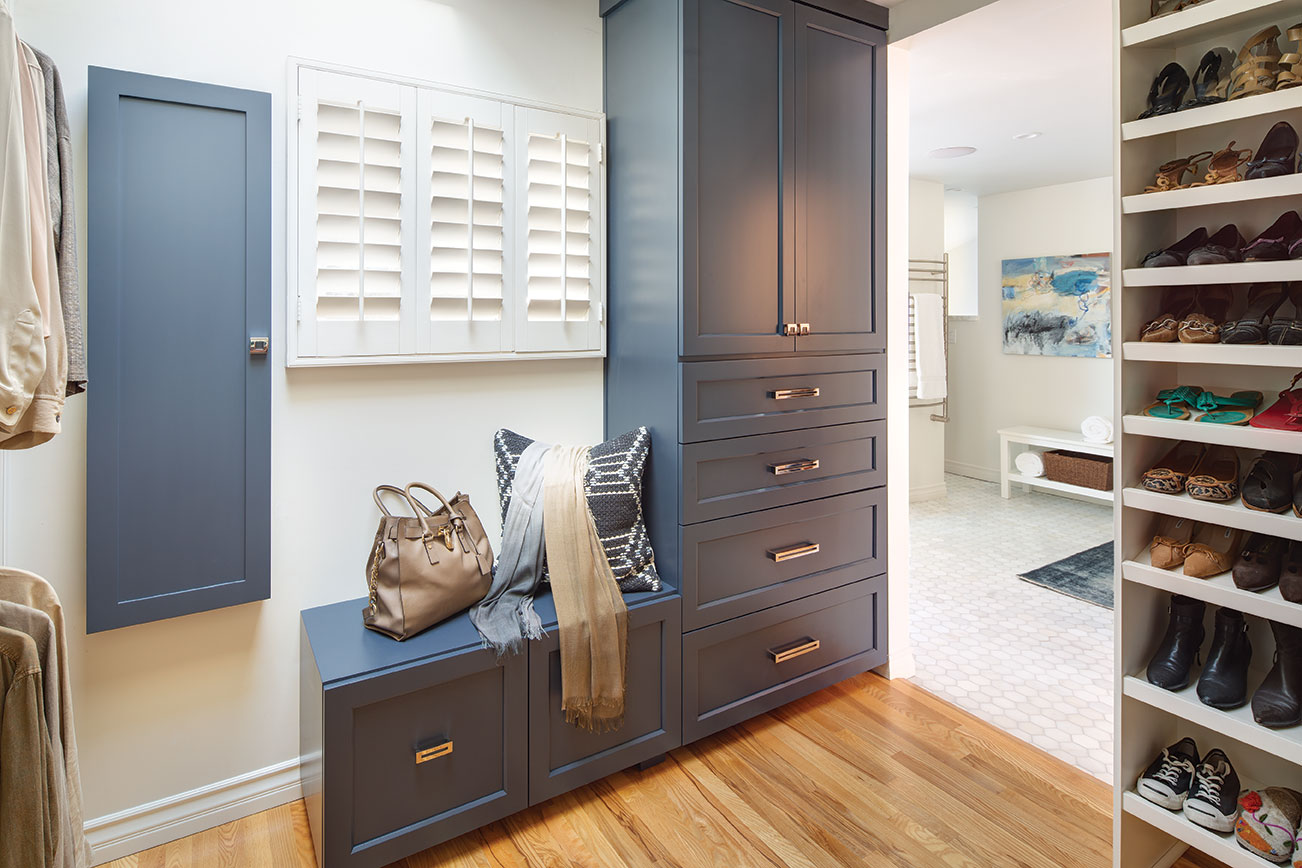 Linda provided several options for Maureen to look at in regard to the major change she requested for her bathroom. Although Maureen agrees they were all lovely, a couple were too delicate for her taste. “In general, I am pretty tailored in my preferences. I play sports, I own a business and I didn’t need it to be so refined,” she explains. 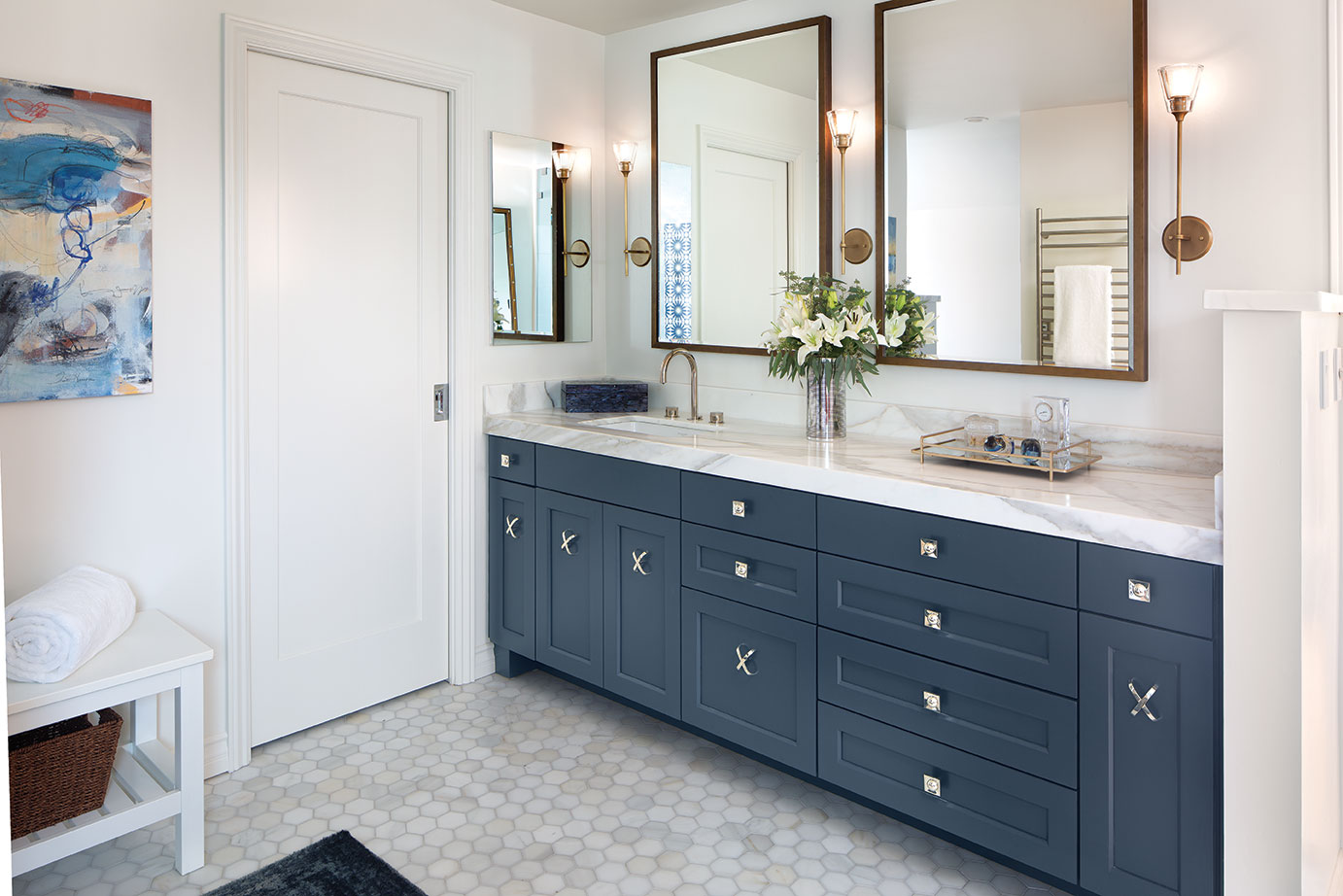 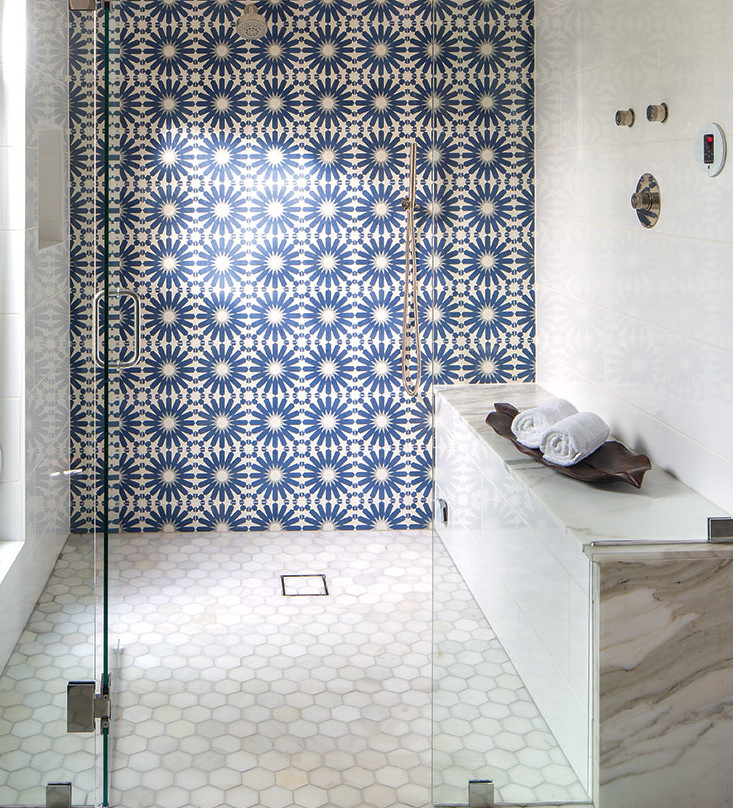 Although a glittering chandelier was not her aesthetic, the elegant marble—in combination with a daring concrete tile Linda showed her—fit her energetic personality like an oar fits an oarlock.

“The marble is beautiful and the contrast just makes it look fresh and bright and gives it pow!” she says.

Large format subway tiles in a sophisticated white live next to the high-spirited concrete on the shower’s backsplash wall. There is no tub.

Some of Linda’s layouts did include tubs but, says Maureen, “tubs are not me. We went for a refreshing steam shower instead of a tub and it’s fantastic.”

The Bold and Beautiful

Tips from an award-winning designer on going bold

“I like to create an emphasis in the space using a tile that has a strong pretty pattern with a leading color,” says Linda Medina of Linda Medina Interior Design. To avoid a small space with graphic tile from becoming too busy, Linda pairs bolder selections with neutral tiles in interesting shapes. “Proportion is very important,” she explains. “Vary the sizes of the neutral tiles to create a pleasing and monolithic blend that marries well with the bold pattern.” (Note: Shower floors are not the place to experiment with oversize tiles. Keep dimensions smaller [Linda likes little hexagonal tiles] to minimize slips.) Here, a few of her favorite tile pairings—all available through European Tile Art:

• The Devotion Mariposa collection from Oceanside Glass in Carlsbad remains Linda’s go-to pattern when she wants beauty and drama in powder rooms or the backsplash behind a bar. “These tiles are both earthy and glamorous,” she says.

• Walker Zanger’s Kaza concrete collection (below) is both neutral and architectural. 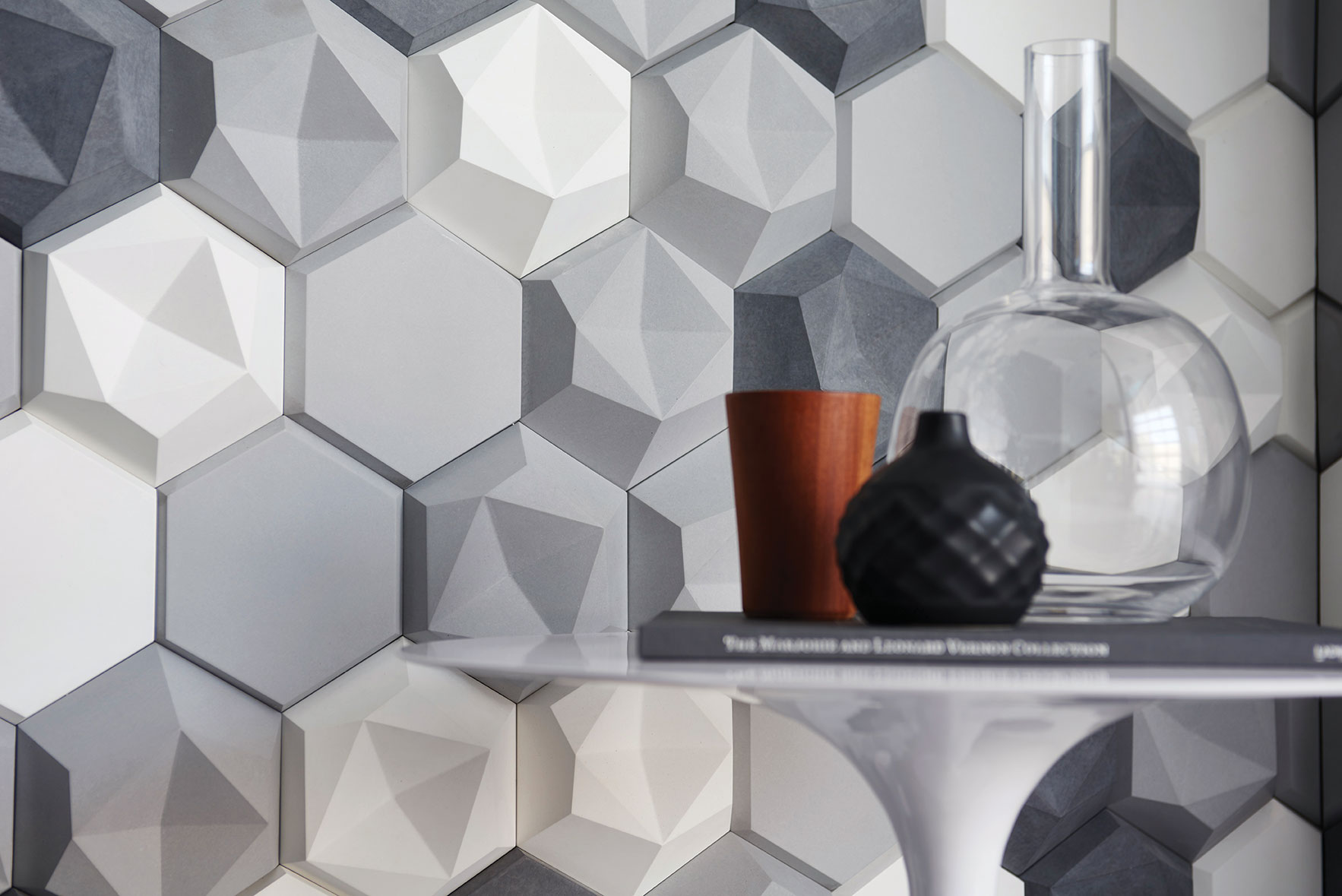