Homes of the Year 2019: Open-Living Makeover 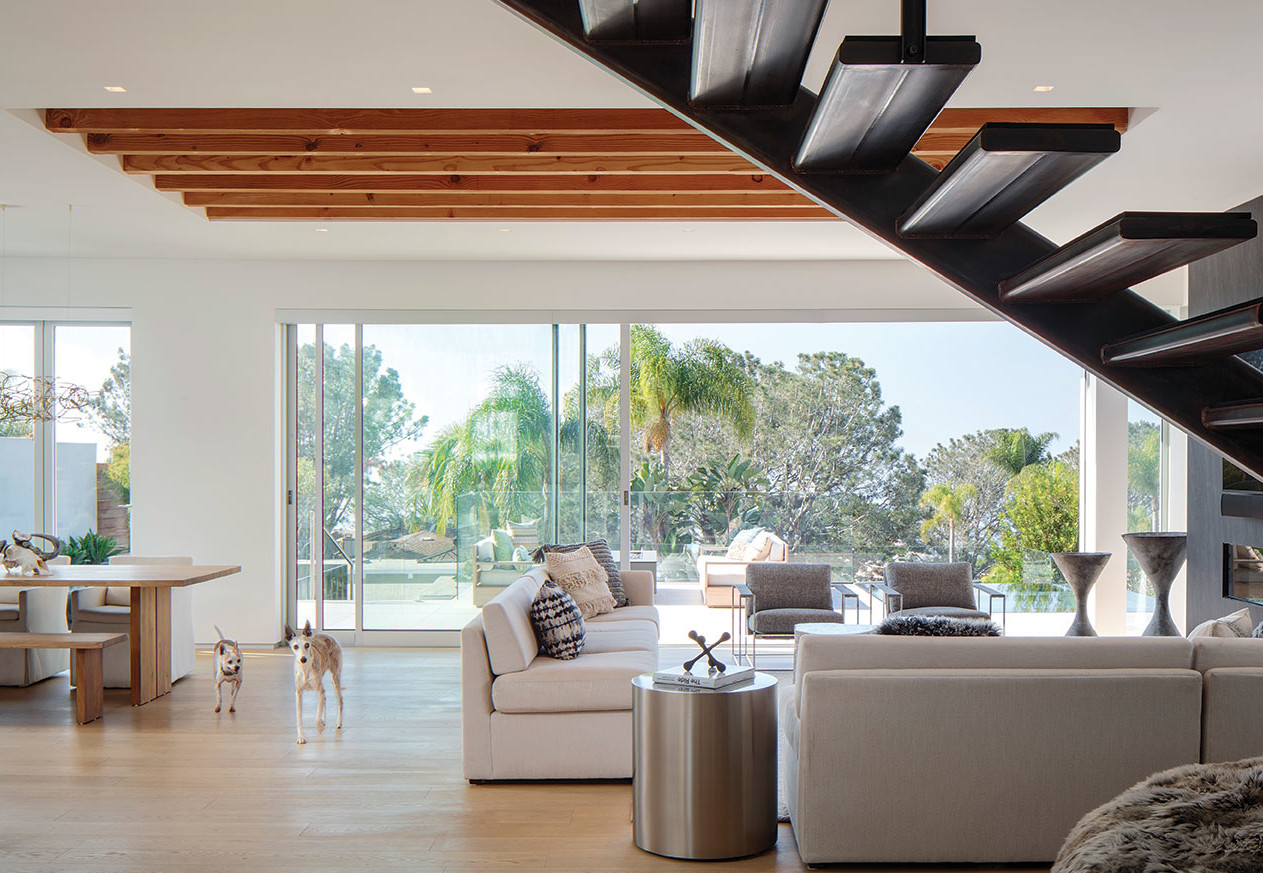 Just like the myriad shoes in homeowner Leigh Johnson’s closet that sit, ever so high, on stiletto heels, her and husband David’s lofty contemporary residence perches, ever so high, atop a hill, overlooking their Del Mar neighborhood’s Torrey pines and the Pacific Ocean at the village’s edge.

The shoes are for dancing what Leigh calls “feminine yoga” and she says they help her to “unleash her goddess.” And in a way, the house (which they share with their 15-year-old daughter Mallory and their trio of dogs) also can be viewed as having helped her unleash her goddess; the structure was a monumental remodel and the undertaking a great opportunity for her to gain some hefty experience in the architecture and interior design world. 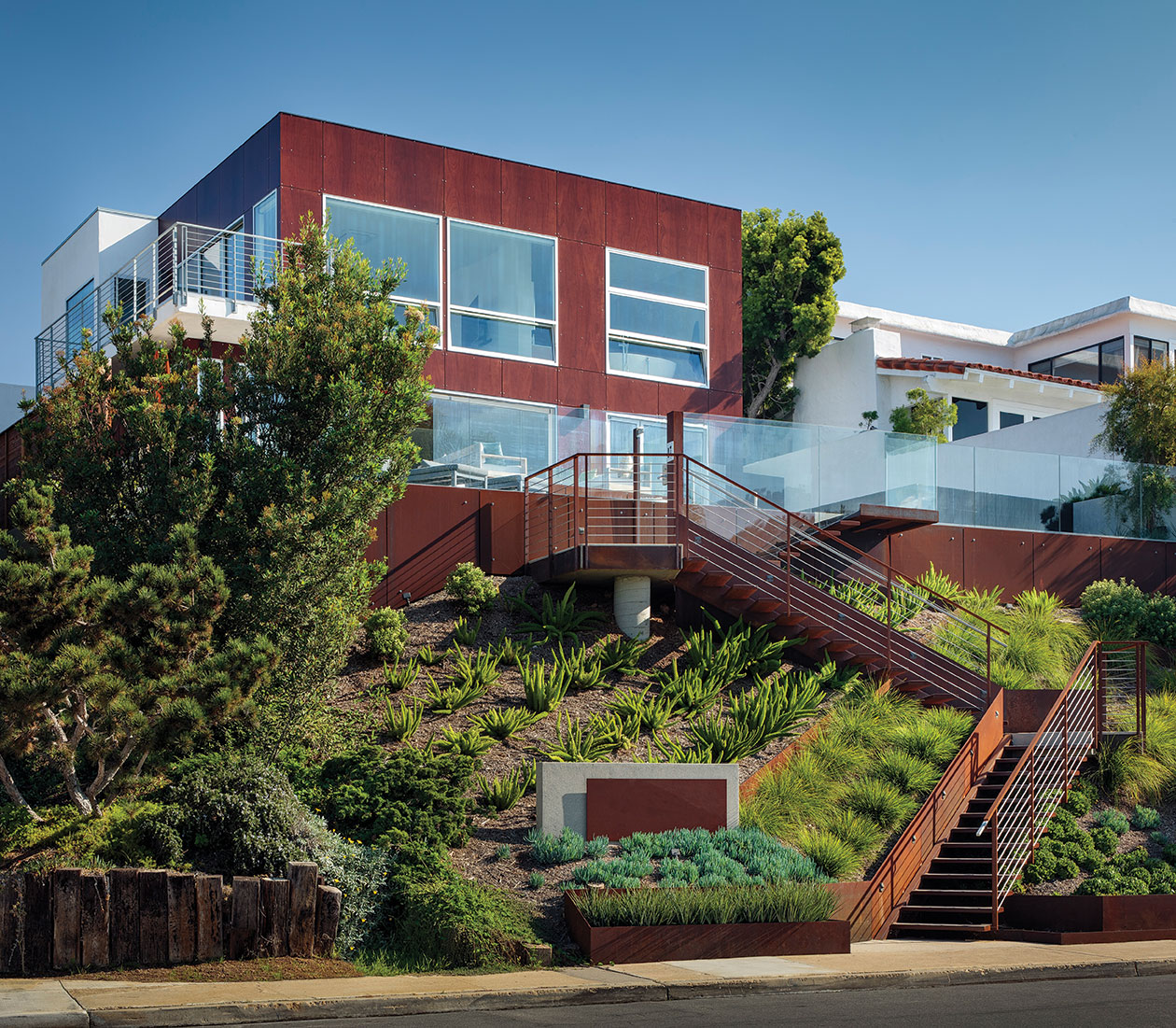 Eco-conscious panels grace the the exterior facade. “This material is a natural wood byproduct, so it’s not taking any trees down,” Aaron says. “It’s durable, and ties in with the Torrey pines in the area.” Photo by Chipper Hatter.

“Even before we started shopping for property, David and I were clear on our overall vision and what we wanted from our space,” Leigh says. “Luckily we have very similar taste and priorities, so we were drawn to similar kinds of materials and finishes. We both wanted a home of highest quality and craftsmanship with great attention to detail, and we were willing to sweat a lot of small stuff to customize to our needs and desires.” 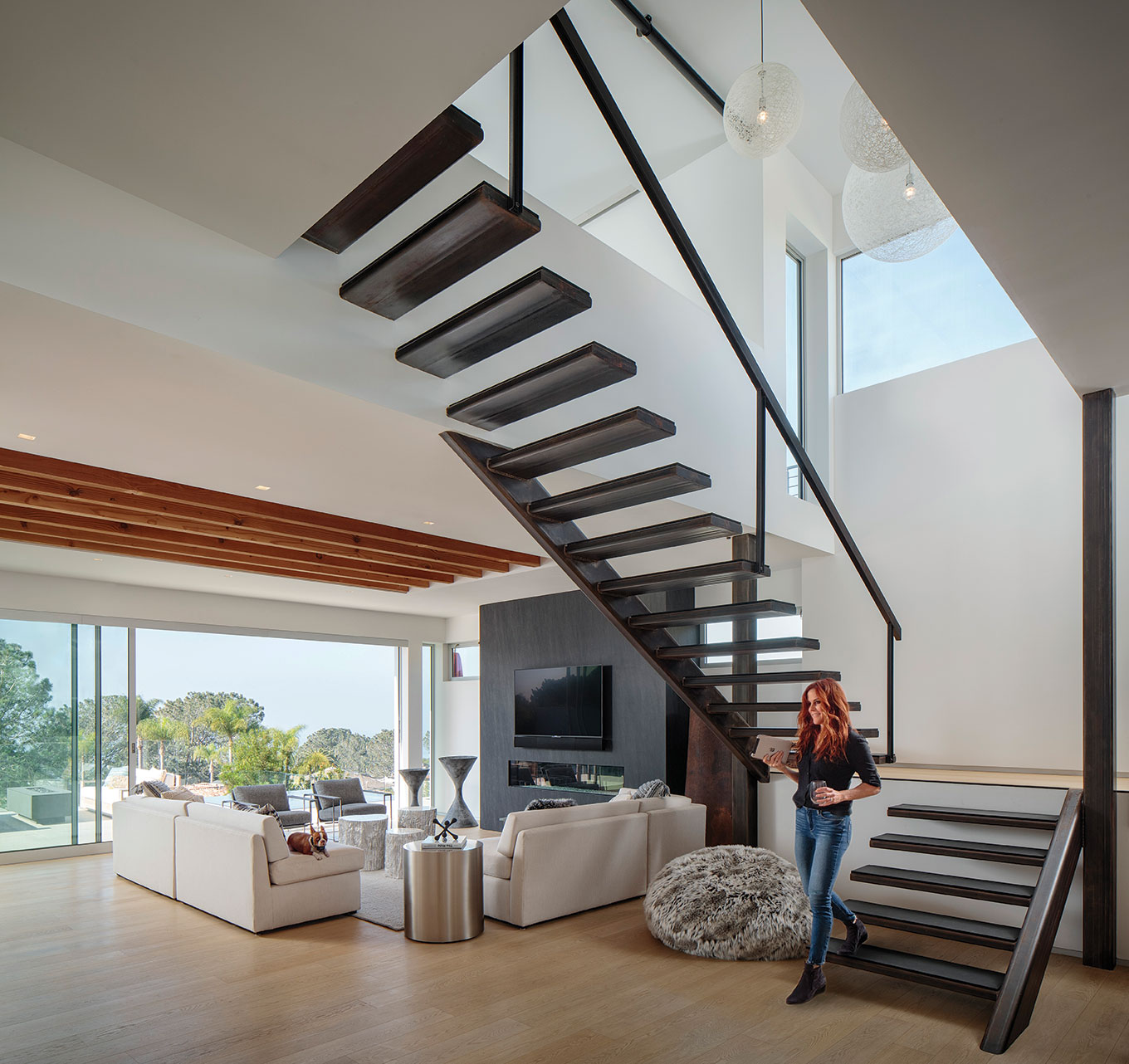 A slatted wood ceiling and imported Italian oak flooring add warmth in the living room. Leigh won’t slip on the floating staircase; the treads are made of rubber. Two support poles, integrated into the stairs, are completely unobtrusive. Photo by Chipper Hatter.

The house was a really bad ’70s remodel of what had originally been a cute, quaint beach bungalow. A rusted metal staircase with white paint peeling off the railings led to the front door. Inside, tiny, walled-off rooms existed on seven levels with random steps up into the living room, back down into the dining room and back up into the kitchen. The courtyard also had two different sets of steps, one that Leigh says, “made you feel like you were descending into a cellar to enter the house.” Although technically a remodel, essentially the whole thing needed to be razed and rebooted. 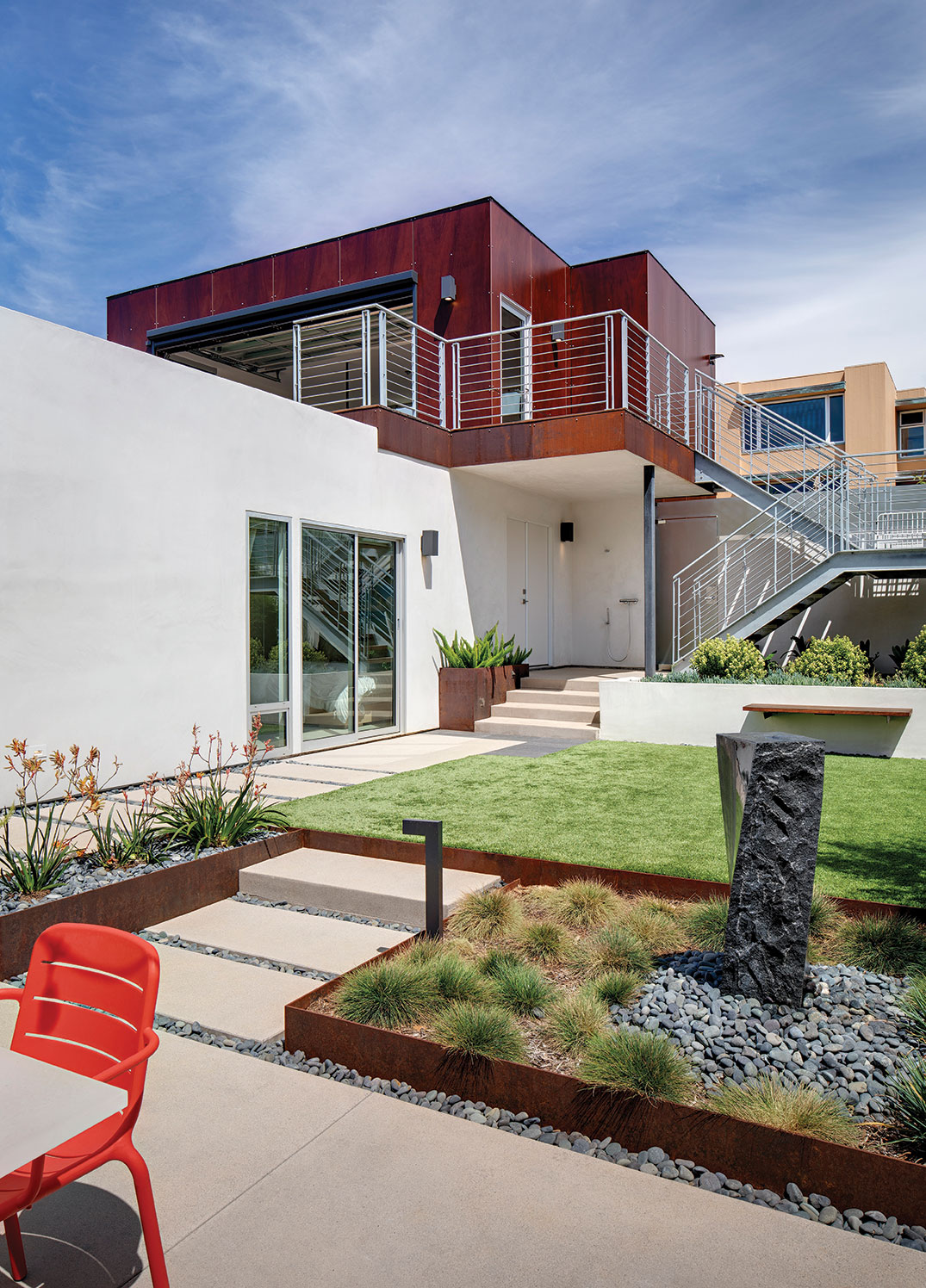 Sliding glass doors from the family room and Leigh’s home office lead to a courtyard. Debora Carl did the landscape design. Stairs lead to a gym atop the garage. Photo by Zack Benson.

“This was an enormous project that I knew would demand a lot,” Leigh says, “but I was excited for the growth and learning journey. As an executive coach, I knew I wanted an environment that would enliven and awaken the senses. I knew the core energetic feel we wanted the home to have: rough and smooth, elevated and grounded—a simultaneous experience. We had to find an architect who would get that.”

Enter Aaron Anderson of Studio Anderson, who also admits that this was the biggest house he’d ever designed. “Most houses I’ve done are secluded, eco-conscious Zen spaces, but this house had to be that and work on other levels too,” he says. “David and Leigh have an entertainment lifestyle, primarily with their large family who live in the area and, secondly, with a wide friendship network. They also use the house for work functions. Important too, Leigh wanted a space that would be uplifting and bright, with a sense of stillness and a connection to nature.”

In the rebuild, which became a trio of joined-together cubicles, that essence begins at the sidewalk’s cantilevering stairs, which meander like a beach trail leading to the house. With a little imagination, walking them can be likened to hiking along the Torrey pines cliffs in a progression of layers that takes you up through a “canyon” of water-wise landscaping (done by Debora Carl) to the ocean view at the top. Without breaking the spell, the doorbell sounds like a little bird singing a sweet tweet of welcome.

When the gate opens, water flanks the front courtyard pathway with a hot tub on one side and a vanishing edge pool on the other—a symmetry of water that looks like smooth glass. Water also flows underneath a bridge that’s an overpass to the entry. 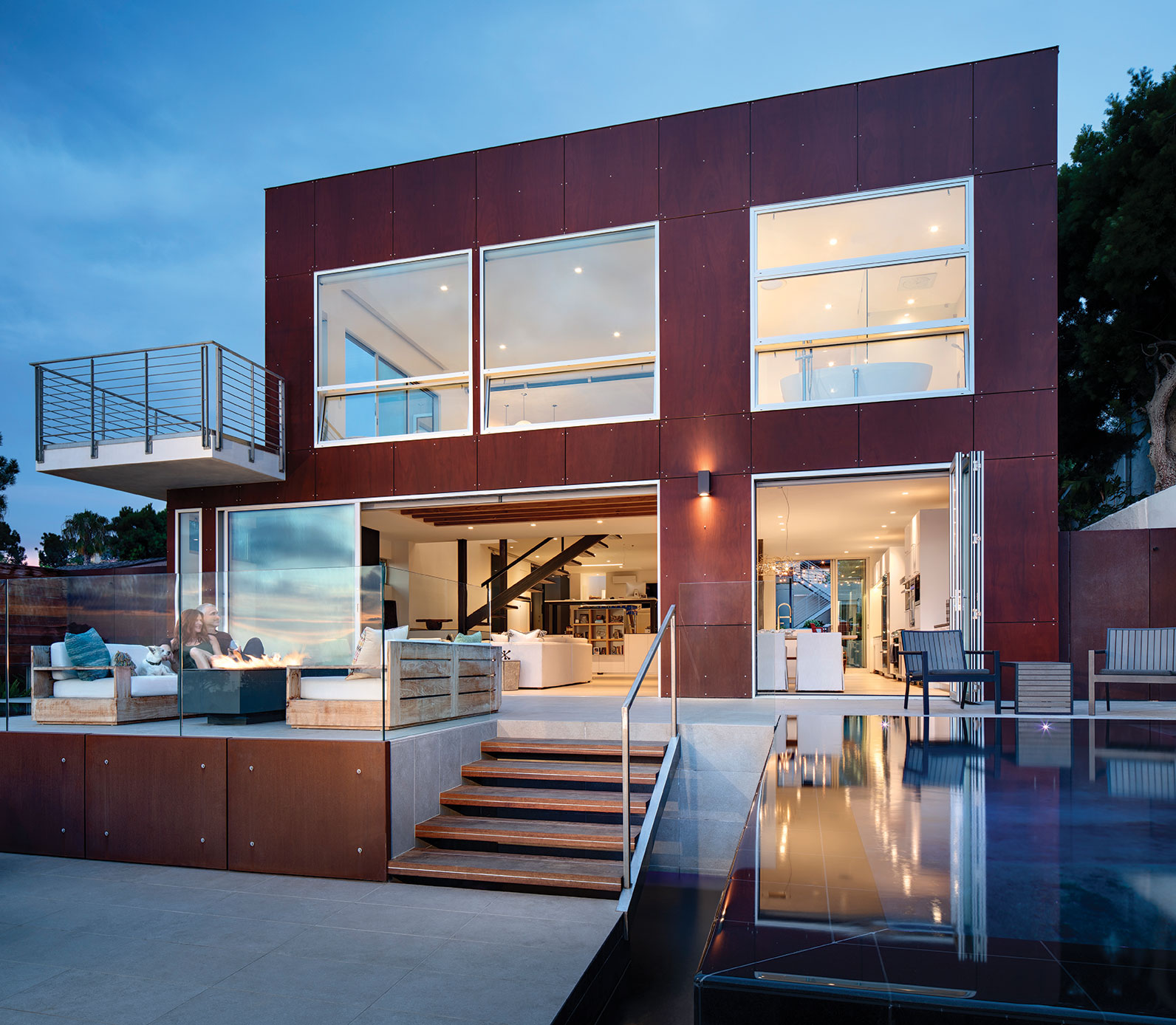 Leigh and David relax by the fire pit on the front deck of their home—a tranquil indoor-outdoor open living oasis that’s comfortable and inviting. Photo by Zack Benson.

Inside, a sweeping great room with French oak floors the color of sand and backsplash walls the color of ocean mist celebrates the natural world seen just outside the extensive panes of glass. The dark gray ceramic tile surround of a 10-foot-wide fireplace in the living space mimics the surround of the remote-controlled fire pit of the outdoor lounging area between the water features. The kitchen and dining spaces behind the living area are perfectly placed so that, through glass doors, they easily access the pool on one end and the inner courtyard—set up for dining al fresco—on the other.

Leigh’s vision for her state-of-the-art home was clear but to bring that vision to reality she enlisted designers Andrea May and Megan Bryan.

“Because Leigh and David have large events, the home needed to function well for entertaining,” Megan says. “People tend to bunch up, gathering in the kitchen or bar or they get backed up in the entry hall. The goal was to activate the perimeter and make sure people would spread throughout the space. For example, the kitchen is centrally located, but the dining table was in the middle of the main living space. By moving the dining table closer to the glass doors, it not only provided an open space between the kitchen and living room for people to mingle but it also provided an indoor-outdoor dining area.” 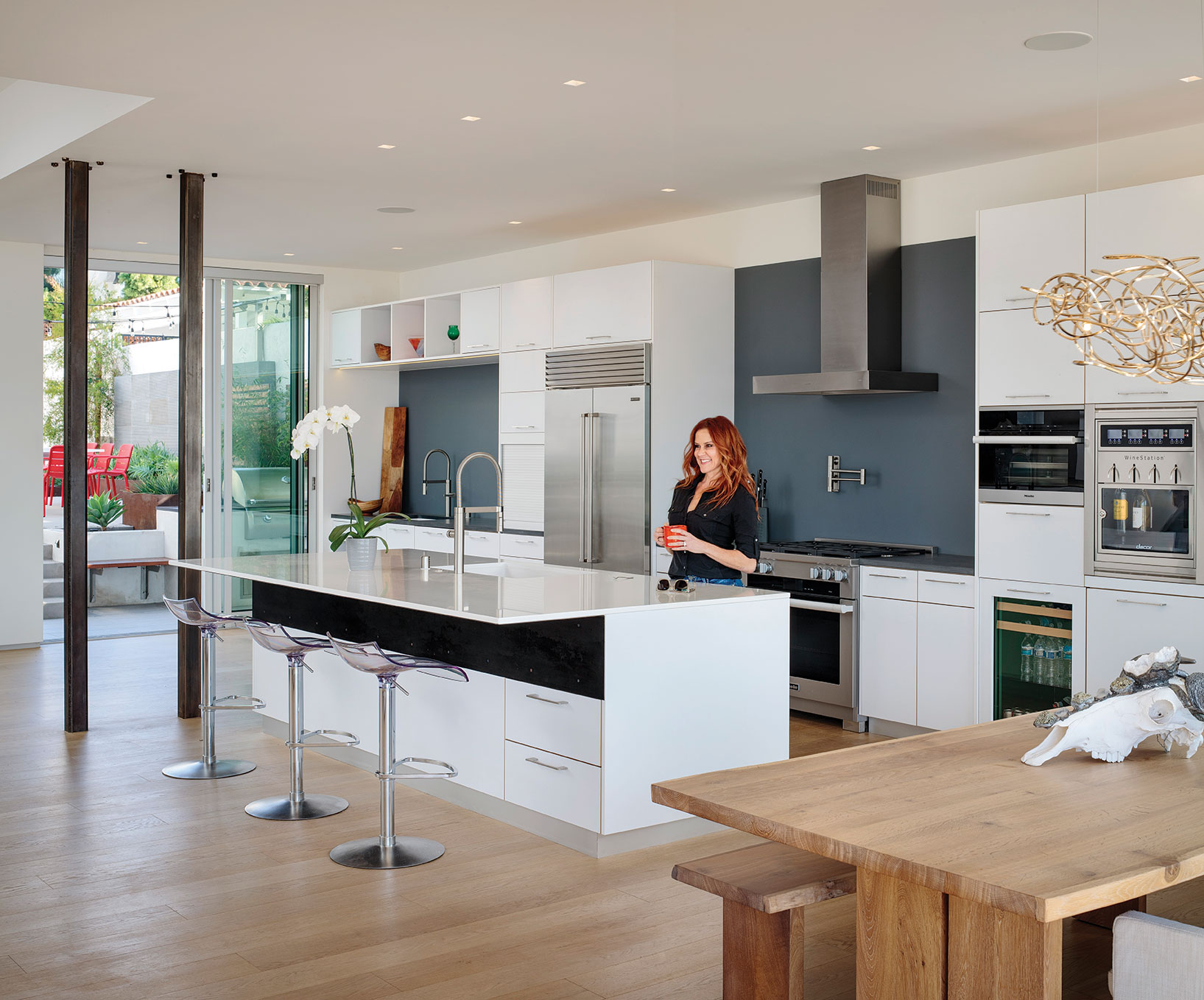 Leigh makes a cup of tea on the island’s wide, cement-fiberboard countertop; the HVAC system hides behind cabinets atop the fridge. Photo by Chipper Hatter.

Without doubt, the core of the airy interior space is the floating staircase smack-dab in the home’s center. Its placement was David’s decision.

“I wanted a floating or cantilevered staircase,” Leigh says, “but I just knew that if we put it in the middle of the house, it was going to curtail the main level’s flexibility. I might have put it nearer the wall, but David was strong about where he wanted it placed and Aaron was on board. Now it’s like a sculpture for the house and, because of its placement, everywhere your eye goes there’s this piece of art.”

“The stairs make the statement for the house,” Aaron agrees. “They look ethereal, as though they are disintegrating as they rise up to the sky. You experience the same feeling that you do outside—the feeling that you are hovering over the landscape.” 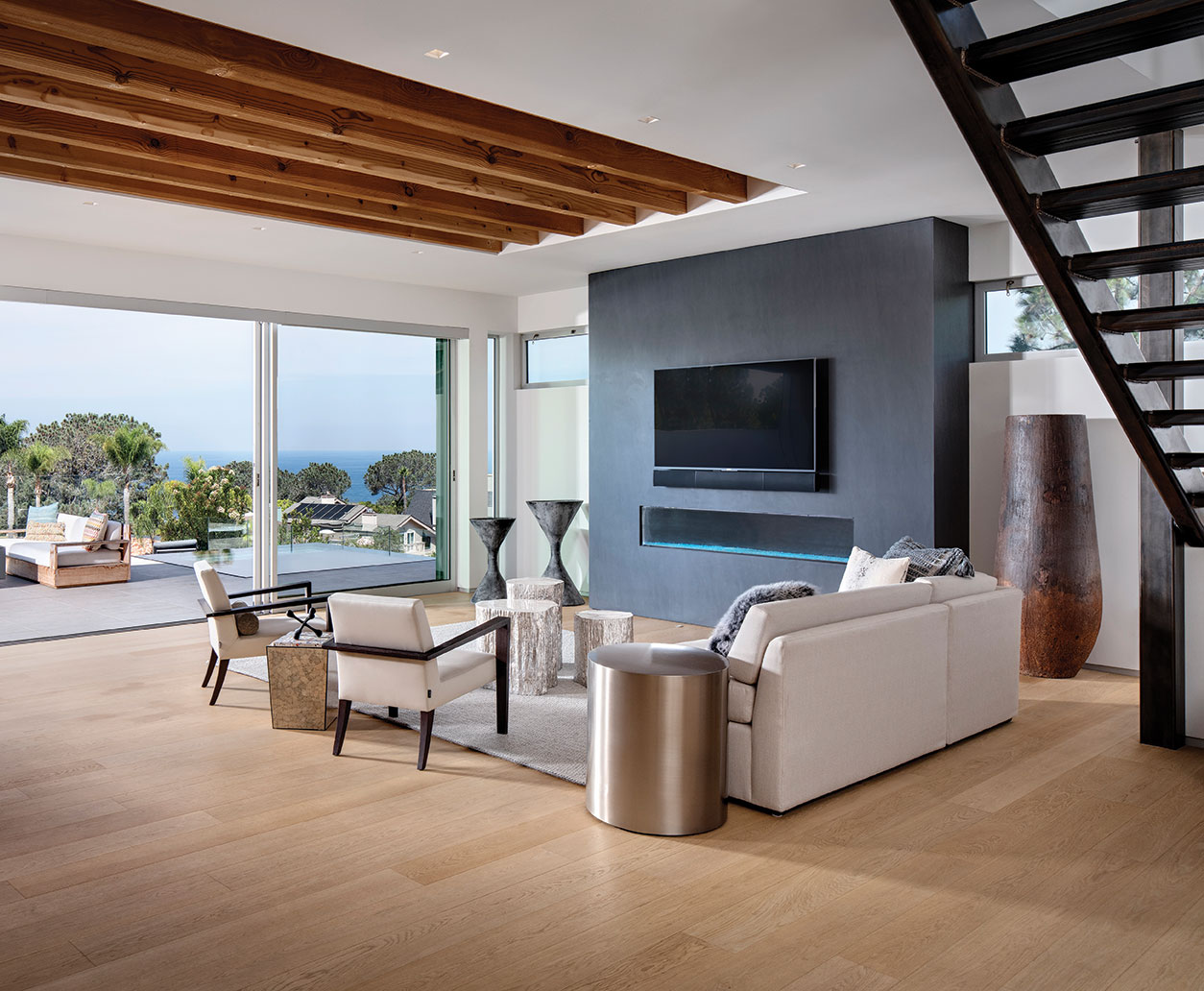 The ocean view from the vast, open living room. Photo by Zack Benson.

At midlevel of the tri-level house, the home office and playroom are one big space. Glass doors lead to the interior courtyard on one end. At the other end, a long hallway leads to Mallory’s large bedroom suite—what was once the home’s master suite. The hallway wall boasts 15 feet of sliding frosted-glass doors that hide a powder and laundry room.

At the top level on the west side of the stairs, lives the new master bedroom suite with its ocean view. On the east side, a yet-to-be-determined space sidles next to a huge walk-in closet that wraps back to the master bathroom. 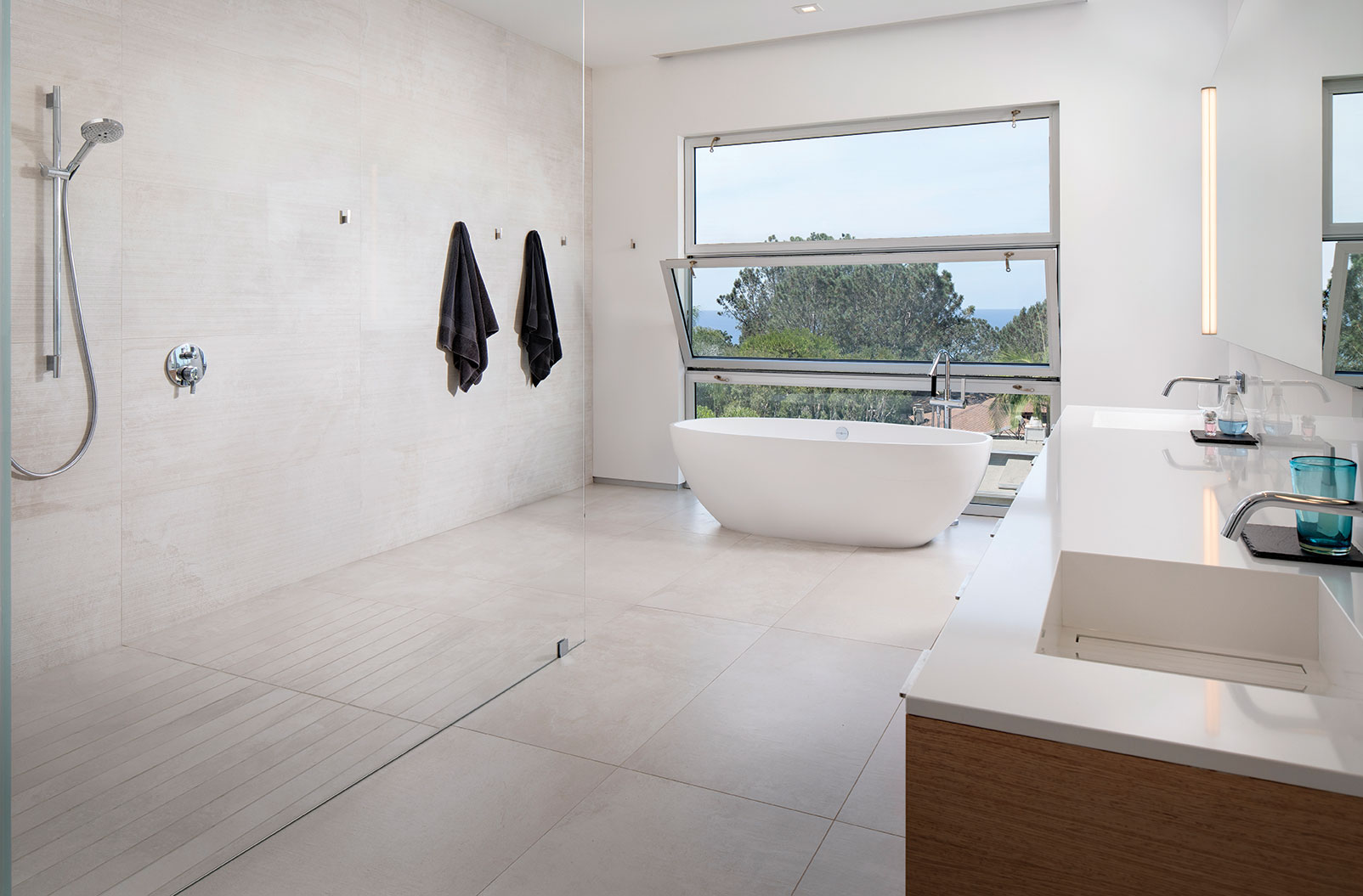 “No bathrooms hold a candle to our master bath,” Leigh says. “I never want to go to a hotel anymore.” Photo by Zack Benson.

“For the master bedroom, instead of creating rooms, we took doorways and walls out, opening it up as much as possible to provide a sexy master suite experience,” Megan says.

“At the bottom level, you feel more grounded as you look through a tree canopy,” Aaron continues. “At the more intimate top level, ceilings are tall, it’s lighter and airier and more about the sky.” 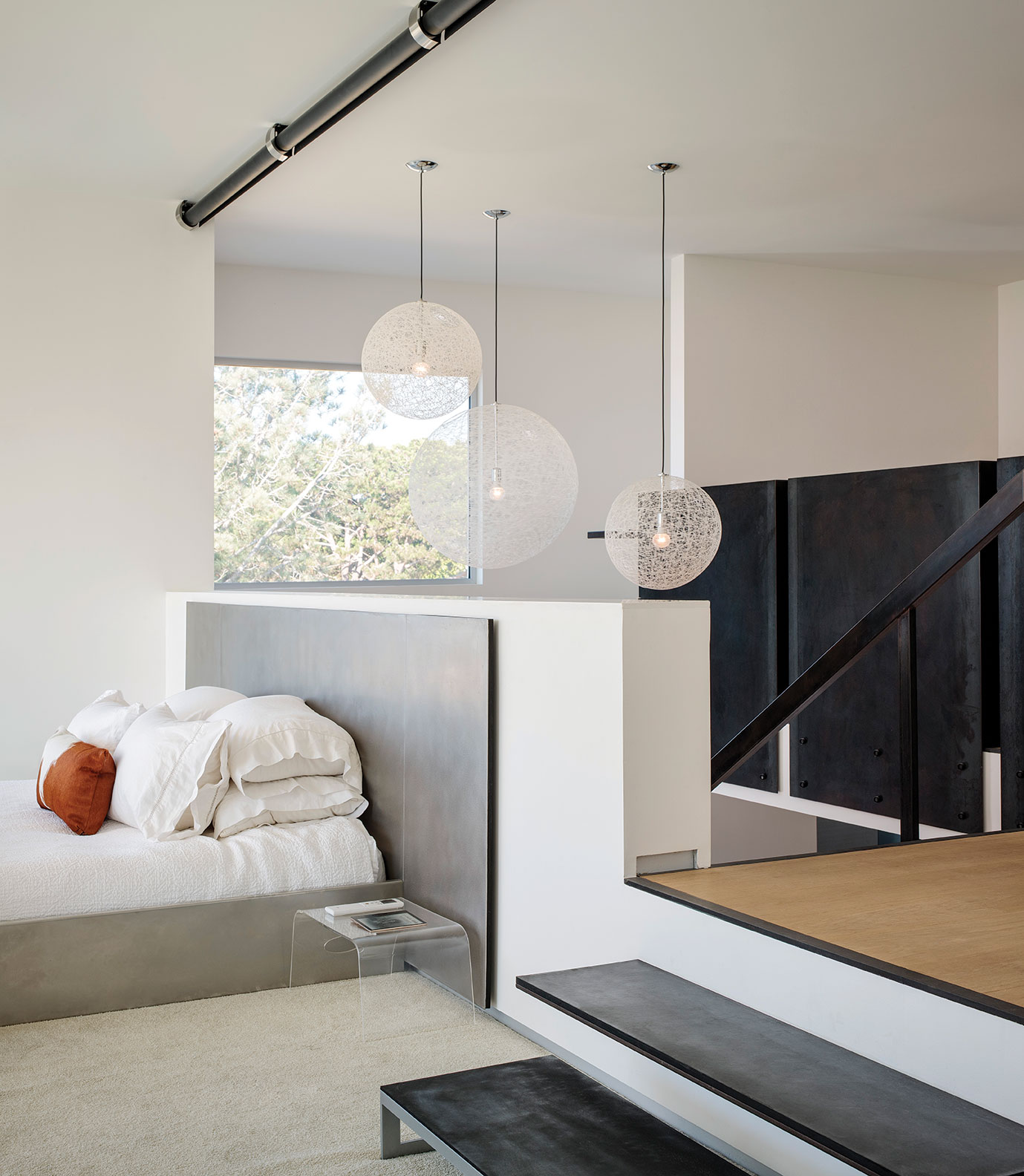 Instead of creating rooms upstairs, doorways were eliminated for open living. Steps leading into the master bedroom mimic the main, floating staircase. Photo by Chipper Hatter.

A door at the top level goes out to what will be a meditative space on the roof that ends at the garage’s second floor—added to make a gym for Leigh.

“I couldn’t believe we were designing this amazing house and there was nowhere for me to move my body,” Leigh says. “Health and movement are such a part of my life. When I was younger, I was in Paris on a work trip and got hit by a car crossing the street and spent years going through rehab. So taking care of my body and moving my body are important to me. Early on in the project design, we were up on the roof and saw we had that ocean view from there. I said, ‘We have to do something up here.’ And my husband responded, saying, “Maybe we can add some square footage over the garage for a gym.’ We both agreed that I’ve ended up with one of the most gorgeous home gyms ever.”

And maybe one of the most unusual as it contains her dance pole. Now Leigh dances and works out in an idyllic aerie above the trees while she looks out to the sea. But you don’t have to be in the gym to get that intimacy of being one with nature. 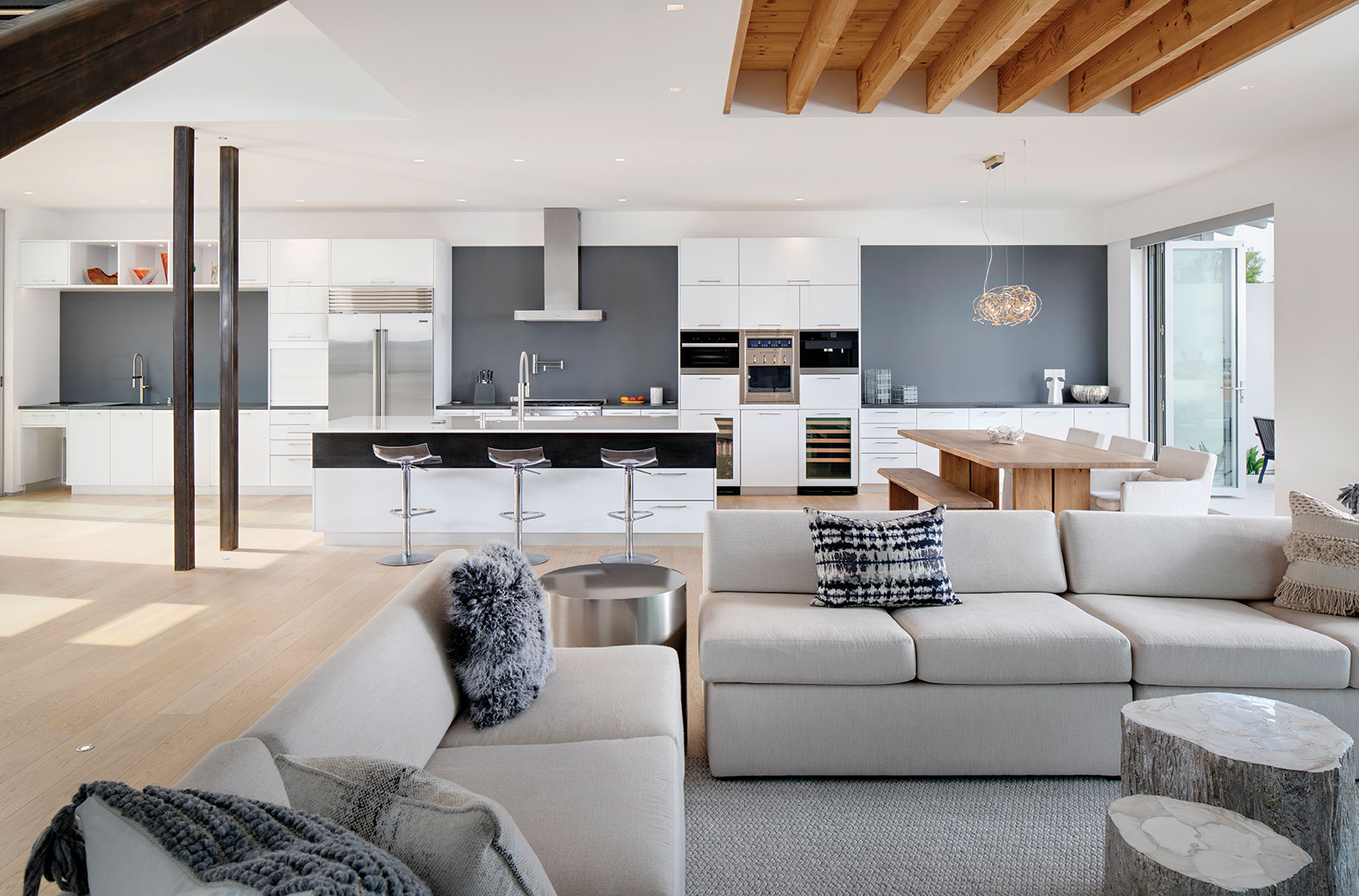 “The house looks simple, but it took a marvel of engineering to make the kitchen, living and dining room—which were separate tiny rooms on two different levels—all one, wide-open, level space,” Aaron says of the house’s design for open living. Photo by Zack Benson.

No matter where you are in the house, that presence of the Torrey pines and the ocean can be felt. The relationship between the house and the natural world flows as easily as the water in the home’s vanishing-edge pool.

Leigh fell in love with many of the materials (aluminum, steel, acrylic, stone and tile) she chose in her remodel and found a variety of ways to repeat and reuse them to give her home a sense of unity. Check out her advice on repeating materials here.

Categories: Home Design, Home of the Year
Share this...