From Balboa Park to the Wild West, one gardener treasures themes in a motif landscape 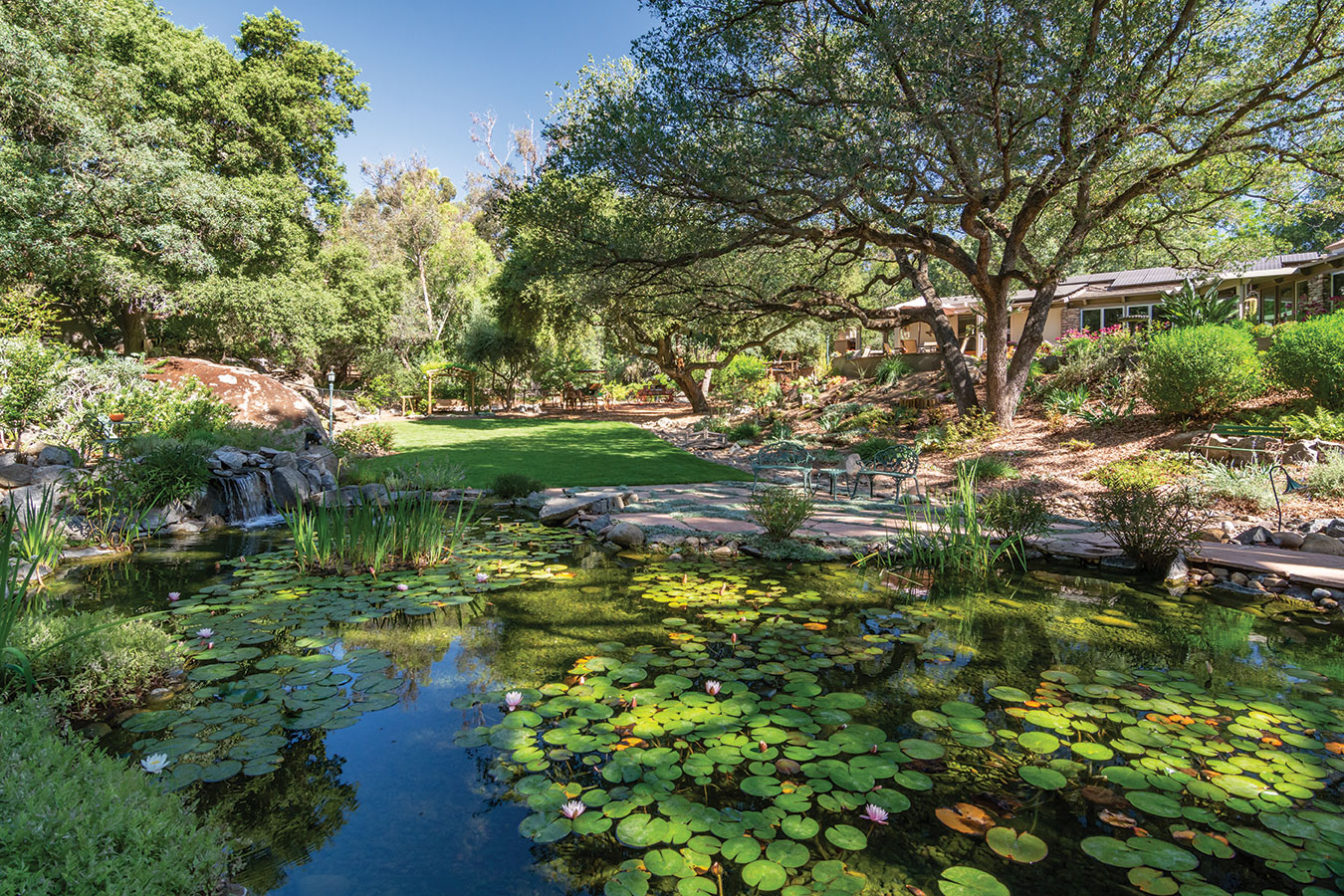 A tranquil koi pond offers a meditative respite from the shenanigans of the wild, wild West in the Tewksbury’s garden.

Almost every day, from dawn until what Jim Tewksbury calls “beer-thirty,” he works around his Alpine garden. Now and then, when curious passersby stop to admire the front yard’s majestic Engelmann oak or its two antique farm wagons, he’ll pause to invite them on a “nickel tour” of the grounds.

“First we walk through ‘Balboa Park,’” Jim says, pointing to the Koi pond and manicured lawn shaded by towering trees and rimmed with boulder-studded slopes, dry streambeds and tumbling waterfalls. “Then,” he says with a smile, “we go to ‘Old Town.’” 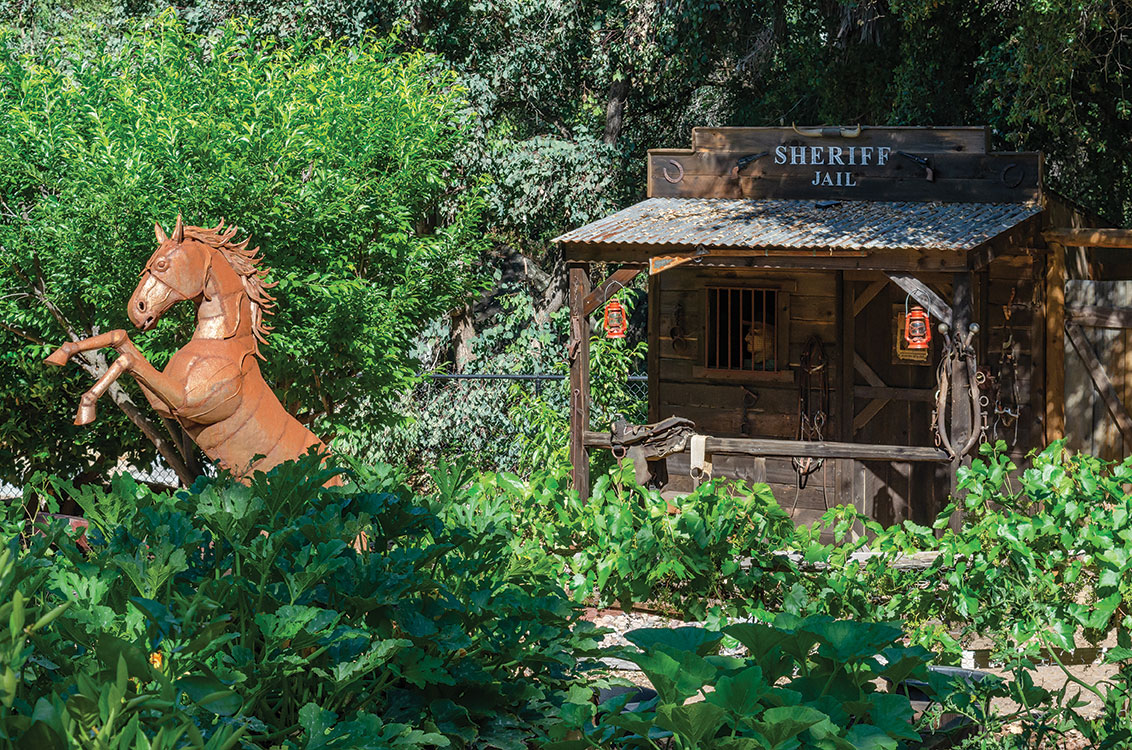 The backyard’s metamorphosis began at the jail house — a modified lawnmower storage shed.

Gasps generally greet this turn into the backyard where what could be a John Wayne movie set comes into view. A rustic Western town—from jail to general store, gussied up with weathered wood and Old West memorabilia—frames an edibles garden where an antique windmill whirs in the breeze. 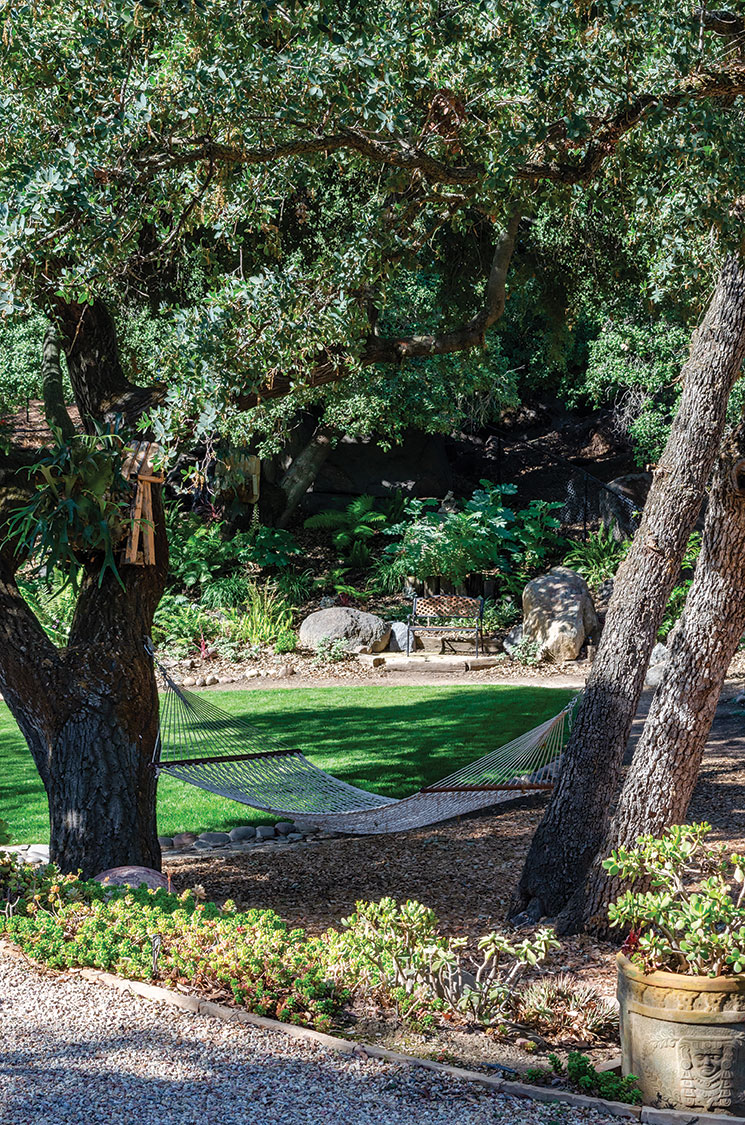 Oak trees provide a shady spot for hanging a hammock.

“Most people like to carry a single theme through their landscape,” the retired civil servant says. “I like more. It’s like having many yards in one.” And his sprawling landscape definitely has split personalities.

Last July Jim welcomed an unlikely group of garden visitors—sheriffs and firefighters battling the West Fire raging just two blocks away. “One day 15 were in the backyard eating lunch, enjoying the shade,” he says. “They did a phenomenal job keeping Alpine from burning to the ground.”

The property’s inspired makeover got underway three years ago after Jim and his wife Marlene, a business manager, purchased a 1970s-era ranch home angled to overlook an acre dotted with two dozen mature trees. The couple relishes back-country living; but after 12 years, Santa Ana winds that lashed their mountain-top Descanso home finally drove them to move a bit westward. “We like Alpine’s small-town atmosphere, the peace and quiet,” Jim says of their new community at the edge of the Cuyamaca Mountains.

Previous owners dug a well and added the home’s rear flagstone patios and pond, but the lawn was riddled with crabgrass and circled with bare or overgrown slopes. Closer to the home thousands of bulbs crowded beds, leaving behind mounds of brown foliage after their short-lived flowers faded—a look Jim disliked. In the backyard a few fruit trees struggled and a lone storage shed stood on bare dirt. 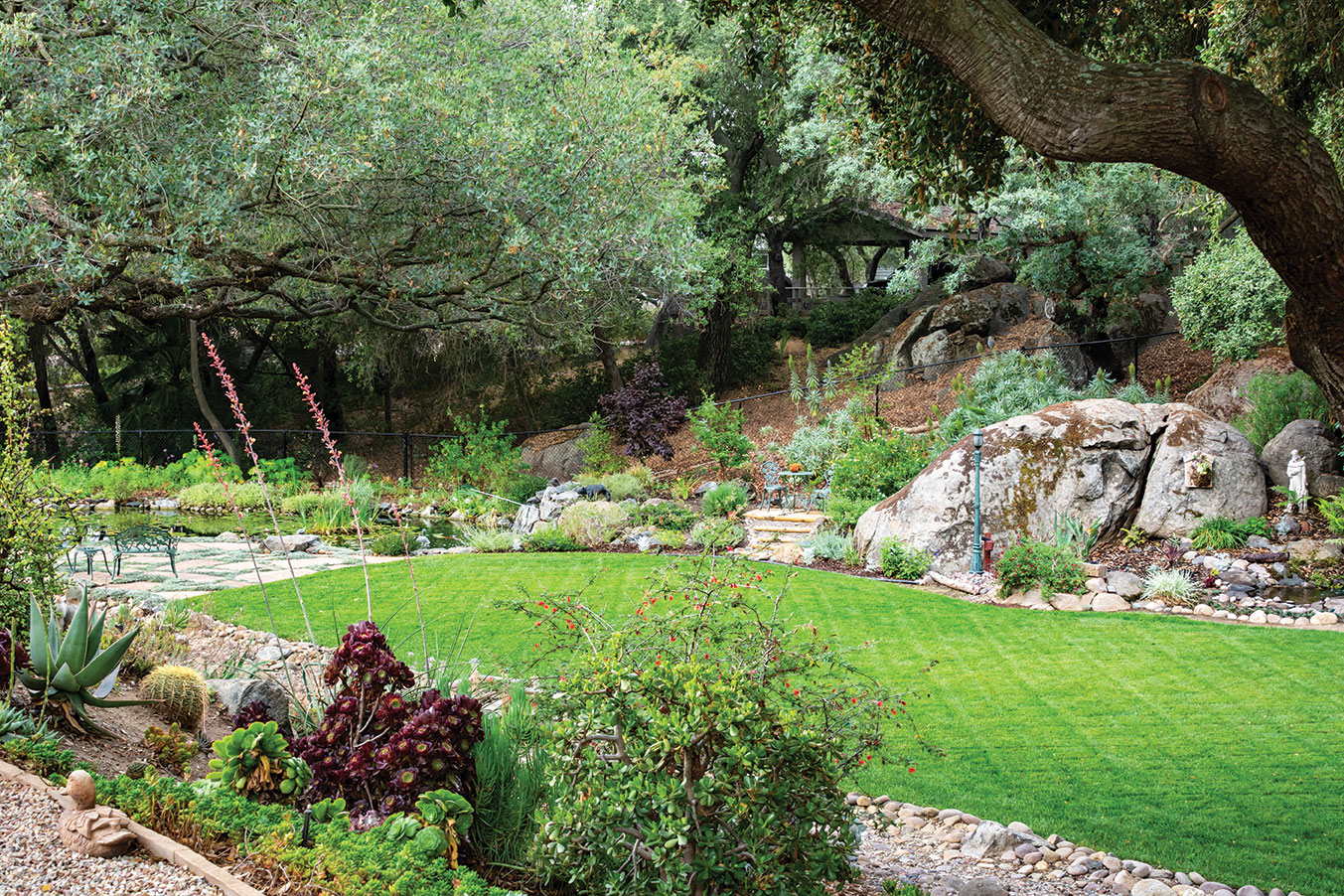 Early on, Jim added patio covers and rebuilt the outdoor fireplace in what is now his al fresco “man cave” marked by a moonshine jug on the mantel. He and Marlene, along with buddies from Descanso and new Alpine friends, “spend 80 percent of our time outside,” Jim says. “We have our own little micro-climate here, so it’s always a little cooler than in other parts of town.” 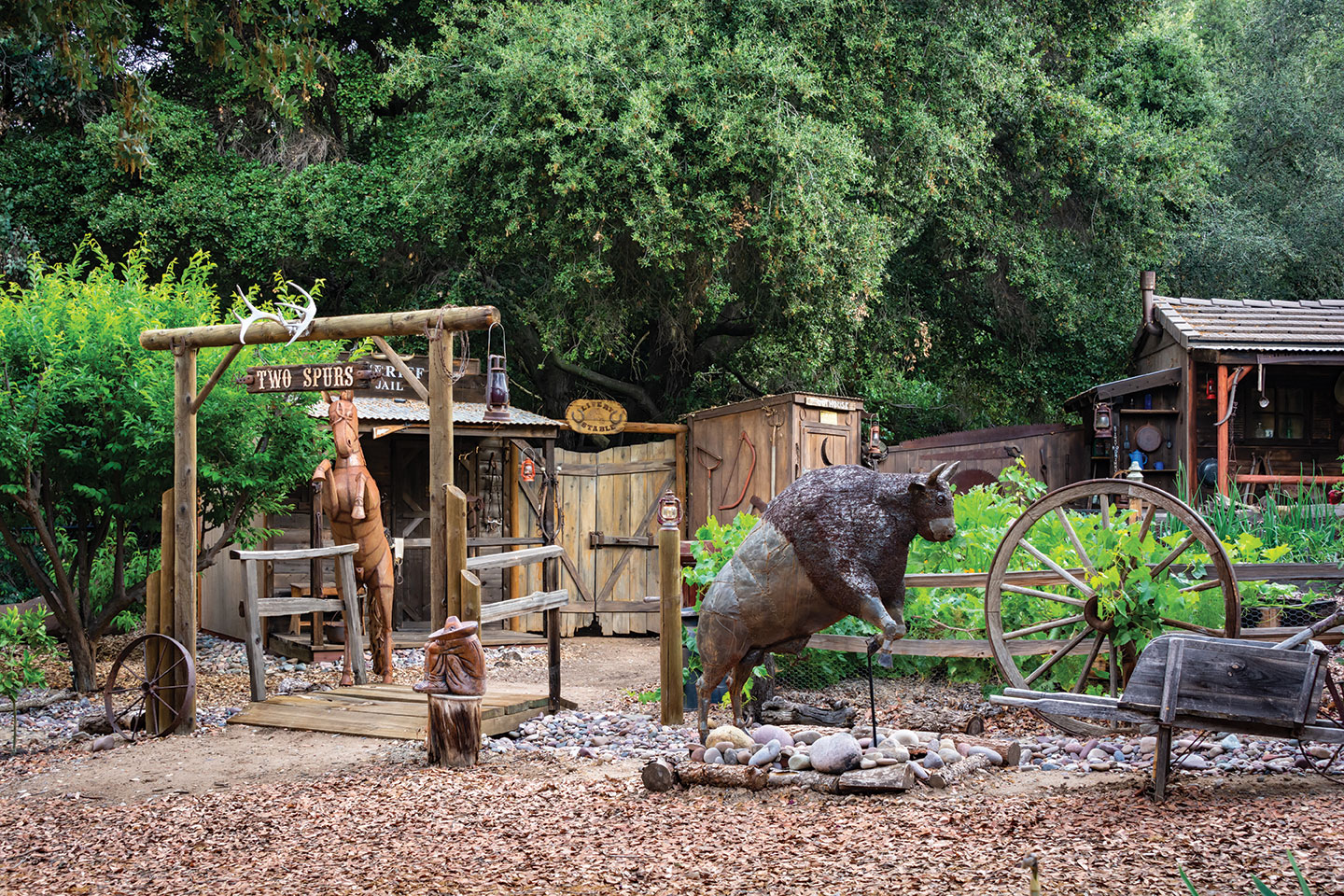 The “Two Spurs” ranch and its outhouse (a garden shed) have a comfy, sequestered spot near the burgeoning orchard. A buffalo seems to be enjoying the produce from the veggie garden.

From this perch, views through a scrim of long-limbed oaks stretch down a gentle slope and across an oval lawn, now a pristine swath of tall fescue. On the opposite bank, Jim carved a recirculating waterfall, jumbling boulders and tossing branches around the stream he runs 24-7. “I like a natural look,” he says. “That’s why I use oak leaves and pine needles as mulch. They’re beautiful.” 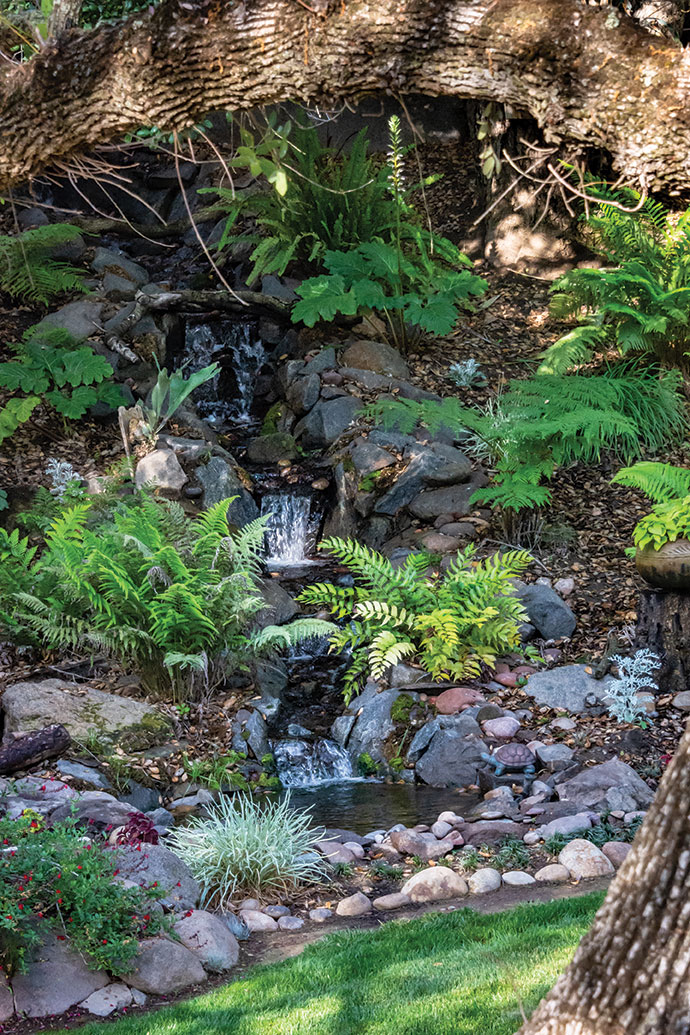 Ferns look as though Mother Nature herself planted them along the recirculating waterfall Jim created.

Plants starting to carpet the slopes range from ferns, philodendrons, dusty Miller and colorful coleus in the deepest shade to sages, ornamental grasses, lavenders, phormiums and succulents in sunnier spots, where bulbs were dug up and discarded. A new favorite, ‘Orange Peel’ jessamine, prized for sprays of sweet-scented flowers, stands next to a truck-size boulder where one of the garden’s many staghorn ferns is mounted and a benevolent St. Francis statue stands watch.

Dozens of jewel-toned koi now glide in the pond where a cover of water lilies and two underwater “caves” protect them from predators. Needles often drift across the water and adjacent patio from a nearby pine that soars more than 50 feet high.

“The son of the first owner told me his family planted it in the 1970s. It was their Christmas tree,” Jim says.

Transformation of the dusty backyard began when Jim decided to “modify” the lawnmower storage shed, turning it into the jail in the faux frontier town he calls “Two Spurs.” There, a forlorn prisoner—actually a stuffed Halloween mask peering out between bars and a “wanted poster”—charges one of Jim’s nieces with “cuteness violations.” 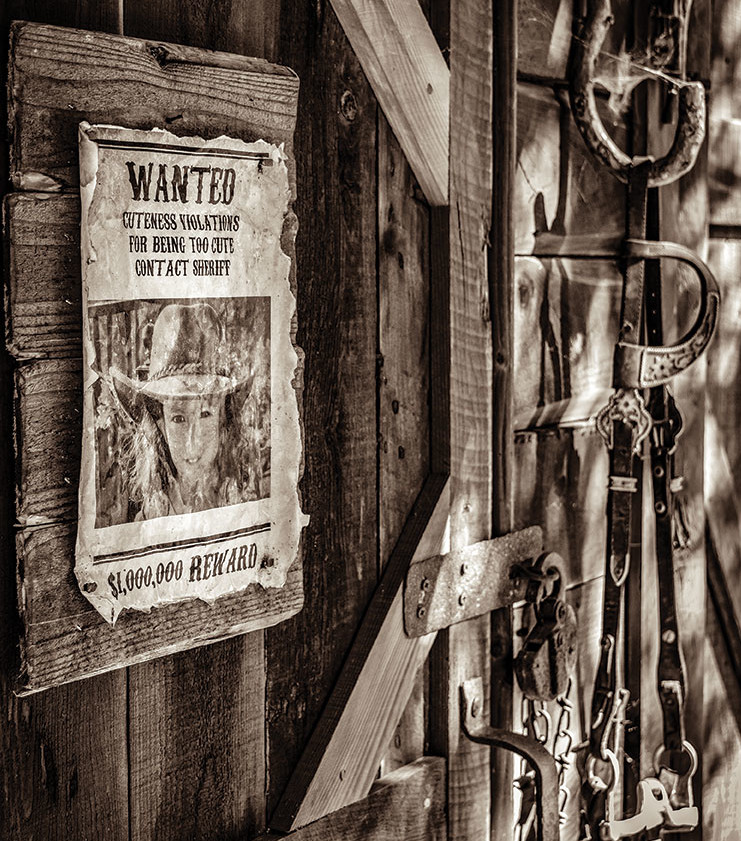 There’s a $1 million reward for anyone who turns in Jim’s niece. She’s in trouble with the law for being too cute.

With more storage needed for garden tools, the so-called “outhouse” was added, connected to the “jail” by a wooden gate once part of an Old Globe Theater set. A large workshop was built, big enough to have three signs, which label it as the Blacksmith, Cantina and General Store.

All the buildings are topped with tin roofs Jim aged and entered via side doors, leaving the front façades as galleries for his collectibles and homespun humor.

“I’ve always been into Western. I just love it,” says Jim, who scours Craigslist, swap meets, garage sales and antique shops around the Southwest for riding gear, ranch implements, mercantile signs and more. His finds are added thematically—rusted handcuffs at the jail, garden tools around the edibles, a spittoon outside the Cantina.

“Sometimes folks think I’m crazy, like when I wanted to put a metal buffalo sculpture on the general store roof,” he says. “But I could picture it in my mind and when they finally saw it, everyone loved it.” 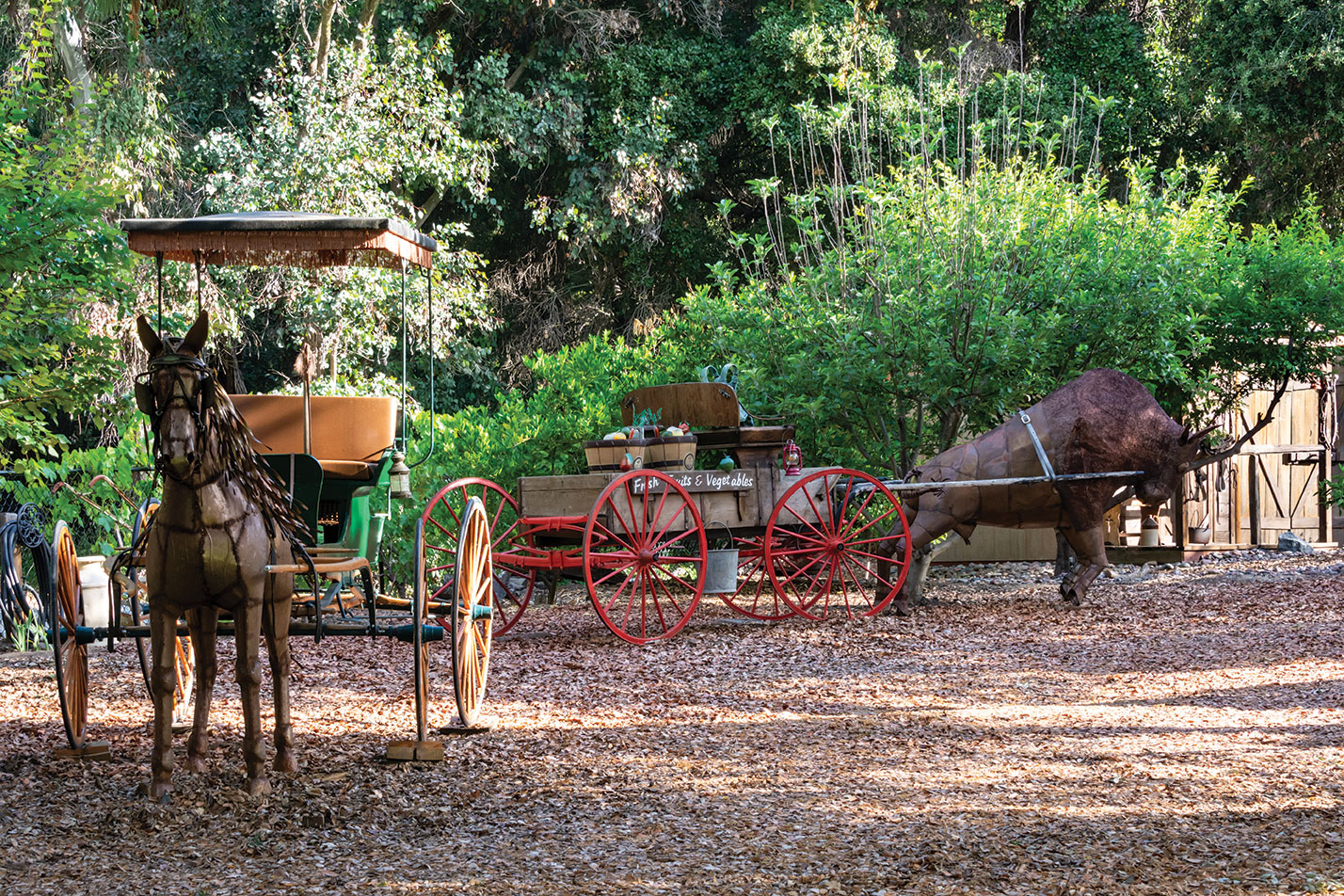 Large metal horse sculptures and wagons were made in Mexico.

Larger collectibles—a buckboard, wagon and rusted metal horse sculptures made in Mexico—are sheltered nearby under a now-thriving orchard. 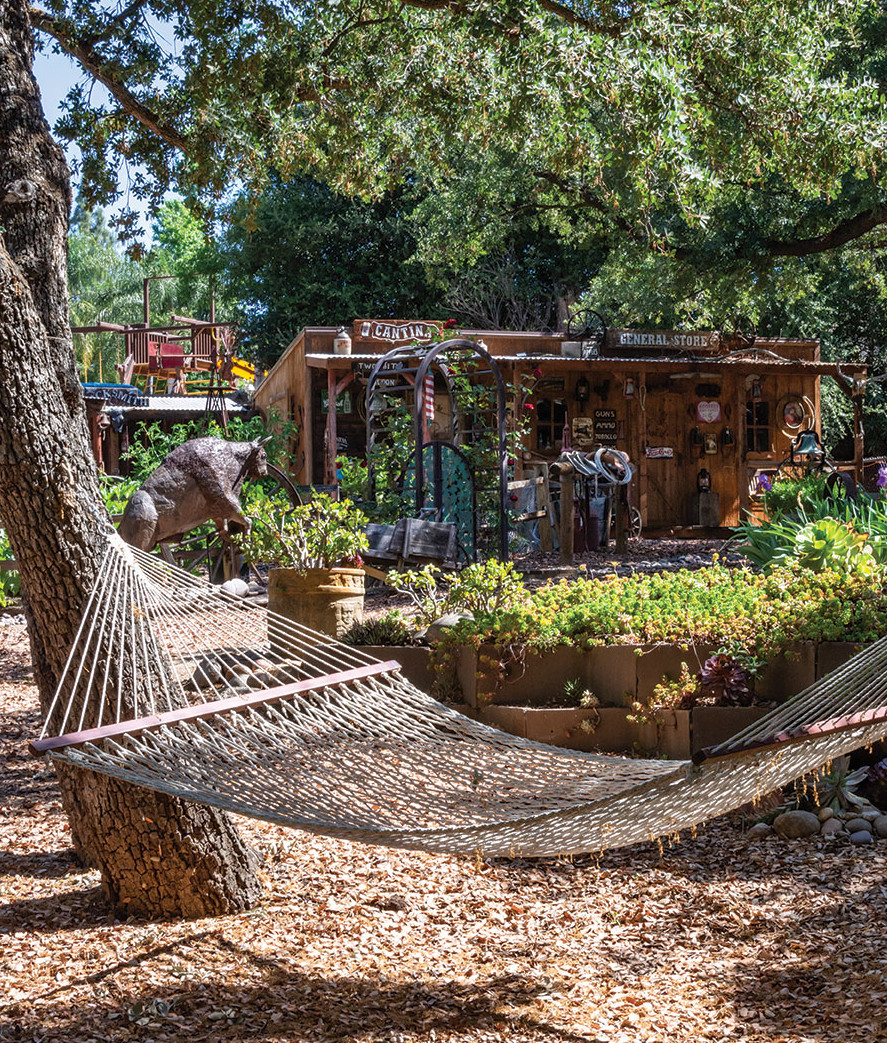 The cantina and general store actually make up an oversized workshop, which is entered through side doors.

When a neighbor’s horse whinnies and the sun slants toward “beer-thirty,” it’s easy to imagine the place coming to life with townsfolk, gunslingers and too-cute cowgirls.

While he’s tucked a hammock, benches, a wisteria-covered swing and other seating around the garden, Jim rarely stops to relax. “I don’t have time,” he explains.

Recent renovations in the front yard include planting more of the roses his wife loves, staging new wagons adjacent to the circular driveway and adding a waterfall above the pond.

“I’ll never be through with this garden. It’s lots of work…and lots of fun,” he says. “If I ever finish, we’ll sell. And I’ll just start all over again.”