Homes of the Year 2019: An Italian-Inspired Dream

They came, they saw, they recreated: An Italian home design perched amidst sweeping views in San Diego 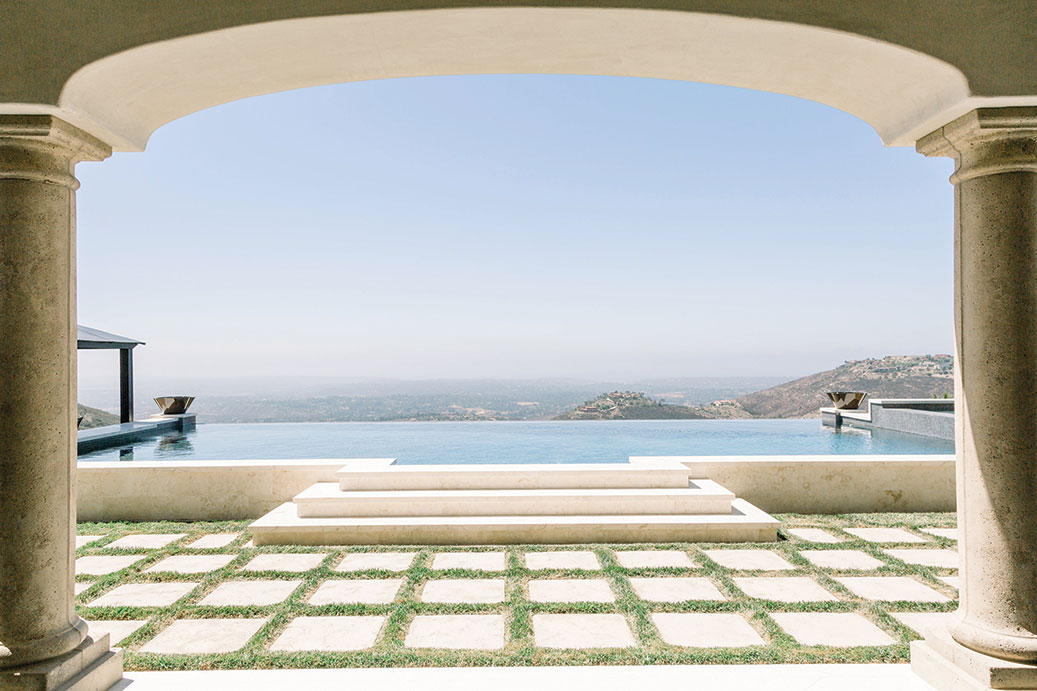 A negative-edge pool aligns perfectly with the front door. “When the lighting is right, the sky, pool and ocean views all appear to be the same color,” Terry says. Photo by Dulcet Creative.

Beloved vacation spots often are the subject of fond recollections amidst the bustle of everyday life, yearning #tbt posts on Instagram and half-baked plans to return as soon as possible. Terry and Tiffany Beck decided to forgo wistful daydreams of Italian getaways and simply create a home instilled with all the amenities, materials and design conventions found in their favorite Italian escapes. 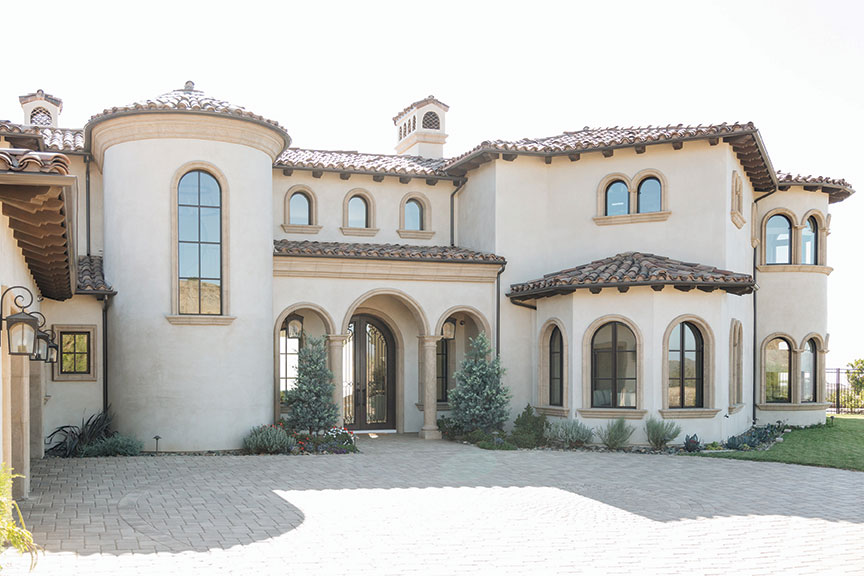 The castle-like exterior of the Beck’s Rancho Santa Fe home is inspired by their many fond memories of Italian escapes. Photo by Dulcet Creative.

It all began in 2011 with the foreclosure of a home in Rancho Santa Fe’s gated Cielo community. Terry, Tiffany and their daughter Kylie, now 14, were happily living in Carlsbad at the time, but decided to check out the property because Terry had great memories of Cielo from his youth. 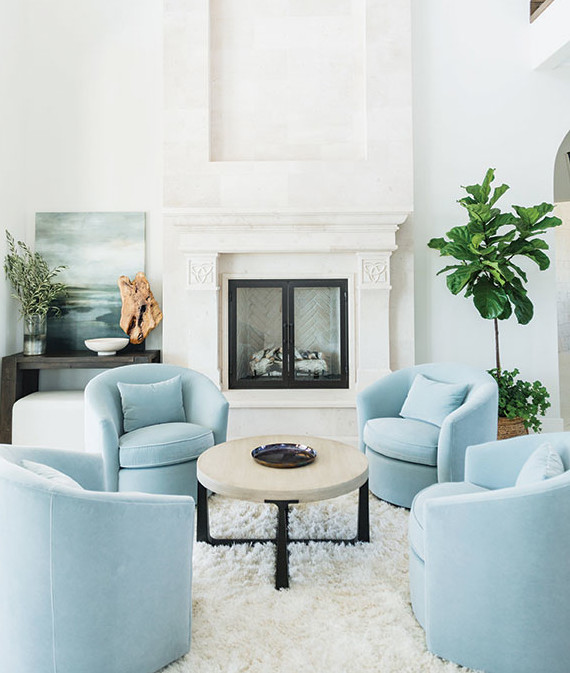 An empty lot with space for dreams

Though the home in foreclosure didn’t work out, the Becks were so enamored with Cielo that they looked at every available property and finally settled on an empty lot that checked all the boxes on their list: panoramic views of both the ocean and mountains, ample space for indoor and outdoor entertaining areas and room for Terry to finally put his passion for vino into practice by starting his own vineyard.

They held off on developing the property until late 2015 when they weren’t as busy expanding their business, TriLink Biotechnologies—which they sold during the home’s construction. Completed last February, the 7,300-square-foot project is now home to the Becks; their cat Parker; and two rescue chihuahuas, Present and Ollie (short for Oligonucleotide, a nucleic acid polymer that TriLink specializes in making). 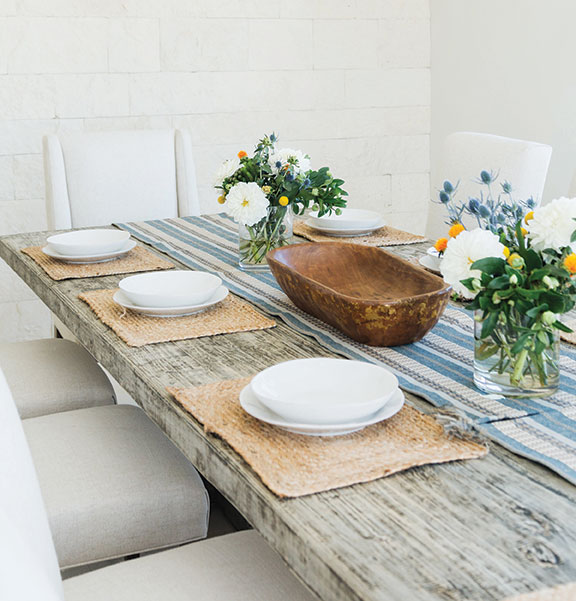 During the beginning stages of the new build, the Becks decided to divide and
conquer.

Terry focused on working with architect Dan Castillero and general contractor Jeff Garner, both of Castillero Design, to make the big decisions about the layout of the home. Tiffany tackled the multitude of smaller decisions surrounding colors, materials, furnishings and finishes, with the aid of interior designer Heather Schmitt, of Heather Schmitt Interior Design, whom she knew from school.

“Heather was a godsend when we were making final decisions about all the little details,” Tiffany says. “I’m always very sure about what I don’t like, but I sometimes have difficulty choosing what I do like enough to go with in the end.”

One thing the couple was certain about: They wanted the home to have a traditional exterior, while the interior embraced a more-modern aesthetic with rustic touches. 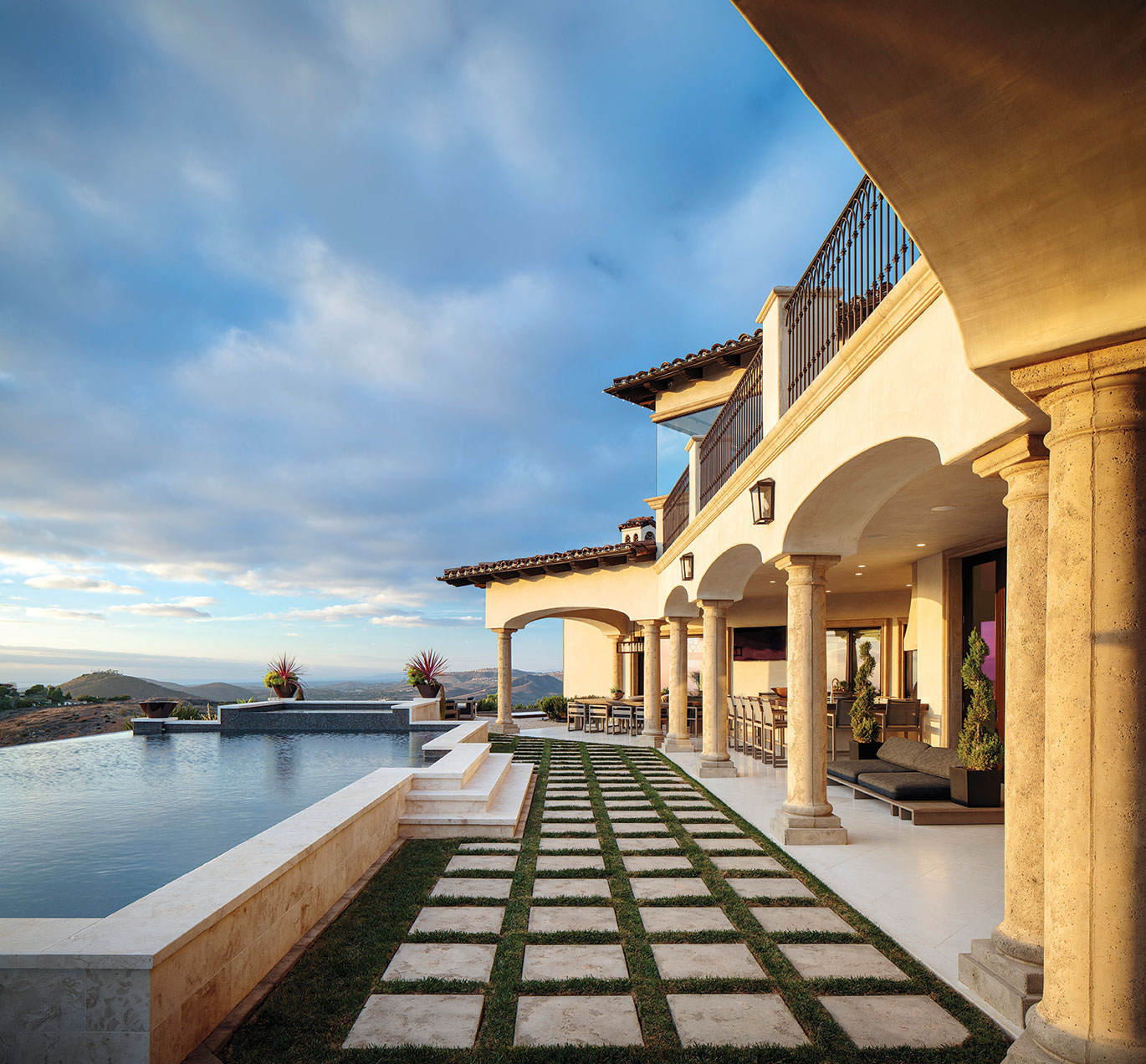 Be one with the gorgeous views

The Becks’ desire to take advantage of the gorgeous surrounding landscapes and sweeping panorama dictated the overall layout and design. The location and number of windows throughout the house was paramount, with Terry weighing in on placement to maximize the views he loves.

Views heavily influenced the color palette as well. “The multiple windows and plentiful natural light exposure decided the colors we chose to work with in selecting finishes,” Heather explains. “With these views, why compete? We went with soft, neutral tones so as not to detract from the surrounding landscape and tried to use natural stone as much as possible to capture the hillside, and rich wood tones to tie in the dark sand and warm brown tones of the hills.”

The conjoined kitchen and living room area perfectly embody these decisions, done in a mixture of soothing cream, gray and brown shades and simple-but-elegant finishes. Heather tackled this area when she first joined the project, dealing with the challenges that arose from Cielo’s strict building regulation that homes leave room for mandatory fire lanes. In order to be within code, certain rooms had to be reduced in size and embrace different angles than originally planned.

Despite these restrictions, the Becks still wanted to accommodate a walk-in pantry (Tiffany likes to store her appliances out of sight), an expansive kitchen island for food preparation, and plenty of seating for frequent guests. Heather employed a trio of light pendants and a herringbone backsplash behind the stove as highlights and to balance the island, which without the fixtures would appear closer to one wall than the other. 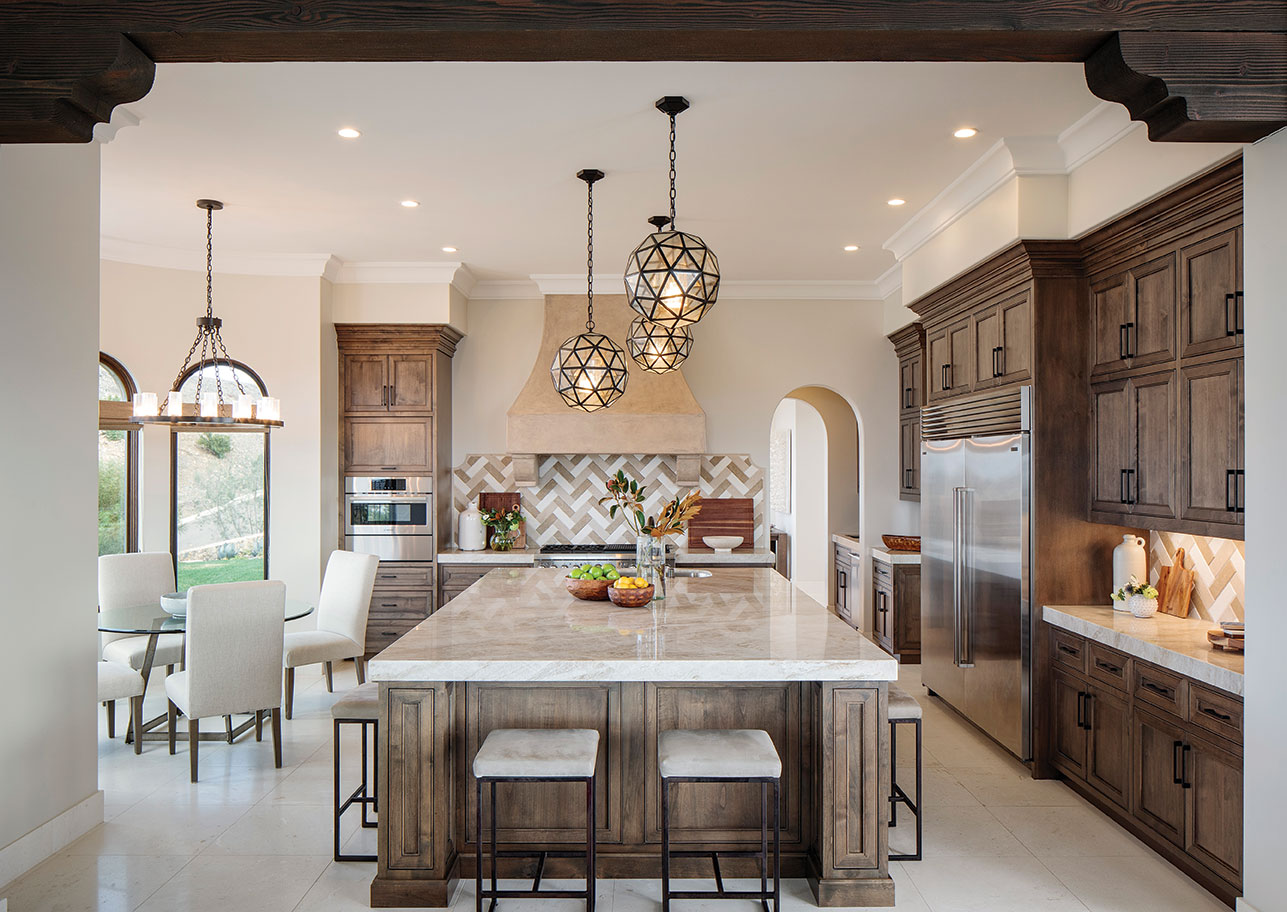 The kitchen island’s top is a custom shade of marble. Photo by Chipper Hatter. 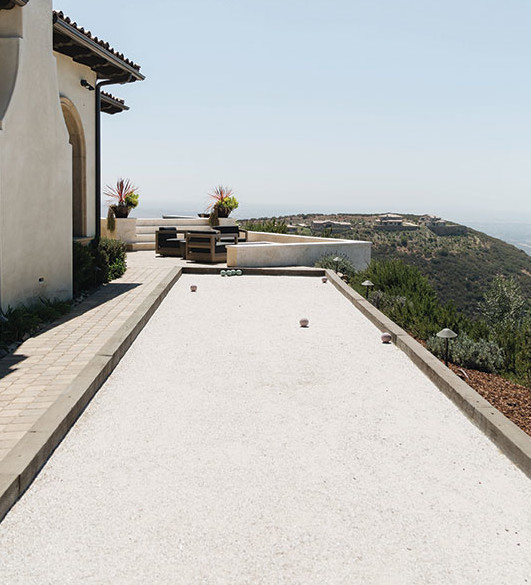 Sliding glass doors open the kitchen to multiple separate-but-interconnected areas perfect for entertaining in a way that allows guests to gather and chat without feeling crowded. Included are an outdoor kitchen and dining area, multiple fireside retreats, a covered poolside bar, and counter seating with a pass-through window for easy access to the game room’s beer tap. These areas are cradled by the home, which curves around them in an arc formation with matching sets of doors to the kitchen and game room on either side. The layout provides fluid indoor-outdoor transitions, easy accessibility to indoor amenities and an intimate feel to the sizeable home.

Many of the couple’s favorite Italian conventions played a large part in creating these spaces, from the indoor-outdoor living concept and traditional columns and landscaping with stone squares amidst grass to the bocce court and negative edge pool that, aligning with their front door, creates a dead-on view from the home’s entryway out over the pool to the skyline. The design mimics one they saw at a villa in Italy. 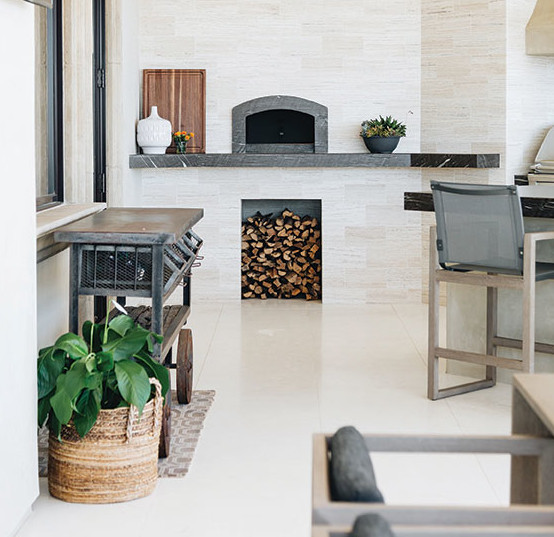 Terry’s favorite Italian feature is the authentic pizza oven that they had shipped over for their outdoor kitchen.

“I make pizzas for my family and our friends out here all the time and it is the most wonderful experience watching the breathtaking sunsets while cooking for everyone.”

Nestled below the main level of the backyard are multiple rock-lined tiers that make up the vineyard, where Terry can be found weeding and tending his vines daily. The hillside was recontoured to create the tiered effect necessary for the growing of his almost 300 vines of Syrah and various table grapes. 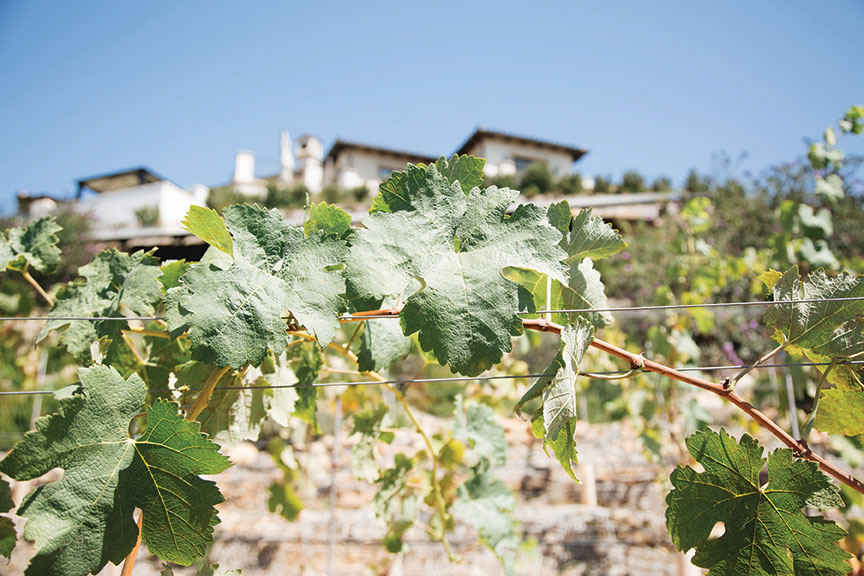 Terry’s vineyard is over 300 vines strong and will soon provide the Becks with Syrah and more. Photo by Dulcet Creative.

On the far side of the yard, Tiffany has avocado and citrus trees growing near a gated patio that houses a special open-air room off the side of the house. Called the “catio,” it is an enclosed playground for their cat, Parker. Heather connected the “catio” to the house via a tunnel that runs under the garage and comes out discretely in Tiffany’s craft room, where plentiful storage and durable quartz counter space accommodate Tiffany and Kylie’s crafting endeavors. 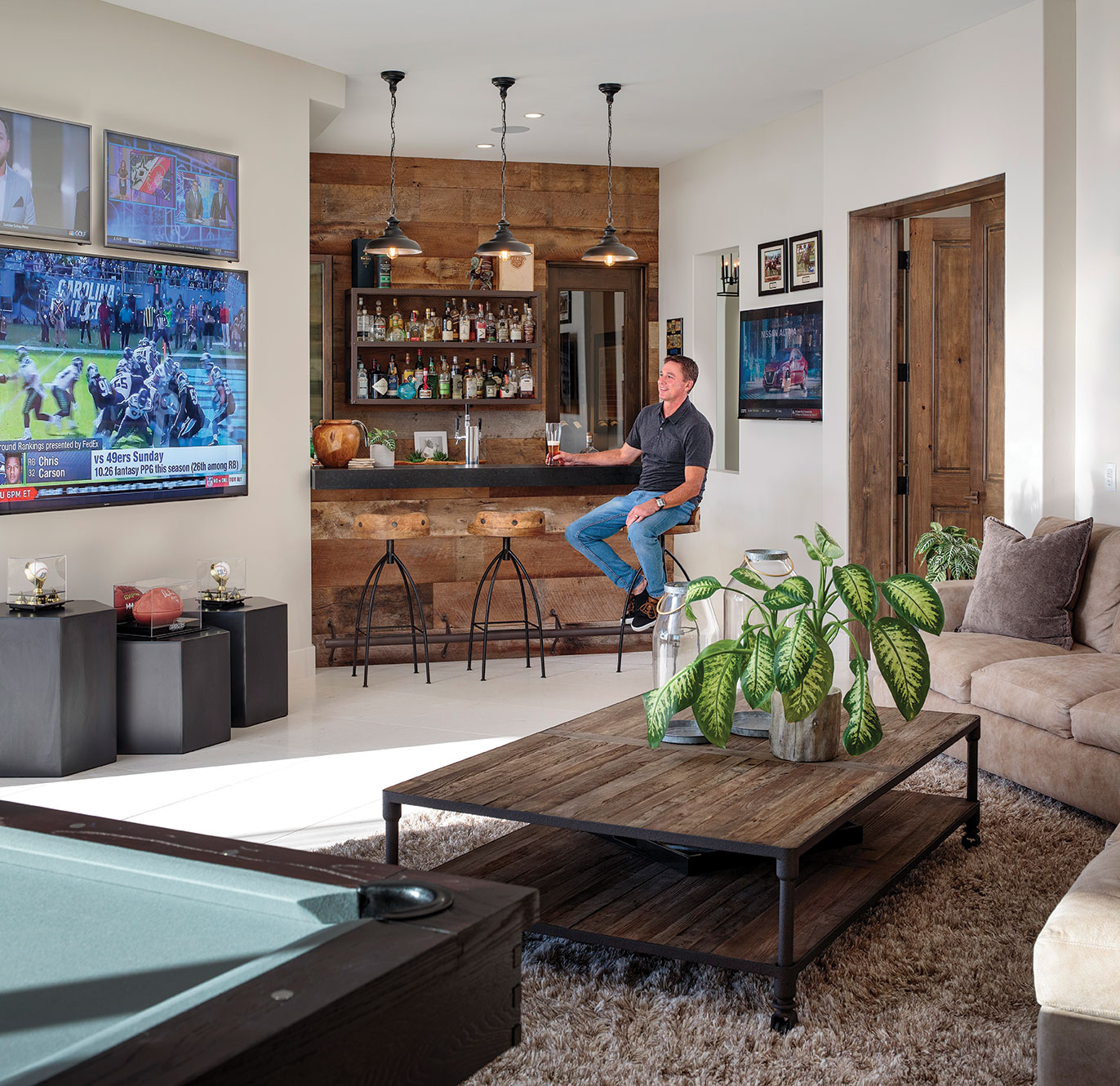 Next door is a movie theater for 12 that Kylie and her friends frequently use. Its popcorn machine and candy dispenser are big hits.

For a sports-centric viewing experience, the game room provides three screens for Terry to take in all of the March Madness action while surrounded by sports memorabilia and a pool table for halftime entertainment. Heather designed the custom angled sofa here with very specific dimensions for optimal views of the TVs and the world outside the sliding glass doors.

“Heather was amazing with creating functional and attractive designs around all of the TVs, crazy AV systems and windows throughout the house,” Tiffany says. 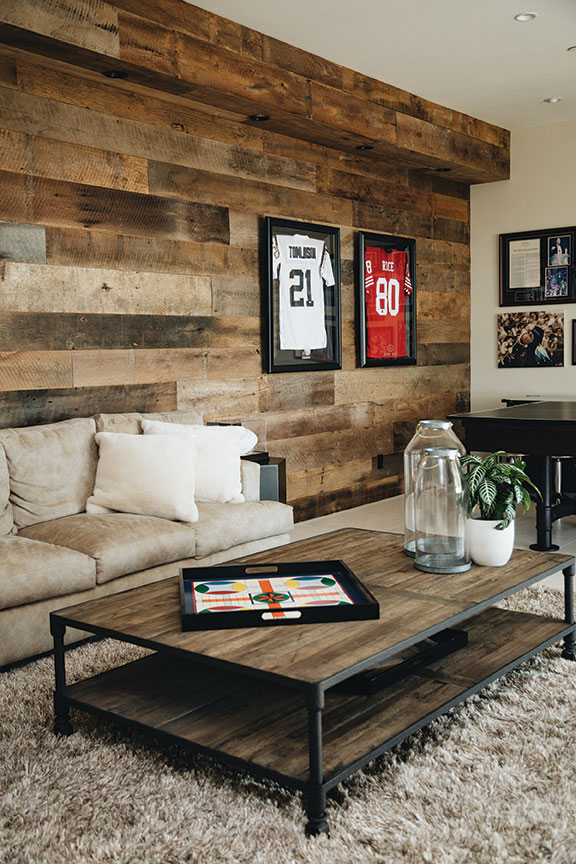 Reclaimed wood from a barn built in the 1800s accents a wall in the game room. Photo by Dulcet Creative.

Reclaimed wood from a barn that was built in the 1800s accents the wall behind the sofa, which is topped by a soffit (Heather and Tiffany’s idea) that helps visually raise the room’s height. The reclaimed wood also adorns the back wall and corner bar’s façade.

The bar’s exterior wall includes an extra-large pass-through accordion window. The plans originally called for a much smaller window, but Terry was inspired by a similar concept that he saw while they were abroad and insisted on the beneficial change.

In the entryway sitting room, a more-than 100-year-old Steinway & Sons piano, which Terry inherited from his father who studied music at UCLA, was equipped with a QRS system so that it can play itself with a command from Terry’s iPhone. Testing out viticulture theories of music’s positive impact on grape growth, Terry has been piping his father’s favorite ragtime tunes down to his grapes. 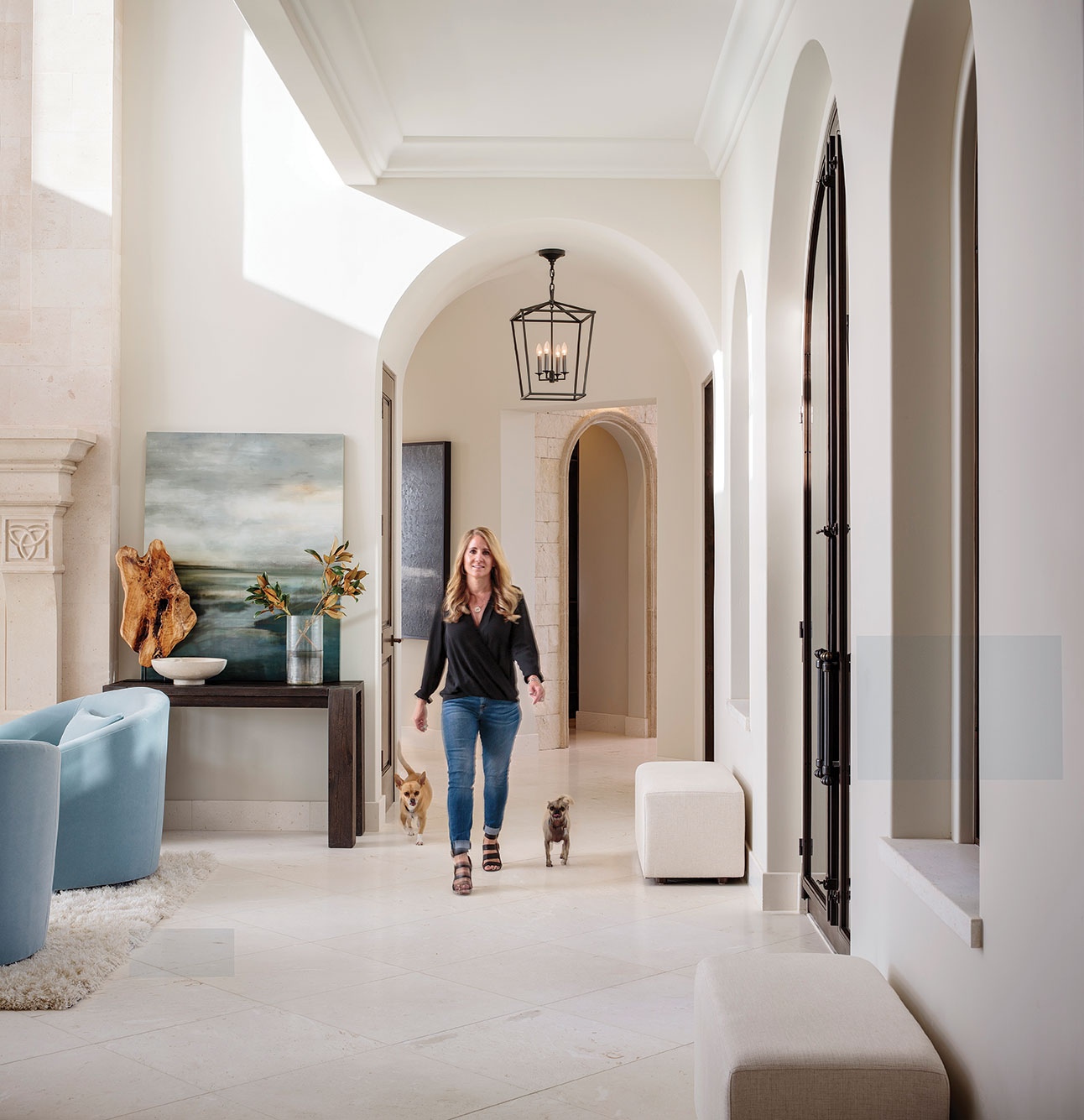 Tiffany and rescue chihuahuas Present and Ollie walk through the entryway. Photo by Chipper Hatter.

A floor-to-ceiling limestone fireplace with unique engravings dominates the wall facing the piano. The matching decorative carvings of a Triquetra Celtic knot (the symbol of their biotech company, TriLink) were a surprise gift for Terry that Tiffany arranged.

The Becks developed a great appreciation for limestone while in Italy. For the ground-level flooring, Heather found a shiny, winter-white limestone flecked with the same champagne shade in the fireplace’s limestone. In the light-filled dining room, a striking rough-cut accent wall also utilizes the material. 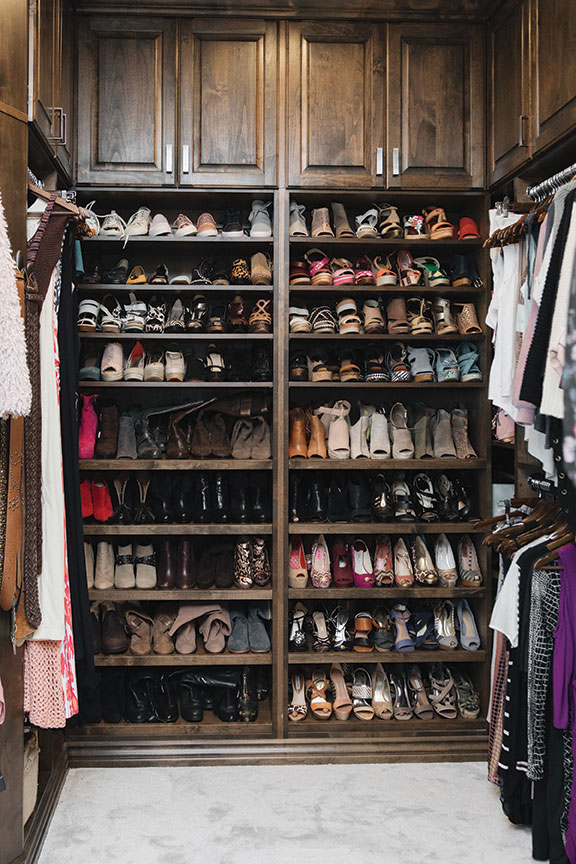 Off the entryway, a winding staircase leads up to the home’s second story, containing the master suite, Kylie’s bedroom and playroom, and multiple guest rooms. Highly durable, dark walnut flooring covers this level.

The master bedroom features a large, curved, corner window with a telescope for star gazing. An arched sofa beneath it offers a cozy spot to curl up on in front of the fireplace. Tiffany likes a little sparkle, and her desire for some shine was fulfilled with gleaming silver wall art, spiky pendant lights and sparkling chandeliers in the master bedroom, bathroom and walk-in closet.

Tiffany knew she wanted a spacious walk-in closet with designated places for clothing and accessories, as well as an island with drawers for extra storage. But the meticulously organized closet’s most impressive feature is also its most subtle because it hides behind a door that looks like coat storage. The door actually leads to the home’s final Italian-inspired feature: an enclosed room with 360-degree-mirror coverage. The space was based on the eight-sided “Mirrors Room” designed by Leonardo Da Vinci, which the Becks saw at the Leonardo Da Vinci Museum when they visited Italy right before construction began.

That was the fateful trip which left Terry and Tiffany overflowing with ideas for turning their future home into what it has become—an oasis that feels more like a permanent vacation resort with all the comforts of home.