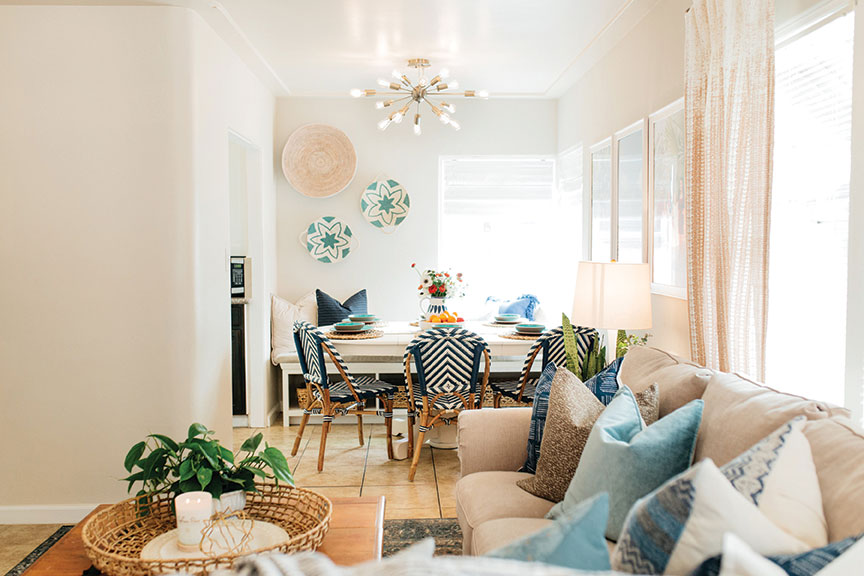 Shocked, ecstatic and overwhelmed, Yesenia and Joe Lopez walked through their two-bedroom home with their daughters Maribel, 14; Alejandra, 11; Rianna, 10; and Yesenia, 8. Was this the same place they had vacated just three days before? That residence housed cheap Craigslist scores, found-on-the-side-of-the-road freebies and a collection of hand-me-down furnishings, like the dining table—with only two chairs—that functioned more like a catchall for things that didn’t fit elsewhere in the home, and the tattered, torn living-room couch that Yesenia and Joe slept on each night, relinquishing the master suite to their three youngest children and reserving the only other bedroom for their eldest daughter. 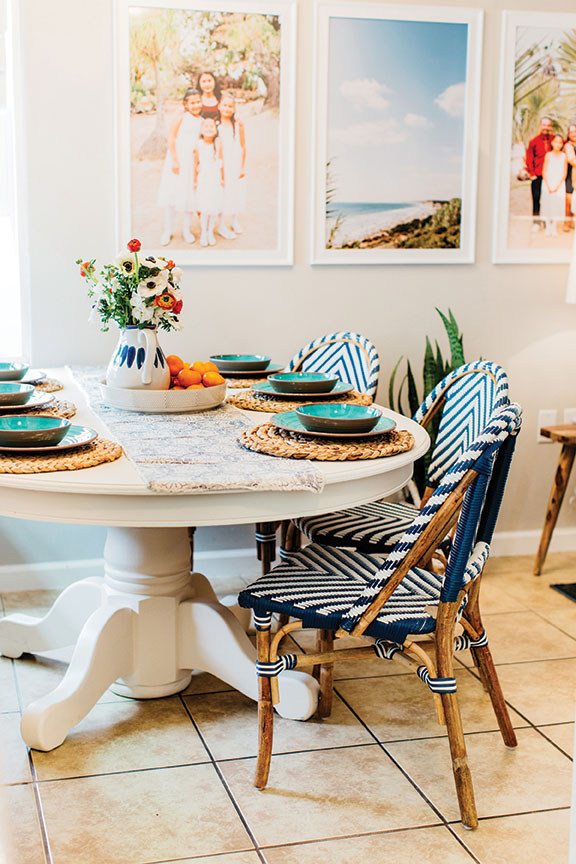 Maegan Swabb of M. Swabb Decor + Style replaced the dining table that had seats for two with a pedestal table, three chairs and a generous banquette. The new arrangement accommodates the entire family.

Now, the residence contained a new sofa, a proper master boudoir, a re-fashioned bedroom for all the girls, and a kitchen table with a banquette and enough seating for the entire family of six.

“It really is more than anything I dreamed of,” Yesenia admits.

Yesenia and her family received this dramatic home transformation thanks to Pen + Napkin, an LA-based nonprofit, and Maegan Swabb of M. Swabb Decor + Style here in San Diego. And though the Lopez family was out of their home for only 72 hours while Maegan, her team and lots of volunteers—many from the Aloha Church—worked their magic, it was the happy ending to a much longer, tug-at-your-heart-strings story.

Last spring, right about the time some of us got our tax refunds, Maegan quietly posted that she was partnering with Pen + Napkin, an organization devoted to helping families transition out of homelessness, to raise money for a deserving family’s home makeover. 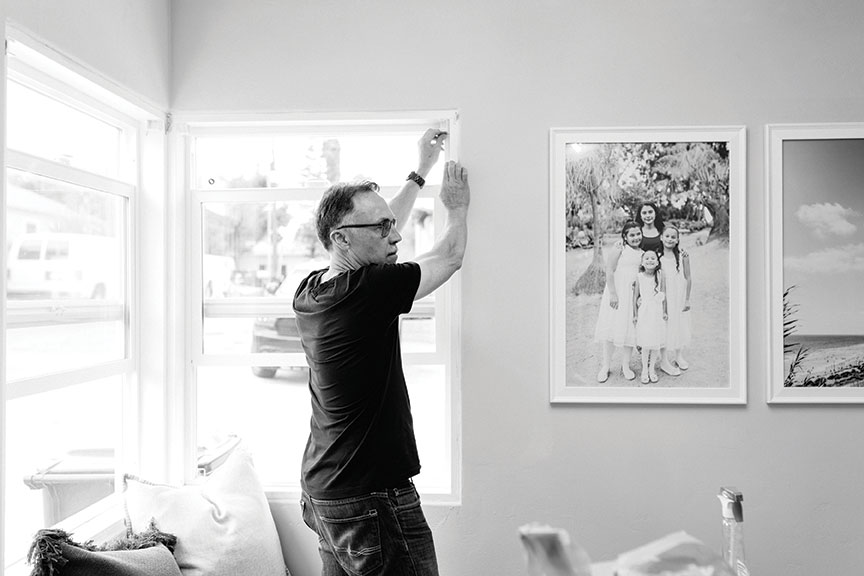 Hank Thomas hangs shades in the Lopez family’s dining area. He’s just one of the many volunteers from Aloha Church, an organization that encourages generosity that impacts San Diego. The Lope family – and designer Maegan Swabb’s project with the nonprofit Pen + Napkin – benefited from the church’s “Random Acts of Aloha.”

Several months earlier, Yesenia had decided to submit her family’s story for a chance at being chosen for the redo. Initially, she wasn’t sure about writing the letter as she felt that her family may not be as needy as others. “We’d already been living in our home for two years,” she says (a success story by some accounts since figures show that nearly 50 percent of families moving out of transitional homeless shelters and into their first home without furniture—such as the Lopez’s—end up back on the street). “We had the basics—beds, a couch, a table. We were living on an extreme budget, but we were doing OK.” 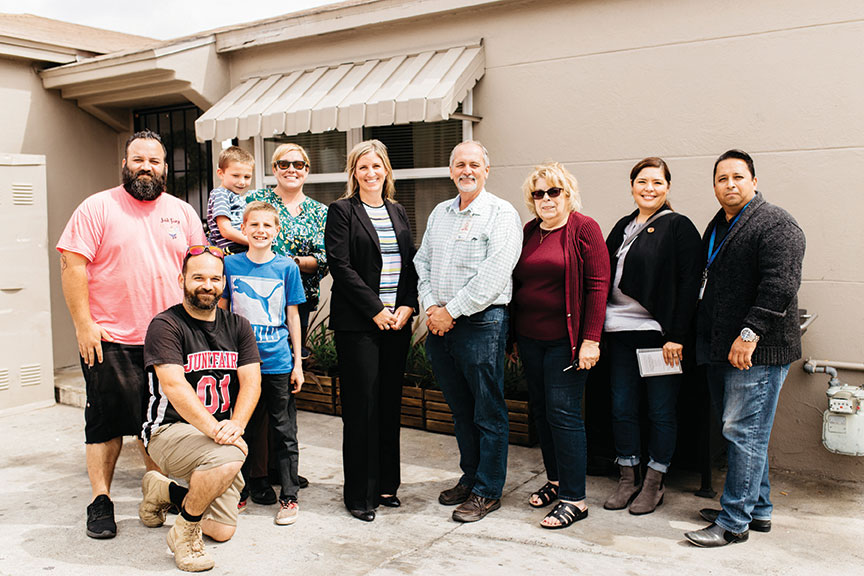 Some of the team, who donated their time and energy include (from left): Junk Fairy representatives; three members from the East Valley Christian Fellowship; Alyssa Turowski, the GM of the Westin San Diego; another representative from East Valley Christian Fellowship and three people from the East County Transitional Living Center.

It was Crystal Scott, then the director of family services at the East County Transitional Living Center (ECTLC) in El Cajon where the Lopez family stayed for some time, who convinced Yesenia to submit her story. So, she put pen to paper and wrote how several years ago, her husband became addicted to painkillers after breaking his arm, how she too succumbed to addiction and drugs, how they lived with their young children in a car for six months, and then in motels they’d rent for the night. Eventually, circumstances led to Child Protective Services (CPS) taking the girls away and placing the two oldest with their father (Maribel and Alejandra are Yesenia’s children from a previous relationship), and the two youngest with Yesenia’s mother. For five years Yesenia and Joe continued to struggle with addiction.

But in October 2015, Yesenia wrote, she was finally sick and tired of being sick and tired, and she admitted herself into an inpatient facility. Joe went to live with his grandparents to also get sober and they ended up at ECTLC together, where the staff helped them rebuild their lives and regain full custody of their four girls.

Halli Aldous, a photographer and interior designer at M. Swabb, took pictures of the Lopez family that Maegan framed and hung throughout the home.

CPS helped the Lopez family with the deposit on their single-family home, which they furnished with the hand-me-downs, thrifted deals and curbside castoffs. “But we were barely keeping our heads above water financially,”  Yesenia says. “We took care of whatever the girls needed, but there wasn’t money for much else.”

While the Lopez family struggled to survive, Maegan was on the hunt for a cause she believed in to which she could devote her time and energy.

She met Catie Bouchard, now president, CEO and founder of Pen + Napkin, several years ago when they both worked out of Moniker Commons, a co-working space in Liberty Station. “Catie had the idea for the nonprofit, and I urged her to just go for it,” Maegan shares. So, last year, when Maegan felt the strong pull to give back and better serve her community, she contacted Catie first, asking if there were any families in San Diego in need of her furnishing and decorating services.

As luck would have it, Catie had just received the Lopez family’s letter, and she assigned them to Maegan.

Like she does with any client, Maegan met with Yesenia for an initial consultation—to assess needs, take measurements and pictures, and get a feel for what the girls liked. 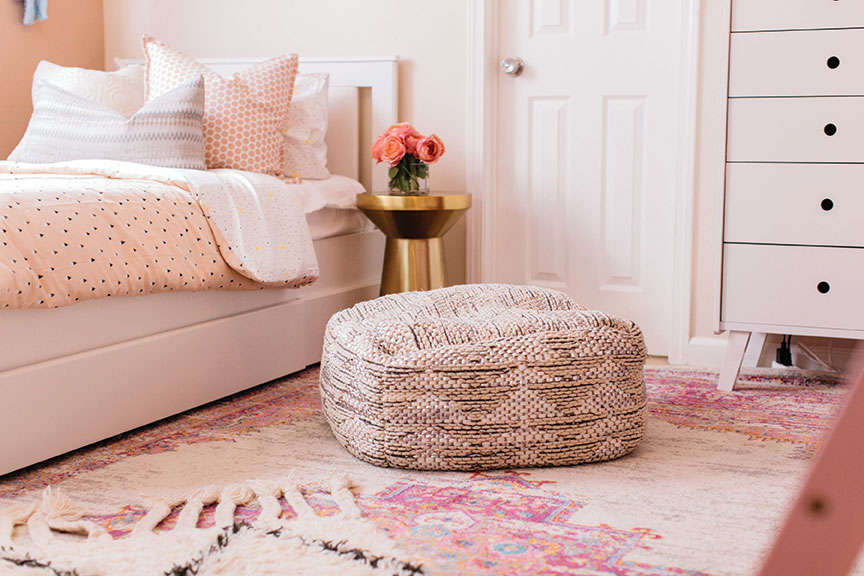 “Because the Lopez family was making whatever furniture they had work, the scale of pieces was wrong, and they lacked sufficient storage,” Maegan recalls. “But I thrive on making smaller areas really functional for clients so I was really excited about the potential I saw for their home.”

Yesenia only asked to keep their coffee table trunk—a favorite find of Joe’s. 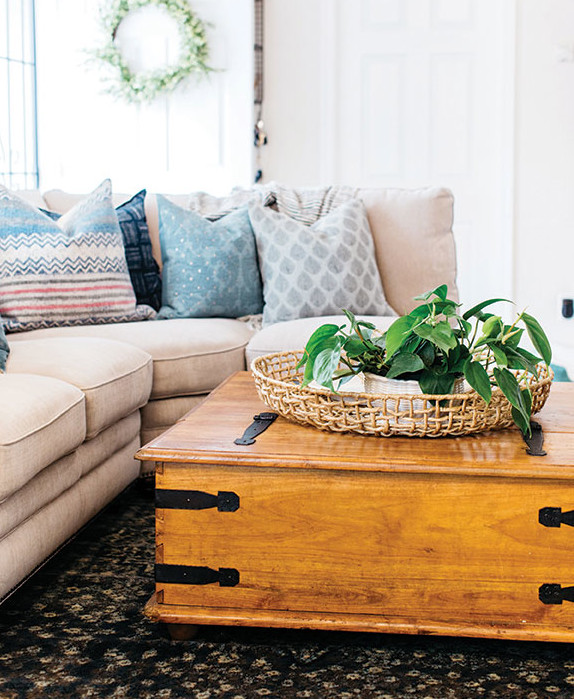 Joe Lopezs favorite trunk is the only furnishing the family kept.

Maegan got to work on the plan, and the fundraising. She set a $5,000 goal and through generous donations from friends, family and clients, Maegan raised $3,115 for furnishings for the Lopez family. Clients in the midst of a whole-home overhaul gave their gently used furniture to the cause. Strangers on Instagram reached out with items they were willing to donate. “We were driving around town picking up great pieces from these thoughtful people,” Maegan says. They also enlisted the help of Junk Fairy, a local business that picked up furnishings and assembled new items for Maegan’s makeover and Bates Building Co., who assisted with the installation.

She reached out to friend (and The Westin San Diego’s general manager) Alyssa Turowski to partner with her and Pen + Napkin to give the Lopez family a weekend away while the team made over the home.

“We aimed to create a memorable ‘wow’ experience for them,” Alyssa explains. Each of the girls received a welcome basket filled with clothing, swim suits, flip flops and more—all donated by hotel staff and others.

The hotel also partnered with SeaWorld, Hornblower Cruises, Dave & Buster’s and other local vendors. “We set up a car service to chauffeur them around and gave them cash to spend,” Alyssa continues. “We held bake sales prior to this to raise the funds.” On site, the family stayed in the presidential suite and enjoyed hotel-catered movie nights and dinners, plus the pool. 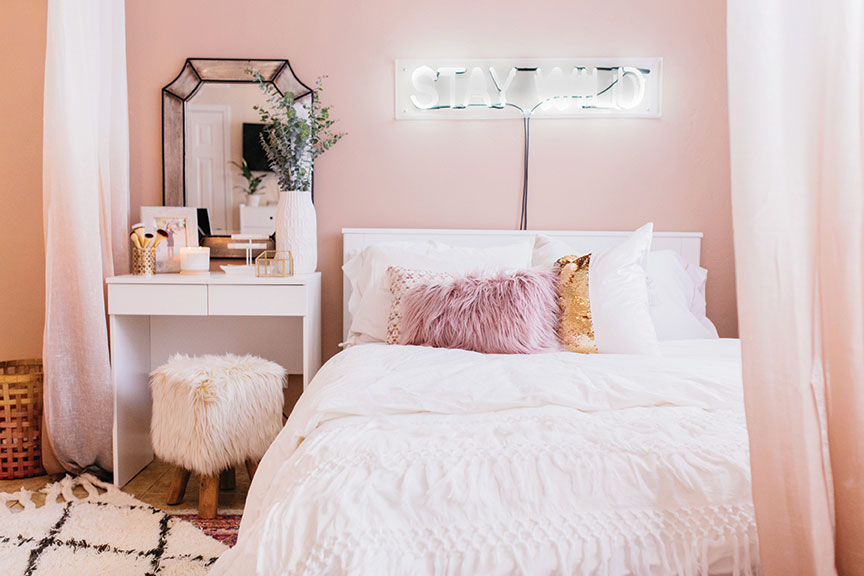 Though the four girls – Maribel, Alejandra, Rianna and Yesenia – all share a room, Maegan carved out a space for each of them and created an area that can be curtained off for Maribel, the oldest. The “Stay Wild” sign above Maribel‘s bed was a donation from one of Maegan‘s clients.

Back at the house, Maegan, her team and all the volunteers worked tirelessly to transform the house. In the second bedroom, which all four sisters now share, Maegan devised a system using curtain wire and shimmery linen drapes to fashion a separate space for Maribel. Decorative pillows, wall hangings, framed pictures, mirrors, greenery, side tables, slim desks, tall dressers, textured poufs and wooly stools, make the room homey but not cluttered. 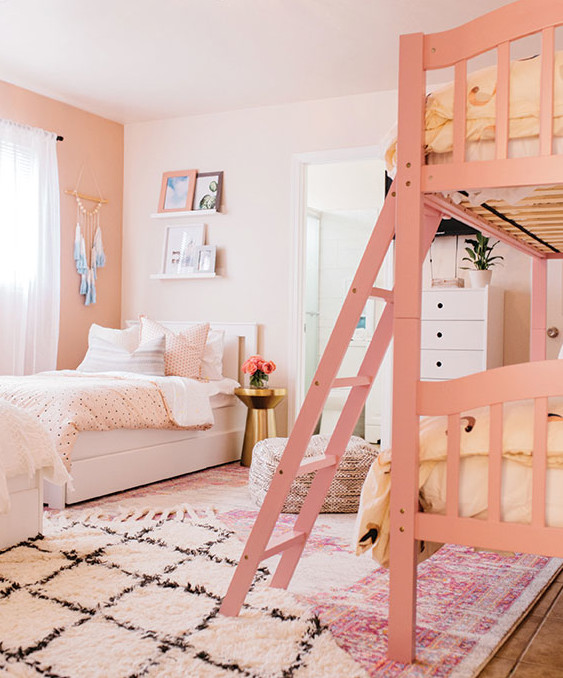 “I’m a ‘more is more’ person,” Maegan admits. “I wanted to give this family more than the basic furnishings. I wanted to add those elements that make a space feel personal and special.”

Besides having photographer Halli Aldous take family photos, which Maegan framed and put throughout the home, she sent her team on multiple runs to get more stuff. “I just kept saying, ‘Get more,’” she says. “I wanted to do for the Lopez family what I do for every client, which includes styling all the rooms, tabletops and shelves.”

A new sectional around the old coffee table helps give the main room style and a round table with cafe chairs on one side and a long, custom-built bench (with much-needed storage underneath) does the same for the dining room.

And Yesenia and Joe finally have a proper master bedroom, a retreat for two, which has fast become Yesenia’s favorite room in the house. “I cried when I saw it,” Yesenia admits. “And I fall in love with it all over again every day.” It’s her sanctuary from the hectic world and chaos of living with four teen and preteen girls.

For Maegan, just seeing the Lopez family’s reaction when they walked through the door made her want to find another family to help. “Initially, I thought I wanted to do four of these sorts of makeovers a year,” she says. “But I don’t think I can commit to that. They take a lot of work and people. I am so proud of my team and how involved they got; they all donated their time. So for now, we’ll focus on one project of this scope a year.” 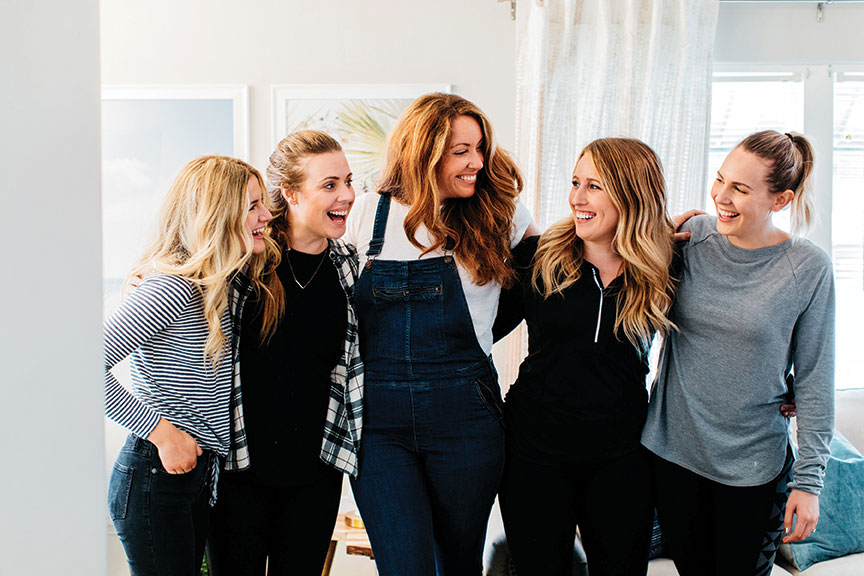 “I am so proud of my team,” Maegan says. From left: Halli, Corrie, Maegan, Caitlin Wright and Hannah Rodriguez.

More from this amazing transformation: 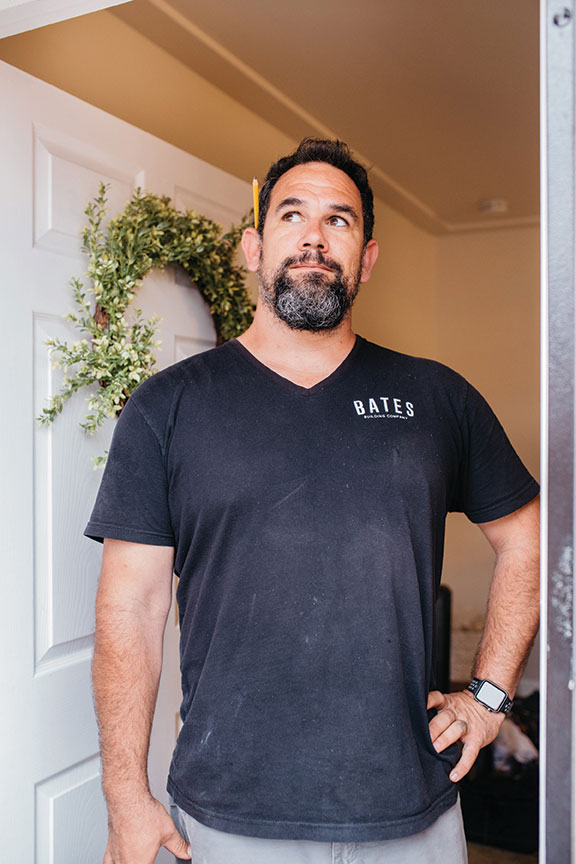 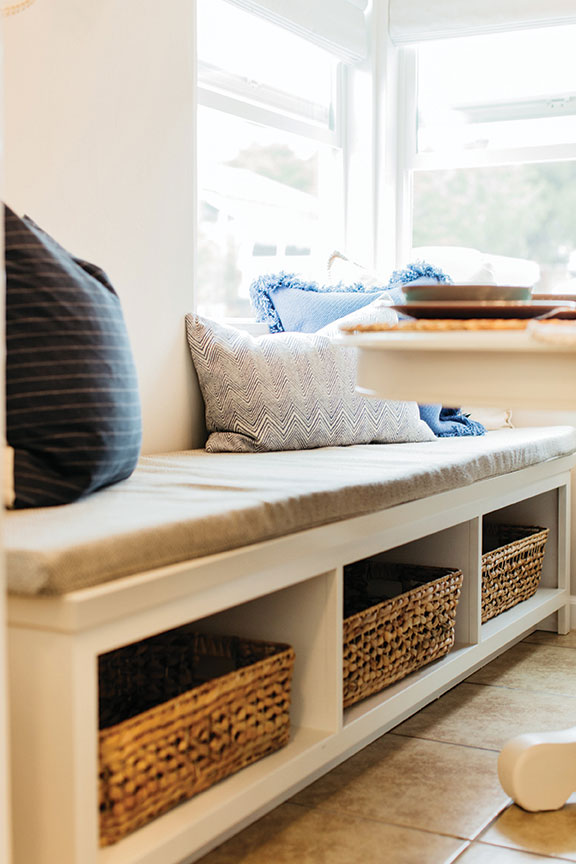 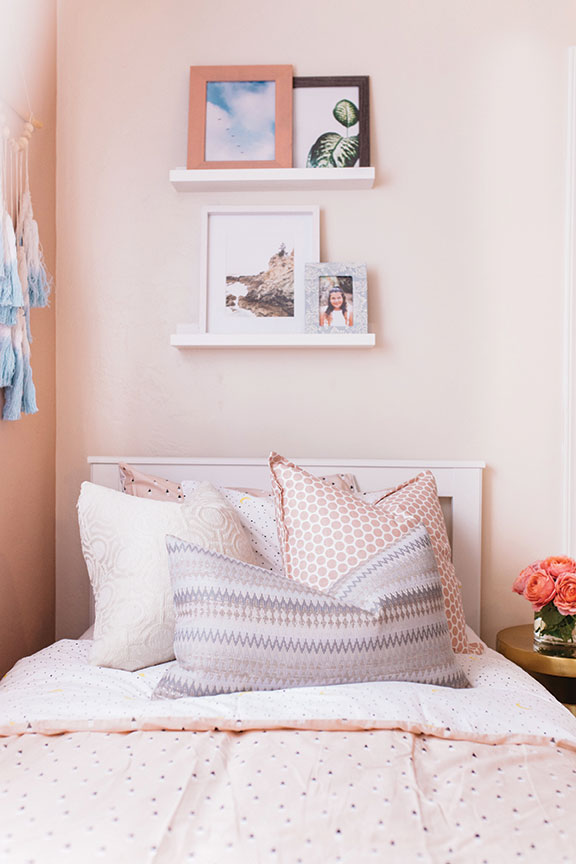 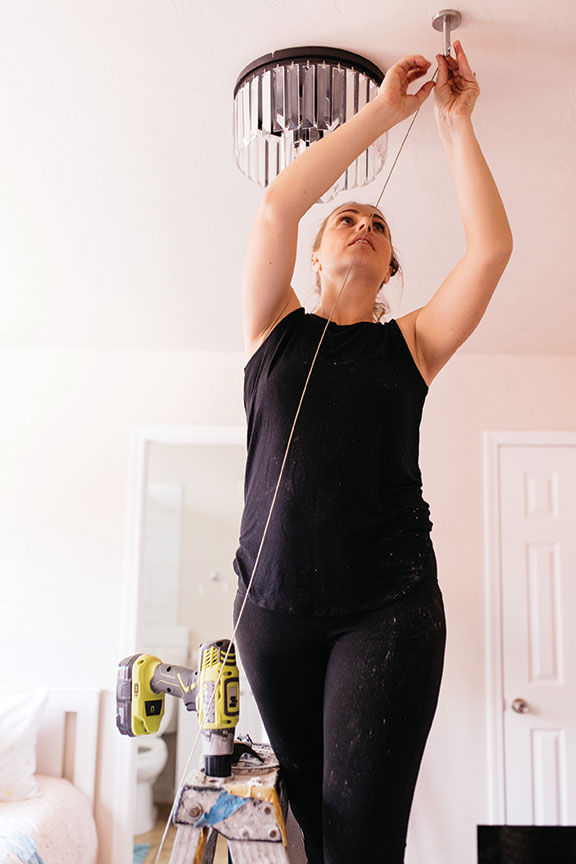 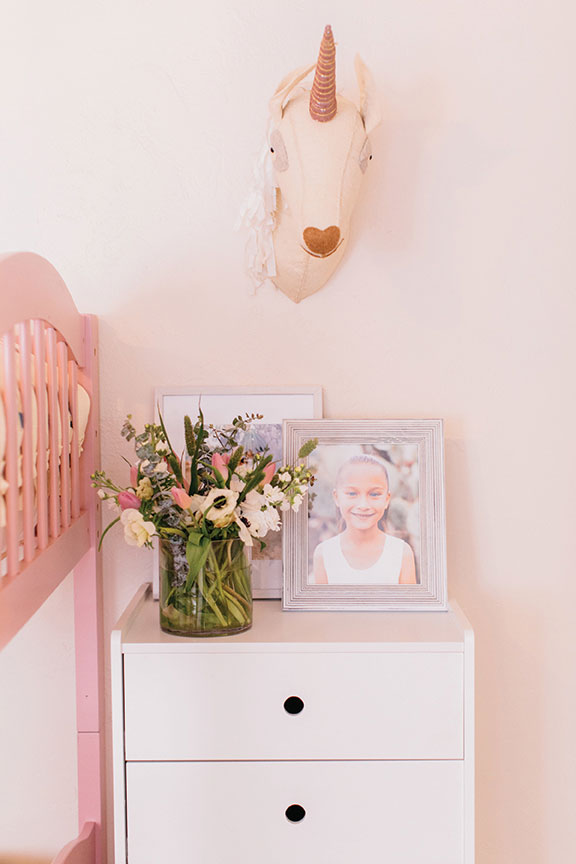 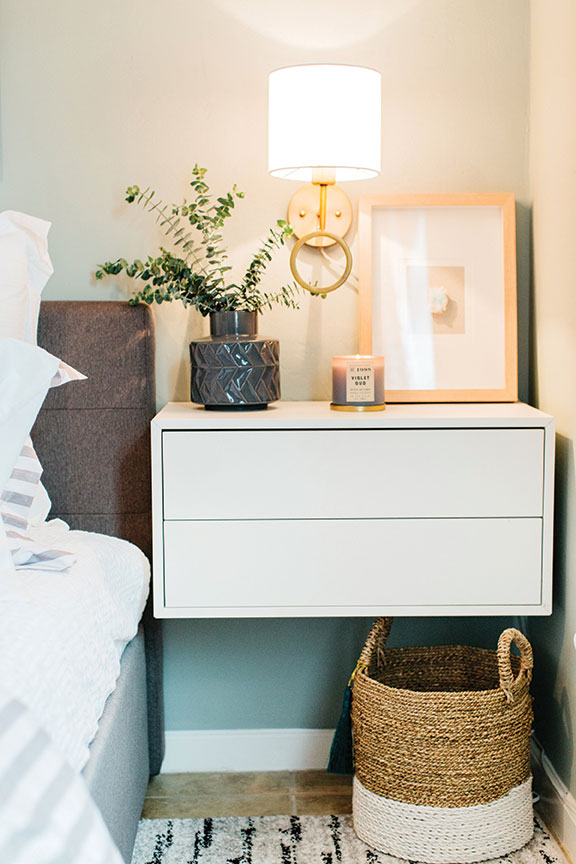 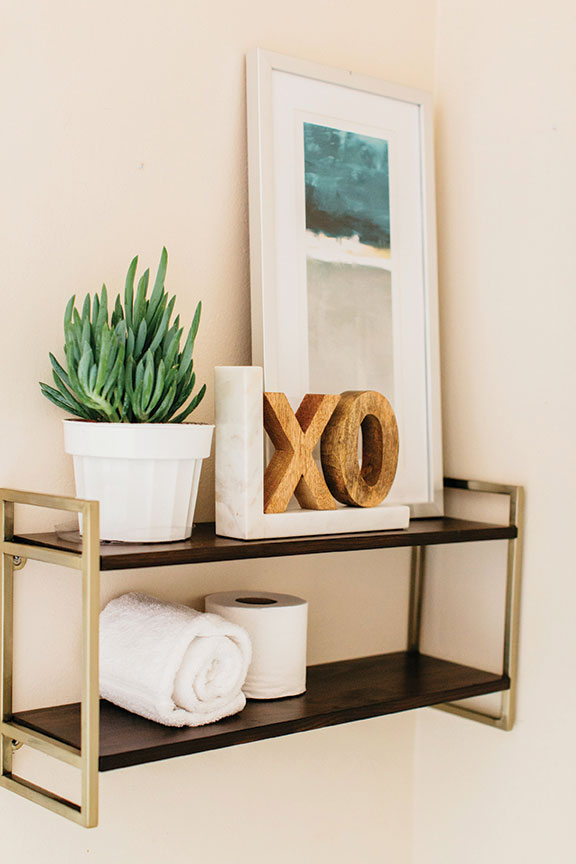 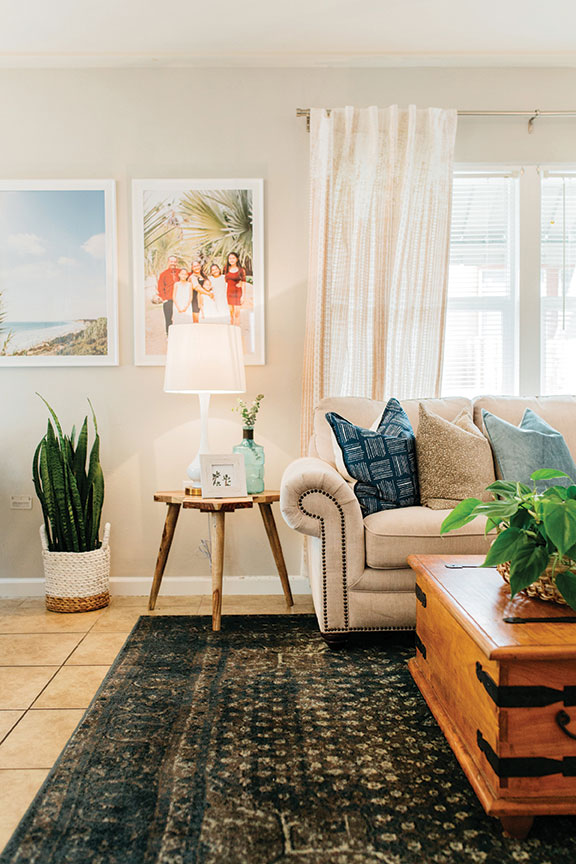 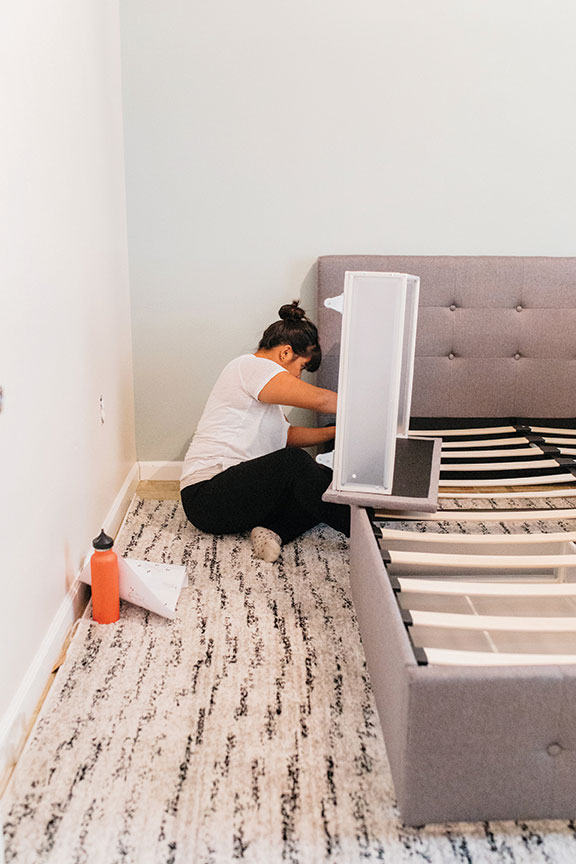 Want to get involved with Pen + Napkin?

Earlier this year, designer Emily Henderson hosted a rummage sale to benefit Pen + Napkin, and it was a HUGE success, raising over $15,000 for the nonprofit. But there are ways you can help on the micro-level so Pen + Napkin can add to the number of homes they furnish (it was 65 at last count) and families they help.

Give money. Obviously a no brainer, but your funds aid the organization’s mission to help not just families, but veterans and foster youth transition into fully furnished, decorated homes as well.

Give your time. Have a talent for decorating, building or putting together assembly-required furnishings? Visit penandnapkin.org, fill out the volunteer profile, describing your specific skillset, and Pen + Napkin will contact you.