This chocolate croissant bread pudding, inspired by the greats at San Diego’s St. Germaine’s Bistro & Cafe takes the decadence and nostalgia of bread pudding up a few notches. Start with plain croissants and pair with cinnamon-rich Mexican chocolate. Is there anything more romantic than a Parisian cafe and the wafting scents of fresh-baked flaky croissants? Maybe not, but turning those croissants into this delicious and simple dessert is a worthy and unique alternative. 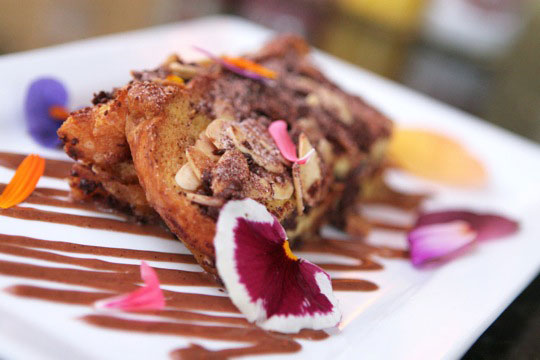 Preheat the oven to 350 degrees F.  Butter a 9-inch pie plate and set aside.

Combine the eggs, half-and-half, and brown sugar in a large bowl. Whisk and combine.

Press the sliced croissants into the egg mixture and soak for three minutes, turning once or twice.  They should absorb the egg mixture but not to the point of falling apart.

Fit the bottom half of each croissant into the buttered pie plate, sliced side down.

Sprinkle 1 cup of the Mexican chocolate over the croissants and then 1/2 cup of the almonds.

Bake the bread pudding approximately 45 to 60 minutes until it is puffy and dry on top but still moist inside.

Remove from the oven and let cool slightly before cutting and serving.

Serve warm, at room temperature, or chilled.  The bread pudding can be stored, covered, in the refrigerator for up to four days.

Combine the chocolate chips, sugar, and cinnamon in a food processor and pulse until finely ground. Store in a cool, dry place in an airtight container.