The Secret Life of Bread 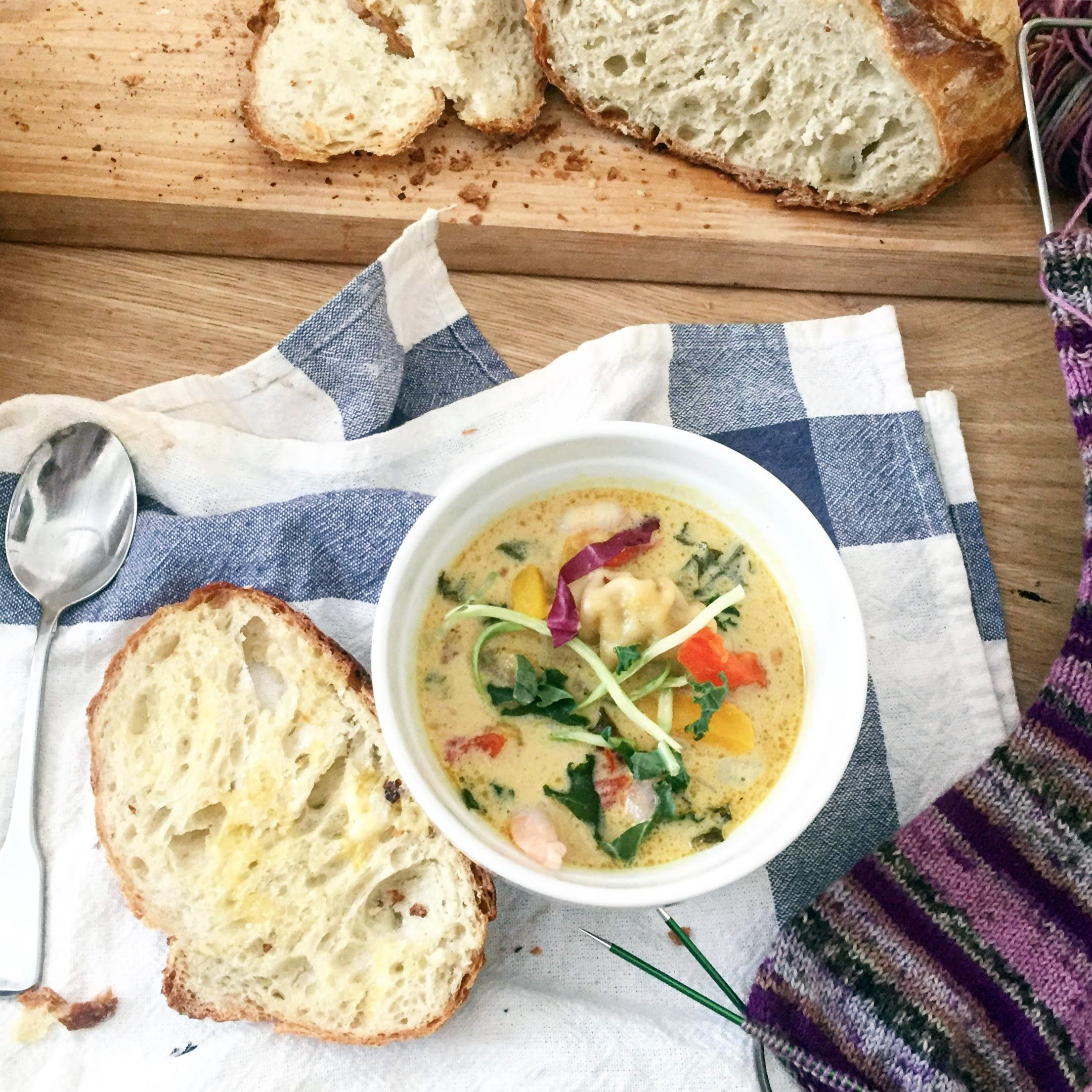 I’m on my way to art director Emily Jones’ little cottage across from Balboa Park. Traffic is a tad snarled and as I round the corner to park, my cell buzzes. I turn off the car, look at my phone and see a text from Emily that says, “Hurry up. She’s bubbling.” 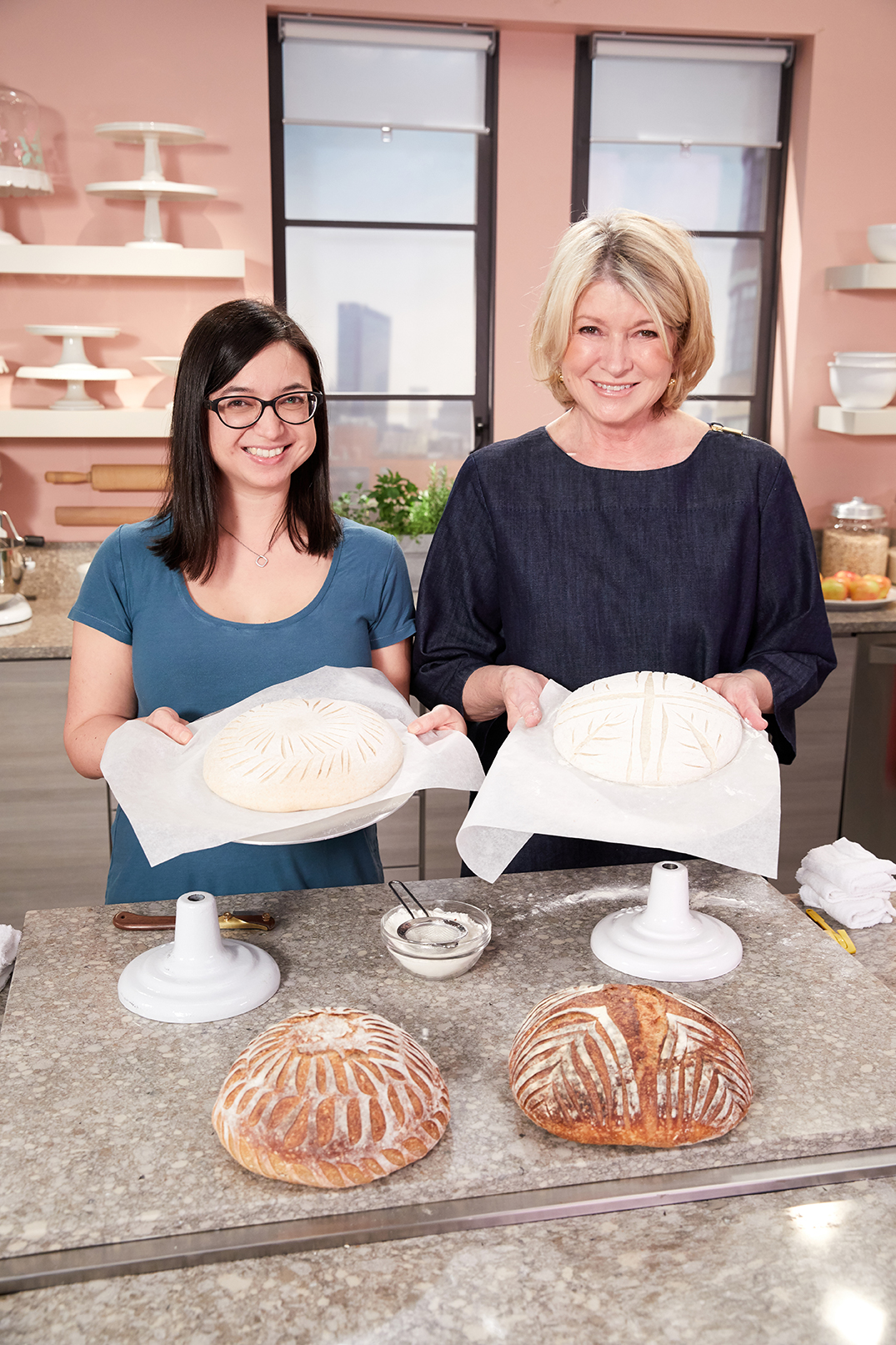 Emily is not talking about a volcano that’s about to erupt. She’s talking about the high-spirited goo inside a bowl on her counter that she made using “Perpetua”—the sourdough starter she raised from a dehydrated 14-gram sample of her friend Erin Slonaker’s starter. Erin’s starter, named Constance, has been on Martha Stewart’s PBS show, Martha Bakes, so essentially, as Emily likes to point out, Perpetua has a famous mother.

Starter is made from equal parts flour and water and when you have to bring it back to life, as Emily did, you add more water and flour. Well, that’s the basics. The process is a bit more complicated than that. And although Emily has told me about Perpetua—like about a bazillion times—including letting me in on the reason for her name (because she’ll live forever as long as Emily tends her, feeding her regularly with flour and water), I don’t really know any of her intimate details, so I’m headed over to Emily’s house to learn as much as I can in a few scant hours about the art (or is it science?) of baking bread. 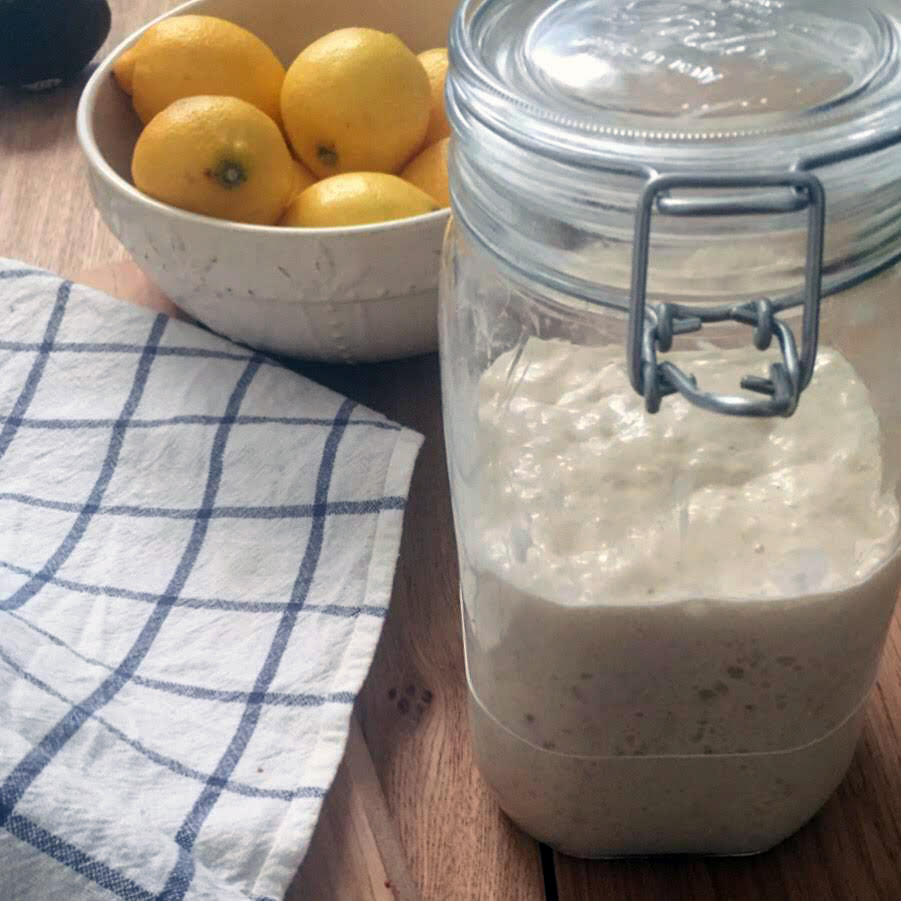 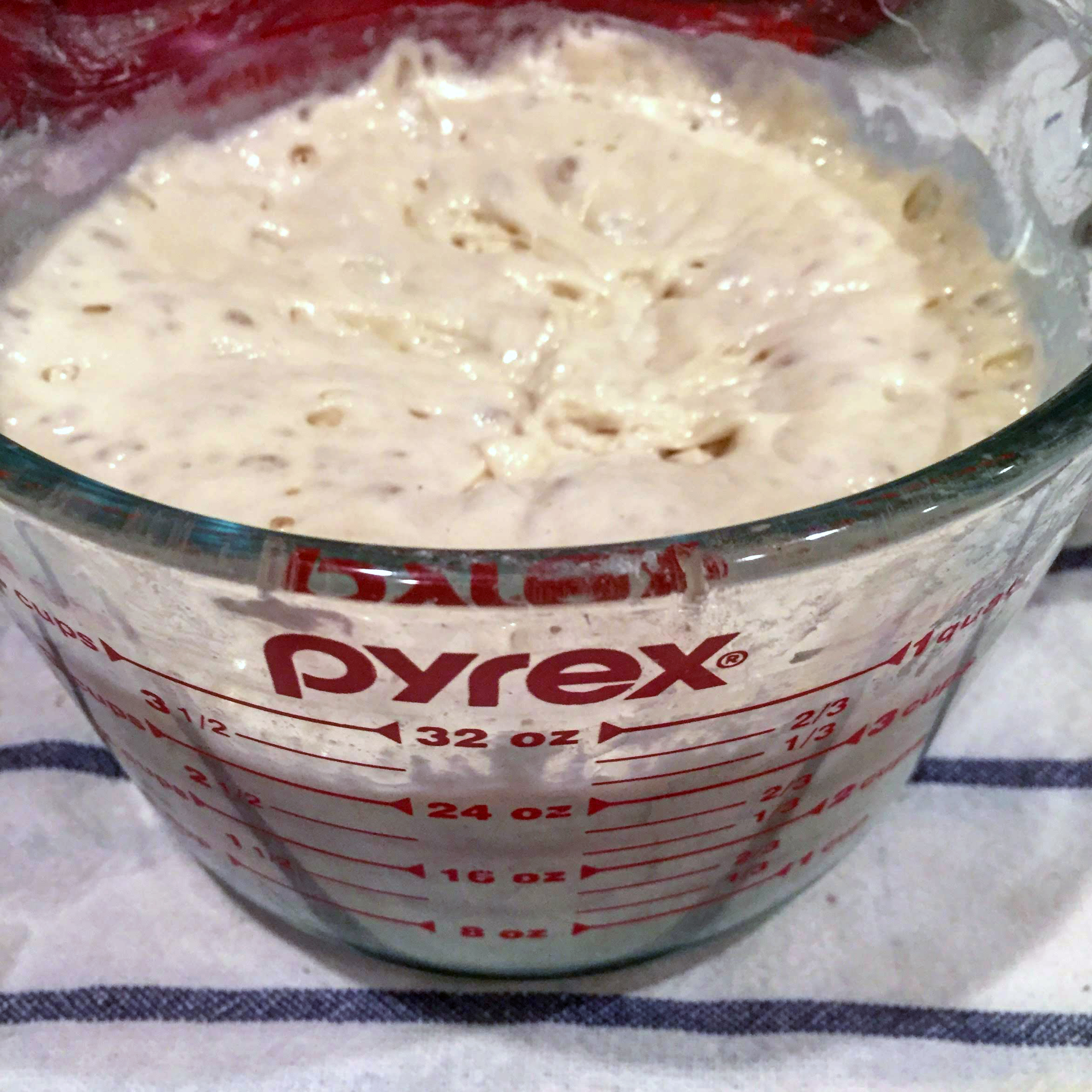 Active, fed starter ready for use in baking (photo by Emily Jones)

I get out of the car and hurriedly open Emily’s gate, walk over the wee bridge and see that she’s left her door ajar. I head toward the kitchen, where Emily is looking at the wet, sticky bubbling dough. It’s been sitting on the counter in a bowl covered by a damp towel for, oh, about 14 hours, for proper fermentation. “Sourdough can be tangy,” Emily explains. “The longer the fermentation, the more sour it can get. And the longer you let the natural enzymes react with the flour, the more robust the flavor and texture of your bread. I’ve let it ferment out for as much as 20 hours before.” She slides the bowl over my way. “See how bubbly she is?”

I look down at the activity brewing in the bowl. My sniffer detects a bit of fruitiness and maybe a tad of vinegar. Emily tells me that’s actually from bacteria—good bacteria, of course.

“I don’t know,” Emily says, sounding worried. “It’s been very humid. Temperature and time are the biggest factors of the rise. It can be either under- or over-proofed. If it’s over-proofed it will have exhausted itself and it won’t have enough energy for a final rise.” 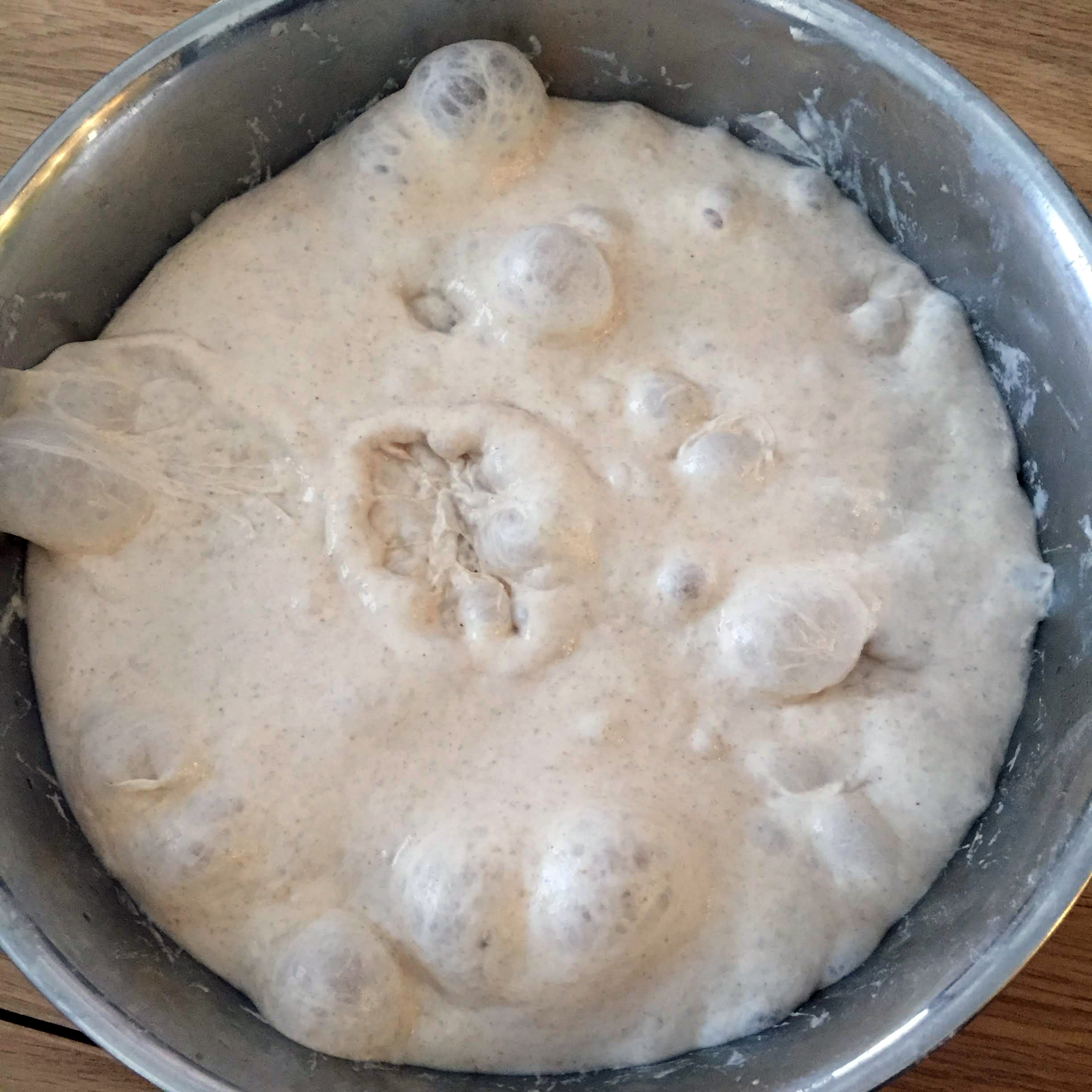 This dough was resting for 14 hours, the “bulk fermentation” period (photo by Emily Jones).

Emily does a little test, pushing down on the dough. It springs back quickly. “Oh, she’ll be fine. She’s very resilient … although she is kind of a bitch.”

I can’t tell if Emily is talking to me, the dough or herself. Regardless, it’s time to tip the bowl over and set the dough down on a cutting board that Emily has lightly floured. “I’m going to try not to deflate her on the way out,” Emily says. Apparently, among other things, that could interfere with the gluten production—gluten gives the bread its structure and it’s the stringy stuff I can see as the dough makes its way out onto the cutting board. 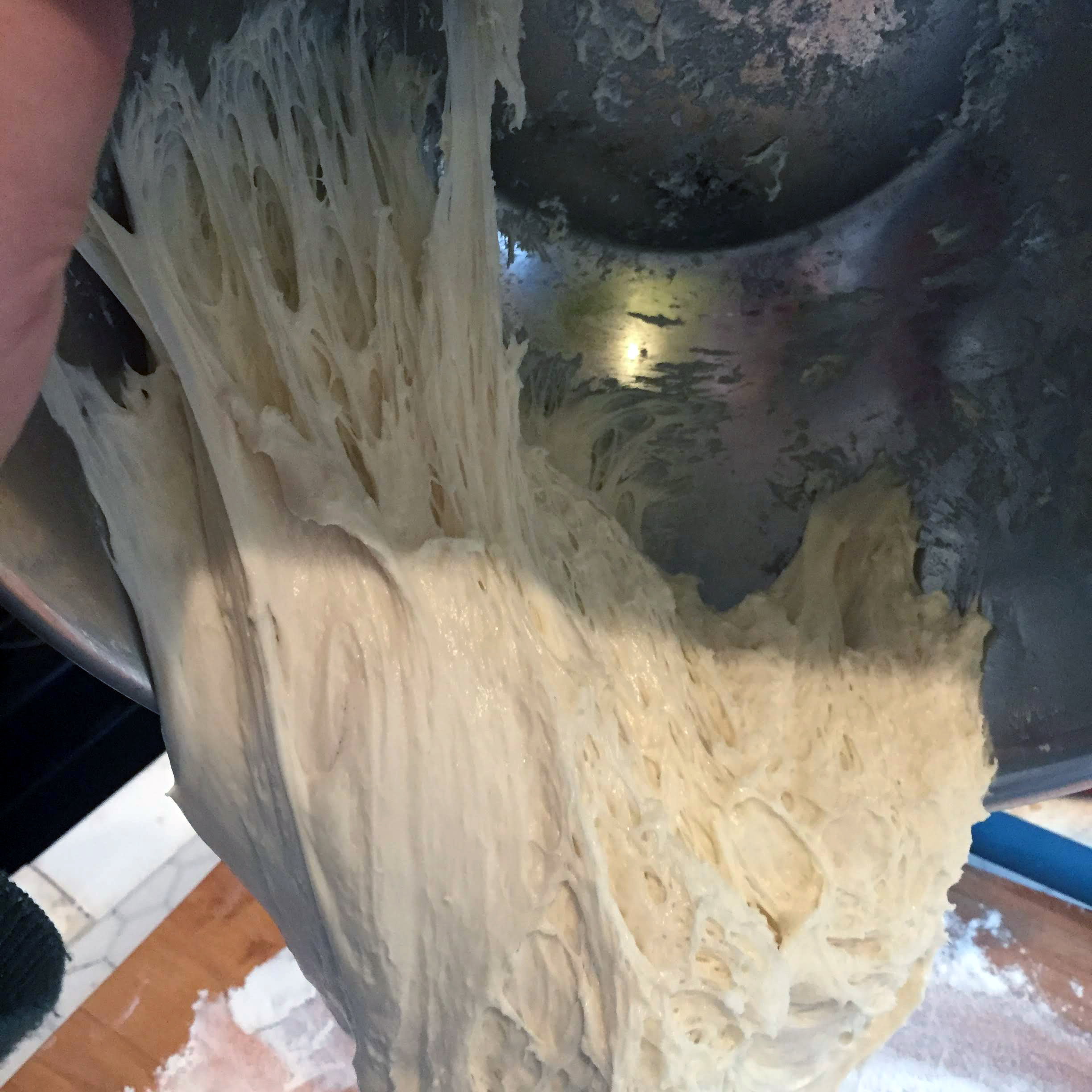 Once she’s out of the bowl, she’s ready to be stretched and folded—not kneaded—to tighten her up. In no time, she’s gone from a sticky goop to a well-rounded, smooth mass. I pat her little bum but Emily says not to pat her too much or she’ll get depressed—which isn’t quite how Emily worded it, but it’s that keeping the air in thing again. She needs to be able to rise to the occasion, I guess. 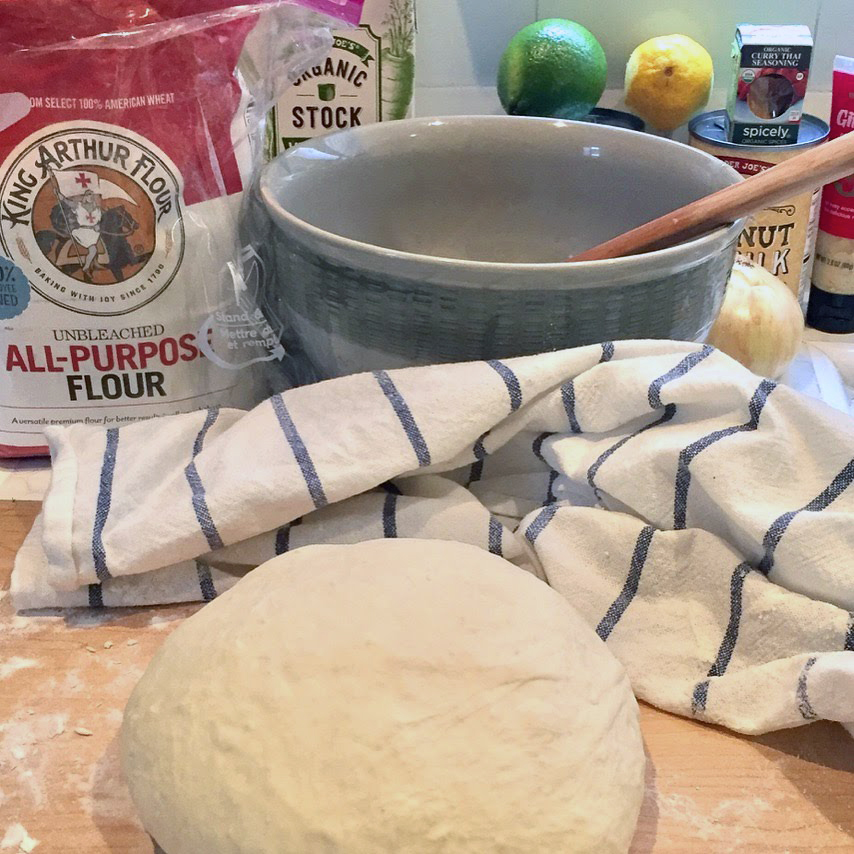 A Second Rise in a Proofing Basket

Emily says that after the stretching and folding, she (the dough, not Emily) needs to rest for five or 10 minutes. We let her relax and rise up again (because the gasses are still active) in the final proofing basket (termed a banneton) that’s round, made of wood, and has little decorative lines to give her a nice shape and crust. Her smooth butt, which has been sprinkled with flour and cornmeal (as has the bowl), faces down; the seam side faces up. “Cornmeal is coarser than flour and adds crust to the top of the bread—sort of like a little ledge for it to stand on,” Emily explains. A damp towel gets placed on the bowl’s top to keep the dough from drying out. 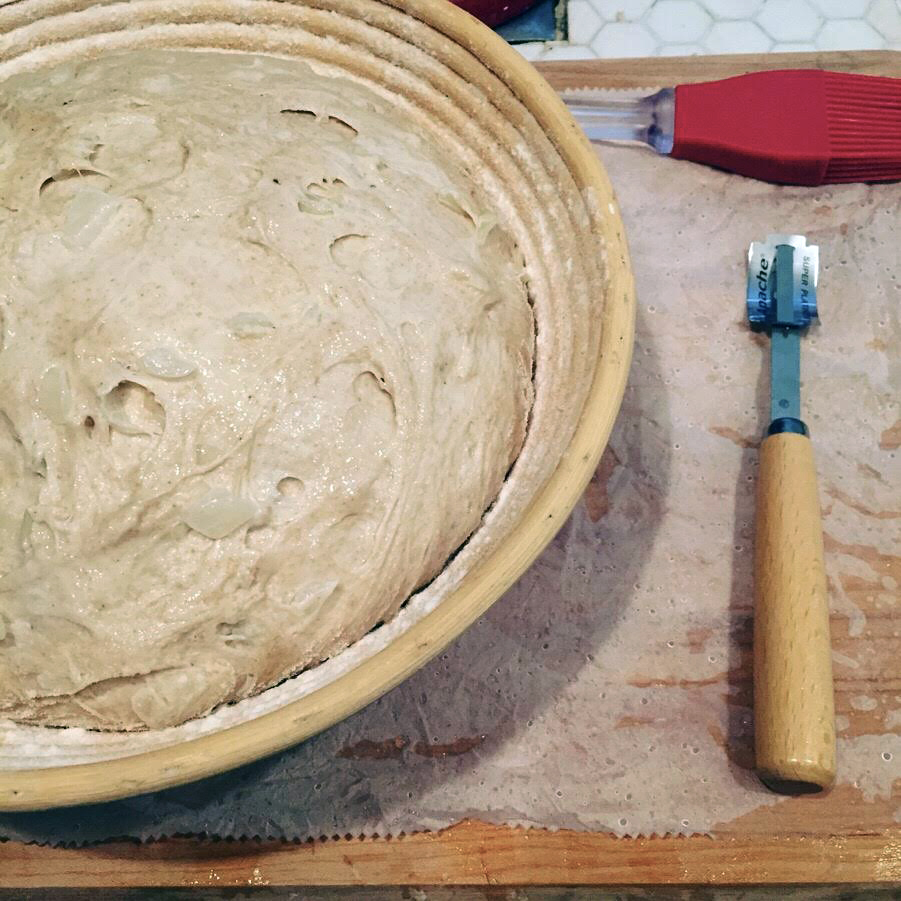 After about an hour, it’s time to put her in the oven. Emily takes the damp towel off and says, “Hey, girl, how are you doing?” She gently pokes the dough to test it, sees that it’s still bouncing back up and jiggly—which is good—and turns it out onto parchment paper so the smooth side is now facing up. Emily uses brown parchment paper—not white because she wants rustic, not elegant—that she crinkles up and dampens. “What makes the crust crispy is steam,” Emily points out. “This kind of does that by capturing moisture in the dough.”

Emily brushes off the excess cornmeal and sprinkles the smooth side of the dough with a bit of flour, gently rubbing it over the top like she’s patting talc on a baby’s butt. The dough stays nestled in the rumpled parchment paper and they both get placed inside a lidded Dutch oven that has been warming in the appliance as it was preheating to 450 degrees F. Emily cuts off the excess parchment paper with scissors, and then quickly scores the dough using a razor-like tool called a lame. “Scoring allows the bread to rise more evenly,” she says. Emily gives the dough another teeny tuck like she’s getting the thing ready for bed, and then down comes the pot lid and the oven door closes. “Now, say a little prayer, wish her a good voyage and we’ll see her in a bit—30 minutes with the lid on; 30 minutes with the lid off. The squares of the cuts should rise up and look almost burnt. You want a dark bake.” 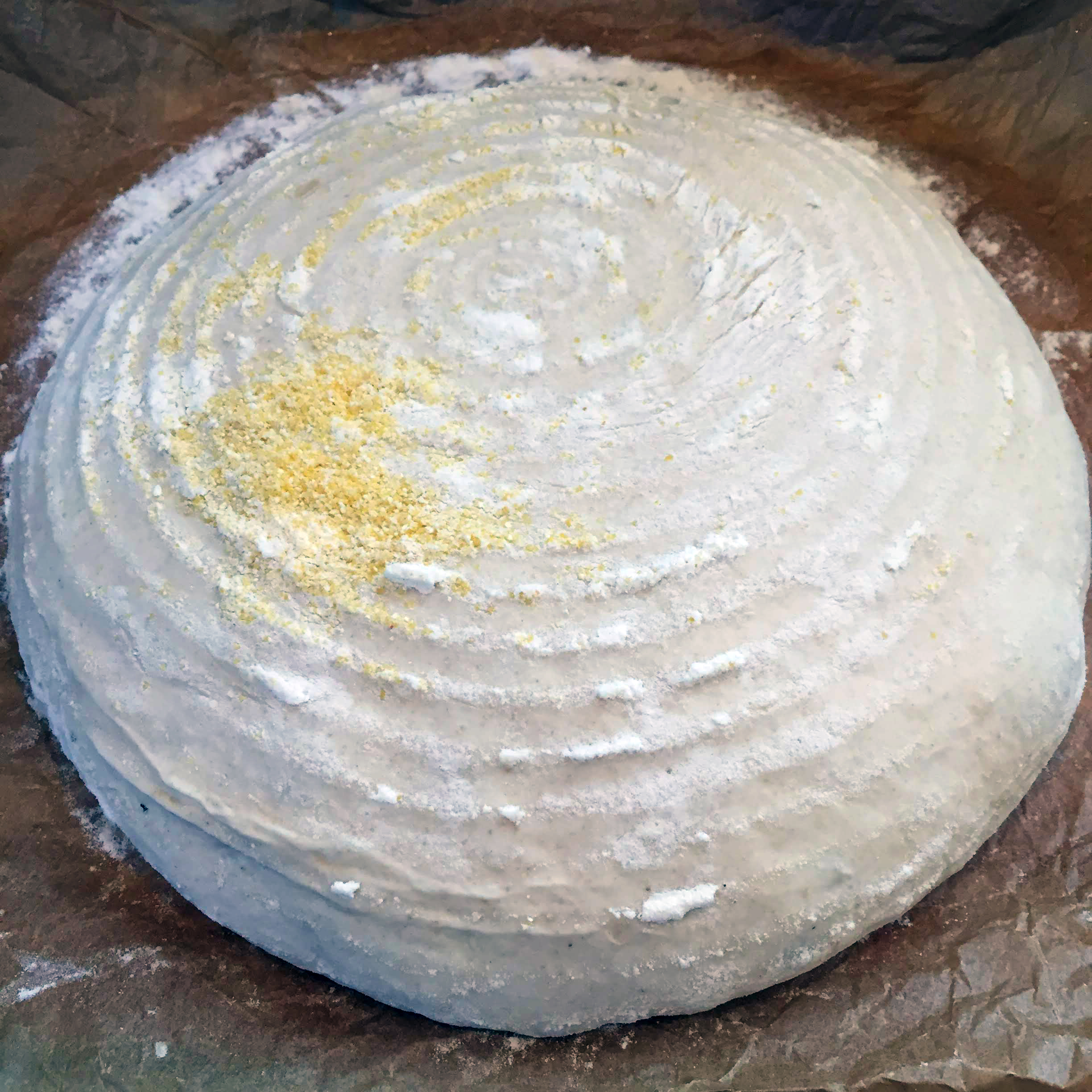 While we wait for the oven’s signal, Emily turns on the TV so that I can view the “Air” segment of Michael Pollan’s Cooked—the segment that, says Emily, “did it,” by which she means got her totally absorbed in everything about bread. I watch as Mike turns bread into a super food—something ethereal, something sacred. Flour and water won’t keep you alive, he says, but bread will. And what is bread but flour and water combined with air? Among other things, I learned that it’s the air that transforms the ingredients into bread and makes it “democratically available to all.” The art in bread making is perfecting fermentation; without fermentation, bread lacks nutrients. In today’s industrialized world, where bread has more than 30 ingredients as opposed to nature’s three and is made with commercial yeast, which is fast-acting fermentation instead of the inherent slow process, bread has become something other than the natural, nutritious and delicious food it was meant to be.

“This is going to be good.”

The oven signals us for the second time. Emily’s nervous but as she takes the lid off the pot and looks down at the big, plump rustic bread she’s made, she smiles. “She’s got lots of oomph; lots of chutzpah,” she says. “This is going to be good.” 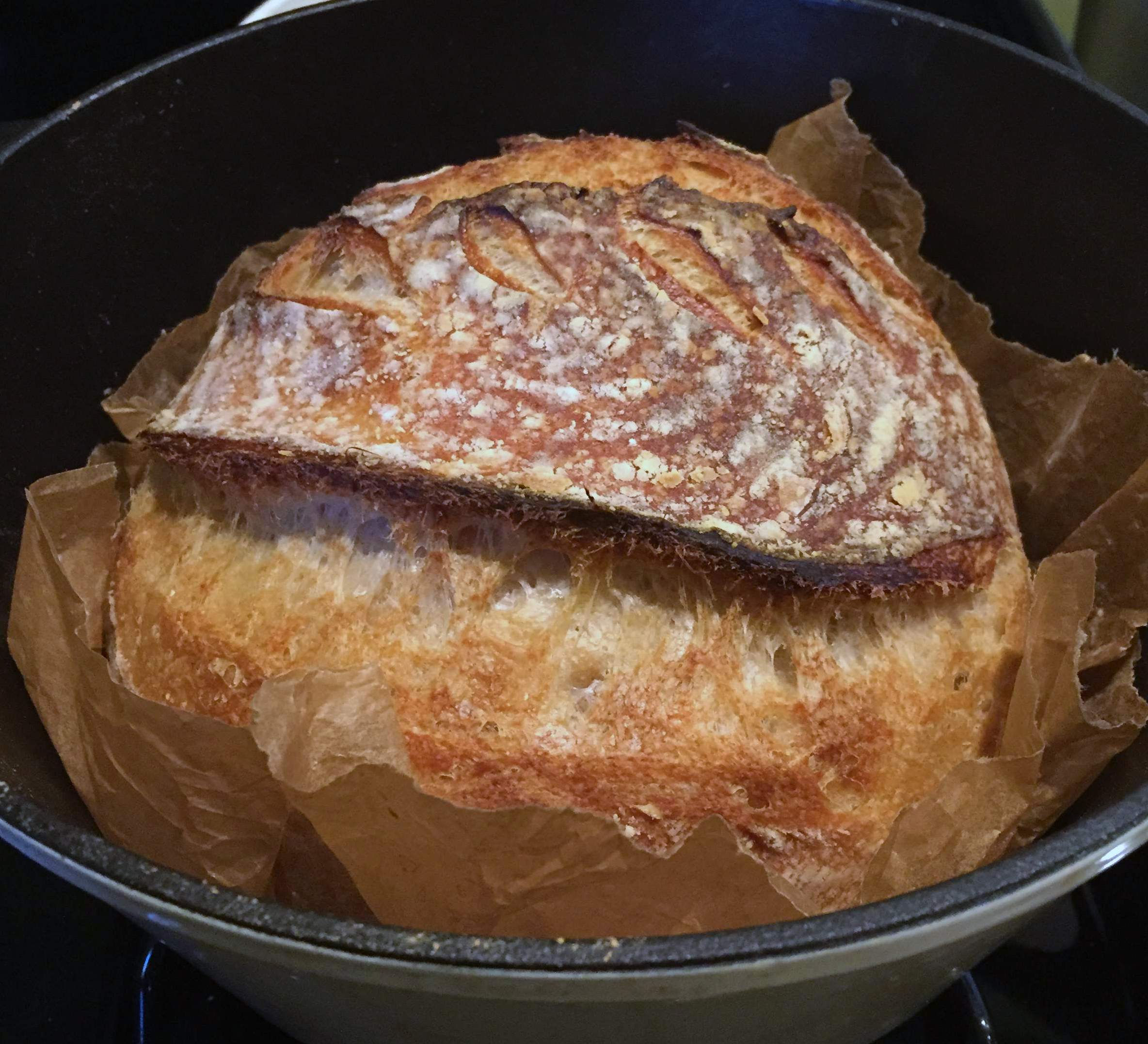 Emily taps the bottom of the bread and tells me that the hollow sound means it’s done. What it will look like on the inside when we cut it, is still a mystery, she explains and she says that the inside is called the crumb. “I will say, I am very happy with how this bread looks. It’s like an adventure every time but I am getting more consistent.”

“She’s so cute!” Emily exclaims. “Okay, I’m enamored of it right now, Eva, but I’ll get over it by the time she cools—and then we can eat.” 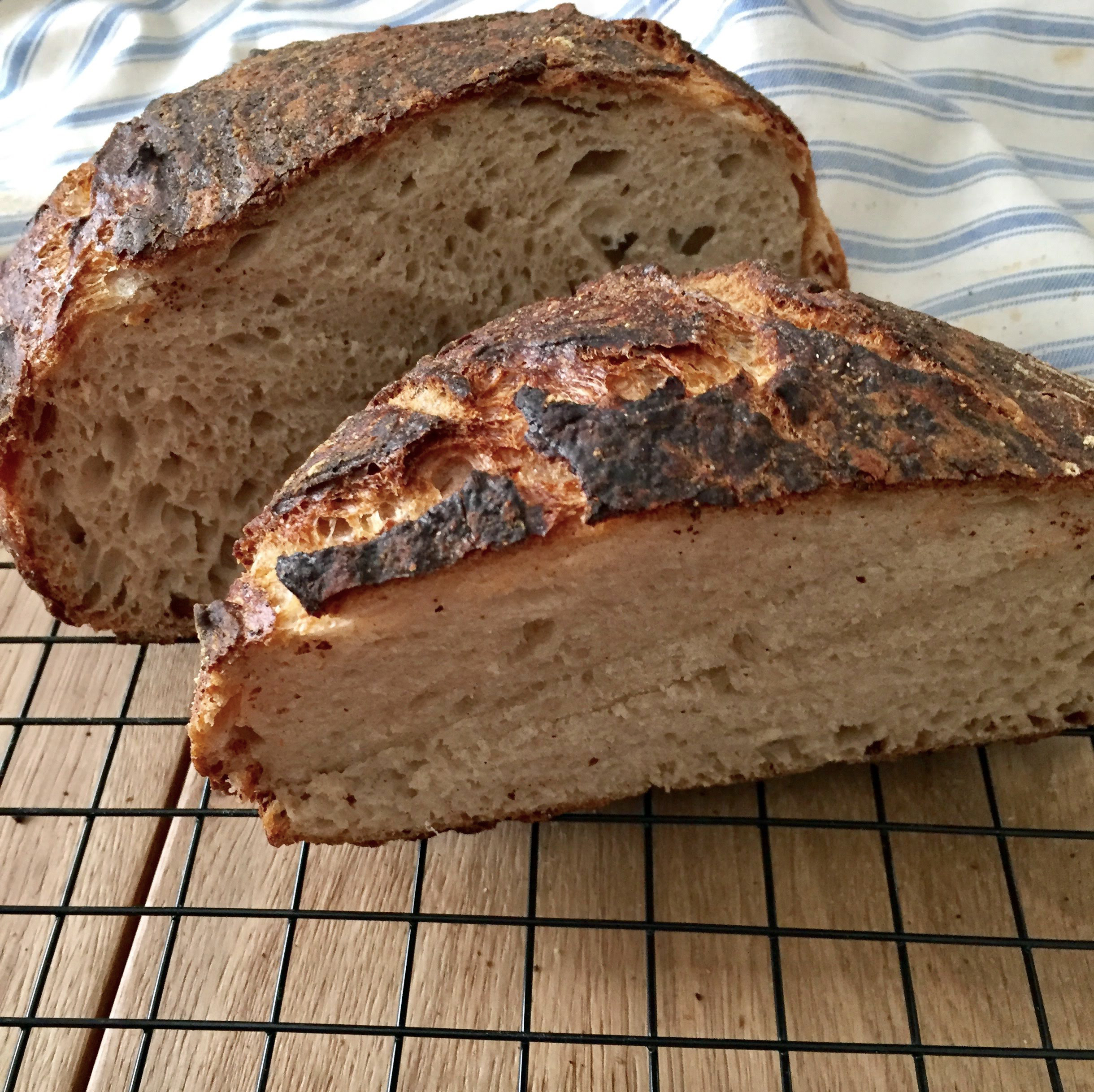 A first cut into airy sourdough (photo by Emily Jones).

When the bread does cool, we place it on Emily’s picnic-style dining table along with a cutting board of butter, jams and cheeses; an Emily-made Thai curry soup; and a bottle of Chardonnay. The scene looks picture-postcard perfect. Emily cuts into the bread and it’s gorgeous with an intricate pattern of holes. 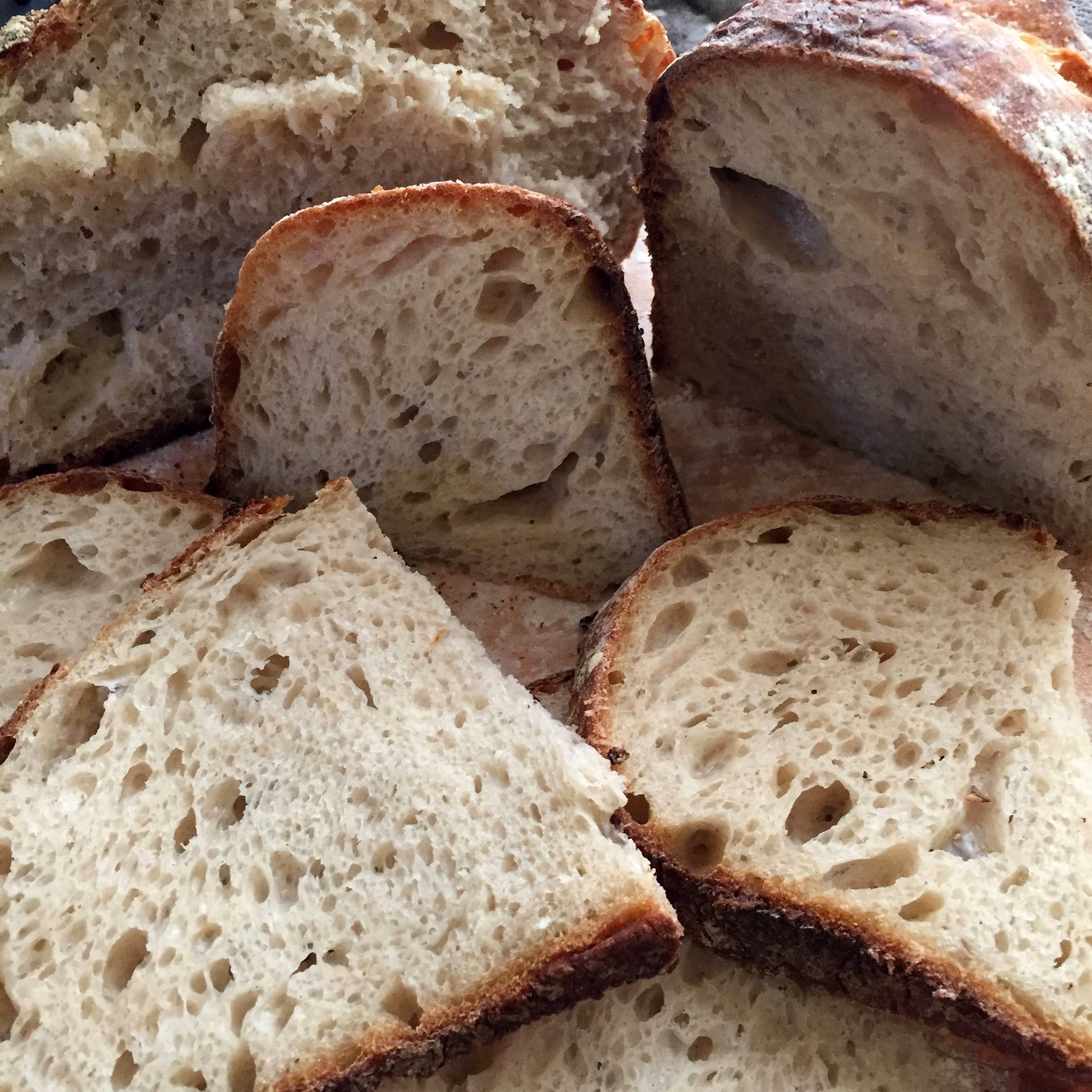 Go ahead, sniff your screen (photo by Emily Jones).

The taste of the crispy, crackling, toasty crust combined with the tender, flavorful interior is almost impossible to define. Maybe not too tangy with a mere hint of sour are the right words. 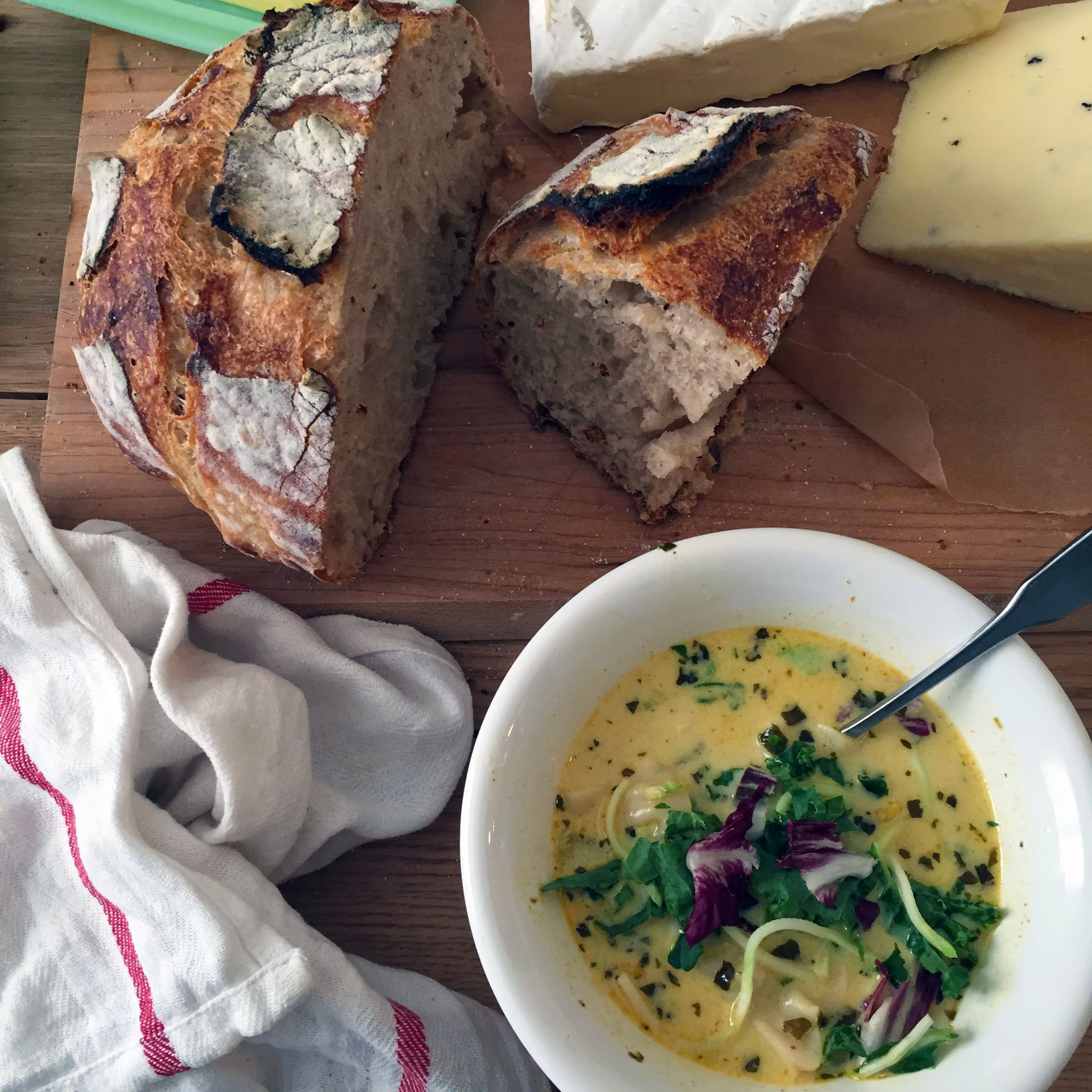 The finished loaf with Emily’s soup (photo by Emily Jones).

I’ll get another chance to describe the taste of bread when it’s my turn to bake. Emily has given me a No-Knead Artisanal Bread recipe that’s supposed to be simple enough for me to make (though is made with commercial yeast rather than a sourdough starter). Then she’ll come to my house and she’ll see if I learned anything about the art of bread making or not. I don’t know if I’ll use the same flour the recipe calls for, as the type of flour can affect the bread’s texture (I did learn something!), but I think I’ll cook my mother’s Dutch vegetable meatball soup as a go-along. And maybe I’ll go elegant with the bread and use white parchment paper. 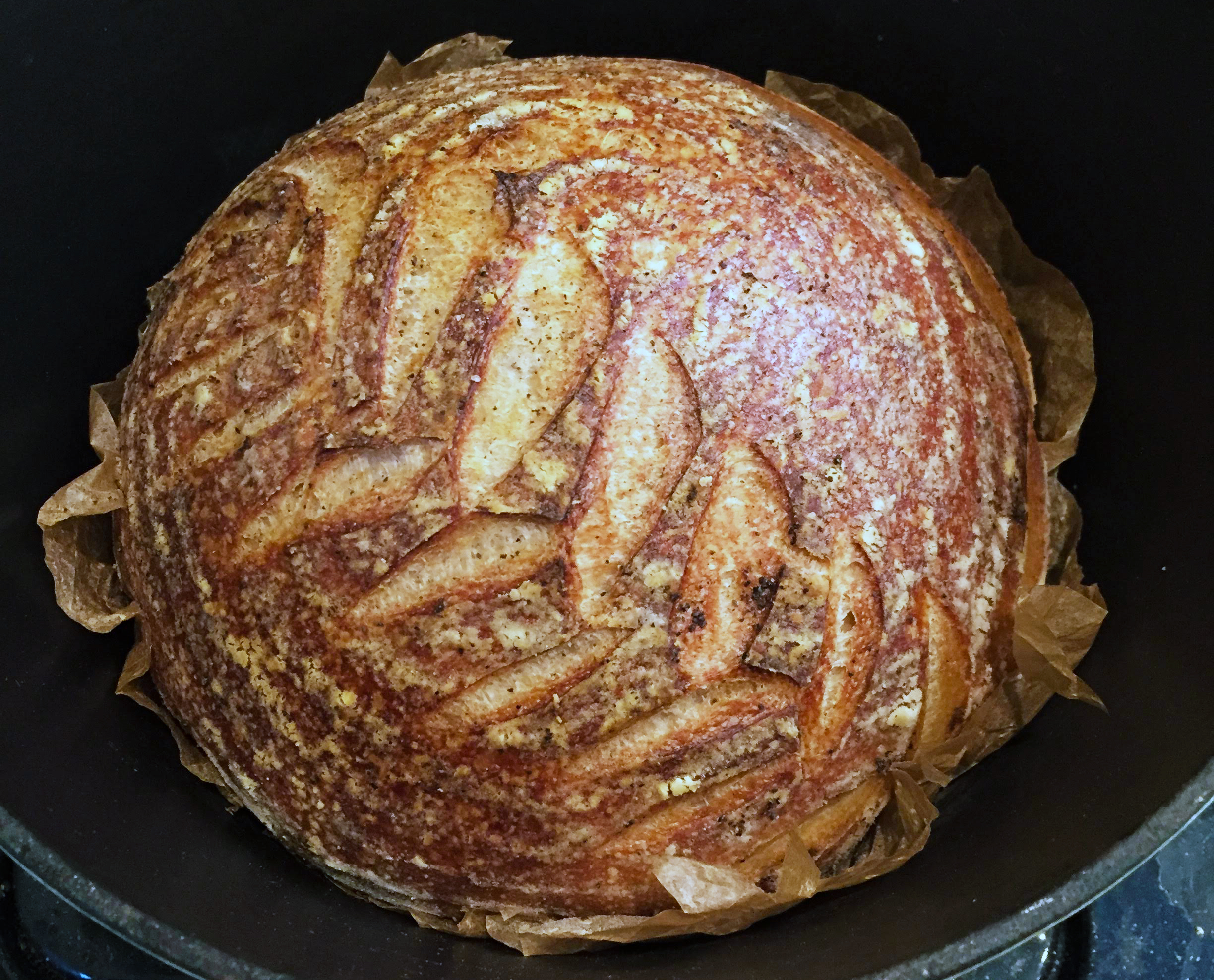 Loafing around (Photo by Emily Jones).

Emily’s starter, “Perpetua,” was started from a dehydrated bit of Erin’s starter (“Constance”), and mailed in a baggie all the way from Brooklyn. “It’s a different process from starting from a live starter,” Emily says. “The technique of dehydrating a starter can also be used to put a starter ‘on hold’ if you know you don’t have time to maintain it, or know you won’t be baking for a while.”

Emily feeds Perpetua, now live, once per week, and keeps her in a small jar (about 100g) in the fridge between baking. For sourdough basics, check out King Arthur Flour’s sourdough guide. 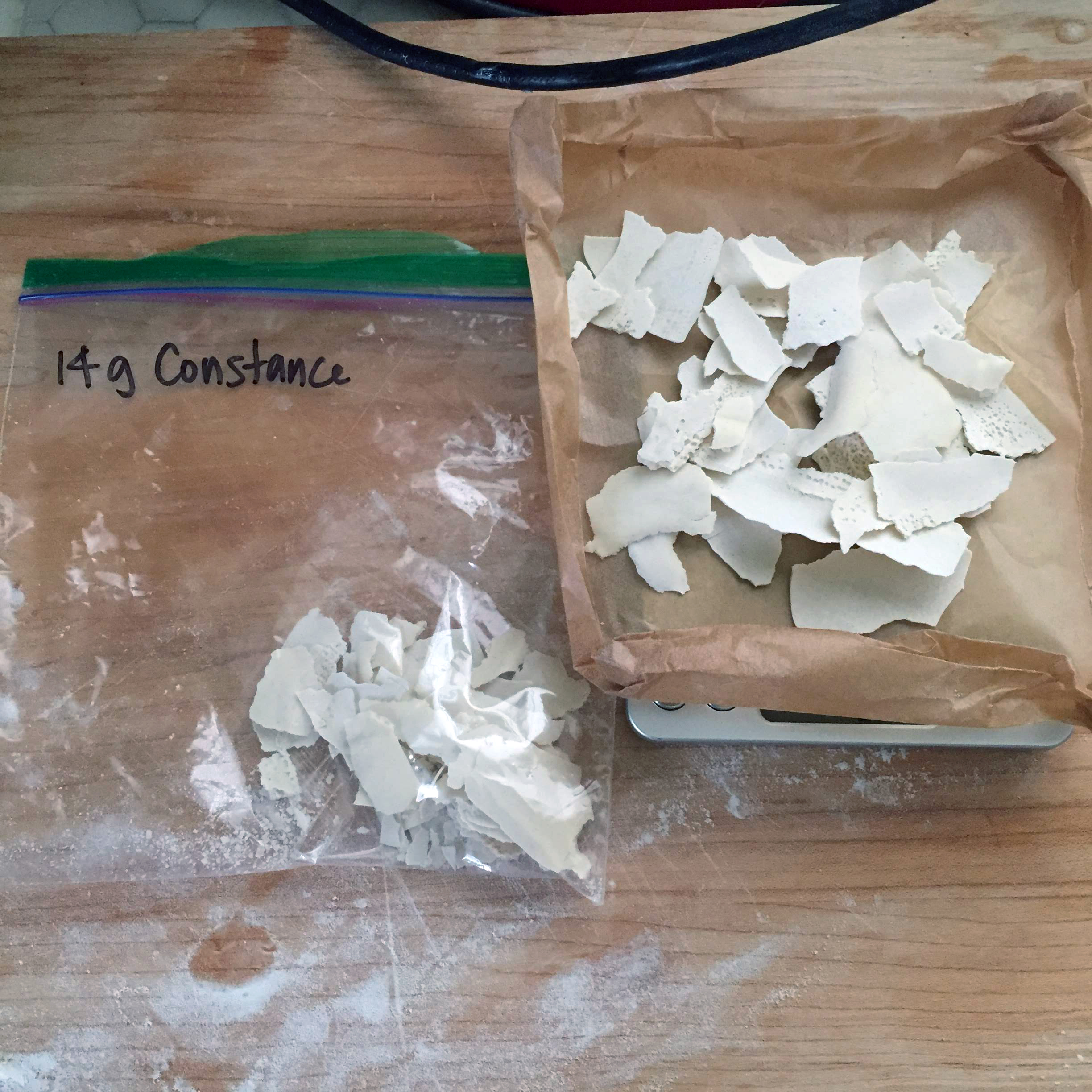 Here is the Jim Leahy no-knead recipe I gave to Eva which does use commercial yeast and is not made with a starter.

Everyone kind of has their own method for making sourdough, but this is the method I’ve had the most success with (although I do modify slightly). It’s from Emilie Raffa’s recipe from Artisan Sourdough Made Simple: A Beginner’s Guide to Delicious Handcrafted Bread with Minimal Kneading, which can also be found here.

Erin also has a super detailed account of her method here that is very helpful.

I’ve started trying some heritage grain flour (like this one) but, I pretty much always use King Arthur flour. Their site is a great resource, too. Lots of good inspo and tips.