Secret Lives: Baran in the USA

Part of our Secret Lives of Seven San Diegans feature, read about the secret life of Baran Pourfard. 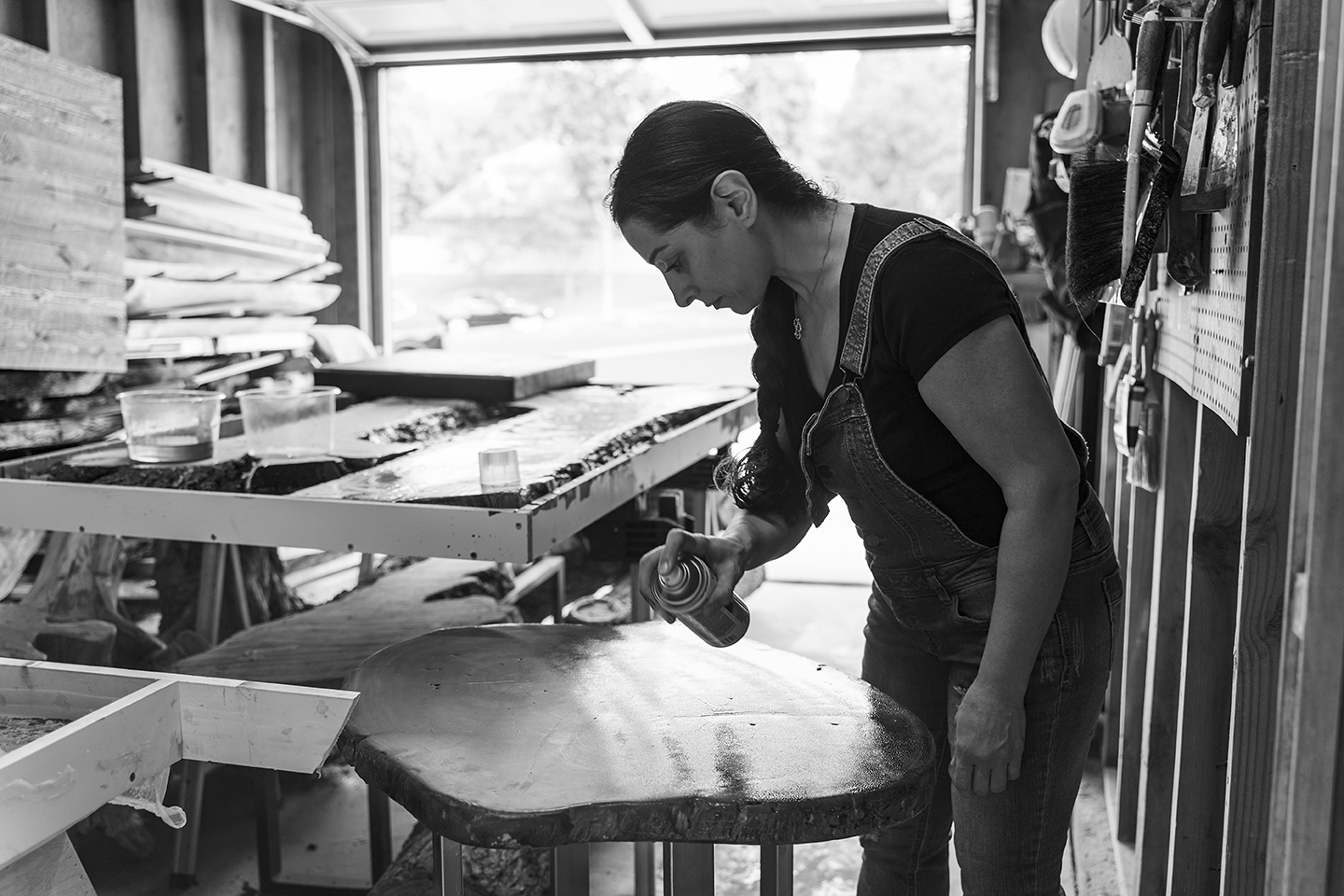 Plucky Heroes and the American Dream

Her story reads like a Horatio Alger novel, if one of Alger’s plucky heroes had been an ass-kicking, gender-stereotype-smashing, black-belt athlete-scholar from Iran. Indeed, Baran Pourfard’s day job as store manager and design consultant at Comfort Furniture Galleries barely hints at the talents and life story of someone in full-throttle pursuit of the American Dream. She arrived in the United States in 2007 with less than $200 in her pockets and little in the way of English language skills; the date was Sept. 11. “I just bought the ticket because it was cheaper than other days,” Baran says. “And that was the reason it was cheaper, because no Middle Eastern person wants to go to the United States on Sept. 11.” 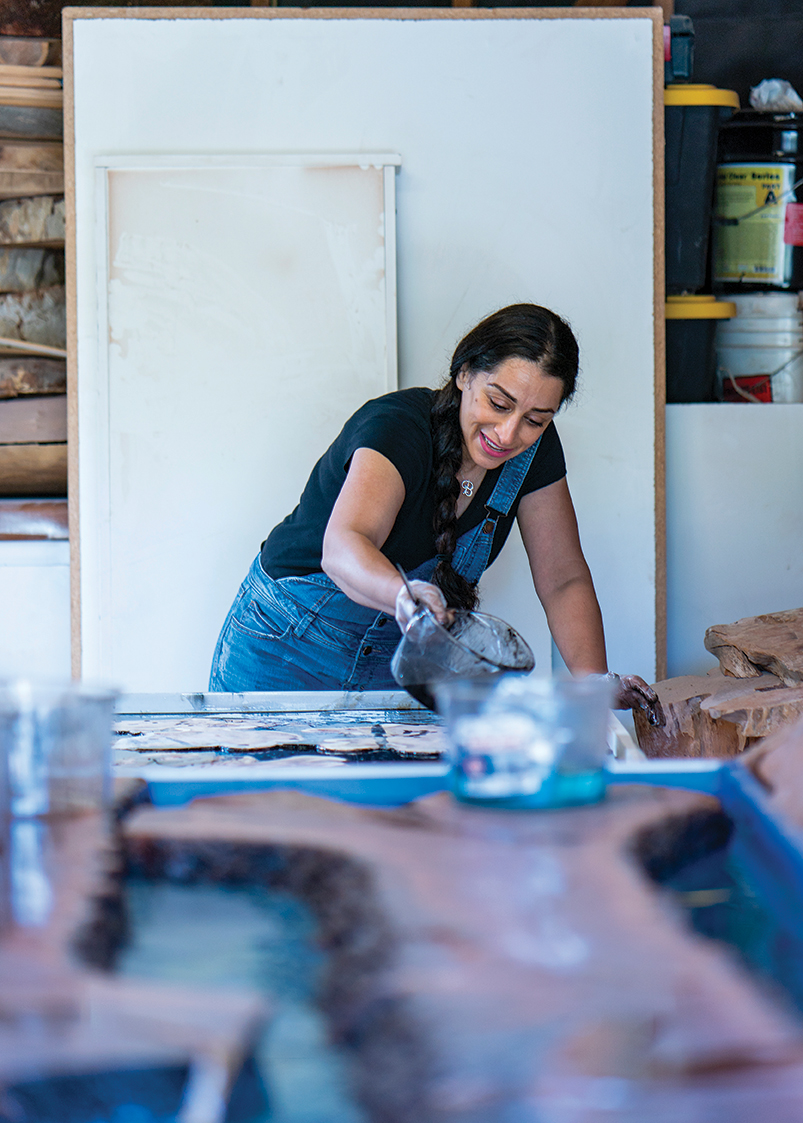 An Olympian Hits the Books

She landed her first job here thanks to the fact that she is a sixth-degree black belt in taekwondo and a former member of Iran’s national team, a perennial powerhouse in the Olympics and other international competitions. When a martial arts school saw her pedigree, she became an instructor on her third day in America. Less than a month later, she also picked up a gig repairing rugs, a skill she took a class for shortly before departing for the States.

With two jobs and no car, she worked every day for nine months, coming home at midnight only to crack open English-language textbooks. “It was really hard,” she says, “but those days made me feel like a fighter again. I felt like I was in a very important chapter of my life. Most nights I would fall asleep on my books.” 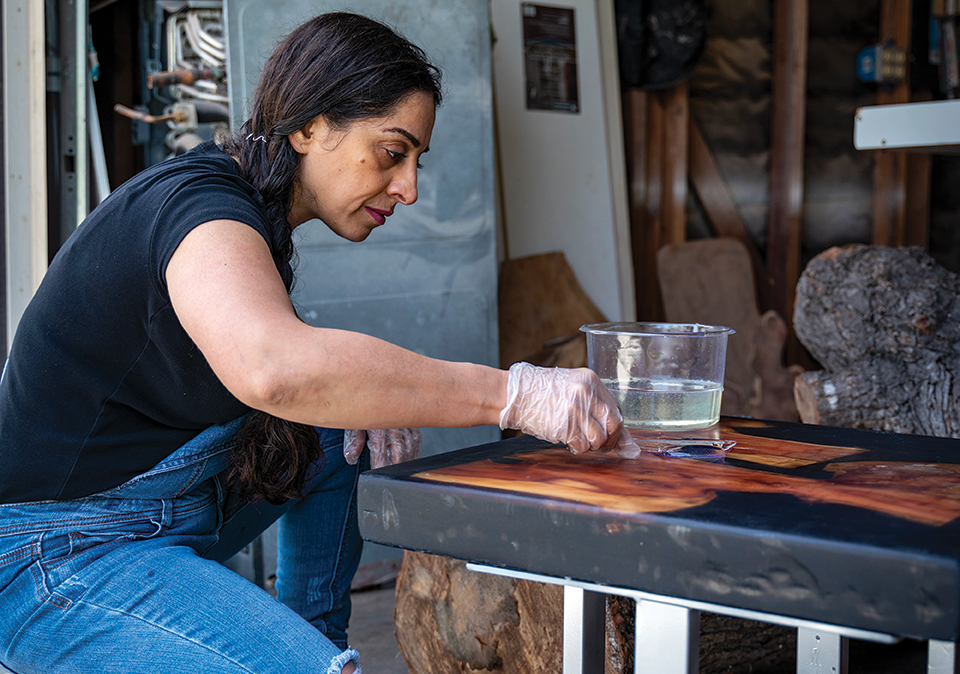 Baran adds the top layer of resin to a table.

Failure is Not an Option

And failure was not an option, as her father, a former member of the Iranian wrestling team, made clear. “I called my dad. He said, ‘There is no bridge. I broke your bridge behind you; you cannot come back. You have to make it.’” 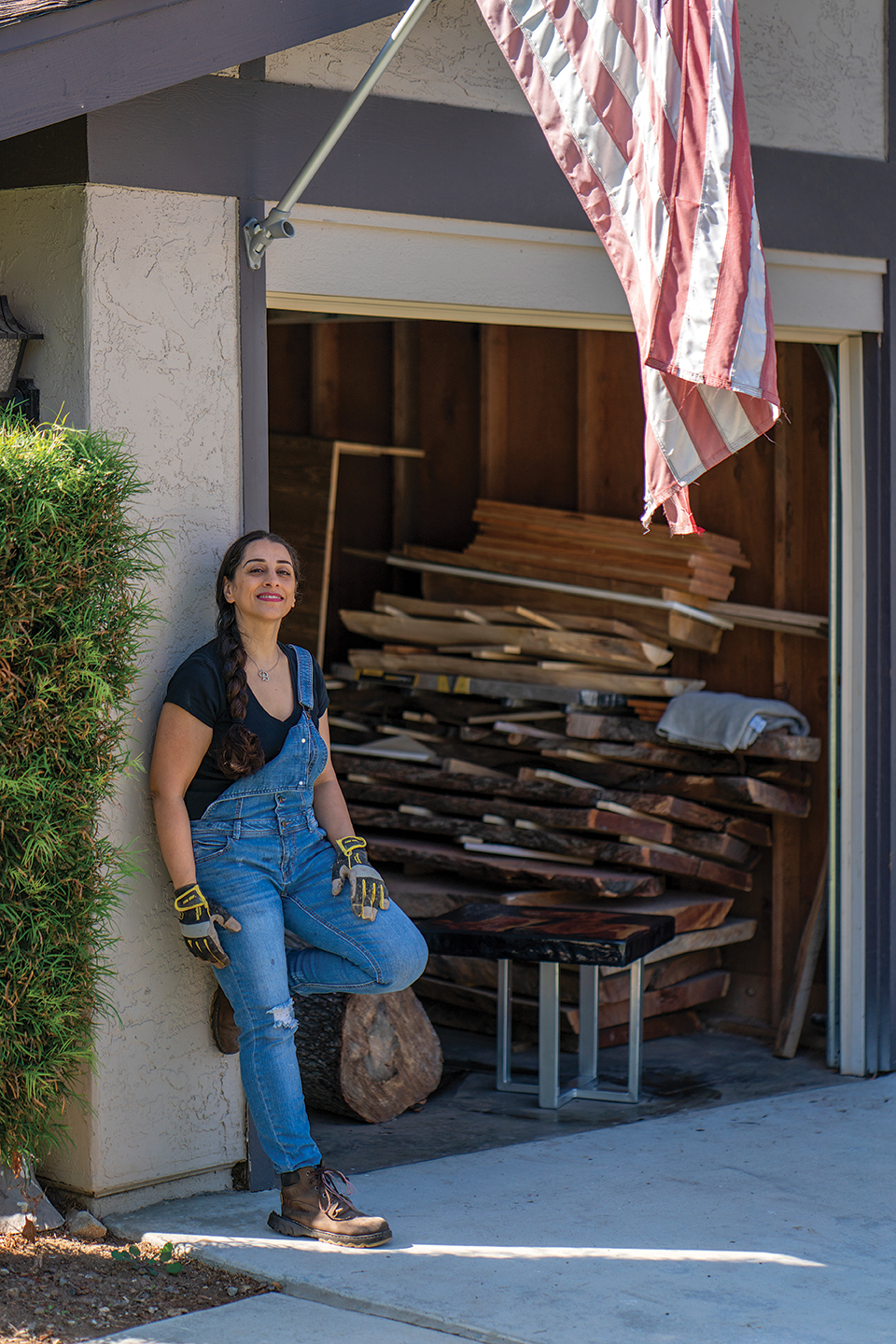 She eventually landed with Comfort Furniture, where she has been for 10 years. And given her background as an honors student with a bachelor’s degree in interior design and an MBA in international marketing from the University of Tehran, it’s no surprise she has a cascade of glowing Yelp reviews for her work at the decades-old, family-owned furniture store.

But Baran has now set about mastering another skill: furniture maker. Though her grandfather was a skilled woodcarver whom she would watch for hours as he made simple household items, he never taught her how to do it. “Girls were seen as delicate and should not do things like that,” she says. So with an assist from a woodworking class at Palomar College, she began making tables that have grown increasingly exotic and artistic, incorporating live-edge wood, resin and metal. Her passion for it has only grown and she has launched her own side-business, Queen Baran Design.

“When you work with wood you have to really love it because it’s a super-hard job,” she says. “But I have started at 6 or 7 o’clock in the morning and finished at 10 p.m. and I didn’t even notice it was that many hours.

“Now when I work with a piece of wood, most of the time I’m talking to it. I talk to it, I feel it, I see the grains and I try to understand what will make that piece of tree more beautiful. So all of a sudden my art becomes something supernatural.” 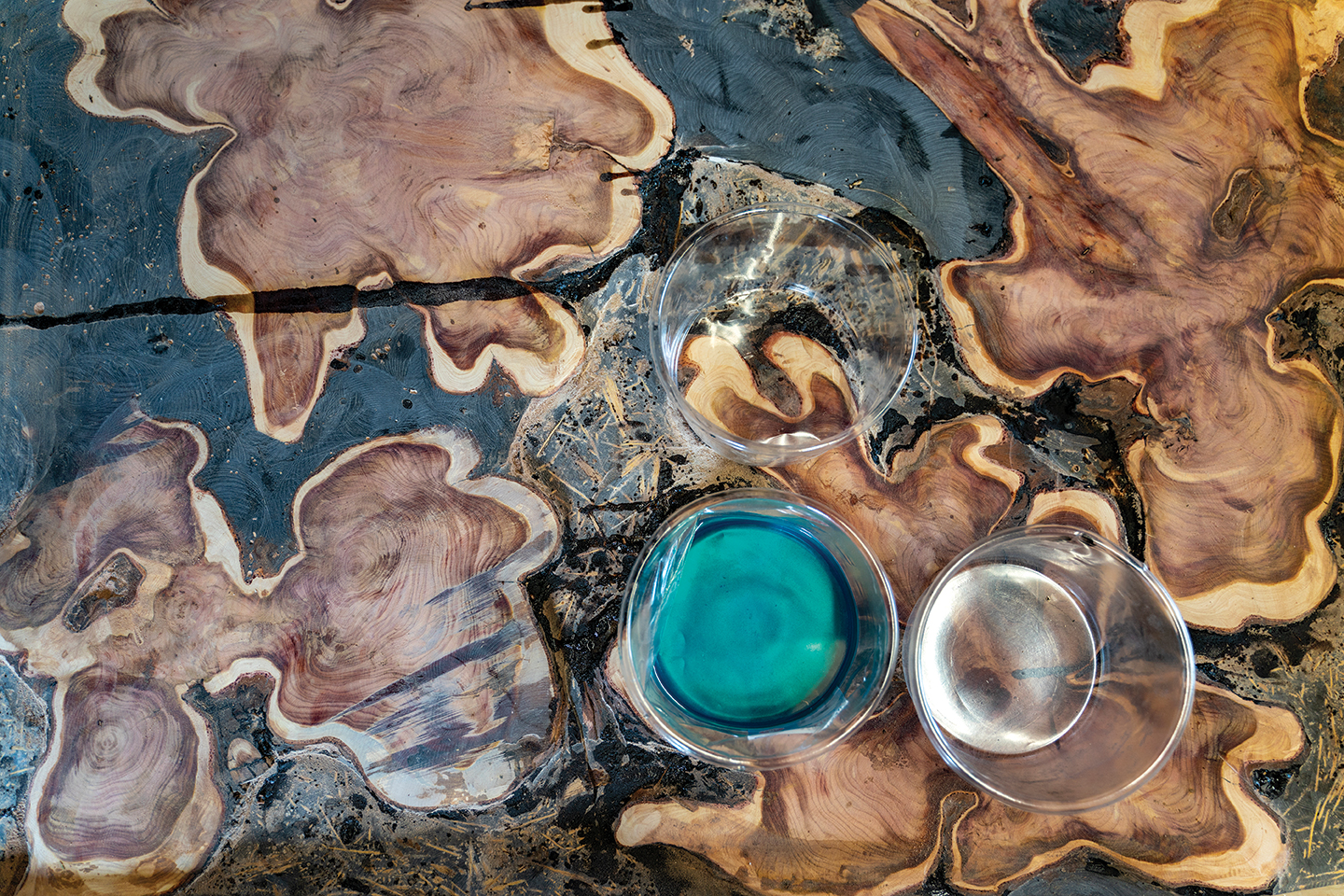 A Gift to a Welcoming Home

And she feels the need to continue to push and prove herself not only as an artist but as an immigrant. “Every day of my life I try to be a better person because I think I owe this land,” Baran says. “The American people have been so kind to me and they accepted me, so I think whatever I do—as a designer, as a woodworker, as a teacher, as a taekwondo trainer, as an athlete, as a woman—I need to be the best of myself because this land is so open, so giving.” 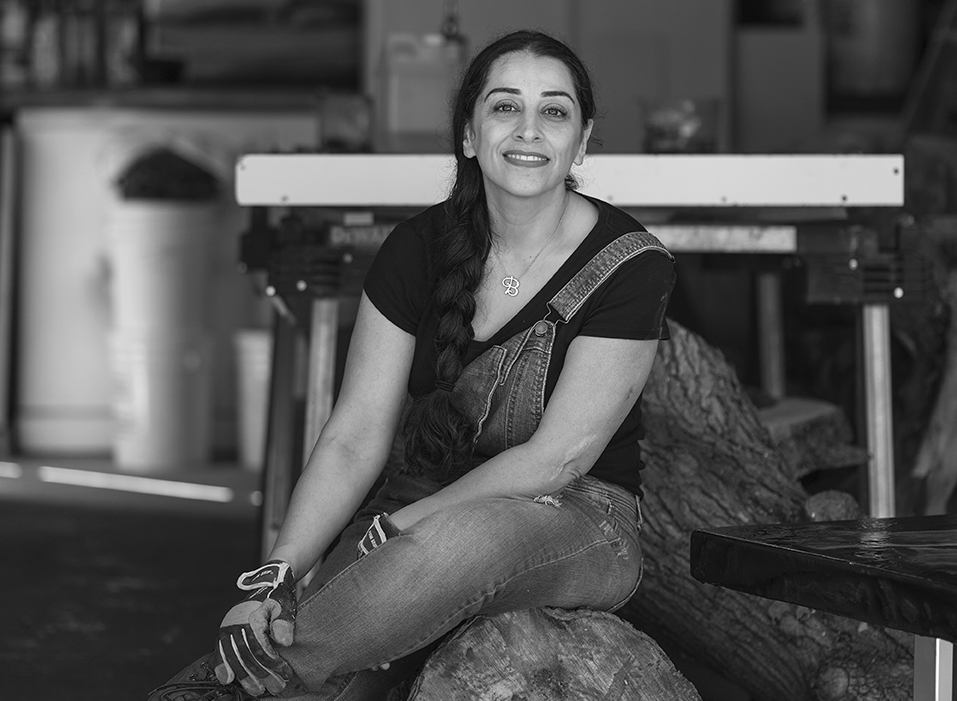