Clay + Craft's Nicole Novena shares the best places to get drinks, foods and goods by the sea 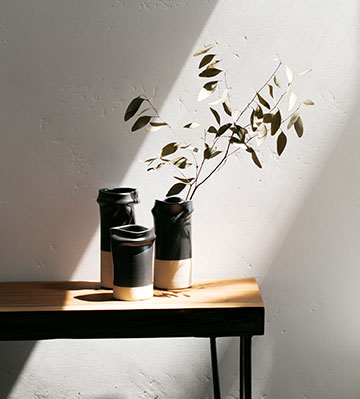 Cardiff artist Nicole Novena has been in the marketing biz for 15 years, but two years ago when she and her family—husband, Max; son Roark, 4; and 5-year-old Hooper, their Burnese mountain dog—moved from Florida to San Diego (to be closer to in-laws), she decided it might be time to shift gears.

Ceramics has been a hobby of Nicole’s since high school. Now she’s giving the creative-release-turned-full-time gig a whirl—slowly (she’s still doing marketing part time) and steadily, just like the simple and beautiful pieces she creates through the company she launched in 2016, Clay + Craft. 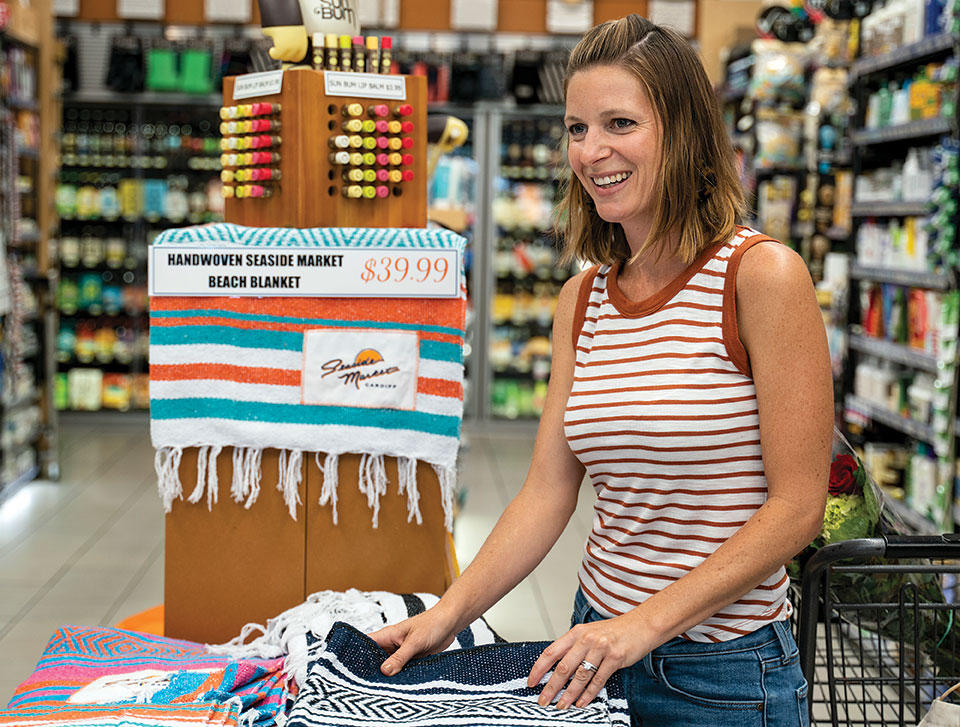 She creates at her wheel in her home studio in Cardiff near Glen Park, which happens to be a short walk from her favorite places to shop, relax, eat, drink and find inspiration. While her pieces fire away in the kiln, she shows me around the neighborhood.

She asks me (and photographer Gary) to meet her at this brick-and-mortar coffee shop. There’s no name on the storefront, just five painted lines in sort of an inverted pyramid design. Little do I know, it’s the logo for this new hot spot. And people in this neck of the woods are clearly in the know. Activity’s buzzing this morning with customers standing at the bar-height tables out front and sitting on the side-by-side benches with their dogs in the parking lot 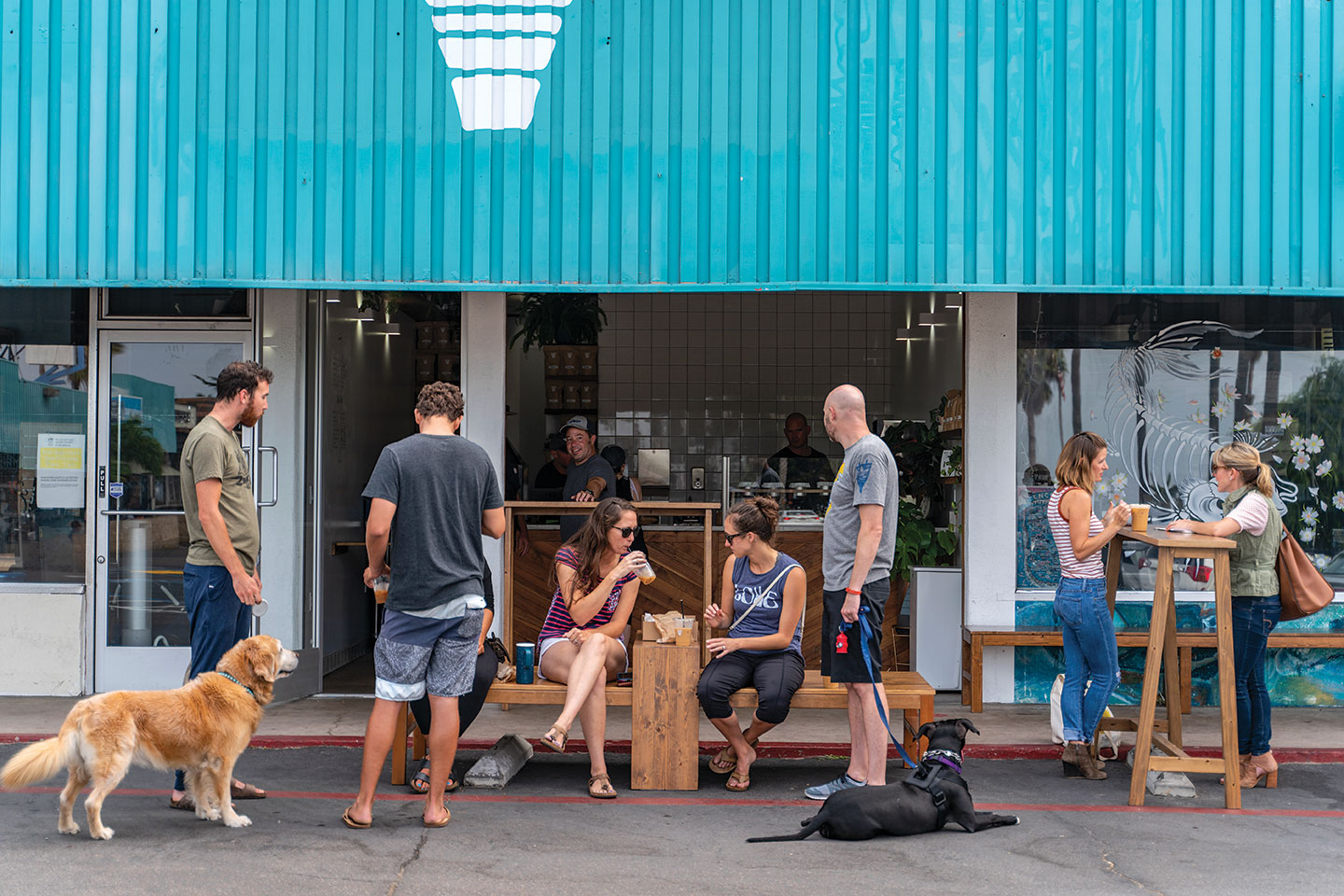 Nicole, who is creating a custom pour-over brewer for BUMP, tells me the company used to be a food truck and farmers market vendor, and just recently moved here. She pops in after a run and always orders the iced mint mojito (it’s non-alcoholic), made with muddled mint, brown sugar, cream and cold brew. “This place adds a lot of personality to Cardiff’s already awesome vibe,” she says.

This is also a regular resting spot along her several-times-a-week walks with Roark and Hooper. Roark likes the orange juice, squeezed fresh from Temecula citrus fruits and the empanadas.

The Novena family comes to this eclectic eatery, tucked away on Aberdeen Drive, weekly. On either Saturday or Sunday mornings, Nicole starts her day with a coastal run and Max and Roark (and sometimes Hooper) head here to claim the first table (it opens at 9 a.m.) to watch cartoons on the big screen and order the same breakfast every time—a burger for Roark and huevos rancheros and a Manmosa (that’s champagne with a splash of OJ served in a large mason jar) for Max. Nicole joins them when she’s done and finishes whatever her son left behind. “It’s such a great way to start the weekend,” she says. 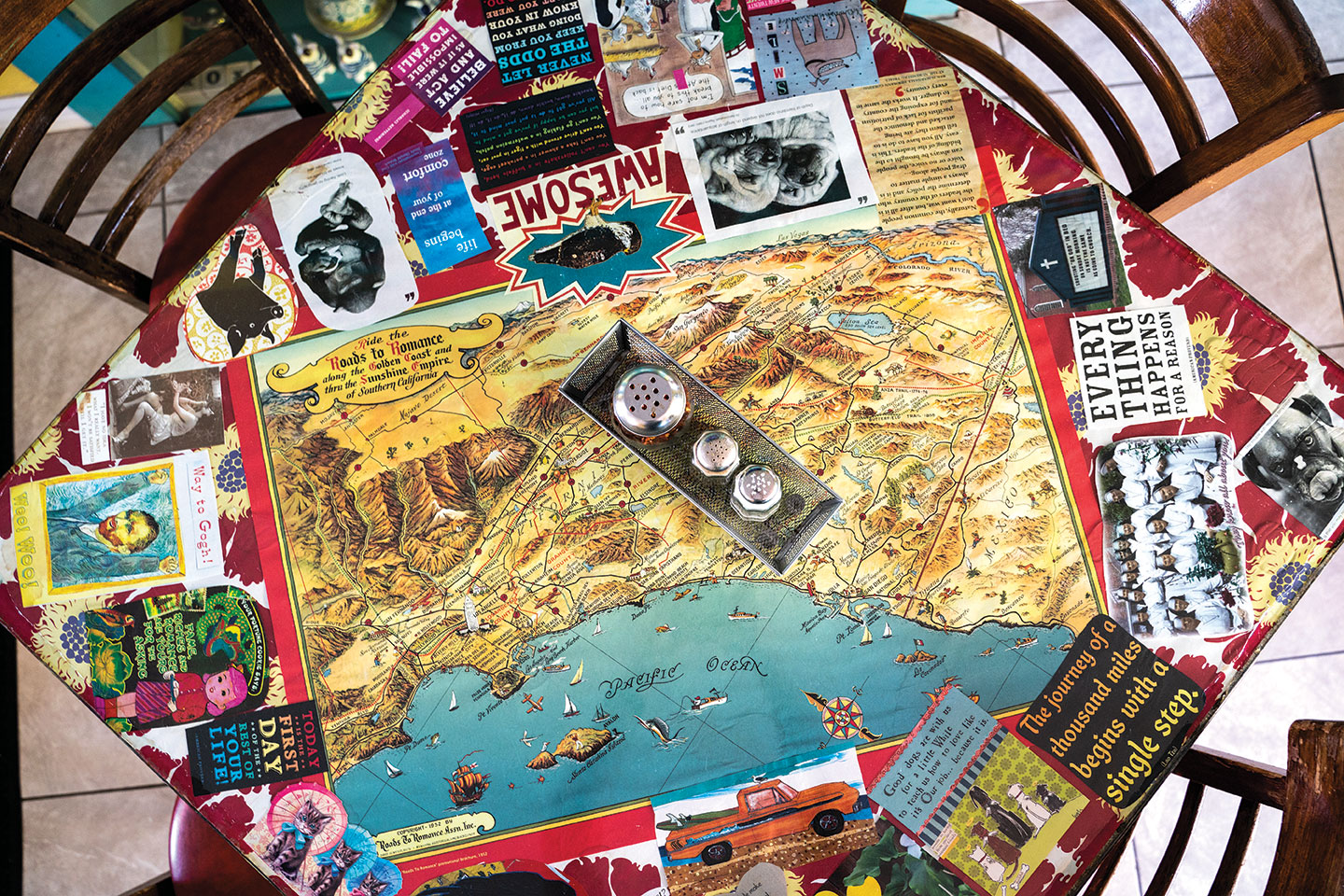 Tables at The Besta-Wan Pizza House are a feast for the eyes, decorated with maps, postcards, pictures, cards and other papers.

They also come once a week for dinner and sometimes order the famous pizzas this place has been making since 1965, or a burger, sandwich, salad or something else from the extensive menu. “They give fortune cookies at the end,” and some of the left-behind fortunes (along with lots of other ephemera) end up glued under the glass tabletops as decor. 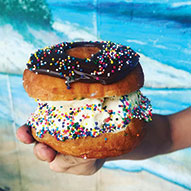 “This place is definitely part of the Cardiff culture,” Nicole says. “It’s a place you frequent if you live here. It’s just what you do.” It’s also Roark’s favorite place on the planet (OK, maybe not on the planet, but close). So Nicole uses their signature surfboard cookie or a cake pop as a reward for her preschooler. But she doesn’t leave without a treat for herself too. She fancies an old-fashioned chocolate or maple-glazed confection.

This boutique, selling clothing, accessories and gifts, next to Besta-Wan, is Nicole’s absolute favorite place to shop. “Maria [Thornton, the owner] stocks an amazing collection of women’s and children’s clothes and is beyond supportive of local artists,” Nicole says. (She carries a sampling of Nicole’s work.) “A lot of my son’s clothes come from here,” she says of the high-end offerings that include labels like Nununu, Ice Cream Castles, Appaman and more. “And sometimes I’ll splurge for myself too.”

We walk around the corner and just up the street to Nicole’s neighborhood grocer for the Cardiff Crack, something I had only heard about but never seen. “Word on the street is that they marinate it in a cement mixer,” Nicole informs me. 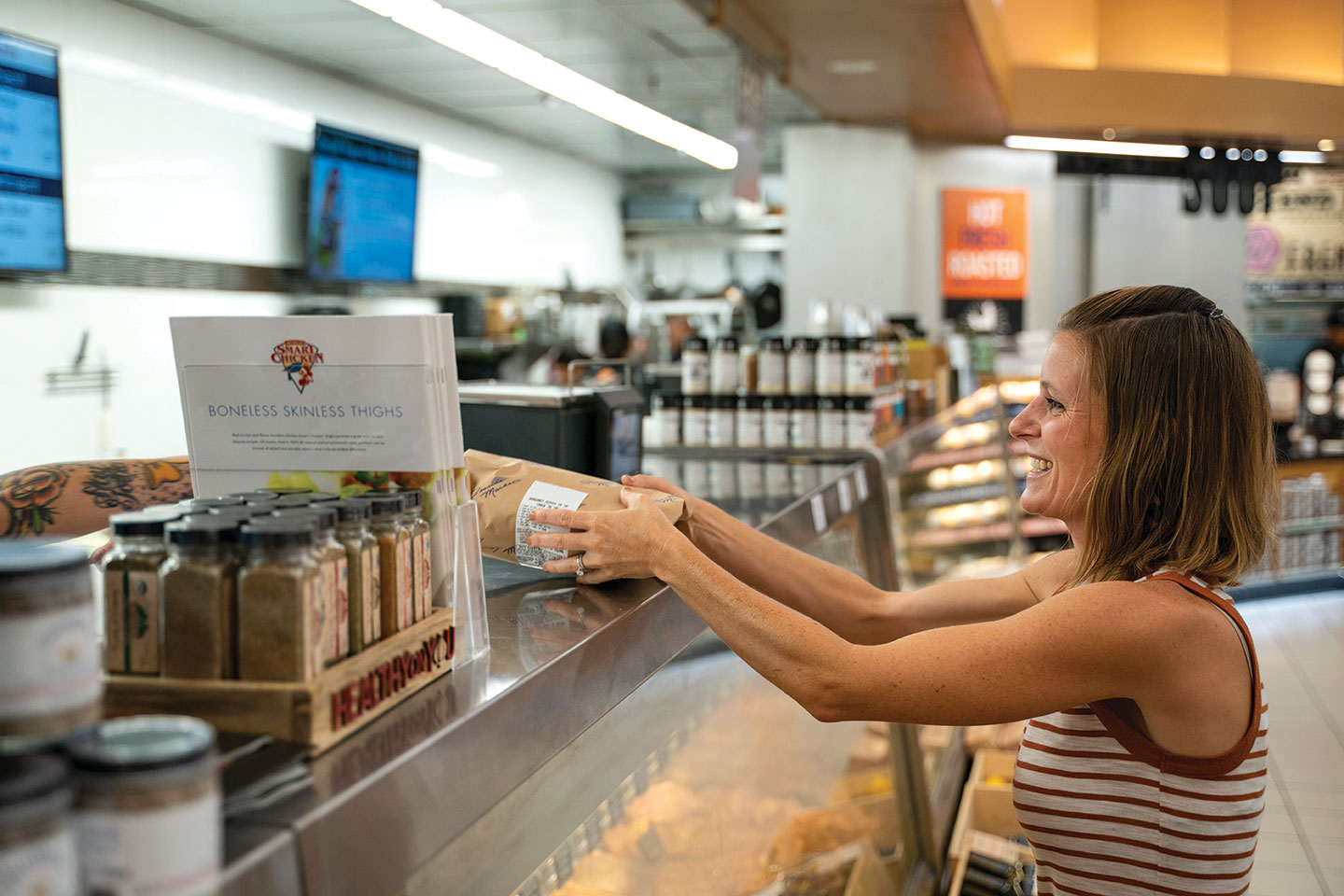 “Word on the street is that they marinate it in a cement mixer,” says Nicole.

We’re talking about Seaside’s famous tri tip carved from the bottom sirloin, trimmed and marinated in a Burgundy pepper or spicy chipotle sauce using a top-secret process. Psst…the butcher tells me the marinating process actually happens in a vacuum tumbler that puts like 1,000 pounds of pressure on the meat.

Besides the crack, Nicole shops here for all her meats and produce. “I love all the local produce they stock,” she says. “And if you sign up for their rewards, you get a check for money back twice a year and you get regular emails alerting you to the free item of the week. I’ve gotten floral bouquets, salsa and more. It’s great.” 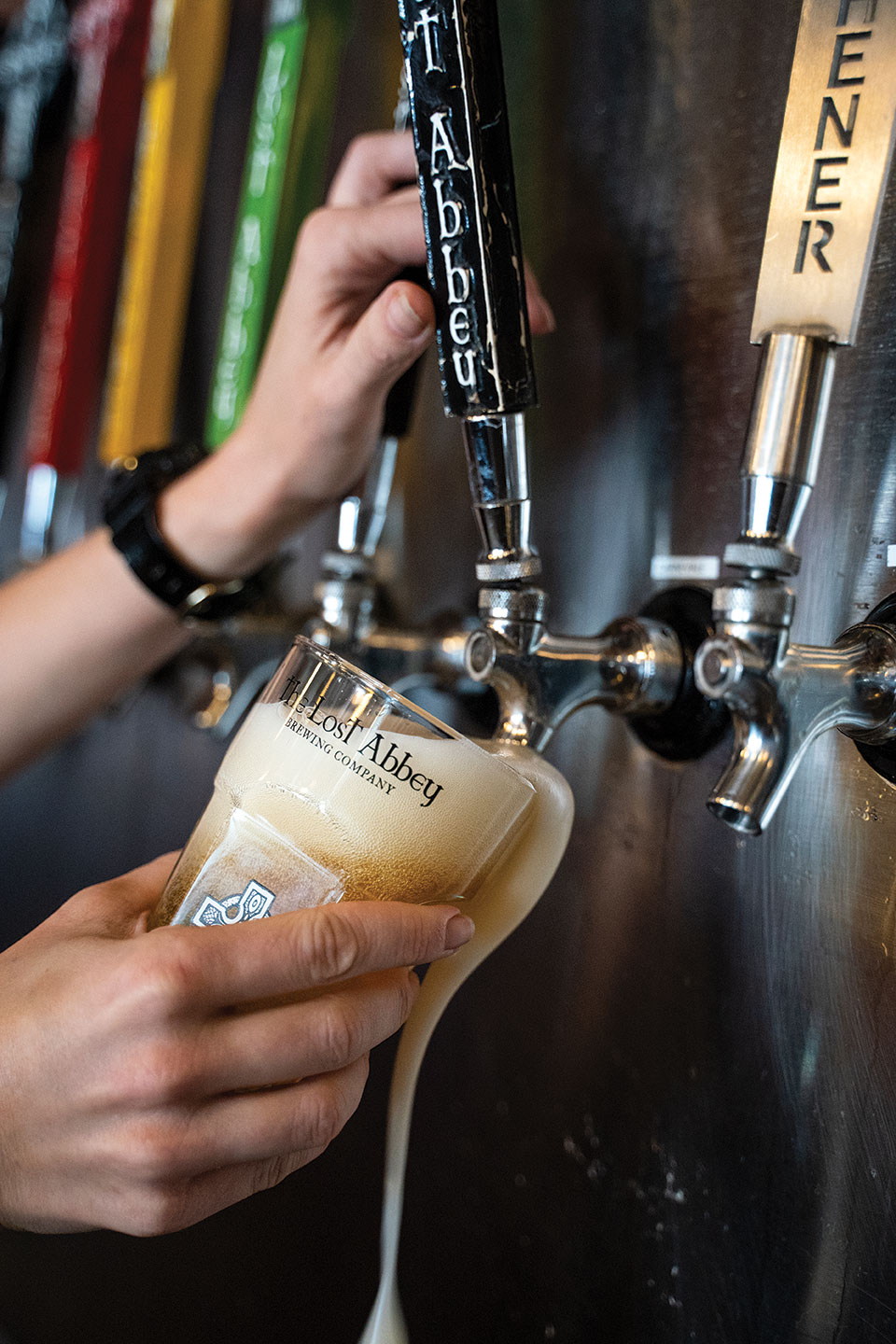 The Confessional by The Lost Abbey

Nicole and Max first discovered this place after their Realtor gave them a gift certificate for it when they closed on their home. Now they come for the “very good beer and the atmosphere,” Nicole explains. She recommends getting a flight to share so you can taste several, but if you want a glass, Board Meeting and Judgement Day, two dark ales, are her favorites. Max prefers IPAs. And though you can’t take the beer off the premises, they frequent the brewery because there is a nice outdoor space for Roark and Hooper, and bonus: East Coast Pizza next door sells pizza by the slice.

The Confessional by The Lost Abbey: 2007 San Elijo Ave., lostabbey.com

Nothing is more inspiring for Nicole than a run along the 101. “I step away from my studio and take a step back from my every day to-do lists,” she says. “It’s my time to think big-picture and dream a bit of where I want to take Clay + Craft.” At least three times a week, she tries to give herself a 3-mile loop that takes her from the famous Kook statue up to Pipes Beach, north of the campground. “At low tide, I run on the sand,” she adds. Then she heads to Swami’s Beach in Encinitas, where she runs the stairs before she heads back either along the 101 or on the beach.