Where the Chefs Eat: Bernard Guillas 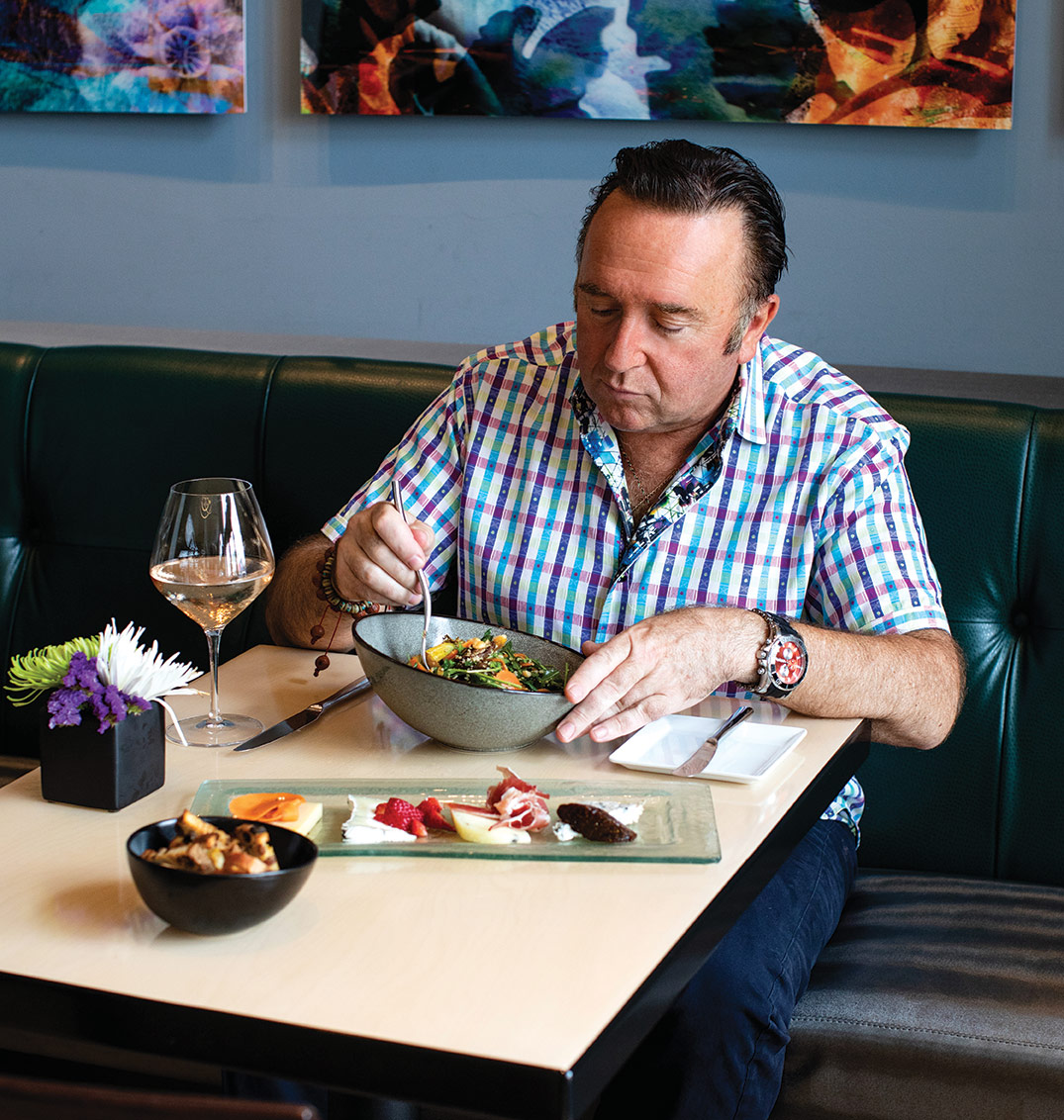 We followed Chef Bernard Guillas around his favorite places to eat and drink in San Diego, and got some insider secrets about his favorite menu items along the way!

Cookbook author and executive chef Bernard Guillas moved from France to Washington DC in 1984 as the sous chef at Maison Blanche under a former White House executive chef. Five years later, he relocated to San Diego and stayed. Since 1994, he’s been the executive chef at La Jolla Beach & Tennis Club and directs the resort’s three restaurants—including the landmark Marine Room—and all its catering. 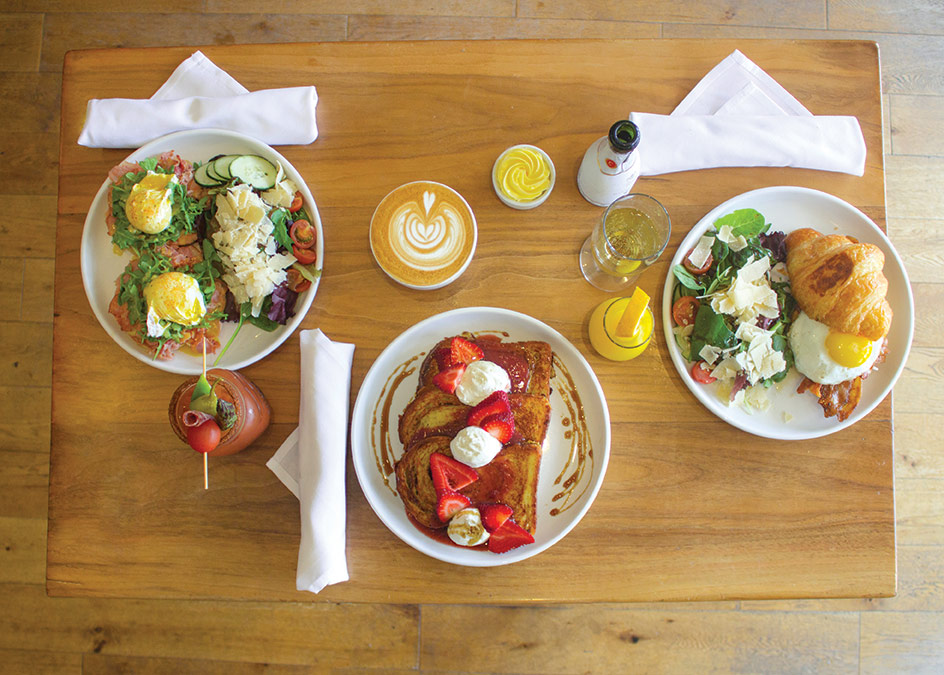 House Benedict is made with prosciutto, brioche french toast is drizzled with balsamic maple syrup and the egg sandwich comes on a croissant at Sugar and Scribe. (Photo: Sugar and Scribe)

For breakfast, he visits Sugar and Scribe, an Irish-inspired bakery that executive chef and owner Maeve Rochford (a good friend of Bernard’s) revamped and reopened in 2015. “She is a positive force of nature and makes edible art,” he says. 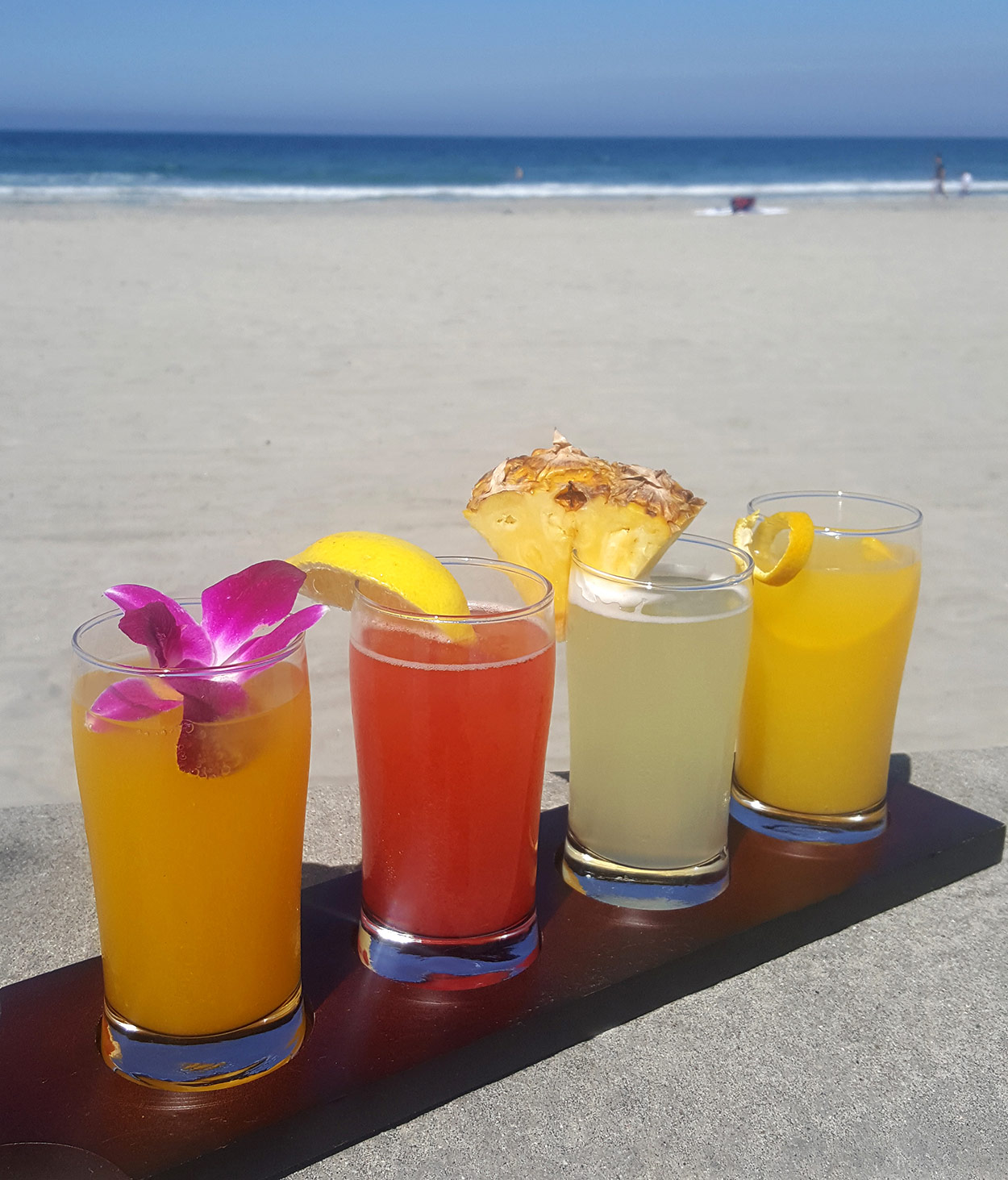 For brunch, there’s no place like the family-friendly The Shores, one of the three establishments Bernard oversees. “I love the patio and the energy of kids everywhere and running up from the beach,” he says. “Plus, Chef Percy Oani ‘Papa Bear’ cooks with his heart and soul.”

Menu favorites: Bring friends and order a mimosa flight; Cabo fish tacos (he raves about the mahi); the Baja omelet with crab meat, avocado, cheddar, cilantro cream and salsa; and a Belgian waffle. 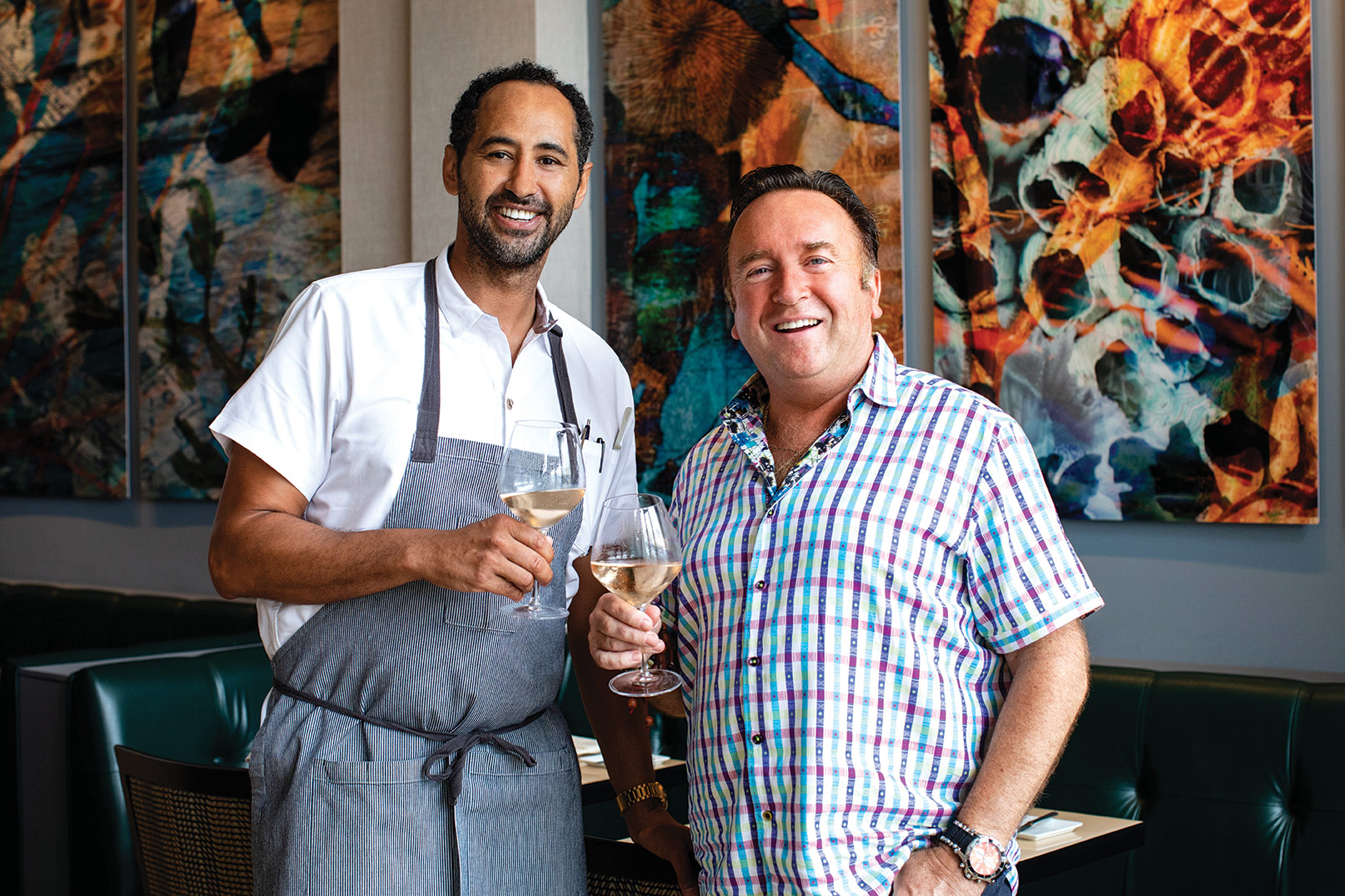 Chef Jason Knibb steps out from the kitchen at Nine-Ten to have a glass of rosé with Bernard. 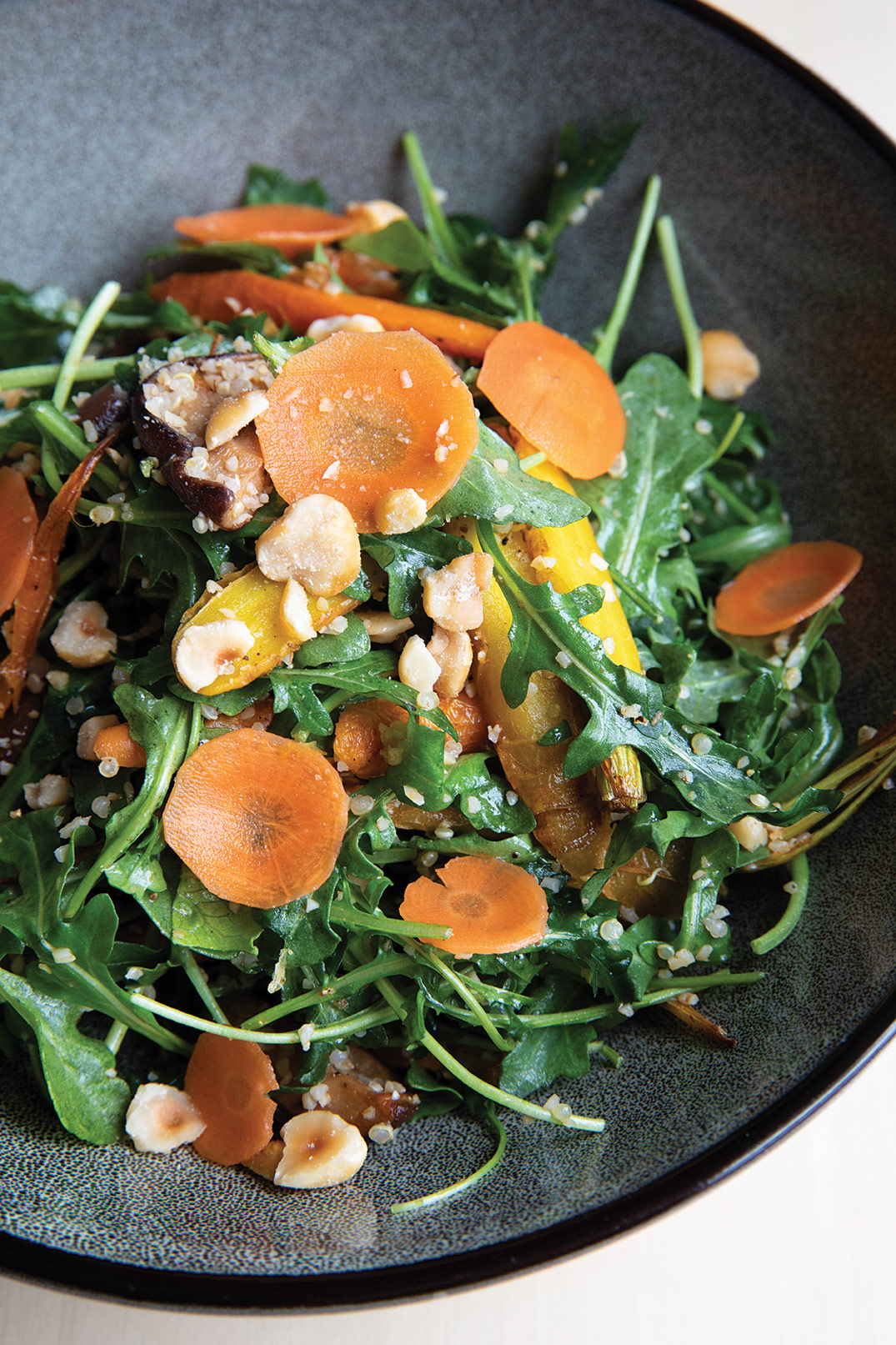 Chef Bernard Guillas enjoys a light lunch with the quinoa bowl at Nine-Ten, a favorite establishment of his for 17 years.

For lunch, I meet him at Nine-Ten at the Grande Colonial Hotel. Bernard says he’s been coming here since they opened in 2001. (The restaurant underwent a renovation last year.) Today, he visits executive chef and friend Jason Knibb, whom Bernard calls a magician in the kitchen.

Menu favorites: Bernard says anyone coming for lunch should get the taste of four cheeses served with accompaniments and the quinoa bowl—made with quinoa, bulgar, roasted baby carrots, roasted shiitake mushrooms, wild arugula, pickled carrots, smoked hazelnuts and lemon vinaigrette—with Pellegrino and a glass of rosé.

For dinner, he recommends Herb & Wood. “Chef Brian Malarkey and I have really bonded, and he has created an electric atmosphere, crafted cocktails and all good things,” Bernard says of the lovely Little Italy eatery with blue-streaked walls and lots of greenery. 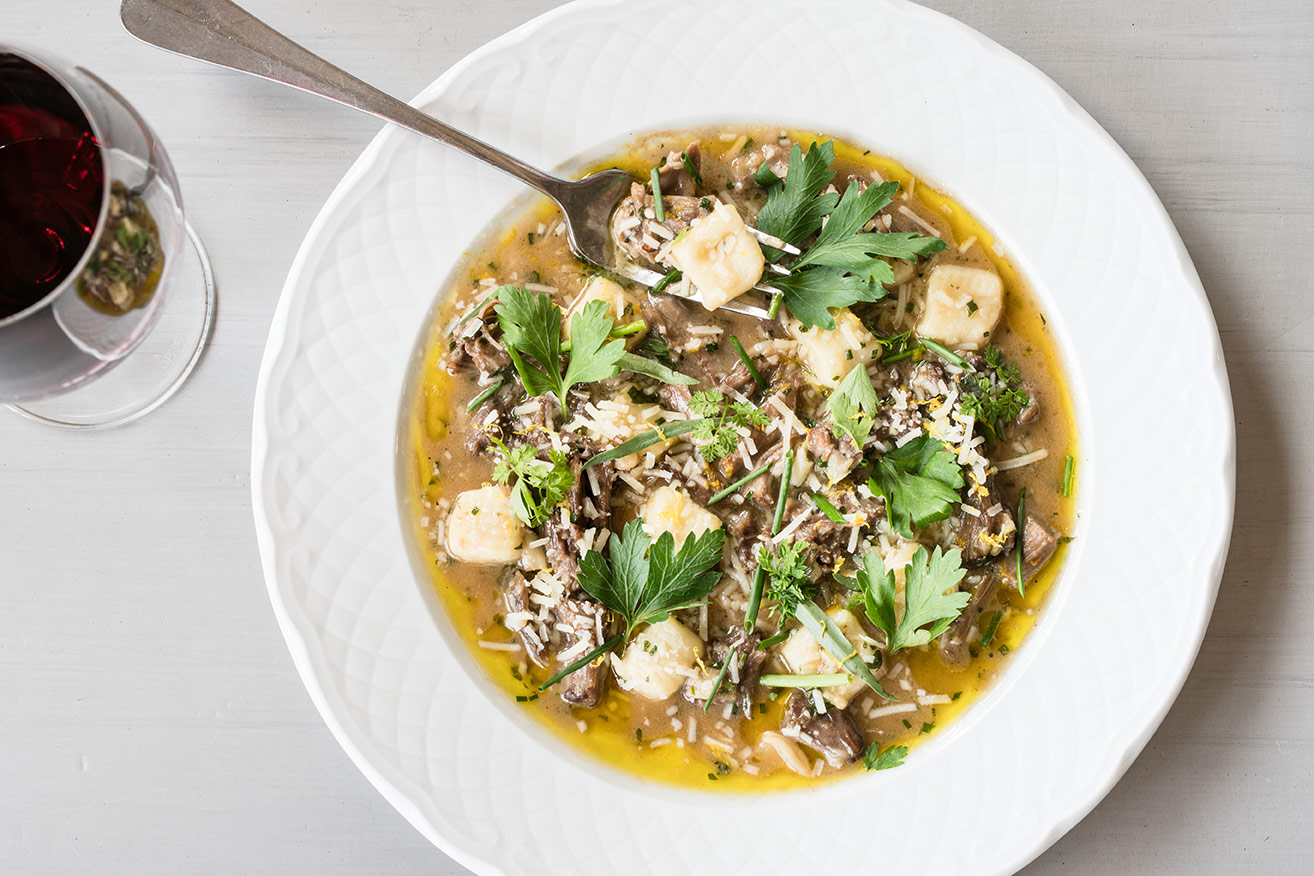 Menu favorites: The menu changes daily, but if the heirloom tomato salad with sun-dried olives, feta, pistachio, capers and basil vinaigrette is on it, Bernard says it’s a must-try. From there, any fish or meat main will be a treat, he promises. 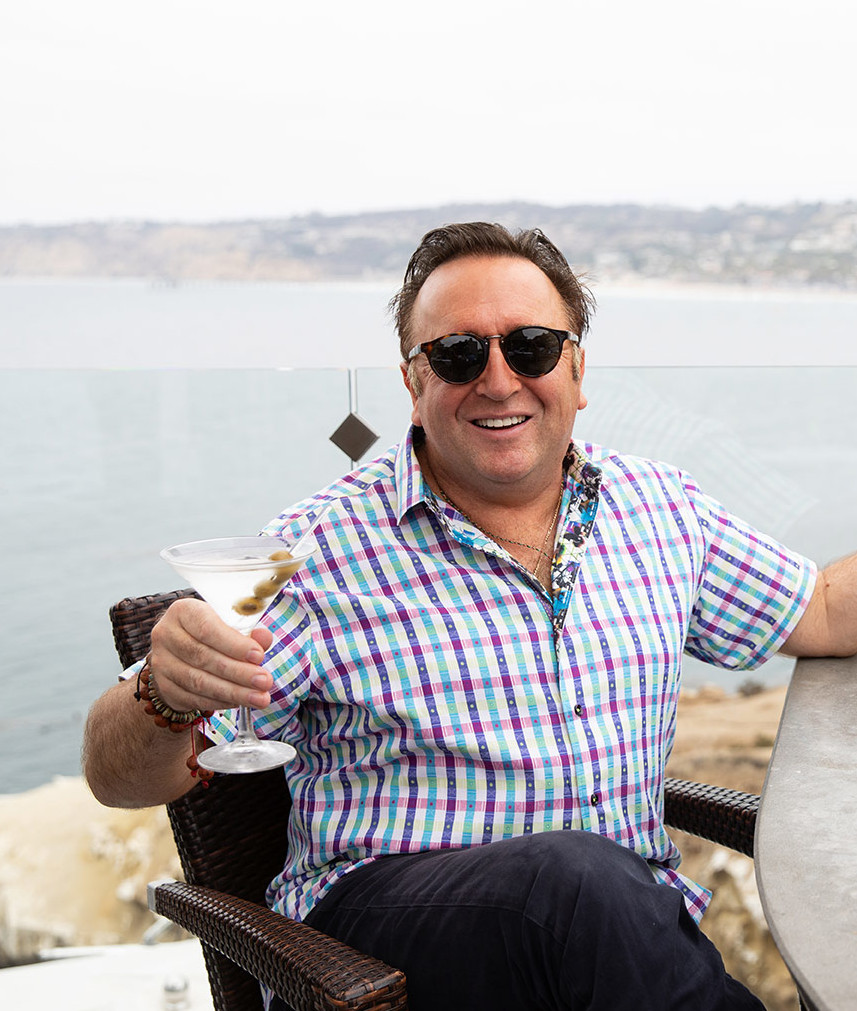 For a drink, the beautiful bar and awesome nighttime view from Eddie V’s Wildfish (which recently changed its name from Eddie V’s Prime Seafood) in La Jolla (there’s also a location near Seaport Village) can’t be beat, especially if you score a seat around the fire pit. 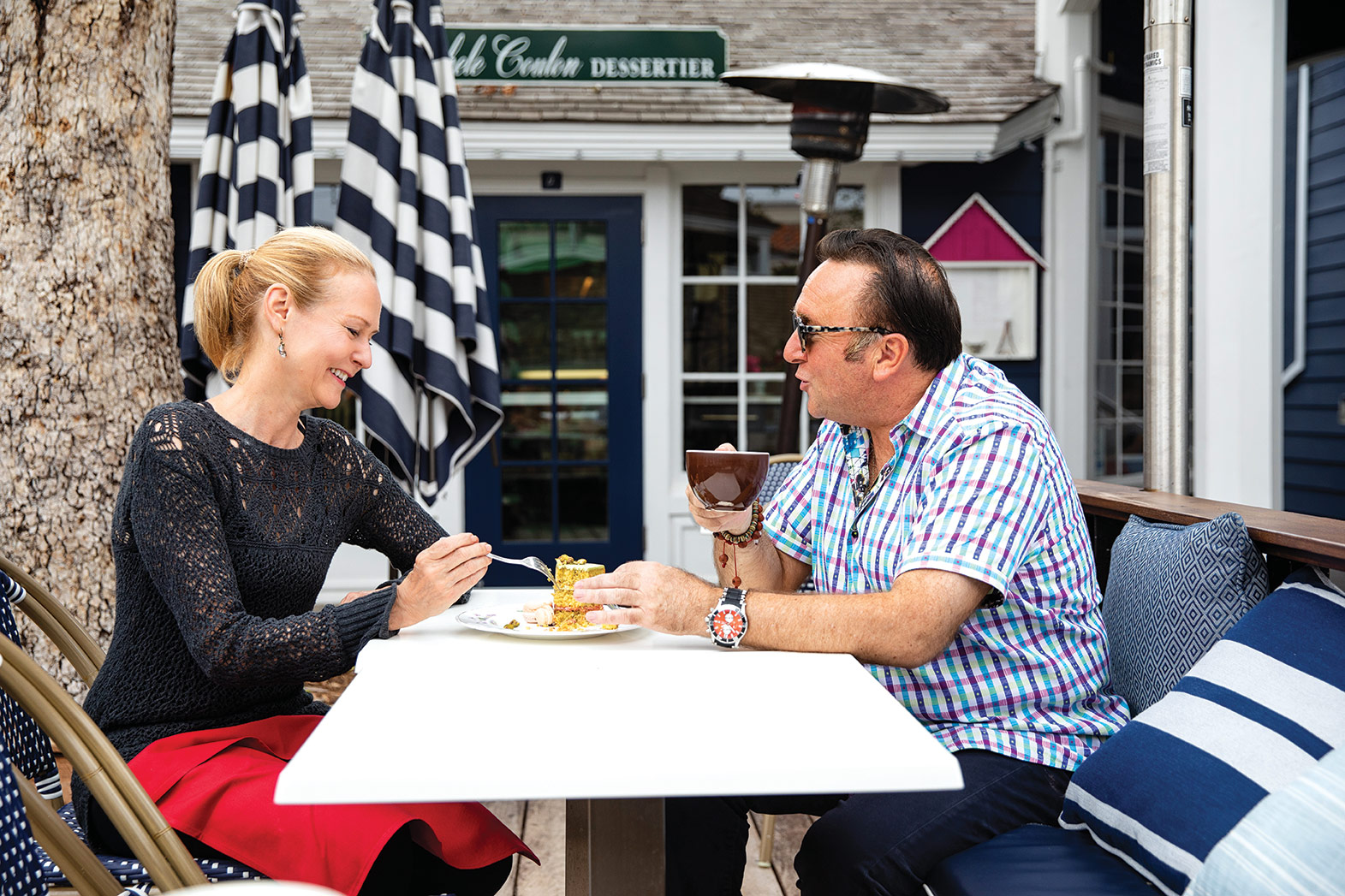 Pastry chef Michele Coulon takes a break from her bakery to enjoy cake and coffee with Bernard.

For something sweet, Michele, the owner and pastry chef behind Michele Coulon Dessertier, an elegant patisserie with a Belgian influence, is a true La Jolla icon and artist, he says. “You can taste her passion and the integrity of the ingredients she uses,” he adds. 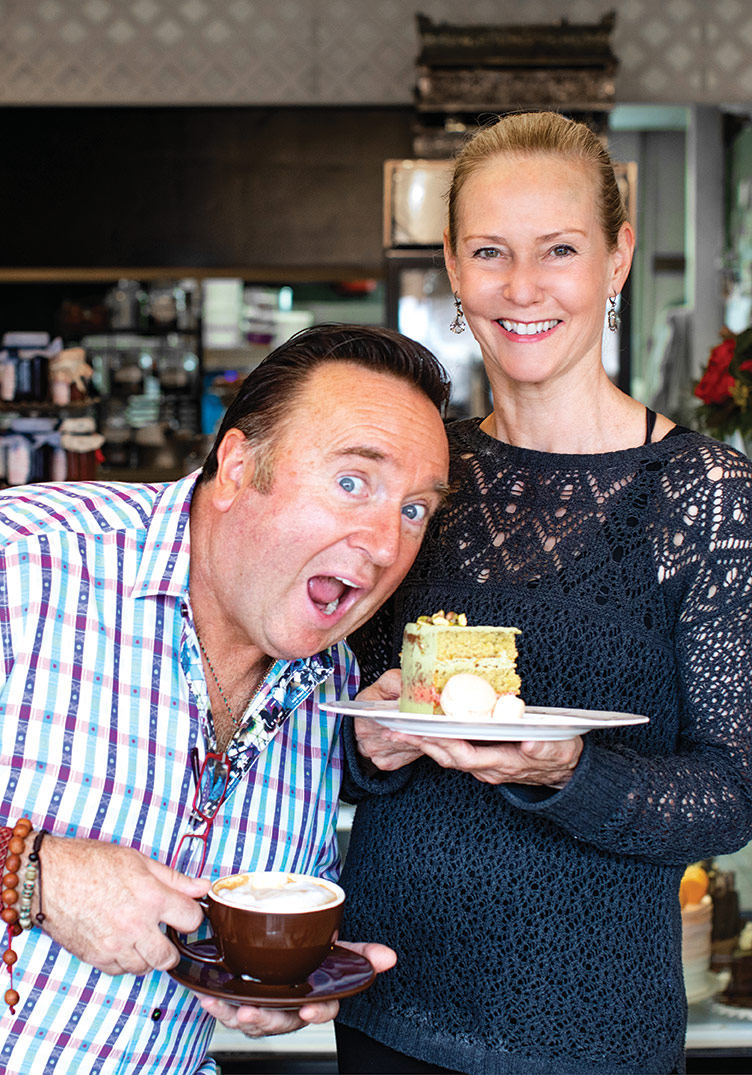 Menu favorites: Michele, who has been in business for 24 years, joins us today for a slice of pistachio cake, a cappuccino, which Bernard says he only orders in the afternoon (other times his coffee is black with only the slightest bit of sugar) and conversation. She prides herself on not loading her cakes and treats with lots of sugar or unnatural additives like food coloring. The green in this deliciously moist confection, for instance, comes partly from organic matcha, a powder made from green tea leaves that she sources from one of her customers.