Finding a balance with propaganda art and rustic, modern and industrial designs

Don’t look for reassuring neutrals in Christopher Burke and Jingjing Sun’s Mission Hills home, embellished with stunning displays of vintage propaganda art. Instead, prepare yourself to be transported into a brave new world of wonder, where gutsy art and adventurous ideas awaken you to weird possibilities. 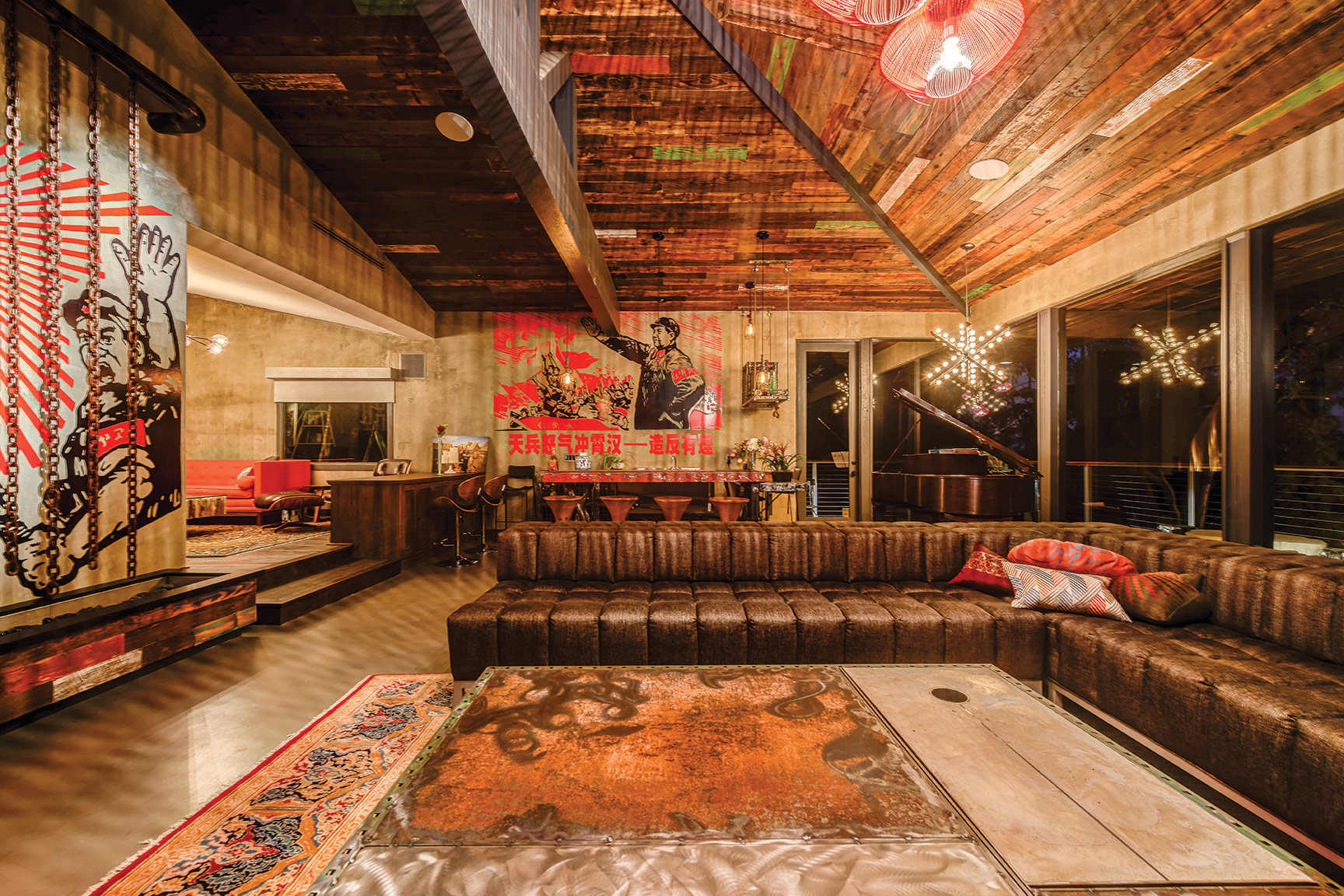 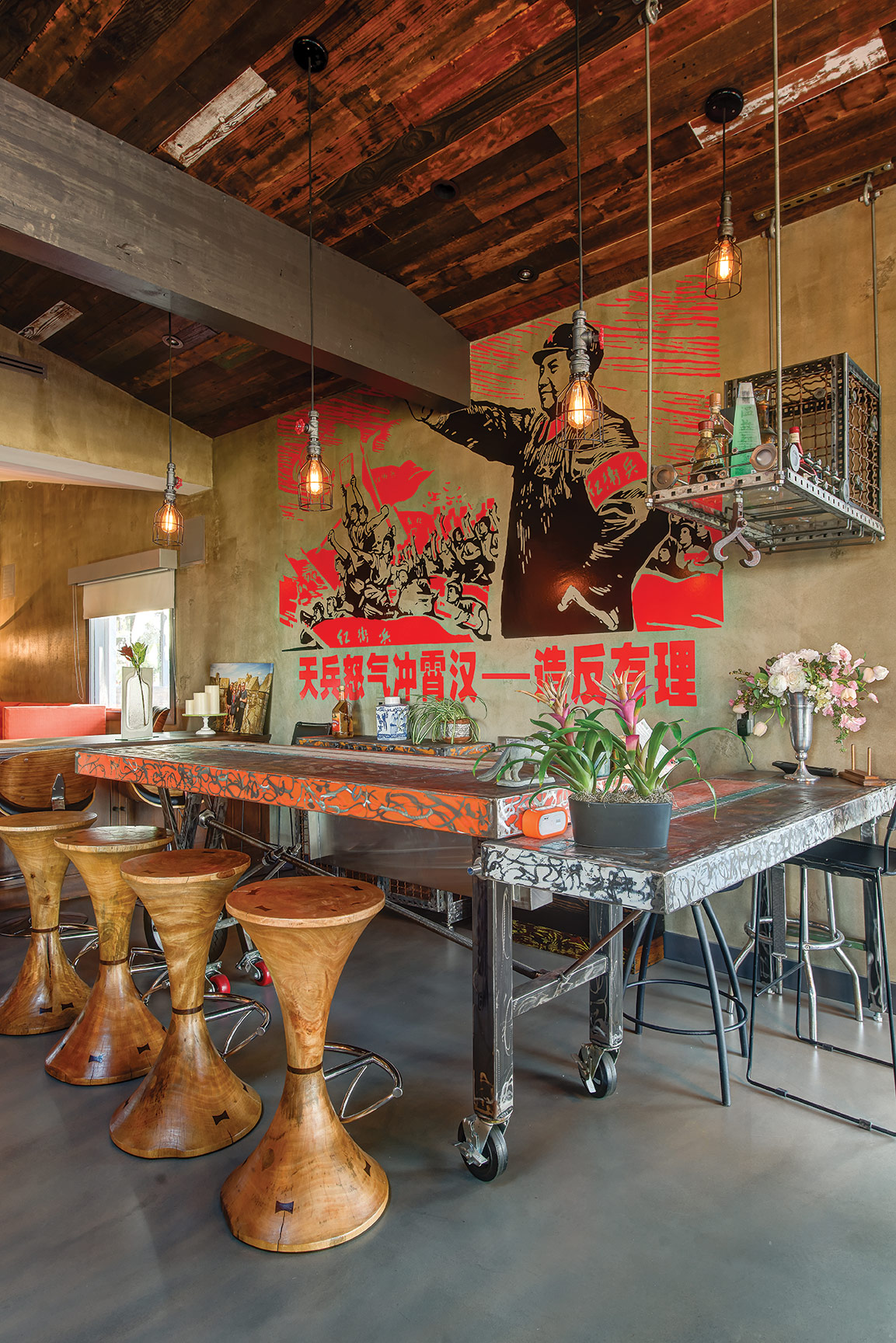 Juxtaposition (or should we say yin and yang) seems to be key here, both in the home and in the personalities of the homeowners. Chris is an introvert—but likes the living room where the family gathers the best. Jing’s an extrovert—but likes the solitude of the master bedroom the best. Go figure. Within the interior spaces, cold concrete dances with warm wood. A midcentury-modern feel (her preference) mingles with a rustic yet industrial look (his taste).

And then, there’s…the freestanding tub—at the foot of the bed. The prison-like chains—hanging in front of 1960s propaganda art. The airplane tires—used on the base of a freewheeling bar. And Chairman Mao smiling down on it all.

“Chris has a PhD in political science and he knows more history than me about China,” says Jing, who grew up in Manchuria, northeast China, and immigrated to the United States when she was 25. “It’s not that he’s adoring Mao. He just collects the art.”

“I’ve always been enthralled with how propaganda art was used,” Chris explains. “For years, it was one of the most effective ways to get the story out, through pictures, to a huge peasantry that were largely illiterate.” 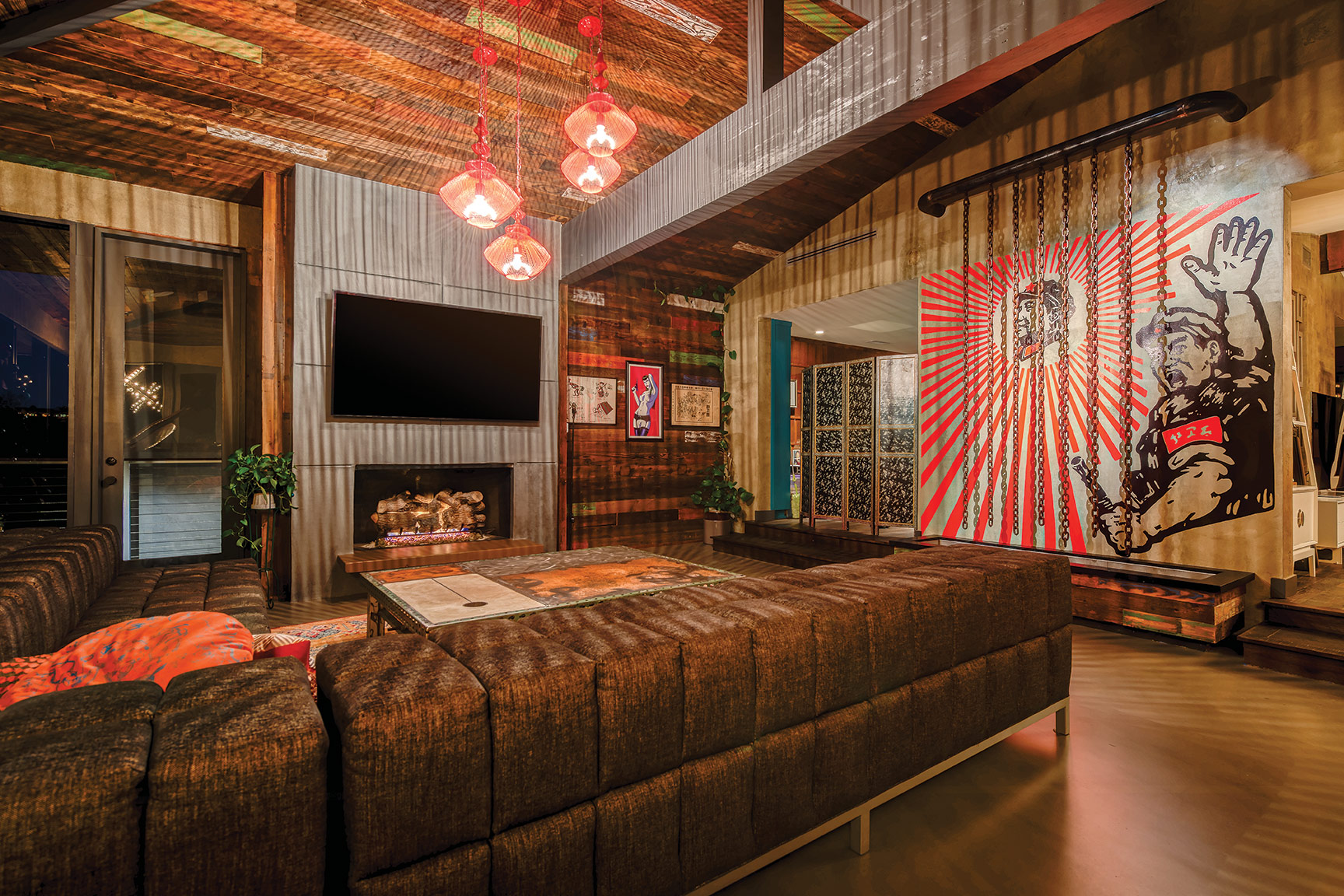 A Quest for Propaganda Art

On visits to Asia, his enthusiasm for the colorful People’s Republic of China and Cultural Revolution posters lead him on a quest to find “the real thing.” Now, the couple have between 50 to 60 of the historical pieces but only a handful are on display. Chris wanted to hang a few of them from the wood beams in the high-ceilinged rustic living room but Jing nixed the idea. “That would have been too much,” she says. “Can you imagine?” Instead, two of the posters were transformed into oversized decals—one at the bar area behind the couch, and another above the trough of a bizarre water feature, which is composed of heavy-weight chains hanging down in front of the decal from a hefty steel bar (and it doesn’t take a PhD in political science to come up with a psychological interpretation for that idea). Chris certainly understands why Jing doesn’t want Communist-party proselytizing posters swinging from the rafters. “I collect them,” he says. “Jing just puts up with them.”

Perhaps the previous owners of this 1928 canyon aerie, Bruce and Mary Hazard (he of Hazard Construction fame), would not have been as tolerant of the wall art despite its historical merit. But they may have been pleased that Chris and Jing kept the gated brick-walled drive leading to the secluded site, an area that’s enveloped by 20 acres of dedicated open canyon space, overlooking the Mission Valley golf course and beyond. They also kept the basic footprint and an original copper fireplace in a cozy seating area by the kitchen, just to the right of the entrance. 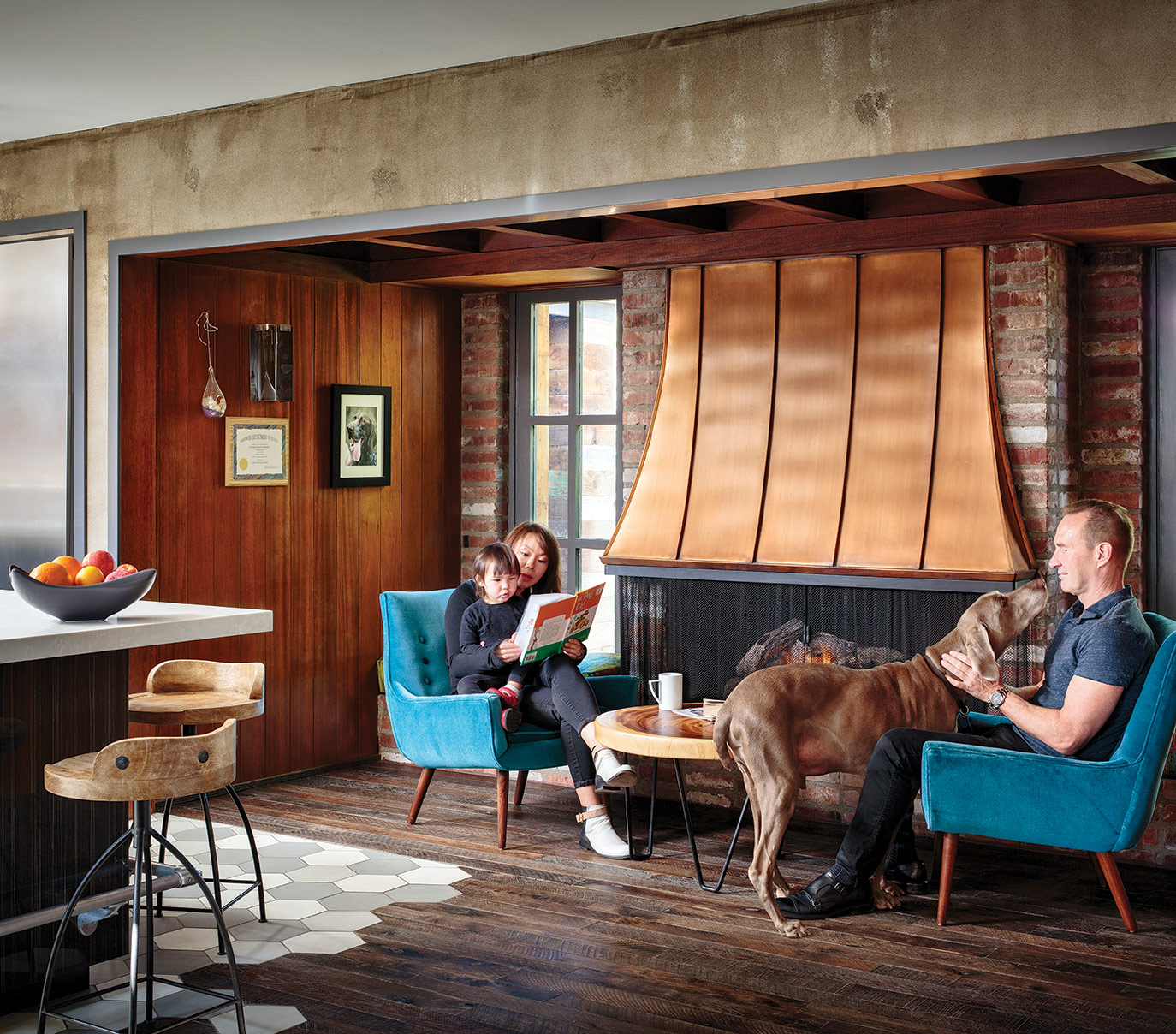 Jing brings Dr. Seuss characters to life for daughter Waylin as the family Weimaraner leans in to give Chris a wet kiss in the cozy sitting room off the kitchen. The space retains its original paneling, brick walls and copper mantel. (Photo: Chipper Hatter)

“Because it’s an interesting property, once owned by the Hazards, who built Mission Valley, we wanted to retain a lot of the house,” Chris says. “We didn’t want it to be knocked down, but additions were made in the late ’40s, the ’50s, the late ’60s and ’70s, so it ended up being a real hodgepodge.”

In their search for someone creative to help them in the estate’s makeover, their contractor turned them onto Davis Ink—a company with a knack for inventive differentness in design. 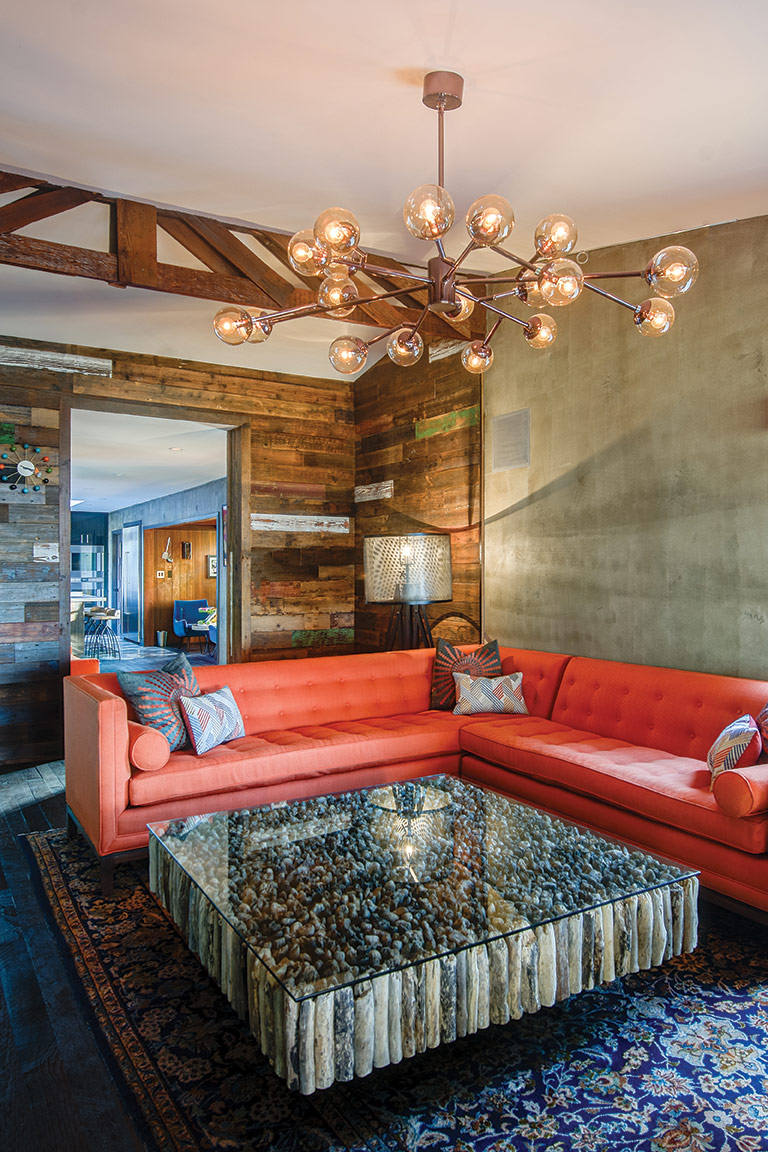 “At the start, they may have been skeptical because we are nightclub and restaurant designers,” says Davis Krumins, co-owner, with his wife Andrea, of Davis Ink. “We don’t normally take residential projects, but they were kick-ass cool people and the house was an insanely cool house that had the feel of Frank Lloyd Wright’s Falling Water project. It wasn’t in good shape but the original design was incredible, so it was a matter of making the beauty of the existing building pop out again.”

Walls and framing were so deteriorated that everything had to be resurfaced and refaced. “We wanted to reinvent modernism with a lot of the raw elements of the building, old found things and a touch of the rustic—a combination of very refined and very rough,” Davis says.

The sensual mixture makes its appearance throughout the house in cohabitating wood and cement walls and in rustic wood flooring; in the dining room with its stainless-steel, triple-doored wine cooler, industrial-steel topped table and rustic sliding barn door; in the master bedroom with its midcentury-modern tiled fireplace and a Davis Ink custom wood headboard made of varied-length beams that travel up the wall in a journey to the ceiling above the bed; and in the sleek kitchen where a light fixture designed with thick, braided rope hangs above a floating center island. But nowhere does it express itself more fully than in the blowout, now-sunken living room where the suspended drop ceiling was removed to expose the upper structure and celebrate the original wood beams that now live with Davis Ink’s extraordinary water feature, communist propaganda, Kray Sudderth’s over-the-top modern illustrations and Hugo Heredia’s glass-and-steel sculptural art coffee table and abstract bar. 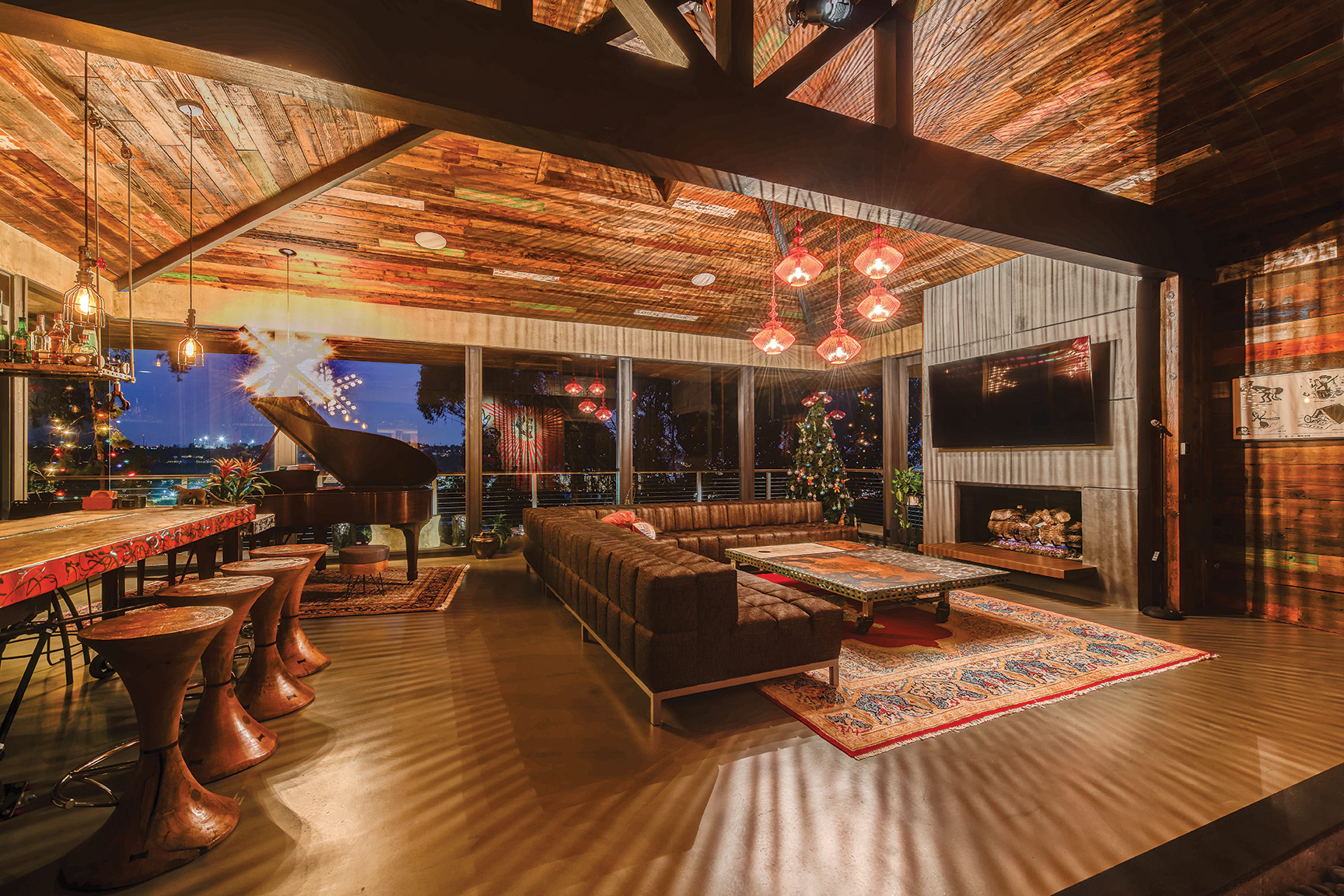 “Jing let me have the great room,” Chris says. “Within reason, it has everything you could want. You don’t get bored in that room. When it’s party time, the couch becomes more than just a piece of furniture, someone is playing the piano and, oddly enough, there is a general feeling of bonhomie even though you’ve got Mao in there.” (Photo: Alen Lin Inc Photography)

“Because they like to collect art and furniture and lighting pieces, our design was to make it feel like an art gallery,” Davis says. “Not a sterile gallery, but warm and earthy, a place with a comforting, welcoming sort of personal feel. We used a lot of reclaimed old wood planks—random boards, with some lighter and some darker, some different colors of wood and some arbitrary pieces that we brushed paint on and off again for a light wash. It was a fun thing and it’s almost like a pop-art element.” 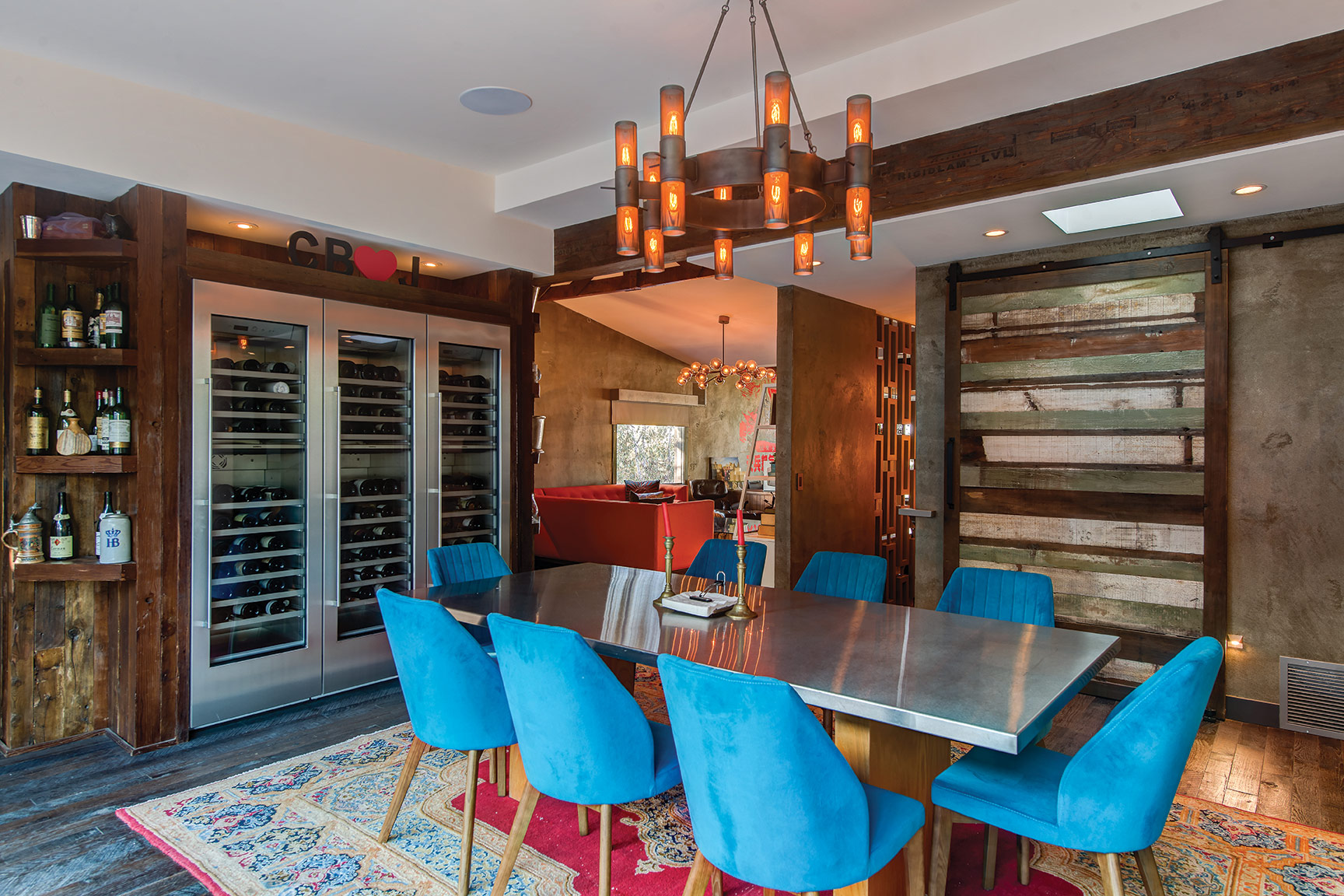 Davis found placements for Chris’ collection of Persian rugs, including the dining room and sitting room. “They meant a lot to him and added a personal touch to the design,” Davis says. Chris didn’t purchase the CB Loves J letters above the wine cooler. “I put them there to remind him,” his wife Jing says. (Photo: Alen Lin Inc Photography)

Space for Parties, Space for Family

Here and there, walls were eliminated and far-reaching glass accordion doors installed to open up the previous warren of rooms to views, decks and patios.

“We told Davis that we like to entertain and that we have to have room for parties,” Chris says. “The whole upper floor has an open floor plan now, for in-and-out flow. Nano doors open to the courtyard where the grill is and to the deck on the other side. There are also living quarters downstairs because, for those who don’t know, when you marry a Chinese woman, you marry not just her but her family too. So downstairs, auntie, uncle, cousins, mom and dad—the whole shebang—have their own thing, with their own entrance. Upstairs it’s us, our nanny and our 2-year-old.” 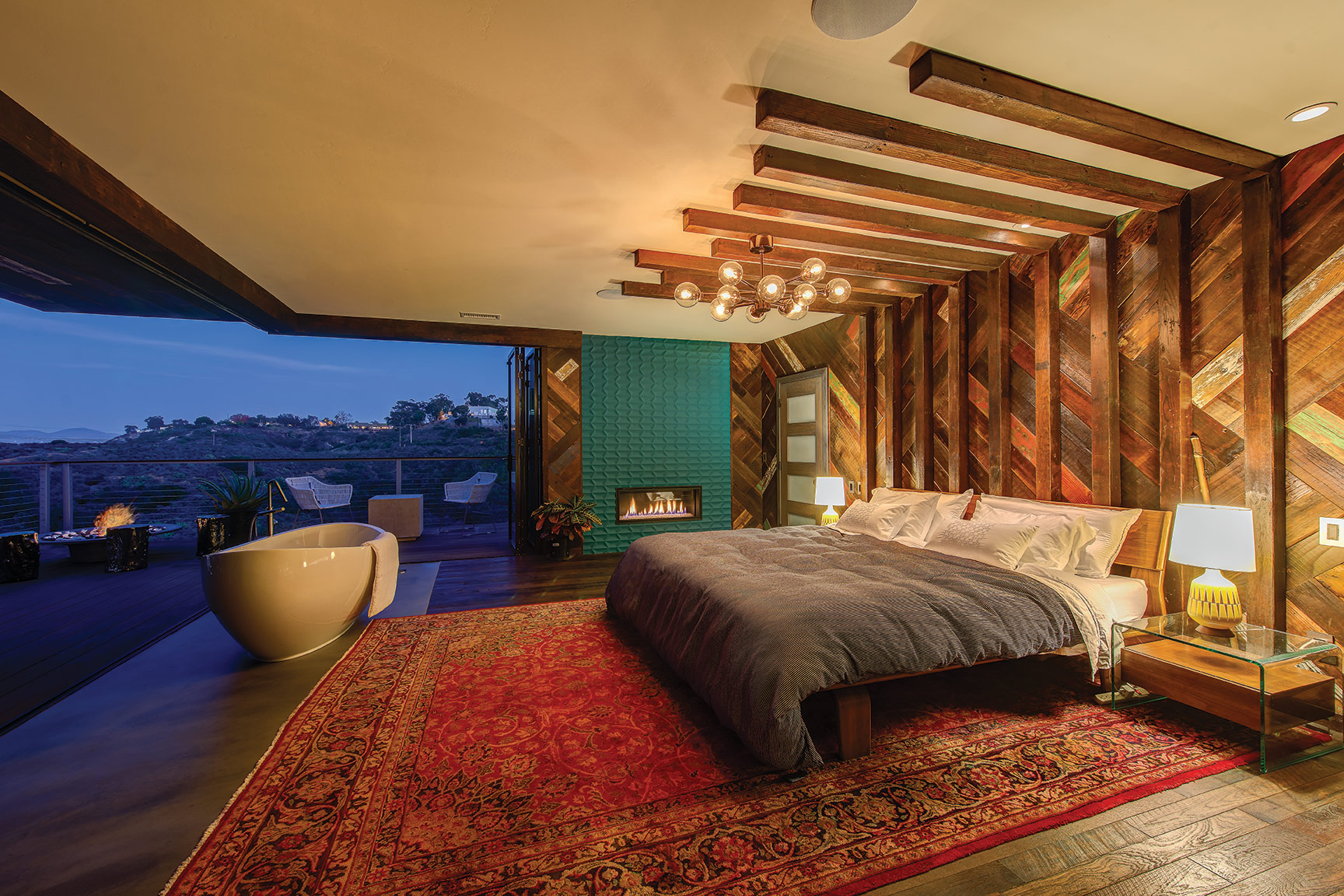 Left and above: Soaking in the master bedroom’s tub when the folding glass doors are open feels like floating above the world on an indoor-outdoor deck that cantilevers over the valley. “Even though you can look out at the scenery, it is very private,” Davis says. “No one can see in.” (Photo: Alen Lin Inc Photography)

But everyone comes together during the holidays. “Last year we had 30 to 40 people over for the holidays and Chinese New Year,” Chris says. “Jing and her auntie set up the kitchen and taught the neighbor kids how to make dumplings. It went on for hours. We try to deal with the holidays like Korean Air does—the Western menu and the Eastern menu,” he jokes.

Hmmm, kind of like the way they dealt with the home’s design: an exciting menu of venturesome contrasts. 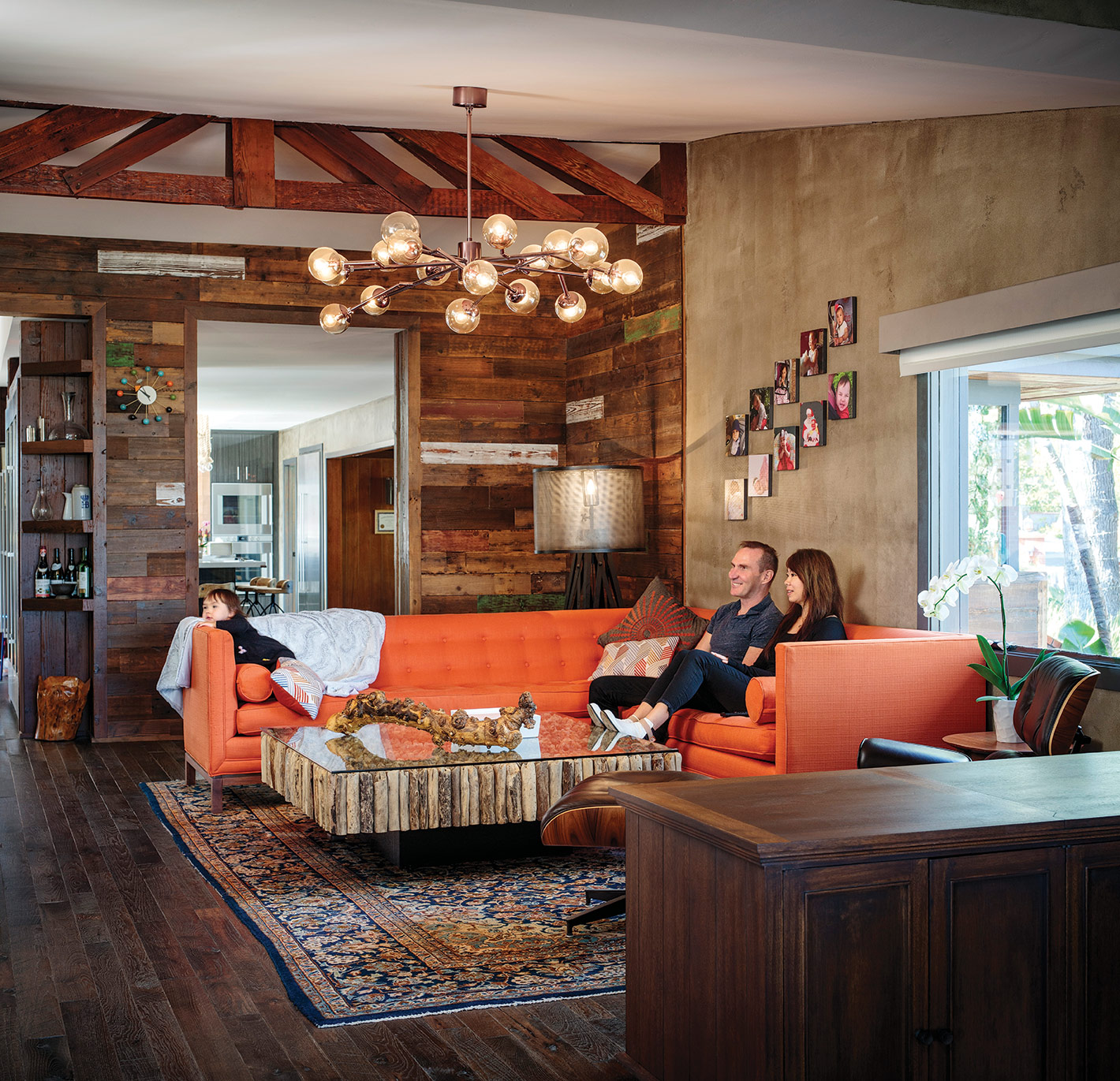 The family gets together for a favorite TV show in the sitting room off the bar. (Photo: Chipper Hatter)

If you lean toward contemporary or midcentury-modern design and the person that shares your home adores rustic or industrial design, there is a solution: mix and match. Here’s how:

Choose one style to play the main role while the other style plays a supporting role. In Chris and Jing’s home, rustic leads the way in almost every space except in the kitchen where sleek rules.

Find something in the opposing styles that they share in common, such as color or shape. In Chris and Jing’s home, gray, red and brown are the main shared colors; squares and rectangles are the shared shapes. Grouping items with similar elements works particularly well in accessory displays.

Achieve harmony with an even distribution of weight and attain balance with repetition. In Chris and Jing’s living room, for example, the heft of the fireplace is equal to the heft of the wall art and the couch is no slouch either. Red makes seemingly fleeting appearances in art, lighting fixtures, throw pillows and the rug. Gray appears steadily in walls, floors and furnishings.

Pick one item to be the main event. Chris and Jing seem to have several “wow” moments but let’s face it, the showstopper in the living room is the wall art, in the kitchen it’s the flooring, in the nook it’s the copper fireplace and in the master bedroom it’s the oddness of the tub placement.