Where the Chefs Eat: Deborah Scott

We tagged along with chef Deborah Scott to see where one of the biggest names in San Diego restaurants and food dines. Deborah Scott, or Deb as she introduces herself, is one of the restaurant pioneers in this fine city. A native of Virginia Beach, she landed in California in 1992, and introduced Indigo Grill in Little Italy two years later. Since then, she’s become the executive chef and partner in the Cohn Restaurant Group and opened a portfolio of successful eateries, most recently Coasterra on Harbor Island. Tour the city meal-by-meal with her! 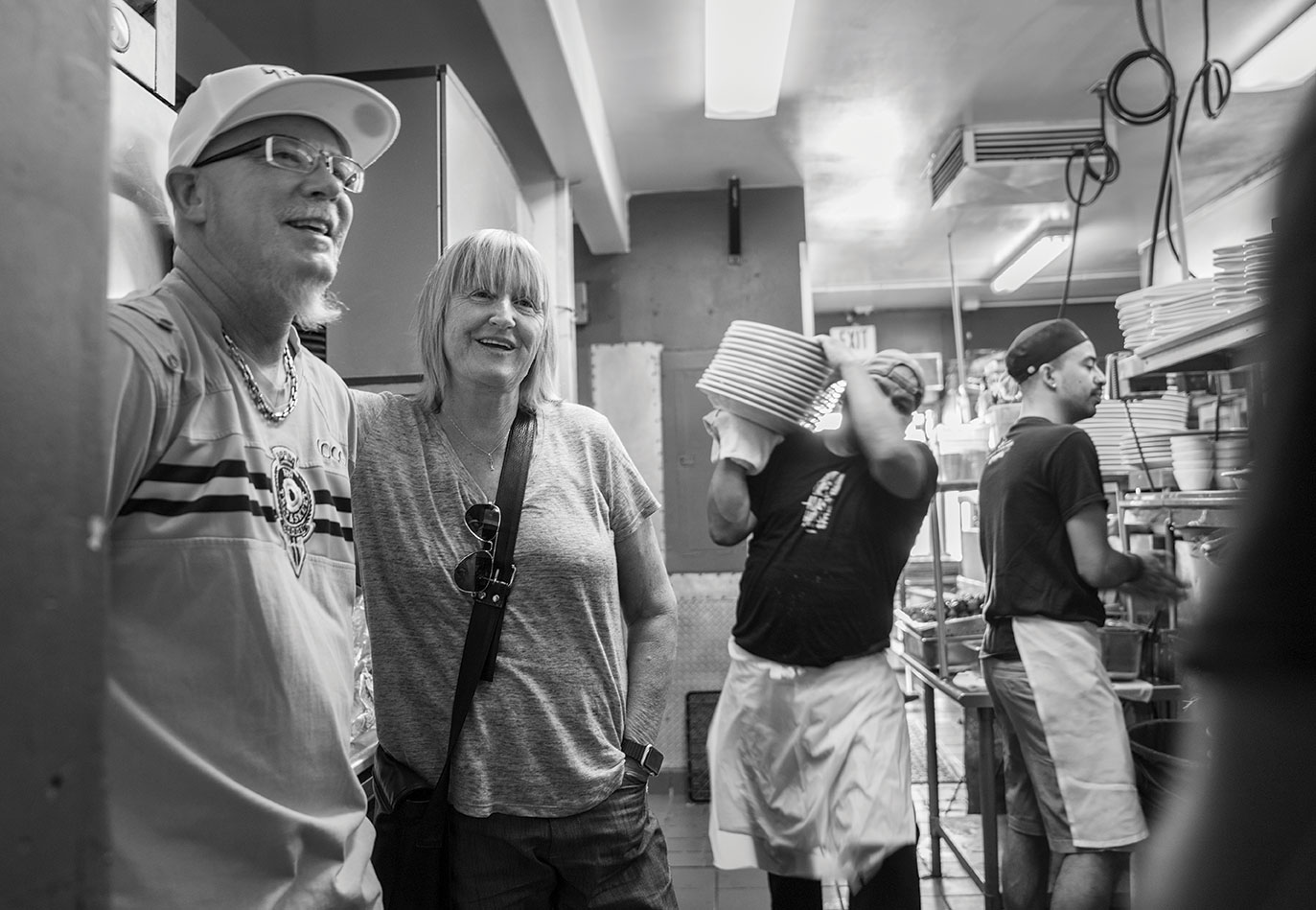 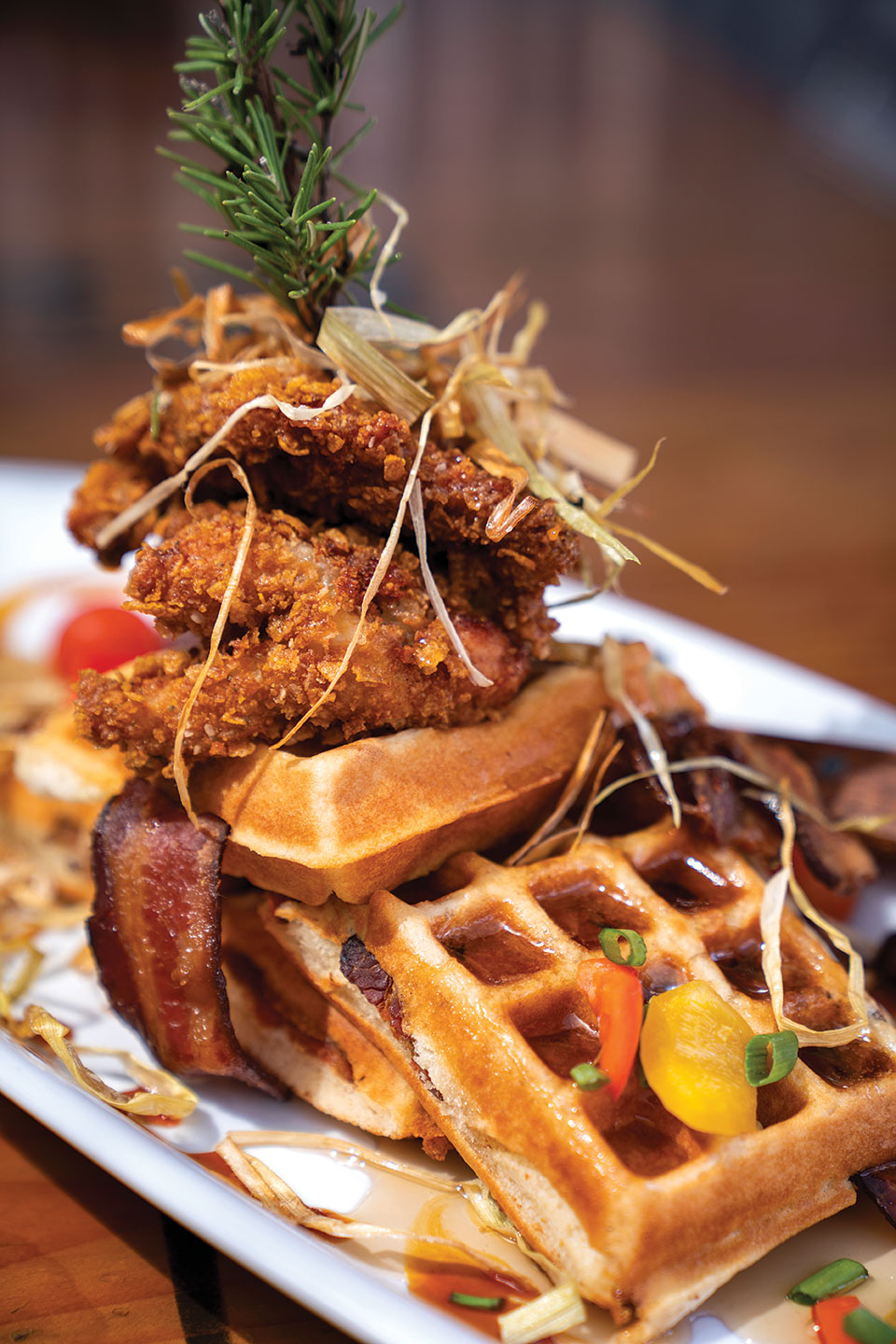 For breakfast, she meets me at the original Hash House a Go Go in Hillcrest. Deb’s been friends with executive chef and co-founder Andy Beardslee for more than 25 years. And on this Wednesday, his day off, he met us at the restaurant because he doesn’t let an opportunity to cook for longtime friend Deb pass.

She sends anyone looking for the best breakfast in town here, and she loves sitting on the back patio. 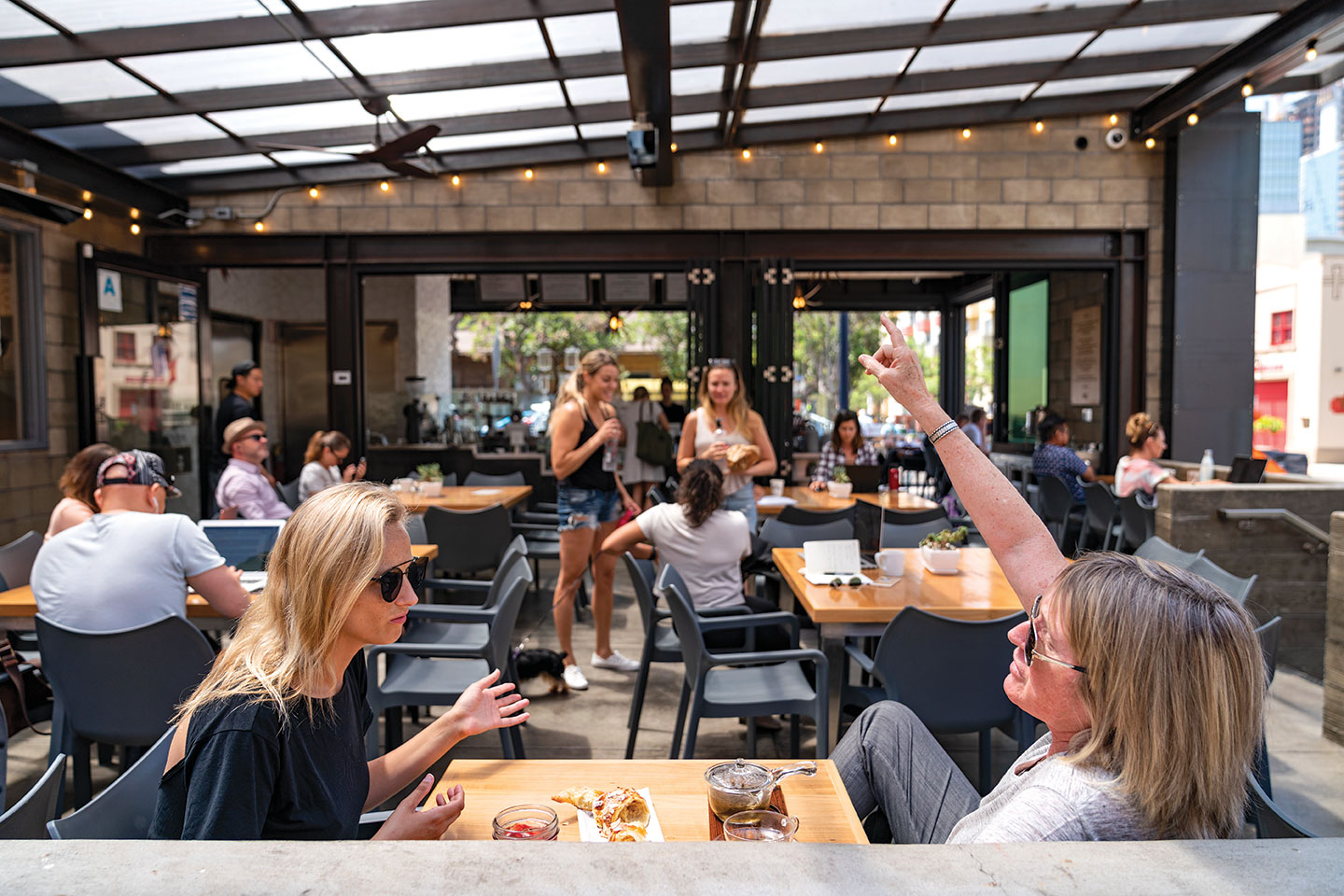 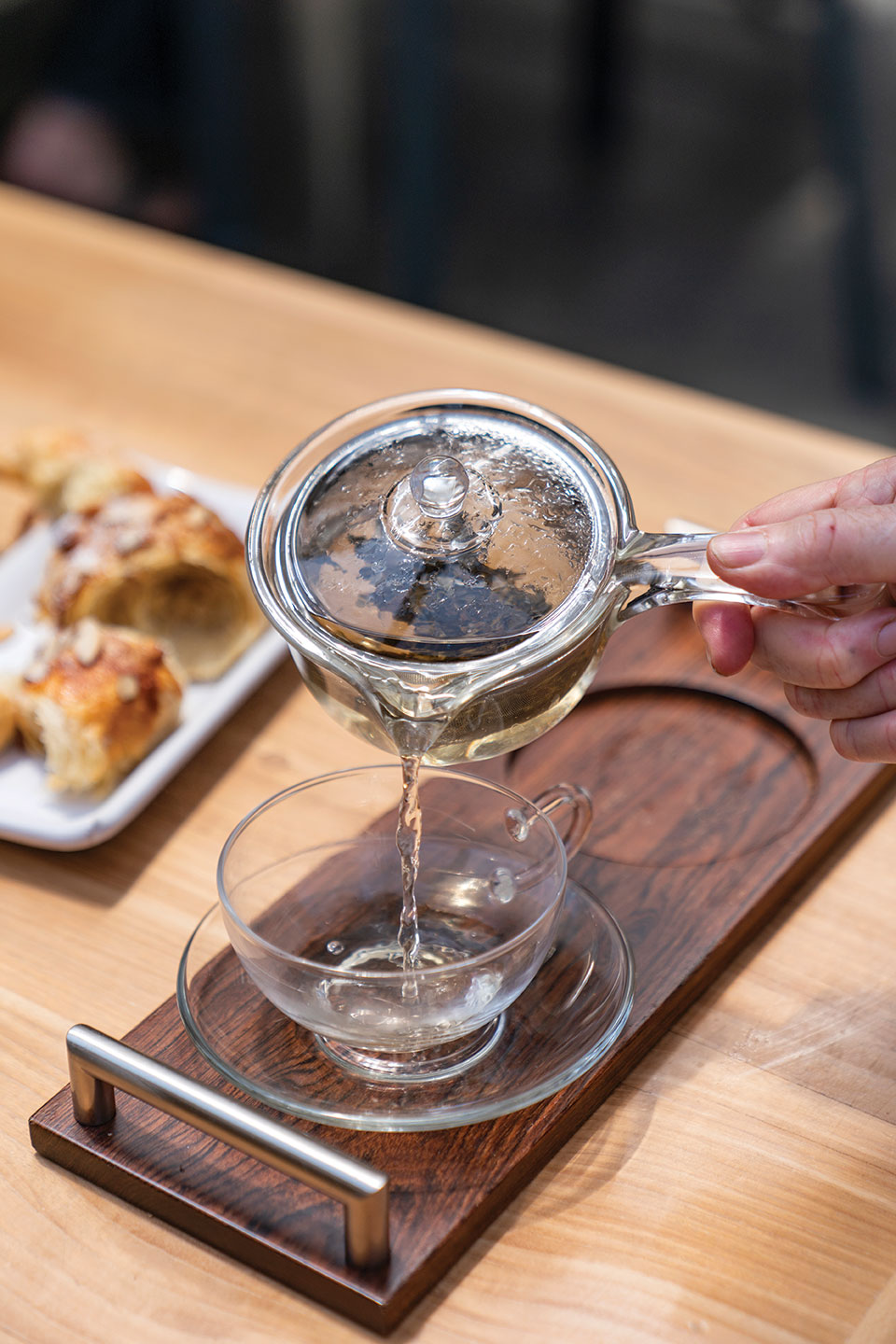 For coffee, Deb stops in at Lofty Coffee in Little Italy (there are two other locations in Encinitas and Solana Beach) when she’s at her Indigo Grill restaurant located cattycorner from the open-air cafe. “I love the vibe and design here,” she says. She’s a fan of details—the textured white walls, folding doors that open all the way up, even the logo.

Menu favorites If she’s getting coffee, she orders the Morning Dove house coffee and drinks it black. “I like to be able to taste the true coffee,” she explains. “As soon as you add hazelnut or mocha, you lose the taste of the coffee.” When she opts for tea, she has a few go-tos: Dragon Pearl Jasmine Superior green tea, the hibiscus lemongrass tea on ice or the blood orange rooibos, which is what she drinks this morning. “I just love the presentation of this,” she says.

And though she’s not hungry after breakfast, she gets one of the handcrafted almond croissants. “It’s not too heavy or buttery,” she says, cutting it into bite sizes and passing it around for everyone to try. 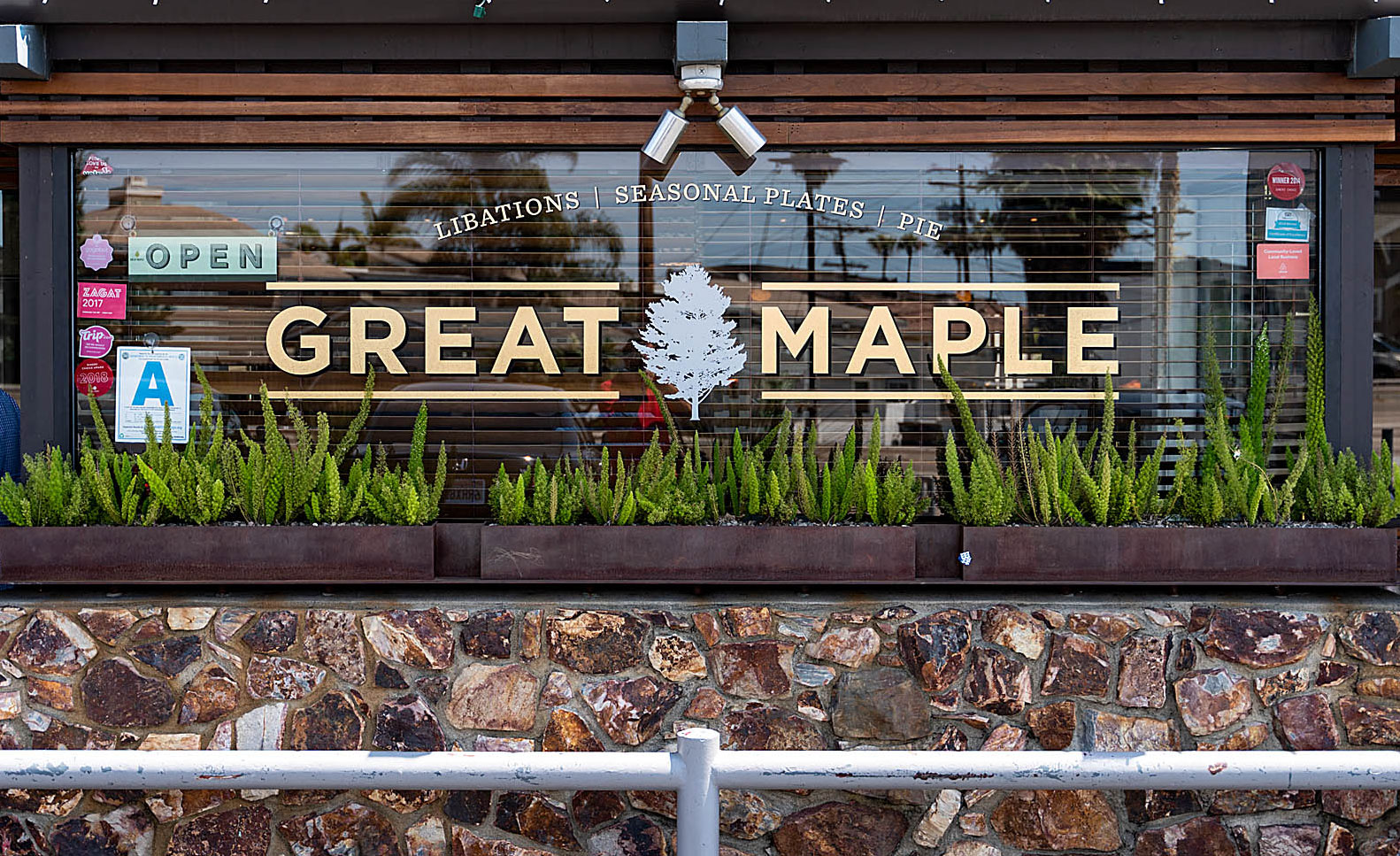 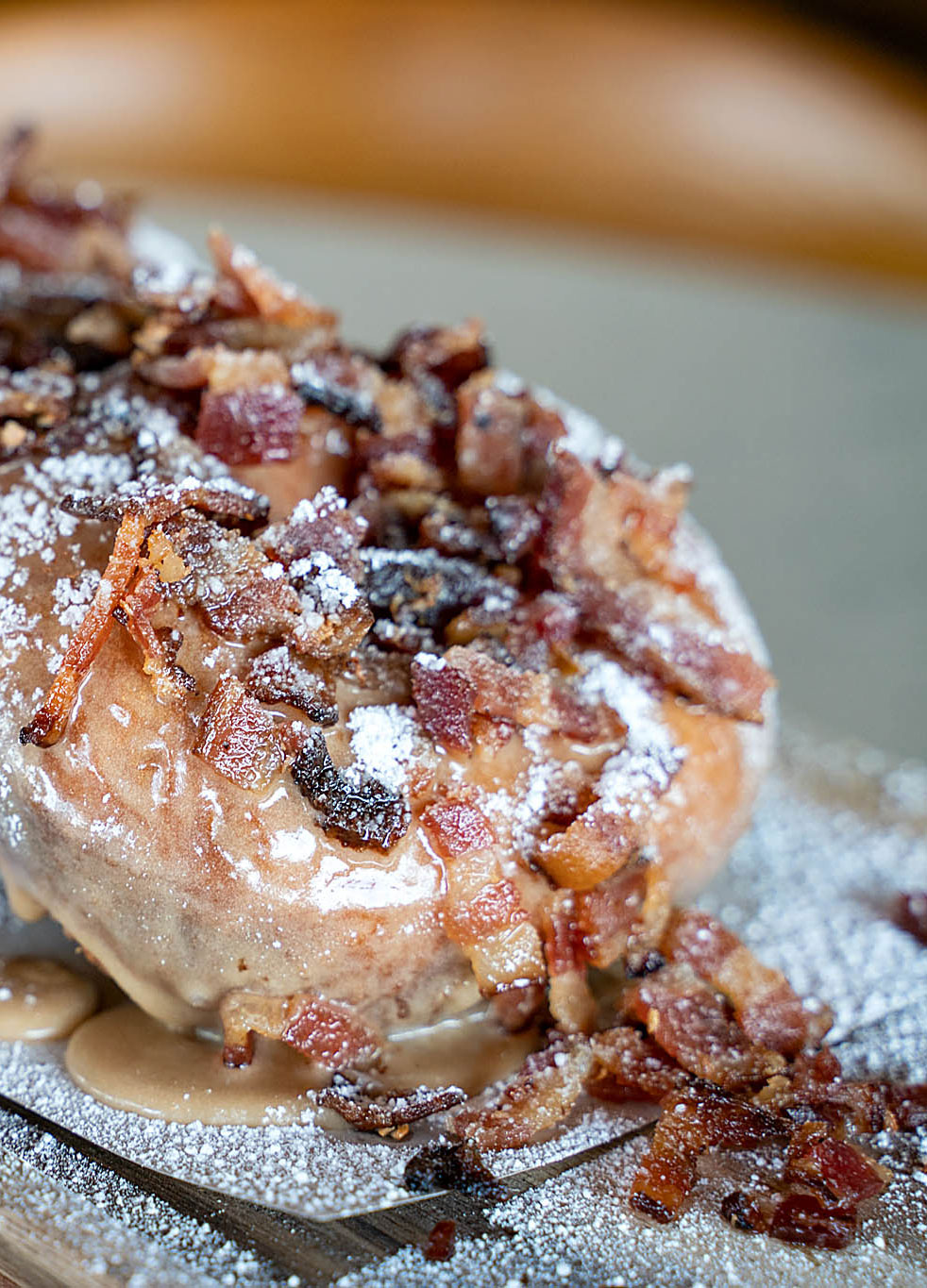 For brunch, Deb visits Great Maple, one of Johnny Rivera’s (he’s the other co-founder of Hash House) acclaimed restaurants. Johnny’s the man behind the midcentury-modern design with what he calls a “European dinette” feel.

Menu favorites She recommends the Portobello mushroom fries and brown bag mini popovers, which are shaken tableside, dusted with parmesan and served with honey butter, for starters. Kelly Stilwell, executive baker at Great Maple, used to work for Deb. “She’s got such a cool rendition on the popover,” Deb says.

For the main dish, she loves the California fresh kale-and-quinoa salad served with chicken, toasted pine nuts, tomatoes and a shallot vinaigrette, or the turkey burger with melted brie and arugula. 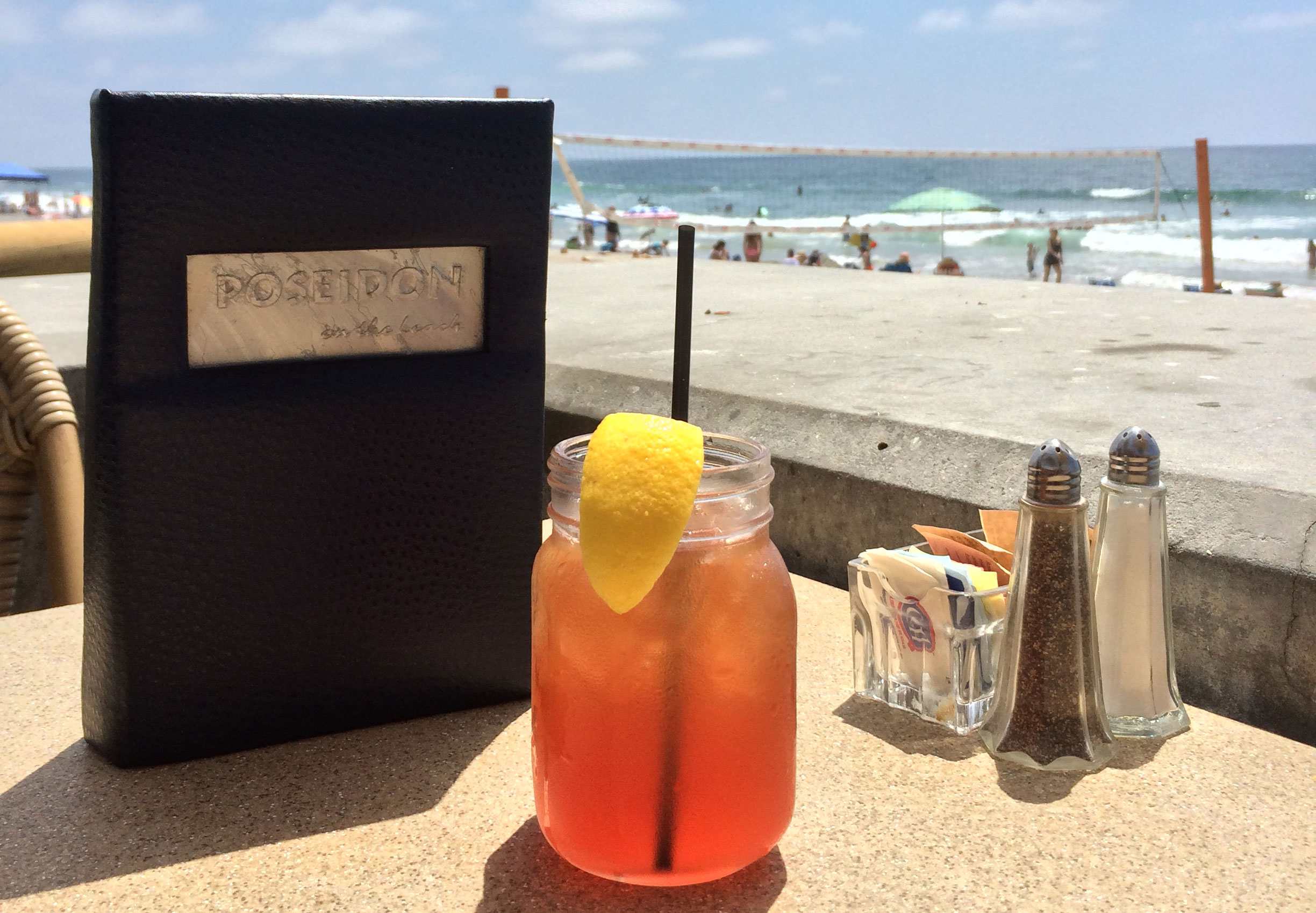 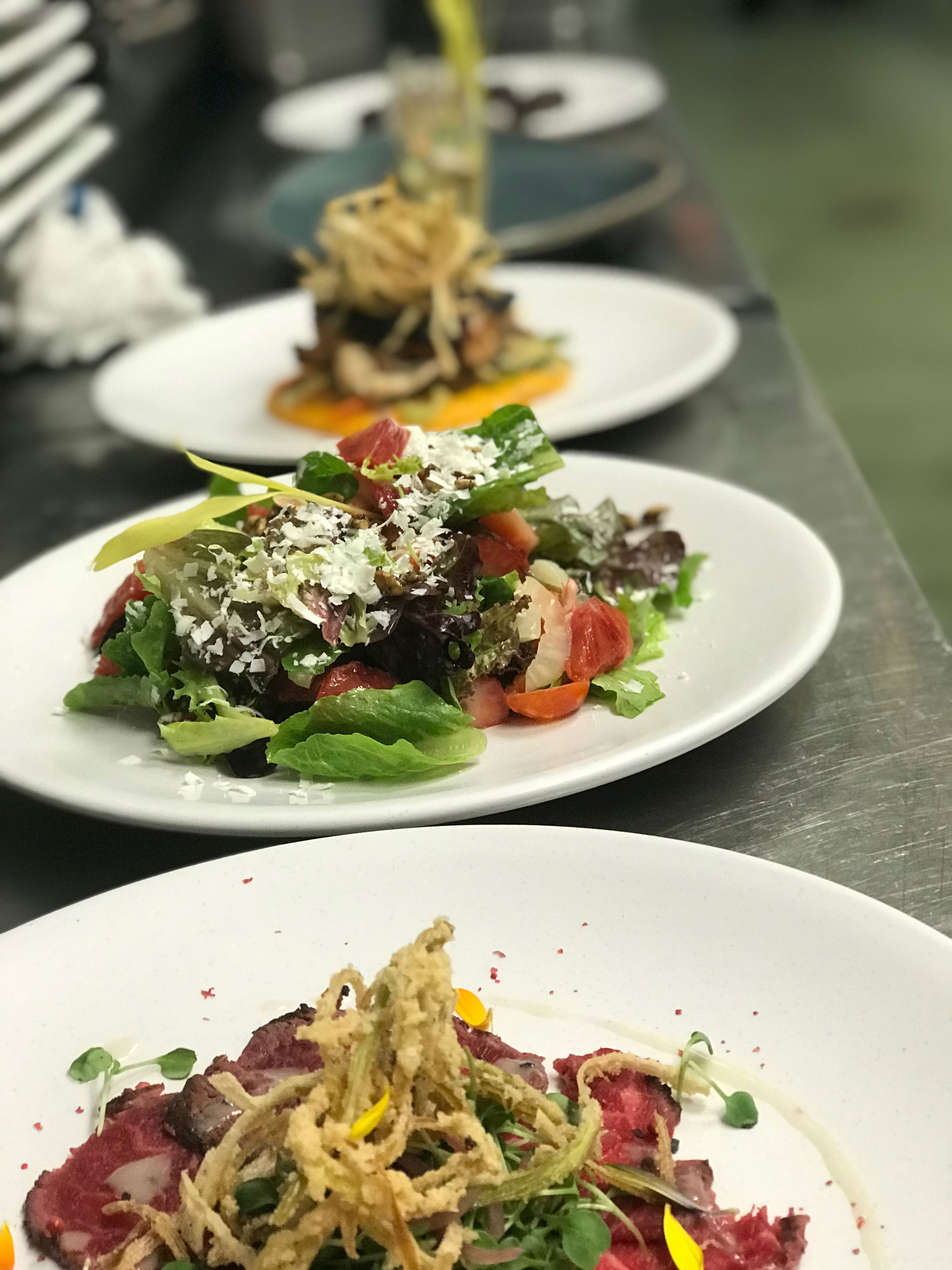 For lunch, Poseidon is where she’ll be. The good seafood she gets right on the water at Poseidon reminds her a lot of home. “I grew up in Virginia Beach and on the outer banks of North Carolina,” she says. “I’m a coastal person.” She fondly remembers crabbing and clamming, then cooking it all on the beach before spending the night camping under the stars.

Dinner and a Drink: Kettner Exchange

For dinner and a drink, she asks friends to meet her at hotspot Kettner Exchange, lauded for its rooftop bar and cabanas and progressive cuisine.

Menu favorites Truth be told, she’s not there for the booze, though she says they have an impressive craft cocktail program. “Oh my god, I’m addicted to the kale salad,” she says of the small plate made with apple, almonds, golden raisins, Parmesan and lemon olive oil. “I won’t emulate it because it’s too good not to go there just for that. It’s amazing.” 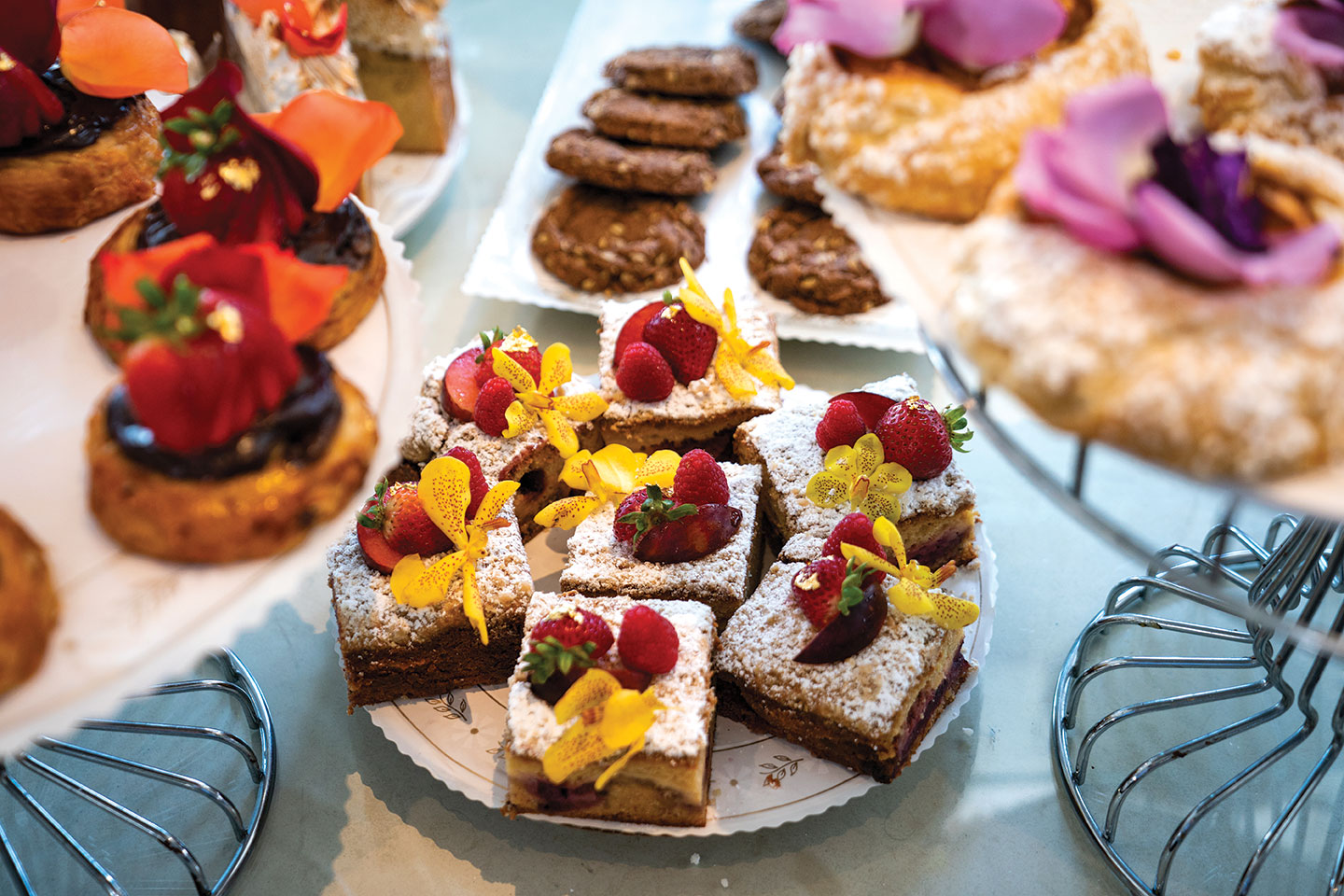 Deborah Scott appreciates a beautiful display case at Extraordinary Desserts. “The combination of flowers and fruits on these bars is just so pretty.” 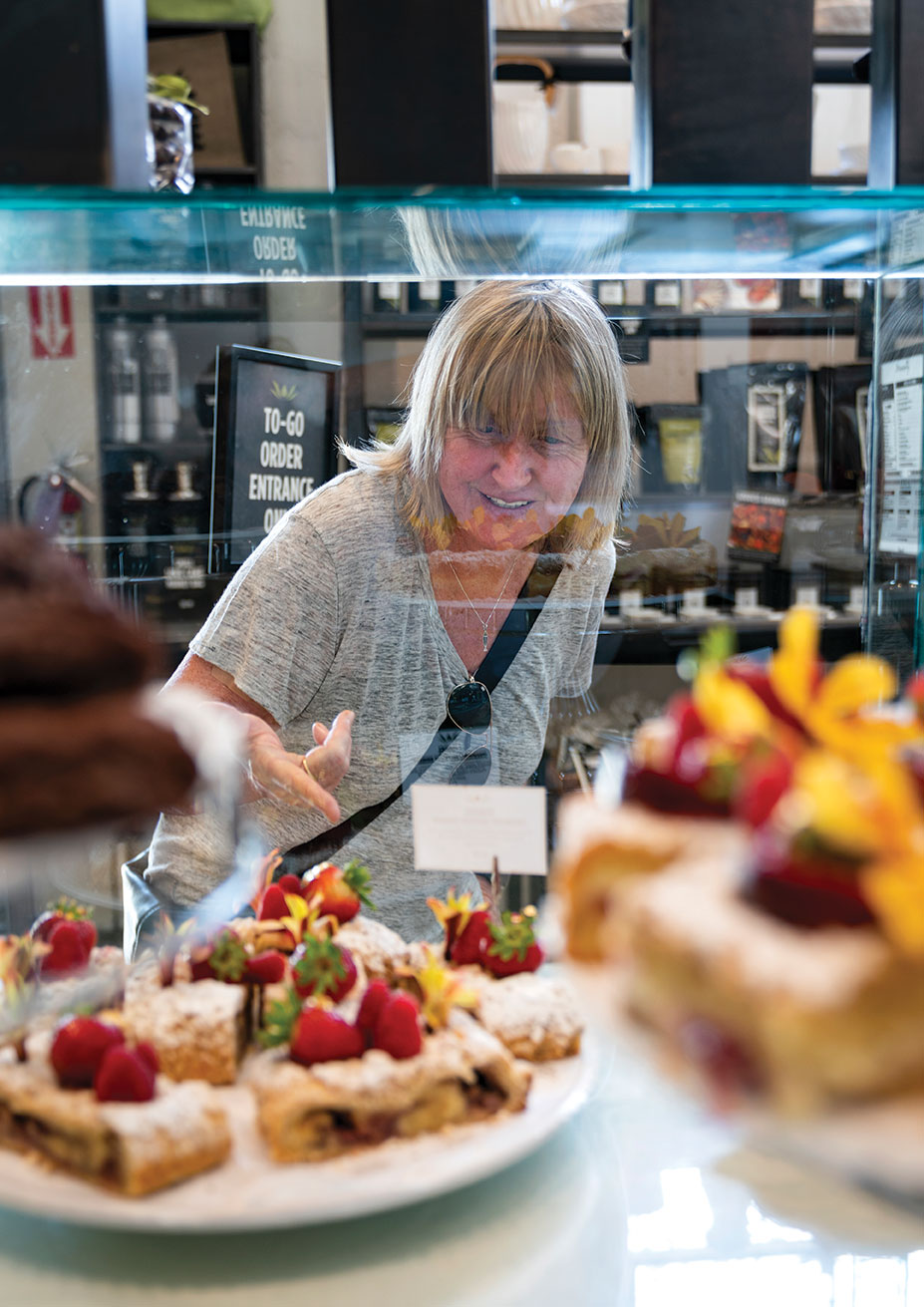 For something sweet, she peruses the eye-catching cases at sweets palace Extraordinary Desserts, which is opening another location in Bankers Hill sometime this fall.

Menu favorites Deb’s sweet tooth craves roasted pecan shortbread or the chewy and sweet coconut vanilla cocoada. But she comments on the beauty of chocolate-chip cookies so full of chocolate, “there’s almost not enough dough to hold them in (a good thing),” and often picks up a banana cream or coconut cream pie if she’s hosting.