Healing Body and Mind in a Food Forest Sanctuary Garden 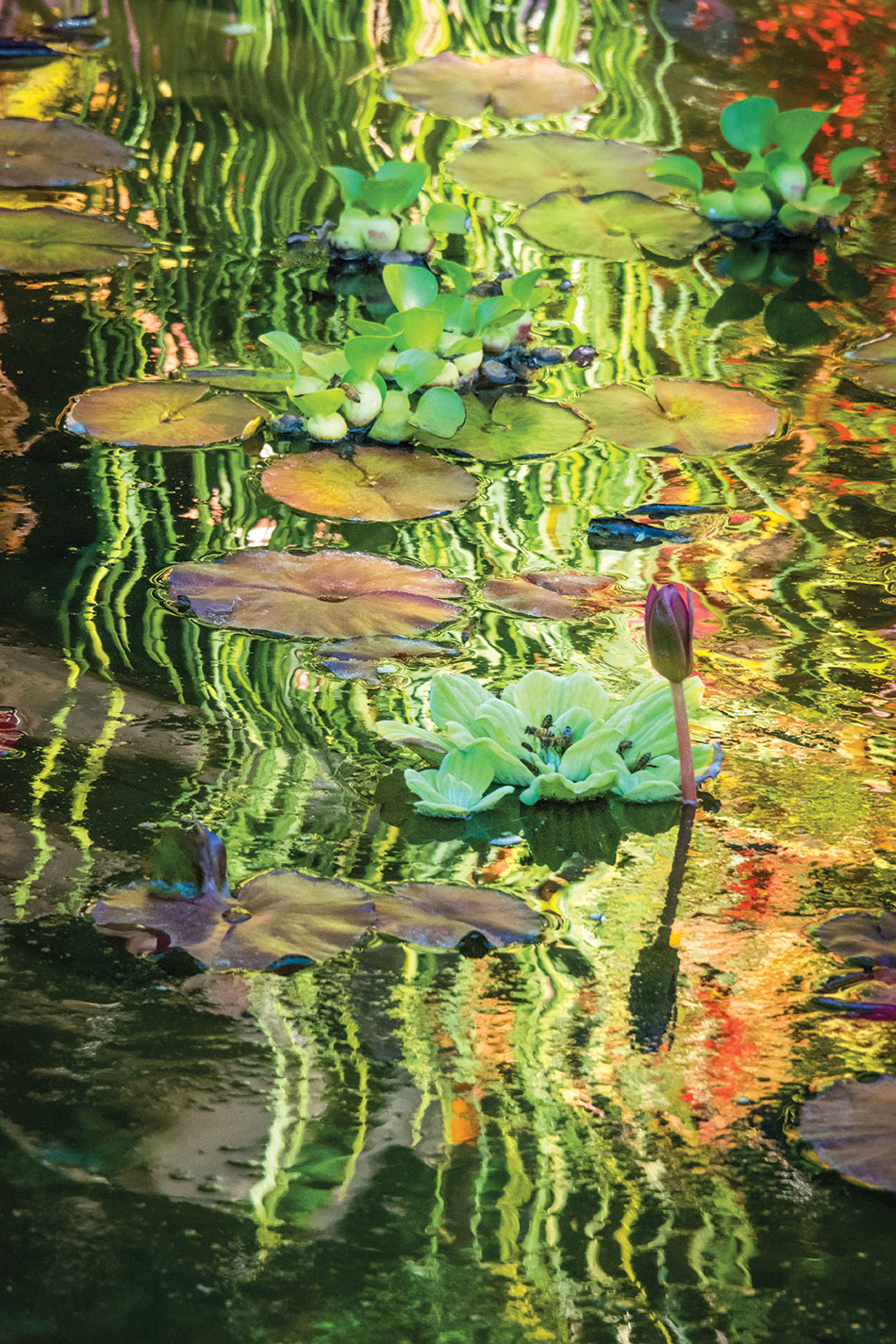 Purple- and pink-flowered water lilies in a shimmering backyard pond.

John Beaudry’s earliest memories often swirl around childhood visits to his neighbor’s garden—a “magical place…full of intrigue” where the Midwest’s dramatic seasons brought renewal in spring, glory in summer and retreat in fall and winter.

“I now see that my experiences [there] were the seeds of my passion for gardening,” says the Chicago-area native of his lifetime avocation and decades-long vocation as a professional horticulturist and landscape designer. “I create outdoor sanctuaries that reconnect people with nature,” he says. “Once people get in touch with its richness and bounty, nature changes them.”

John’s most personal design fills the backyard of the post-World War II ranch home in La Mesa where he and his partner, retired educator Luis Cerda, along with their friend Martin Swank, have lived for four years. In this “Food Forest Sanctuary,” as he calls it, John celebrates the lifeline he found in gardens during his 35-year journey with HIV and his mother’s recent losing battle with Alzheimer’s. “Yes gardens nourish and delight,” the 59-year-old says. “But I know firsthand how they heal and restore.” 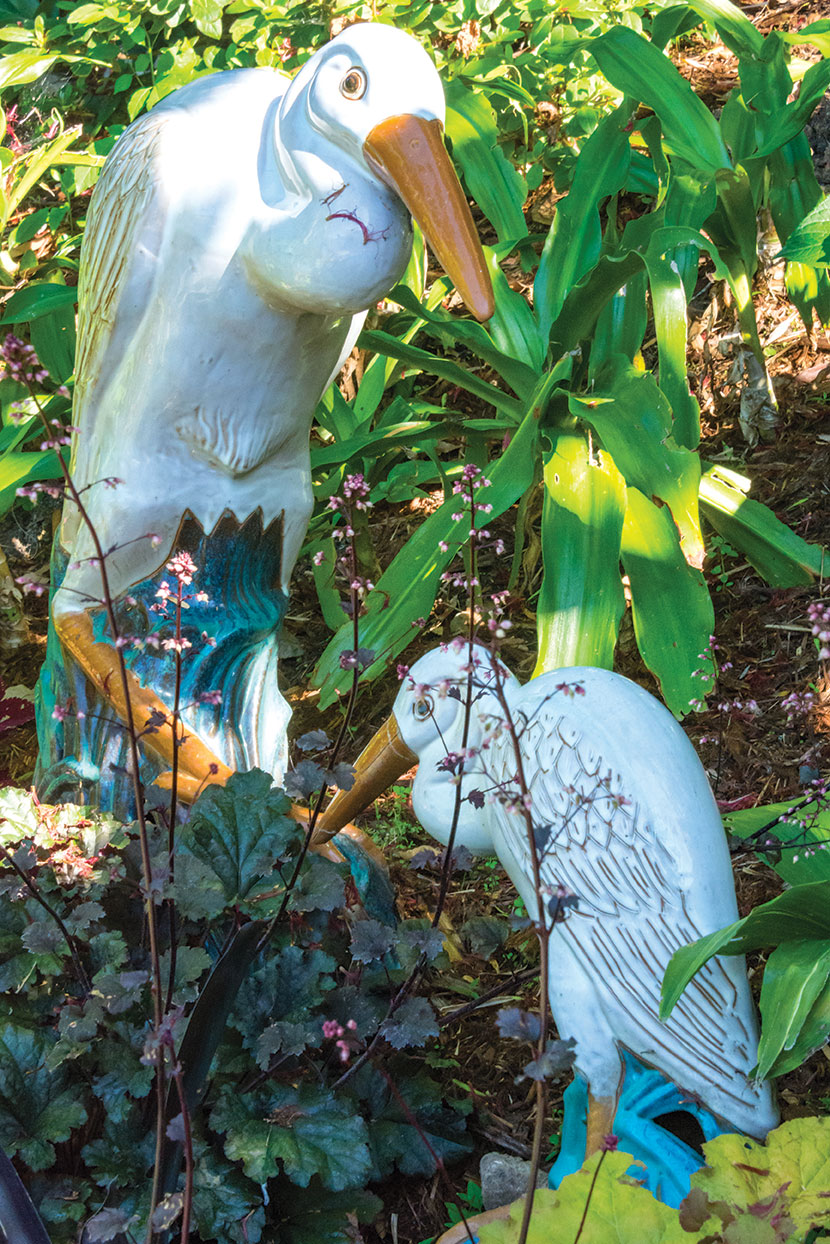 When John and Luis left the Bay Area in 2010, they U-hauled a truckload of greenery over the Grapevine to San Diego. “I have a passion for plants,” John explains with a smile and a shrug. “And when you have that fever you can’t go past a nursery without making a hairpin turn and going back.”

After four years in rentals, the couple worked quickly at their newly purchased home to remove lawn, diseased trees and most of the “industrial” concrete-block wall edging the backyard’s steep slope. A majestic evergreen ash and mature orange, guava, persimmon and pear trees stayed, anchors for the sheltering canopy John envisioned there.

Today, trees, shrubs, vines and edibles intermingle freely in the lush “food forest” that provides fruits, veggies and herbs for family meals; cooling shade when temperatures soar; and a habitat for beneficial insects, birds and other wildlife. In this edible landscape, melon vines cavort among flowering perennials, monarch butterflies feast on milkweed, and sweet mint skirts a citrus grove and 6-foot-tall tomato plants growing in straw bales. “This garden is so alive,” John observes happily. 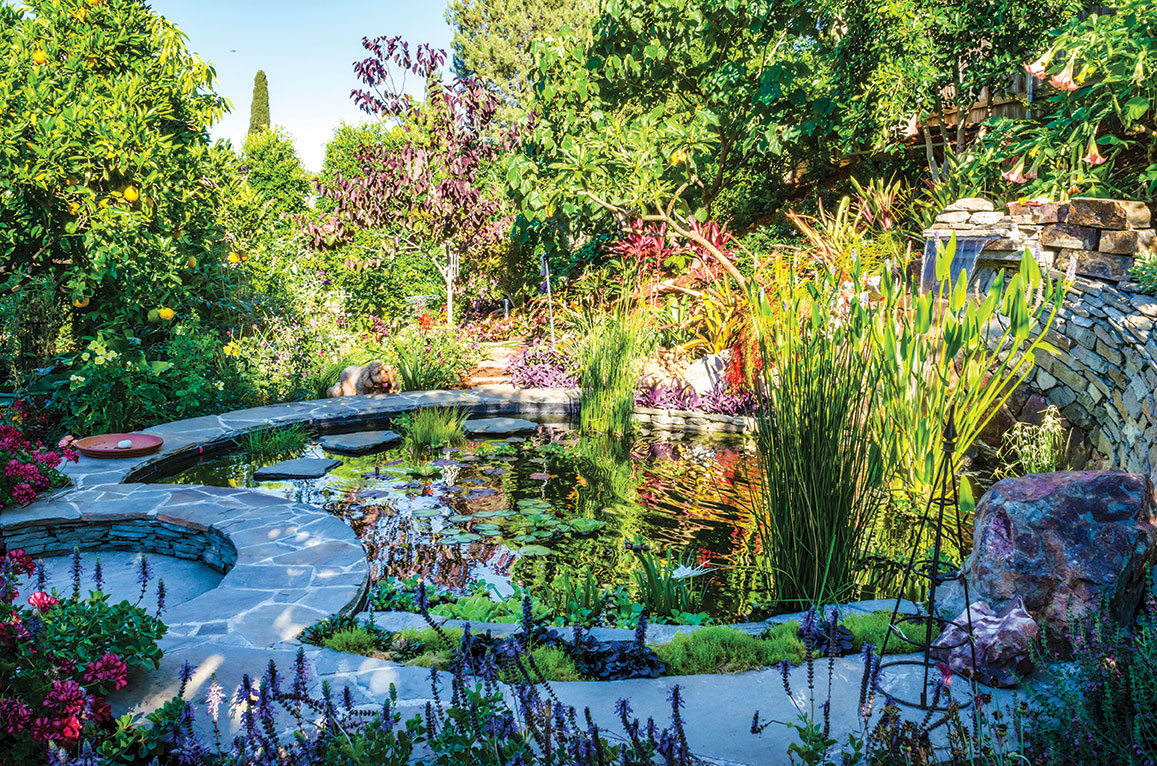 A bluestone-edged pond, inspired by legendary Arts and Crafts-era architect Edward Lutyens, is part of a series of circular garden rooms and features in John’s backyard landscape

Also in the mix are soothing water features, sheltered patios, Japanese maple and orchid collections and plants gleaned from former gardens, friends and job sites. One aged yellow rose, moved several times, blooms above arm-thick canes. Another survivor, a Meyer lemon, was rescued from discards at the Chicago Botanic Garden when John was a senior horticulturist there. Bearded irises along a grassy path were gifts from a fellow plant lover.

One of the garden’s overlapping circular rooms is John’s sanctuary, a quiet patio secluded by a ficus hedge, whispering black bamboo and a colorful border scented by a slender champaca, the tree that’s the source of flowers for the legendary fragrance, Joy, created for Parisian couturier Jean Patou in 1929. John meditates here daily, watched over by a tall statue of Quan Yin, the Buddhist goddess of mercy. Three crouching cranes, with small hanging bells that sound softly, randomly, in the breeze, nestle nearby among a couple of Martin’s favorite Japanese maples. 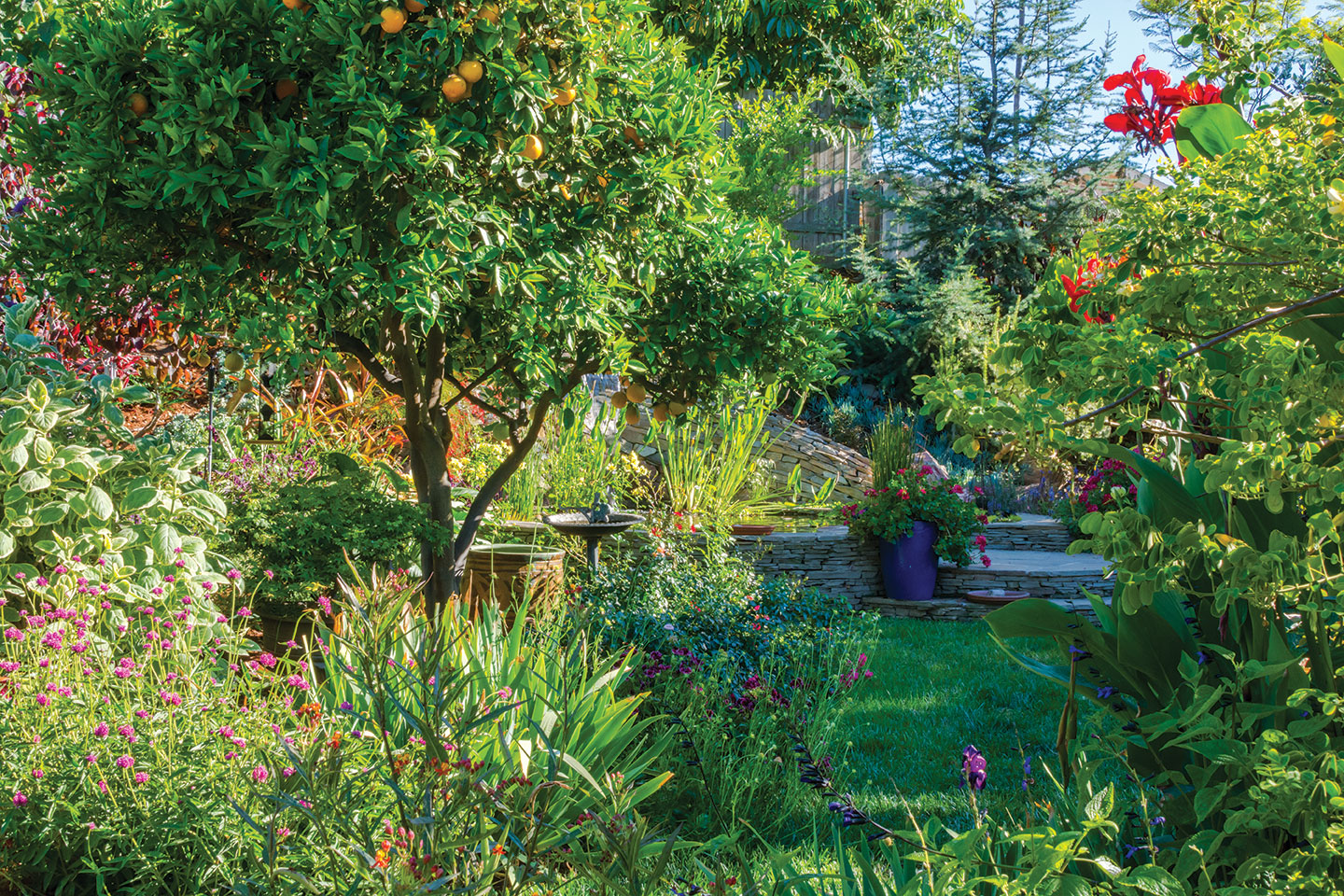 A Valencia orange tree punctuates a colorful perennial border. Among the flowers in the mix of ornamental and edible plants are red cannas and purple globe amaranth.

From here, two paths—one grass, one stone—orbit to a sunny circle of lawn adjacent to the covered flagstone patio outside the home’s dining room. Next to a stand of red cannas there, a bubbling fountain created from a former fire bowl serves as the garden’s “spa,” John says. “We love to watch birds line up for their turn to splash and bathe.” 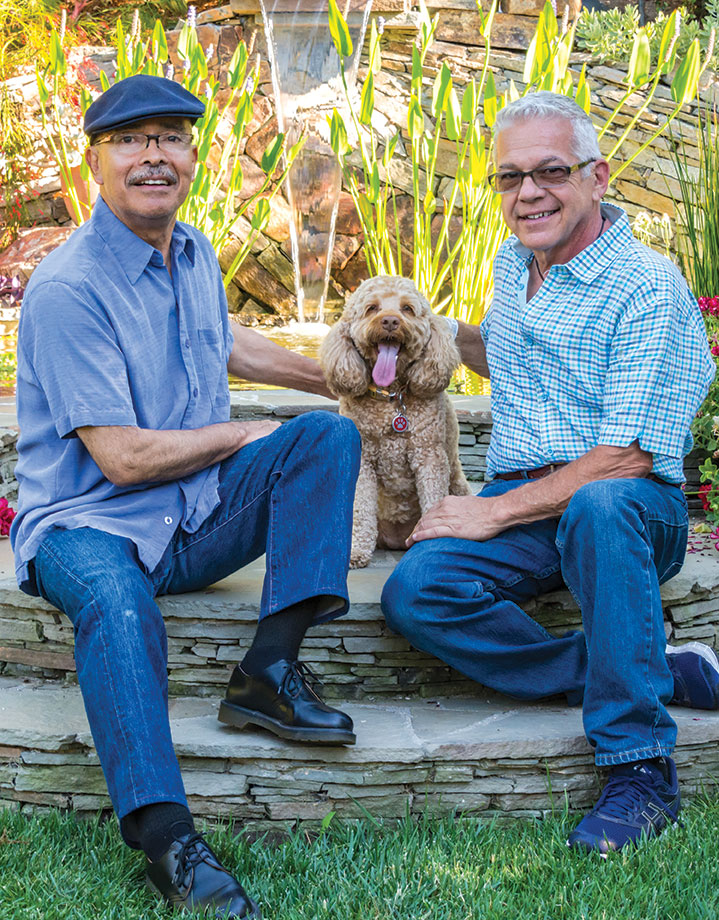 “I love using circles,” John says as he watches goldfish dart around water lilies and other aquatic plants. “They stylize nature and give it crisp lines.”

On the slope above flourishes an eclectic mix of plants, ranging from fragrant plumeria and angel’s trumpet to stiff bromeliads in vases and a languid silver-blue deodar cedar. Nearby, a tall drift of ‘Tropicanna’ cannas with hot-orange flowers and multicolor striped leaves glows when backlit by the setting sun. “I love to design to take advantage of situations like this,” John says. 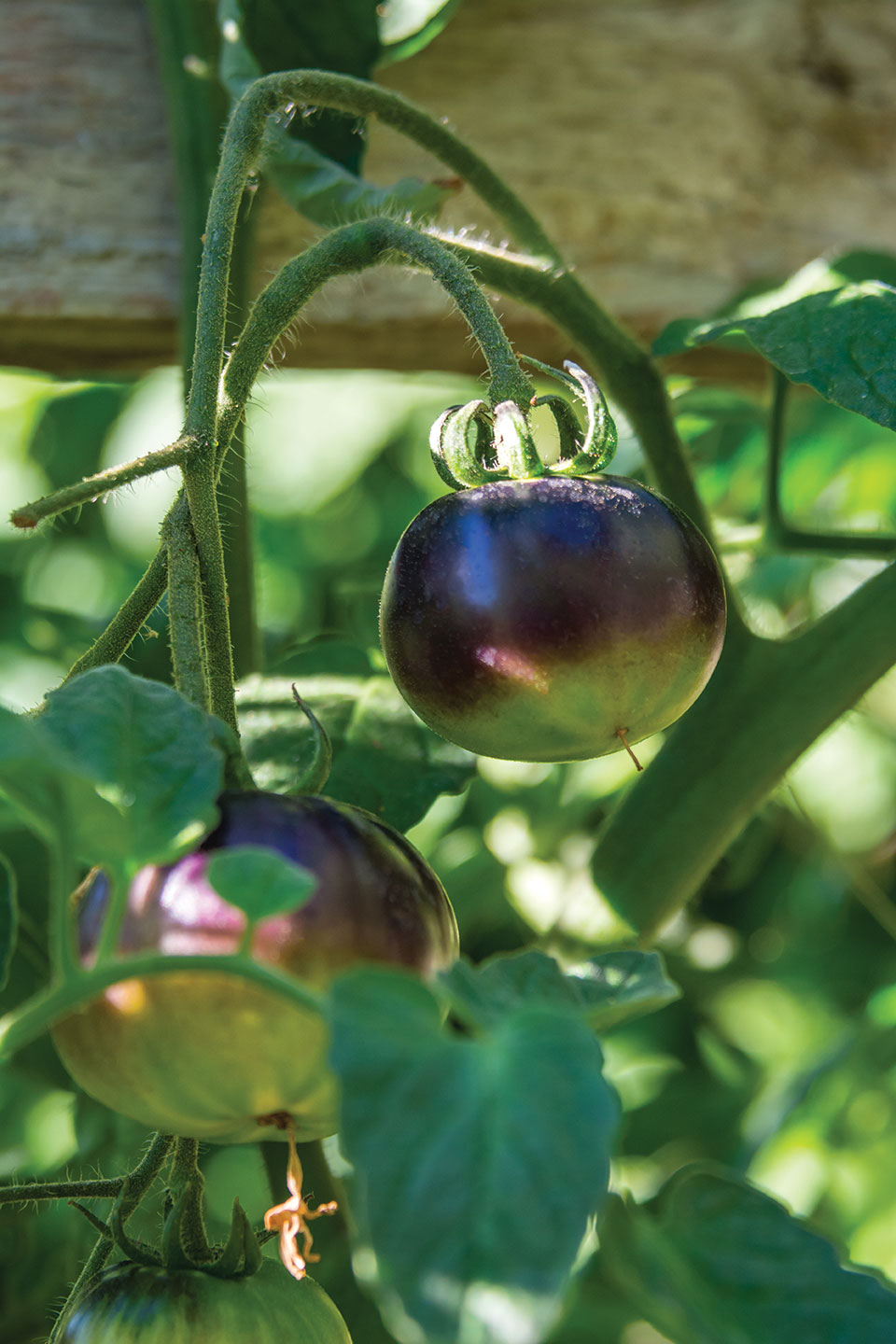 Steps away, John recently added a rock-strewn arroyo to the slope skirting the sego palms and foxtail agave rosettes that were on the property when he moved there. “It’s important to have a mix of rock in a dry stream bed—boulders along the edges and smaller rocks and pebbles in the middle,” he says. “That’s the way they look in nature and nature is always my source.”

In the shade at the yard’s west end, John tends compost piles, nurtures more Japanese maples and houses a potted cymbidium orchid collection beneath a handsome pineapple guava tree. When their flower spikes rise in midwinter, he moves them closer to the house to enjoy their long-lasting white, pink and yellow blooms.

This fall, while promoting his just-published book, Garden Sanctuary, John continues a makeover of the front yard. Part of the backyard will get a facelift too when the trio remodels the kitchen to bring the outside in via new French doors. 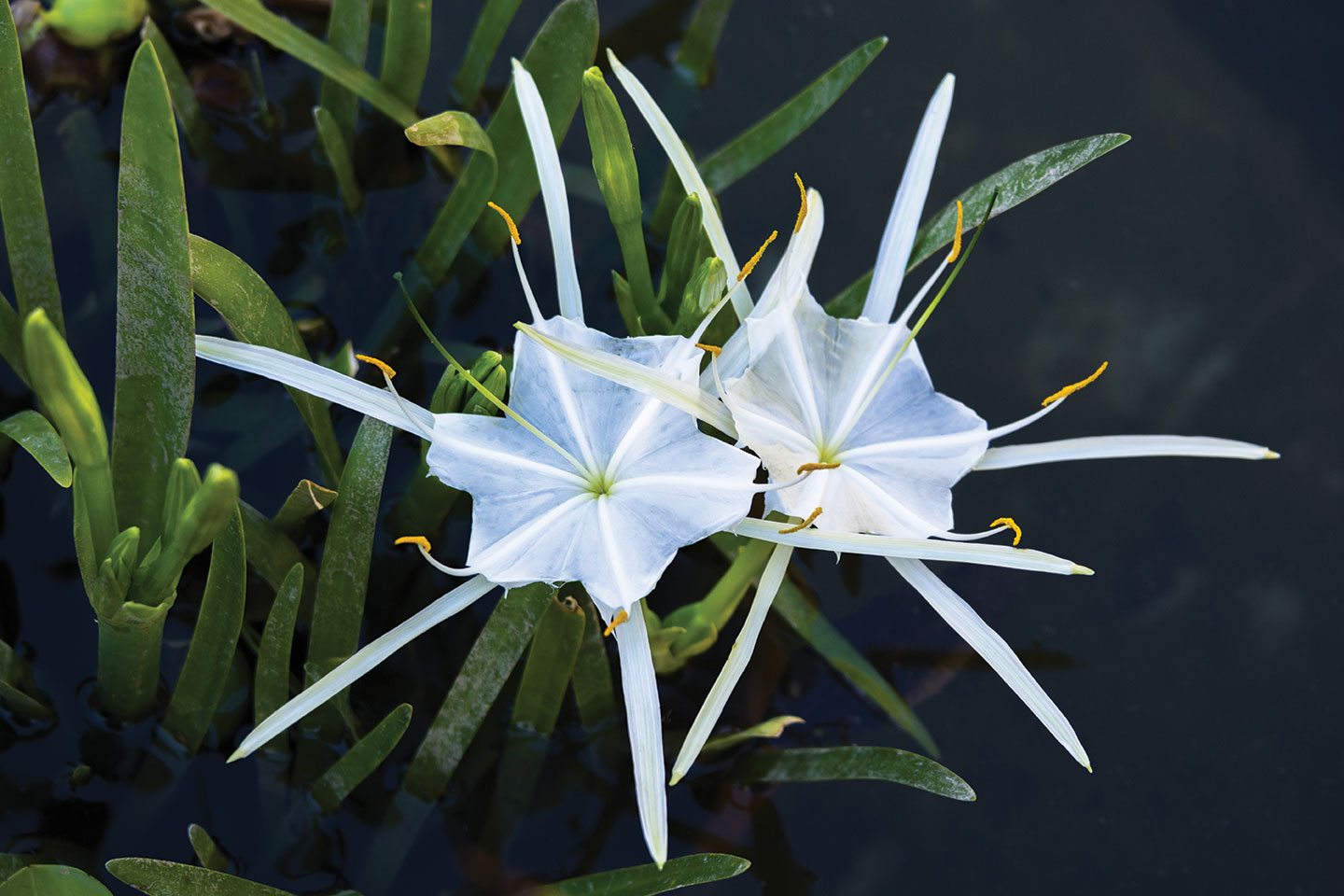