Restaurants To Try This Weekend

From University Avenue to Voltaire Street, San Marcos to downtown 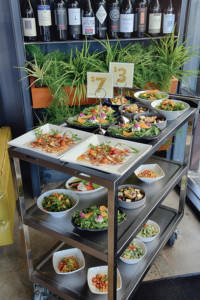 GENERATIONS OF POST-WAR San Diegans learned the words “spaghetti” and “ravioli” at tender ages and repeated them happily at Filippi’s and other family chains of Italian “red sauce” restaurants.

The world has turned recently, and restaurateurs, who board planes in Rome the day before setting up shop in hip neighborhoods like Hillcrest, present menus that read like primers of Italian culinary terms.

Maestoso, a rather zesty and fun place on University Avenue, throws fancy phrases around like breadsticks and specializes in desserts with unruly ingredients.

Chef Marco Maestoso and his partner, Dalila Ercolani, both from Rome, introduce new styles and new concepts under the amusing motto  “Contemporary in Tradition,” which some restaurants would employ as an excuse to cook “whatever we damn please.”

Maestoso promotes such novelties as passagi (“to pass by”), carts laden with small plates that servers ramble around the room in imitation of dim-sum trolleys.

Offerings may be bites of pork in grilled pineapple sauce, prosciutto-wrapped shrimp with beetroot puree, and very nicely, house-made tagliatelle in a fine sauce simmered from four types of tomatoes.

If a pizzaiolo bakes pizzas, at Maestoso a pinsaiolo prepares an antique Roman dough recipe, lets it ferment for at least 100 hours, rolls it into discs called pinsa and bakes them with whatever toppings he damn pleases. 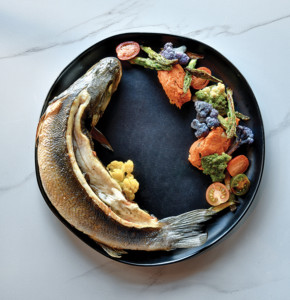 The whole clean branzino there is a house specialty. Photography by Martin Mann

The menu extends to unusual pastas, such familiar entrees as risotto with osso buco, and desserts like the limone, which combines lemon, meringue and the pork cheek called guanciale. I know. So good.

THE WORD “ROYALE” IS SO GRAND

—regal as only French monarchs can be—that it fits enchantingly in the name of Royale! Cocktails & Hamburgers in Ocean Beach.

The Voltaire Street premises have been home to a number of bars, and now house a place that honestly specializes in farm-to-table food and drink. Proprietors Jordan and Mariah Brownwood own an 8-acre, certified organic farm in North County and serve some of their produce in agreeable salads, sandwiches and so forth.

Avocados, wedged into eighths, battered and deep-fried, have an unexpectedly intense flavor. Onion rings are à la carte but necessary adornments for the Royale with cheese, a 1/3-pound patty crowned with bacon, Gruyère, caramelized onions, pickles, the house special sauce and mustard, all  wrapped in a rich buttermilk bun.

Passion fruit and lemons harvested near Valley Center combine in a cocktail called The Mezcal that goes down altogether too easily.

Royale! layers bacon and Gruyère on their signature burger. Photography supplied by Royale!

ARE YOU ANNOYED WHEN…

Having politely asked a server or sales clerk, “And how are you today,” the immediate response is “Thanks for asking”—as if the person were not truly worth the inquiry. This has become so widespread that we imagine managements must be behind it. We prefer unforced sincerity. 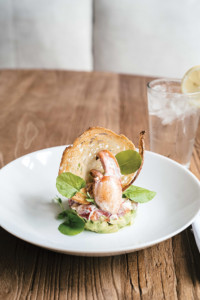 The lobster stack at Prep Kitchen is as pretty as it is tasty. Photography by Jim Sullivan

To the lists of titles such as CFO and CEO, add CCO. In traditional kitchens, the chef always could be identified as the man with the tallest toque. With toques having gone the way of flowers on tables—and wouldn’t it be nice to have them back?—the term chief culinary officer has emerged, and is worn with ease by Prep Kitchen honcho Joe Elevado.

With quite the background, Elevado arrived in time for the opening of the local restaurant group’s fourth location. In an impressive, big city-like campus near UC San Marcos, this Prep Kitchen offers an indoor-outdoor dining area, marble-topped tables, a cheerful staff and a menu that is contemporary without being cloying.

Opening attractions like the lobster “stack” attract with good looks and harmonizing ingredients, in this case avocado, watercress, pickled red onions and remoulade sauce. Entrees have style, too, as in roasted free-range chicken with grain-mustard jus, and a petit filet sizzling under a pungent horseradish glaze.

Crash against the wall that separates the kitchen from the ground-floor alleys at Punch Bowl Social, downtown San Diego’s warehouse-sized answer to any kind of boredom.

It looks sedate from outside, where it faces the back of the SDPD headquarters from across E Street, but inside, it’s a maelstrom of fun for everyone, with a roster of games that stretches out forever, karaoke, every beverage imaginable and a 21-and-up policy that commences nightly at 10 p.m.

There’s a big, Mexico-influenced menu that families and groups seem to enjoy, but it’s not the primary attraction.