Tips for Hanging Up

Framed and Hung (Artwork, not people) 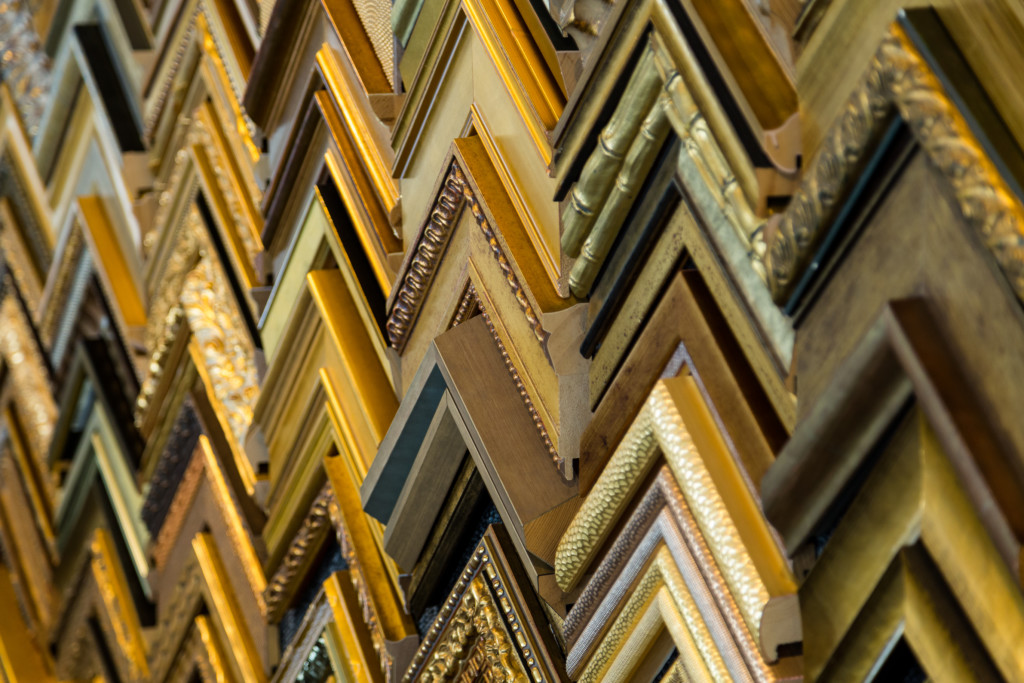 When I moved from a two-bedroom home in Golden Hill to a three-bedroom home in the College Area, a lot of artwork and photographs needed to be taken down, rearranged and rehung. I left the hanging up and arranging to my son because, even with the tips on hanging wall art that follow, I’m one of those people who can’t draw a straight line with a ruler. (I blame it on being lefthanded—which is, of course, the reason for all of my klutziness.)

I cherish most of the art and photos I have because many are gifts from gifted friends who have painted or photographed people I love and places dear to my heart. As my son nailed and hammered, with me cheering on from the sidelines, I began to notice the different types of frames my friends had chosen and how they worked (or didn’t work) wrapped around the pieces they were showcasing.

Most of my pals opted for gold or silver. Joe, my wasband (I wish I could say I was the clever one who coined that word, but I heard it somewhere and stole it—don’t you just love it?) went with a tiered gold frame for a painting by Richard DeRosset of my dad, mom, sister and I waving goodbye to the Netherlands from the deck of the Maasdam.

The painting, which Joe gave to me as a wedding present, is almost as big as the ship, so it was a no-brainer as far as placement went. It got hung, all by its lonesome, on the biggest wall in the house.

Joe also went with gold for a frame on a photo he took and had turned into a Monet-like painting of our two kids in full Dutch costume in front of Balboa Park’s lily pond. Given to me 20 years after our wedding vows, that present was meant to wow my family—not me—who were visiting to celebrate my 50th birthday.

It is pretty impressive, but the frame is a bit too-too with over-the-top decorative edging. It looks like it belongs in somebody’s grandmother’s house—oh, wait. At 63, I could be a grandmother.

At any rate, the frame isn’t the reason I left the painting hiding behind my bedroom chair. It’s more the misery that’s not hiding on my daughter’s face. At 14, no girl wants to be traipsed around all day in front of a million tourists, clomping about in wooden shoes and wearing a silly coned hat, even if it is lacy. The promise of ice cream may have worked on my 10-year-old son, but not on my not-so-little-anymore girl.

I would have opted for a gold frame on the still-life of peppers that Laura Grantham (if you recognize the name, it’s because she was once art director at this magazine) painted and eventually gave me after I finally convinced her that, yes, I really did like and want it.

The yellows, oranges, reds and greens are a perfect fit in my kitchen and the silver frame she chose makes those colors pop. Gold (what do I know?) would not have done the work justice.

Some frames are barely there. I have a blue Holland travel poster by my bed featuring—guess what?—windmills, that’s perfect in a thin-as-air silver frame. Emily Jones (our present art director) chose a skinny black frame for a Blair Thornley illustration of a girl sitting at her desk, pen in hand, dreaming of the next word to write on the page (just like me!). That got proper placement next to my desk and computer at home.

Above the desk, also in a black frame, is a black-and-white photograph taken by my since-grade-school girlfriend of snowy railroad tracks leading to Carleton University in Ottawa , Ontario, Canada—the city where I grew up.

I love the mystery of where the tracks may lead beyond the image but I hung the photo in a prominent place to remind me that, no, I don’t want to retire in Canada because, even though the snow looks intriguing, snow means cold weather and I hate cold weather. Brrr and bah humbug.

A polar opposite frame—white—was picture perfect for a photo, by Los Angeles Times photographer Bob Grieser, of an Old San Juan street featuring the glorious bright hues of buildings in Puerto Rico, where he, his wife Georgia and I vacationed not too long before he passed away.

I was surprised to note that there only is one wood frame in my entire art “collection,” which is on a painting of a trumpet vine done by my long-time friend Grace Swanson. She has since taken her talents from the brush to the knife. No, she’s not a creative surgeon. She’s a gourd artist.

Trite seemed just right for a frame featuring anchors, oars, buoys and lanterns, which holds a photo of my then 3-year-old son, dressed in full pirate regalia, at the helm of the tall ship, Lady Washington. But I prefer the elegance of the emerald green frame, edged in gold, that my parents chose for a professional, in-studio shot of the four of us (my parents, my sister and I) that was our farewell present to the loved ones we left behind in the Netherlands when we immigrated to Canada in the late ’50s.

Another favorite frame is … no frame. I love the modern look of the poster-sized photo of our cat, Cowboy, without any frame at all. But the best-of-the-best frame is the one my son made in kindergarten out of popsicle sticks. The colors he painted them are faded now, but his 5-year-old smile beams on.

I was lucky that my son helped hang my artwork but someday he is going to move out. I will move again and he won’t be there to help me. So, I wrote down what I learned from our hanging session, and then input it here because I have a tendency to lose bits of paper with information on them. Maybe you’ll find it useful too.

Tips for Hanging Up
(Artwork, not phones) 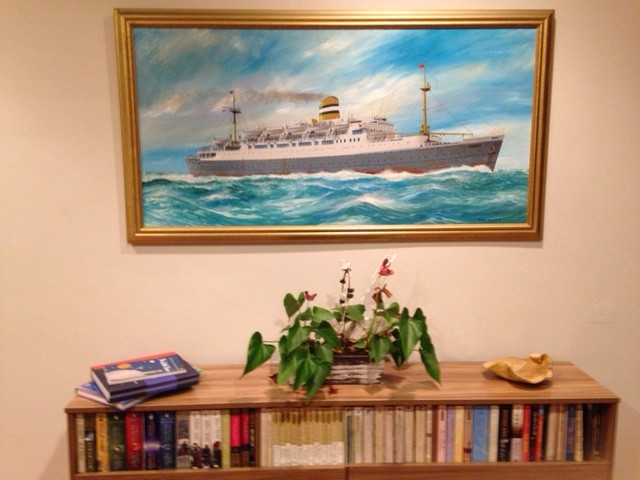 Gauge, Then Hammer
Other than the Maasdam ship painting, which only fit on one wall in the house, my son assessed what we had on hand that we wanted to display (i.e. not the gaudily framed Monet-like photo painting of the kids) before he started putting holes in the walls. The still-life peppers made sense in the kitchen because of their subject matter. The Dutch travel poster and the colorful Puerto Rico photo had something in common and looked good hung next to each other. He chose my bedroom for those because their colors popped against the purple-painted wall I inherited. (Hmmm, maybe that’s what’s keeping me awake at night.)

Inches Between
Two turned out to be the magic number for inches between artworks. Holland is only 2 inches away from Puerto Rico in my bedroom (or is that in my dreams?).

Inches Above|
My son is tall; I’m short. So there was this constant, “That’s too high” coming from me versus, “Now it’s way too low” coming from him. Our solution was to use the furniture line as a benchmark and we (um, he) hung pieces about 7 inches above the backs of sofas and chairs. That actually worked well in that it made the artwork and furniture seem to relate to each other.

Delicate Flower
We put Grace’s trumpet-vine flower where the “sun don’t shine,” i.e. our windowless hallway. It’s a watercolor, which is a sensitive medium, and we didn’t want the brilliant yellow bloom to fade.

Well Moored
When hanging the oversized Maasdam ship painting, we centered a console underneath it to help anchor (!) it to the room. Without the furniture piece, the artwork would just seem like it was floating (!) on the wall.

Group Display
We have one fun gallery wall in the garage, which we created by laying everything on the floor first. We measured the wall and then framed the floor with painter’s tape to match those measurements. I like symmetry, so we just kept moving the pieces around until we had a balanced grouping. We ended up with a lime-green circular clock next to a vertical photo of an orange chrysanthemum and a horizontal shot of a colorful Puerto Rican mask and then, for scale, height and balance, we used a full-length mirror.

Nailing It
Even though my son did most of the work, I did have a job to do: hold the artwork in place while he made a teeny dot with a pencil at the center of the frame’s top. Then he measured down from the dot to however far the two hangers on the back of the art were from the top of the frame. Then he measured the width between the hangers to find out where on the wall to nail the picture hooks. Pictures with wires were a little tougher to figure out depending on the tautness of the wire, but he used two picture hooks, not one, placed at either end of the frame to keep the art from swinging.