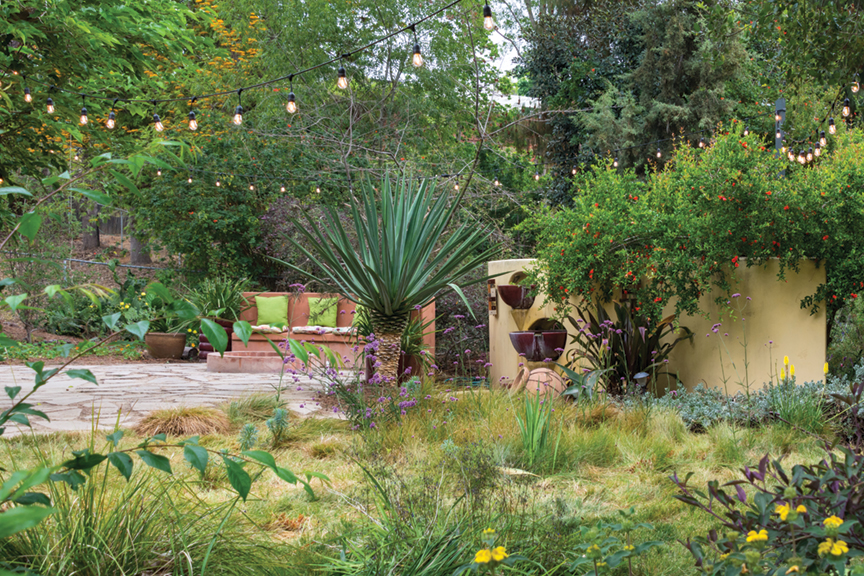 A broad swath of lawn in Nan Sterman’s Olivenhain backyard was replaced with a meadow of California field sedge and a patio with built-in seating and fire pit. “Both are used far more than the lawn ever was,” she says.

The fixer-upper Nan Sterman and her scientist husband Curt Wittenberg bought in the early 1990s was a stretch for the young couple with a toddler son and a baby girl on the way. But the sloped 2/3-acre corner lot at the end of a quiet Olivenhain street was a blank canvas for a garden—the first Nan would call her own.

Even back then, the tireless advocate for sustainability, in-demand landscape designer and host of the Emmy-winning public TV series A Growing Passion wanted “to create the most beautiful garden that would use the least amount of water,” she writes in her new book Hot Color, Dry Garden. 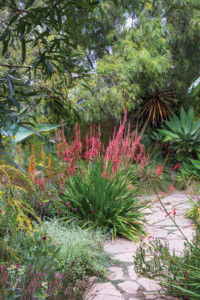 Patios and pathways like this one are crafted from recycled broken concrete. “When we started the garden in the 1990s, we couldn’t afford flagstone,” Nan recalls.

Around her new home, her favorite aloes, agaves and other succulents would mix with colorful California natives and rarities from Australia, South Africa and other areas of the world with Mediterranean climates like ours.

Lawn? “No way,” the California native says of thirsty turf. But pleas for a kids’ play area won out and grass circled with a decomposed granite path grew for years just outside the shade of a towering Torrey pine and mulberry tree in the backyard. “The kids never played on it,” she recalls. “They just raced their Big Wheels around it. I was itching to get rid of it when one day my son asked, ‘Mom why do we have a lawn?’ No one had a good answer. That was the end of the lawn.”

Today, part of that flat expanse is a silky circle of California field sedge (Carex praegracilis), often touted as a lawn substitute but used by Nan for a swaying meadow studded with seasonal bulbs. It laps against a patio embraced by built-in curved seating in warm adobe and a contrasting concave wall in sunny gold where water trickles into three wide oxblood bowls.

Behind them, shade, native and desert gardens add more bursts of flower and foliage color, though many now are watered only by annual rainfall. 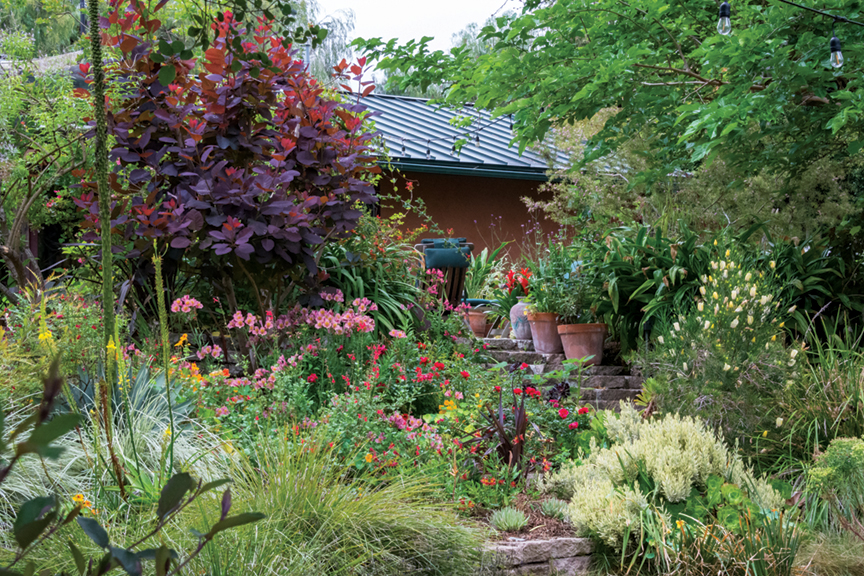 A burgundy-leaf smoke tree announces the backyard’s sloped border where alstroemeria, carpet roses and other flowers mix with showy grasses and yellow-flowered Bulbine latifolia, a succulent. Across the stairs is an unusual Australian hibiscus (Alyogyne hakeifolia) with yellow flowers.

This bold beauty embodies Nan’s vision for her garden—and gardens she designs around the county. “We’re creating a new iconic California landscape,” she explains as she and other garden pros adjust to on-going drought and climate change. “I call it mixed Mediterranean and it fits our environment and lifestyle. The plants and colors are perfect foils for each other.” 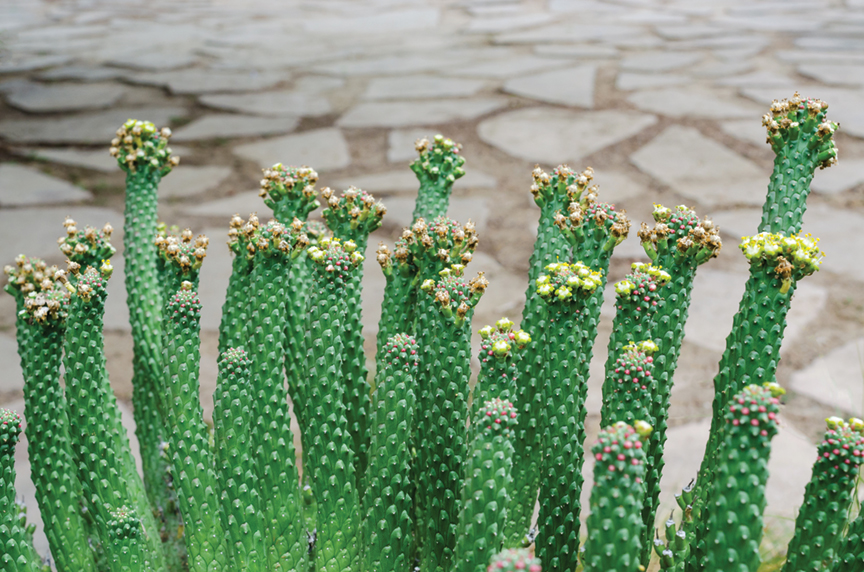 An unusual Euphorbia flanaganii with its many snake-like branches often is called Medusa’s head.

That aesthetic evolved over the years as her Olivenhain garden slowly came to life. One turning point was a 1996 wildfire that roared close by, prompting Nan and Curt to replace shakes with green metal roofing and to restucco the house.  “Rather than keep the bland white, I picked rich terra-cotta,” she recalls. “I love playing with intense colors in the garden, layering and mixing them. But even the brightest colors look lackluster against white walls. I can’t imagine this garden without that backdrop.” 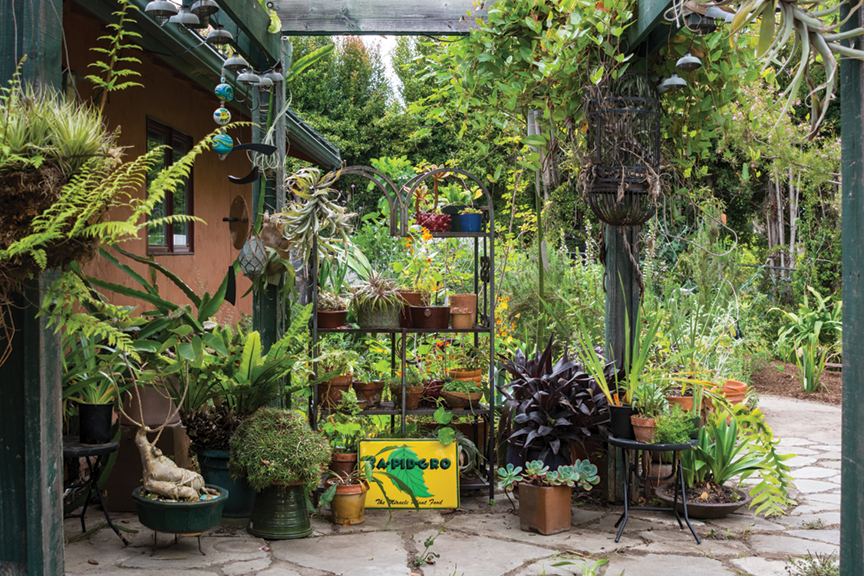 Nan collects handmade ceramics, matches them with specialty plants and displays them on these metal shelves.

By early 2000, paths and patios of recycled concrete—“We couldn’t afford flagstone,” Nan says of the now chic choice—were in place. So were herb and edibles gardens and an orchard where citrus, figs, apples and cherries grow.

In the backyard, carefully planned plots showcased many unusual mail-ordered perennials. But after a couple of years, some succumbed to the dry conditions while others became overgrown, turning the stepped mixed border into a jungle. “I was gardening based on what I read, but it wasn’t working,” she says as she reassessed and replanted. “I finally realized so much of the information out there didn’t apply here.” 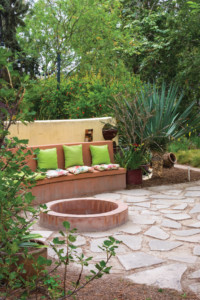 Mesquite and sycamore trees shelter a patio where Nan and Curt often entertain.

Arranging them into a garden proved daunting, Nan admits. “I lost my nerve,” she says. “So I called my friend Scott Spencer.” The consultation with the Fallbrook landscape designer became a collaboration. “One of the first things we did was go shopping for more plants,” she says with a laugh.

Today the centerpiece of the water-wise garden they created is a lacy ‘Desert Museum’ palo verde that rains yellow blossoms in spring around the succulents at its feet. “I think it was the first one planted in San Diego,” she says of the now popular green-trunked tree. 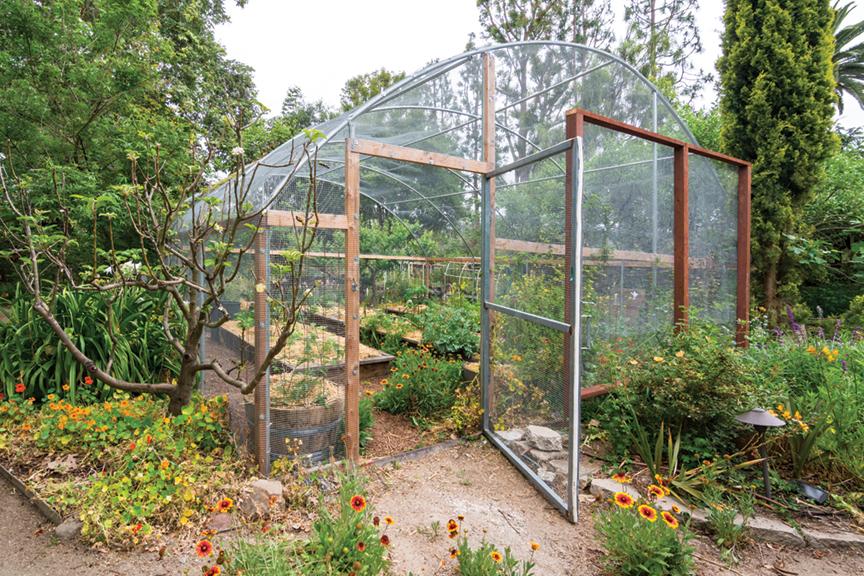 Nearby is a tall weeping Schotia brachypetla, a rare African native dotted with carmine flower clusters in spring, and a smoke tree, with deep burgundy leaves that glow red in fall. Between them the swollen trunk of a Queensland bottle tree rises. “When the leaves drop, suddenly you see all the rusty red new leaves,” Nan says. “It’s stunning.” 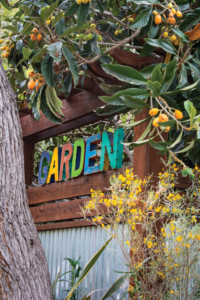 A loquat tree, planted from seed two decades ago, stands outside the entry to Nan’s lower garden, announced with a colorful painted metal sign.

Beneath the trees, swaths of bold sapphire blue flowers blossom on silvery germander sages, one of many favorites from this garden listed in the extensive Plant Directory in her new book.

Pausing on a sunny morning, Nan is pleased with the garden “done on a shoestring with lofty goals.” But she’s hardly finished. In the front and backyards, plant introductions are constantly trialed, plans are afoot to replace the mulberry tree and a new mesh-covered hoop house now critter-proofs the edibles garden.

Steps from the front door, a spindly, just-planted rainbow eucalyptus promises eye-popping neon red, pink and blue on its trunk in the future.

“This is a working garden,” she says. “It’s a laboratory and it’s always changing. And I think it proves without a doubt that dry doesn’t mean drab.” We couldn’t agree more. 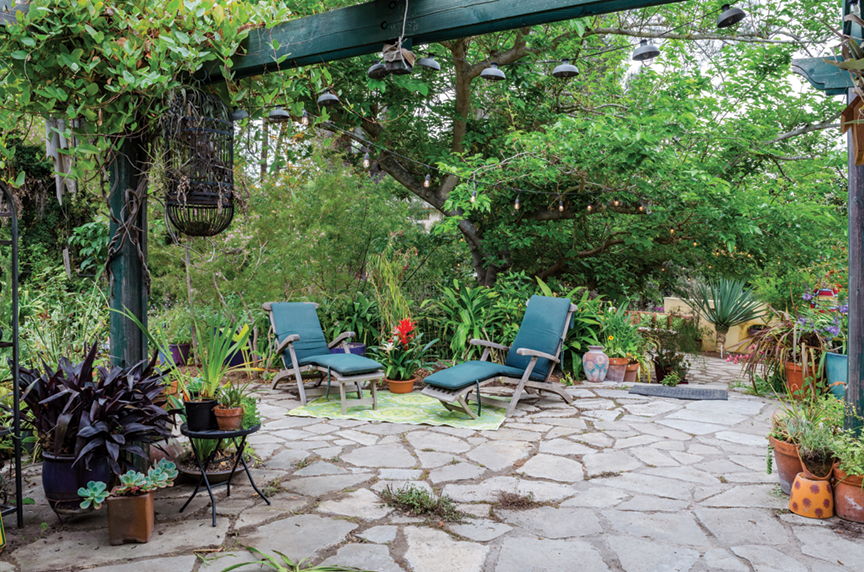 Teak steamer chairs provide a lounging spot during the day and at night when illumination from string lights merges with the twinkling stars above. Hauling companies working in demolition sites nearby the house were happy to bring loads of broken concrete for Nan’s patio, which was set almost a quarter century ago. Plants in the cracks are oregano and Scilla peruviana bulbs.